El Nido was one of the two places I was looking forward to the most on my Philippines trip (the other one was Boracay), as everyone who had been there was raving about the unspoiled beauty of the deserted islands off the coast of Palawan, the island El Nido is located on. 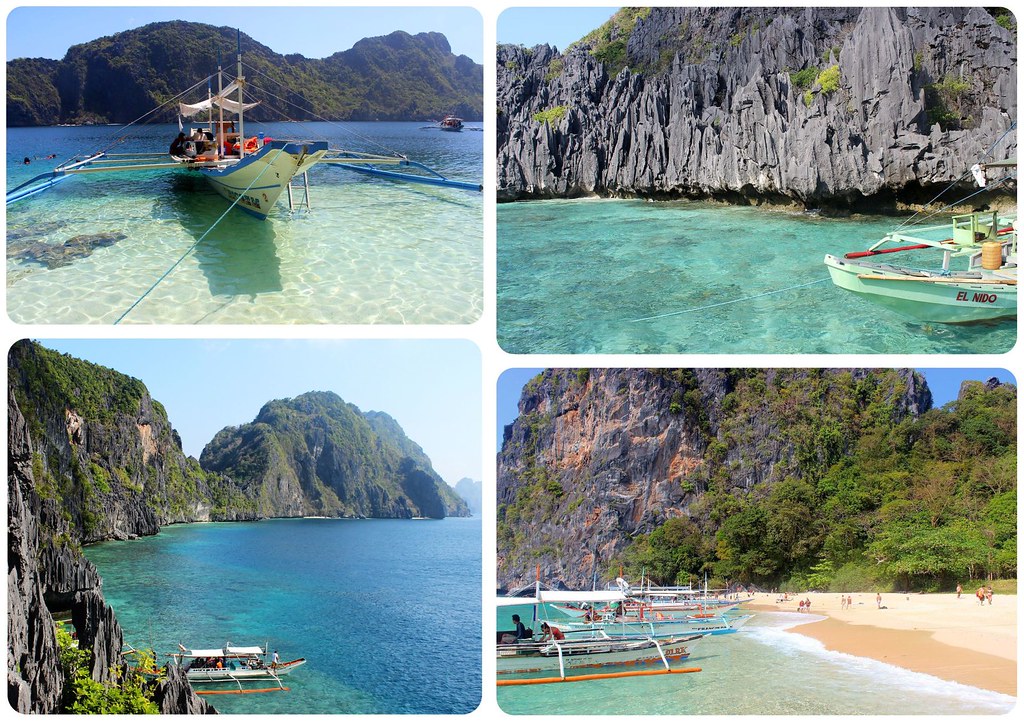 As I was holding on for my dear life in the van that took me up to El Nido from Puerto Princesa, Palawan’s main airport, I was praying that it would live up to my high expectations, but since Palawan had recently been declared the most beautiful island in the world, I was pretty confident that it wouldn’t disappoint. 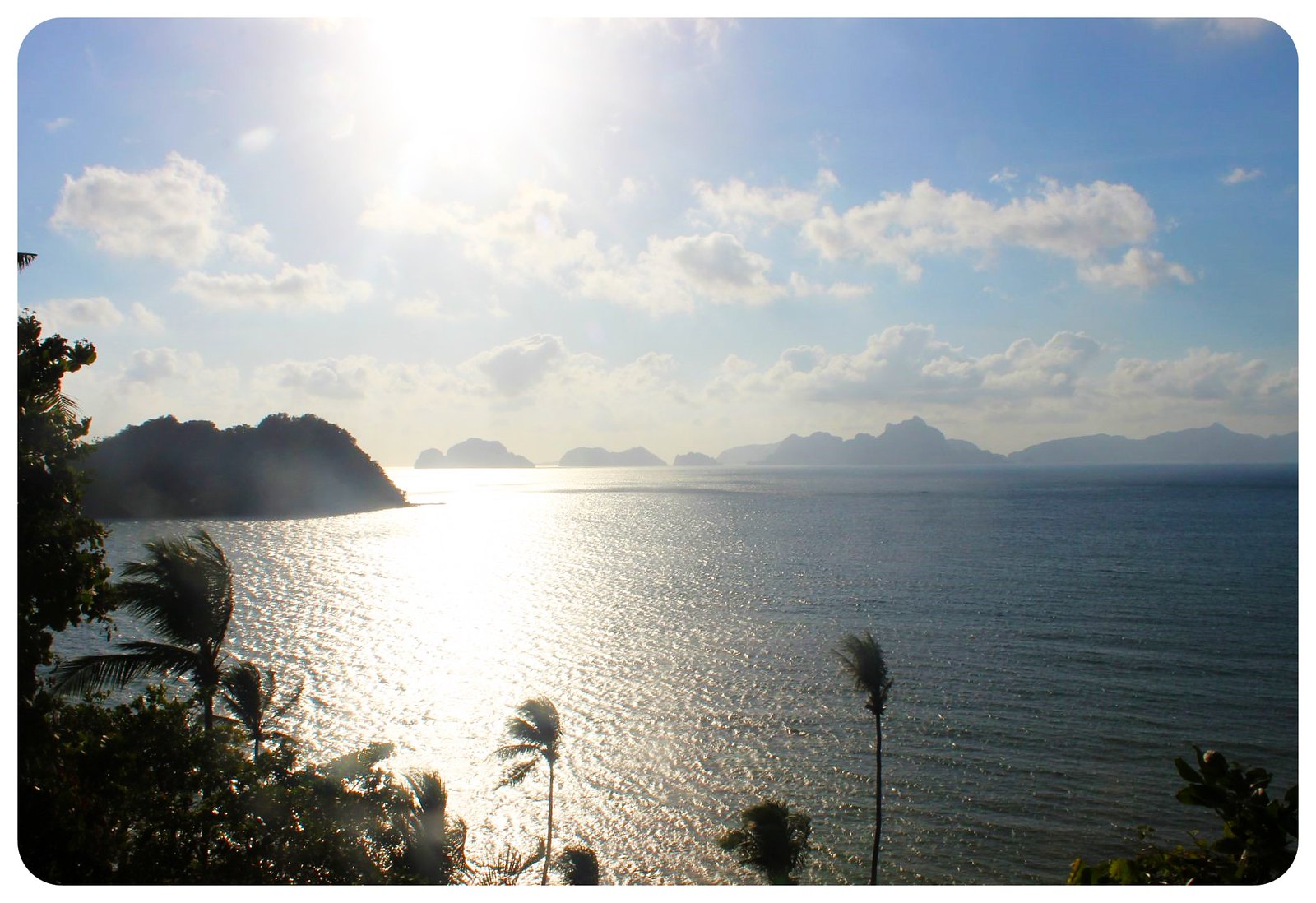 When I booked my flight to Puerto Princesa, I wasn’t aware that it would take another 5-6 hours to get to El Nido from the airport, which would make this a 16-hour travel day starting in Dumaguete 6am in the morning and reaching El Nido 9pm at night. The hours in the van were some of the most horrible driving I’ve experienced so far, even beating the van driver from Laos to Chiang Mai who fell asleep halfway through, forcing one of us passengers to take over the wheel. 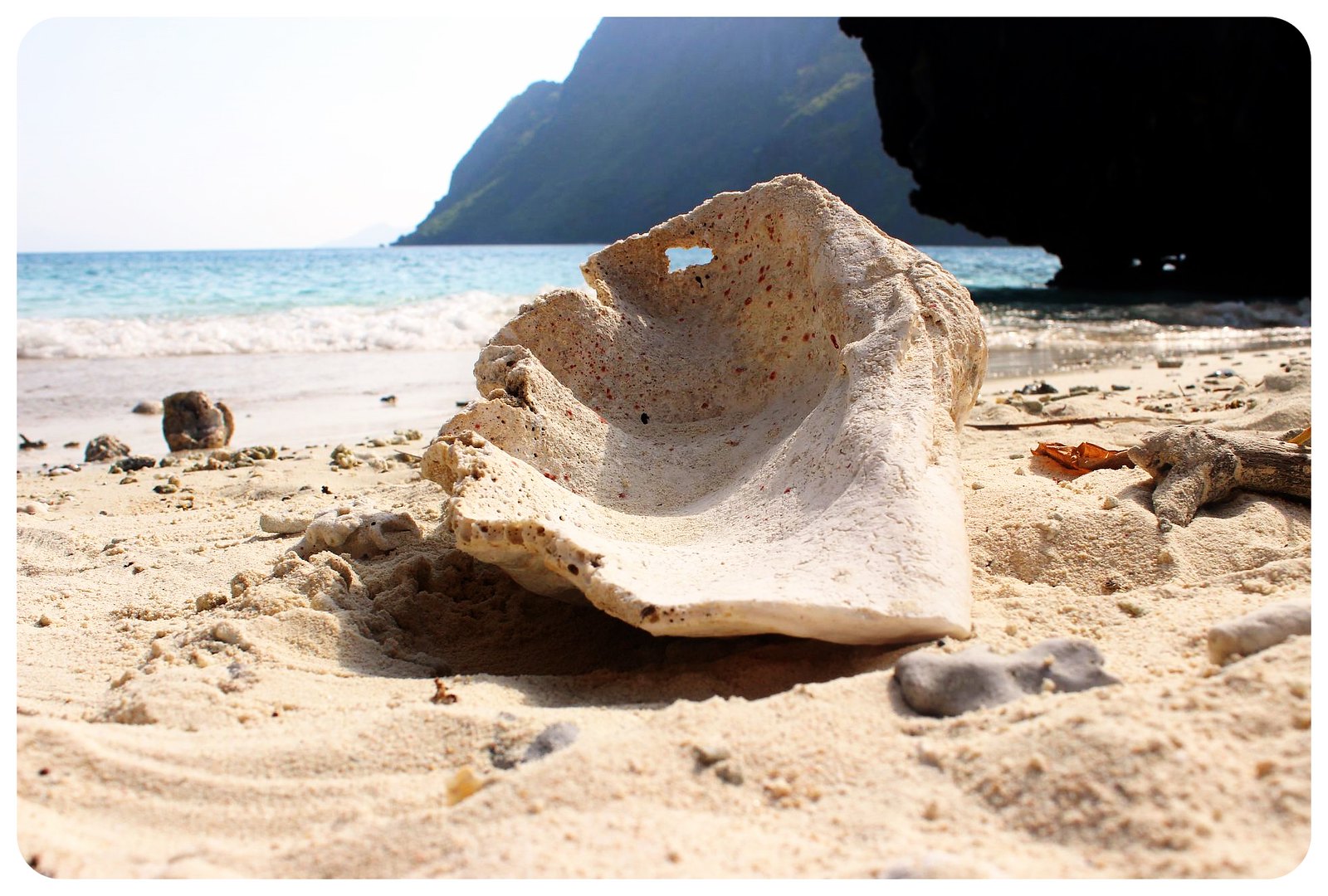 This driver surely saw the narrow winding mountain roads of Palawan as his own personal race track, and several times when he accelerated before a sharp turn I was convinced we’d shoot over the guardrail into the woods. 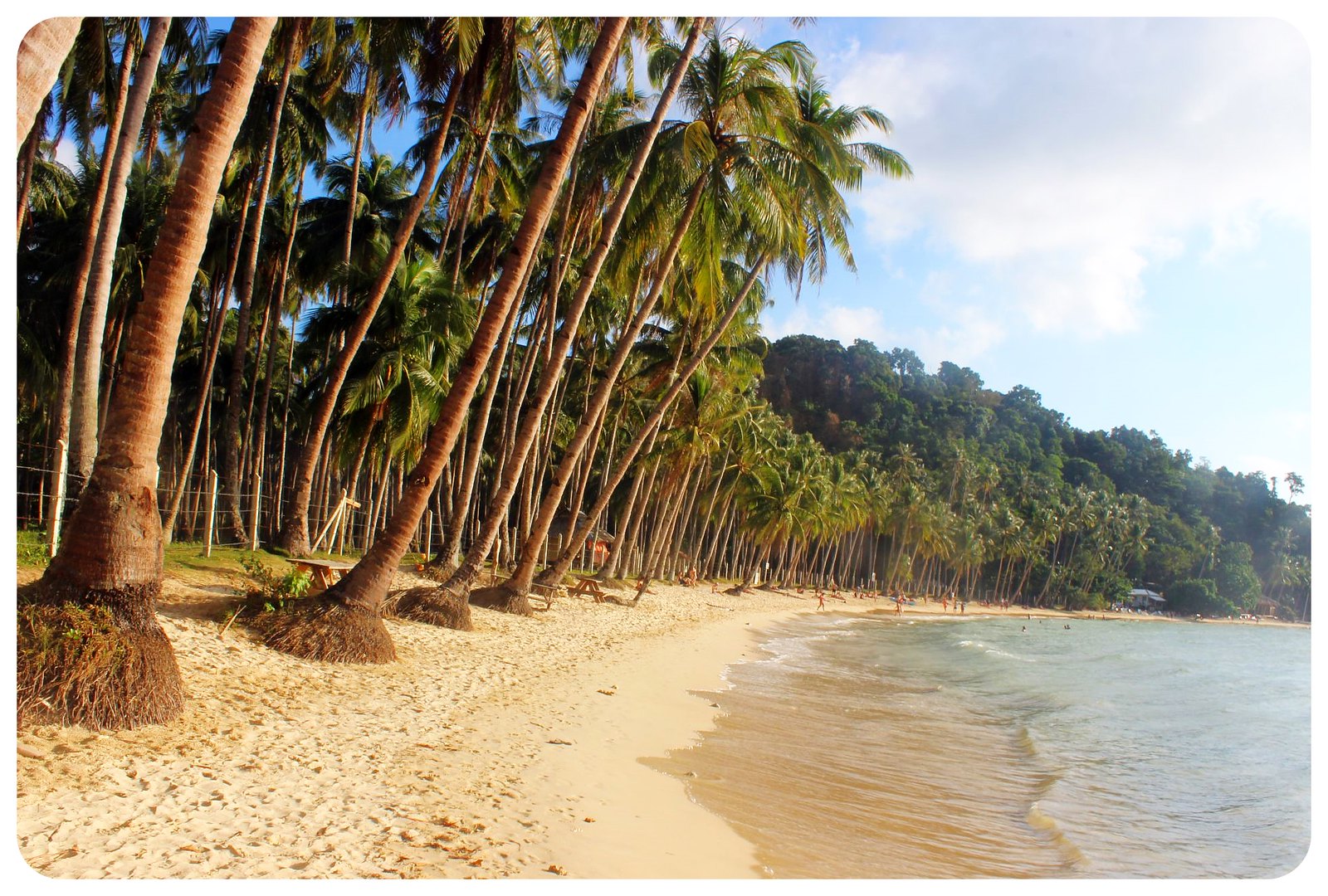 Against all odds we made it to el Nido alive, and I realized mistake #2: not booking a hostel in advance. My driver took me to a number of places, all of which were full, and just when I was about to give up hope and thought I would have to spend the night on the beach, I lucked out and got the last single room in a hostel. 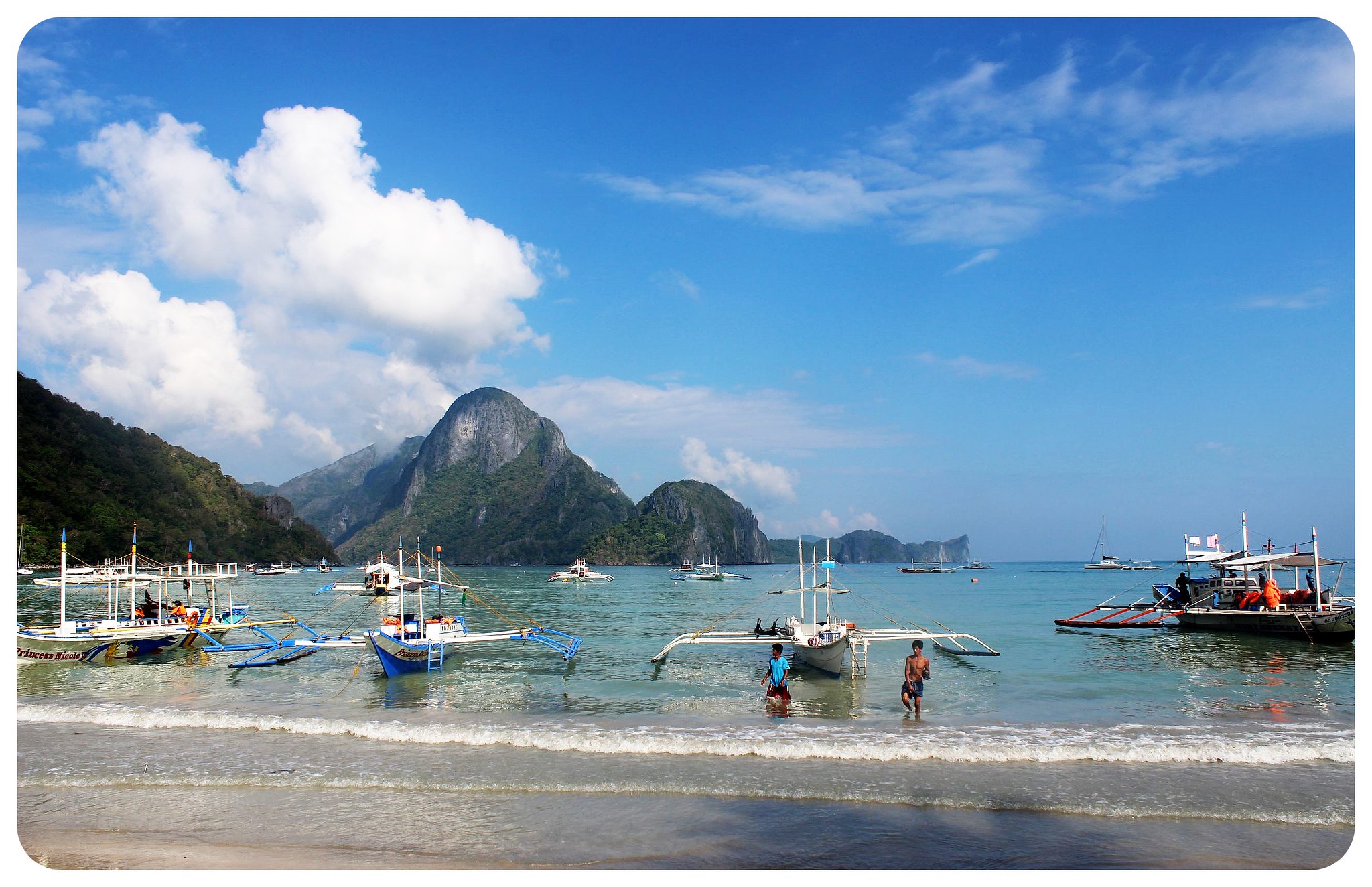 When I went to explore the town the next morning, I wasn’t all too impressed, to be honest. The beach seemed dirty, and while others might find the ramshackle buildings charming, I just found them.. ugly. 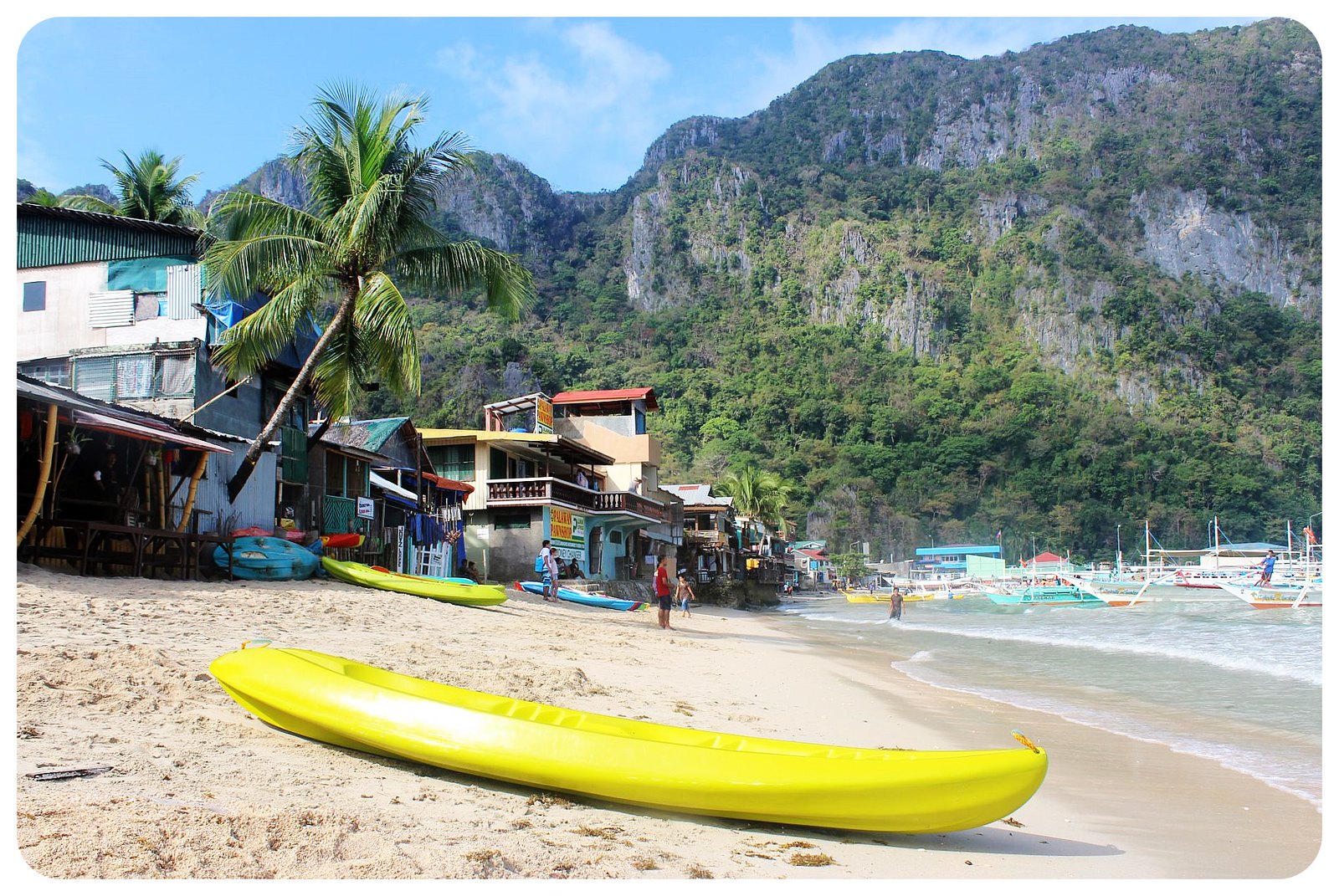 But nobody comes to El Nido for the town. People come here for the Bacuit Archipelago. The archipelago is made of 45 islets, most of them nothing more than limestone karst cliff outcrops surrounded by crystal clear water, some of them boasting secret beaches or hidden lagoons. What all of them have in common is that they offer some of the best snorkeling in the country. 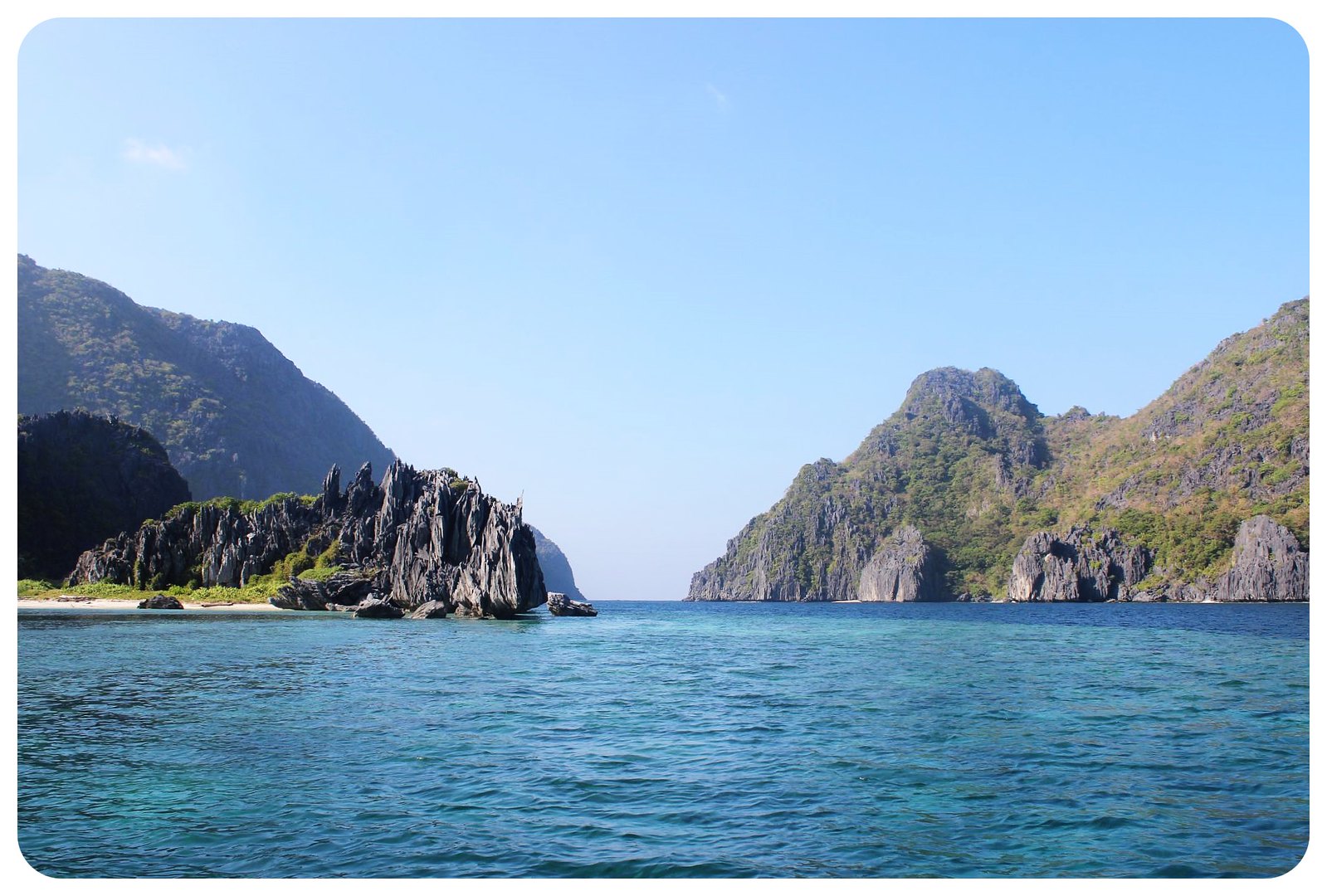 The best way to see as many of them as possible? Go on an island hopping tour. There are four different tours which can be booked just about anywhere in town, creatively titled Tour A, B, C and D. The tours are all pretty similar: the boats leave El Nido around 9am and get back around 5pm, include a lunch and 4 to 5 snorkeling stops. 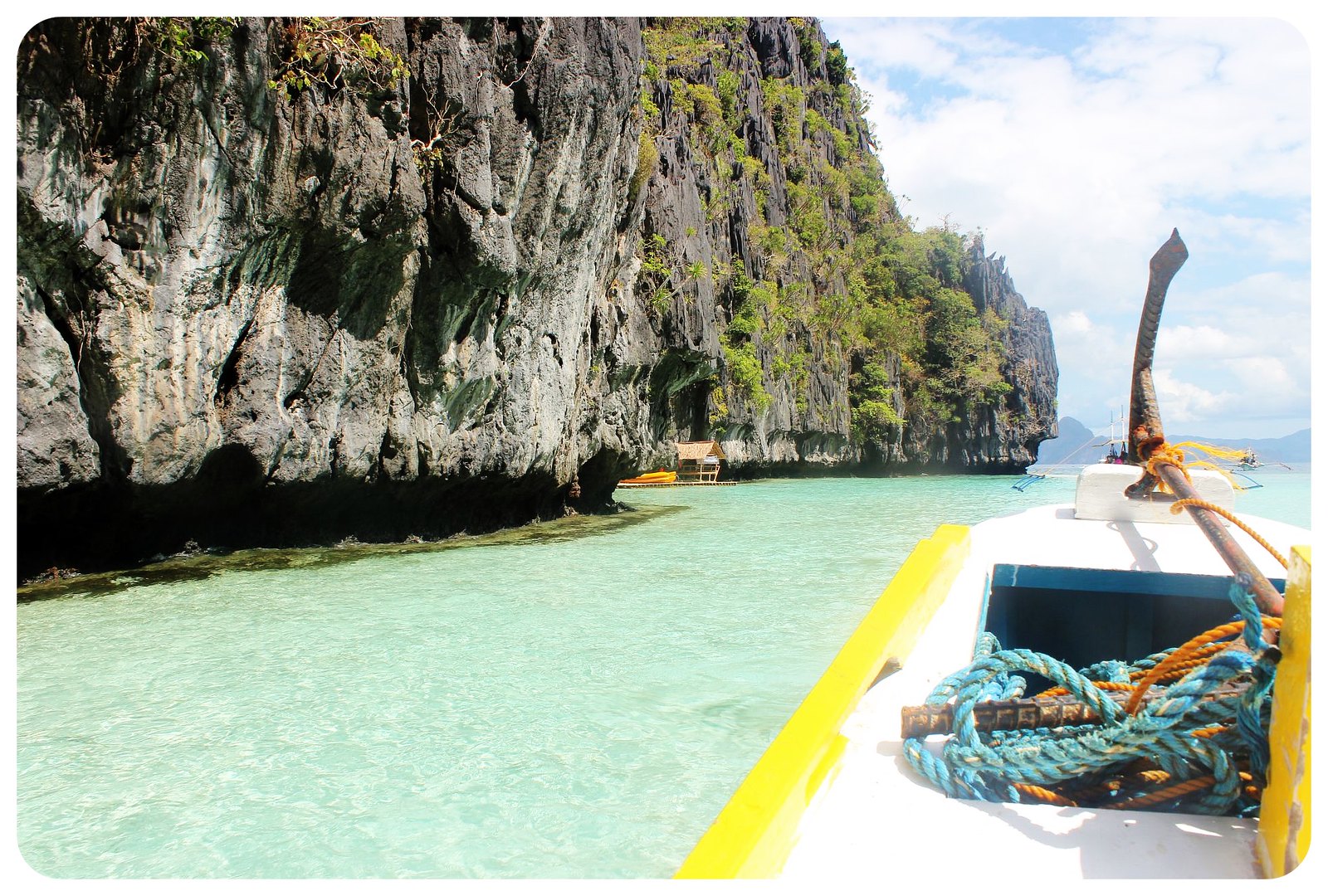 When I researched the various tours to decide which ones to go on, I had found that most people were recommending A and C, so those were the ones I went on (I would have loved to hop on all four tours, but El Nido is not the cheapest place to hang around in, and it’s probably good that there is no ATM in town, forcing you to leave when you run out of money). 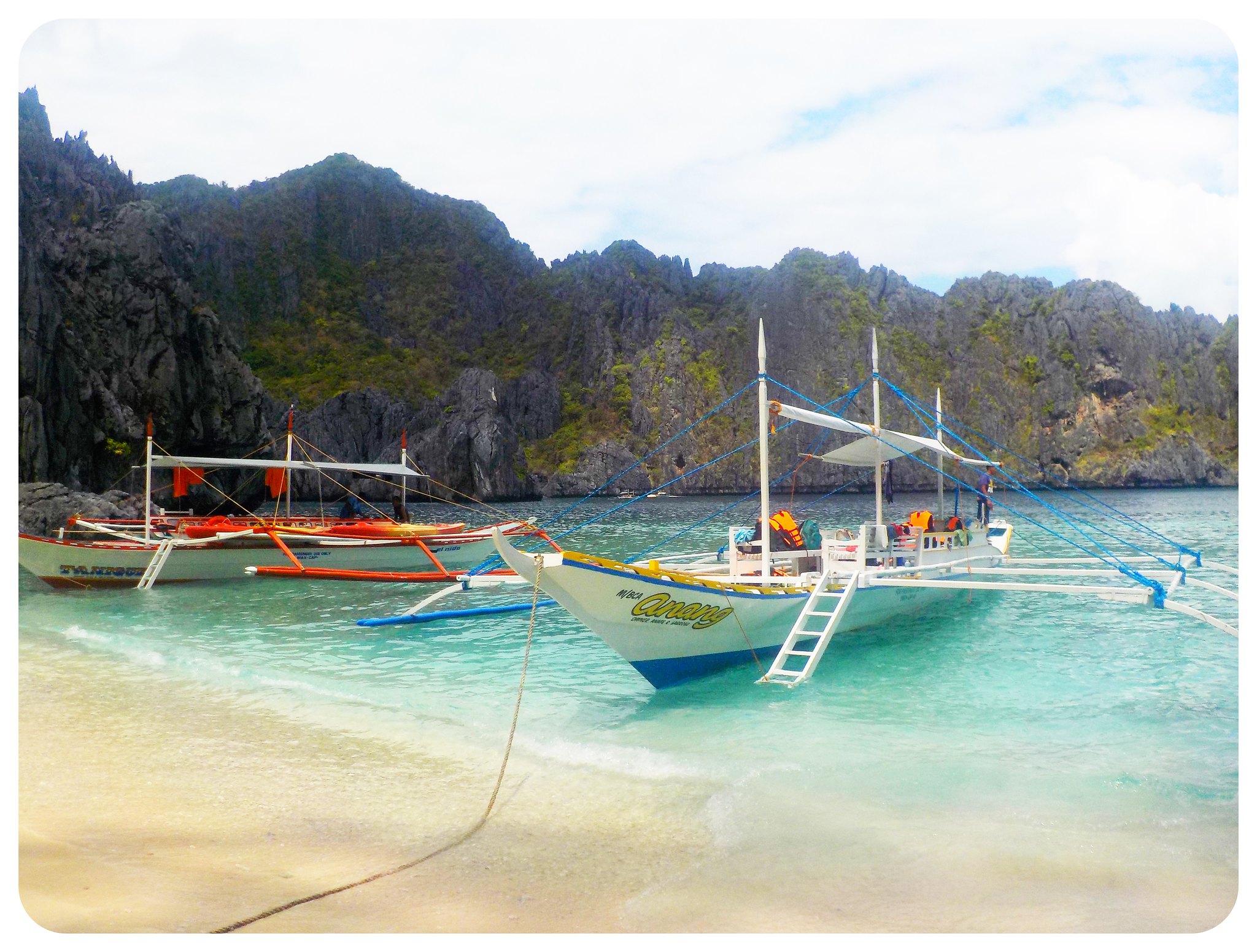 I decided to start with tour A and on a rather cloudy morning I hopped on a little Filipino fishing boat to cruise around the islands. 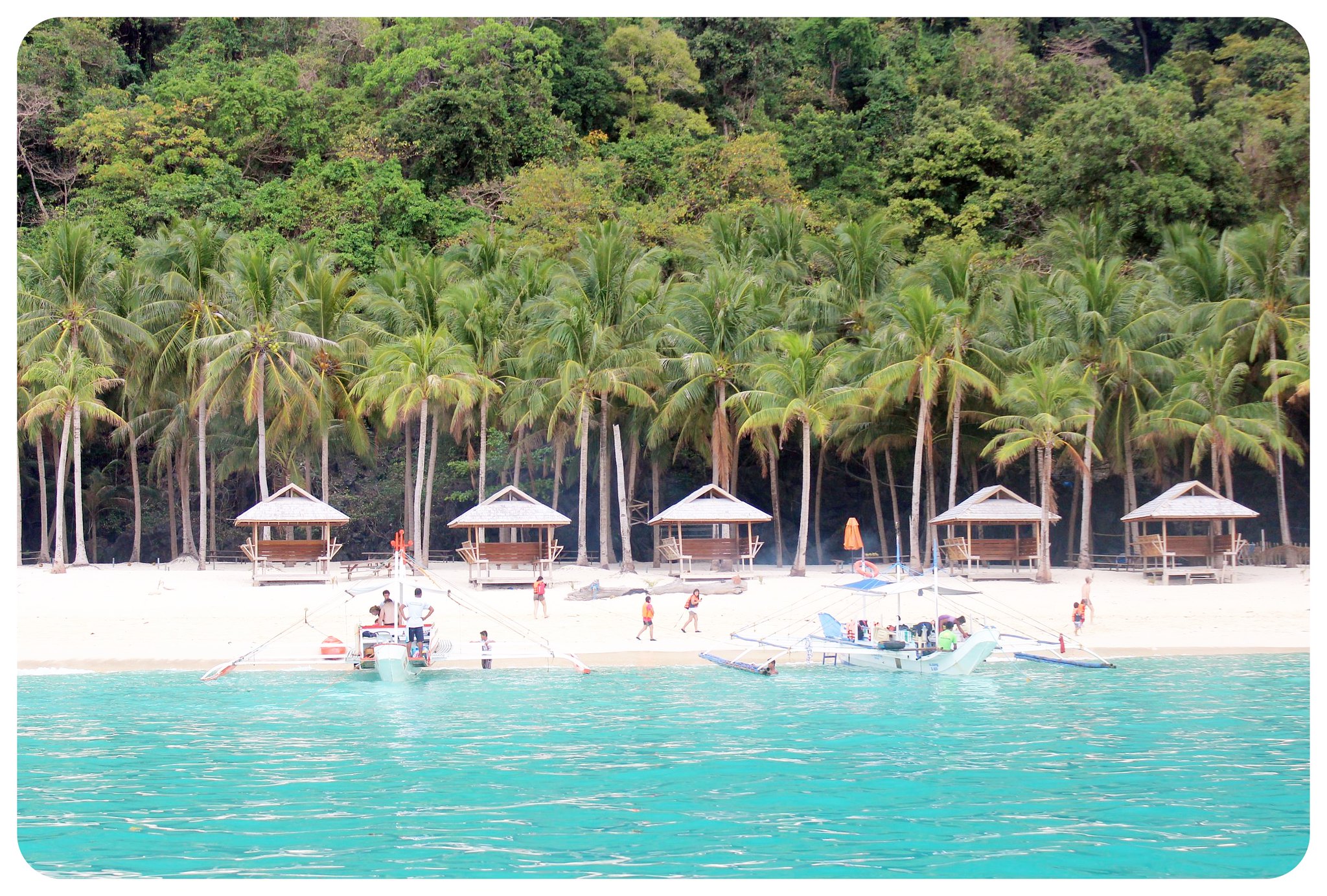 Our first stop was the 7 Commandment beach, a small sandy beach, fringed by palm trees. The snorkeling area was small and I almost didn’t go in the water because it was still overcast and I thought I might even be cold. But I am so glad I eventually did go in! There were already more fish in this little spot than I had seen in all four of my snorkeling stops in Apo Island. It was like a beautiful underwater plant garden, and I would have been satisfied staying here all day, laying out on the gorgeous beach and going for an occasional snorkeling dip, but this was only stop 1 of 5. 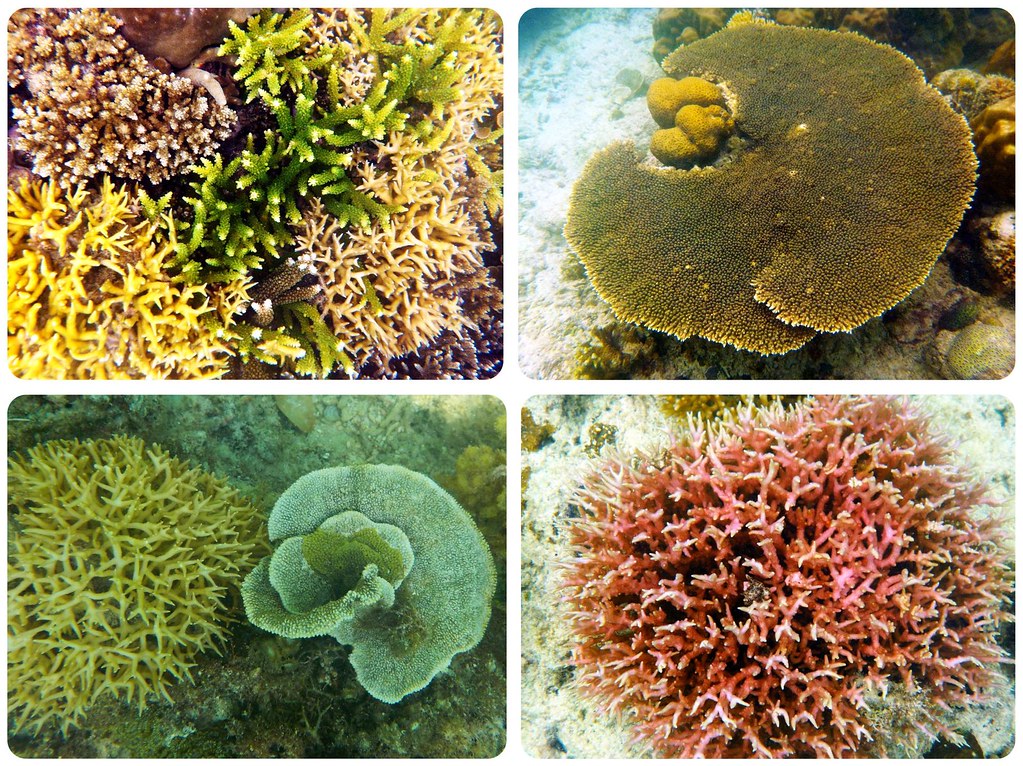 The second stop was already our lunch stop, and we spent well over an hour on a tiny strip of sand beach, and the crew was preparing lunch (lots of fresh fish, rice and fruit) while we were sunbathing and snorkeling. The snorkeling area was much bigger than on the first beach, and I loved the marine life here. You could snorkel all the way out to a massive limestone rock that stuck out of the ocean if you were a good swimmer and see plenty of fish everywhere around you. 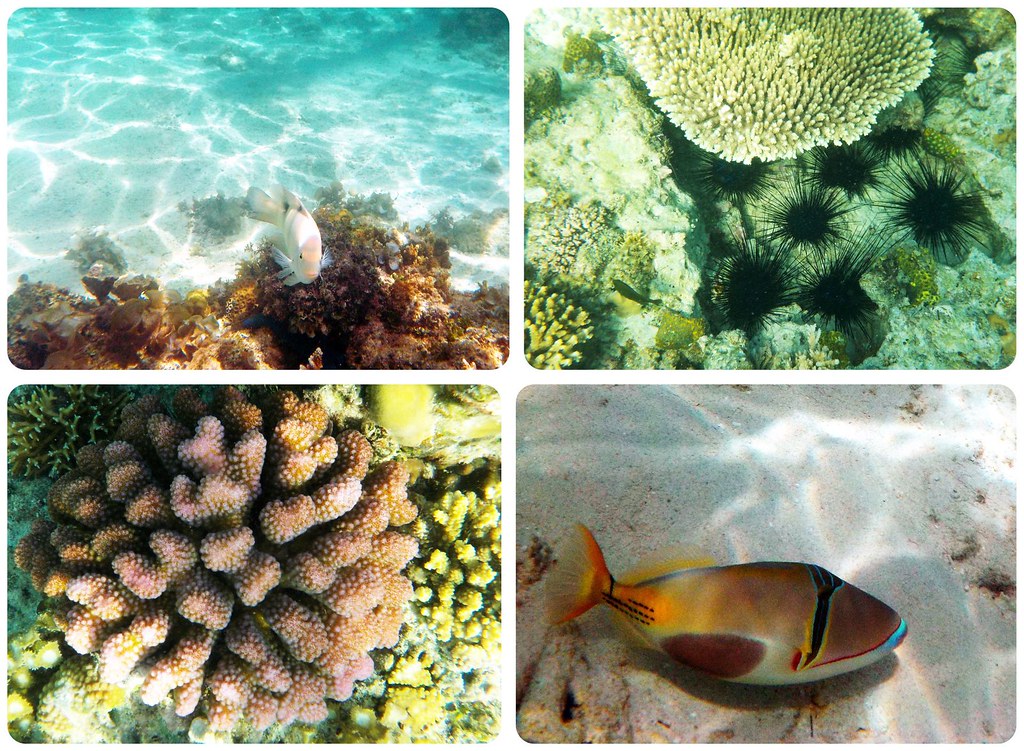 After lunch (very filling if you’re not a vegetarian; leaving you starving if you’re a vegetarian), we moved on to our third stop, a hidden lagoon that we had to swim into, entering via a small hole in the rock. Getting there was a bit difficult because it was extremely rocky – we were all wearing our flip flops or water shoes and were still struggling. Here I could see why Alex Garland’s The Beach was apparently inspired by his time in the Philippines (even though the book is set in Thailand). 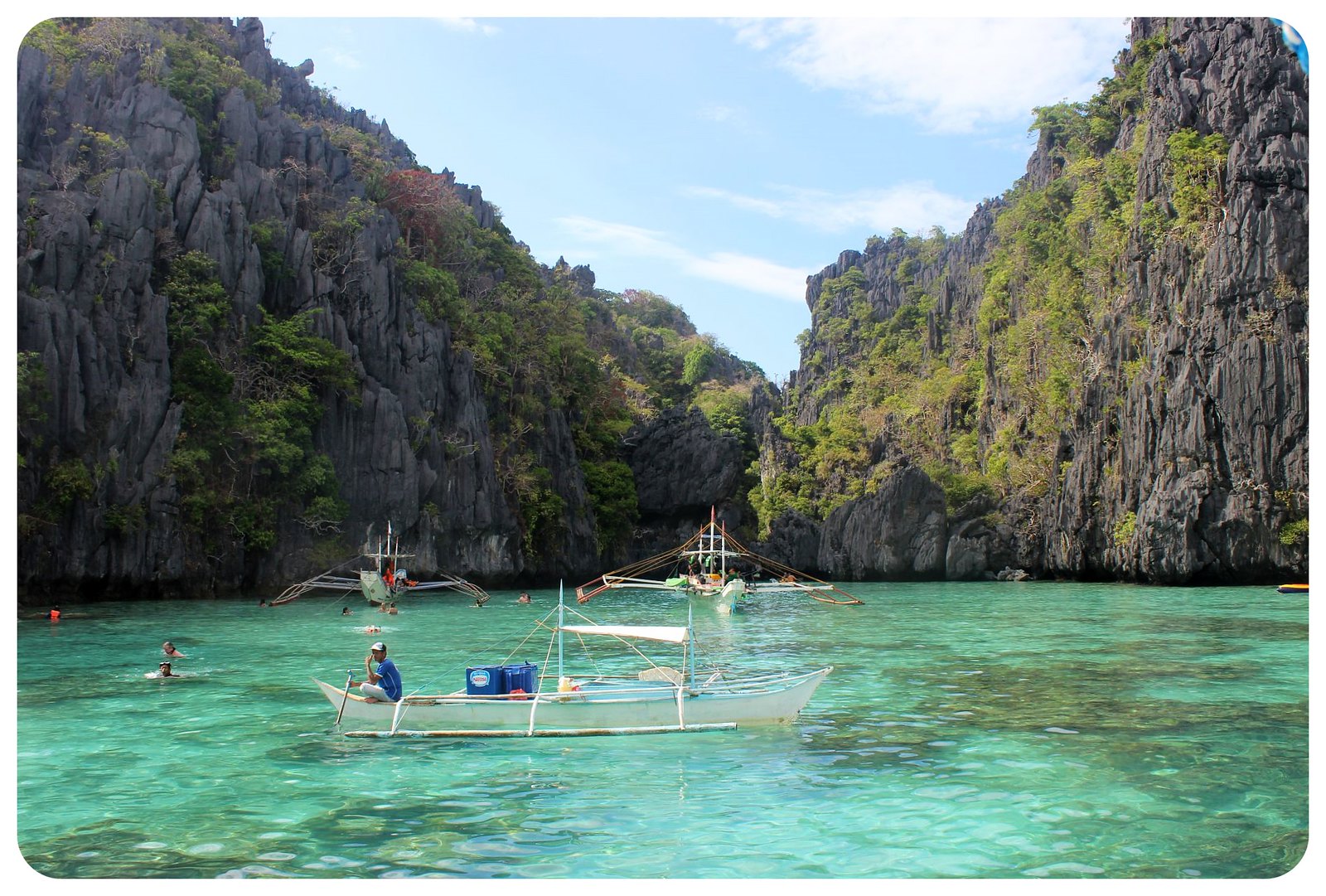 He was probably trying to keep the real beach a secret, but in this case, when five boats get there at the same time and fifty people try to make their way in there at once, it is a bit underwhelming. Only at the end, when everybody else had left and the lagoon was almost empty, I came to appreciate the stunning beauty of it with the towering limestone rocks towering high above me. 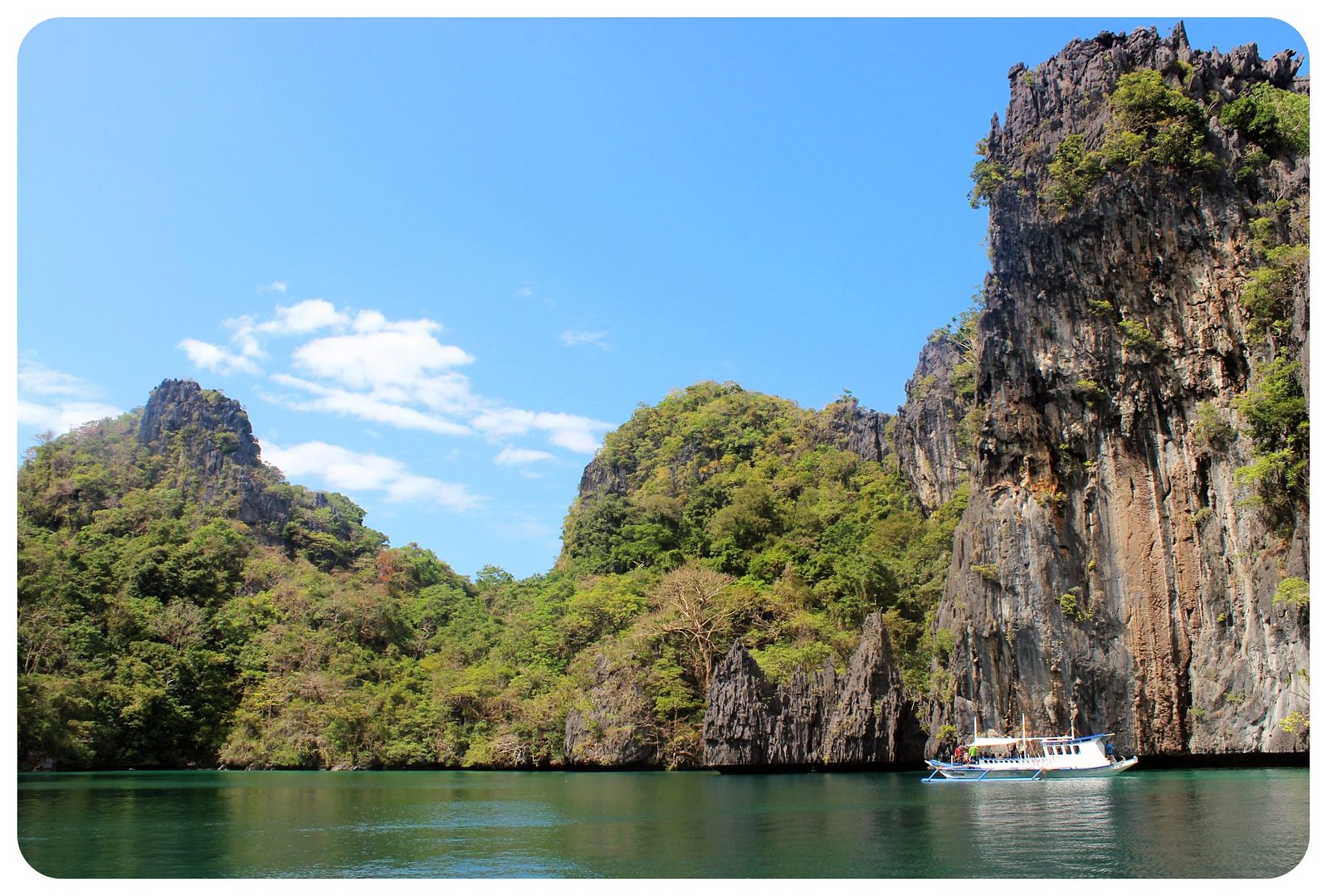 Next was an absolutely stunning stop: First we cruised in a big circle through the Big Lagoon, only open to the ocean on one side, and surrounded by massive limestone rocks on all sides. After that, we stopped outside the lagoon to snorkel in what is best described as a real-life aquarium. The coral, the plants, the fish – so so many fish – it truly felt as if someone had dropped me into an aquarium. I could’ve stayed there forever. 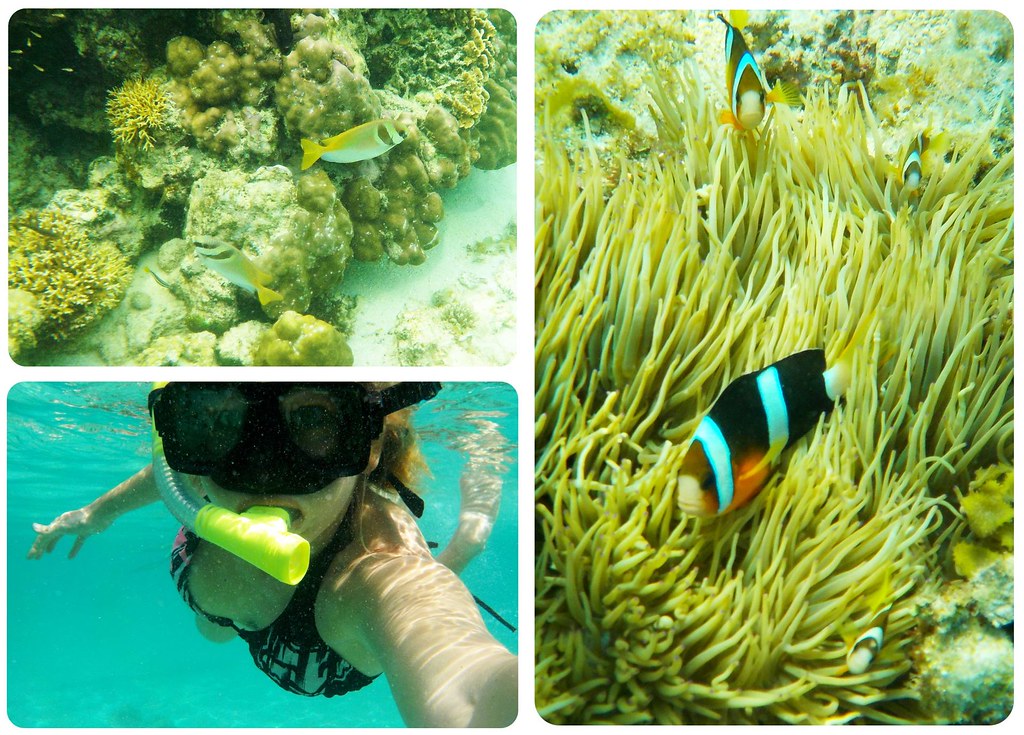 This was only my first island hopping trip in El Nido, and it didn’t disappoint. I was already looking forward to my next one!

For more impressions from Palawan and practical information on how to get to El Nido, where to stay, what to do and other things you should know before you go, check out Part II of this post: The grand finale of my Philippines trip: El Nido (Part II) 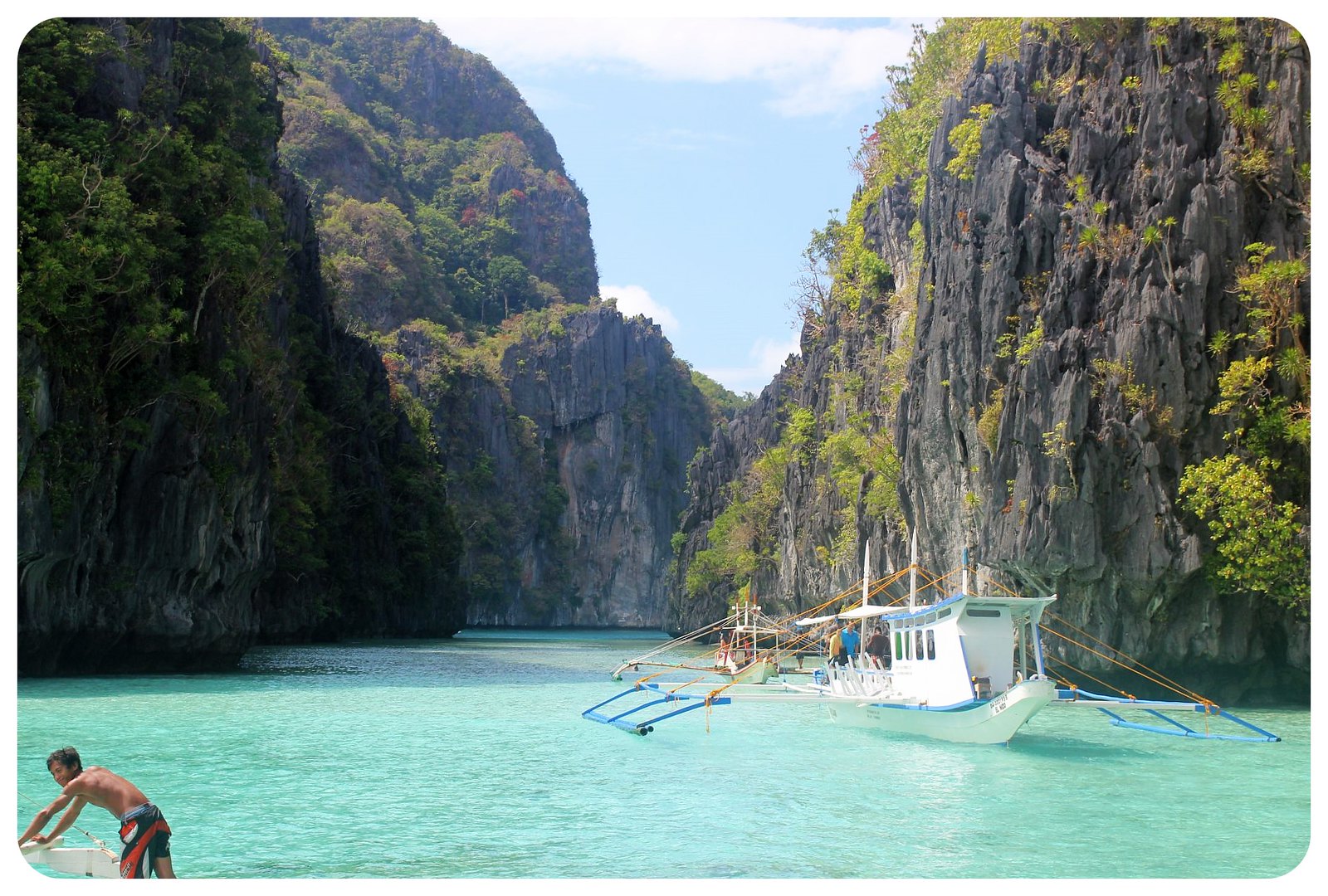 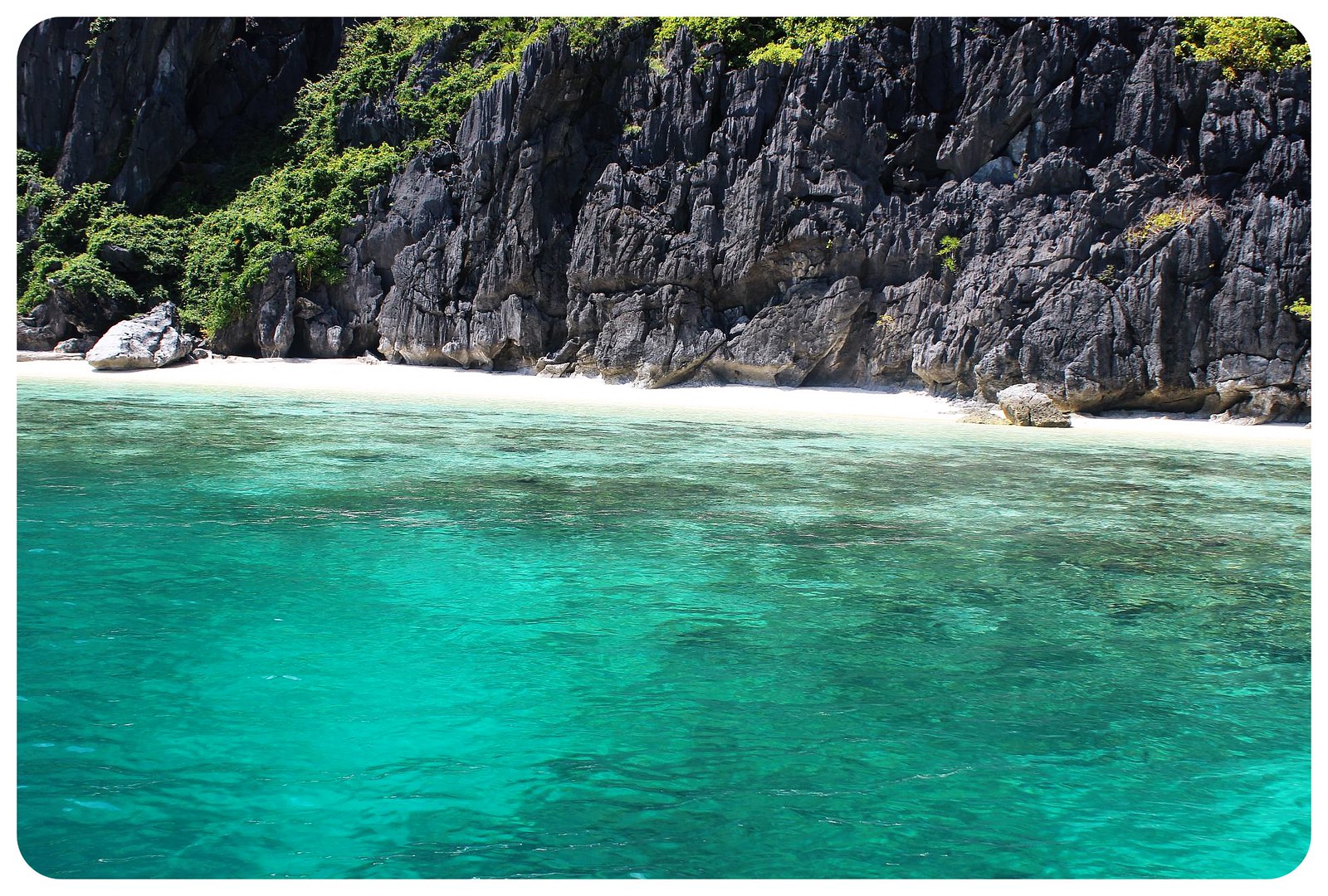 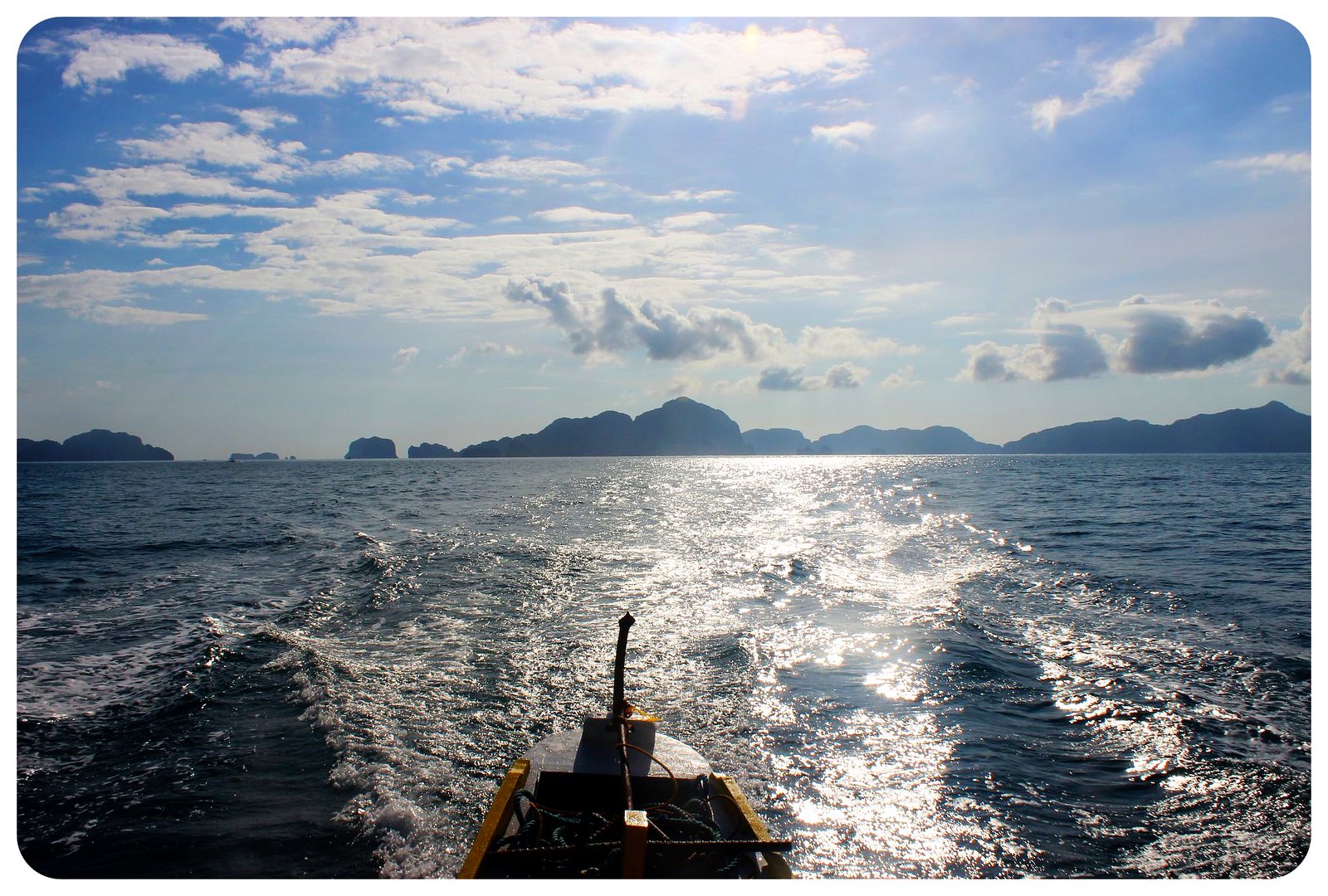 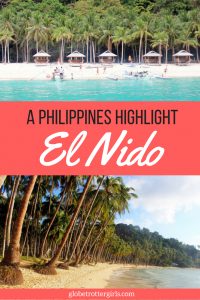 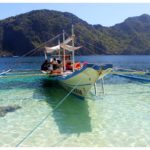 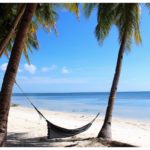 How much does it cost to travel in the Philippines
Click here to cancel reply.

[…] can read more about my time in El Nido in Part I: The grand finale of my Philippines trip: El Nido – this is the continuation of my trip to Palawan, plus my best El Nido travel tips.After a […]

HI. Its been great reading the notes on this part of the world. Thank you ! We are doing the TAO EXPERIENCE. In this case, is it worth a few night in El Nido at the end of the Trip or will it be much the same ? What is the scene in town like... restaurants, bars, bands etc ?? Can you suggest a nice hotel that is well located.

Hi Tracey, yay for the TAO experience! I would spend max 2 nights in El Nido at the end of the trip. Yes, there are a couple of nice bars and restaurants, but especially after the TAO I think you'll find the beach there disappointing. You could take a trip to another, nicer beach the next day (I believe it was called Sunset Beach?) but other than that, don't bother with El Nido. And like I said in my post - I had the hardest time finding a nice place to stay at a reasonable price. I usually check Booking.com and only go for places with a rating higher than 8 and good reviews. Please feel free to tell me all about your TAO and make me jealous ;-)

Yup, the Puerto Princesa-El Nido ride is sure to keep you awake:) BTW, Island Transvoyager has been reborn as AirSWIFT with an online booking engine.

what camera did you use? you got great pictures underwater

Thanks, Jeff! I used the Nikon CoolPix. I have a full list of my camera gear here - as for the CoolPix, I believe there's a newer model out now. Time for an upgrade ;-)