Exactly six months ago I wrote about living in New York City during COVID-19, and I thought it would be a good time to write an update on how things have changed since then, and to answer the question I’m getting asked a lot: What is it like to visit New York City during COVID-19? If you’re planning a trip to NYC anytime soon, this will give you an idea of what life is like, which cultural institutions are still closed and what is open.

Contrary to what many people (who are NOT in New York) are thinking, New York City is still very much in the middle of the pandemic and still has a long way to go until it is fully recovered from the severe impact COVID-19 has had on the city. 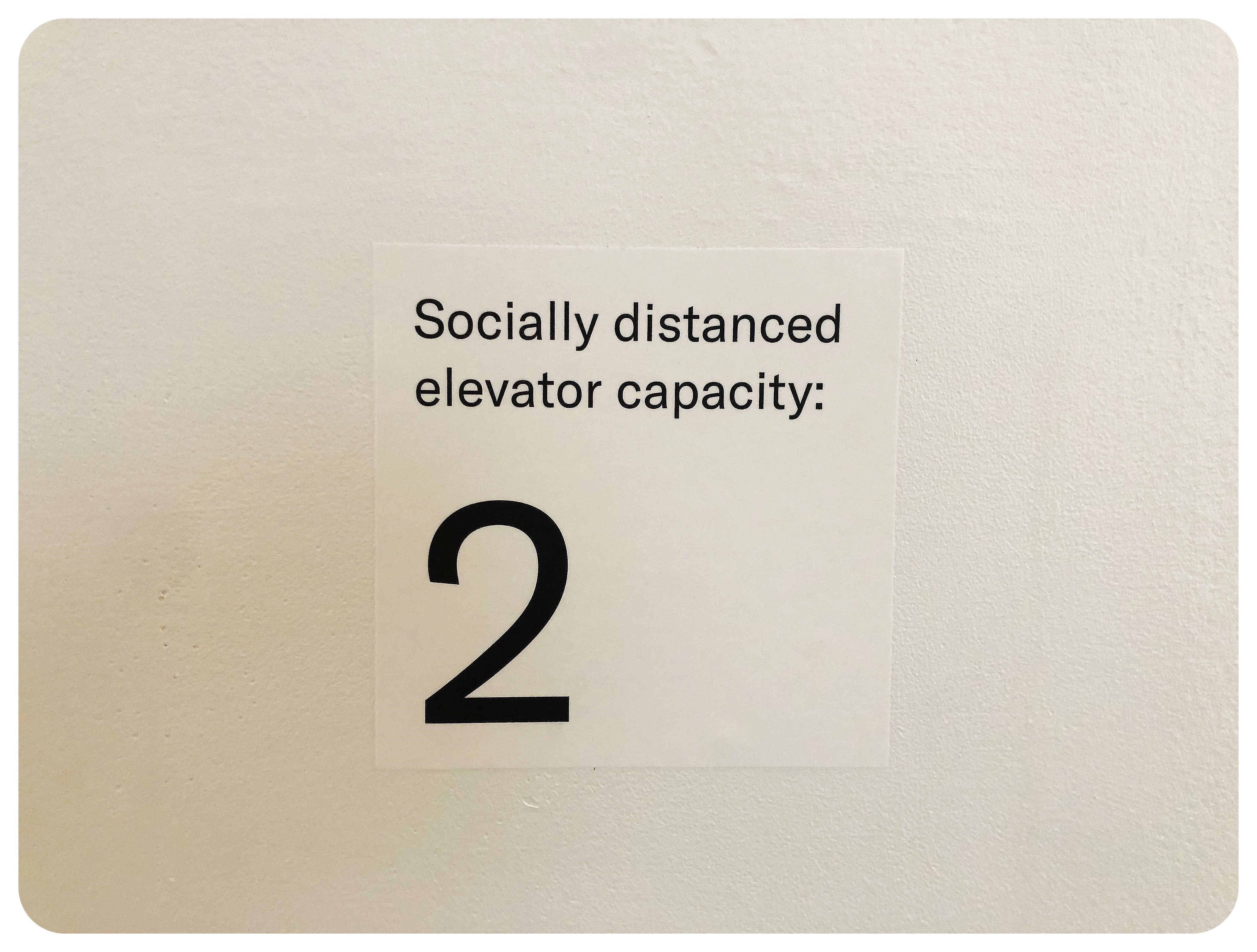 I’d like to start by saying that New York City is definitely not dead. This article on New York City being dead got a lot of attention when it was published in August, but luckily it also got some backlash, most famously from Jerry Seinfeld.

I don’t want to sugarcoat anything: COVID-19 has ravaged New York City’s economy, and my heart is breaking every day for everyone affected by the pandemic, for everyone who had to close their restaurant, shop, café, bar, or small business. At the time of writing, over 2,800 small businesses in New York have closed permanently because of the pandemic. And it’s not just small businesses that are affected by the lack of regular city life: even big hotel chains closed some of their New York City hotels permanently. 146 of New York City’s 705 hotels have closed – that’s 20% of all hotels. Big retailers like Victoria’s Secret and Olive Garden and McDonald’s are struggling to pay rent for their pricey Midtown locations that don’t see the usual foot traffic of Midtown workers and tourists. You can read more about it in this New York Times article: Retail Chains Abandon Manhattan: ‘It’s Unsustainable’ 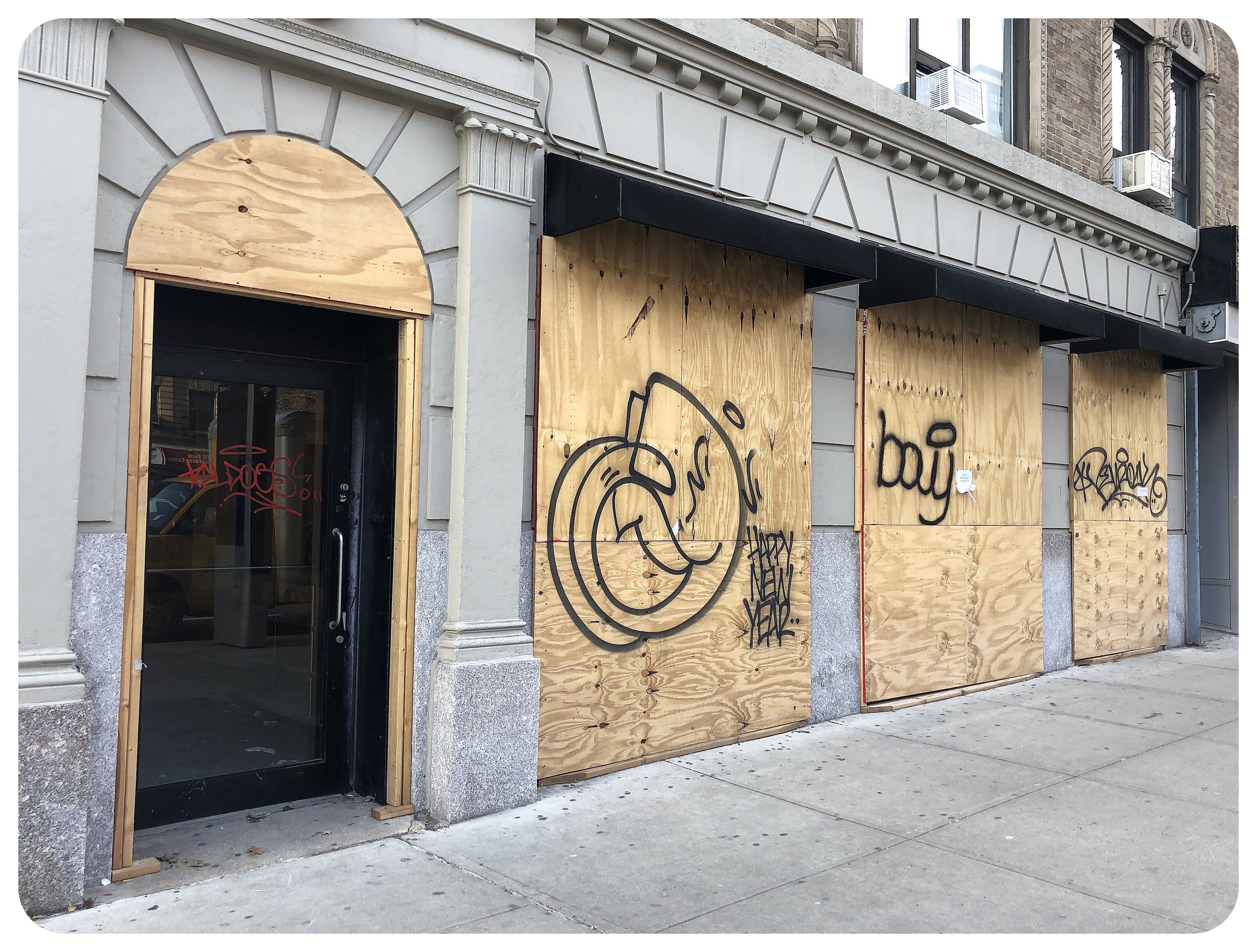 But quite a few things have changed already since James Altucher wrote his essay in the summer. Midtown Manhattan for example is not that empty anymore. Sure, it is far from as busy as it used to be in pre-COVID times, but considering how many office workers are still working from home and that there are virtually no tourists in New York right now, it is promising to see large numbers of people in the streets again. The majority of shops has reopened, and even the street vendors are back, offering counterfeit Louis Vuitton bags and Chanel sunglasses. A new addition to their repertoire are the Prada and Chanel face masks.

Since the reopening of the city slowly began in June, gradually easing restrictions and restarting the economy after more than 100 days of lockdown, New Yorkers have started to adjust to life with COVID-19. On June 8th, Phase 1 of the reopening saw manufacturing, construction and wholesale being resumed, and non-essential retail stores were allowed to open for curbside pickup. This wasn’t a big change from “life in lockdown”, since anyone who wasn’t working in those industries was still working from home. Restaurants, bars, attractions and cultural institutions were still closed, beaches and public pools were closed, and frankly, there just wasn’t much to do in NYC. 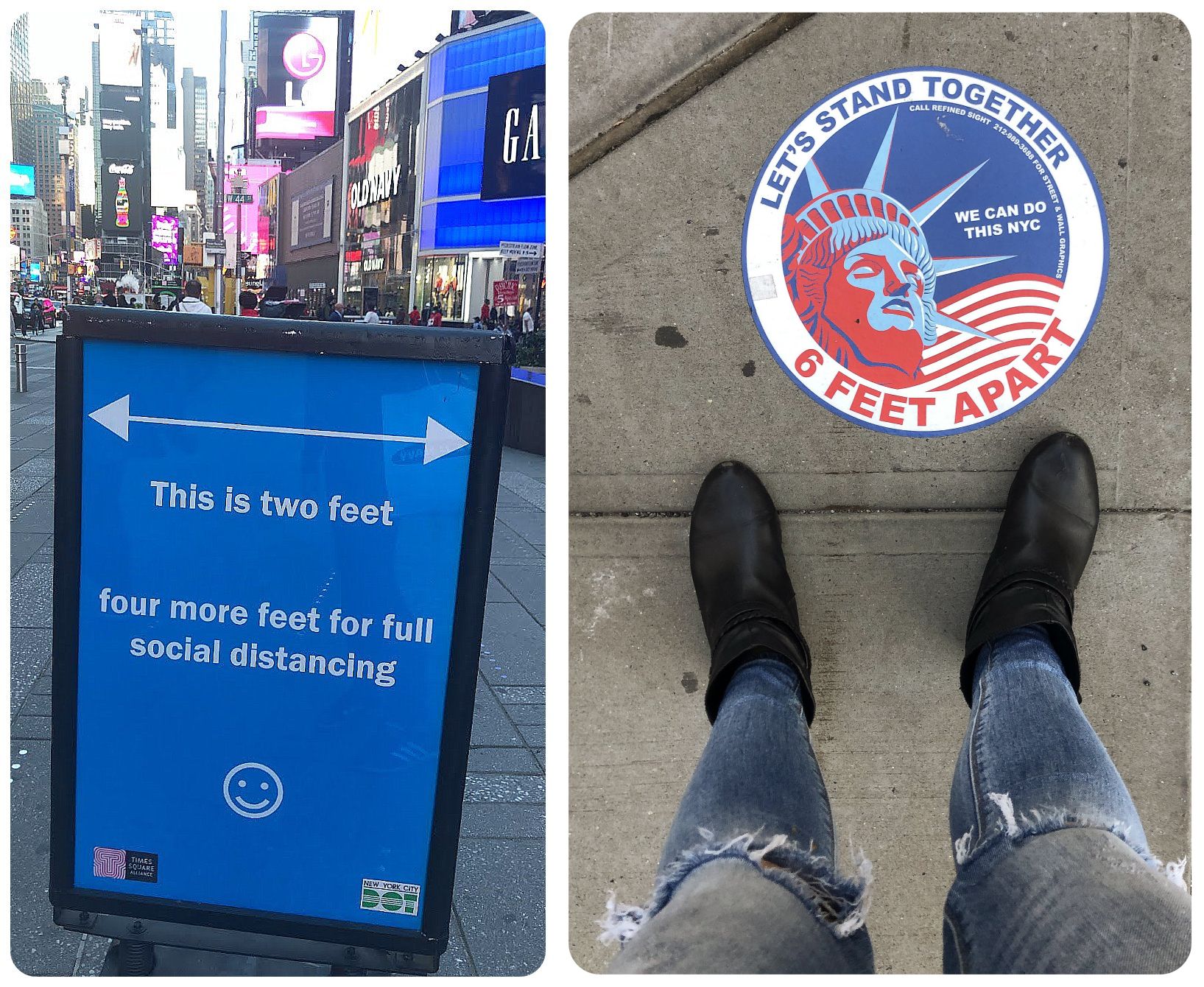 Phase 2 of the reopening, which started on 22nd June, had a bigger impact on daily life, because restaurants were allowed to open for outdoor dining (no indoor dining) and retailers were allowed to re-open their stores, although with a limited number of customers allowed inside. Office workers were allowed to return to their offices for the first time in three months, but most companies allowed their employees to continue to work from home – until the end of the year, and possibly longer. As of last month, only 10% of office workers had returned to their desks, causing the New York Times to investigate: Manhattan’s Office Buildings Are Empty. But for How Long?

On July 6th, New York City entered Phase 3 of the reopening, which meant gatherings of up to 25 people were allowed – a big change from the previously allowed 10 people. Bars were allowed to open if they had an outdoor space and were able to serve some sort of food with the drinks – indoor drinking and night clubs remained closed, however. 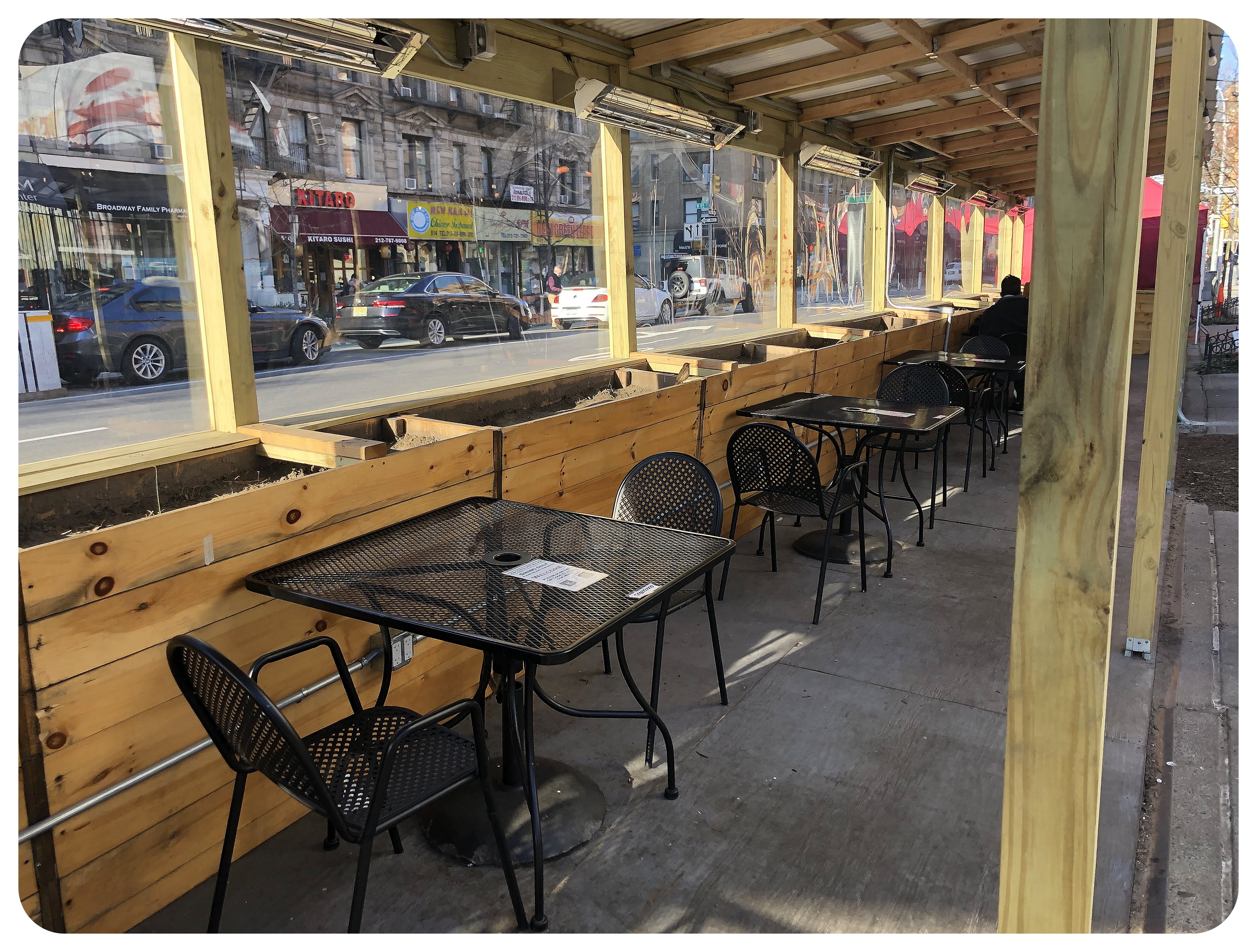 Later that month, NYC entered Phase 4, which allowed zoos, botanical gardens and some cultural institutions to open. The Statue Of Liberty for example reopened, as did the Empire State Building. Museums weren’t allowed to open until the end of August, and at a capped number of visitors. Movie theaters, gyms, concert venues and clubs were still not allowed to reopen. Broadway remains dark – at least until May 2021, but probably longer.

And even though tourists are arriving in much smaller numbers right now, those who are able to travel to the Big Apple now are eager to visit to New York City, knowing that there wouldn’t be the usual long lines for attractions and popular eateries. Unfortunately, New York has put 38 U.S. states on a quarantine mandate, meaning that travelers arriving from any of the states on that list are required to quarantine for 14 days. The quarantine mandate is also imposed on travelers from over 160 countries. That means it is pretty much impossible for anyone from these states and countries to visit New York City for a vacation at the moment. But people still want to visit NYC, and they’ll always want to visit NYC. I am optimistic that tourists will return to New York City as soon as the world recovers from the pandemic – whenever that will be.

Face masks are still mandatory outdoors, on public transportation and inside shops and restaurants, and people have been following the rules much more than in other parts of the country, which I think is due to the large number of COVID cases and deaths the city saw in the spring – nobody wants to experience that again.

So while New York City is definitely not dead, we are still in the middle of a global pandemic and life is far from “normal”, whatever “normal” means right now. Museums are limited to 25% of their usual capacity, anyone who can work from home is still working from home, many cafes still don’t allow people sitting inside and offer take-away only. Grocery stores and retail shops still operate with a “max number of people” limit, meaning that sometimes you find yourself in a long line just to grab some food. And let’s not even talk about nightlife – who knows when we can a night out again, or go to a concert. I also miss going to the movies and would love to see a Broadway show – but that won’t happen until next summer at the earliest. 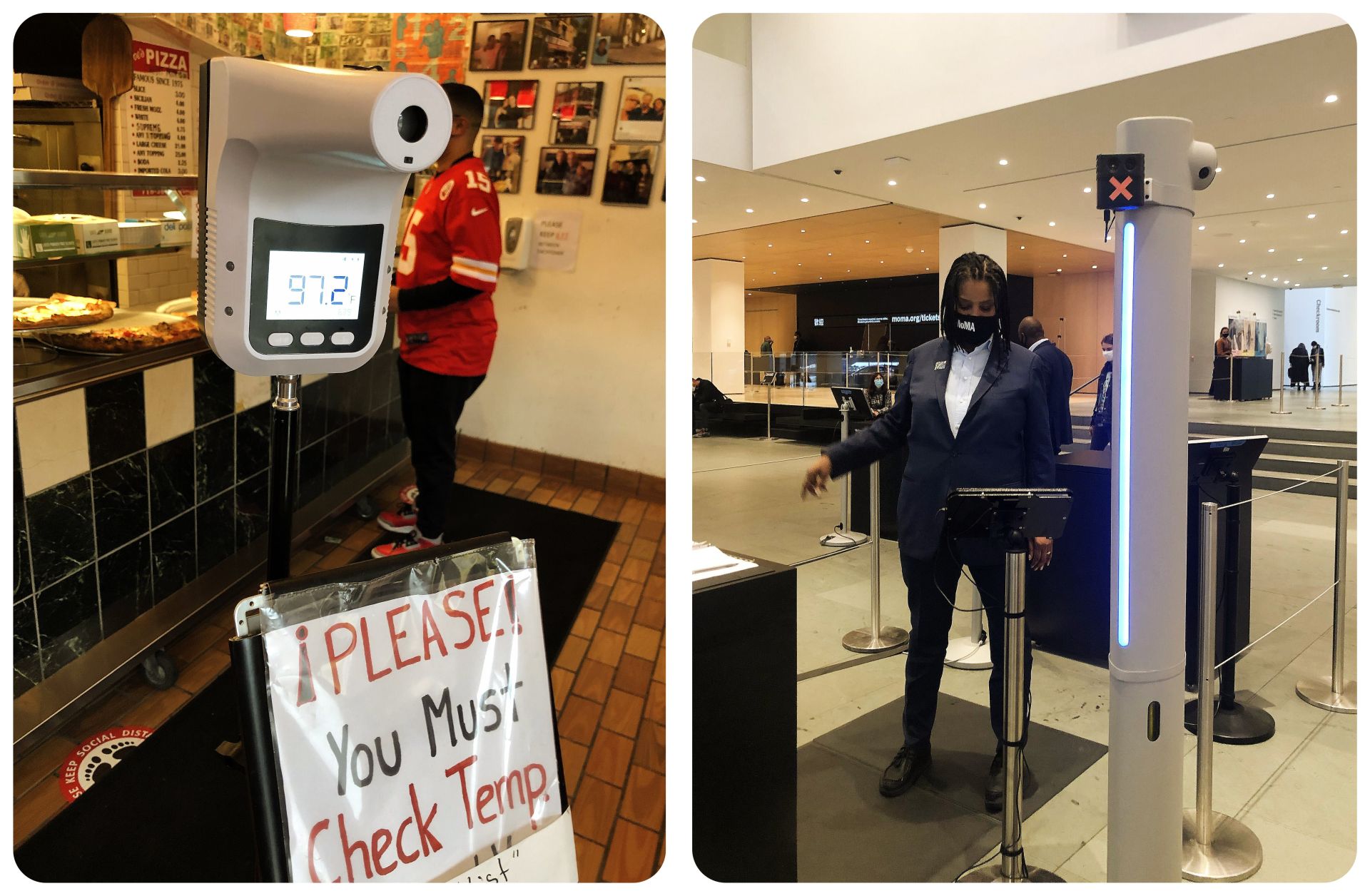 Temperature checks are obligatory in some restaurants and museums

At the time of writing this, COVID-19 has ruled our lives for 218 days. Mid-March was when everything started shutting down, and here we are, six months later, with no “end date” for our current pandemic life in sight.

I have thought about leaving New York several times over the past few months. Most of the things that make living in New York worth it – make putting up with exorbitant living costs and living in tiny apartments worth it – are simply not possible right now. And so most people are still suck in tiny apartments or rooms, not able to enjoy all the things that the city usually has to offer. In a Podcast I listen to, Heavyweight, during a “COVID-19 Check-In” episode at the beginning of the lockdown, one of the hosts expressed it perfectly: “Everything that brought people to New York is on hold or gone, and we are left with the worst part of living in New York, which is paying a lot to be in a very small room”. I am beyond grateful that I was able to quarantine by myself and didn’t have to deal with room mates, and that I love my apartment. I made it as cozy as possible, lit candles, added some fairy lights, cooked a lot, tried new recipes, tried to get outside for some exercise every day, and made sure I always had a social gathering in my calendar – virtually, of course. 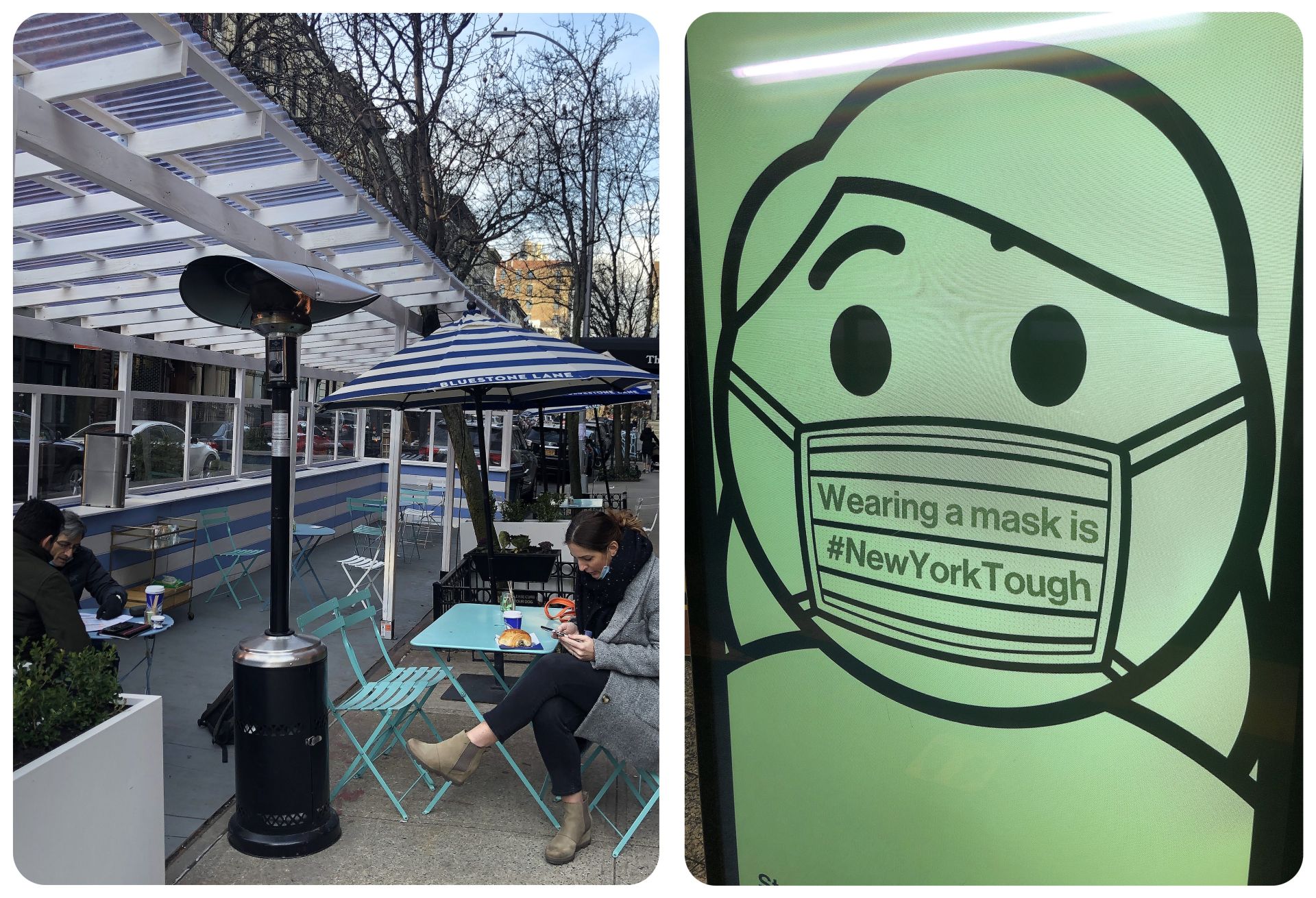 And while the thought of reducing my spending by cutting out rent was tempting, I couldn’t see myself leaving New York City. New Yorkers are resilient. “New York tough” is more than just a slogan. It is no secret that New York City is not an easy place to live in, and you have to have a particularly thick skin if you want to survive (and thrive!) in this massive, densely-populated urban sprawl. I’ve been hustling hard to live in New York, and I know it’d be easier to live in most other places, and yet, there’s no place I’d rather be. I’ll patiently wait until New York bounces back – because I have no doubt that it will – and until then, I am taking advantage of having the city to myself – without the usual tourist crowds. I can enjoy the MoMA without waiting in line and without many people in the galleries. I can take in the magnificence of Times Square, because I’m not being bumped into constantly. I can walk across the Brooklyn Bridge and have it completely to myself. I can roam around flea markets without feeling claustrophobic. I can get on the Staten Island ferry and enjoy the views without fighting anyone for the best seat. I can get a slice of Prince Street Pizza without a having to wait in line. I can even get a cronut! 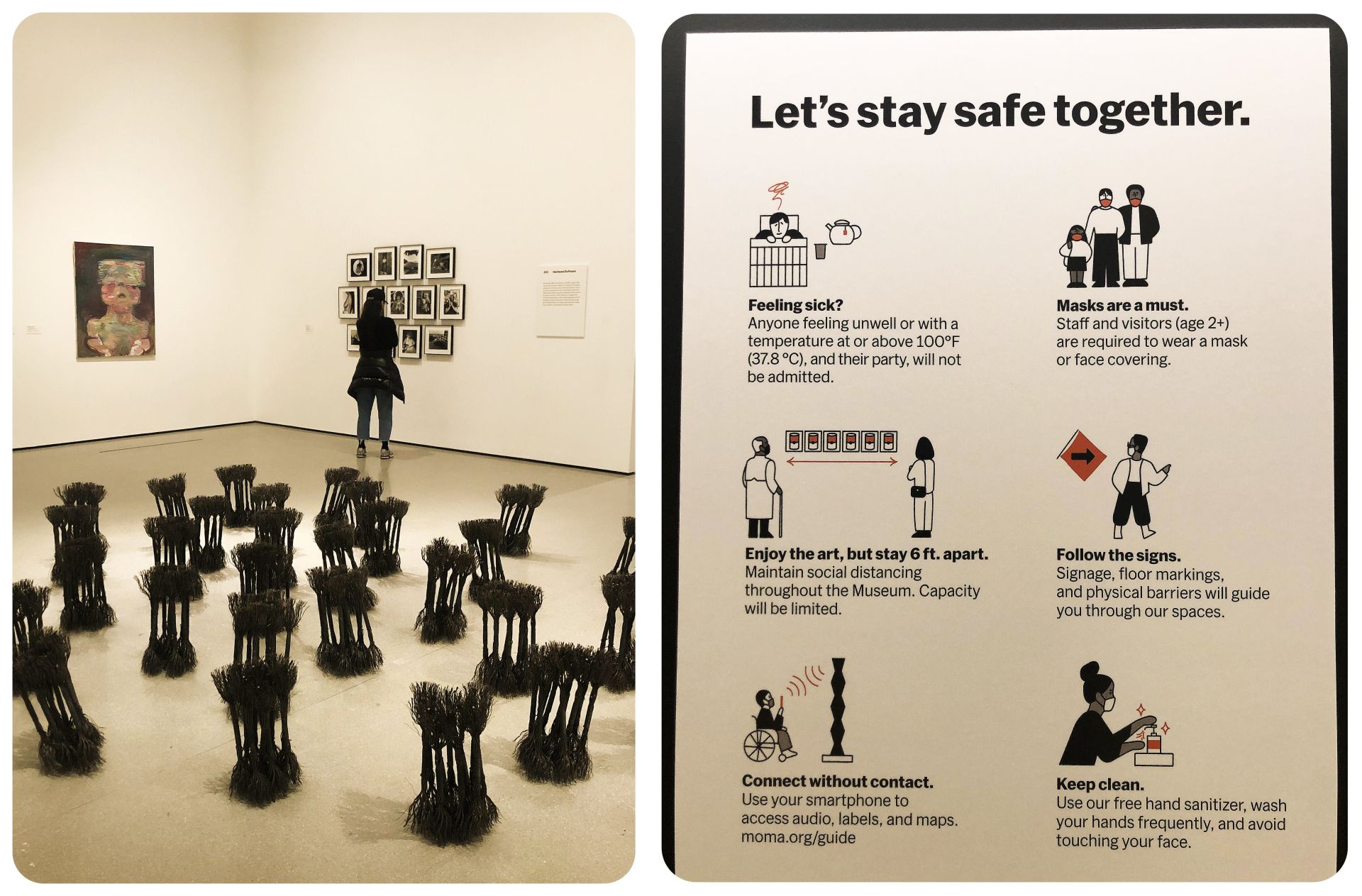 The MoMA during COVID-19

If you visit New York City during COVID-19, you will have the city almost to yourself, which is something that will probably never happen again, and quite a few local travelers from adjacent states and nearby cities have been taking advantage of that. The lack of international tourists paired with bargain hotel rates sure has a big appeal. While there are some advantages of the city still being empty, the one thing that makes New York so distinctively New York, is still missing: the energy. Jerry Seinfeld wrote in his NYT Op-Ed in response to James Altucher’s “New York is dead” piece:

Energy, attitude and personality cannot be “remoted” through even the best fiber optic lines. That’s the whole reason many of us moved to New York in the first place.

Real, live, inspiring human energy exists when we coagulate together in crazy places like New York City. Feeling sorry for yourself because you can’t go to the theater for a while is not the essential element of character that made New York the brilliant diamond of activity it will one day be again.” 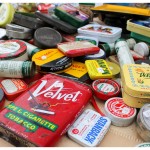