Before we had even eaten the free cookie and coffee, the captain had already turned on the fasten seat belt signs and just 50 minutes after the flight took off from Managua International Airport, we were landing on an air strip set in green fields dotted with tin houses, palm trees and Caribbean English speakers. We had arrived on Big Corn Island, one of two Caribbean islands of Nicaragua (the other, smaller island is very appropriately named Little Corn Island). We had decided to visit the Corn Islands on a whim – we were in Leon, in mainland Nicaragua, where we were sweating so profusely in the unbearable heat that we ended up walking into the next best travel agency we could find and asked them to book us on the next flight to the Corn Islands.

There is no feeling like stepping out into the Caribbean. No matter where you are – The Dominican Republic, Barbados, Belize, or here on the Corn Islands, the air, the white sand and that easygoing feeling hit immediately and from the time your feet are on solid Caribbean ground, your hand feels empty whenever not clutching an alcoholic beverage.  However, if you are looking for an all-inclusive beach getaway involving hours on a sprawling white sand beach, swim-up bars and all night dancing, the Corn Islands are not for you. 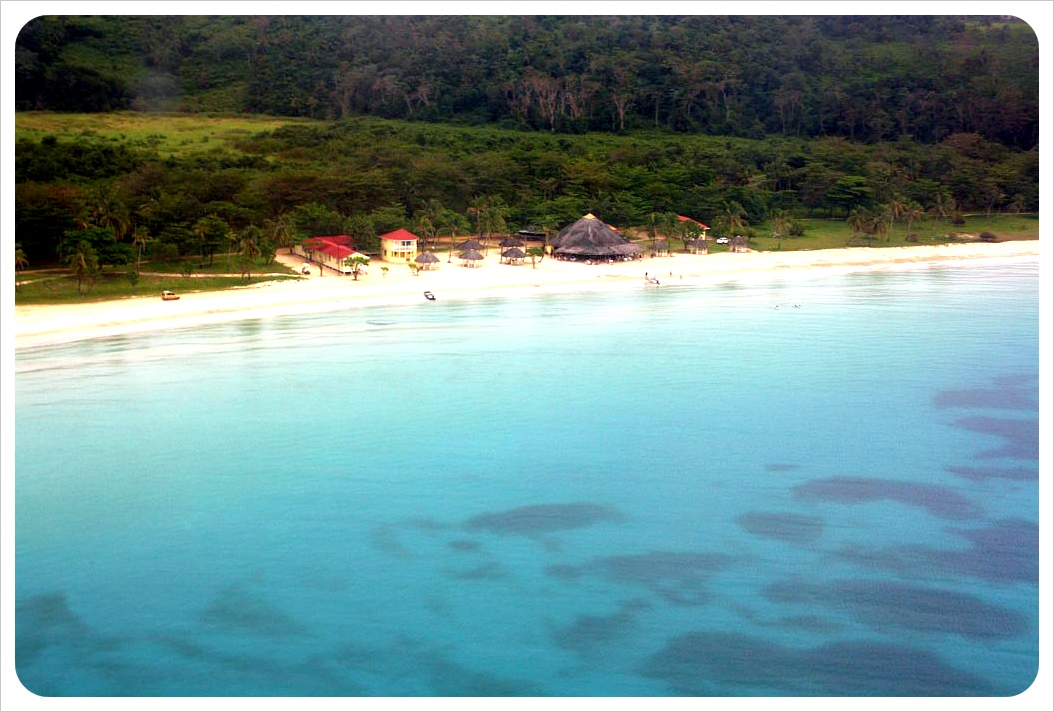 The Corn Islands are two dots in the ocean 70 kilometers (50 miles) east of Nicaragua’s (in)famous Moskito coast. Their population, combined, is just under 8000 people, with Big Corn being home to over 3/4 of the total. Although tourism plays a major economic role on both Corn Islands, both Big Corn and Little Corn maintain a well-kept-secret feeling. Hotels don’t line the shores but rather dot them, and while there are four-star hotels, none are over-sized or even large and there is plenty of budget accommodation on the Corn Islands as well. 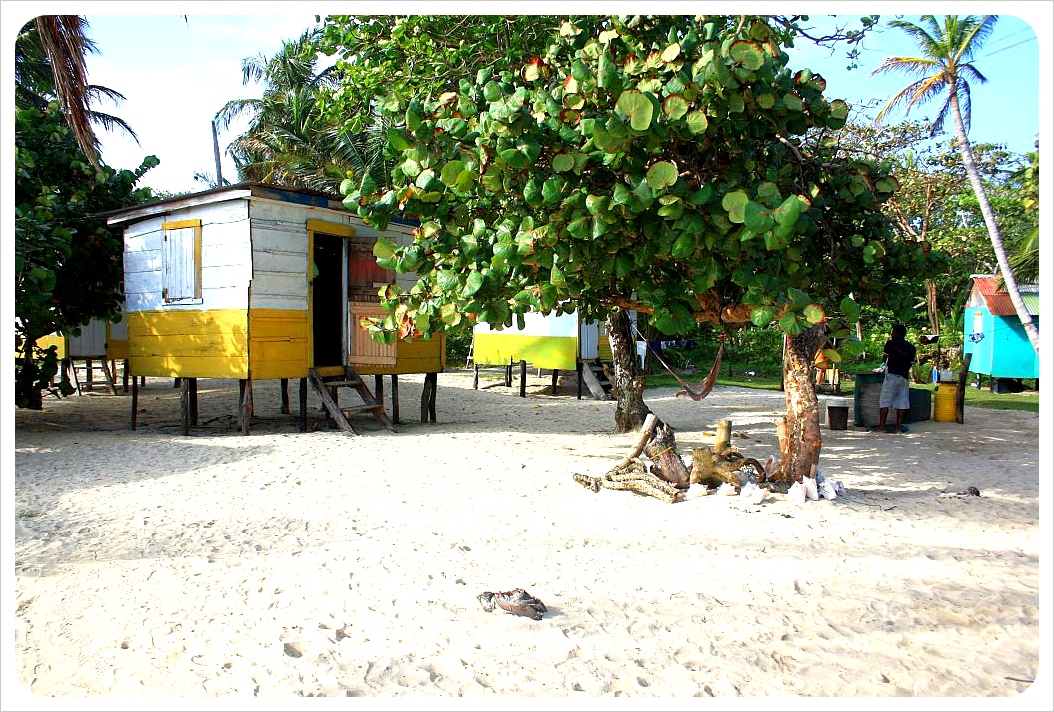 Drinkers can stay out late on either island, but are stuck with tiny tiki bars or hotel rooms, as there are no nightclubs on either island. Upon landing on Big Corn we couldn’t help but giggle at the arrogance of this place calling itself ‘big’. Upon returning from the 45 minute boat ride back from Little Corn a week later, however, Big Corn’s paved streets, horn-honking taxis and larger hotels felt like the big city next to Little Corn Island, where there are only paths, no paved roads at all, no cars, no golf carts, not even many bicycles. The island is so small and relaxed, the only gear you need to get around are your two feet and fins and a mask should you decide to dive or snorkel while on the island. Little Corn just got electricity a few years back, and still only comes on for half the day.

Sure, Big Corn has 24 hour electricity, but this doesn’t make it the luxurious island destination you might imagine before booking tickets. Life on both islands is quiet, people don’t have much and no one really seems to care. The remote location means that many times things don’t work, or they run out. This makes the holiday to the Corn Islands more venturesome, but in the end, especially on Little Corn Island, there is nothing more to do than read a book, snorkel or dive, and relax in the 30 C / 85 F year-round temperature.

Are the Corn Islands worth a visit? 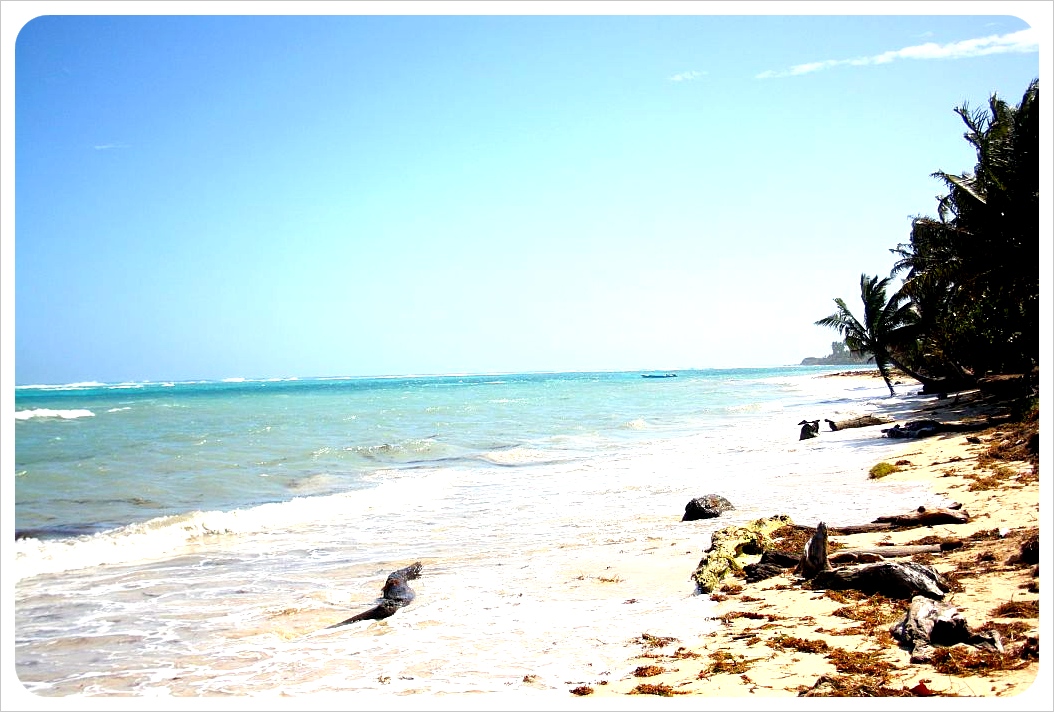 Who would want to visit the Corn Islands?

The Corn Islands really are the perfect get-away for stressed-out city folk, but only for those looking for an exotic, off-the-beaten path location reachable only by a flight to Managua, short flight over to Big Corn, and then a 40 minute boat-ride to Little Corn and back again. For families with kids in particular, Little Corn island seems a great option, as the hotels on the far side of the island are remote, have plenty of space, and the kids can play all day. At the Little Corn Beach and Bungalow, we watched two families with a combined total of seven kids tie coconuts to ropes and make up games which required dragging them around a makeshift racecourse for at least five hours. Bet they were in bed early that night! For all-inclusive types, the Corn Islands are a no go, you might rather look into Barbados holidays where you can find plenty of inexpensive vacation resorts.

For those who visit Nicaragua’s well-worn tourist sites, we would definitely recommend adding the Corn Islands to your itinerary. Sure you might get enough beach in San Juan del Sur and island like on Ometepe Island, but the Corn Islands are a bumpy five to eight hours boat ride off the coast, and offer a Caribbean side of Nicaragua that can only be felt here. If you are a fan of Nicaragua, then the islanders living out in the middle of the wide ocean are an integral and irreplaceable piece of the Nicaraguan cultural identity puzzle. We met a great Alaskan couple who chose Nicaragua as their honeymoon destination, and they chose the Corn Islands as the beach getaway portion and spent the rest of the time exploring Granada, Leon and a couple of country/lakeside locations. In their case, the Corn Islands were the perfect relaxation part of an exciting three week getaway.

For city breakers and culture vultures, the Corn Islands are not recommended. 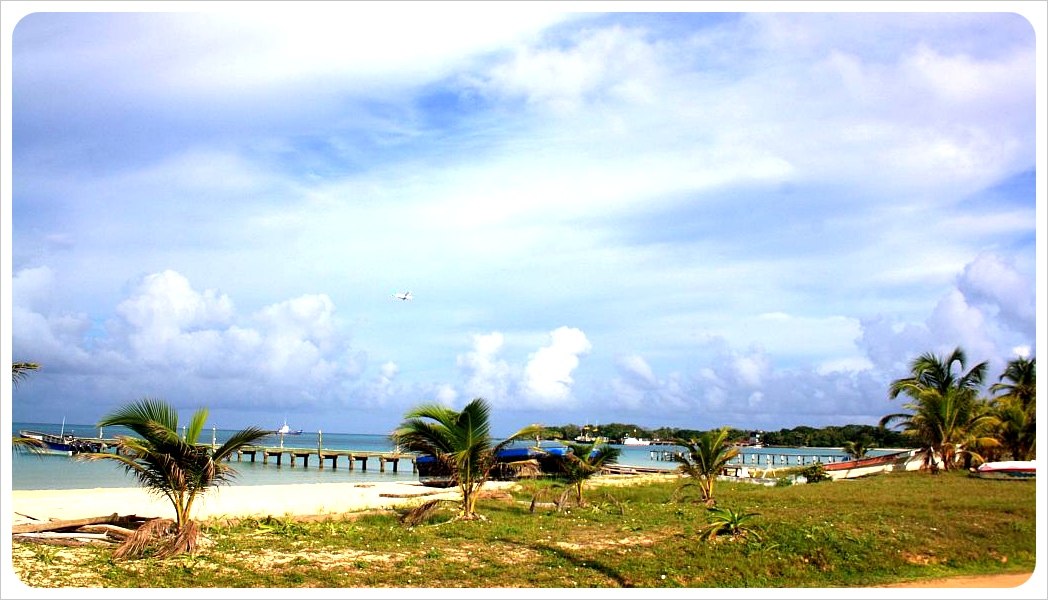 Despite the silver-haired tourists that flood the mainland town of Granada, Nicaragua most tourists in Nicaragua appear to still be young backpackers or budget travelers working their way either North or South through Central America. During our time on the Corn Islands, we did not come across many of these travelers at all. Mostly couples and families who were either on vacation or were seriously into diving.

During our stay on the Corn Islands, we spent  shockingly over our budget. This was a full-blown Caribbean vacation rather than just another place to travel to, putting both Big Corn and Little Corn Island out of reach of the average backpacker. 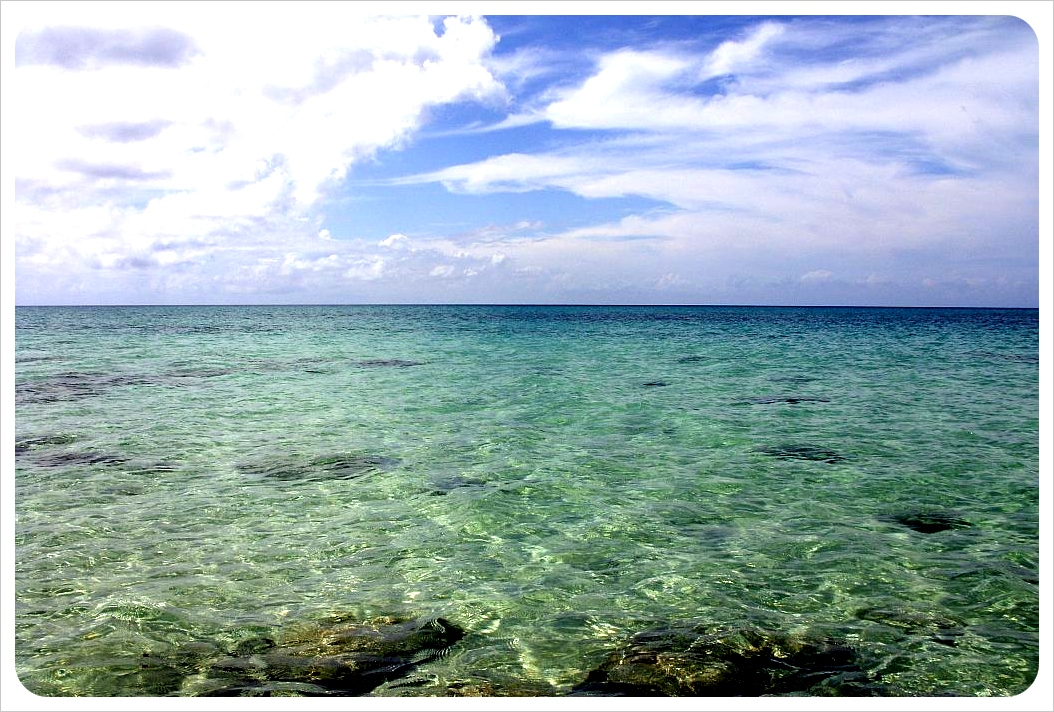 The journey to arrive on the Corn Islands is either complicated or generally above a backpacker’s budget. Travelers can choose to take the six hour bus ride east from Managua through the jungle and the Moskito coast to Bluefields, overnight, and then take a choppy five to eight hour boat ride to Big Corn island which comes out cheaper than booking an $170 round-trip flight from Managua to Big Corn… but not by enough to make that trip worth it. Once you get to the islands, you can stay to a strict budget, but it is a challenge. All basic supplies are flown in and therefore more expensive and hotel rates run high. Travelers on a tight budget should stick to San Juan del Sur (or all of Costa Rica) for beaches, wait until the Mexican Riviera Maya where the sand is just as white, the water just as deliciously chartreuse and there are plenty of hostels just a short walk from an easy to reach bus station.

In general, is it worth it to visit the Corn Islands?

The snorkeling and diving off Belize or Honduras is better, the Caribbean feel can be had in  Bocas del Toro (Panama), Costa Rica’s Caribbean coast (Puerto Viejo / Manzanillo) or on Caye Caulker in Belize for less money and with less effort. However, if you’ve got the extra cash or the desire to check off one of the 1,000 places to see before you die off your list, go for it.

If you are a frequent Caribbean traveler who is tired of the culture-less package deals, then a trip to the Corn Islands is worth it, just to see the unchanged multi-lingual, multi-cultural mix that is truly Caribbean and at the same time 100% Nicaraguan, then the Corn Islands, both Big Corn and Little Corn, could not be more worth a visit. 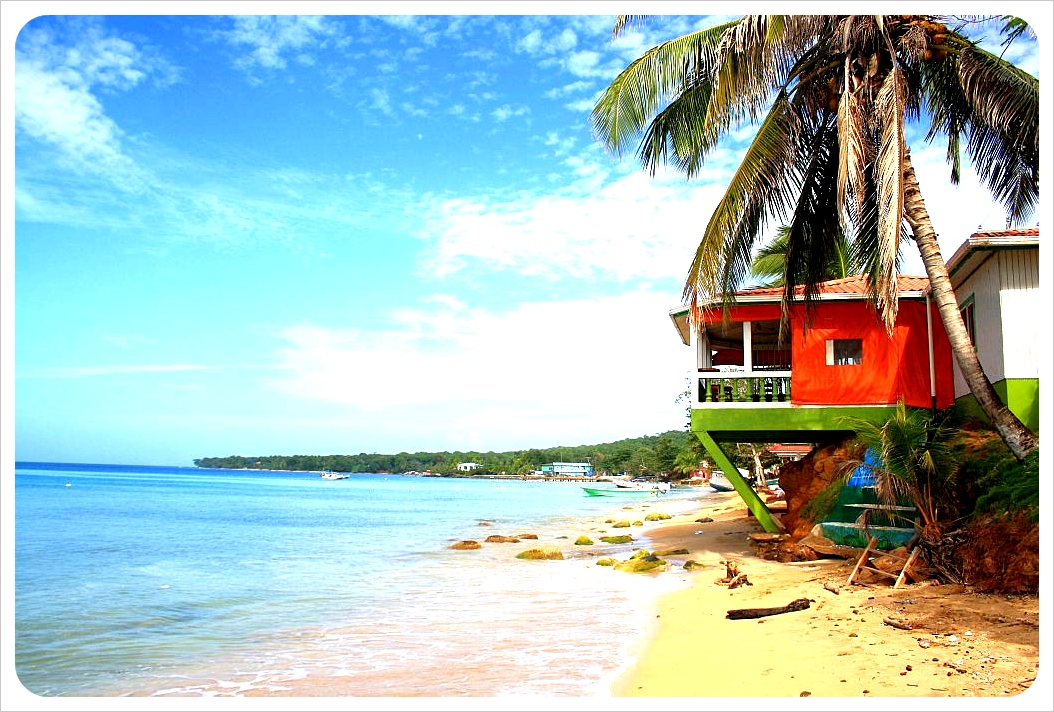 If you decide to visit the Corn Islands, check out our post: Big Corn vs. Little Corn Island. 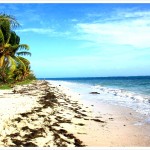 New York City Attractions: Which ones are worth a visit, which ones should you skip?
Click here to cancel reply.

Hi I am going to corn island in the middle of July. I'm now wondering if it's not a good idea because of the mosquitos. I read that it rains most of July. Can anyone share they're experience from being there in July?

I recently visited Big Corn island and experienced pure paradise. My trip to Little Corn was disappointing as it reminded me more of a spring break fling in Florida as opposed to the quiet little enclave I had heard about. It definately was NOT more laid back than Big Corn. Smaller yes, laid back, no.Now this is probably related to the wonderful scuba diving as well as the abundance of powder cocaine straight off the St Andres/Little Corn drug route. As i am not into a bunch of gringos running around half naked flying off of coke I will stick to Big Corn. Just an old heads observation. Party on Little Corner’s!

Hi Nat, thanks for sharing! I am surprised to hear that you didn't like Little Corn and wonder if it's changed since I visited. Doesn't sound at all like the little paradise I went to!

[…] For those who love a good Central American and a mix of Caribbean escape, Little Corn Island is an absolute must. Still not sure? We love this look by Globetrotter Girls: Are the Corn Islands Worth A Visit? […]

I disagree about the night life. I spent the last summer there and there are certainly places to party! (Happy Hut etc..) You just have to be willing to go mingle with the locals. Also it is very cheap if you stay at hostels rather than hotels...or pitch a hammock in the mango trees. Cheers!