Sightseeing in New York City can feel overwhelming – there are just too many things to do! Famous landmarks, tourist attractions, museums and galleries, parks and neighborhoods, and let’s not even get into the city’s food scene. You’d need months to explore the city properly, but let’s face it: Most of us just don’t have the time (or money!) to spend more than a few days in The Big Apple. If you only have a couple of days, what are the must-see tourist attractions in NYC that you cannot miss? 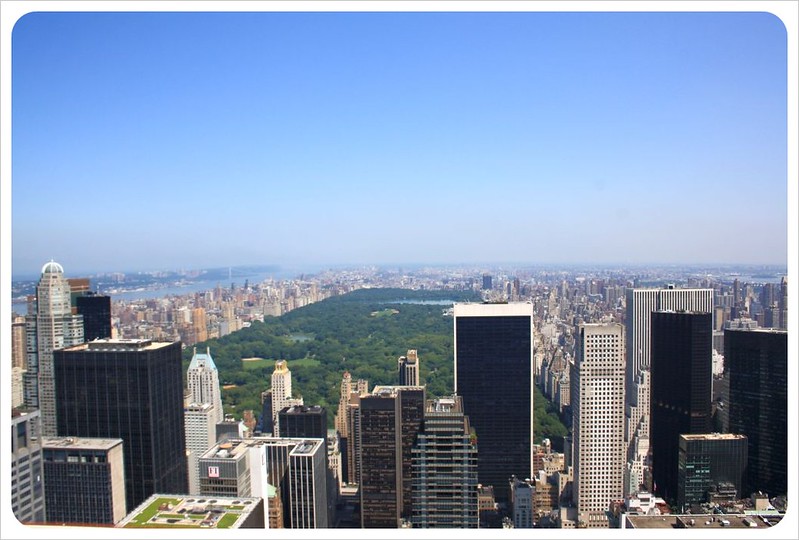 Here are five NYC attractions that I think everyone traveling to New York should see – and the best part: most of them are completely free to visit!

The Statue Of Liberty is one of the most iconic monuments – not just in New York, but in all of the United States. The famous statue was gifted to the U.S. from the people of France, commemorating Franco-American friendship. When the statue was welcomed to its new permanent home on Liberty Island with a festive ceremony on 28 October 1886, it also celebrated 100 years of America’s independence.

The height from the ground to the tip of her torch is exactly 305 feet and one inch (92.99 meters), Lady Liberty has a 35-foot waistline, and an 879 shoe size! A highlight for many is to visit the statue’s crown, but be warned: to enjoy the epic views from one of the 25 windows inside the crown, you have to walk up 354 steps (that’s the equivalent to TWENTY stories in a building!). You also have to make a reservation way in advance, because tickets for the crown are limited and they sell out quickly. 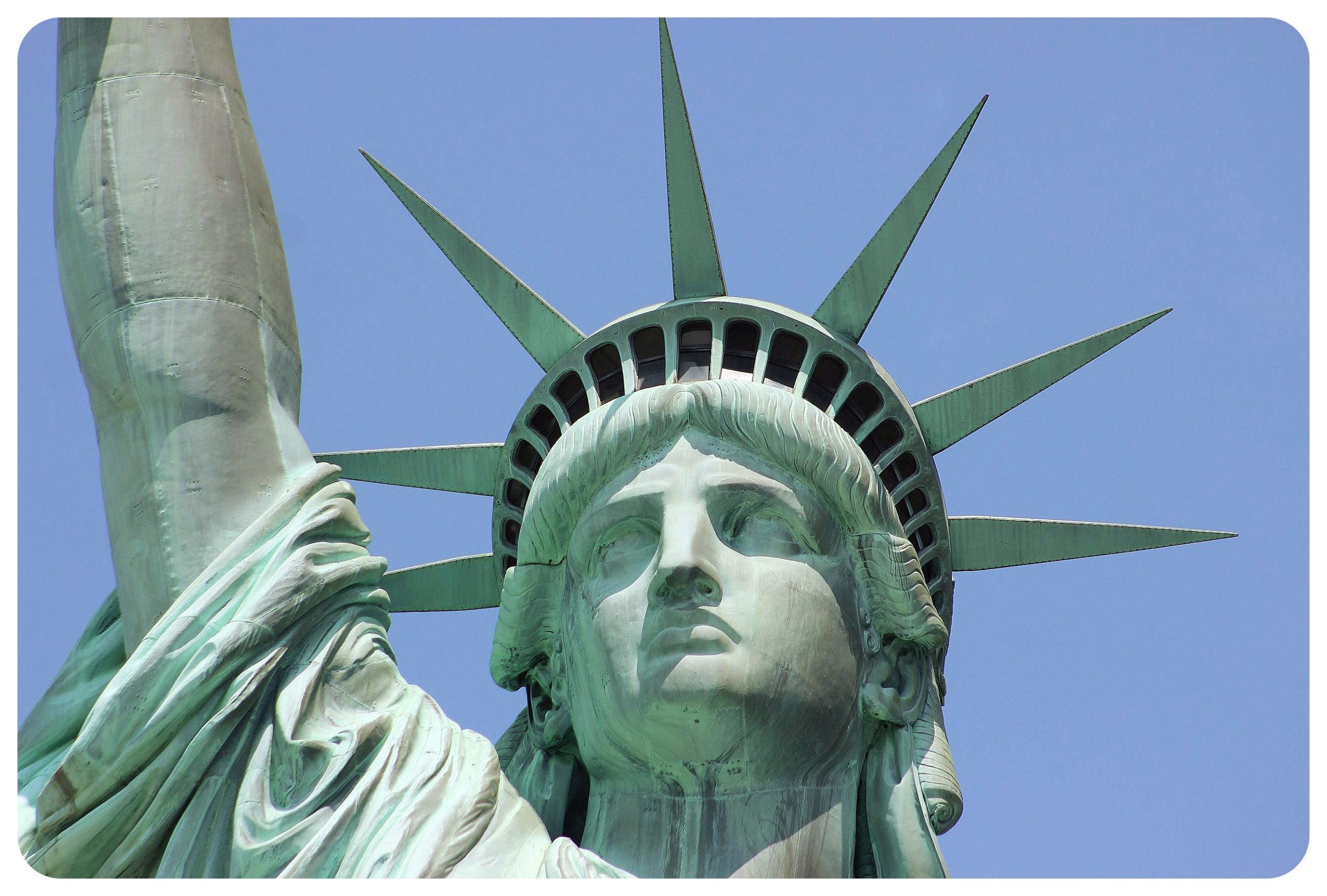 There are several ways to see the Statue Of Liberty: you can simply go past it on the Staten Island Ferry (which is free) or take a sightseeing cruise. To get up, close and personal with her, you will have to visit Liberty Island (the island on which the statue stands). The island can be reached via ferry from Manhattan, and there is only one company that runs these ferries and is allowed to dock at Liberty Island. The ferry boats all stop at Ellis Island as well, which is where you can visit the Immigration Museum, housed in the former immigration processing station. You can visit the islands with a guided tour or independently (just paying for the ferry). The advantage of a guided tour is that you get insightful commentary on both islands; and learning more about the fascinating history and other facts about the statue makes the visit more meaningful than just wandering around Liberty Island.

The tour I took included a 30-minute tour of the monuments in Battery Park (where the ferry leaves from), an hour on Liberty Island (including a small museum detailing the construction of the Statue) and as much time as we wanted on Ellis Island. The Immigration Museum is quite large and we spent well over an hour learning about how life in America began for the immigrants that arrived on Ellis Islands between 1892 and 1924, when Ellis Island was America’s largest and most active immigration station, processing over 12 million immigrants. 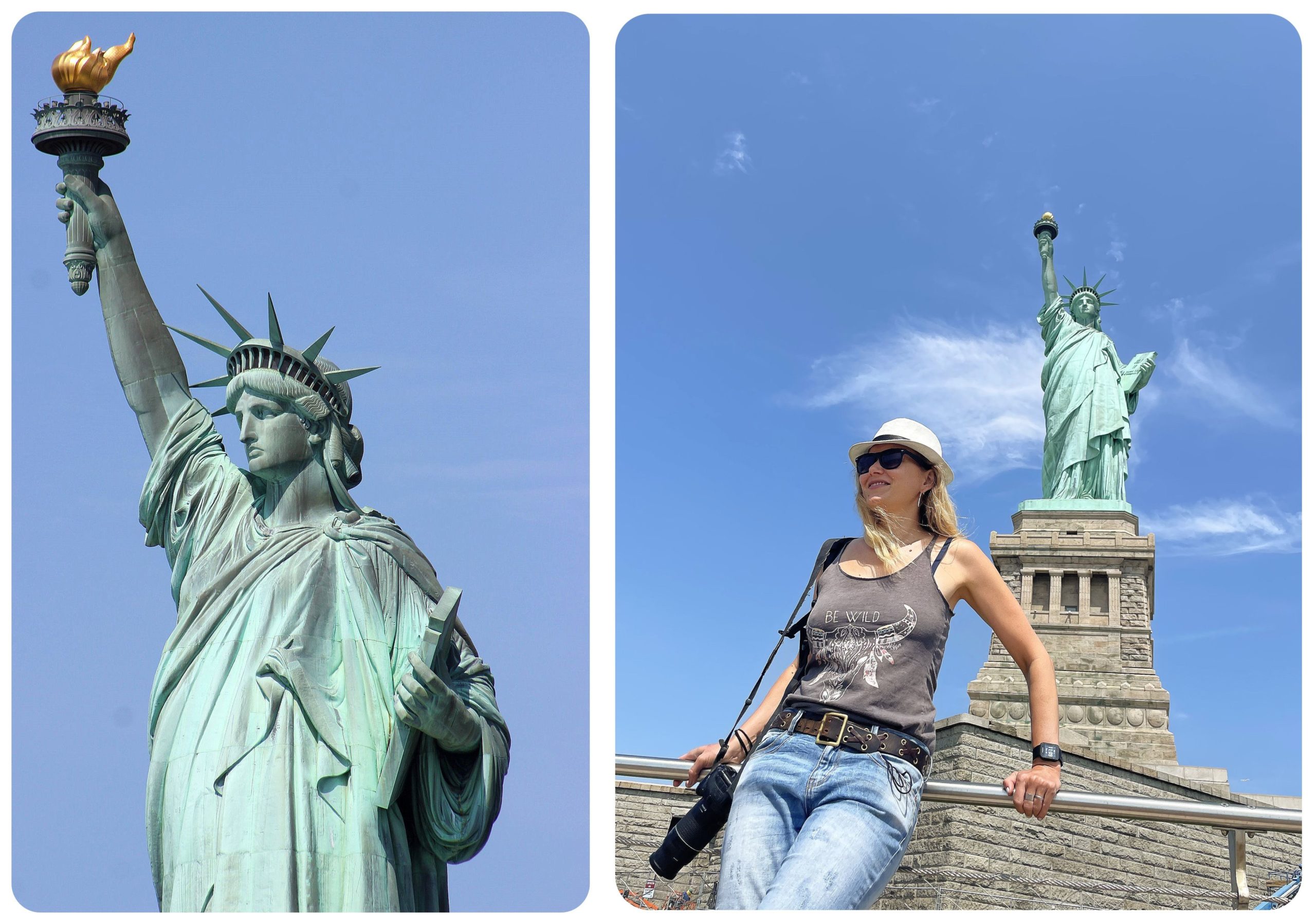 The Brooklyn Bridge is another New York icon – and there’s no better way to truly appreciate this architectural marvel than to walk across it. Standing below the gigantic 278 feet (85 meters) tall Gothic Revival granite towers never fails to impress, and the elevated walkway made of wooden planks makes it easy to imagine how excited people must have been when the bridge opened back in 1883, after nearly 15 years of construction. 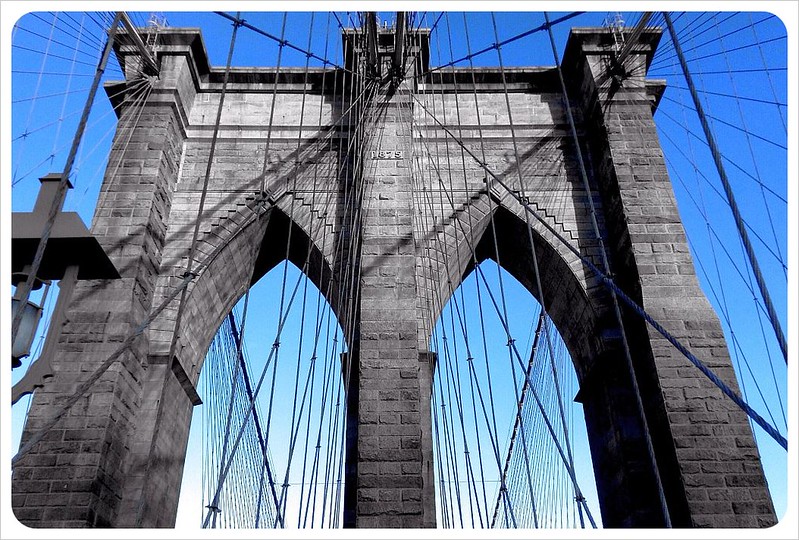 Back then, Brooklyn and New York were still separate cities, and the Brooklyn Bridge was the very first bridge to connect the two cities, enabling people to cross the East River on foot or by horse carriage. At the time of opening, it was the longest suspension bridge in the world, with a span of 1,595.5 feet (486.3 meters). In total, the Brooklyn Bridge is 6,016 feet (1,834 meters) long, and the pedestrian walkway is about 1.1 miles (1.6 kilometers) long. It takes about 25 minutes to cross the bridge if you don’t stop for photos and walk at a brisk pace, but I suggest you plan in about 45 minutes for the walk so that you can enjoy the stunning vistas and take pictures of this architectural wonder.

On its opening day on 24 May 1883, over 150,300 pedestrians and 1,800 vehicles crossed the Brooklyn Bridge. Initially, pedestrians had to pay one penny to cross. These days, around 100,000 cars, 4,000 cyclists and 10,000 pedestrians cross the bridge every day and is completely free to enter – no matter if you’re walking or driving across.

Tip: I recommend walking from Brooklyn to Manhattan, instead of starting in Manhattan, which is what most people do. That way you’ll get the incredible skyline view the entire time, and the Manhattan skyline is definitely more impressive than Brooklyn’s skyline. The closest subway stations to the pedestrian walkway access are High Street (on the A/C), Clark Street (on the 2/3) and Jay Street (on the F line). The pedestrian stairs are located at Washington Street and Prospect Street, right below the Brooklyn Bridge, at the northern corner of Cadman Plaza. 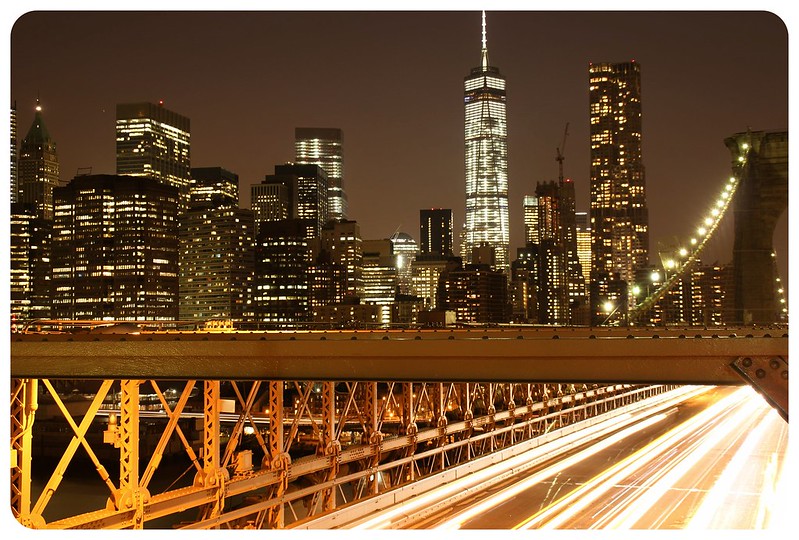 Central Park is one of the best-known city parks in the entire world, and no matter what time of year you’re visiting New York, a walk or bike ride through Central Park should be included in your itinerary. The park, which is the most visited urban park in the U.S., welcoming over 42 million visitors every year, spans 843 acres (3.41 km2). This makes it larger than the country of Monaco! You can spend hours in the park, which offers 58 miles (93 kilometers) of trails, seven bodies of water, and twenty-six baseball fields. Tip: Some of the best places to visit in Central Park include Belvedere Castle and Turtle Pond, Central Park Lake with the famous Bow Bridge, the Alice in Wonderland sculpture, Bethesda Fountain and Bethesda Arcade, and Umpire Rock for great views of the Midtown skyscrapers south of the park. There are several observation decks in New York, but the Empire State Building is without a doubt the most famous one. It was built from 1930 to 1931, finished in less than 14 months, which was considered astonishingly fast at the time. The famous skyscraper is 1,250 feet (380 meters) tall, and if you count the spire and antenna, it measures an impressive 1,454 feet (443 meters). It was the tallest building in the world until it was surpassed in height by the World Trade Center in 1970. It has two observation decks: on the 86th and 102nd floors. It is still the 4th tallest building in New York City, and the 6th tallest in the U.S.. On a clear day, six states are visible from the observation decks: New York, New Jersey, Pennsylvania, Connecticut, Massachusetts and Delaware. 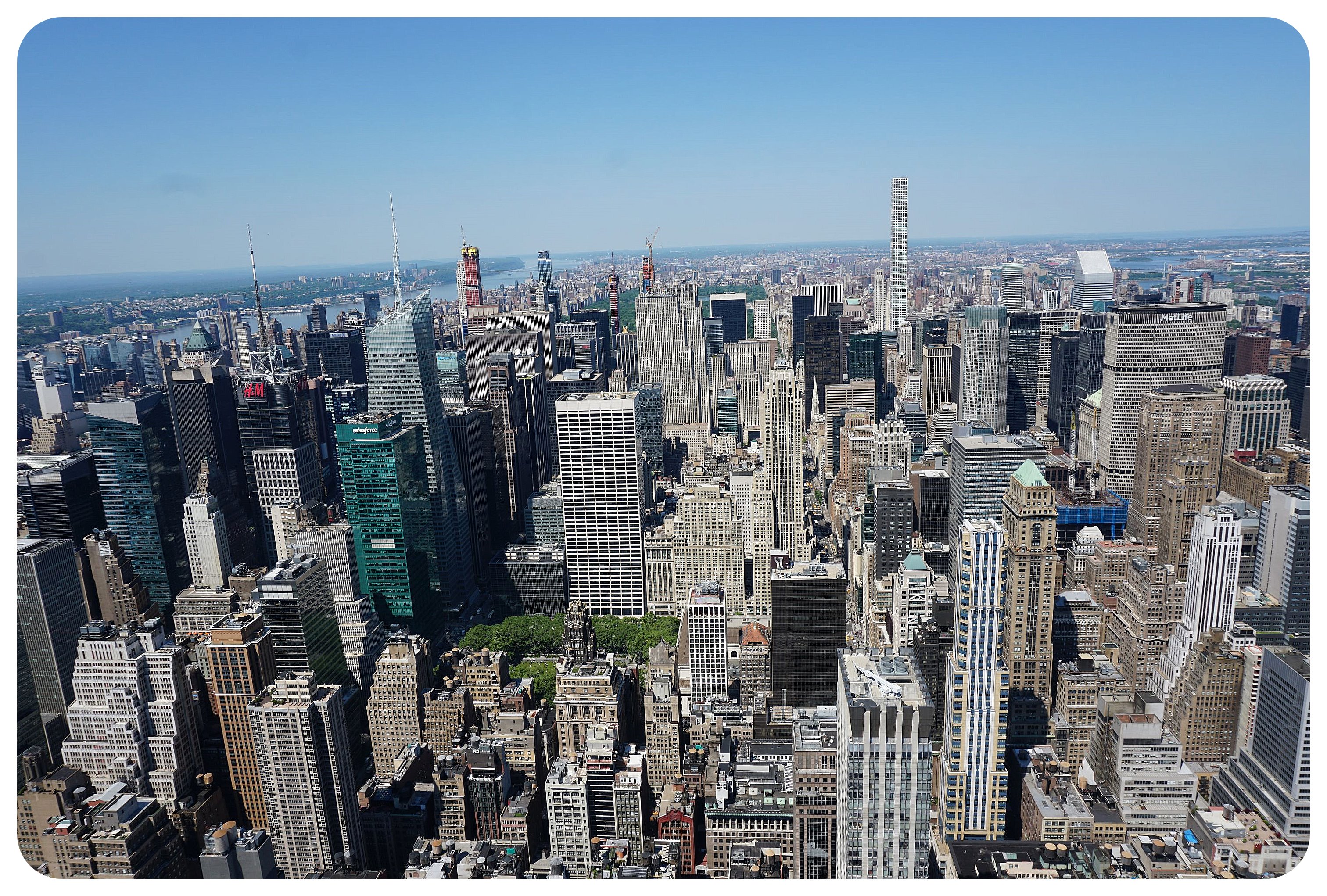 Is Times Square touristy? Absolutely! But it is also one of the most famous squares in the world, and you have to see it at least once. Times Square is famous for a reason, after all, and it is hard not to be impressed by all the massive billboards, the lights, and the high rises surrounding the square. Did you know the buildings in Times Square are required by law to have a minimum amount of display lighting? 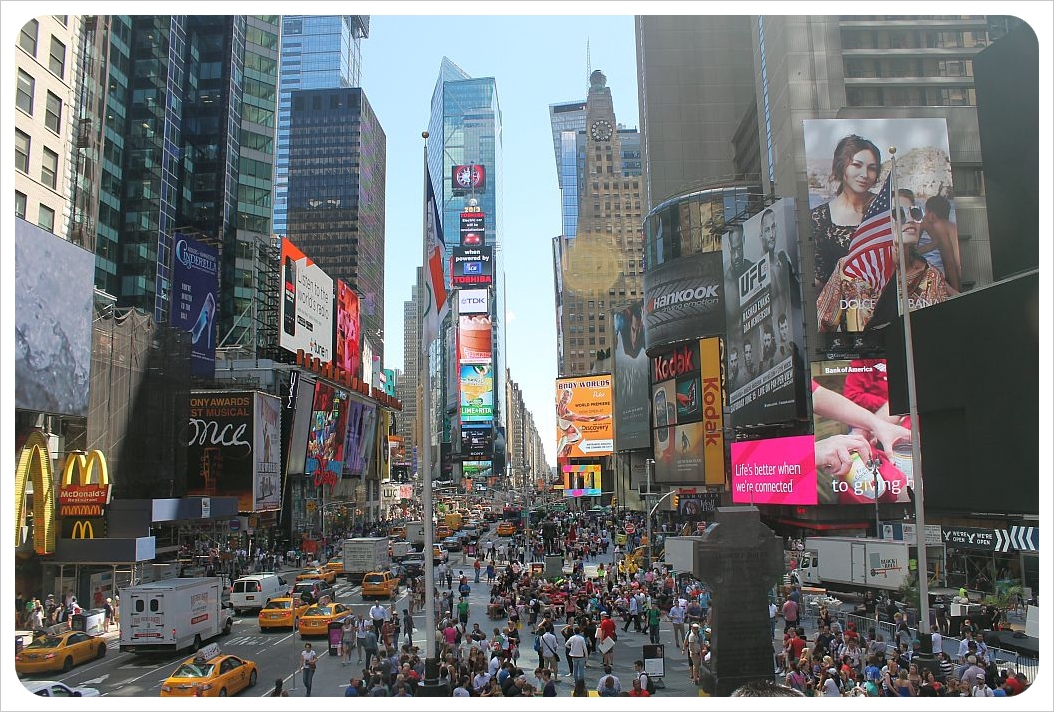 340,000 people pass through Times Square every day, so if you don’t like crowds, I recommend visiting Times Square later in the evening, when most tourists have gone back to their hotels. If you want to experience Times Square with as few people as possible, head there in the early hours of the morning, just after sunrise, or very late at night – midnight or even later. The best place to take it all in are the Red Steps in Father Duffy Square, a small triangle between Broadway and 7th Ave, between 46th and 47th Streets. Sit down on the steps and marvel at the glitz, the bustle, and the chaos around you – it’s hard not to be awed by the unique energy Times Square has.

Tip: Stay away from all the touristy, mediocre food options in Times Square. For a quick snack, stop at Joe’s Pizza on Broadway (between 40th and 41st Streets), but for a full meal, head over to Hell’s Kitchen. There are plenty of good restaurants on 9th Avenue, between 42nd and 57th Streets. 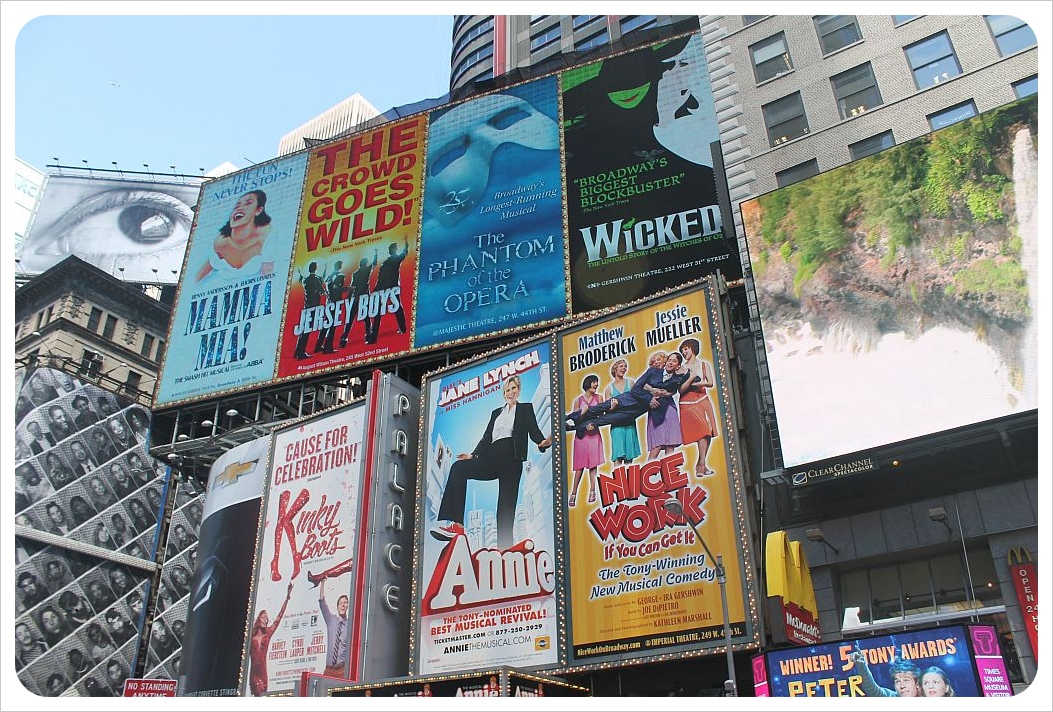 The Best Attractions to Enjoy In New York’s Five Boroughs

Polaroid Of The Week: Sunset over the Statue Of Liberty
Click here to cancel reply.