On our first visit to Bangkok, we couldn’t wait to leave. We may have given up on the Thai capital a bit too quickly after a combination of being scammed and the need to escape floods that were due to hit the city any day, but after just a few days, we headed down south for a few weeks of island hopping instead. Last month we booked flights to Bangkok again, ready to give the city a second chance. This time we would be checking out a new part of the city: Bang Nampheung. Good thing we did, too, as it was love at first sight. Had we not stayed at the fabulous and brand new Bangkok Tree House, we would have never set foot in that area of southern Bangkok, on the west bank of the Chao Phraya River. After having spent a few days in the Sukhumvit area, home to mega-malls, hotels, high-rise apartment complexes and bars and nightclubs, we crossed over the Chao Phraya River and within five minutes we were worlds apart from the buzzing metropolis, surrounded by palm trees and silence, save for the chirping of birds. No bridges connecting Bang Namphueng with the east side of the river means that developers are reluctant to buy up land in this part of Bangkok, which has helped it maintain its village feel. The area along the banks of the river forms miles of lush green swampland. Although the land seems uninhabitable, the amphibious locals have created raised cement sidewalks that snake in and around neighborhoods that all eventually connect up to large main roads. We took out a pair of bicycles to explore the area and within just a few minutes managed to see one of the largest lizards we have ever seen scrambling back into the water as we rode by. This happened just a hundred yards from the Wat Namphueng Nok, with its big fat Buddha statue and little market stalls surrounding it filled only filled with locals. There was not a single tourist to be seen anywhere. – entirely out of character for most other areas of Bangkok. From the temple, we followed along what appeared to be a main road for a while before eventually getting lost in a neighborhood, quite a few of which were offering homestays. The whole time, we find ourselves in the untouched wilderness; Bang Namphueng truly lived up to its nickname ‘the green lung of Bangkok’ with its wildlife, jungles and waterways. Deep in the center of one such neighborhood we came across the Herbal Joss Stick house, privately run by an adorable husband-wife duo who immediately welcomed us and gave us a tour of their home and gardens. The woman showed us how she makes herbal joss sticks, which are like incense to ward off mosquitoes, not letting us leave without a pack of her handmade joss sticks each. She also runs Thai cooking classes, while the husband offers cycling tours through the area in his down time from teaching at a Bangkok university. This older couple was remarkably geared up for tourism, but we are not sure how many tourists ever come here, as didn’t spot another western face the entire afternoon. In fact, the entire Bang Nampheung area feels almost completely undiscovered, save for the newly created Bang Nampheung floating market, which is said to bring quite a few visitors to this part of Bangkok every weekend. Even though we were not there during the weekend to experience the Floating Market, we were lucky enough to see a ‘Riding Market’ for the first time – because many of the neighborhoods are so far from any major markets and supermarkets, a pick-up truck goes up and down the main roads every day selling fresh vegetables and fruit to the locals of Bang Namphueng. After a couple of hours of exploring, we were ready for coffee, as usual, but dreaded the thought of attempting to find a  proper coffee shop in this neck of the woods. We should have known better, as Thais love their coffee! We actually found a trendy coffee shop called Coffee Professionals. The barista served us two perfectly prepared coffees, and we scarfed down home-made cookies and sunk in to some serious people-watching before heading back to our tree house. We arrived just in time to see the sun set behind the palm trees and couldn’t believe that we were actually still in Bangkok. How to get to Bang Namphueng from Central Bangkok 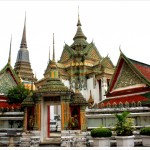 We just got back from our day at Bang Namphueng. Definitely worth the short trip over. The weekend market was packed full of people (you'd be worried if it wasn't). Lots of great options for food, especially sweets, and very few other foreigners wandering around. My only other comment is that the "floating market" bit, according to the signs there, may be a bit of a misnomer. Someone out for a true floating market would be best served to check out the other more popular (if more touristy) options. Nonetheless, a great respite from the usual hustle and bustle in central Bangkok for those without the time to get out of the city on the weekend.

Thanks again for the tip!

Thanks for the feedback, Aaron! :) Glad to hear that you enjoyed the trip over there. You are right about the floating market, it is not like the more touristy ones, but still a great experience!

This looks great--I had no idea. Going this weekend, thanks for the tip!

Aaron - enjoy! And let us know how you liked it :)

I just head back from Bangkok today. What a pity to come across this only now. I couldn't wait to get out of Bangkok when I first set my foot on it too and quickly head up north to Ratchaburi. Definitely checking Bang Nampheung out the next time I'm there! Thanks for sharing : )

Stephanie - what a shame that you discovered our post too late :( Hope that you'll have the chance to visit Bang Nampheung next time you're in Bangkok - it'll change your picture of Bangkok a lot! The first time we visited we couldn't wait to get out of Bangkok either ;-)

Hello girls! Bangkok is one of my favourite cities anywhere...but for me, it was love at first site. However, I've never been to Bang Nampheung. Next time (later this year!), I'm hitting it for sure (just book marked this page for reference!).

Nate - great to hear that! I am sure you will love it.

Wow. World's apart from the rest of Bangkok! I'll be back there in the beginning of April. I need to check this out!

Yes, you need to check it out. Indeed worlds apart from the rest of Bangkok - you won't be able to tell you're in Thailand's capital! Try to go on a weekend so that you can visit the Floating Market.