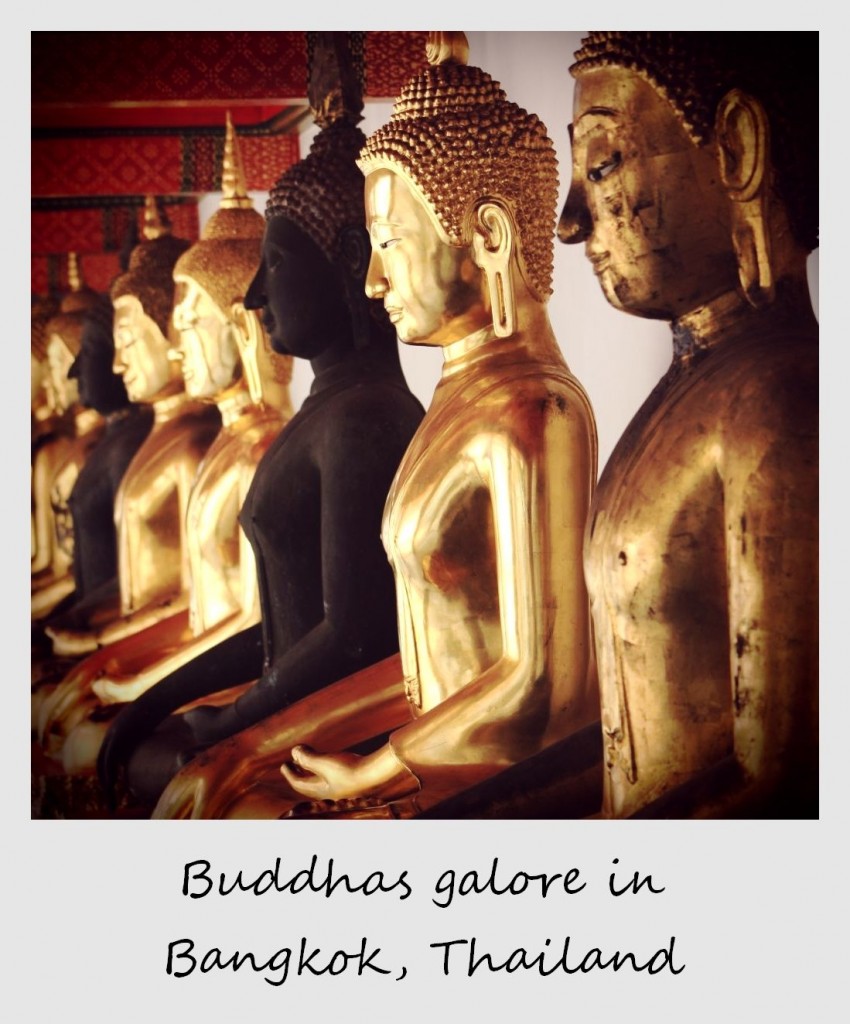 Between the blaring horns, speeding scooters, whizzing tuk-tuks on the buzzing streets and the overall constant bustle of Bangkok, the Buddhist temples (and there are hundreds of them) provide perfectly peaceful havens to escape it all.

After six months traveling in North America and Europe, our arrival in Thailand’s capital city slapped us with quite a bit of culture shock at first, but we adapted quickly by jumping into a tuk-tuk and touring a few of Bangkok’s beautiful temples, or wats, as they are called in Thai. We would whip along main roads and around back streets in the open-air tuk tuks, only to arrive minutes later to near-silent temples with spectacular golden Buddha statues, known as Buddharūpa, which means Form of the Awakened One. Some wats have a particularly large golden buddhas, as high as 32 meters, either standing or reclining, while others instead have a number of buddhas lined-up together in the cross-legged lotus position, like the ones pictured above.

Watching the Buddhists paying respects and bringing offerings at any hour of day, and witnessing the monks collecting the alms in the early mornings has been like a very easy crash course to this fascinating culture and a great way to begin our travels through Asia.

Hey ladies! Just catching up on your posts...am so excited/jealous that you're in Asia! Can't wait to read your thoughts on it all. I'm hoping to be back there briefly early next year but I'm stuck in Sydney for the next little while. Let me know if you'd like any tips, particularly on India and Nepal if you're headed that way.

And you're really close to Australia now...come to Sydney!! :)

Hi Megan - you're right, we're not far from Sydney at all! The closest we've ever been to Australia :) We're not sure yet if we'll make it to Australia this time around but if we do, it would be great to have you show us around Sydney and share some tales from Latin America! We're planning to travel to India next spring, and we'd be happy about some recommendations & advice!

Great picture. I've never been to Thailand but it's on my list, as soon as I return to Vietnam. are you guys going there?

Hi Rich - yes, we will be visiting Vietnam on our tour through South East Asia and we are very much looking forward to it - I have a feeling we will LOVE the country!

The Buddhas in Thailand are beyond amazing! LOVE this shot, I took a similar one.

Thanks Andi! We love the Buddhist culture, the Buddha statues are all so beautiful and the people are so devoted to their culture.