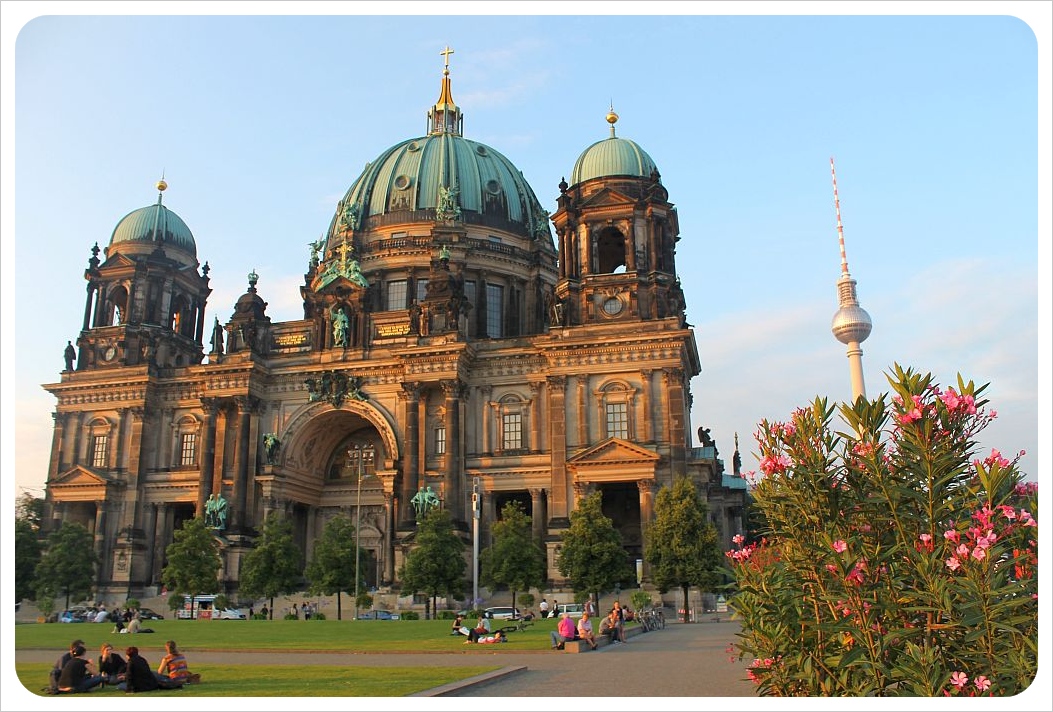 I’ve talked about Berlin a lot on this site, providing you with some useful guides for the city (check out:

1 Berlin is the vegan capital of Europe

This one is surprising – who would’ve thought that you’d find one of Europe’s most vegan-friendly cities in meat loving Germany? It seems like vegan cafes, bars and restaurants are popping up everywhere around the city, but I was skeptical when my friend Sam told me that Berlin was the vegan capital of Europe. A quick Google search revealed that he was correct though, and Berlin is in fact the city with more vegan restaurants than any other city in Europe, according to CNN. Germany’s first vegan supermarket chain, Veganz, was founded here, and Berlin is home to the biggest vegan festival in all of Europe. You can get vegan versions of the meat dishes that Berlin is famous for, doner and curry wurst, and you can get pretty much anything vegan: wine, cheese, ice cream, pizza… There are vegan versions of everything, and then there are of course the 60+ purely vegan restaurants and cafes in the city. 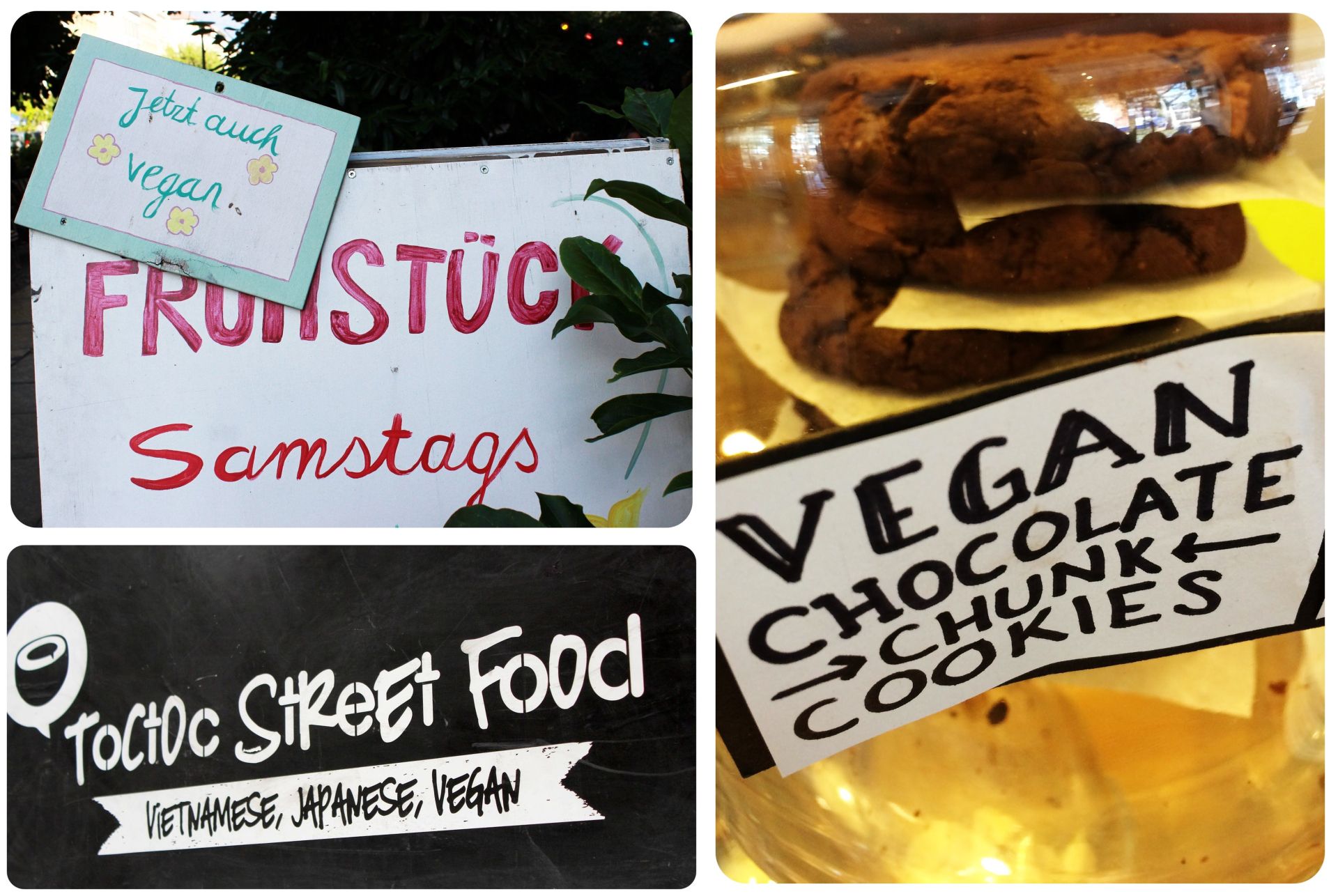 2 Berlin is not pretty

Compared to other European capitals like Paris, Budapest, Lisbon, Amsterdam, Prague or Ljubljana, which are known for their impeccable beauty, charming atmosphere and postcard-worthy photo opps around every corner, Berlin can only be called a city with some pretty corners at best. Gritty fits Berlin much better than pretty, and people traveling around Europe are often surprised when they get to Berlin and realize it’s not like the picture-perfect cities that they’ve got to enjoy in other European countries. That’s why Berlin isn’t for everyone – and I have to admit that it can be difficult to grasp the sprawling mess of neighborhoods. But if you make an effort to explore both the pretty and the less pretty parts, you’ll find that the city has much more facets than the cleaner, neater neighboring capitals. 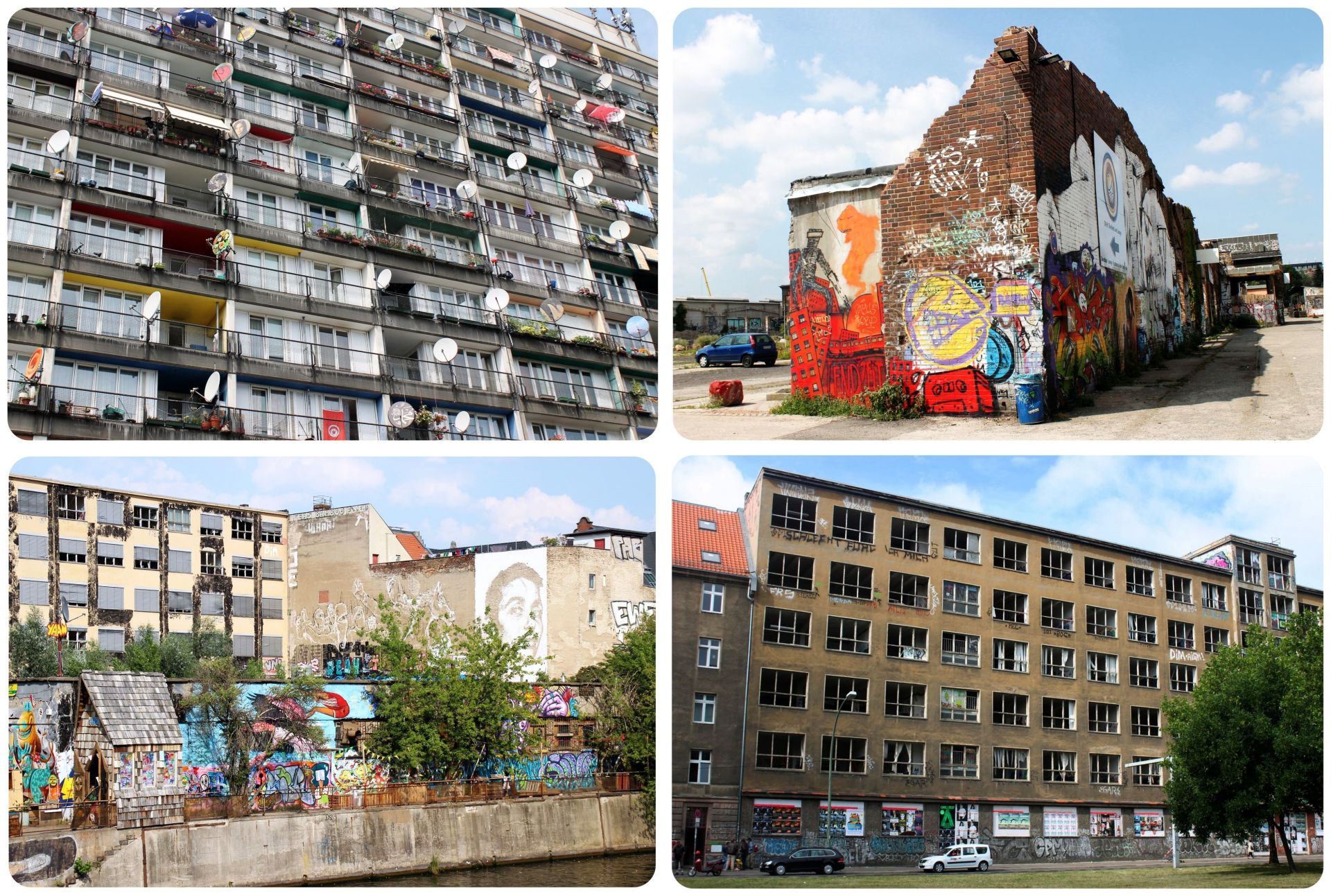 One thing that almost everyone visiting Berlin comments on is how quiet the city is. And I agree – I don’t think there are many cities the size of Berlin where you can find yourself frequently in tranquil, peaceful spaces. Even walking through the Mitte neighborhood (Central Berlin) there are a lot of spots where you feel more like you are in a small town rather than in Germany’s capital. And in the residential streets of Kreuzberg, Neukölln or Prenzlauer Berg, the only noise I found myself surrounded by was the chirping of the birds. Heavenly!

4 Berlin doesn’t have a skyline

Berlin doesn’t have much of a skyline – in fact, there aren’t any skyscrapers in Berlin. The highest building in Berlin is the omnipresent TV Tower at 1,207 ft (368 meters), which always peaks out from the lower buildings of the city. The Park Inn Hotel, right across from the TV Tower on Alexanderplatz, is one of the very few other high buildings in Berlin, but at 410 feet (125 meters) it is considerably smaller than the TV Tower. 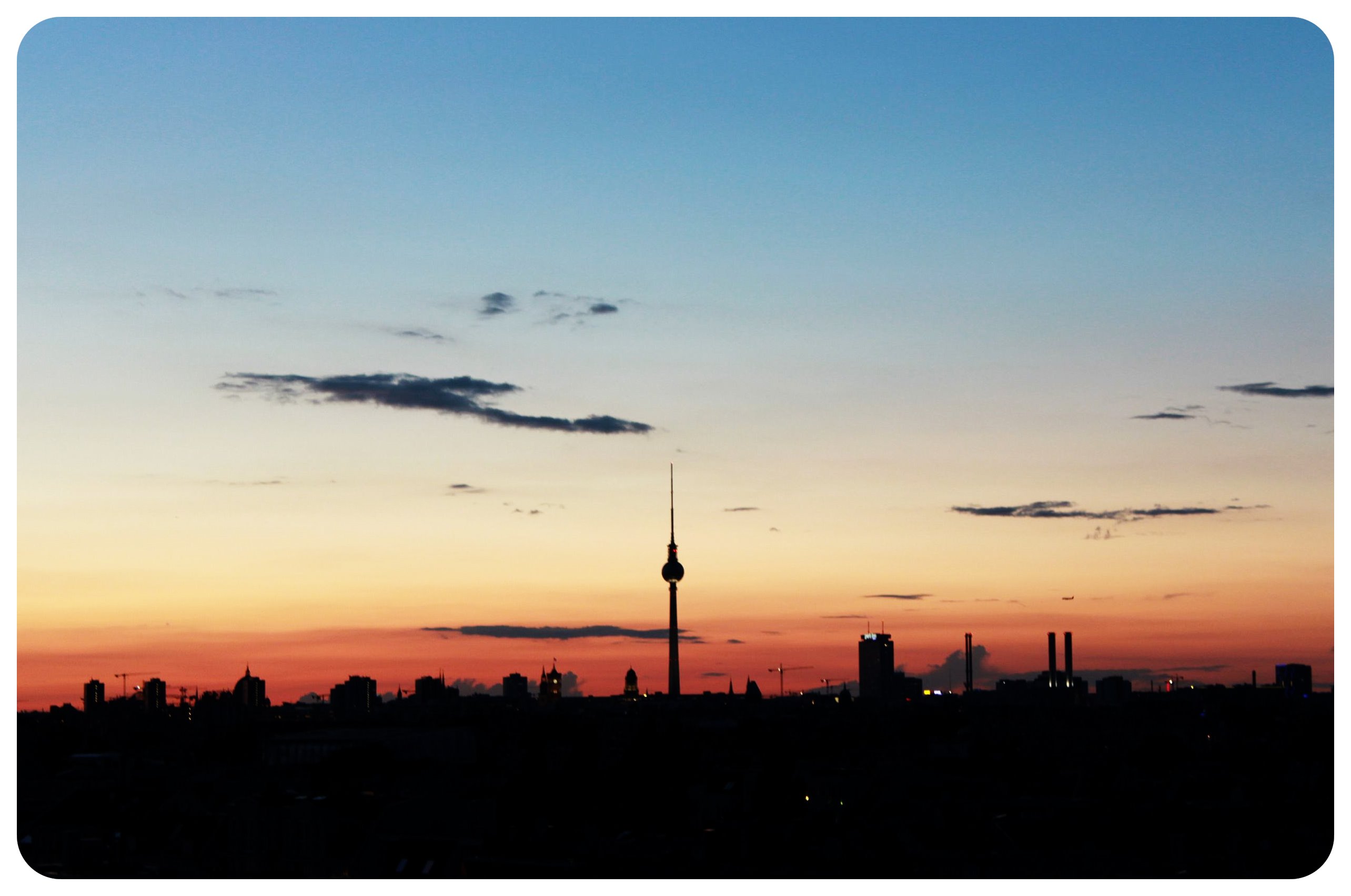 People are always surprised about just how cheap Berlin is, and I agree: having traveled all over Germany this year, I have to say that I have yet to find another city that has prices as cheap as Berlin. Food is super cheap, and drinks are moderately priced in most places – a large beer for €3.50 is seen as expensive, and €2 glasses of wine are not a rarity. Plus: groceries are cheap in the supermarkets, the Turkish Market in Maybachufer has the most inexpensive fresh produce I’ve come across in the whole country. Since many sights are also free, Berlin is one of the most budget-friendly cities in Europe.

And with that I don’t mean ‘smoggy’, no, I actually mean smoky as in cigarette smoke. Having spent so much time in the US in recent years, I am shocked every time I get to Germany and realize just how many people smoke there. The worst thing? Many bars have found loopholes to avoid the smoking ban, and so I find myself constantly surrounded by cigarette smoke when I go out in Berlin, waking up with hair that reeks of cigarettes. Ick. 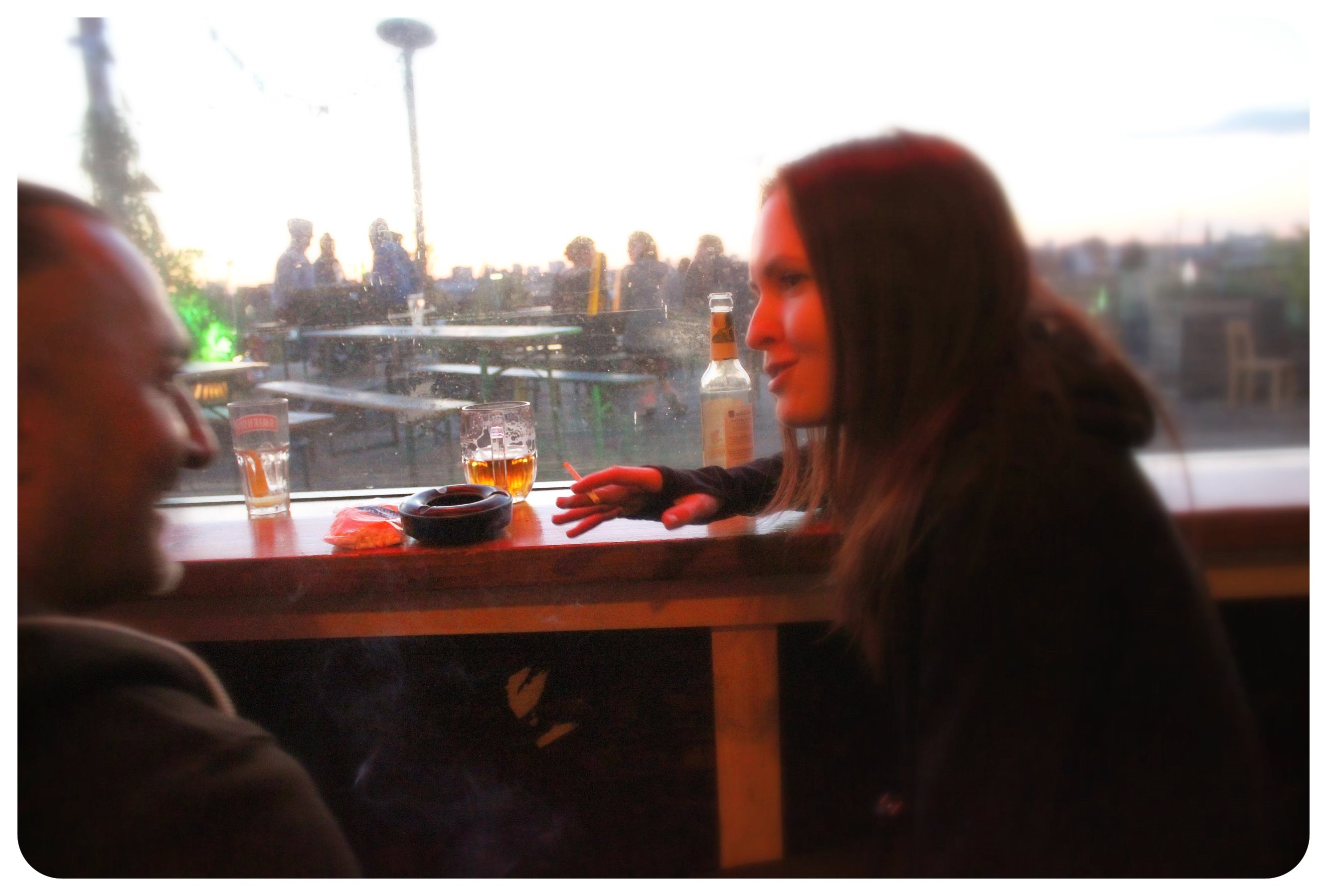 7 Everyone is drinking beer (everywhere!)

Everyone in Berlin is walking around with a beer bottle in their hands. Well maybe not everybody, but probably 90%* of people you’ll pass in Berlin, especially in Neukölln or Kreuzberg, are carrying an open beer bottle. And if not beer, then Club Mate, a popular hipster soda drink.. but if you ﬁnd yourself in Berlin, just look around you and you’ll notice that almost everyone has a beer bottle in their hands. The most plausible explanation for this is that a bottle of beer is usually cheaper than a bottle of water, so why not enjoy a bottle of ﬁne German beer? But why not enjoy a beer at any given time, considering that it’s cheaper than a bottle of water?  And yes, it is completely legal to booze in public, and Berliners take advantage of that privilege all the time – more so than in most other German cities. 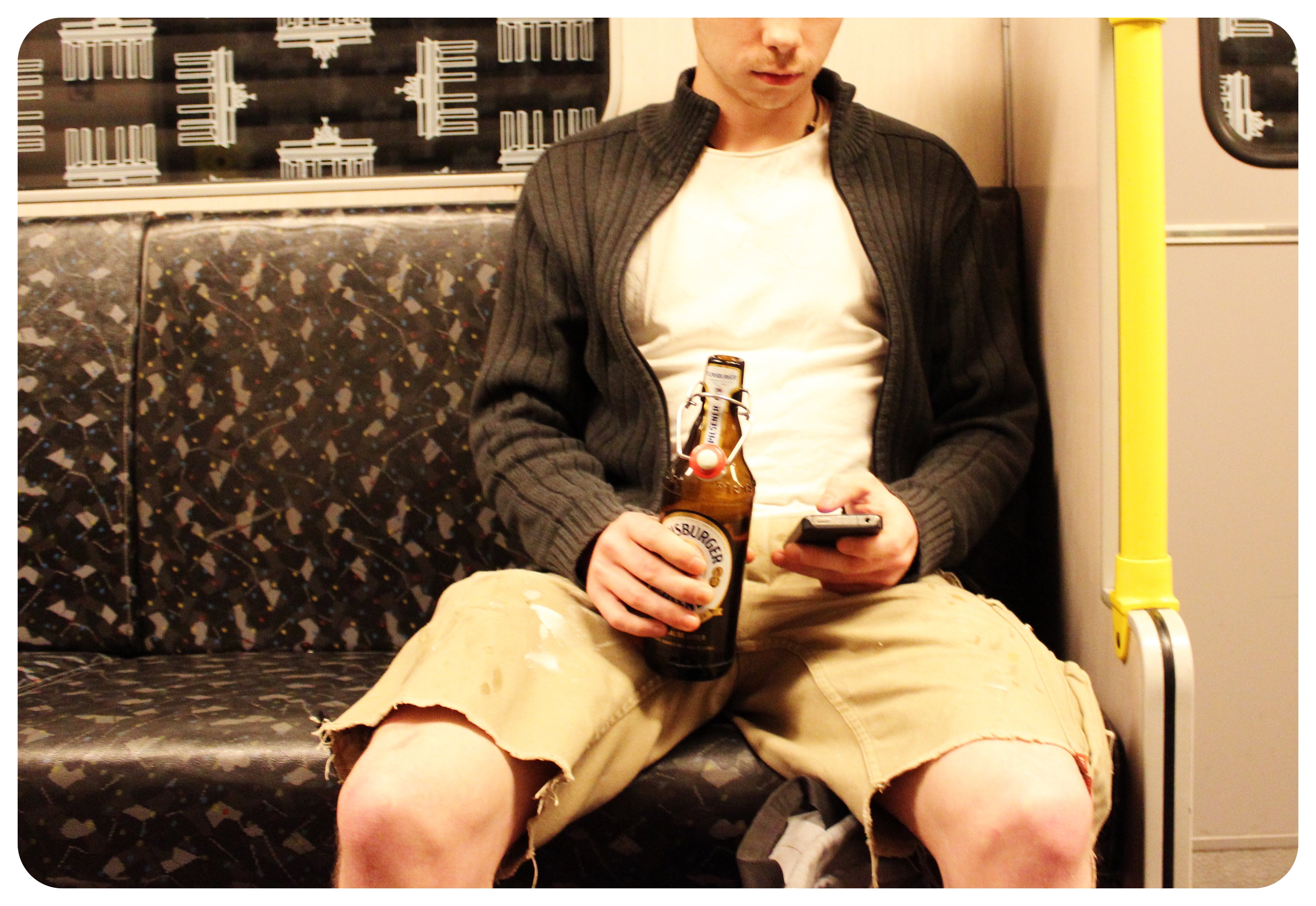 8 Finding German food in Berlin can be tricky

When my friend announced she wanted to try some German food, I broke out in a sweat. Where the heck could we sample some German food that goes beyond the ubiquitous currywurst? Berlin has so much ethnic food – Turkish, Vietnamese, Indian, Lebanese, Indian, Thai, Mexican.. you can find pretty much any cuisine you’re craving. But German food options seem to be few and far between. And even though you’ll discover that there are quite a few German restaurants once you start looking for them, be warned: not all of them are great. The quality varies drastically! If you find yourself in Berlin and hungry for German food, check out Dicke Wirtin, Zeit fuer Brot (their bread is amazing!), Schwarzwaldstuben and Marjellchen. 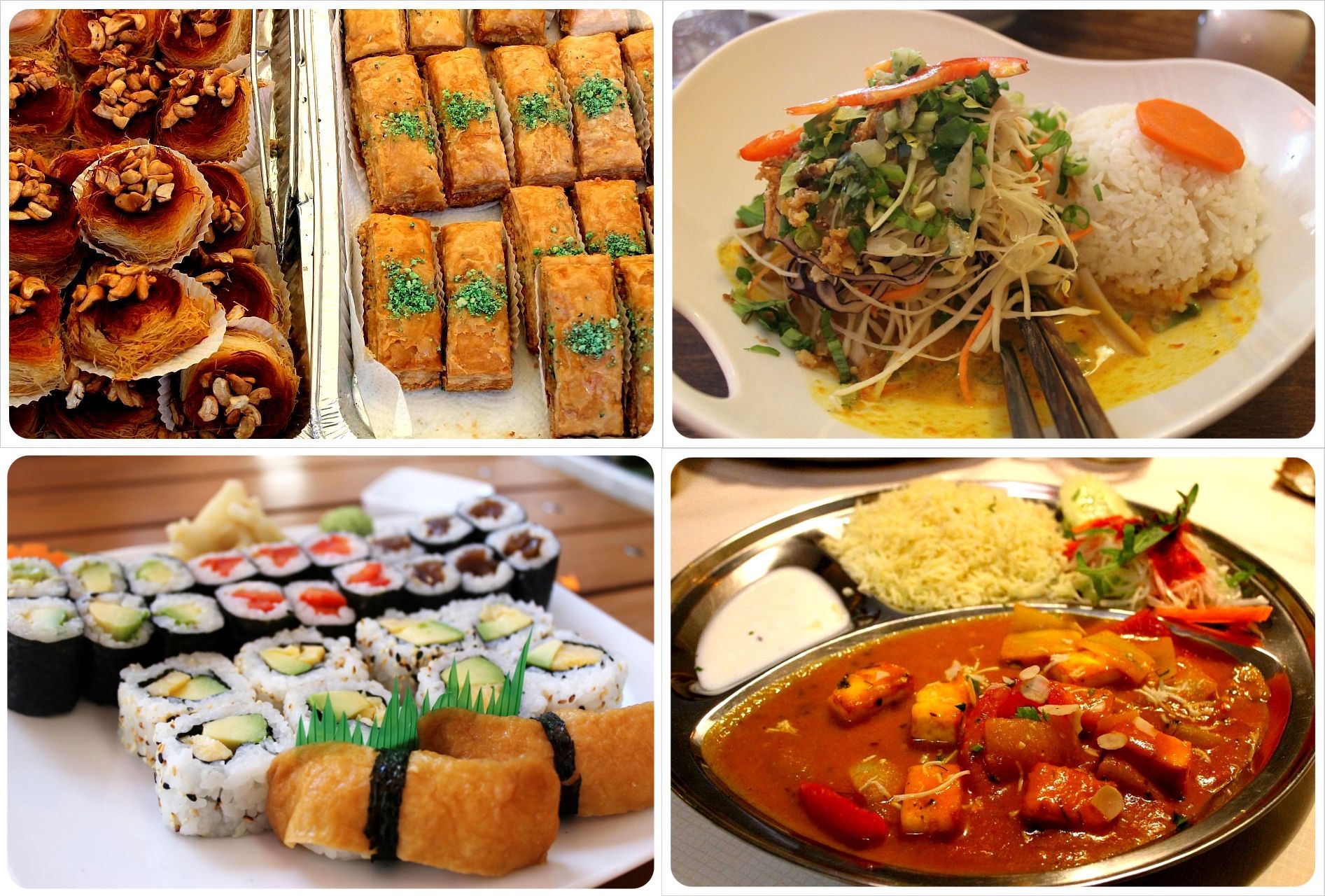 While we’re talking about food: one thing you won’t ever have difficulties finding is the doner kebab, a national treasure when it comes to German fast food. Even though the kebab is a type of Turkish kebab, made of meat cooked on a vertical rotisserie (similar to the Arab shawarma) some people claim it was invented in Germany, and the Wall Street Journal states that There’s Nothing More German Than a Big, Fat Juicy Döner Kebab. Yes – the döner, how the Germans call it, is popular not only in Berlin but throughout the entire country with over 17,000 doner slingers, and it even outsells hamburgers and sausages, taking the #1 spot for fast food in Germany.

Apparently there are more doner stands in Berlin than there are in Istanbul! You can’t go to Berlin and NOT have a doner – and the fight for the title of ‘Best Doner In Berlin’ is an ongoing one. Opinions vary (ask a group of Berliners what their favorite doner place is and it’s likely you will trigger a dispute among them!), but here are The Guardian’s 2016 picks for the best doner in Berlin, Thrillist’s best doner spots in Berlin, and Berlin Food Stories’ favorite doner places.

10 Berlin is cash only

Try to use plastic in Berlin – and you’ll get frustrated quickly. Germans do not like credit cards (or even debit cards) and Berlin is no exception here. Whenever I visit and try to pay by card, I get to hear ‘We’re cash only’ almost every time. Cash is king in Berlin, so get out a huge chunk of Euros as soon as you arrive. I am not sure why Germans are so adamant about paying in cash, but if you don’t want to end up in constant frustration about not being able to pay with your card (I find that most places that do accept card payment only accept German ‘EC’ or ‘Giro’ cards, but no foreign debit and credit cards), have your cash ready.

11 Berlin is a bike city

When people think of bike cities in Europe, they usually think of Amsterdam or Copenhagen, but not of Berlin. However, Berlin is just as much of a bike city as the aforementioned two, with a constant stream of cyclists using the well-marked bike lanes. One morning during rush hour, I found myself in a bike traffic jam and was surrounded by sharply dressed business men on their bikes, women in heels and suits on their way to the office, and moms with two kids on their bike on the way to kindergarten to drop them off. No matter what time of day – there always seemed to be more bikes than cars on the streets. And I have to say: cycling is the best way to get around Berlin, so do yourself a favor and rent a bike for the day at one of the many bike rental places around the city.

Did you know that one fifth of Berlin is covered with trees? And there are 2,500 green spaces and parks in the city, ranging from massive parks like Tiergarten (Berlin’s version of Central Park) and the city forest of Grunewald to small green spaces like Monbijoupark or Helmholtzplatz. There are a number of Volksgärten (people’s parks), and there are plenty of green spaces along the canals and the river Spree that flows through Berlin from east to west. And then there’s Tempelhof, of course, Berlin’s city airport that was, after closing down, turned into a public park, larger than Central Park. 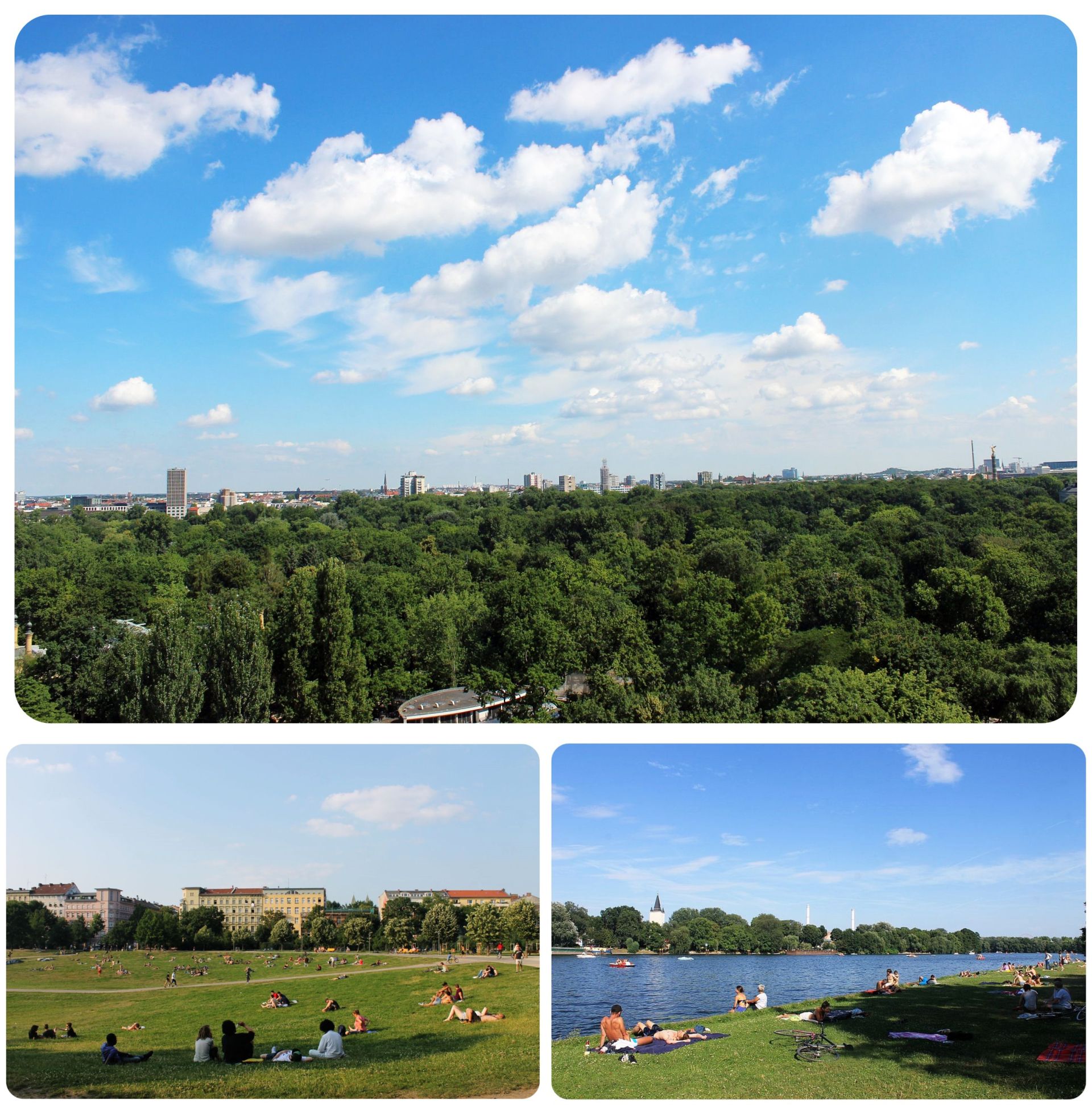 13 Berlin is full of street art

A lot of people are aware that Berlin has a thriving street art scene, but they don’t expect there to be so much street art… everywhere! In most cities, street art is confined to one or a couple of neighborhoods, but in Berlin you can’t walk a few meters without stumbling upon a piece of street art, graffiti or a mural. Even in the most random places, inside staircases for example, you’ll find tags or graffiti. Sometimes I feel like there is not a single door in the city that doesn’t have something painted on it! I personally love it, and I think it adds so much to what makes Berlin such a special place. 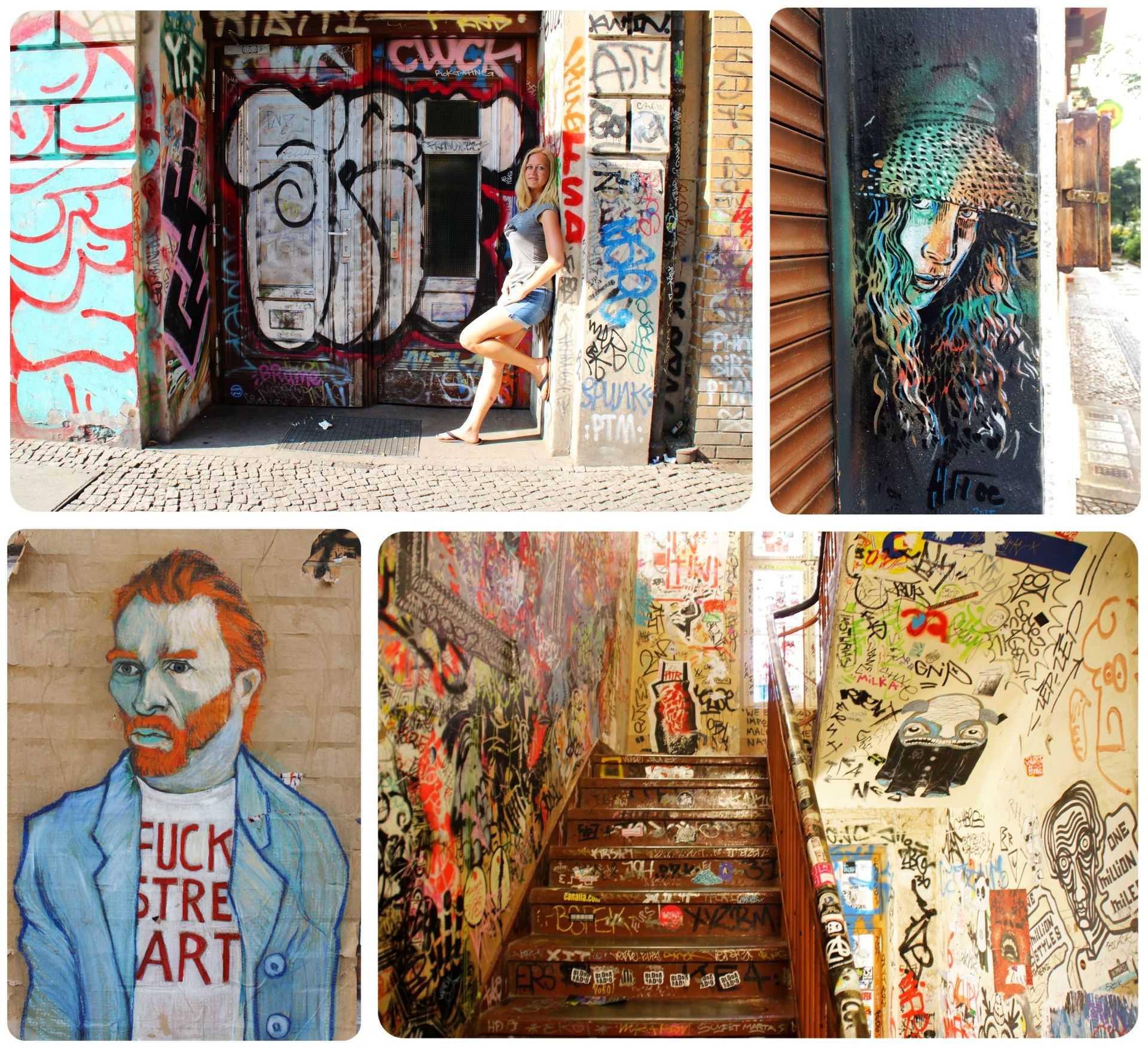 No, the city is not perfect, but that’s what makes me love it even more.

Have you been to Berlin? Was there anything about the city that you didn’t expect / that surprised you? Share in the comments below! 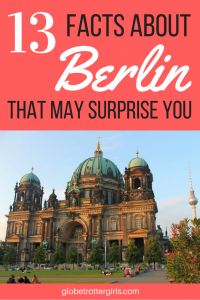 Polaroid of the week: Outdoor cinema in Brooklyn Bridge Park

How to travel luxuriously through India on a small budget