This comprehensive guide includes our personal favorites in Berlin. These are our top choices to soak up the culture and feel of the German capital. In this part of our guide: The best Berlin neighborhoods.

It is by no means final.

One of our favorite cities, we will be back in Berlin again and again and will continue to add to the list. We are not locals (yet) and have not spent enough time in Berlin to explore every single neighborhood in this sprawling, booming city.

Have a look at our other Berlin Quick Guides:

In this part, we are sharing which Berlin neighborhoods you should explore, and what not to miss in each one:

For the two of us, Kreuzberg is the Berlin neighborhood that has the best of everything: an eclectic mix of cultures, more ethnic restaurants than we could ever eat at, gorgeous Wilhelminian-style buildings, green spaces, and an interesting blend of young punks and Turkish immigrants, the latter have made up a large part of Kreuzberg’s population for decades. Oranienstrasse and Bergmannstrasse are both lined with bars, cafes and restaurants, or you can sit by the Landwehr Canal and buy some drinks and snacks from the entrepreneurial Turkish folks who pass by with shopping trolleys filled with cold beer or sandwiches. This self-guided walking tour of East Kreuzberg is actually pretty good and gives you a good feel for the neighborhood. If you go to Kreuzberg, you might want to go on Tuesday or Friday, when the Turkish Market in Maybachufer takes place. Open from 12pm-6pm, this market is full of fruit and vegetable stalls, Turkish snacks, gluten-free deserts, frozen yogurt, coffee stalls, clothes and anything you might or might not need – all at absolute bargain prices.

Not to be missed in Kreuzberg: Berlin Mitte is the actual center of Berlin and where most of the city’s best-known sights are located. You can start with a stroll along Unter den Linden, Berlin’s biggest boulevard, all the way from Museum Island (see below) to the Victory Column in Tiergarten, passing through the Brandenburg Gate. Stop at the Reichstag, the Memorial of the Murdered Jews of Europe, Bellevue Palace, Gendarmenmarkt and Hackesche Höfe, venture down Friedrichsstrasse to Checkpoint Charlie or from Hackescher Markt to Alexanderplatz and the TV Tower. Potsdamer Platz, in walking distance from Brandenburg Gate, is known for its striking modern architecture and is home to several restaurants, bars, cafes, cinemas and shopping malls. Not to be missed in Mitte: Prenzlauer Berg, or Prenzlberg for short, is probably the most bohemian Berlin neighborhood, filled with little boutiques, sidewalk cafes and restaurants, and squares where young moms push their strollers to meet for morning chats. The starving artists and alternative thinkers that once populated the neighborhood have grown up, and Prenzlberg has grown up with it, becoming a chic neighborhood with high rent, young professionals, twice-weekly farmers markets, organic ice cream shops and independent boutiques. After undergoing a significant amount of renovation in the last decade, Prenzlberg is one of the most beautiful neighborhoods in the city, with tree-lined streets and outdoor cafes perfect for people watching. Not to be missed in Prenzlauer Berg: Friedrichshain is technically part of Kreuzberg, but big enough that it deserves a mention in its own right. While Kreuzberg is south of the Spree, the Friedrichshain part of the borough is located north of the river and borders with Mitte and Prenzlauer Berg in the west. Friedrichshain is one of Berlin’s most lively areas, with a buzzing nightlife scene, lots of cafes and restaurants, street art and some great riverside bars. Not to be missed in Friedrichshain: Neukölln, a socially problematic Berlin neighborhood only a few years ago, is now an up-and-coming alternative to Kreuzberg. A similar melting pot of cultures, the neighborhood has seen a huge upswing over the last few years, with art galleries, creative businesses, cafes and bars popping up everywhere. The most interesting area is the Reuter Quarter, the area around Reuterstraße where most of the new businesses and boutiques set up and attract hipsters and artists alike. The historical center of Neukölln is Rixdorf (between Karl-Marx-Straße and Sonnenallee) with Richardplatz being its heart, a surprisingly bohemian part of Neukölln which still has many buildings from the mid-19th century. Old churches, small shops and courtyard off winding roads give this part of the neighborhood a village feel.

Not to be missed in Neukölln: Have Berlin neighborhoods to add?

As you can see, we have only started to explore Berlin’s best neighborhoods and will update this guide every time we return to Berlin – if you have any suggestions for neighborhoods we should check out or things you think people shouldn’t miss in the neighborhoods above, please share them in the comments below! 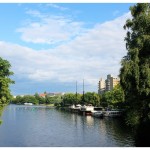 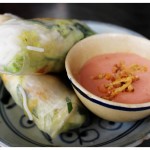 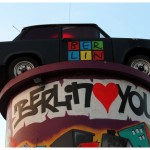 Why Berlin Is the Place to be on a Budget
Click here to cancel reply.

Polaroid of the week: Those sweet Berlin summer days... | GlobetrotterGirls

[…] shops (there are just too many in this city.. but I guess that’s a good problem to have), neighborhood walks and showing a visitor around town. Plus: Meet-ups with new friends, catch-ups with old friends, and […]

My boyfriend and I are traveling to Berlin in September. This was an amazing help to start planning!! thanks so much!

Thanks so much, Jenn :) I will JUST miss you :D

Great article, very well done. I totally agree with your selection by the way. My most favourite would be Friedrichshain if I had to decide...

I guess you would love the abandoned eisfabrik by the way!

Job - A quick Google search revealed that the abandoned Eisfabrik would be right up our alley, indeed! I read about these photo tours you can take in Berlin where you get to explore abandoned buildings & factories with your camera - I'd love to go on one of these one day!