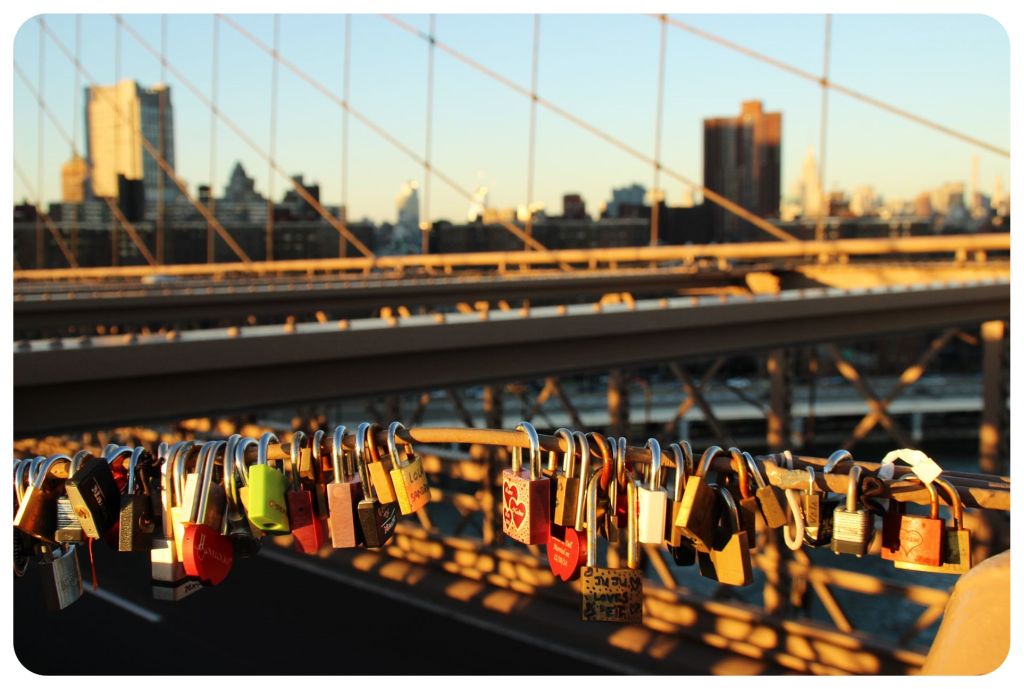 On our first ever visit to the Brooklyn Bridge in 2009, there were no locks hanging off every hook and in every nook along the bridge like there are today. 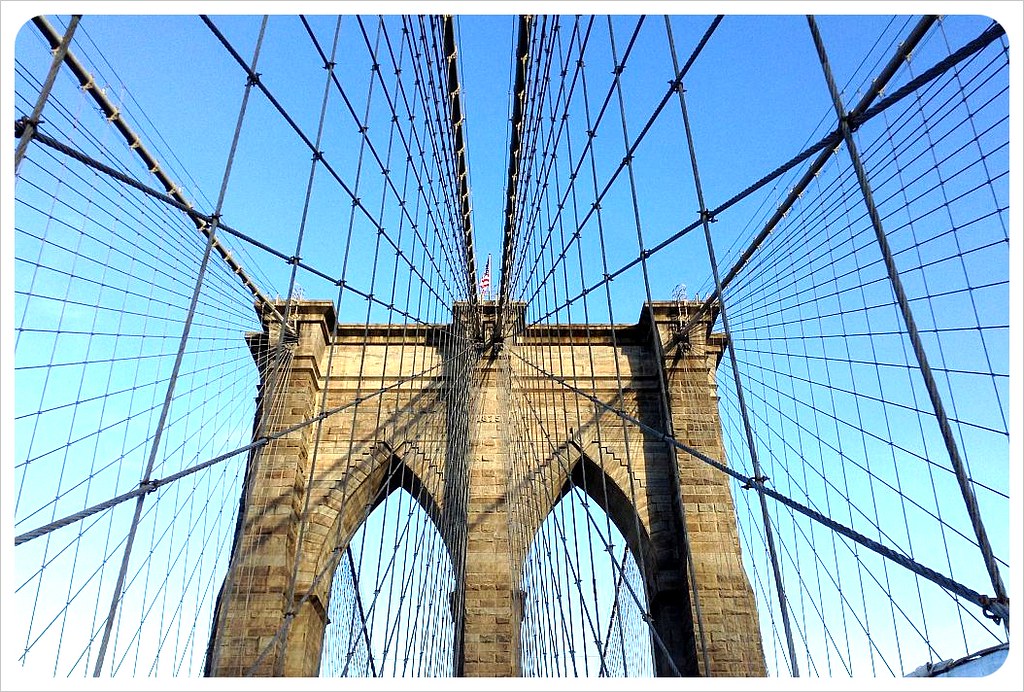 This isn’t because it was illegal to lock your love up on the bridge then and that it is legal now. In fact, the rules haven’t caught up to the trend here in New York or around the world. Over the past few years love locks have been popping up on bridges and fences in major cities everywhere. We most recently wrote about an entire fountain covered in love locks we spotted in Montevideo, Uruguay.

But New York is a city that has our hearts, which meant it was most fitting for us to lock our love up right here, on the Brooklyn Bridge. 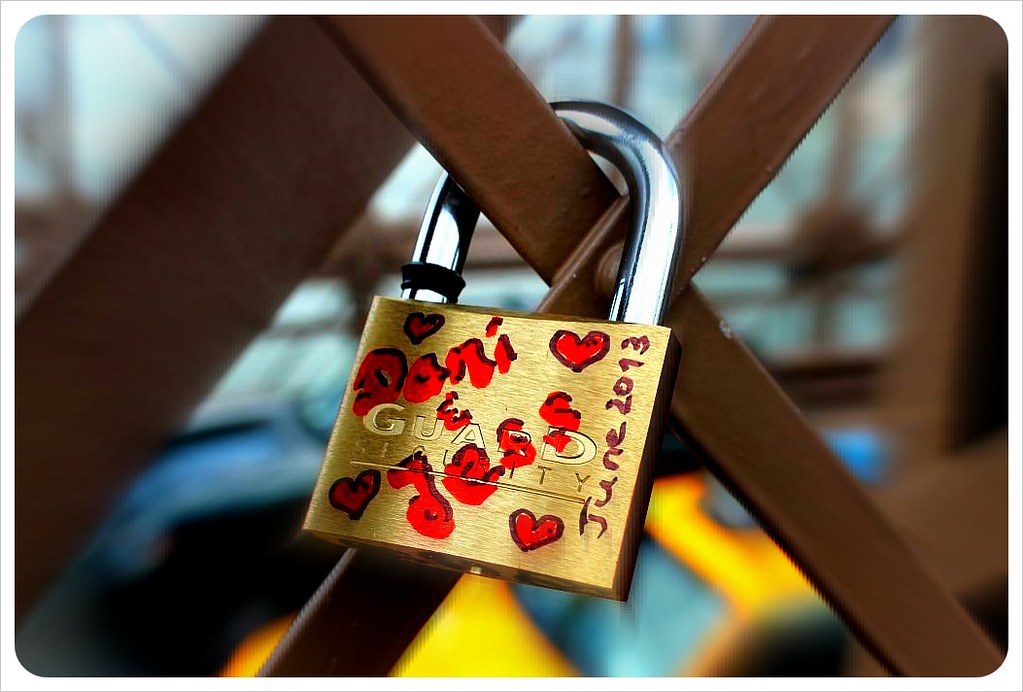 The trend seems to have taken off first in Italy after the release of the 2004 movie, Tre Metri Sopra il Cielo, based on a 1992 novel by Federico Moccia. The film included a scene where a couple ‘locked’ their love forever by locking a padlock on a bridge and tossing the keys into the river below to symbolize their eternal love. This took place on the Ponte Milvio bridge in Rome, which then immediately became a popular meeting point for couples making their own eternal declarations of love. 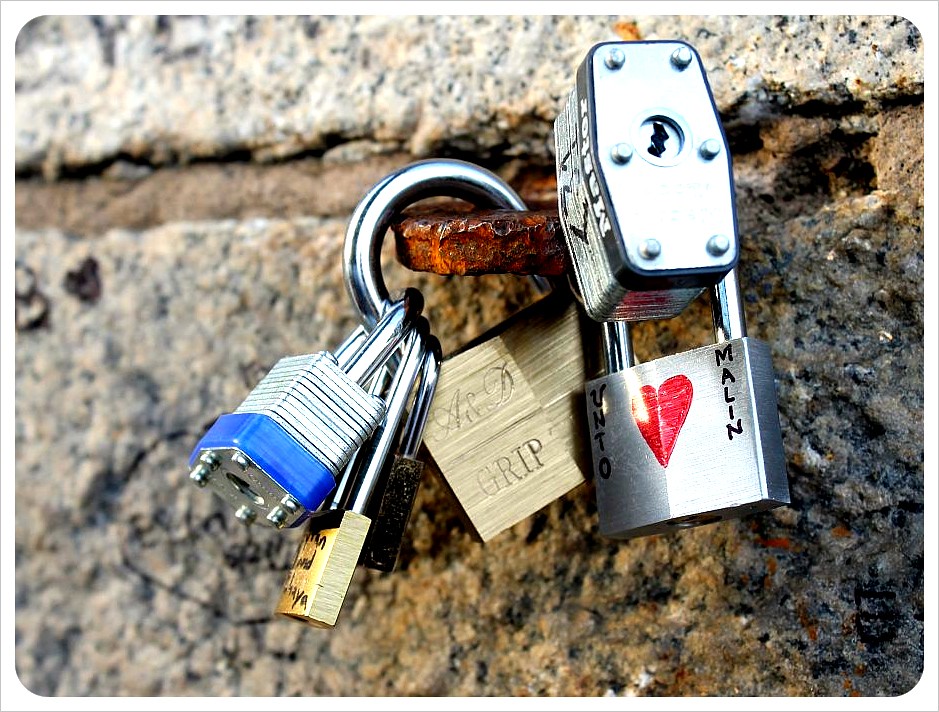 Not long after, love locks started to appear in other places from Korea to China to Australia, Germany or Serbia. We came across them for the first time when we hiked in Cinque Terre in northern Italy, where ‘The Path Of Love’ is covered in love padlocks from couples from all around the globe. Interestingly, Wikipedia has an entry listing all of the world’s popular love lock spots. 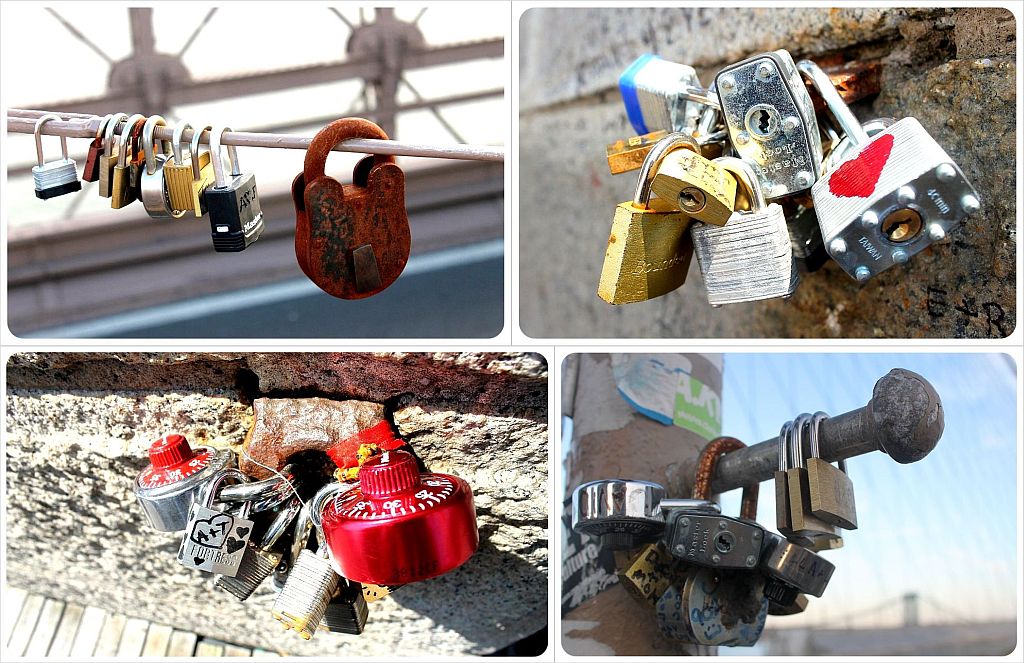 In Paris, the city of romance, the Pont des Arts bridge has evolved into a popular destination for proposals, engagement photo shoots and newly-weds, with the couples adding a love lock to the bridge on their special day. 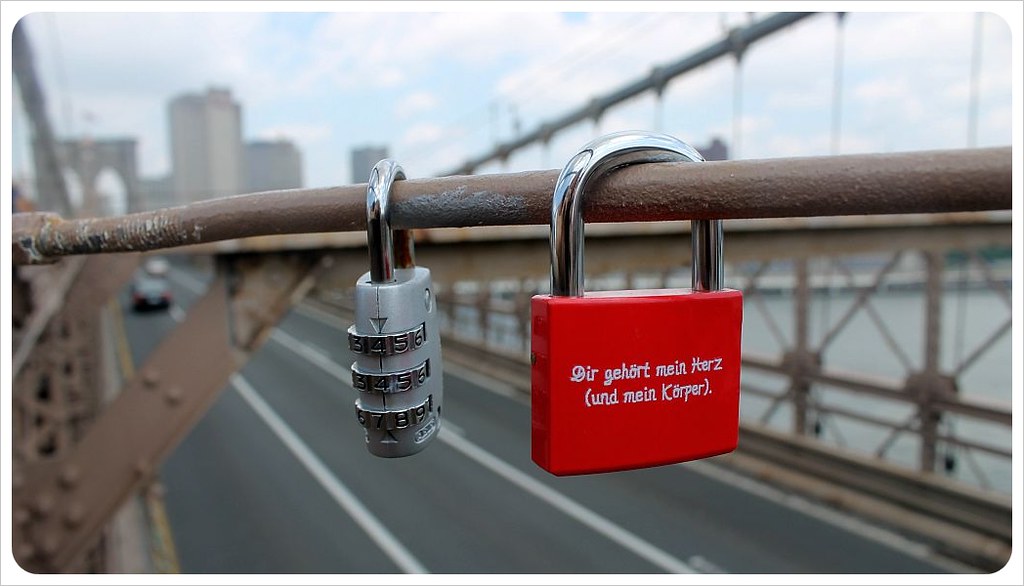 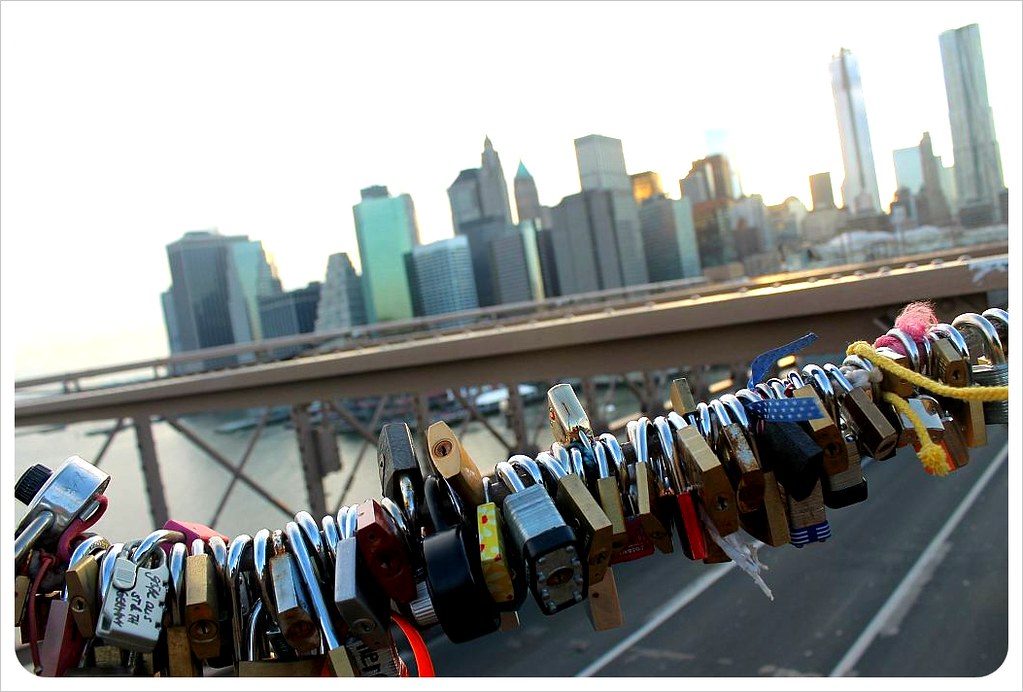 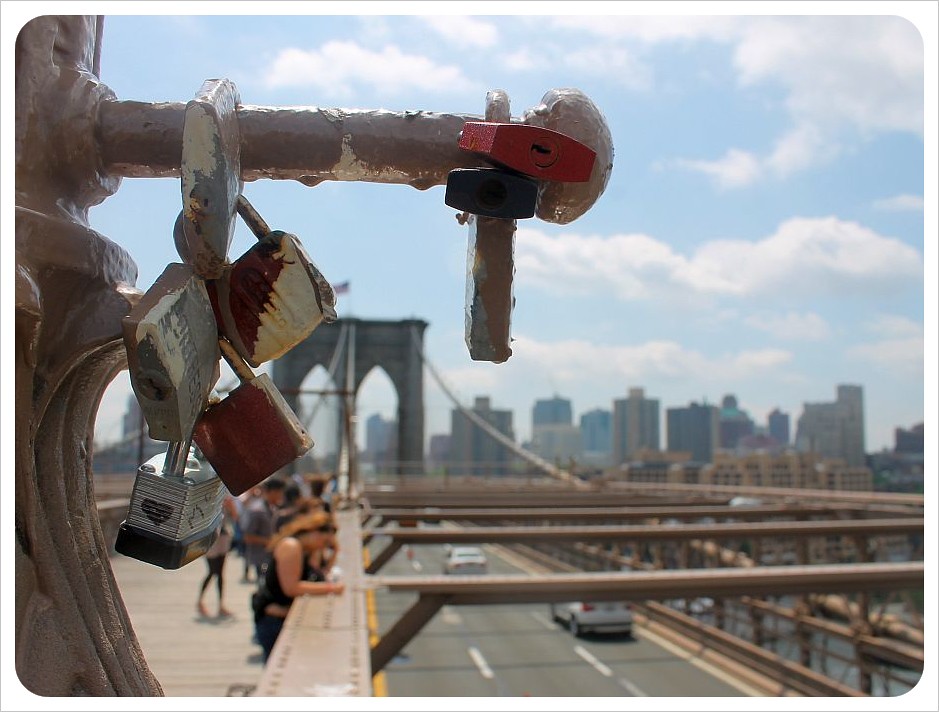 Although New York might not hark of the romance of Paris, the phenomenon has most definitely spread and couples are marking their engagements, wedding and declarations of eternal love by locking their own padlocks to this famous landmark. 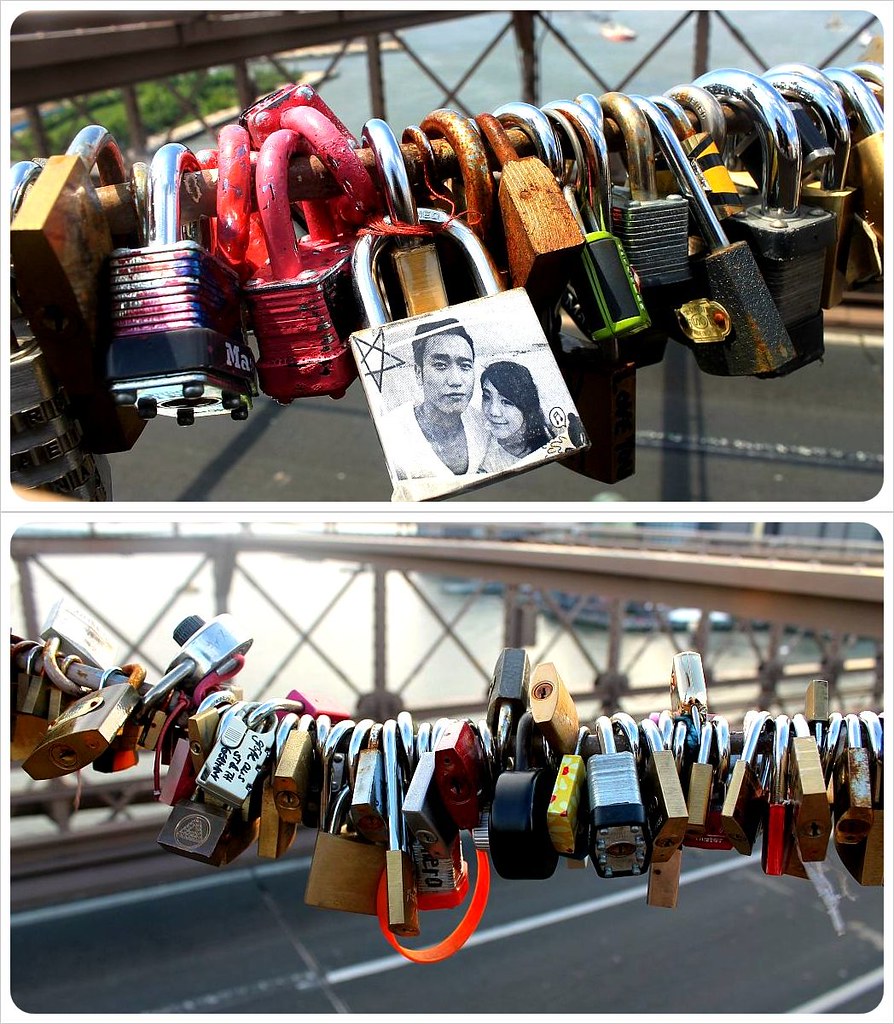 The locks themselves range from ordinary padlocks to colorful ones with engraved dates and names. 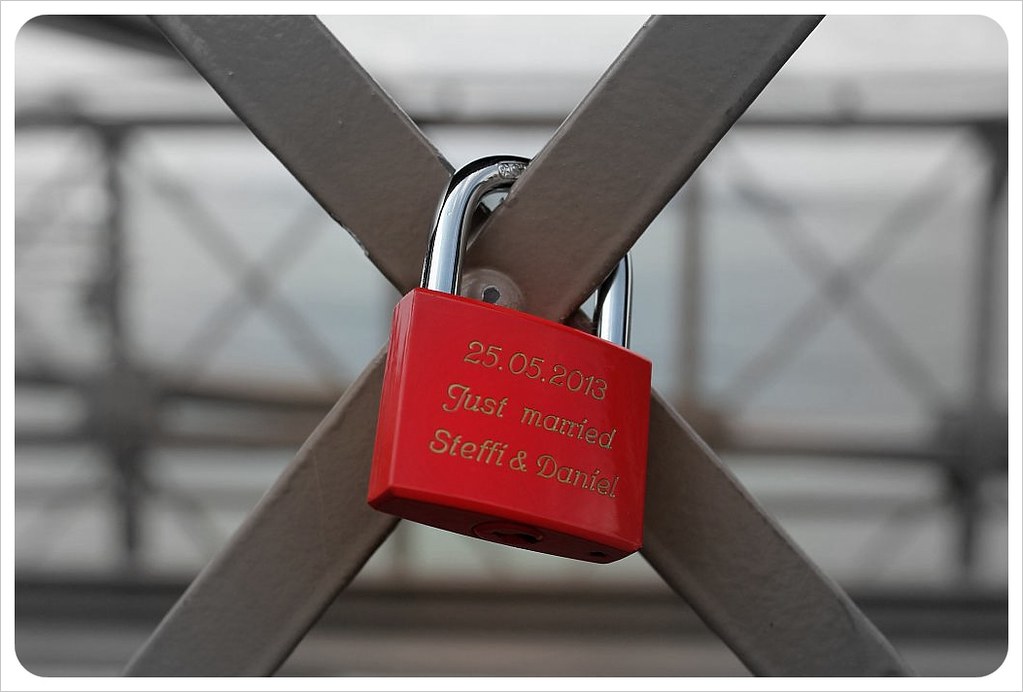 So far, the padlocks on the Brooklyn Bridge haven’t reached an extreme like on Cologne’s Hohenzollern Bridge, which holds over 40,000 (!) love locks. But there are at least a few hundred now. 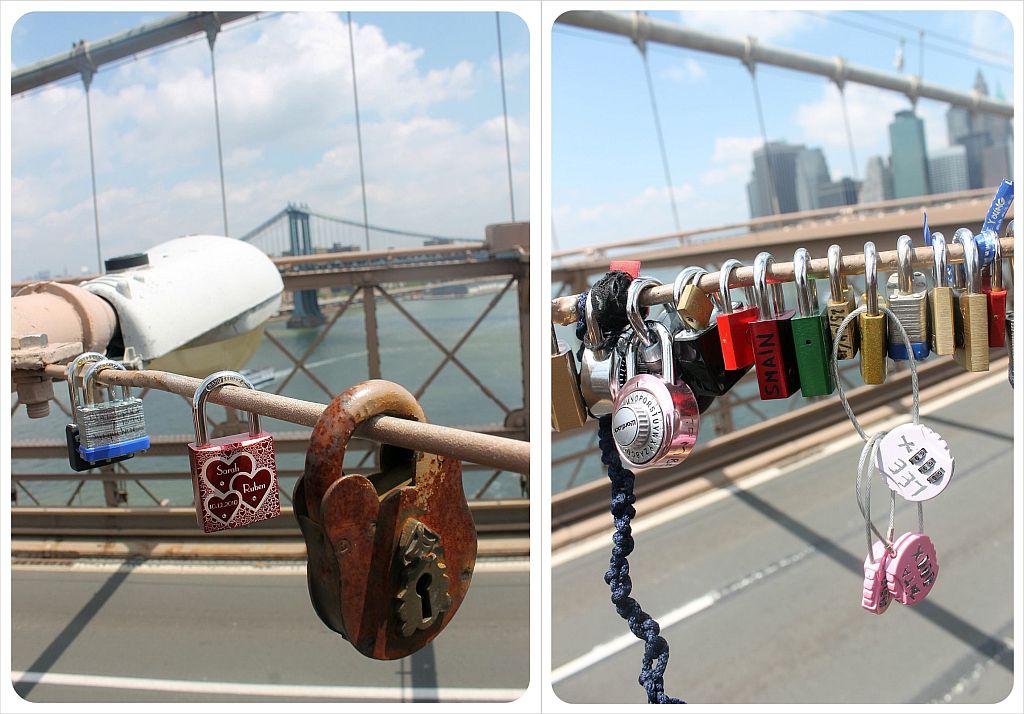 While this love lock gesture is utterly romantic, it’s not quite legal. Supposedly there is a sign on each end of the sidewalk over the bridge that says “Attachment of any sorts to this bridge structure shall not be allowed.” 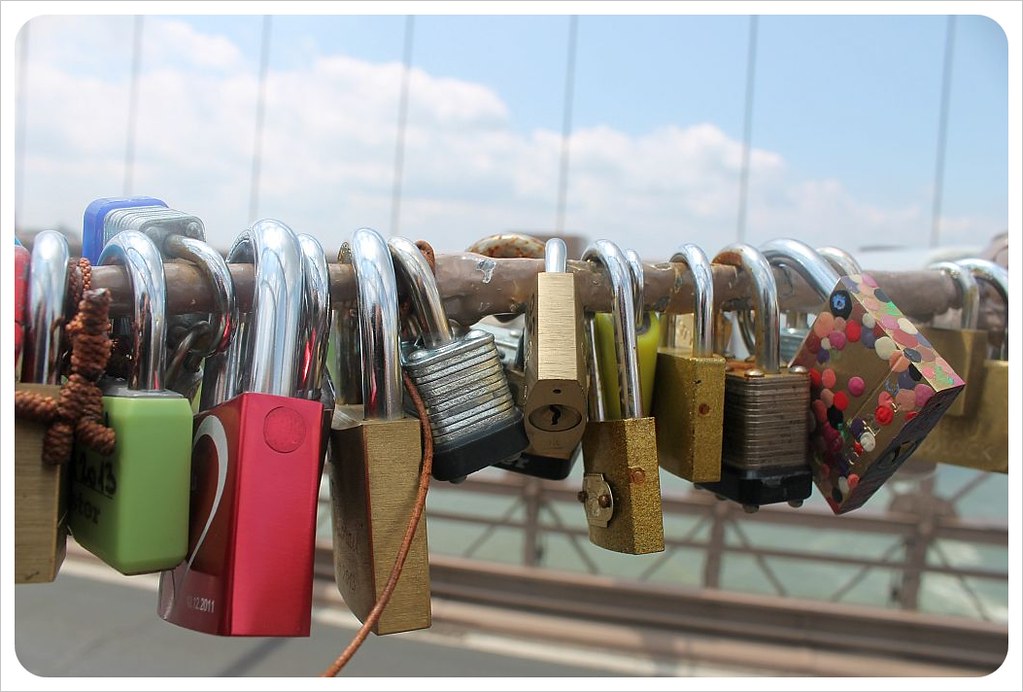 We have crossed over this bridge several times now and neither of us have seen the sign – otherwise we might not have added our very own padlock to the collection. While it seems as if the authorities turn a blind eye to the locks on the pillars, benches and railing, the many locks that are added to the street lights are removed regularly, to ensure the safety of the drivers who pass below the lamps. You can see how this lamp poll was pulled down by the weight of love… 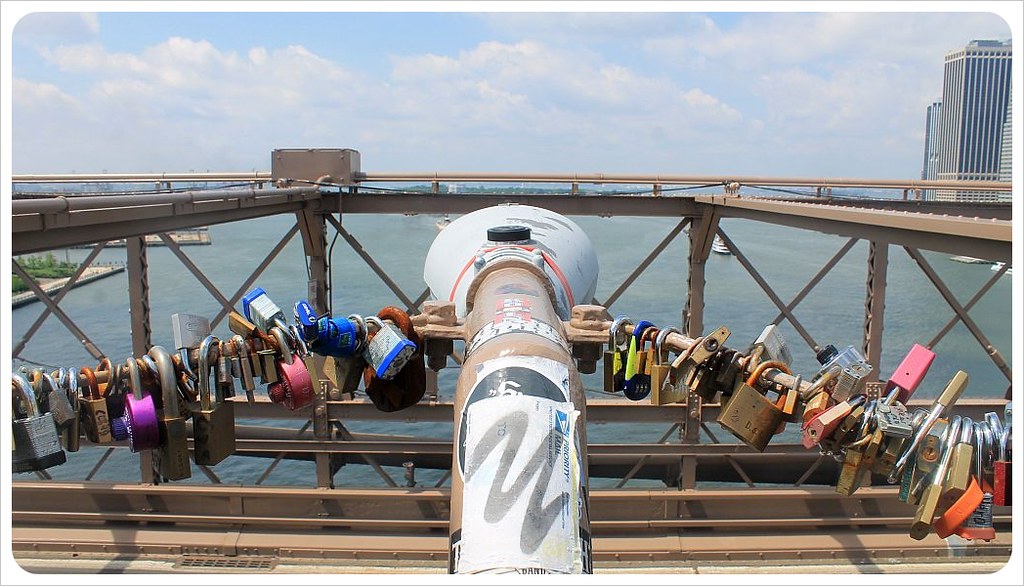 A lamp pole being overloaded with love locks has happened before – at the most famous of the love lock bridges, the Ponto Milvio in Rome. The lamp post that was covered in locks partially collapsed in 2007, which resulted in the removal of the locks and the introduction of a €50 fine for anyone trying to add a padlock to the bridge. 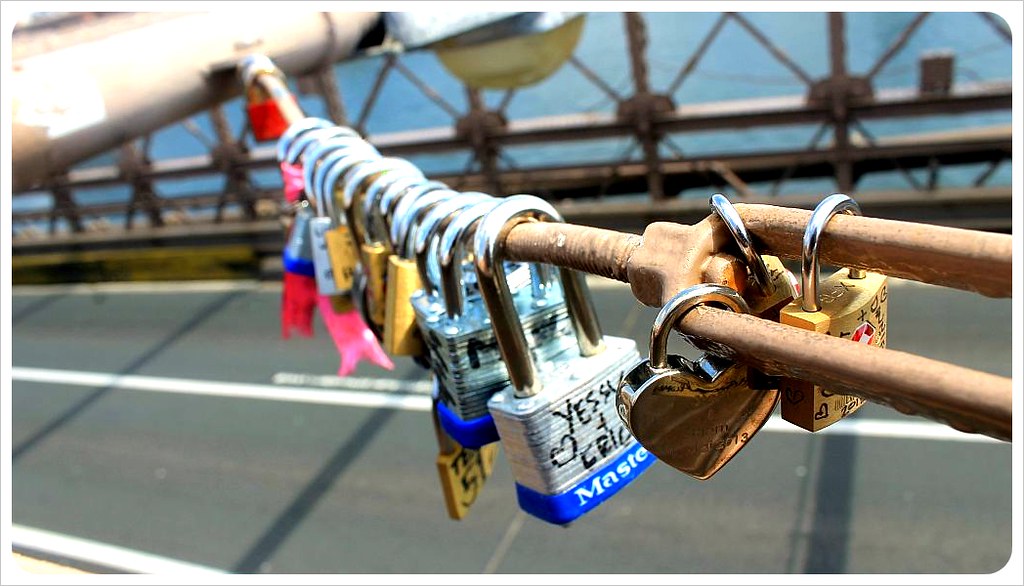 While there might be some naysayers who feel that the locks disrupt the natural look of the bridge, the two of us, romantics that we are, think that it is a beautiful gesture for lovers to promise everlasting love to each other in such a simple, yet public way. 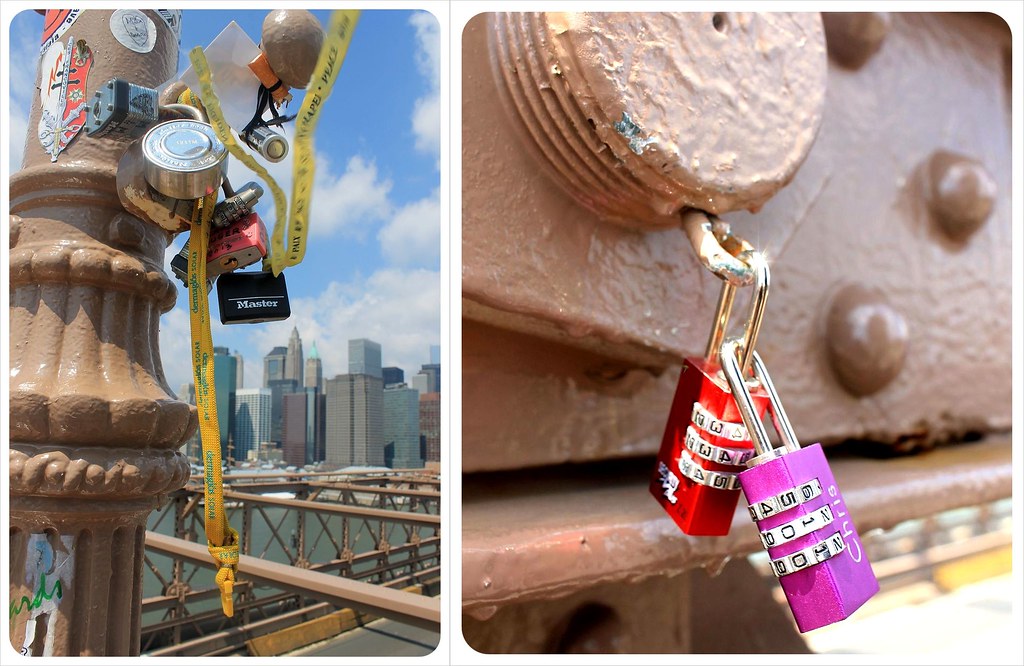 Symbolic gestures of love seem to appear less and less today with people acknowledging anniversaries in status updates on Facebook and e-cards replacing thoughtful love letters. That’s why we personalized our own padlock with Dani & Jess on the front and our nicknames on the back, locked it on the Brooklyn Bridge and threw the keys into the water below.

How do you feel about love locks – do you think they are cheesy or a meaningful way to seal your love?