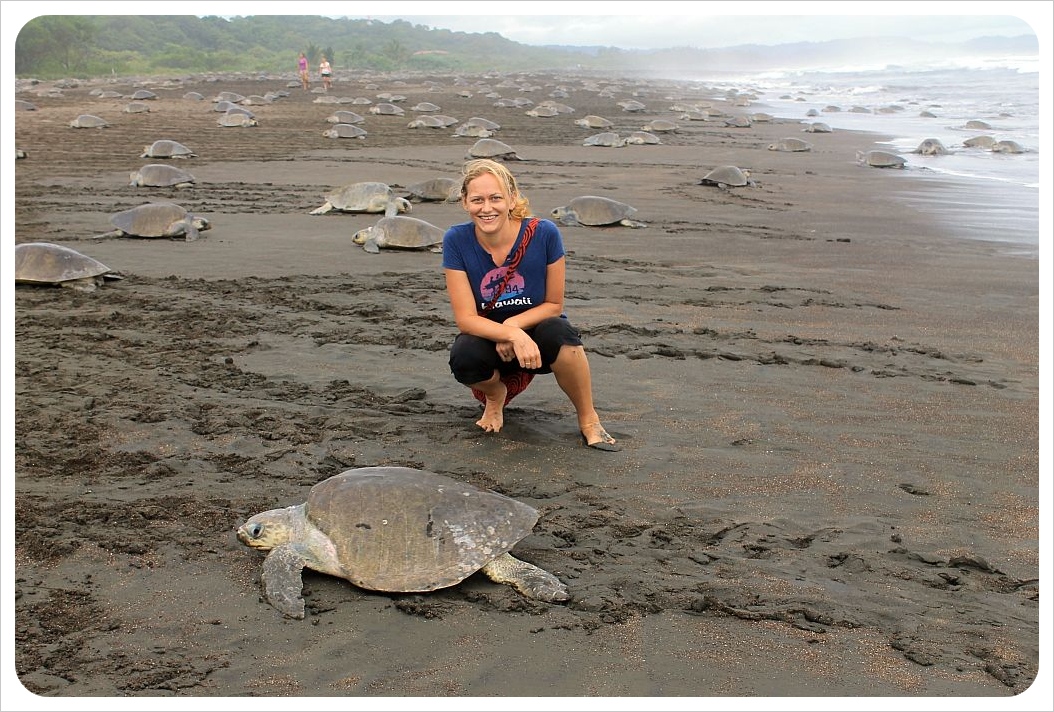 ‘Haven’t you heard about the turtle arribada in Ostional?’ Christina asked us when we remarked how badly we would love to see some sea turtles. We heard it might be possible in Costa Rica, we tell her. 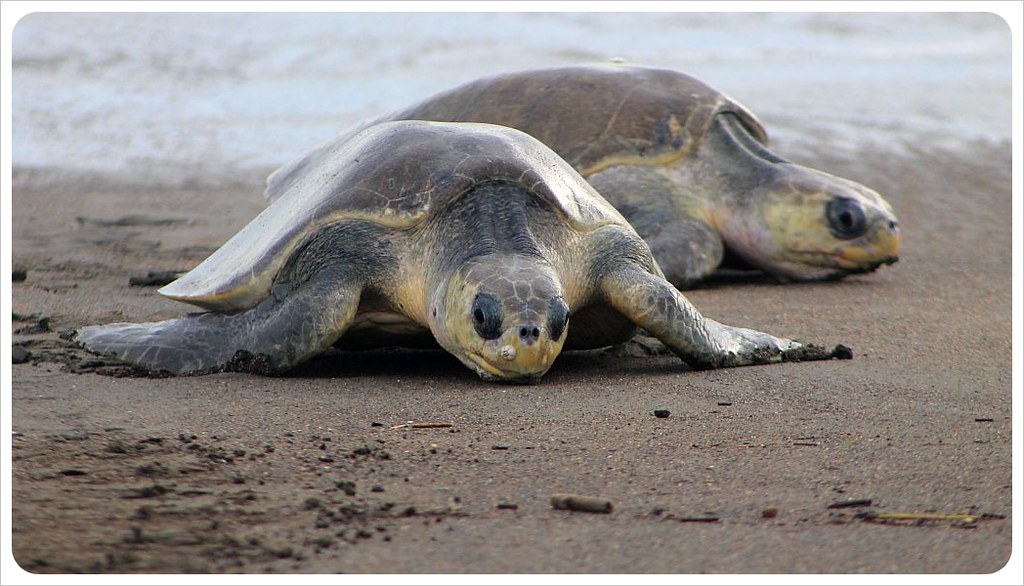 “Hundreds of thousands of turtles will come to lay their eggs on the beach, just a few miles up the road from here”, she explained. Four times a year, ten days before the new moon from August to November, masses of olive ridley sea turtles simultaneously swim out of the sea and lay millions of turtle eggs on the beach.

We couldn’t believe our luck. Of all our time snorkeling in the Caribbean, we have only seen one sea turtle. In just a matter of days, we would be seeing more in one place than most people could ever see in a lifetime during the arribada, a Spanish word roughly meaning ‘arrival into port or harbor’. 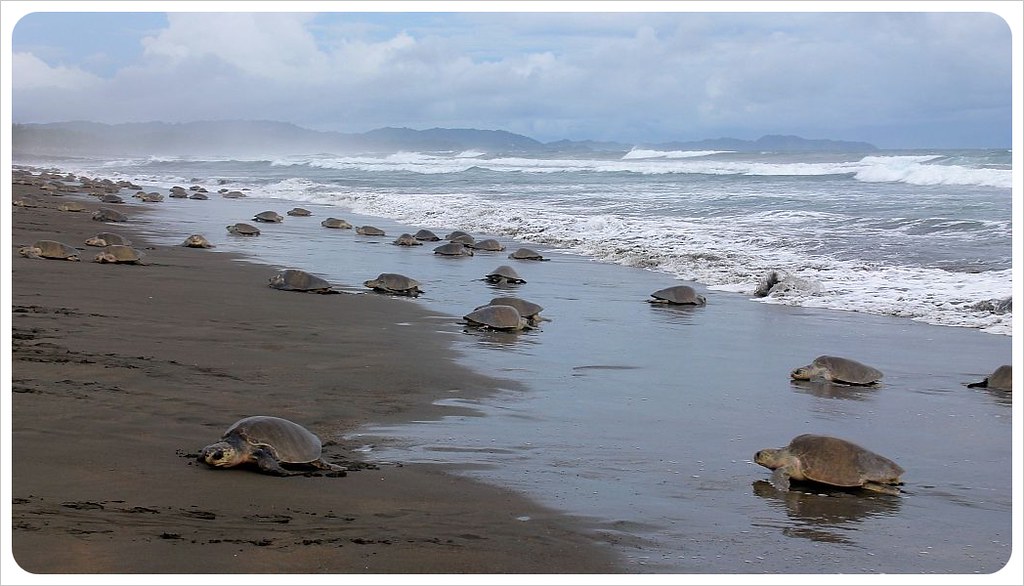 The turtles’ arrival is not an exact science, so all we could do was wait it out. We checked Facebook updates from local turtle guides daily and finally a few days later, the start of an arribada was confirmed – for the very day that Jess was set to leave for a quick visit back home to Chicago. This was going to be one amazing experience the two of us would unfortunately not be sharing. 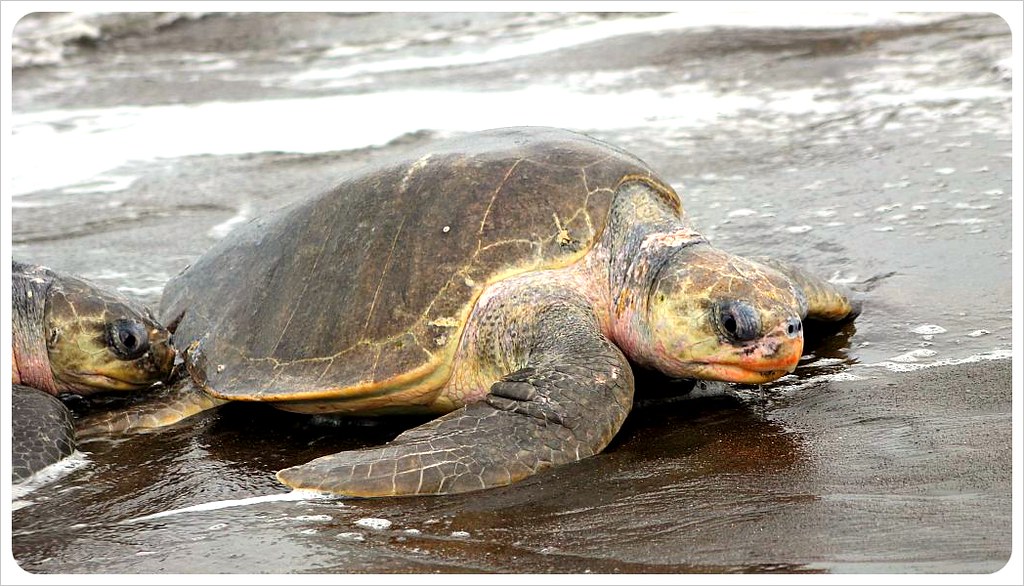 When our friend Denise called to say we would head to nearby Ostional beach, I was dressed and ready in five minutes and could barely contain my excitement. The arribada takes place in only a few places in the world, and Ostional beach is the second biggest nesting ground behind India. Any other time of the year, this beach isn’t really all that interesting, but when there’s a turtle arribada in Ostional, the sleepy village sees an influx of visitors. 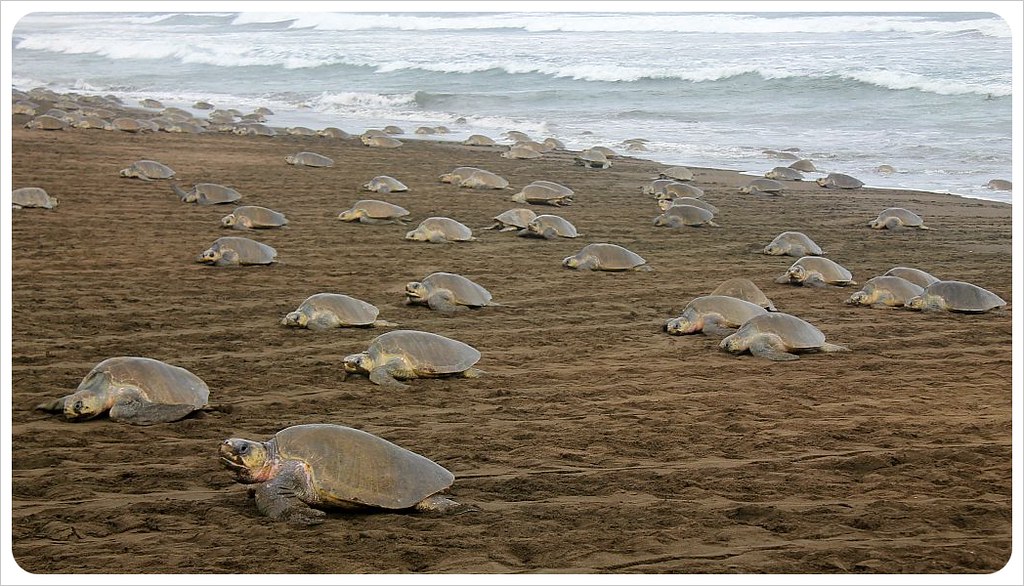 We parked the car a mile outside of the village and walked to the black sand beach, where I immediately spotted a lone turtle awkwardly digging her nest with her back flippers. I almost tiptoed over, awestruck at being able to witness this rare moment. 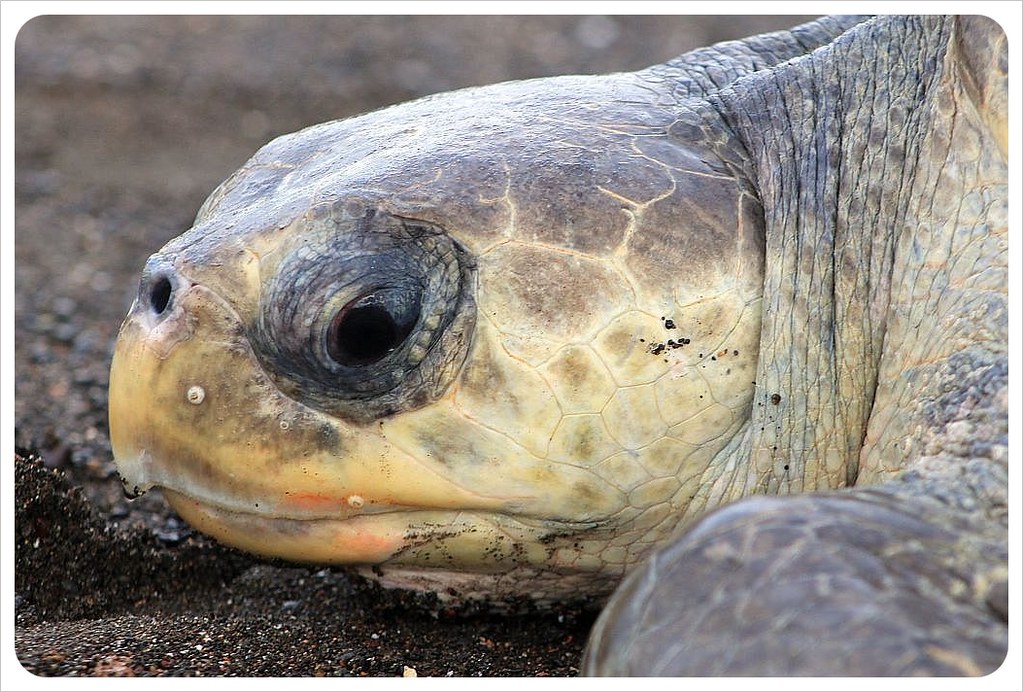 At first the mothers-to-be arrive in ones and twos, slowly lugging their 40 – 50 kilo (90 to 100 pound) shells up the sandy banks to safe spots to dig their nests. They are not bothered by the onlookers who gather to watch the spectacle. Instead, their one-track minds focus only on digging holes roughly two feet deep. Within thirty minutes the turtles dig their nest and lay 80-100 white, round soft-shell eggs that are the exact size and shape of a ping-pong ball, then hastily fill in the hole and make a beeline back into the ocean. 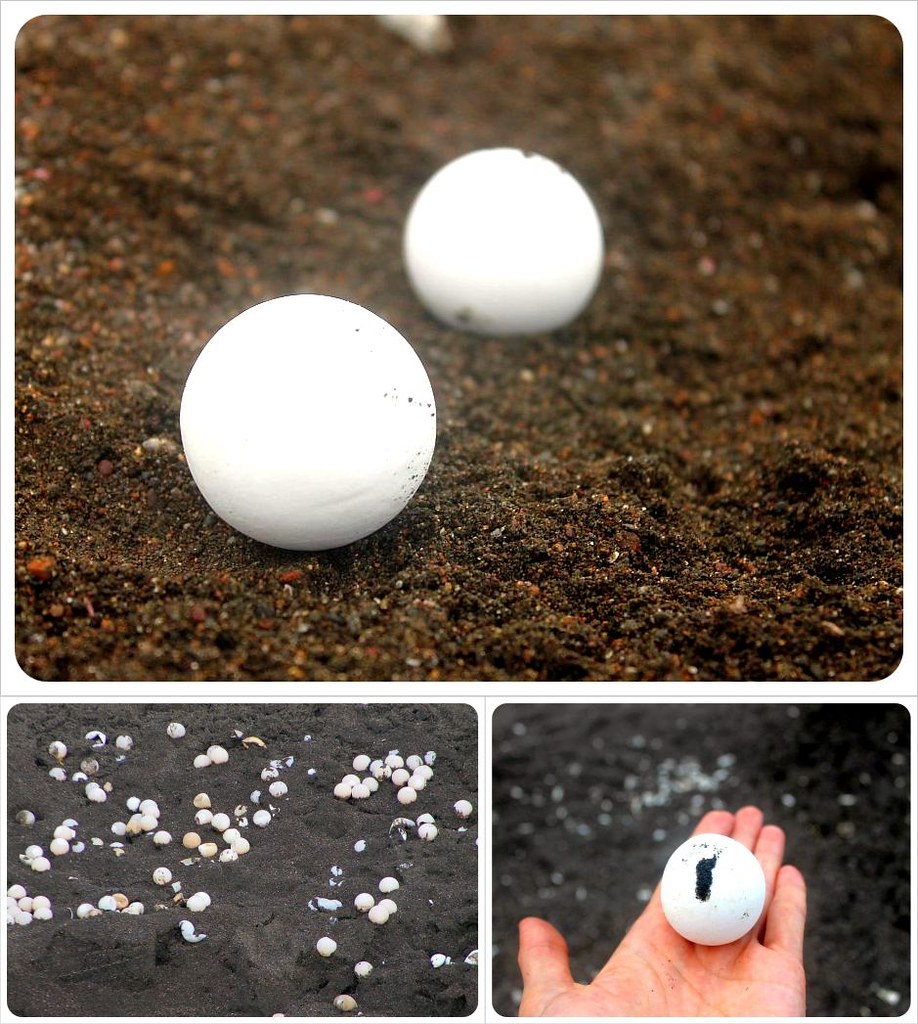 From the moment their backs are turned, the little turtle eggs are in grave danger. Hundreds of vultures hover and circle the nests as she plants the eggs and dive in and pluck out a few eggs the minute she leaves. Then the stray dogs arrive, digging out much of what the scavenger birds leave behind, until being shooed away by the people of the village, who are permitted to collect and sell the eggs on the first two days of the arribada. Despite the fact that olive ridley turtles are an endangered species, the locals are still allowed to collect the turtle eggs and earn well, up to $200,000 from the four arribadas. 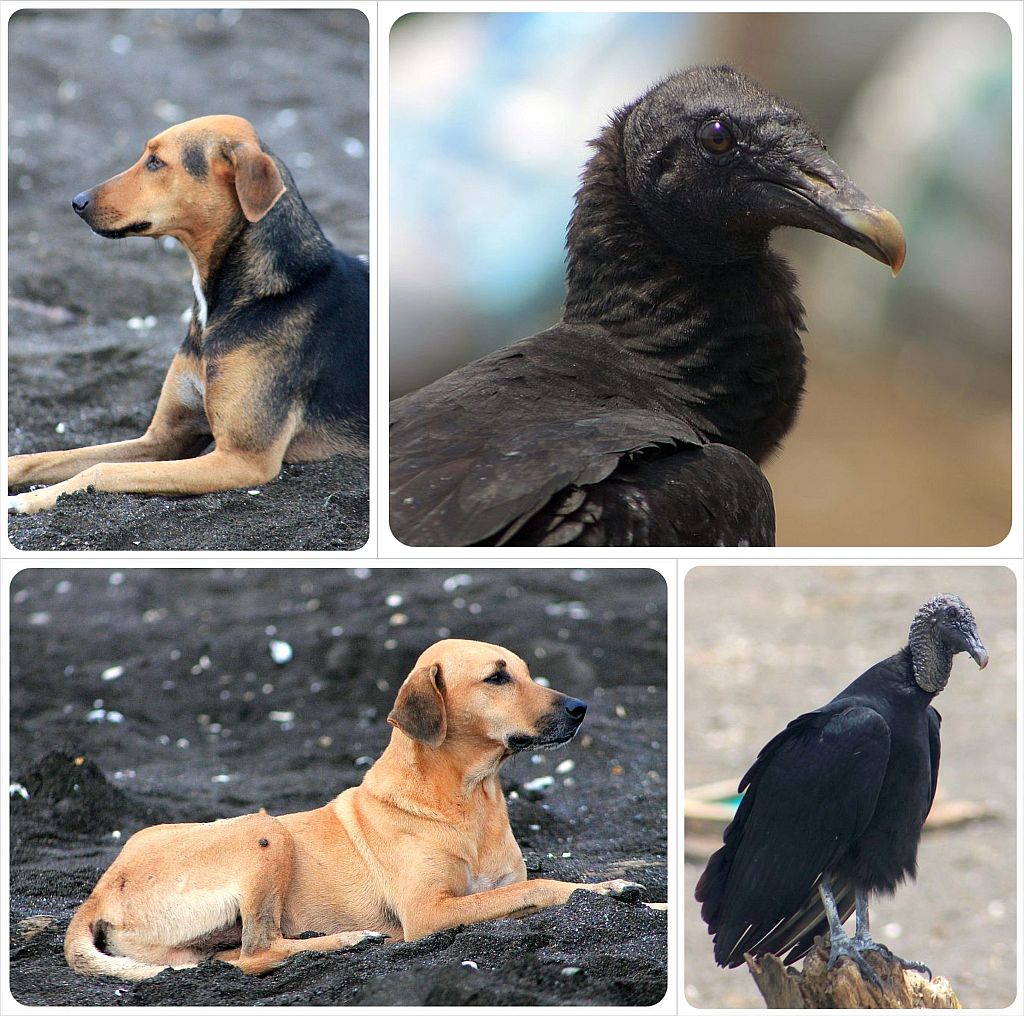 In addition to everything stacked against them, the turtles themselves are their own enemy. As thousands flap and flail around the beach at once, I saw countless turtles digging their nest right on top of where others had already laid their eggs, flipping out dozens of the others in the process. 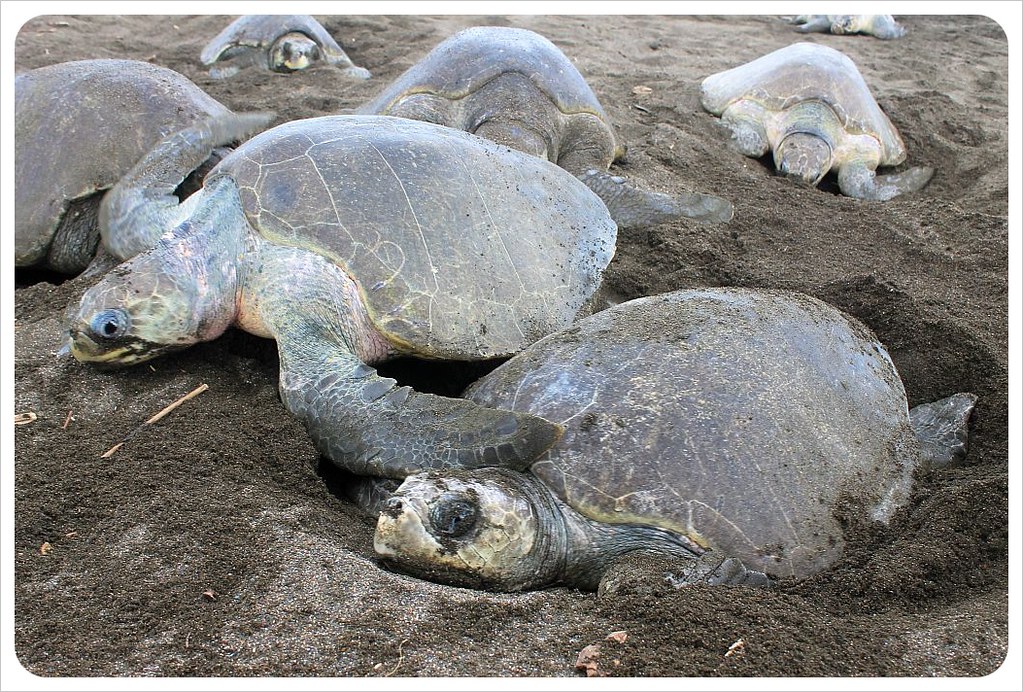 Even though 10 million or more eggs are laid on the beach each time, after the vultures, the dogs, the humans and themselves, only a fraction of the baby turtles will make it into the water for the first time. 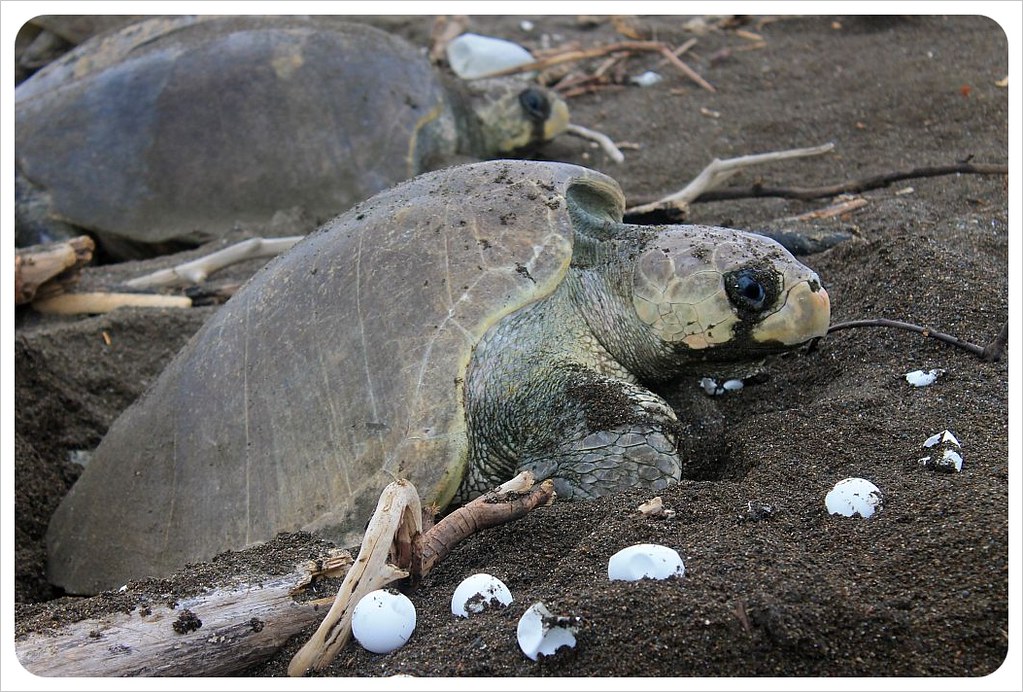 When they hatch 45-50 days after an arribada, only one in fifty of the tiny turtles will reach the water. Less than half the size of an adult human hand, the babies are easy prey for vultures and dogs as they wiggle their little white bodies into the sea, where even more predators lay in wait. 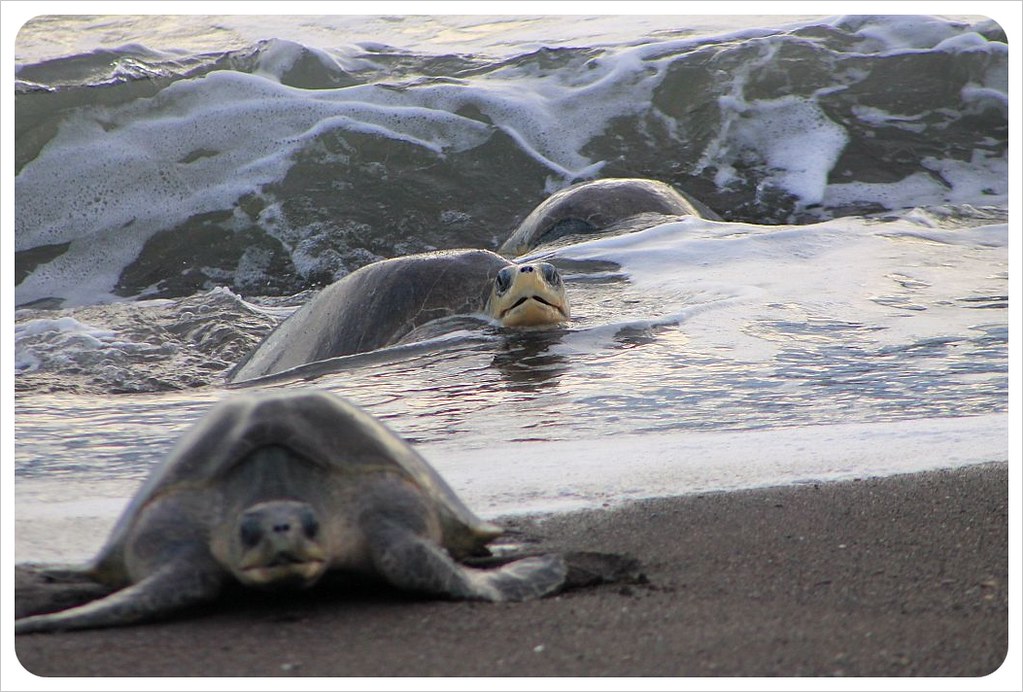 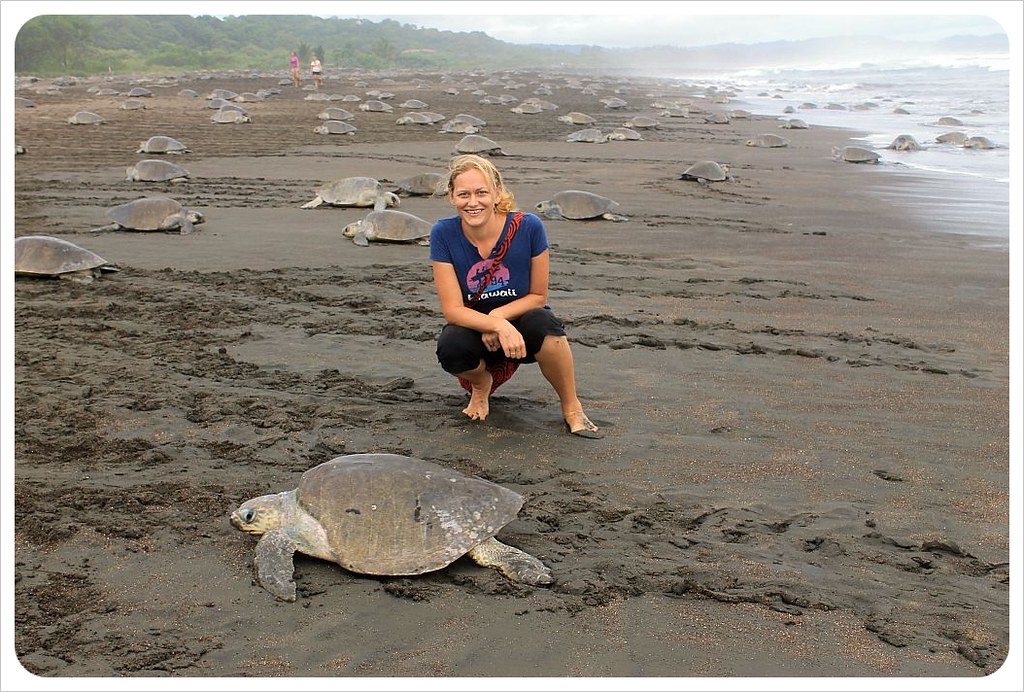 As we walk along the beach, more and more turtles emerge from the waves. When we arrived around 3.30pm, there were only a few turtles out; an hour later, the beach appears to be made of boulders, so full it has become with turtle shells inching up and back down the beach. 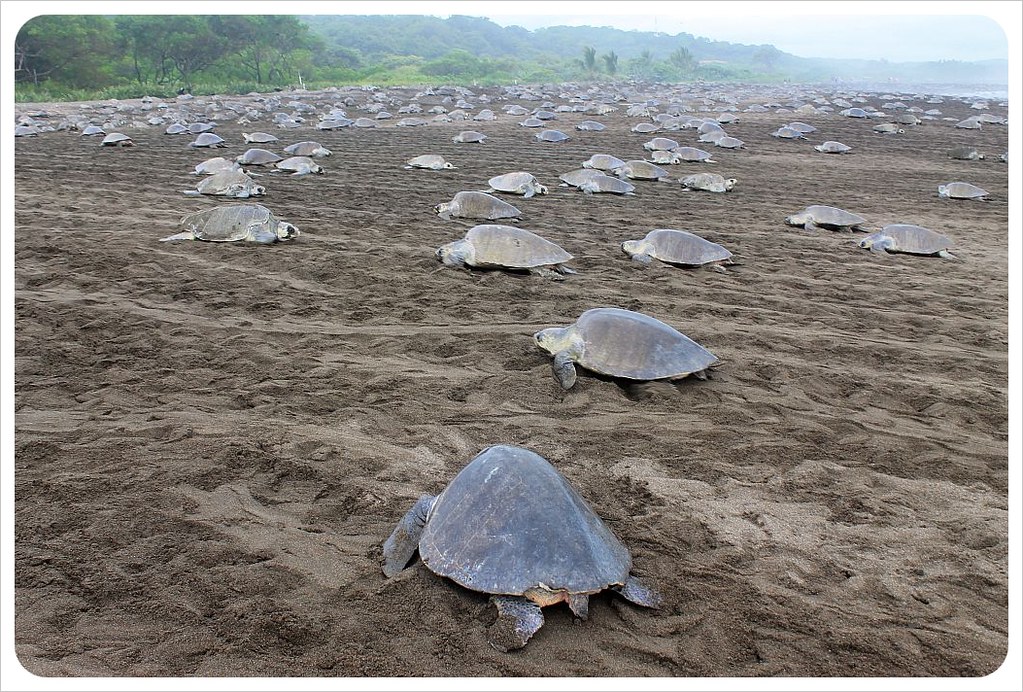 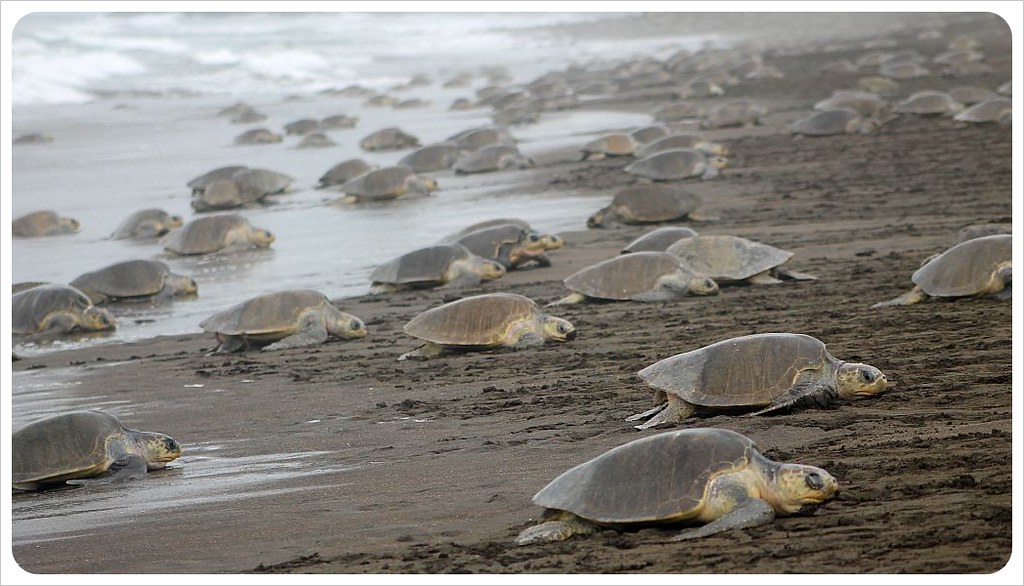 By sunset there are thousands of turtles and it is entirely chaotic, with turtles trampling over each other fighting for the few patches of sand left to make their own nest. I sit down in the middle of a group of turtles, mesmerized by how they dig deeper and deeper into the sand. Their flipper covers me with scoops of sand until the depth of the hole satisfies them. By this time, the turtles are worn out, but rather than rest, eggs drop out from their insides into the hole, one by one. 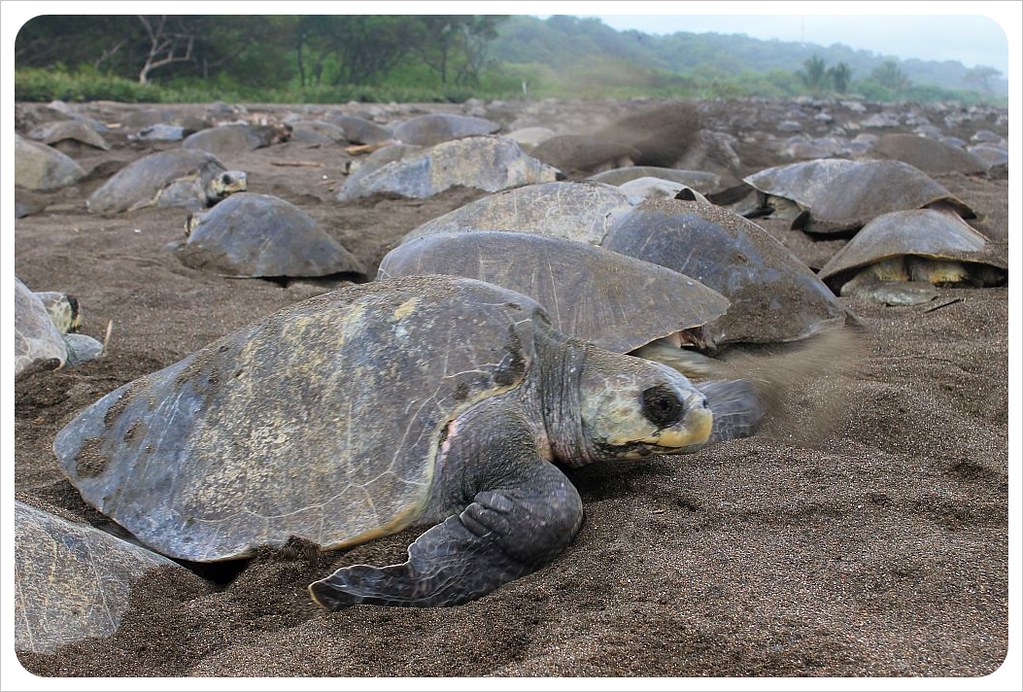 As soon as the sun sets, we leave the beach already planning our visit the next day. This experience is addictive; I can’t wait to see it again. We find out later that this particular arribada might have been the biggest ever in Ostional. It is the rainy season, however, and on the second day it pours down all day, making rivers uncrossable and standing exposed to whipping winds on the shore unbearable. By day three we are able to go again, the rain stopping just in time for an afternoon visit to Ostional. 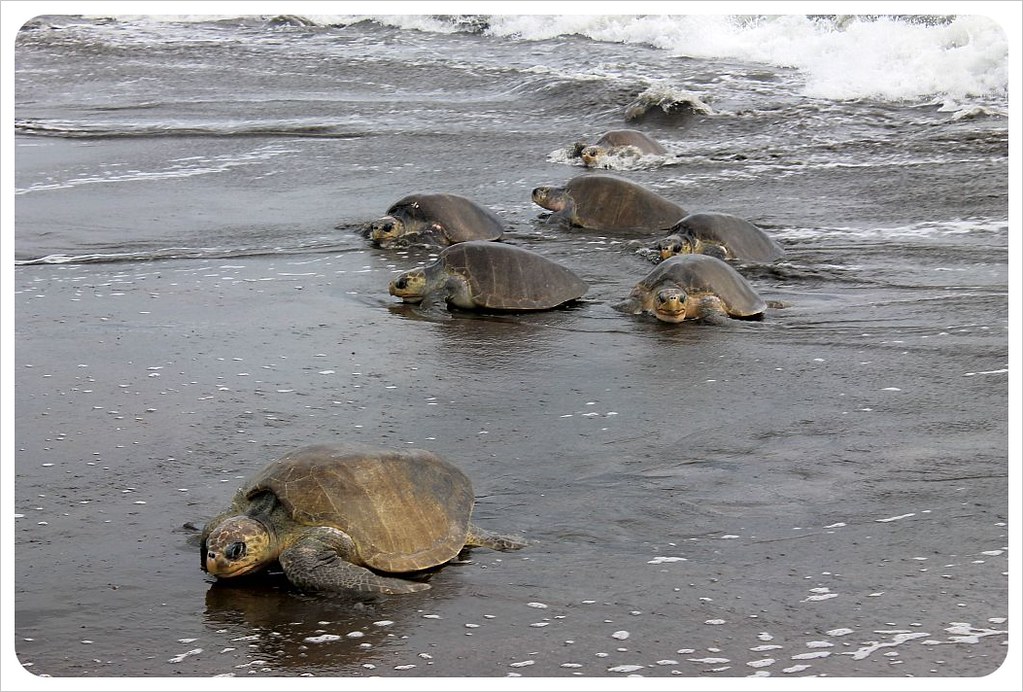 Denise prepares me, as we are set to see the slow, sick, injured and old turtles that arrive today. I see turtles with three legs, scars and pieces torn out of shells from shark bites, deformed turtles. 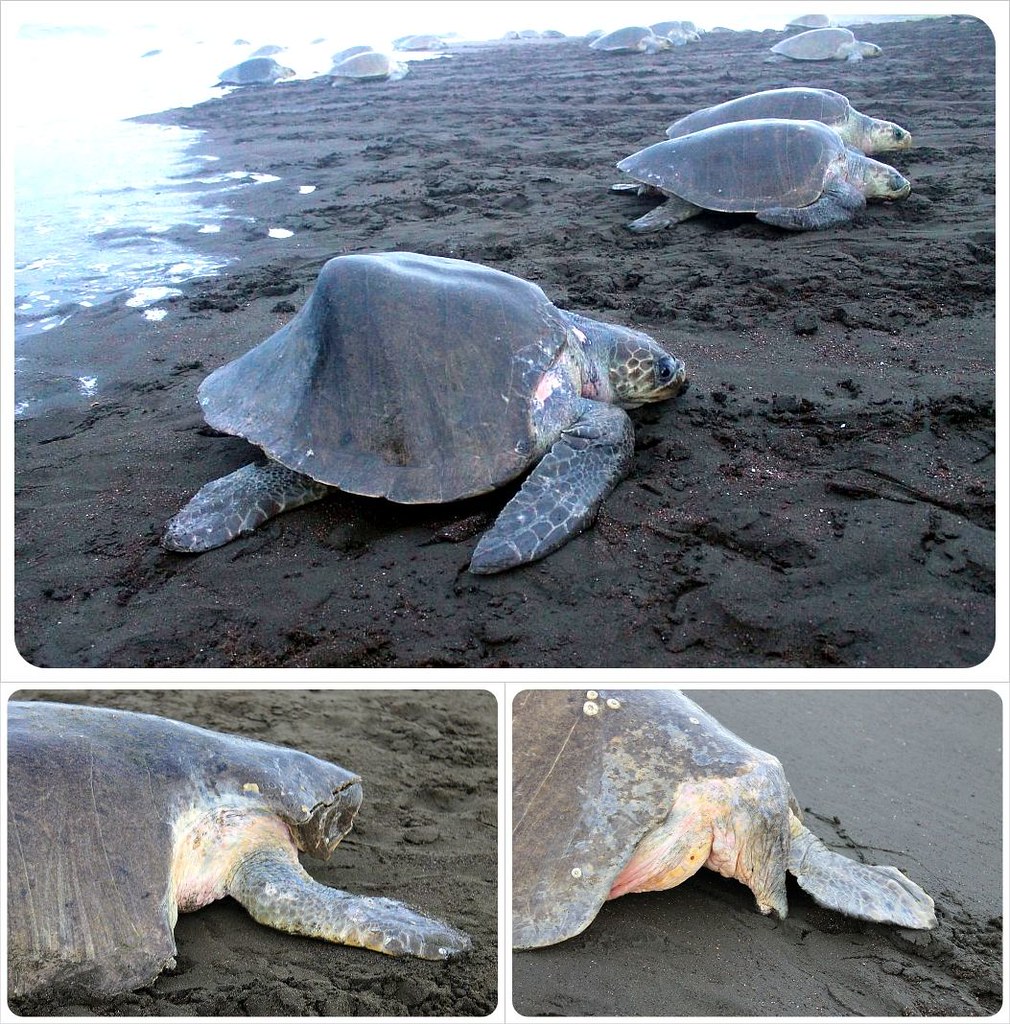 It is painful to watch these sick turtles, which have an even harder time dragging themselves onto the shore so much more slowly than the others. Many don’t have the power to reach safe nesting points out of the way of the tide, digging dangerously close to the shore. I wish there was more I could do, but we can only help by turning over the turtles when a wave crashes in and flips them over. 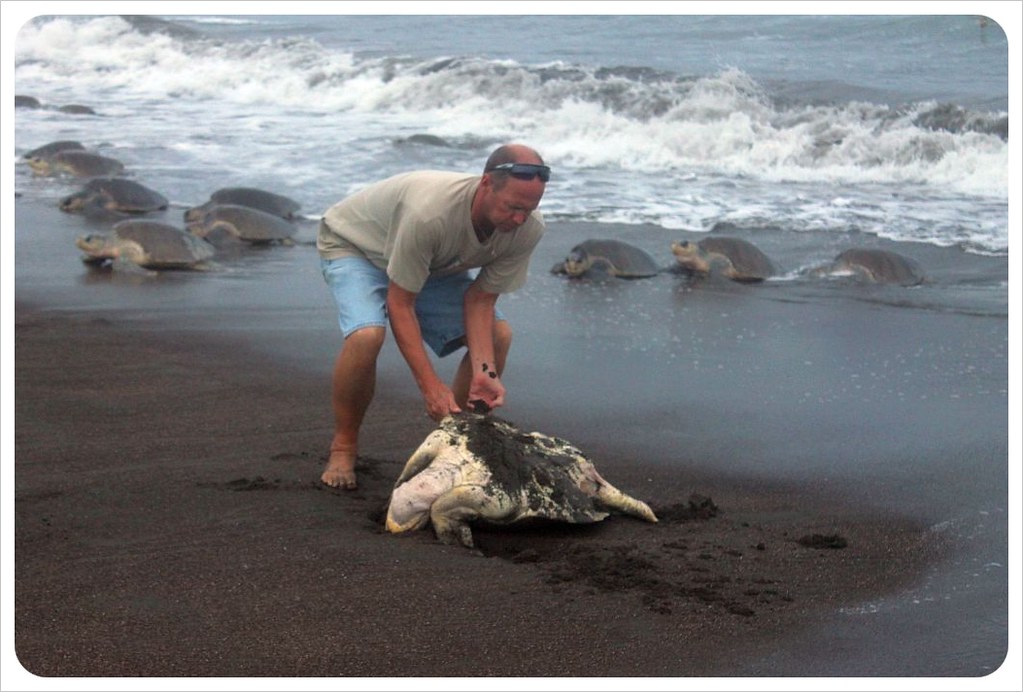 As this last batch of turtles limp back into the sea, the arribada comes to an end. 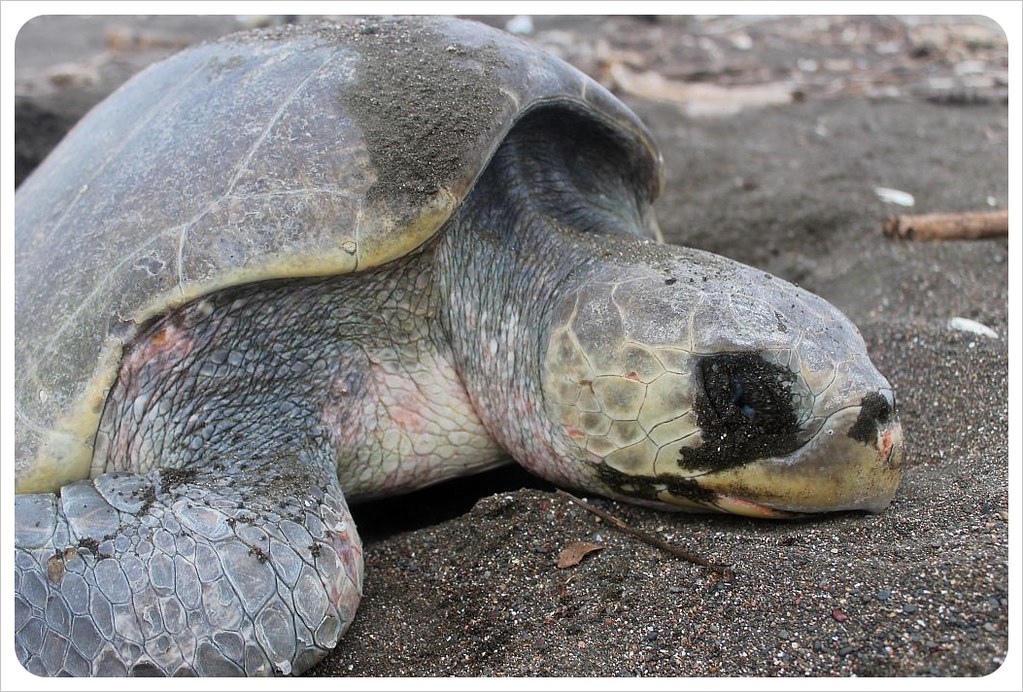 How to get to Ostional

Ostional is located on the Nicoya peninsula; a small, unremarkable village most of the year, but there are a couple of hotels and a few restaurants.

Located around 90 minutes north of Samara or a six-hour drive from San Jose, the nearest bigger town is Nosara, a popular surf spot, about half an hour south of Ostional. Flights leave occasionally from Nosara to San Jose and Liberia.

Note: When renting a car, a 4×4 is a necessity to cross several rivers, which, in the rainy season, can be a challenge to cross between Nosara and Ostional.

Where to stay in Ostional

There are also several Airbnb vacation rentals in Ostional, if you prefer staying in an apartment.

Tip: If you don’t have an Airbnb account yet, use my referral code to sign up and get up to $40 off your first booking.

Since there aren’t many accommodation options in Ostional, you might want to browse hotels in Nosara (especially if you want to treat yourself to a more luxurious hotel), which is a small surf town 30 mins south of Ostional – there are plenty of hotels and Airbnb’s in Nosara.

About 20 mins north of Ostional is San Juanillo, a small village with a beautiful white sand beach. It’s not touristy at all, but there are a couple of hotels:

How to see the turtle arribada in Ostional 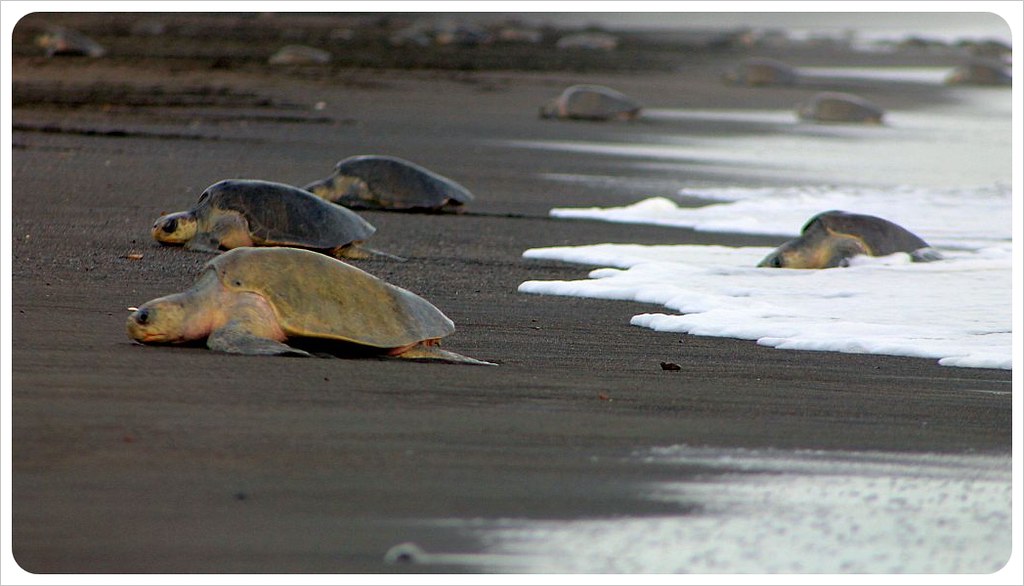 Help the turtles in Ostional

Ostional is a remote beach and arribadas take place in the low season. This combination means that there are never enough volunteers to help the hatchlings.

If you would like to help during a turtle arribada in Ostional, reach out to the following organizations for current information about arribada start times and when hatchlings need assistance with their epic journey to the sea: 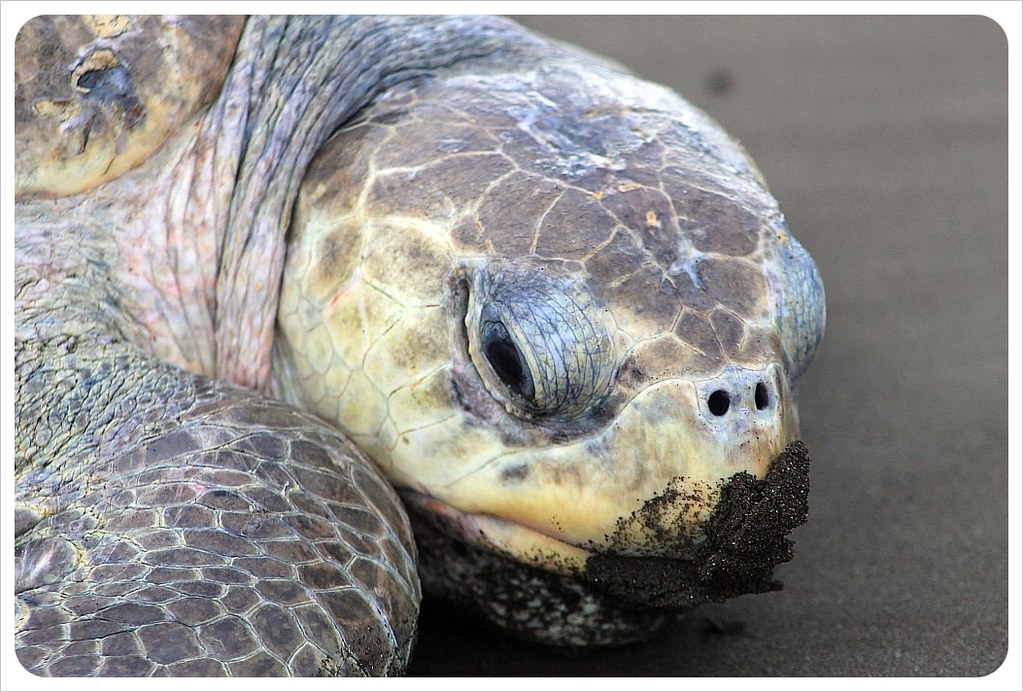 What I Wonder When I Wonder: What is there to enjoy about air travel?