What is going on here?! The Thaipusam festival

Thaipusam is a Hindu festival celebrated each year on the full moon in either January or February each year by the Tamil community. Originating from the Tamil Nadu region of India and Northern Sri Lanka, the Thaipusam celebrations also take place in Malaysia and Singapore, where there are also large representations of the Tamil community.

The name ThaiPusam comes from the Tamil month ‘Thai’, during which the celebrations take place, and ‘pusam’, the name of the star at its highest point during the festival.

A procession of coconuts and spears

The festival commemorates the victory of the Hindu god Lord Murugan over the demon Tarakusaran with a ‘vel’, or spear, and thus ridding them of evil.

Although the festival is celebrated over two days, devotees begin a period of fasting and prayer a full 48 hours before Thaipusam. Here in Malaysia, the biggest Thaipusam festivities take place at the Batu Caves near Kuala Lumpur, where over one million devotees join the 13-kilometer long procession from Central KL to the Caves. 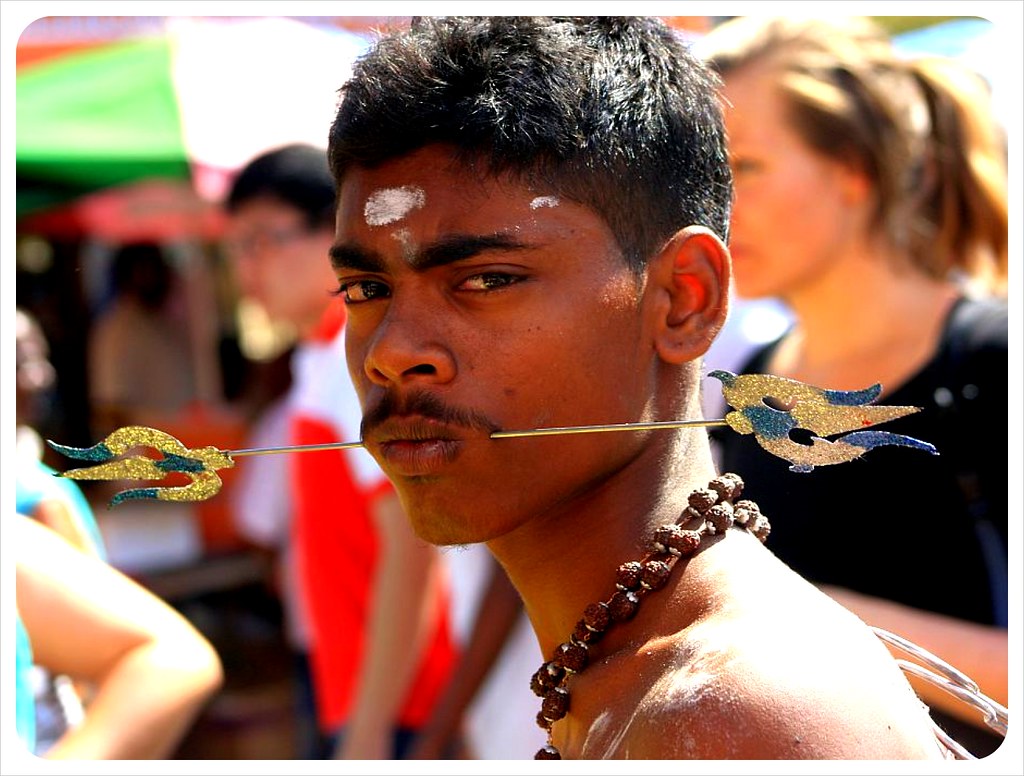 Lucky for us, Penang has the second-biggest festivities of the country, with over 200,000 people flocking to the island for it – us included! Here in Penang, the procession starts at a temple in Georgetown’s Little India neighborhood and makes its way over several kilometers to Nattukkottai Chettiar Temple on top of a hill outside of town. 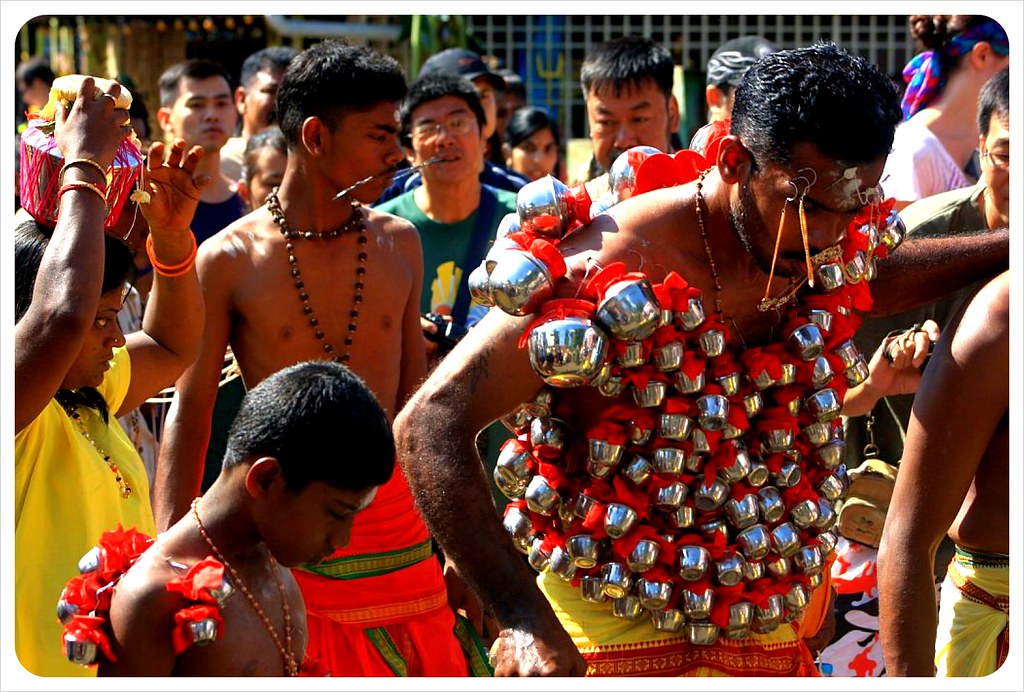 On the first day of Thaipusam, a statue of Lord Murugan is carried to the temple and devotees smash coconuts as an offering to the deity.

On the second day, devotees shave their heads and make their pilgrimage to the temple while performing acts of devotion. This often includes ‘kavadi’-bearers (kavadi meaning burden) who carry their burden – ranging from a simple milk pot to the more extreme mortification of flesh. 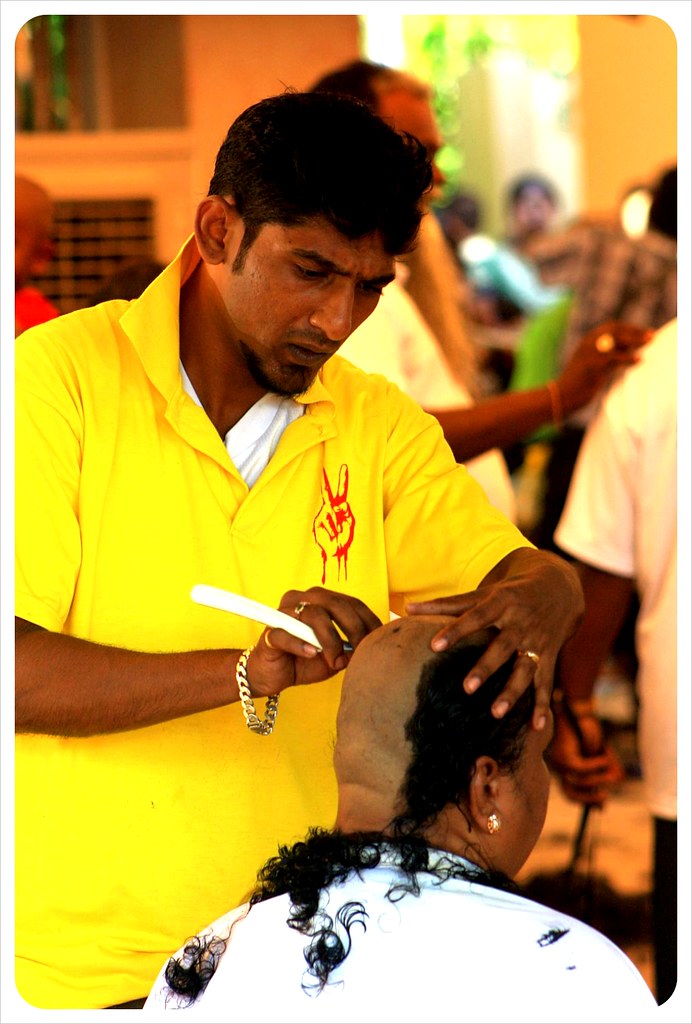 Why go through all of this pain?

This self-mutilation is done with a spear, resembling the ‘vel’ Murugan used to vanquish the evil demon Tarakusaran. Many devotees only pierce their tongue for this occasion, but it is hard not to notice the hundreds, even thousands, who pierce their cheeks with vels, or undergo even more extreme pain to thank Murugan. 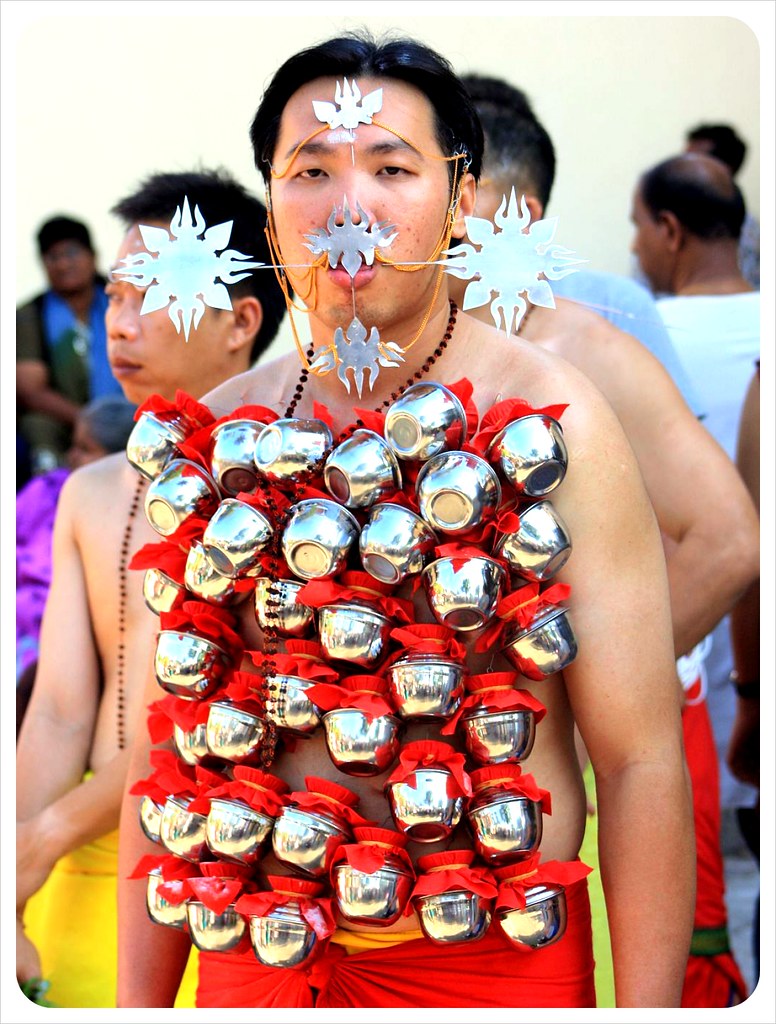 The more pain endured by the devotee, the greater the merits bestowed upon them by the god of war Murugan. 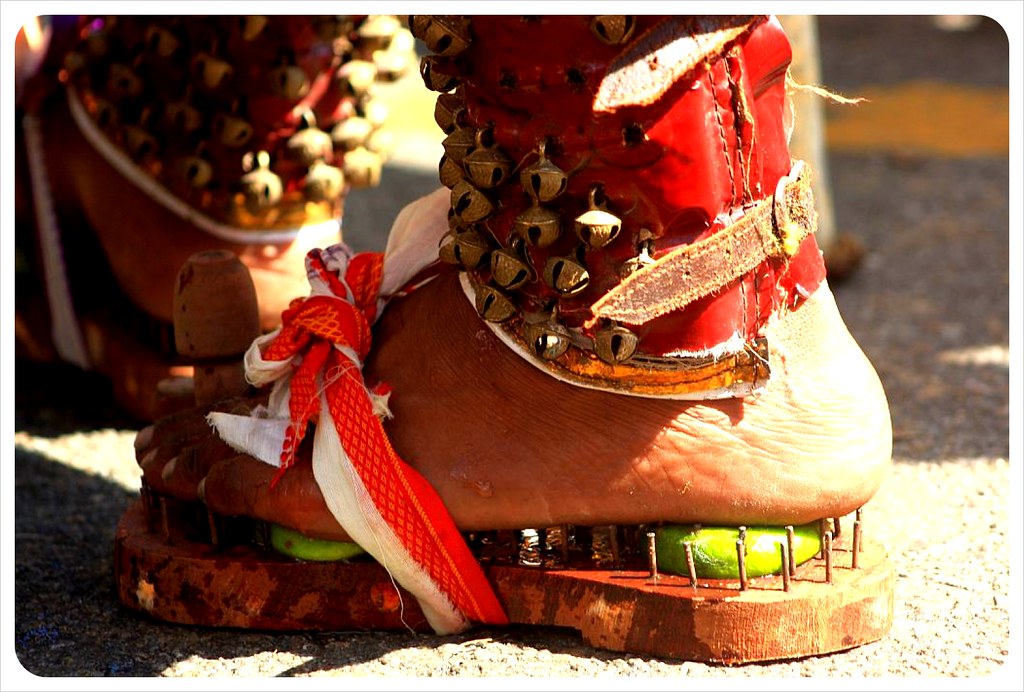 The pierced tongue also prevents the devotees from speaking, which is another sign of atonement. 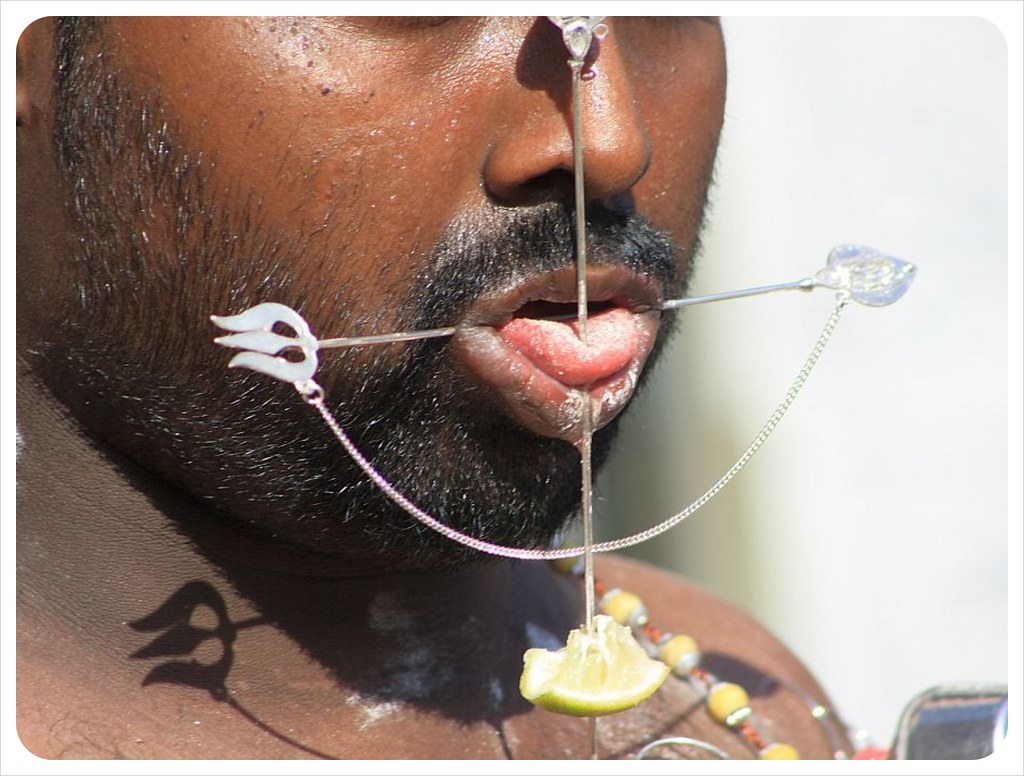 The hooks in the back are another form of burden that a kavadi-bearer can endure, and some of the devotees do not only have hooks in their backs, but also pull another devotee behind them by those hooks.

Another burden is the decorated canopy which is carried to the temples on the shoulders of the devotee. Some of the kavadi-bearers only carry the canopy, while others have additional piercings and hooks. 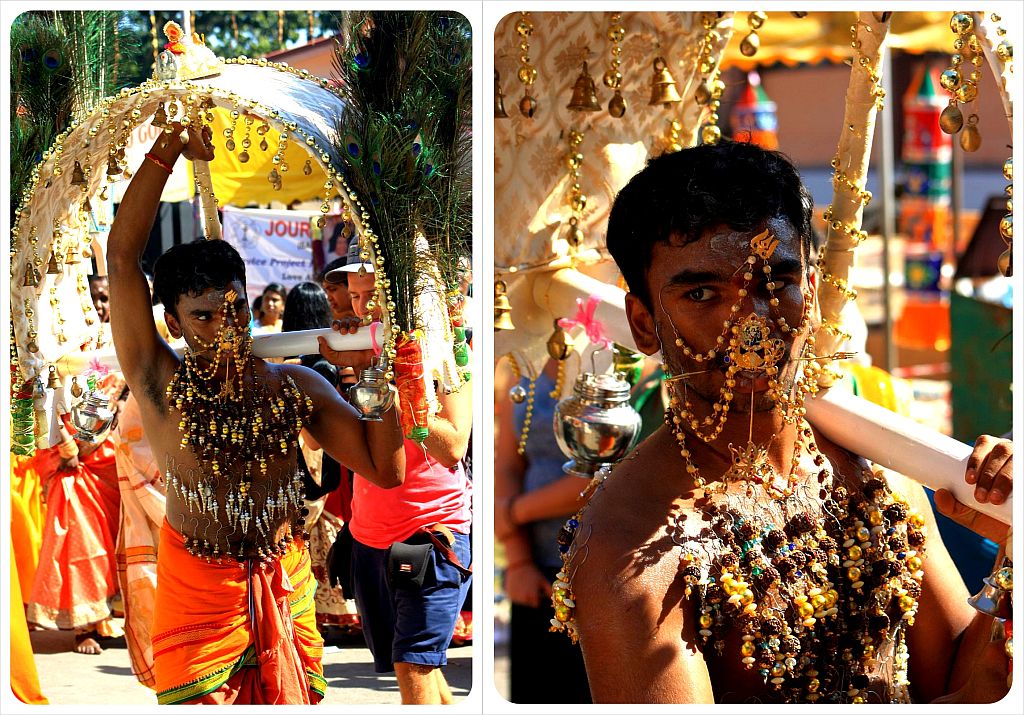 While many of the devotees are Indians, there are also a surprising number of Chinese kavadi-bearers in the procession. 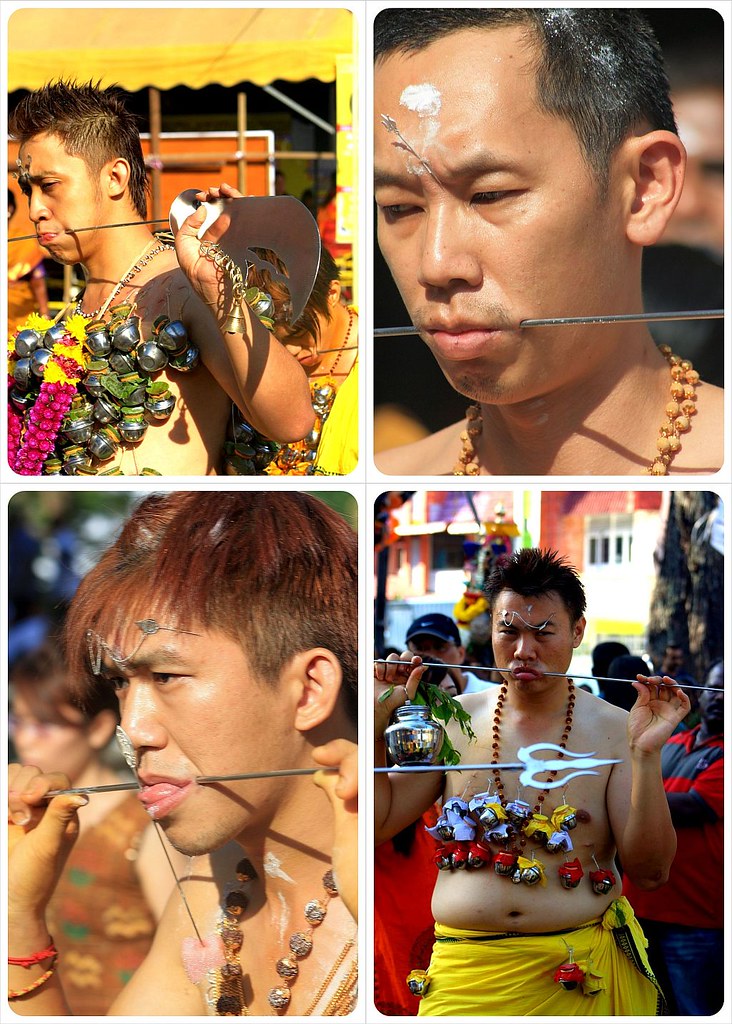 Even if only one person in the family is a kavadi-bearer, the entire family dresses up in their traditional saris and supports their family member in their act of devotion for Lord Muruga. 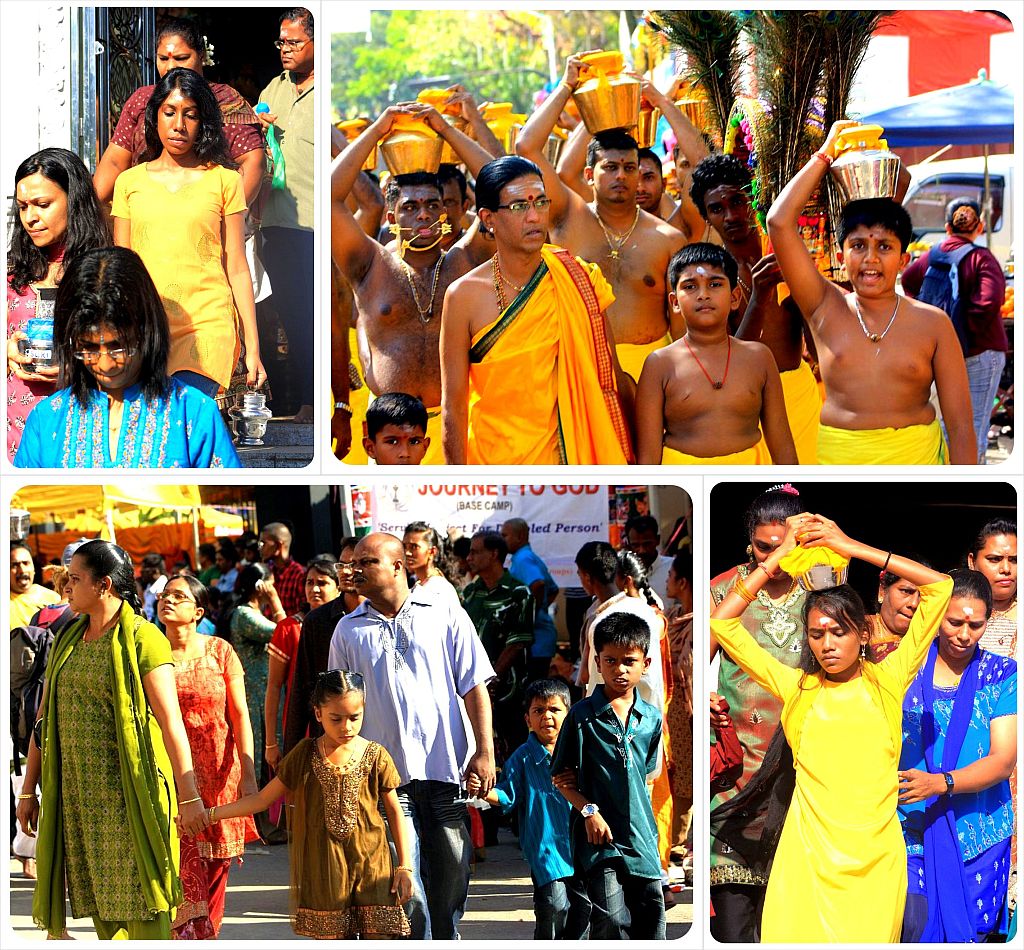 Singing, dancing, drums, and loud music are also a big part of the celebrations.

Before devotees make their way up to the temple on top of the hill, they have to take their shoes off. With more than 200,000 people, there are hundreds of shoes waiting for their owners to return… 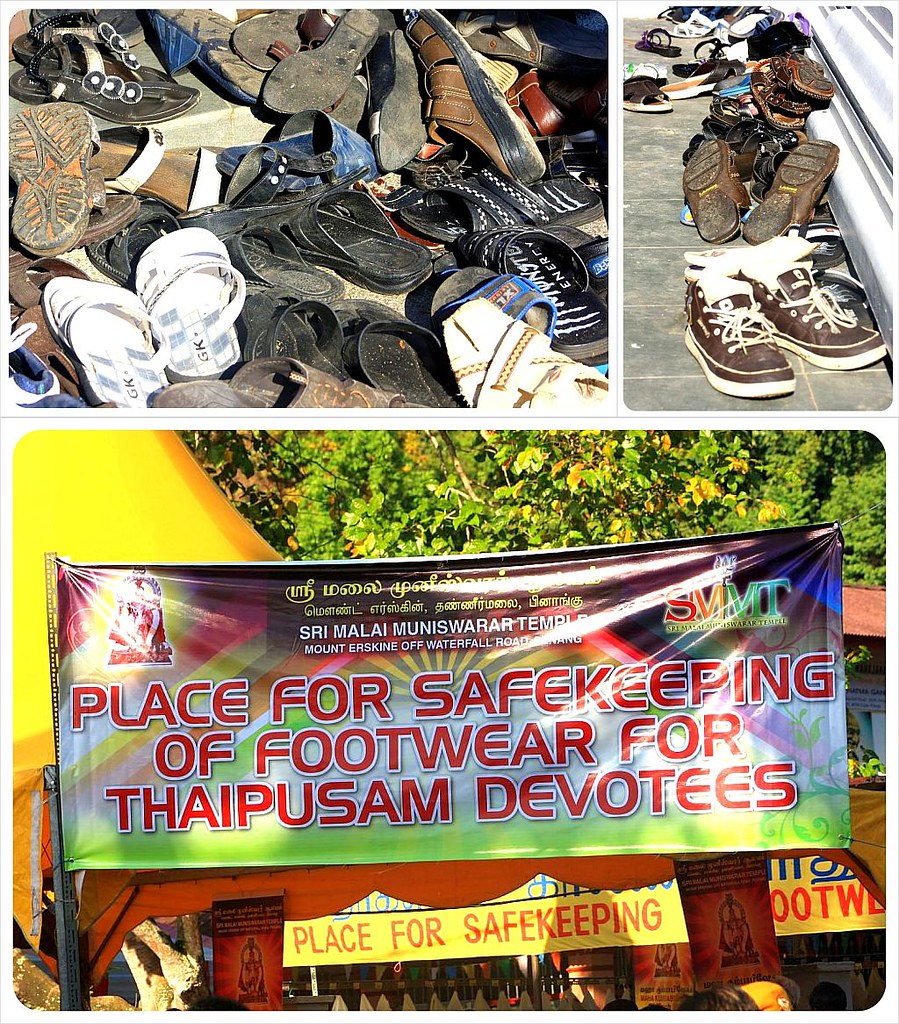 Cow milk and the silver jars in which the milk is kept and transported up on top of the hill can be purchased at the many stands around the temple. 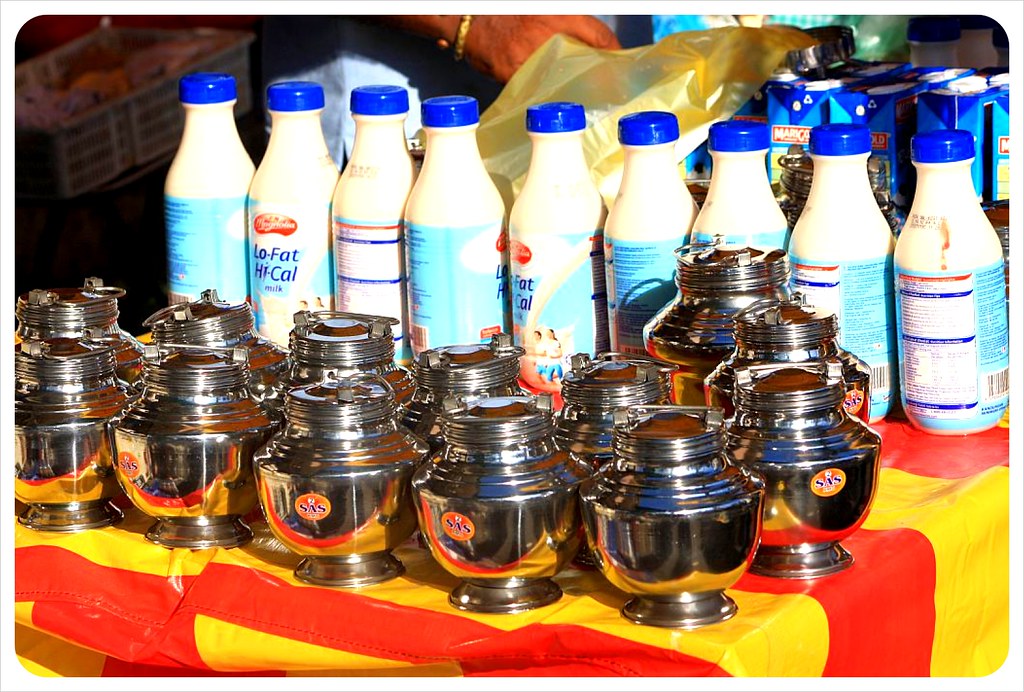 And of course there is plenty of delicious Indian food – and sweets! 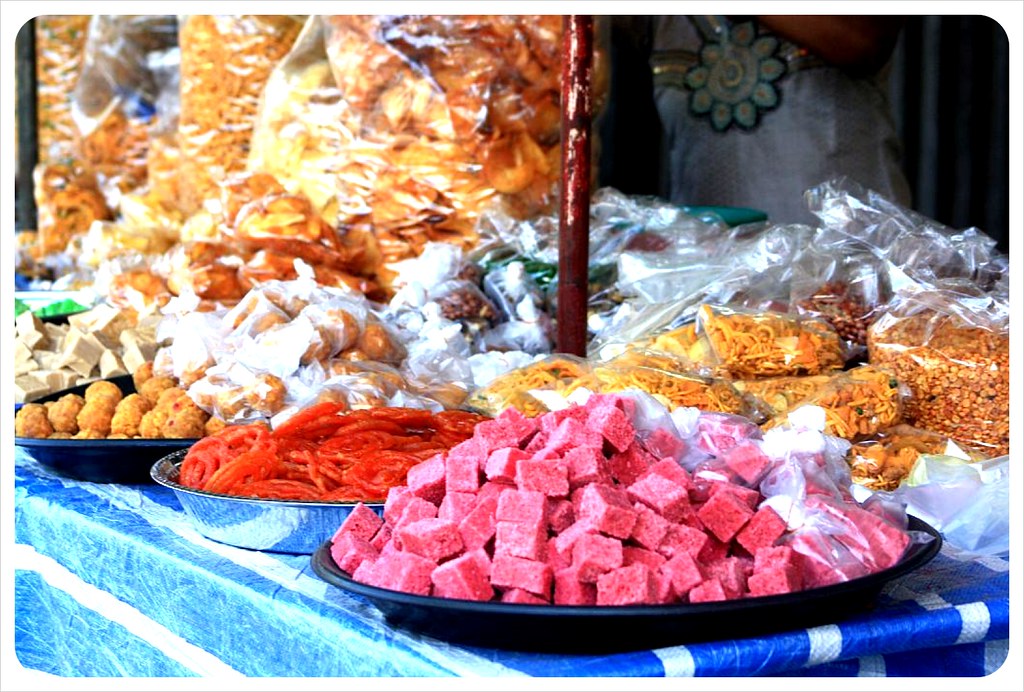 At the end of the second day, the chariot is brought back to Little India in a procession back into town from Nattukkottai Chettiar Temple, and arrvies there just before dawn on the following day. 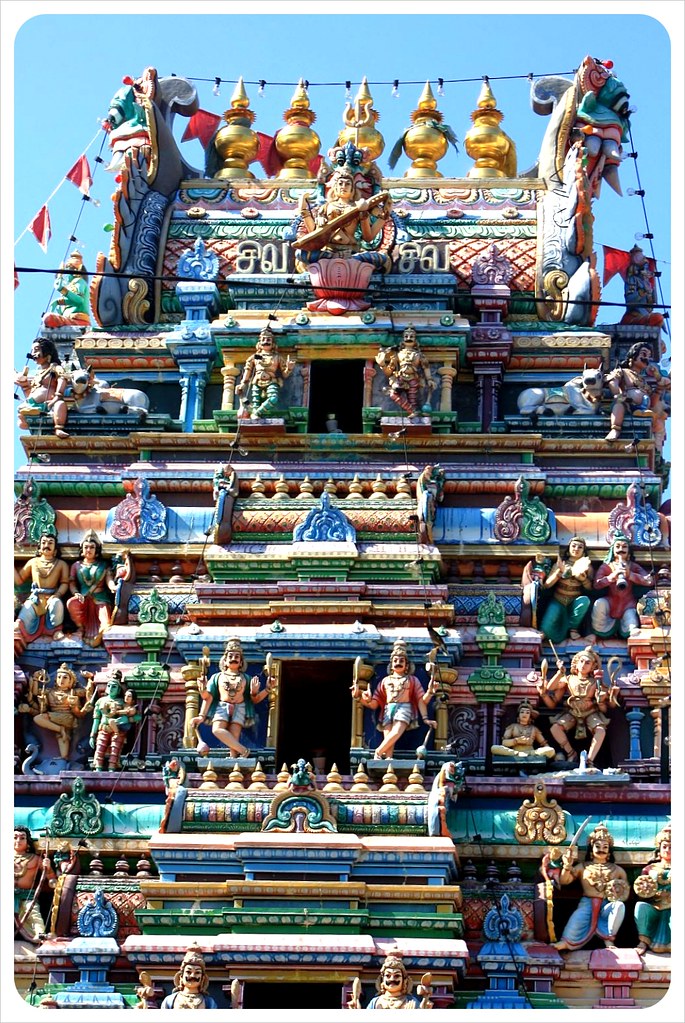 Don’t try this at home!

You might notice a distinct lack of blood here in these images, considering the amount of flesh just recently pierced. Some say this is due to the fasting, or an all-vegetarian diet, and both most likely play a role, as it is due in part to low blood pressure which results from the fasting. The devotees also do not suffer from scars when the piercings are removed, thanks to a special healing mixture of powders and creams tested over the centuries. Each year, at least a few inexperienced foreigners attempt to take full part in the festivities, and wind up getting fairly hurt. So while this is a once-in-a-lifetime festival to visit – we say leave your ‘vels’ at home! 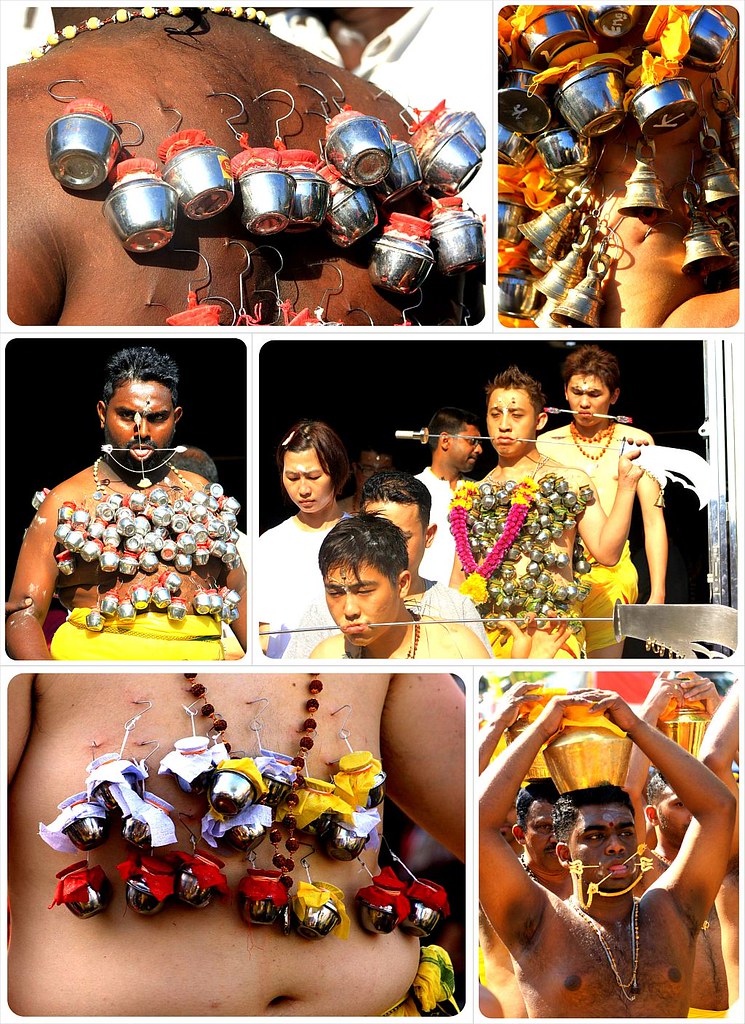 You can see more photos of Thaipusam in Penang in our photo album on Facebook.

Quick Guide To Buying A Boat To Sail Around The World