If you like to alternate woo-ing at the top of your lungs with gulping alcohol from a plastic cup on the street, you might think that the open container laws on New Orleans’ Bourbon Street were written for your convenience. A more likely scenario stems from the fact that this famous street was once the very pulse of the city itself, and lively celebration a nightly occurrence.

Of course Bourbon Street was on our radar on our big trip to New Orleans, but after our overpriced Hurricanes from Pat O’Briens and a few minutes watching booze-thirsty tourists falling out of tacky ‘dance’ (read: strip) clubs, we kept right on walking…and walking…and cycling…and riding… 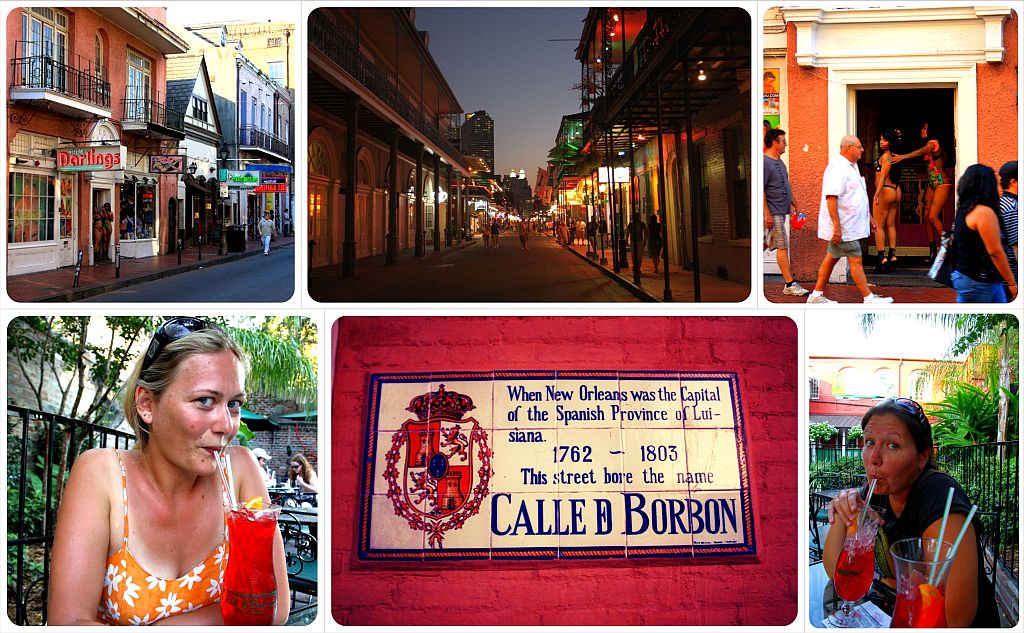 What we discovered were neighborhoods as distinct and unique as the city itself, brimming over with culture, class and a style which ignited a passion for New Orleans inside us we could never have expected. Read on for our tips on going beyond Bourbon Street for an unforgettable New Orleans experience.

In New Orleans, the most unique city in the U.S., we were constantly reminded of places we have been around the world. Most predictably, this happened first in the French Quarter – but not exactly why you might think.

Bourbon Street is located in the French Quarter, which means wandering just a few blocks brings you to sleepy side streets lined with with gorgeous colonial architecture. What we didn’t expect was that the Spanish influenced this quarter as much as the French, having been in power here from 1762-1803. The ‘Rues’ (French for streets) were also marked in Spanish with decorative tiles typically seen in Spanish cities like Madrid even today, and because two major fires ravished the quarter in the late 1700s, Spanish design like wrought iron balconies and central courtyards replaced much of the previous French construction. In reality, however, most of the 2,900 buildings in the quarter are either Creole, Greek revival style or, post-Louisiana Purchase of 1803, in the traditional Victorian style of the day. We were actually reminded of another city colonized by the Spanish here. A walk through the French Quarter reminded us of Casco Viejo, in Panama City. 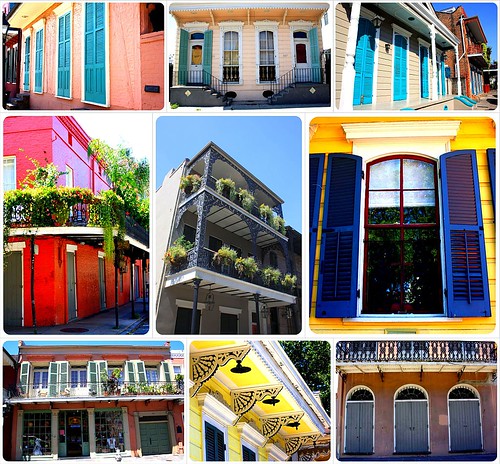 Eat and shop at the French Market

Popular with tourists and locals alike, the French Market is also located in the French Quarter, just off famous Jackson Square, and stretching down to the Mississippi from there.

A popular trading post since 1791 when the Native Americans traded herbs and spices to French, Spanish, Italian, German and Caribbean immigrants, today the most well-known eatery has got to be Café du Monde. In this French-influenced café, we washed down beignets with chicory coffee served by an entirely Chinese staff. Only in New Orleans. 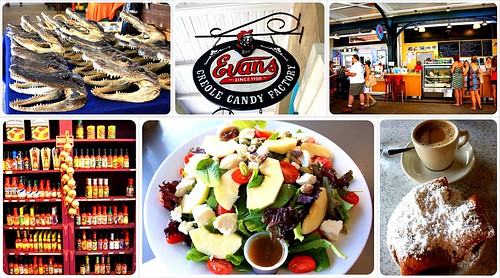 The sprawling market is also home to a European-style food market (where we had delicious salads), and a flea market packed with tourist kitsch and musical masterpieces. Digging through albums and CDs reveals music by New Orleans locals – those who made it big, and those who plow through life proudly playing small stages seven nights a week. The lesson we took home is that New Orleans pride goes beyond anything felt in other cities (save for New Yorkers). The people know their history, their roots, they love their local musicians and their place in the music world. Transplants to New Orleans don’t just end up here, they come here on purpose, and at times, have more knowledge and pride than even the locals.

One late afternoon we cycled through the Faubourg Marigny neighborhood, just as the blazing New Orleans sun had admitted defeat and begun its descent.

The golden glow colored the classic Creole cottages, which reminded us of the clap-houses of Belize, each reflecting the love invested by its residents. Some of these colorful one-story houses are falling apart while others keep neatly manicured gardens and watch the world go by from rocking chairs on their front stoops. 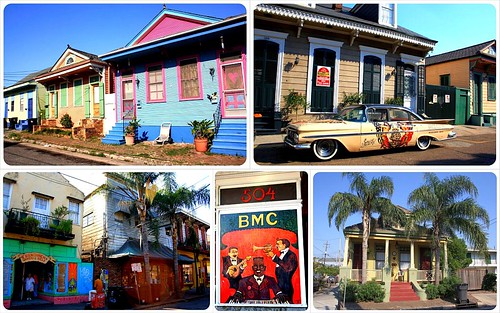 Years ago, the French Quarter claimed fame with its Dixieland jazz, but today, Marigny’s Frenchman Street is ground zero for live music in New Orleans. The locals don’t want you to know that, though, and are more than content with you staying over on Bourbon Street.

But I’ll never forget what was sadly our only night out on Frenchman Street. It was the experience that signified the culmination and purpose in our 30-day road trip from New York to New Orleans. Live music flowed out of every tiny joint. People poured out onto the sidewalks. A mix of vintage bombshells and bikers covered in leather and tattoos were back-slapping and laughing so genuinely together. The kind of friendliness you see in films from the 40s or 50s and wonder if strangers were ever that friendly to each other. We hopped from bar to bar, each with their own live band spitting jazz, blues and funk, and ended the night watching a dozen or so guys pound out a two-hour, never-ending jam on five trombones, a sizzling electric guitar, three screaming trumpets and two booming tubas. The players were a mix of black and white dressed in hipster skinny jeans and baggy hip hop pants, teens and a couple with salt and pepper in their hair. It may have been the booze, but more likely the beats that made my heart swell at bearing witness to this entirely unique scene happening nowhere else in the world like it does on Frenchman Street.

Outdoor Art at the Sculpture Park

Although we had already achieved that happy ending of our road trip, the access to creativity didn’t end. For a combination of art and a cool breeze, we cycled up to the Sydney Walda Besthoff Sculpture Garden, a park with meandering footpaths to view the over 60 sculptures by artists from around the world. We spent over an hour relaxing and admiring world-class art for free. The sculpture garden is open seven days a week, so perfect for whenever a peaceful escape is needed. 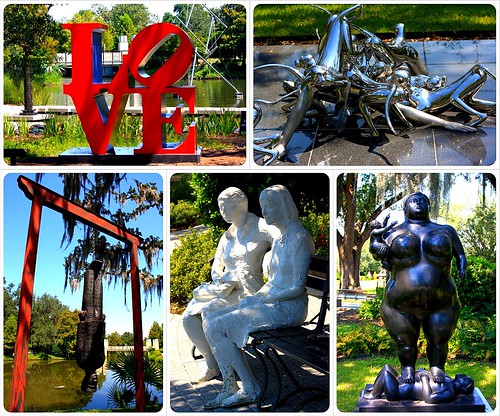 Before we visited here, I imagined Magazine Street to be similar to London’s Fleet Street, which was historically home to the newspaper and media industry through the 20th century. Quite the opposite, in fact, Magazine refers to the French world for shopping ‘magasin’. Mainly window shoppers these days, we managed to walk for miles and miles, peeking into the hundreds of charming, unique shops and restaurants that give this part of New Orleans a local, small town feel. 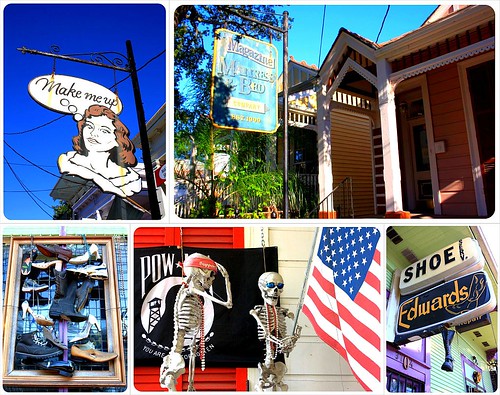 It seems like we are always talking about cemeteries, but the ones in New Orleans are legitimately distinct. Because the city is built on swampland, all white above-ground tombs form “cities of the dead,” more similar to cemeteries in Latin America than anywhere else in the US. The easiest to reach on foot from the French Quarter is the St Louis Cemetery #1 on Basin Street.

This cemetery is the burial place for legendary Voodoo Queen Marie Laveau. We easily spotted her tomb. The dozens of X’s scrawled across it gave it away, but the offerings that believers leave are what’s truly interesting: alcohol bottles, cigarette packs, but mostly, and strangely, lip balm. Chap-stick. Why, we don’t know.

Laveau was famous as an oracle, performing private rituals behind her cottage in St Ann Street in the French Quarter. A devout catholic, her influence on Louisiana Voodoo affected many aspects of the practice first brought over by West Africans before mixing with French, Spanish and Creole customs and beliefs.

Today, the offerings are made in return for favors believers ask of Marie Laveau even in death and even gamblers shout her name for good luck. It is rumored, though entirely unofficial, that her grave has more visitors than Elvis Presley’s grave at Graceland.

How to Go Beyond

Streetcar: New Orleans runs several streetcar lines, used as a major mode of public transportation for the city. These antique vehicles run for long distances. In fact we would recommend riding at least one from end to end. 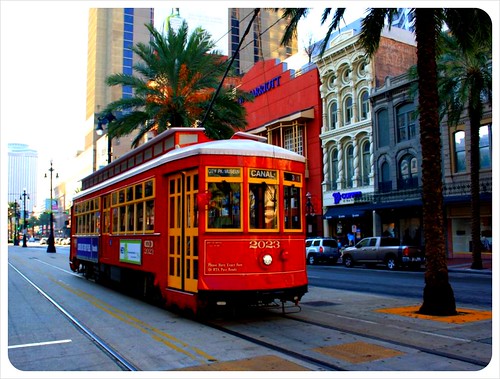 Bicycle: New Orleans is an easy cycling city (avoid summer midday heat) We rented two groovy bikes from the American Bike Rental Company in the French Quarter. The enthusiastic owner provided helpful maps with areas to visit and others which are better to avoid. 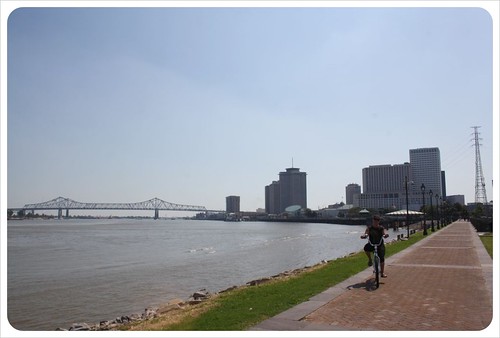