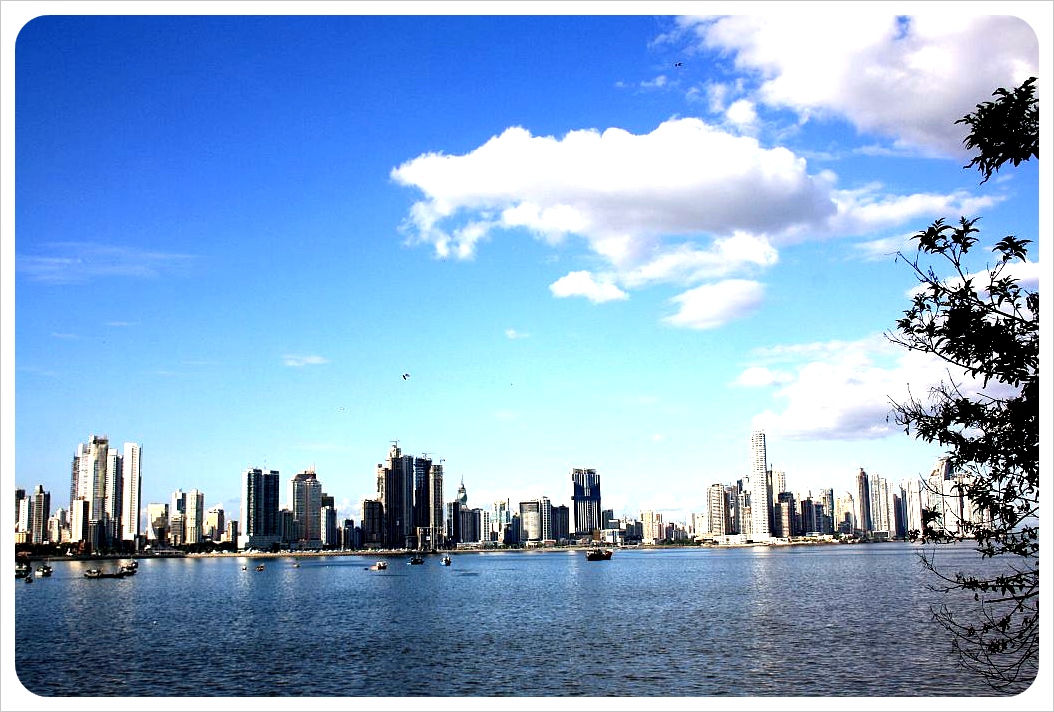 You’re visiting Panama’s capital and don’t know what to do? Here are five great things to do in Panama City – ranging from urban jungle to a beach escape:

1 Visit the Panama Canal – The vein of Panama

The Canal is the pulse of Panama and what makes the city tick, feeding it with a steady (and tremendous) source of income and international respect and fame. The canal cuts 51 miles east to west through the country, the impressive Miraflores locks are the first set of locks closest to Panama City, and are by far the most visitor-friendly, with a large visitor center, a museum detailing the canal’s history and a small cinema which shows a short film about the construction of the canal. 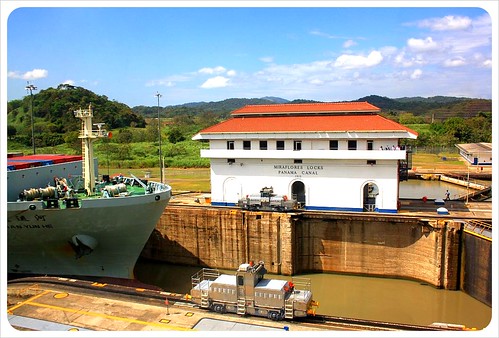 Once outside, there are several terraces to view the colossal container ships being raised or lowered through the locks. Ships carrying over 4,400 containers squeeze through the canal, paying per pound upwards of $400,000 each time to pass. In the mornings, ships heading from the Pacific to the Atlantic go through, the direction is then reversed in the afternoons. There are excellent explanations in English and Spanish over the speakers while the ships pass through, and you leave feeling very informed about how the Panama Canal (and international shipping) works. 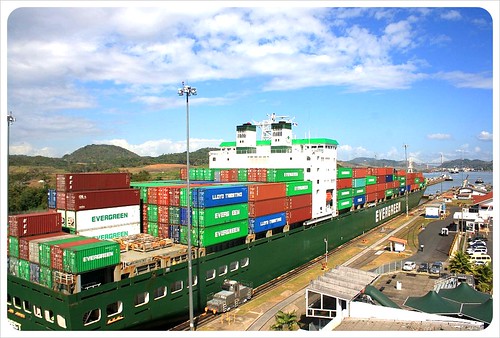 The locks are an easy 10-minute taxi ride outside of town. There is also a bus, leaving from Albrook Bus Terminal, which drops you off at the street leading to the docks (about 100m walk).

The Metropolitan Park is so much more than just a park. It’s an entire rain forest in the city, home to hundreds of animals and an oasis of peace and quiet in an otherwise very busy city. On a hike you can spot monkeys, anteaters, pacas, toucans, woodpeckers, hummingbirds, turtles, ‘jesus christ’ lizards, butterflies, snakes and many more. 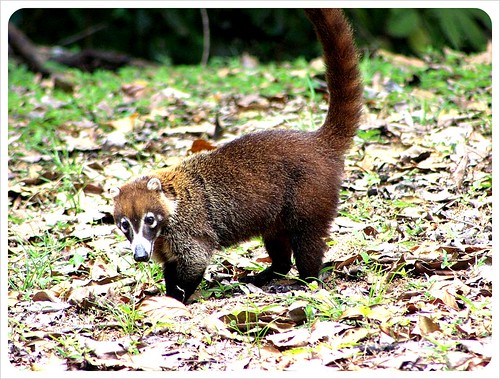 There are four trails leading up to Cedar Hill, which offers fabulous views over the city, and during the week you have the entire park to yourself. We spotted more animals in this jungle than in some National Parks, and here we were right in the city, just a 15 minute walk from a shopping mall to rival any large American mall. 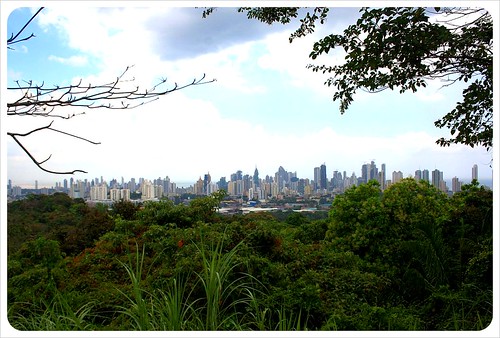 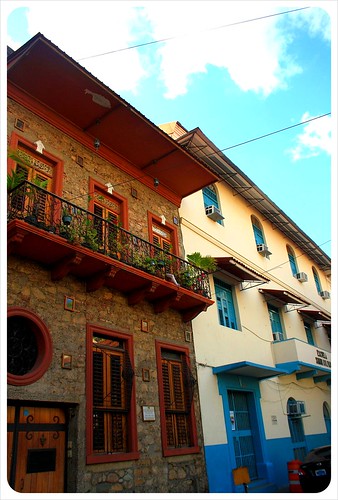 Casco Viejo is may be Panama City’s historic heart, and was declared a UNESCO World Heritage site in 1998. Many of the colonial buildings lining cobblestone alleys and grand-tree filled plazas for this reason have been restored, and the colonial churches and architecture make this part of Panama City feel more like Europe than anywhere else in Central America.

Take time to stroll through this beautiful quarter, which was even featured in the James Bond film ‘Quantum of Solace’. Although the true center of the city with time has shifted to the financial district 2 miles up the waterfront, Casco Viejo, has several excellent restaurants and cafes, cheap eats, and easily the best views of the stunning Panama City skyline.

4 A walk along the promenade – Skyscraper watching

Starting in Casco Viejo and ending at the Multicentro Shopping Center in the Bella Vista area of the city, there is a two-mile long promenade along the waterfront which is perfect for enjoying the skyscraper skyline set on the Pacific Ocean. You will walk toward this impressive architecture passing the famous fish market, the yacht harbor and dozens of freights ships lined up and waiting to pass through the Panama Canal. The promenade is well-paved and easy on the knees, and hundreds of joggers weave around you as you walk. 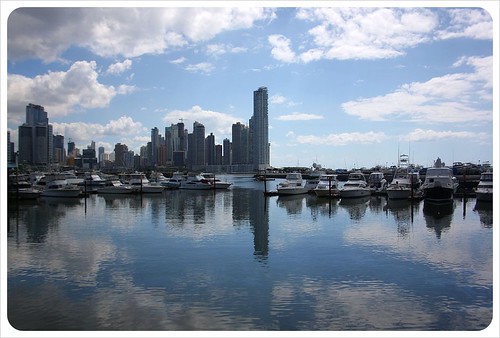 If you’re looking for a place to stay fit in Panama City, jogging here is perfect, just make sure to get up early, as the heat in the afternoon can be oppressive at best.

5 Be a beach bum – A day trip to Taboga Island

Panama City can get hot, extremely hot! If you have a few days in the city, Taboga Island makes for the perfect day trip. 12 miles off the coast, this little island does not have much more to offer than a small sandy beach and crystal clear water, but that’s all we needed to escape the bustle of the city just a 30-minute ferry ride away. If you get bored lying at the beach, this tiny island paradise also has hiking trails and the small village center has a couple of cheapish restaurants with excellent seafood and ice cold beer. 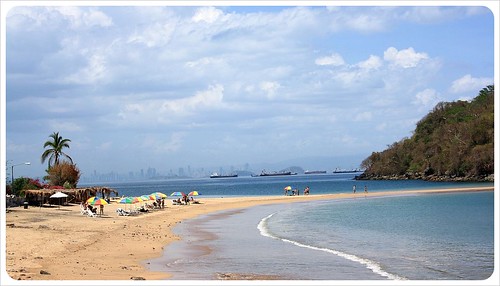 …And an extra tip for long-term Central America travelers:

We know that for backpackers, a shopping mall is not high up on the list, but if you have been on the road for a while, a visit to one of Panama City’s malls is like being teleported home. We had been traveling for over six months through Central America and welcomed the chance to sit in an air-conditioned movie theater (did we mention Panama is hot?) watching current and cheap ($3) Hollywood blockbusters in English at the Albrook mall (also the main bus terminal). And sure, we know you don’t want American fast food, we’re backpackers, right? Well… we scarfed down Taco Bell at the huge food court which has everything you could possible crave – Subway, Mickey D’s, Taco Bell, Dunkin Donuts, Popeyes, Wendy’s … you name it! 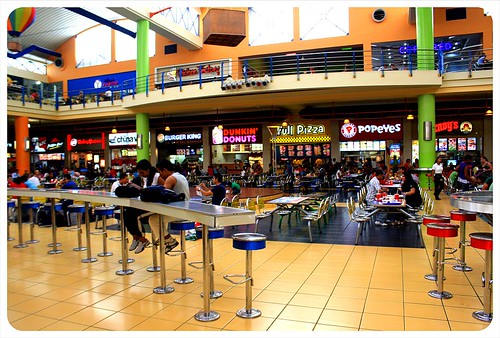 A last tip for long-term travelers: if your clothes need replacing (and not just in the form of traveler pants), the malls here are great for that. Not only do they have clothes that are more North American or European in style, they also have sizes to fit us non-Latinas out there!