Every once in a while, a country really takes us by surprise, like our deep love affair with Mexico. We had an inkling we would love Nicaragua, and after spending six weeks here, it was easy as pie to come up with a long list of favorites. Read on for thirty three things we love about Nicaragua, in no particular order.

1.    Leon
Well, we say in no particular order, but number one is by far our Nicaraguan number one. Leon is our favorite city in Nicaragua. It is constantly buzzing with vibrant, friendly locals, interesting colonial architecture, one of Central America’s most stunning cathedrals and countless restaurants and bars to eat and drink your nights away. We could easily spend much more time in this scorching hot city!

2.    Gallo Pinto
This dish, called ‘painted rooster’ is the national dish both of Nicaragua and Costa Rica (we preferred its taste in Nicaragua). Consisting of rice, beans and a magical mix of spices, we could literally eat Gallo Pinto morning, noon and night, although it is usually eaten for breakfast.

3.    La Calle Calzada in Granada
Normally we wouldn’t choose the main tourist center of a city as one of our favorite spots, but Granada’s Calle Calzada is lined with full green trees and one brightly colorful house after the next, from the Cathedral all the way down to Lake Nicaragua. Strolling past the (admittedly overpriced) restaurants and bars, the street is buzzing with diners, drinkers and street performers ranging from acrobats and breakdancers to a slew of international jewelry-sellers. 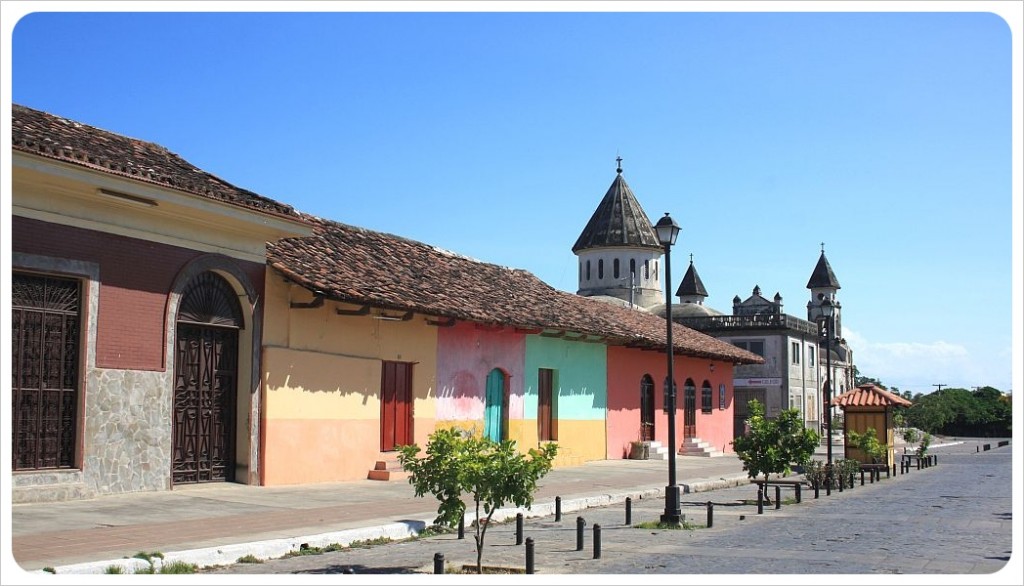 4.    Counting the stars on Little Corn Island
Every evening, as we walked back to Little Corn Beach and Bungalow hotel along the deserted beach, we swear we could see almost every star in the sky, which really made us realize just how remote this little island was in the middle of vast Caribbean sea.

5.    Pigs roaming the beach of Poneloya and the streets in Balgue on Ometepe Island 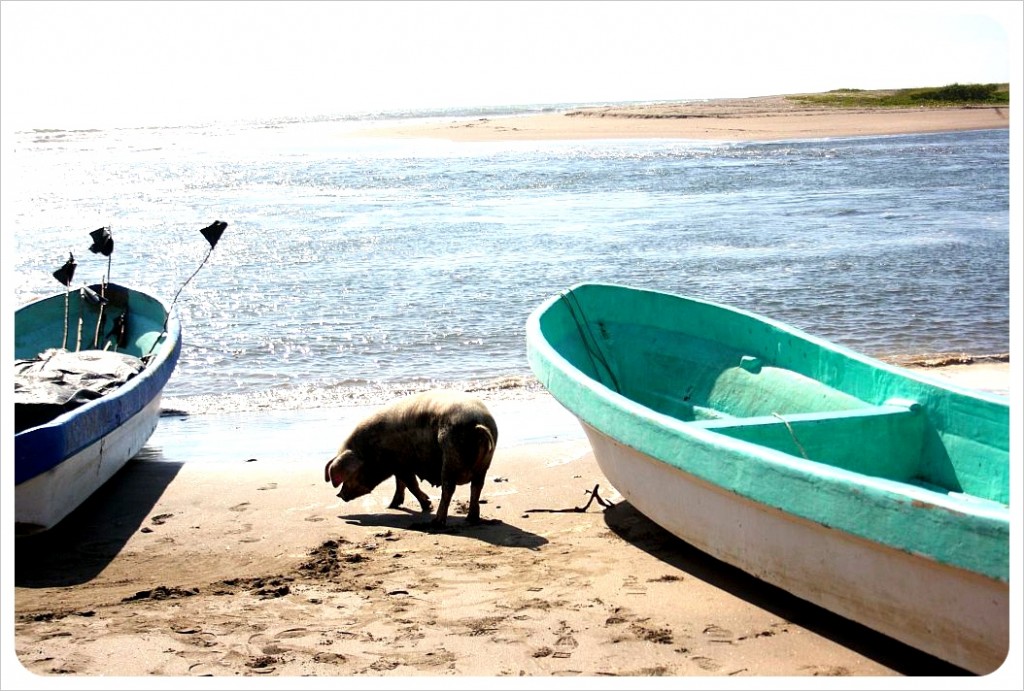 7.    Flor de Caña rum
The national rum of Nicaragua, this drink is sold throughout the world as one the best rums. Luckily, in Nicaragua, this homegrown drink is both delicious and cheap! Nicaraguans traditionally order an entire bottle, along with water or Coke, and split it across a table of four…often times, they then order another! 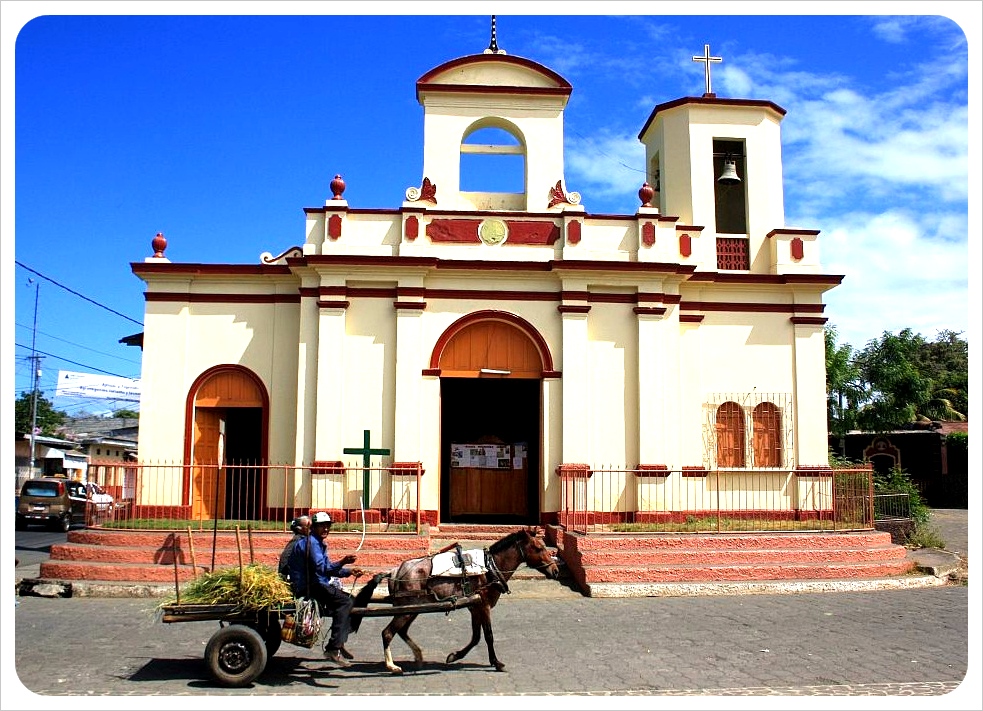 9.    El Desayunazo
Our favorite breakfast place in Leon, which made for some of our top food moments of 300 days of travel! We usually ordered Gallo Pinto and Huevos Rancheros.

10.    Riding our rented bicycles around Granada
We would encourage anyone who visits Granada to get out and see beyond the well-maintained town center. Our ride revealed a city with a very uneven distribution of wealth, much different to Leon, as well as the striking ruins of the old hospital and a peaceful poetry park far from the city center. 12.    Leon’s Central Market
By far one of the cleanest markets in Central America, Leon’s market is filled with friendly vendors, super cheap fruits & vegetables and is a ‘real’ market not overrun by tourists.

13.    The relaxing effects of a lazy day at Laguna de Apoyo

15.    Cheap street food in the Parque Central in Granada
Eating out in Granada can be ridiculously overpriced, aimed at the surprisingly large number of high-end tourists who flood the city. However, the city’s central park is anchored by four outdoor restaurants which serve up typical Nicaraguan food at typical Nicaraguan prices, plus there are several street food stands spread throughout the park, too.

16.    The Colibri Hostel in Leon
This hostel was our home for two full weeks, and we can highly recommend staying here.

17.   Toña beer
Maybe it was due to the hot, sunny days, but we loved Nicaraguan beer more than any other in Central America and Mexico. Our favorite by far was the delicious Toña beer! We miss you Toña!

18.    The creative street art in the northern city of Estelí 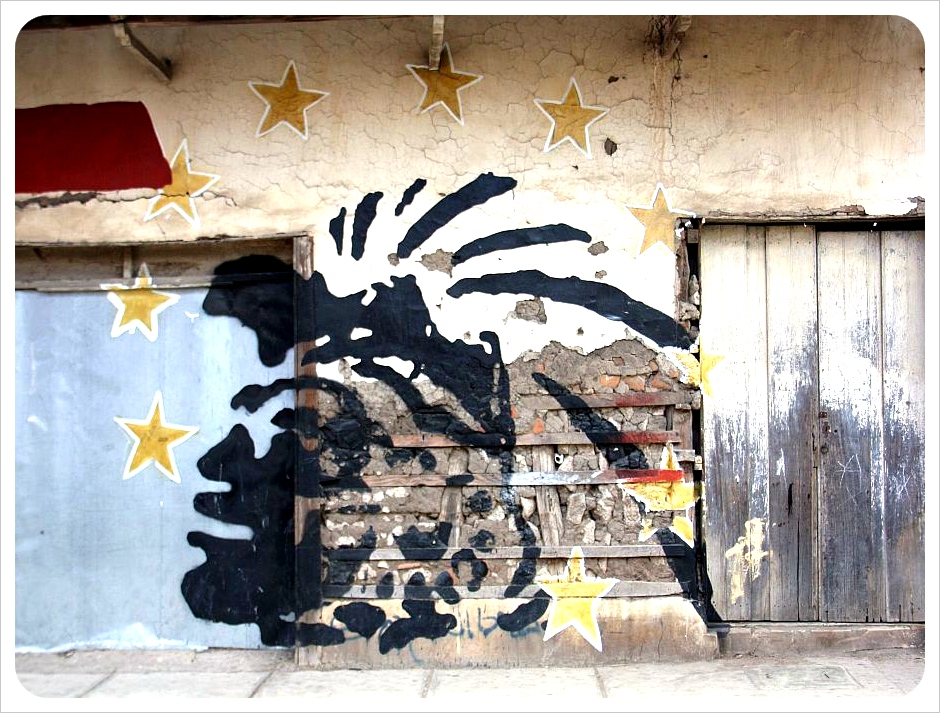 19.    Rocking chairs!
We loved rocking away in them or just watching the Nicaraguans chilling in their rocking chairs on the sidewalk in front of their house.

20.    Exploring  Masaya by horse-drawn taxi
Sure, you can jump in a horse-drawn carriage made for tourists in Granada, but while we were in the nearby city of Masaya, we discovered that the locals get from A to B by way of horse-drawn taxi. For less than a dollar we got a ‘lift’ from the central park down to the beautiful promenade overlooking the lake and the Masaya volcano. 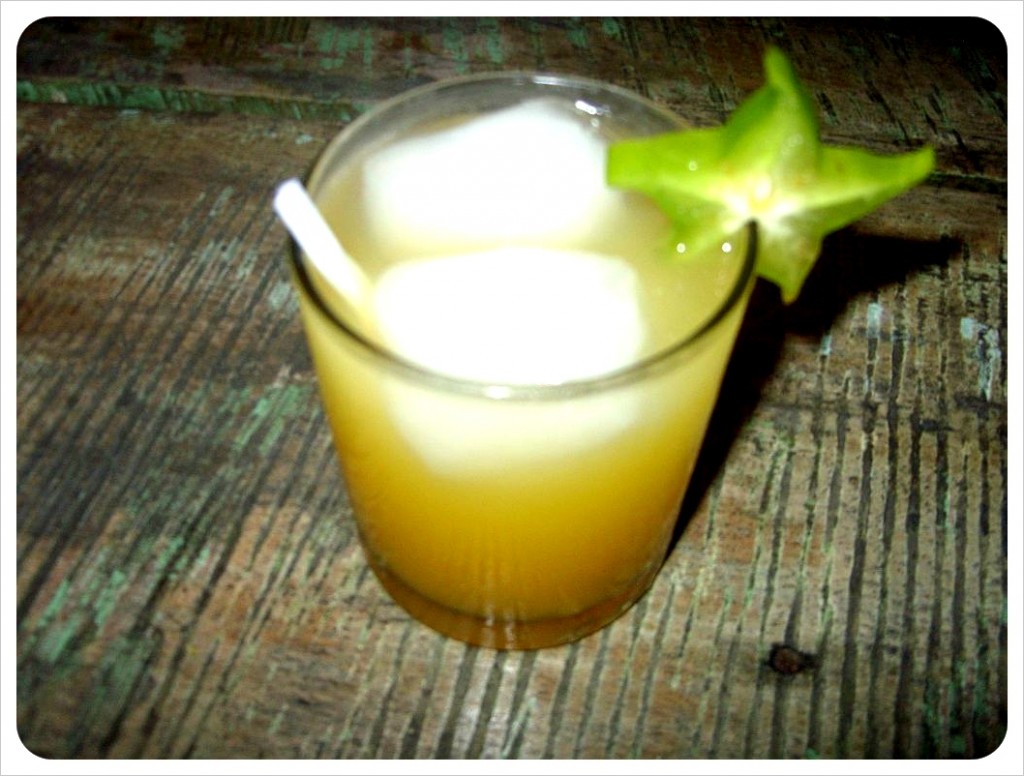 23.    El Rincón Pinareño restaurant in Estelí
This clean, bright local favorite has a large menu with Cuban and Nicaraguan dishes. We had the best Yucca dish in all of Nicaragua here, plus they offer a great selection of mouth-watering cakes.

24.    Chicken Buses, literally.
Latin America is famous for their ‘chicken buses’ but Nicaragua had more chickens and roosters per capita than anywhere else we experienced in Central America. 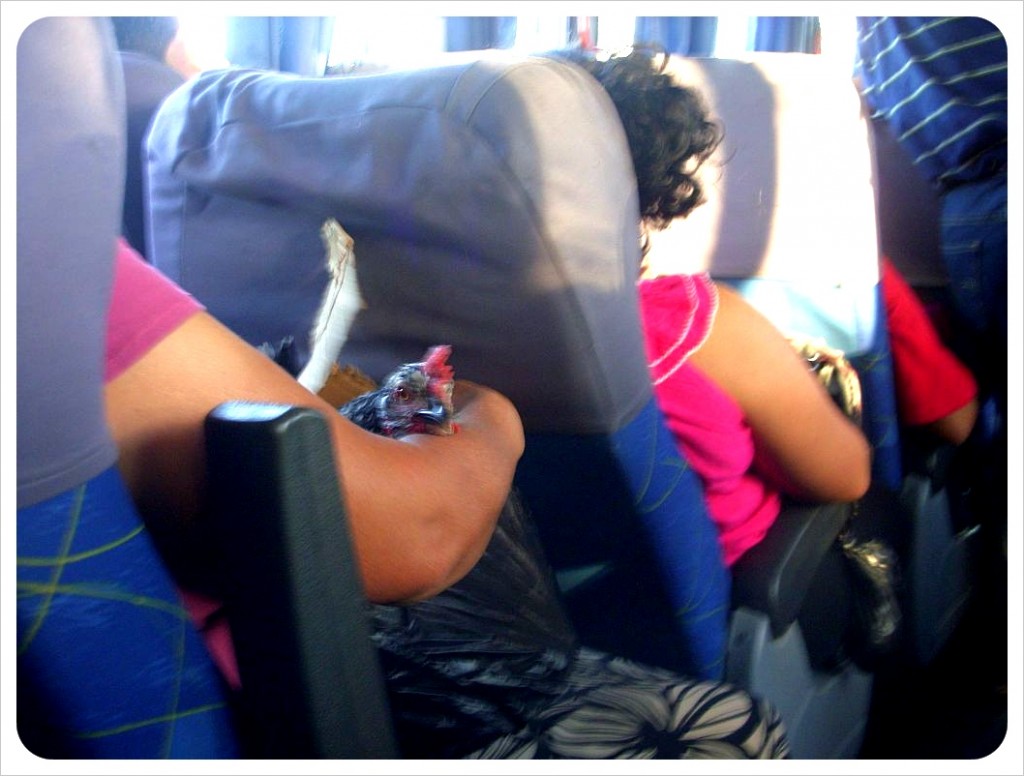 25.    Boarding down the Cerro Negro Volcano near Leon 27.     Passionate politically-charged poetry
Poetry in Nicaragua remains a relevant political tool and reveals the passion of the people. The national newspaper includes a poetry section every day, and internationally-famous poets, like the Leon local Ruben Dario, are cherished by all.

28.    Mama Sara
Mama Sara runs a little (unmarked) guest house in San Juan del Sur, and was one of the warmest Nicaraguans we met. She treated guests like her very own children, making us traditional food and drinks, and always making sure we had everything we needed. If you arrive in San Juan del Sur and a nice lady on her bicycle introduces herself as Mama Sara, make sure to go to her house at once!

29.    Choys Maní
This tasty little chocolate bar is similar to a Snickers but much better. 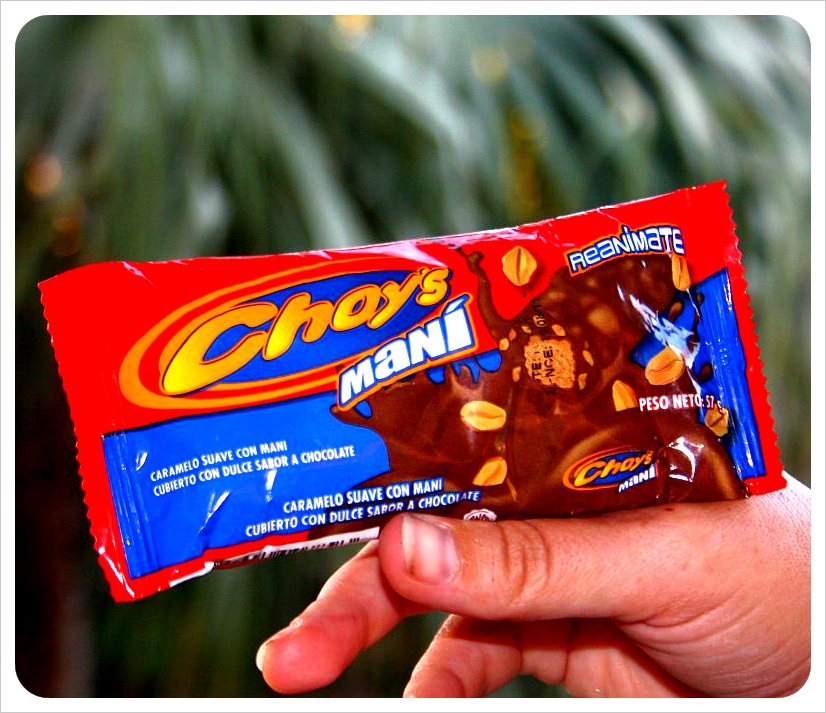 30.    Pathways on Little Corn Island
This tiny Caribbean island has no roads, only pathways, which makes the island feel that much more remote.

31.    The revolutionary spirit of Leon
Leon was the home of the revolutionaries, and this passion can still be seen in the street art, graffiti, murals and museums. 33.    Mariposa
We haven’t spoken much about our love at first sight experience in Leon as it was too close to our hearts. We fell in love with Mariposa, a little stray dog in Leon who instantly became attached to us. We bought her food, took her around town with us each day, even bought her a collar and leash. She was so well-behaved and loved us so much, people on the street would always remark what a great dog she was as we walked by. We almost took her with us. But after several long discussions we decided it would be better to find her a home in Leon and vowed not to leave until she was in safe, loving hands.  The owner of the Via Via hostel took her in, and Mariposa got a new family with three other canine brothers and sisters. If you go to Leon, make sure to give a bit of your patronage to the caring, good people at Via Via (and if you ask about Mariposa, please give us an update!) 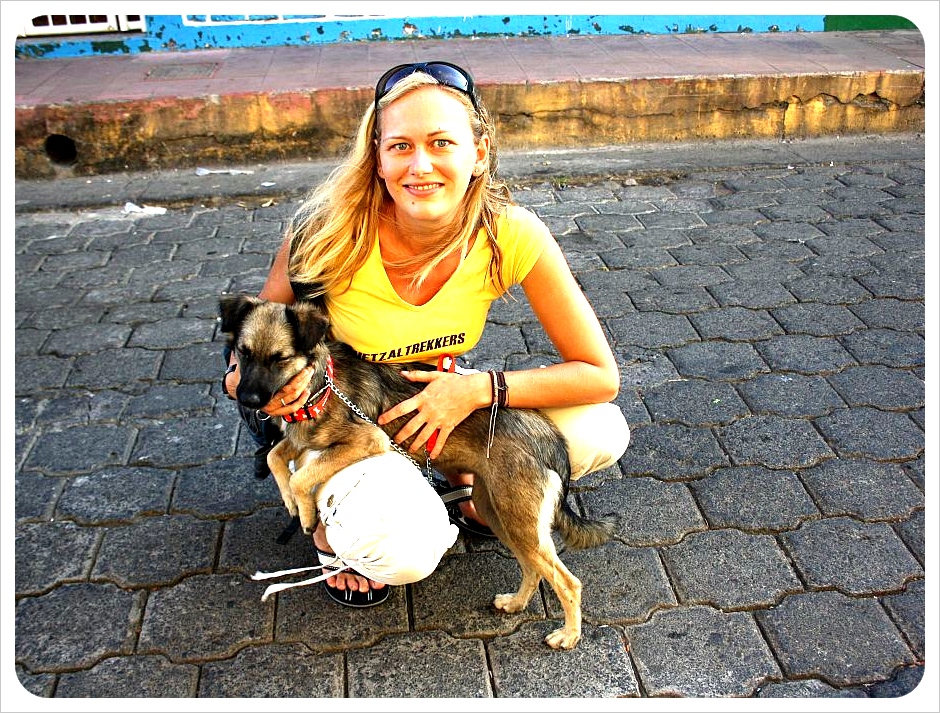 If you have visited Nicaragua and share our love for the country, please add your favorite things in the comments below! 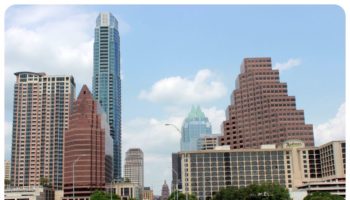