Welcome to our new Sunday series – What I Wonder When I Wander. The motivation behind this new series is simple. We really love providing you guys with first-hand experience, travel tips and hotel recommendations, but the fact is that becoming nomads is truly changing our lives. There are so many questions and observations that come up along the way, and we feel like it is important to share this, too.

This first post is about something that really makes us sick. Water. More specifically, bottled water. Around the world, where access to clean water can be scarce, we have to rely on bottled water if we want to continue to travel, but the number of bottles we go through each year is staggering, and my guilt is getting crazy out of control.

To be honest, I did not even want to start researching for this post, because I already knew what I would find. I knew the facts would infuriate me. And they do.

Way back in August 2010, Dani and I were in the middle of enjoying an amazing speedboat cruise through Sumidero Canyon on the Grijalva river in the Mexican state of Chiapas when suddenly the boat slowed to a near stop. National park workers were strategically placing large logs in such a way so as to create a path for boat traffic through a sea of plastic bottles. Hundreds, no, thousands of plastic bottles had all collected here, washed down from the towns beyond the canyon. Wading through such a massive amount of garbage made a lasting impression (read about our experience here), and is the image that comes to mind each time I open yet another bottle of water.

If I had the choice, I would never drink bottled water again. Hell, at this point bottled water drinkers are the new smokers. It is absurd the way people carry massive water bottles while running errands, as though this was a Sahara, not a city with ample access to food, water and supplies. On a hike, playing sports, sure you need to hydrate. But am I the only one who remembers filling up those green Gatorade sports bottles at water fountains back in the day? When the only bottled water was Evian, or Perrier, and you were being a big fancy pants if you drank that stuff? In fact, bottled water is a manufactured demand – watch this video for a great explanation. The bottom line is, we never needed it, but can no longer imagine life without it.

If I lived in one place, I would buy the right filters and chug tap water all day long. But as a traveler, we can’t exactly saddle up to a sink in India or Guatemala and start gulping away. Oh no. We would just incur the wrath of Montezuma’s revenge or Delhi Belly.We would be too sick to ever really travel. According to these facts, 80% of all illness in the developing world comes from water-borne diseases.

So how many bottles do two nomads really use?

This has meant drinking countless bottles of water, and the guilt is starting to overwhelm us. The two of us together drink, on average, four liters of water per day, or

Assuming we only buy 1.5L bottles, that’s an average of

Being as conscious as possible, we try to buy 5L jugs or re-fill whenever we can, so let’s knock that down to 15.

That’s 780 plastic bottles per year and over 1,560 since the start of our travels.

The image of Sumidero Canyon constantly flashes before our eyes, but the more we travel, the more we witness the way that the world is being buried by piles of trash dominated by plastic bottles. This becomes much scarier when you know that one plastic bottle will take 700 years to biodegrade. 700 years. The damage we are doing now is essentially permanent. Our oceans are filled with plastic trash. Sure, people are trying to do their part, but in the U.S., only 25% of plastic bottles are recycled. And that’s the good news. In places like Cambodia, most recycling is left to the youngest street kids, who go around collecting plastic bottles discarded on the beaches or in the streets. Dani always saved bottles, packed up a backpack filled with them, and practically stalked these little kids to give them all our bottles. 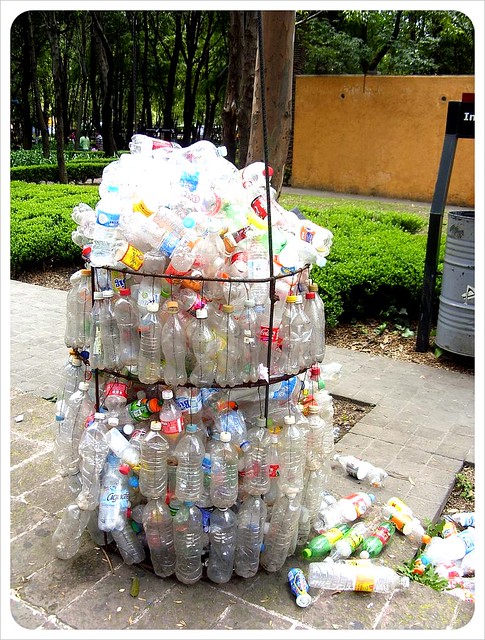 How is this healthier?

Remember Tom Hanks at the end of Castaway downing bottles of water? When we get to Europe or the U.S. after long stints in developing countries, I’m the same, only with my head – or in more refined moments, a glass – under the tap, slurping away. Tap water is more regulated than bottled water, anyway. It is cleaner and cheaper, all of which renders the entire exercise of drinking bottled water totally pointless.

So why is bottled water the second most popular beverage in the U.S.?

The perception is that bottled water is healthier than tap water, but that isn’t even true in places where you might expect it. In many places in Mexico, for example, tap water is perfectly safe to drink, but Mexicans are overly careful, making the country the second largest consumer of bottled water in the world, second only to the U.S. The Thai government now says that the water in Bangkok is entirely safe to drink as well, yet millions of tourists buy bottled water every day.

But the great thing about Thailand, is that the streets are dotted with water machines, which, for just pennies, allow access to clean, filtered water to refill 2L, 5L even 20L jugs at one time. This hugely reduced our plastic consumption – and our guilt. We saw similar machines in Malaysia, but nowhere near the same market penetration. Considering that bottling and shipping water is the least energy efficient method ever used to supply water, why are we not seeing more of these popping up around the world? 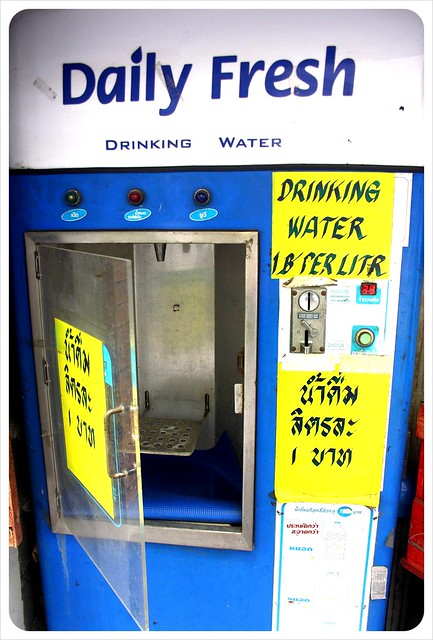 Tourism is not a root cause of this problem, but the industry plays a role in large scale pollution problems with plastic, which then often ends up as trash in the ocean. The head of Cinque Terre National Park in Italy told the media last year that the influx of over 3 million annual tourists means 400,000 water bottles are strewn about per month in high season. Plastic water bottles have since been officially banned there, as well as at the Grand Canyon National Park, where no plastic water bottles are sold within the grounds now.

Hotels and guesthouses often offer free water refills, and some, like Campbell House in Malaysia, and Thai hotels Chaw-ka-Cher resort on Koh Lanta and the Bangkok Tree House all refilled plenty of glass bottles in the room each day so we bought less water on the streets. Many Ritz-Carlton hotels offer water to guests in ‘green’ bottles made of plant-based, biodegradable materials. Whether it is a guesthouse with free water refills or the Ritz Carlton, we are still at the mercy of each individual hotel’s policy, and still have to drink bottled water when out and about each day. 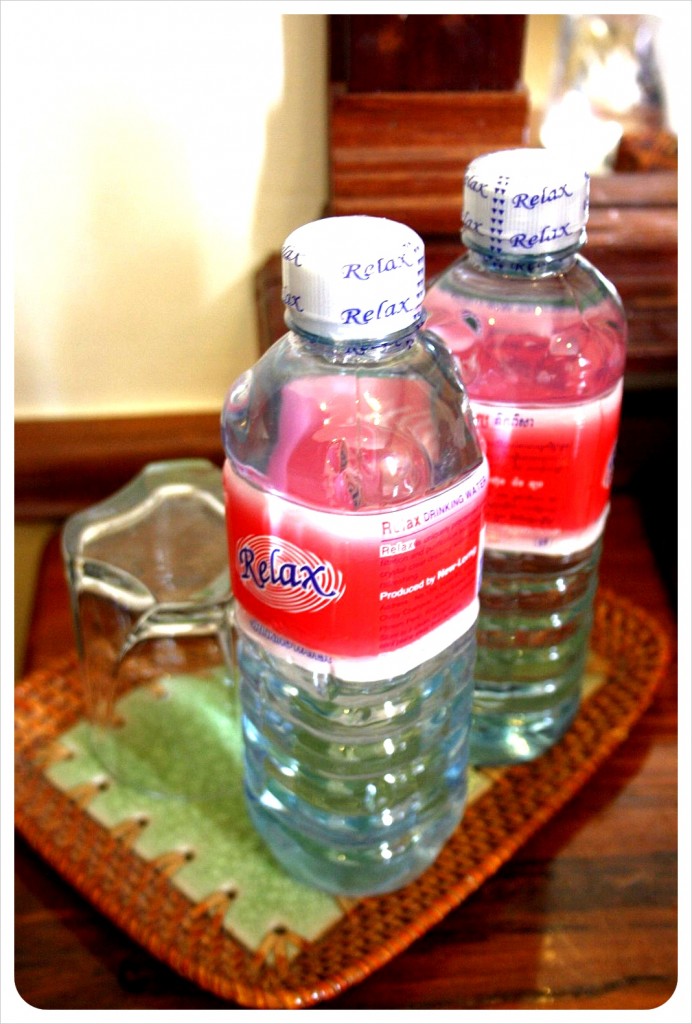 Taking back power over the plastic

I want more control over this issue than that. The grand scale of my active role in this pollution makes me sick. Then I multiply this by the two of us, then by the hundreds, or thousands, of nomads out there not to mention millions of vacationers. My head starts to spin.

Just before our trip to India, our friend Shannon casually asked if we wanted to take her Steripen with us. Apparently Dani had heard of this before, but I was new to the concept. Essentially a SteriPEN is a portable water purification system, and is as small as a (big) pen. It uses UV light to kill the microbes that make you sick. Shannon trusted it enough to use it throughout her travels to India, but this seemed too good to be true, like anti-aging creams. We just didn’t want to take the risk, not in India for the first time. (For her opinion, read Shannon’s full SteriPEN review here .)

But knowing that we are headed to Mexico in a few weeks, I wonder if we should pick up one up to test out. If we could almost entirely cut out our consumption of plastic bottles of water, it would be a dream and at least partially help to calm down this incredible sense of guilt growing in my gut the longer I travel.