We spent two months New York in May and June, but it wasn’t until just after we flew to Europe that we discovered that there are pizza tours in New York! So, obviously, when we came back to the Big Apple last week we had to jump on a tour to find out more about New York style pizza with Scott’s Pizza Tours. No matter how you might imagine a pizza tour, Scott seriously exceeds all your expectations – Scott is so pizza-crazy, we would bet that you will never meet someone so enthusiastic about pizza. We hit four pizza joints in four different boroughs – Harlem, Nolita, Queens and Brooklyn – which we got to by way of our own private yellow school bus! But this tour wasn’t just about the pizza. Scott took us back into the kitchens and showed us different types of ovens, what temperature they are cooked at,the differences between certain cheeses and sauces and all about New York style pizza and its history, too.

Scott also switches up his locations every tour (these special yellow bus tours run only on Sunday, he does walking tours a couple times a week as well). That means that if we decide to hit up another tour upon our return to New York in October – we’d get totally different locations and even more pizza knowledge. In case you’re curious, this pizza, one of our favorites, was from Lombardi’s – one of New York’s most famous pizza joints. 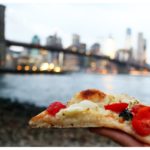 Polaroid of the week: A winter day in New York City
Click here to cancel reply.

Pizza tours, that is way too much!

When we were in NY and in Manhattan we had the chance to try a delicious pizza, for only $1/slice :) NY is for sure the right place to eat pizza +Mison Thomas in Cairo Egypt.

Totally agree - a $1 slice is perfectly fine!! But we were on the hunt for the very best slice in NYC :) I just love me some pizza!! :D

BEST pizza in the world!!!!