Nashville was just the jumping-off point for a road trip through Tennessee and North Carolina – a trip I dubbed the ‘Beer and Mountains’ adventure because those were the two reoccurring things of the trip: Mountain hikes, scenic mountain road drives, viewpoints and micro breweries.

From Nashville, we headed east and it didn’t take long until the flatlands turned into rolling hills and eventually into mountains: We had reached the Great Smoky Mountains. The Blue Ridge Parkway (for views and hikes) and Asheville (for all the craft beer – did you know Asheville had the highest number of breweries per capita in the US?) were the two reasons we added North Carolina to what was originally supposed to be a Tennessee road trip.

I’d driven parts of the Blue Ridge Parkway years ago, but back then we were on a tight schedule and didn’t have time to stop for more than one tiny hike along the way, so this time I wanted to see more than just some viewpoints along the way.

And I am glad I got to drive through this part of North Carolina again! The Blue Ridge Parkway, which traverses Virginia and North Carolina for 469 miles (755 km), winding through the Blue Ridge Mountains, part of the Appalachian Mountain range, is known as one of America’s Most Scenic Road Trips and America’s most visited National Park for a reason. We managed to go on four hikes along the Blue Ridge Parkway, all of which wowed me with beautiful lush green forest scenery and striking vistas.

My favorite hike was the Black Balsam Knob hike, which is part of the popular 30.1-mile Art Loeb trail. We followed the trail up to the mountain bald, as they are calling the summits here when they are covered in grass or bush instead of the dense forest you see at lower elevations. We walked a narrow path on the bald, surrounded by lower mountain peaks and green woodlands as far as the eye could see. There were plenty of wild blueberries and blackberries along the trail, making for a delicious snack, provided by nature. The 360 degree panoramic vistas were spectacular – with every turn the path took, a new breathtaking view came into sight. We could’ve happily spent all day on this trail, but the road was calling, and we eventually had to turn around to head west again. We would loop back to Tennessee via the scenic route through Nantahala National Forest, ending the day in Chattanooga, where more hiking trails were waiting for us. 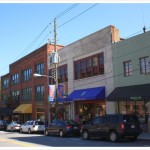 Polaroid Of The Week: Hiking the dramatic cliffs of Gertrude’s Nose
Click here to cancel reply.

Polaroid Of The Week: Hiking the dramatic cliffs of Gertrude's Nose | GlobetrotterGirls

[…] batteries, and I was on a mission to clear my head with another great hike, after all the fantastic hikes I did in Tennessee last […]