Swimming with the pigs was the main reason why I wanted to visit the Bahamas. But what’s the Pig Beach tour like? It entailed so much more than just swimming with pigs that I wanted to give you a detailed rundown what to expect when you book a Swimming Pigs Tour. From snorkeling above the wreck of a crashed airplane to swimming into a hidden sea cave to exploring a secluded beach filled with iguanas – our Pig Beach Excursion was packed with so many unforgettable moments!

Most of the tours to Pig Beach are structured similarly, no matter if you’re flying down to for the day from Nassau or if you’re based on Staniel Cay. The only tours that are different are the speedboat tours from Nassau – scroll down to the end for further information and what to look out for when booking a Pig Beach Tour.

My tour was booked through 3 N’s Vacation Services, and I can’t speak highly enough of them. Our captain, Kuenson, was so attentive to every single person on the boat, always making sure that we had everything we needed, got exactly the photos we wanted, and helped the people who weren’t good swimmers. 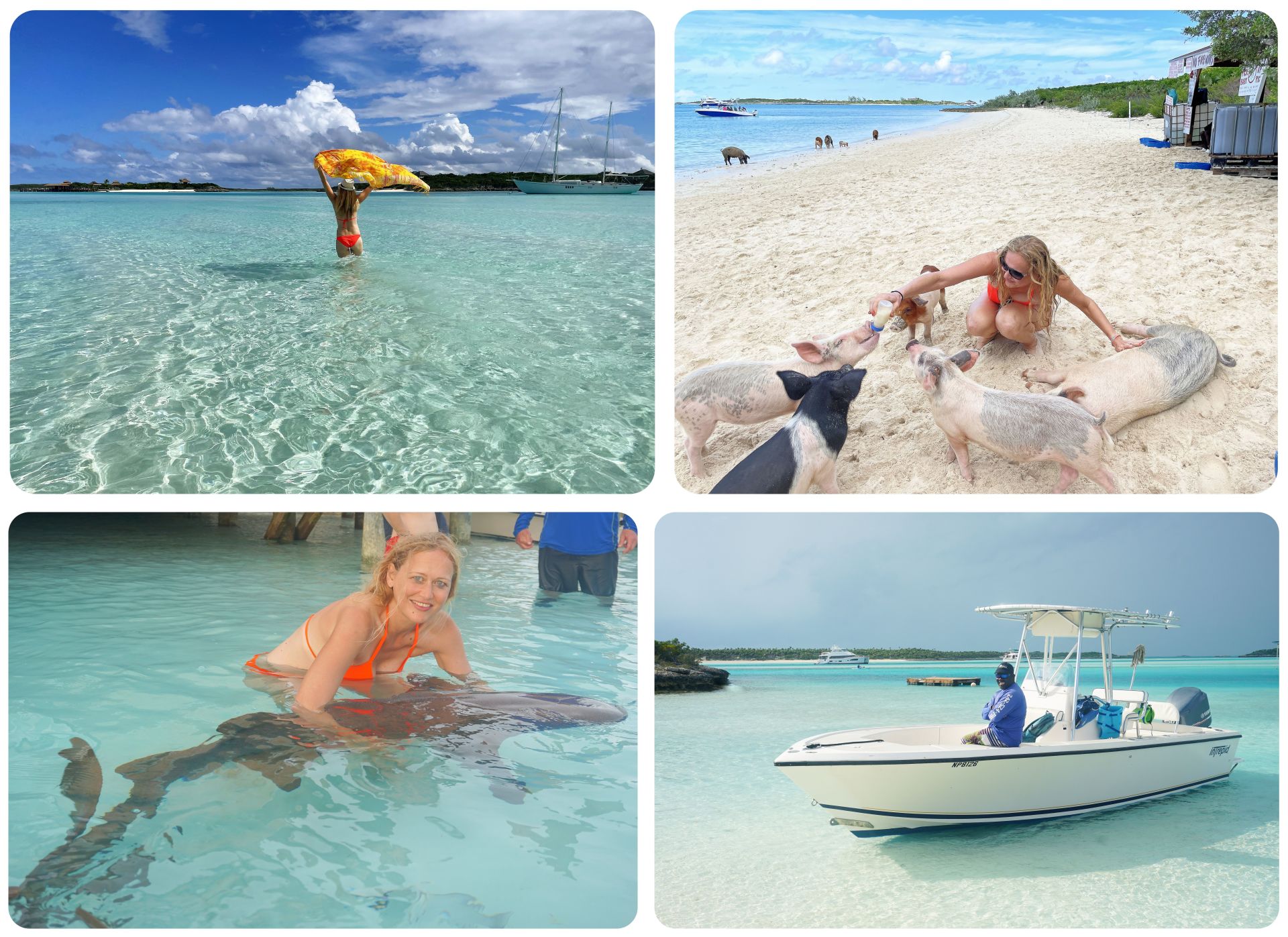 What To Expect On A Pig Beach Tour

Because the tours to Pig Beach include so many more activities than just swimming with the pigs, the excursions start early. Since I was already staying on Staniel Cay, I was able to sleep in though. Everyone else on my tour flew in from Nassau and had a 6am start – I had a relaxing morning on the deck of my villa at Embrace Resort until I heard the plane land on the nearby airstrip and made my way over there to meet my fellow travelers. Two American couples joined me on the boat, which was docked just a short walk from the airport. Within fifteen minutes of the plane landing, we were all on board and on the way to our first stop: Thunderball Grotto. It didn’t take us long to get there – Thunderball Grotto is only a five-minute boat ride from Staniel Cay.

Thunderball Grotto became famous as a filming location for the 1965 James Bond movie Thunderball. When we anchored the boat, we had no idea what to expect, because from the outside, all we could see was a massive rock peaking out of the shallow water. We followed Captain Kuenson to a tiny hole in the rocks – the entrance to the grotto. We would have never been able to spot the small entrance without him! We slowly swam inside, trying not to hit the rocks, and not even a minute later we found ourselves in a stunning sea cave. 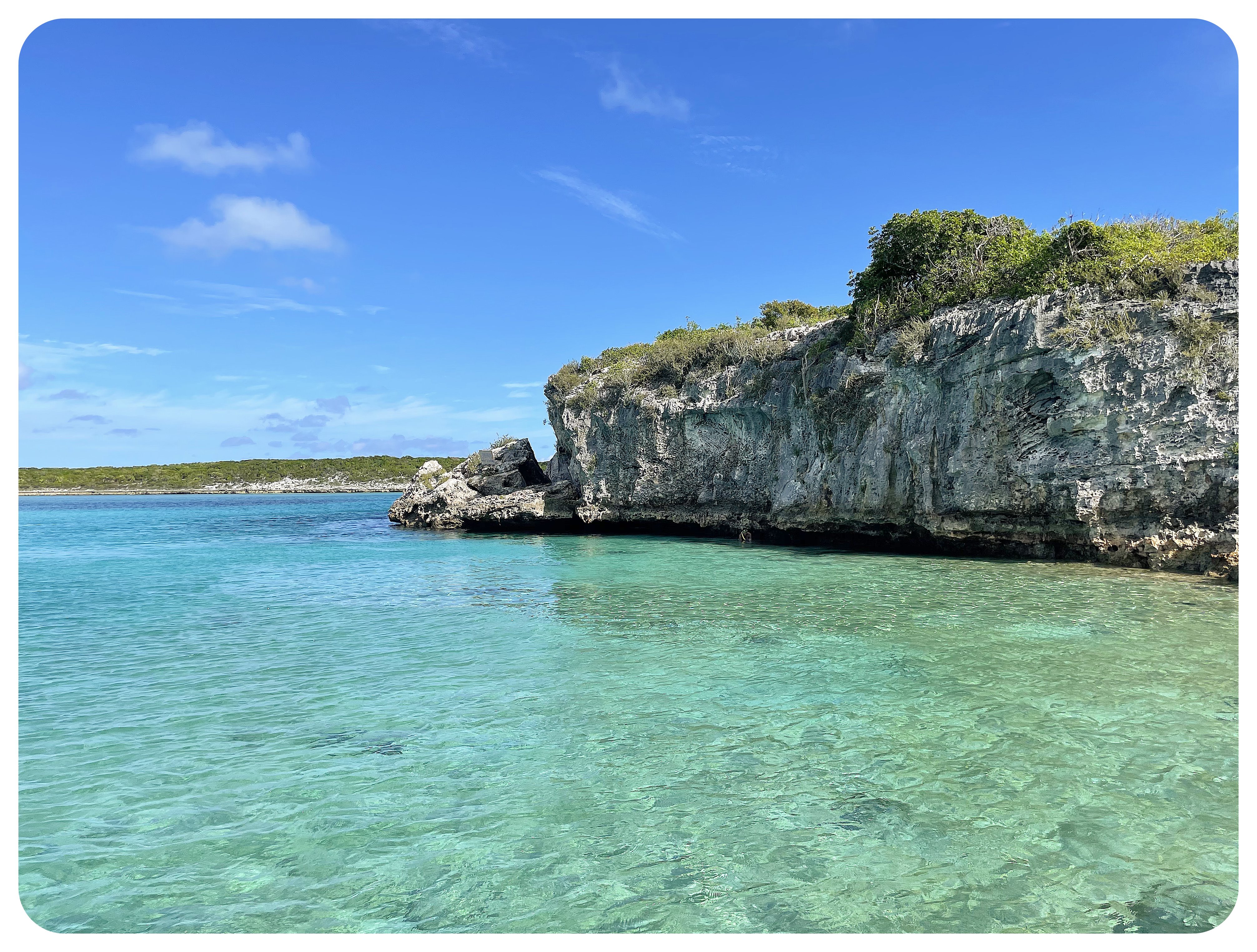 Who would think that there’s an incredible sea cave behind this rock?

The water in the cave is full of fish, and we were able to snorkel with them for a while, admiring the beautiful underwater rock formations and the stalactites that were hanging down from the ceiling of the cave. There are three round holes in the cave ceiling, and depending on the weather and the time of day, the sunlight creates stunning sun beams all the way down to the bottom of the grotto. Captain Kuenson asked me if I wanted to swim out of a different cave entrance with him, and he showed me another tiny hole in the rock through which we exited the grotto. Our trip was off to a great start – this cave excursion had my adrenaline pumping! 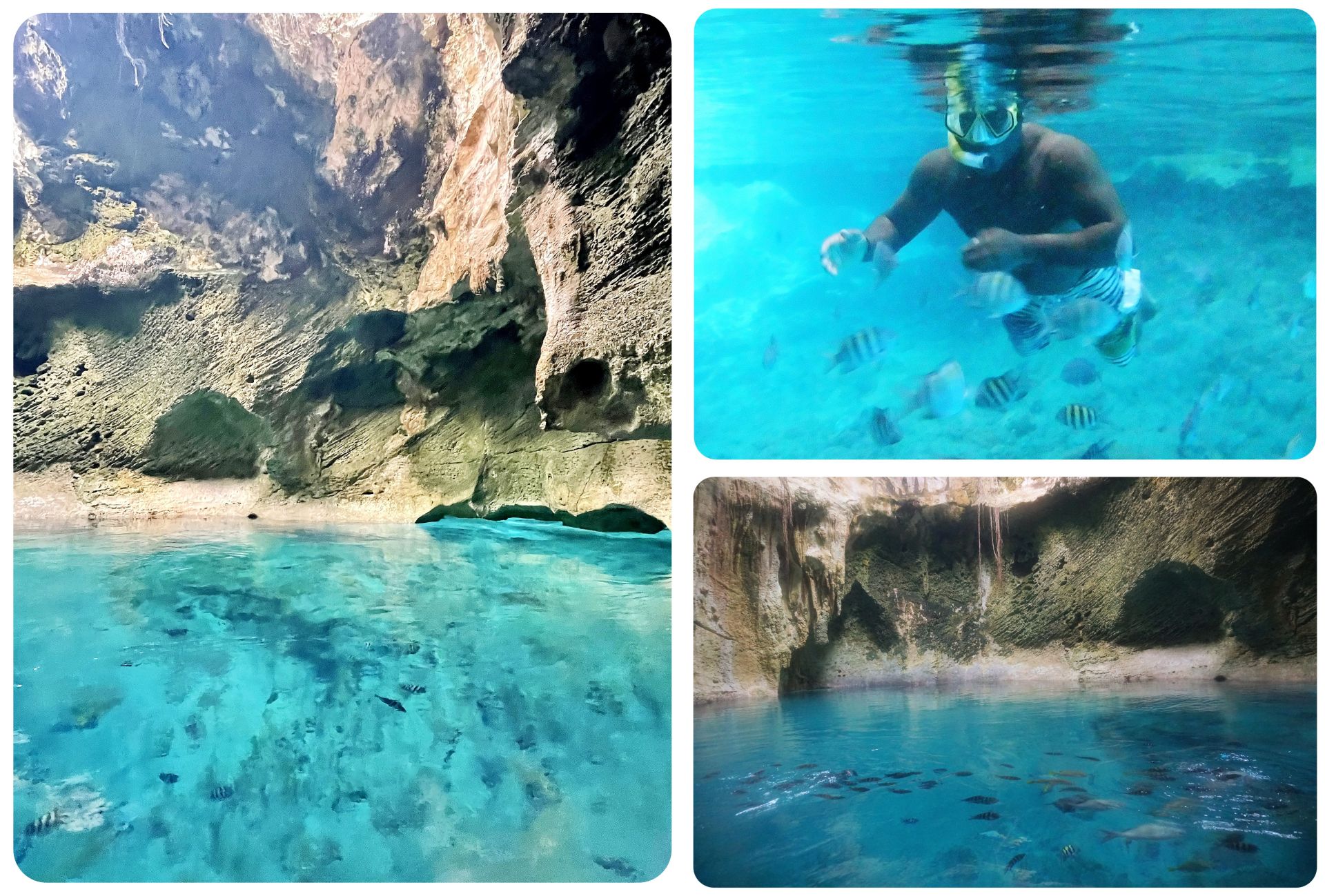 Back on the boat, we didn’t even have time to dry off, because only five minutes later, we reached Stop Number 2: Pig Beach.

Swimming with the pigs in Pig Beach

Pig Beach is a small beach on Big Mayor Cay, which is a small uninhabited island – uninhabited except for 30 or 40 pigs. This was what we were all were most excited for, and it didn’t disappoint. We spent some time frolicking with the pigs in the sand, we took photos, and were even invited to bottle feed some of the piglets. It turned out that the piggies really love belly rubs and I spent most of the time on the beach sitting in the sand rubbing the pigs’ bellies. I wasn’t sure if anything could top this stop – only the second one of the day! – but Captain Kuenson assured me that there was still a lot to come, and to keep my camera ready. Sure enough, it didn’t take long and we arrived at the most scenic sandbar I’d ever seen: Pipe Creek Sand Bar. 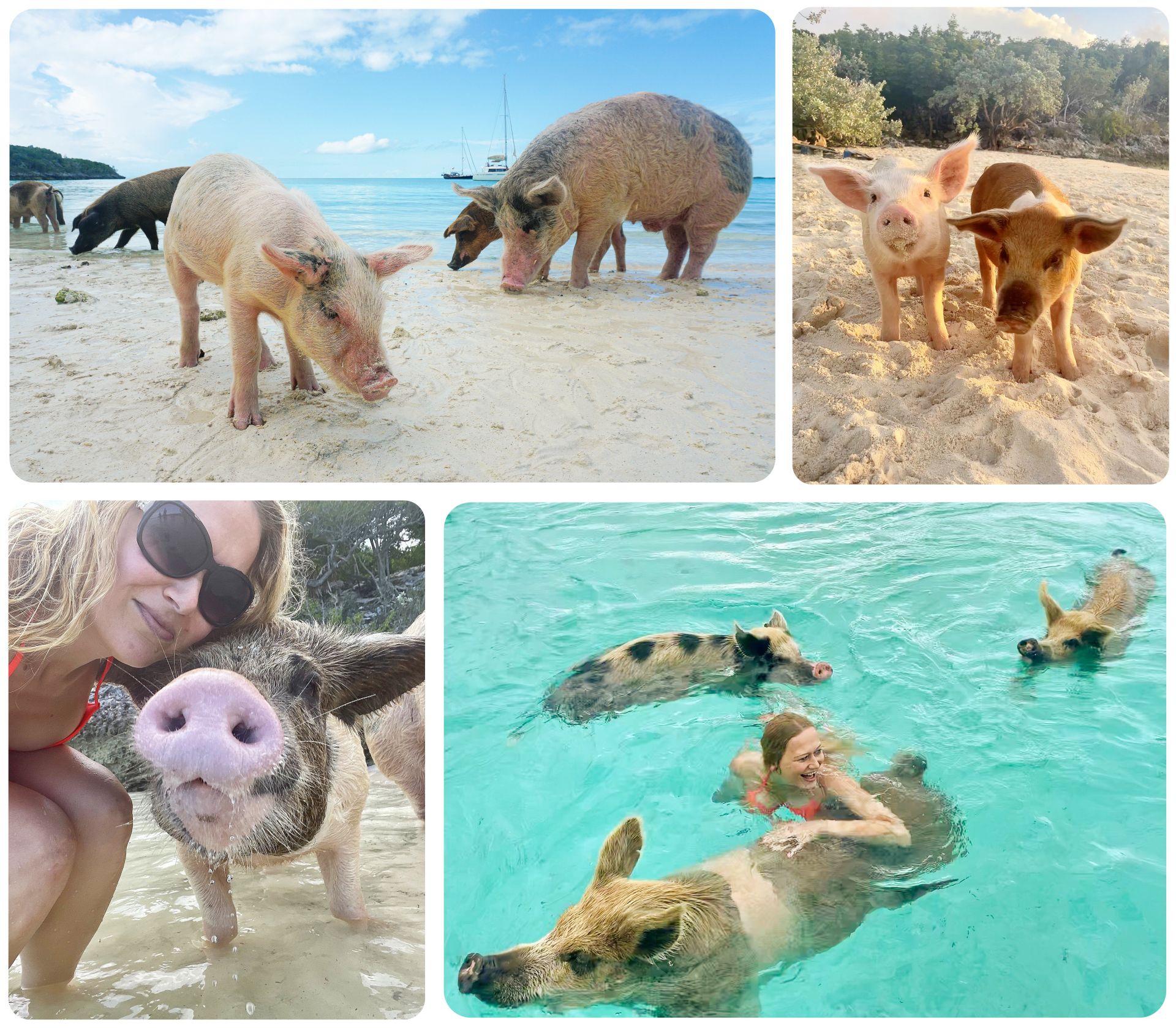 There’s no shortage of beautiful sand bars in the Exumas, and every Pig Beach Tour includes a stop at one of them. Ours couldn’t have been more perfect: white, powdery sand so bright that it almost hurt our eyes, surrounded by shallow water so clear that it was hard to believe that this was a real place. This is where you can get the most stunning Bahamas photos to post on your Instagram to make all your friends jealous (bring props!). Our Captain made sure that everyone in our group got all the pictures we wanted, and there was time to go for a swim. Most of the sand bars in this area are completely under water during high tide, and because of that, they look completely untouched every day when they emerge during low tide. 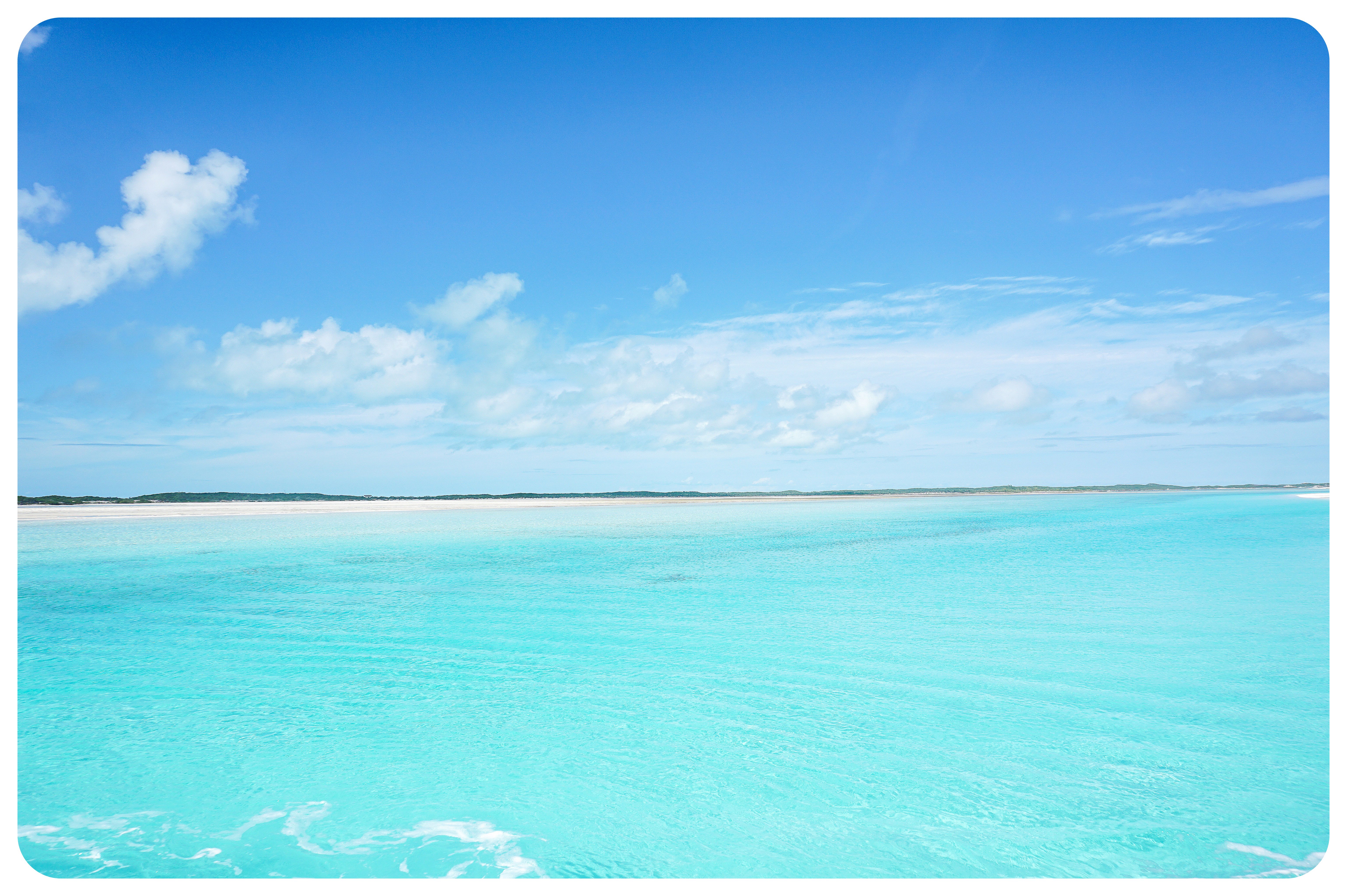 Because our next boat ride would be a little bit longer, Captain Kuenson got out some snacks for us when we climbed back into the boat. My tour with 3 N’s Vacation Services included sweet and savory snacks as well as beer and soft drinks. After leaving the sand bar, I was once again not sure if anything could top this beautiful stop, but when we pulled up at Compass Cay, we found out that we would be swimming with sharks here. 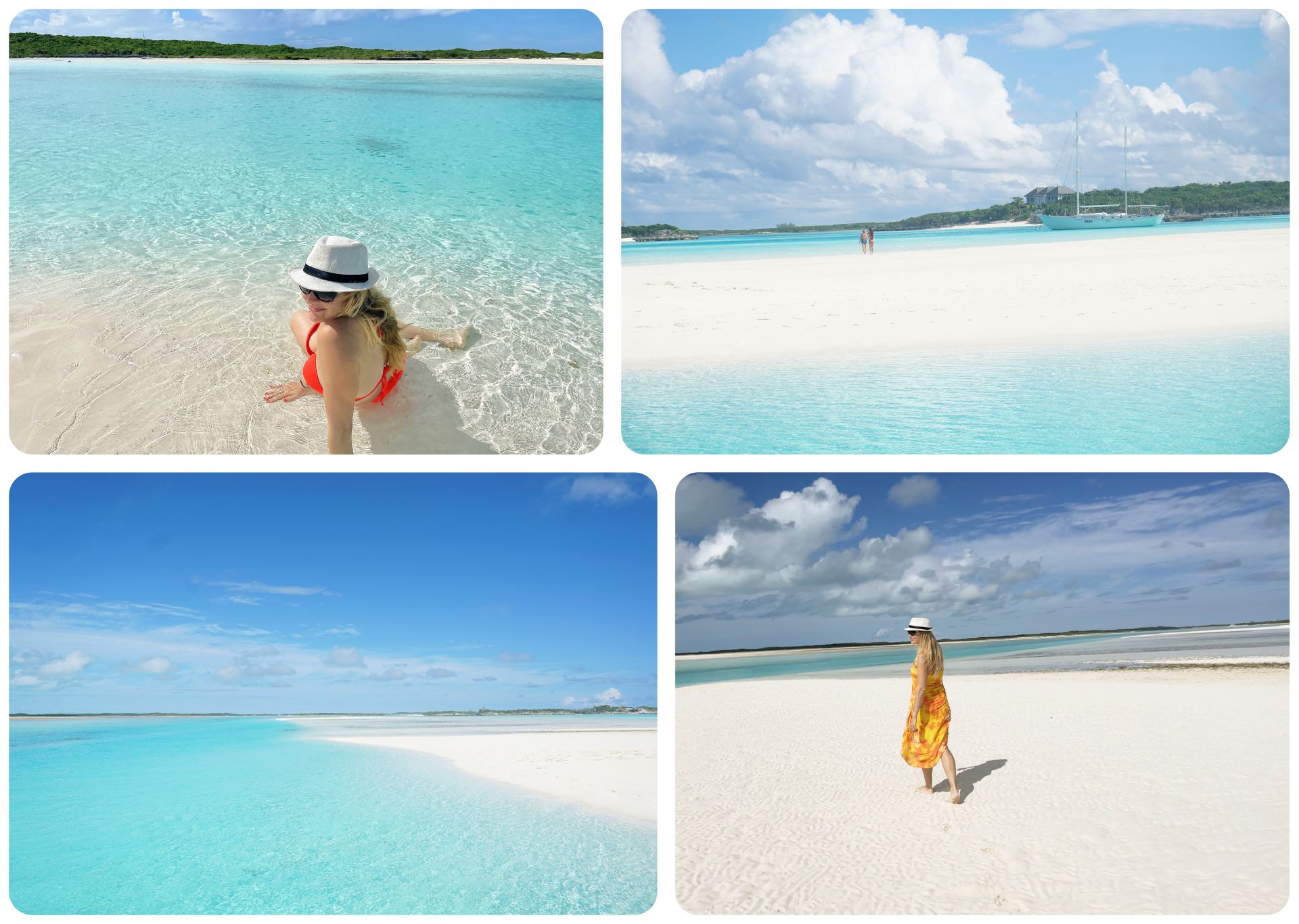 This stop is not for the faint of heart: you literally jump from the boat into shark-infested waters. But no worries, these sharks are nurse sharks, known to be very friendly and harmless, unless they’re triggered by something (but even then they wouldn’t do much damage). Someone used the term “pet sharks” to describe them, and that’s pretty fitting: they’re used to being fed scraps by the fishermen when they return to the marina, which is why they hang around the piers on Compass Cay.

The sharks range in size – some were small, around 3 feet long, but others were seven feet long and definitely looked a bit intimidating. The sharks didn’t give us any reason to be scared though: they were all playful and kept swimming circles around us, waiting to be fed some scraps.

After this exhilarating experience, we were ready for a break, so the longer boat ride back to Staniel Cay was welcome. We would take a break there and have lunch on the island (included in our tour) before heading to our next stop: a sunken plane wreck. 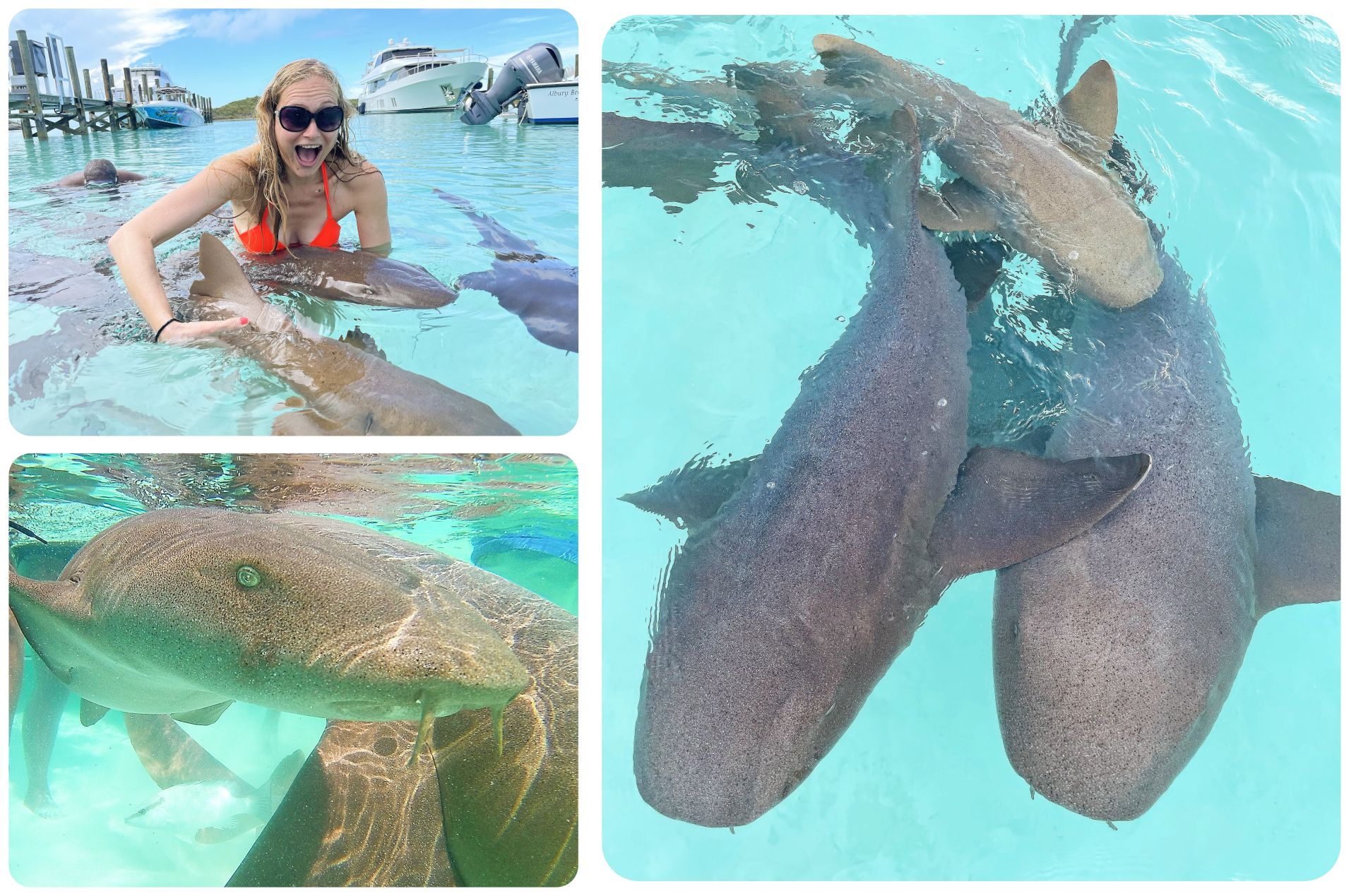 Snorkeling Above A Sunken Plane Wreck

The plane wreck we stopped at is sitting in such shallow water that it is one of the most accessible plane wrecks in the Caribbean. The water is so shallow that you don’t even need to swim – you can simply walk and peek at the wreck through your goggles. The plane was used by drug traffickers under Pablo Escobar, bringing drugs from Colombia to Miami via the Bahamas, and crashed just off the shore of Staniel Cay in the 1970s. It’s not often that you can get so close to a wreck without having to dive, so this was another awesome stop. 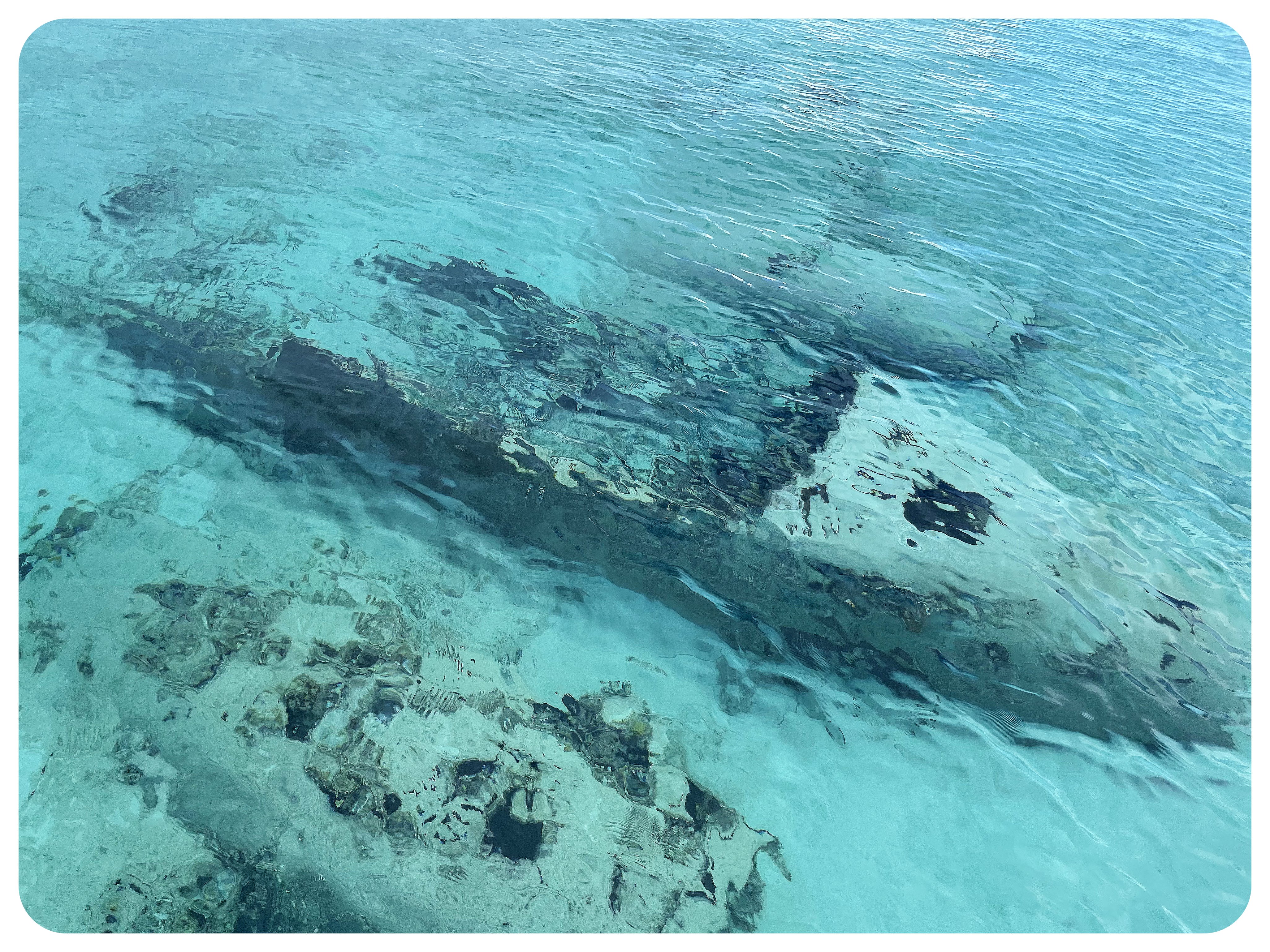 After the plane wreck, we had one stop left on our tour: a beach filled with iguanas.

The reason for our visit to Bitter Guana Cay? To spend time with iguanas! The Bahamian Rock Iguanas, who live on only a couple of Bahamian islands, are an endangered species, and it is estimated that only 5,000 of them are left. On Bitter Guana Cay, they are plentiful though, and we were greeted by dozens of the colorful reptiles when our boat anchored at the deserted beach. A few iguanas were hanging out right on the sand, others were lurking behind some bushes. They were not as welcoming as the pigs who came running at us as soon as we descended upon their beach, but I also wouldn’t call them unfriendly. They kept a safe distance and observe us from afar. 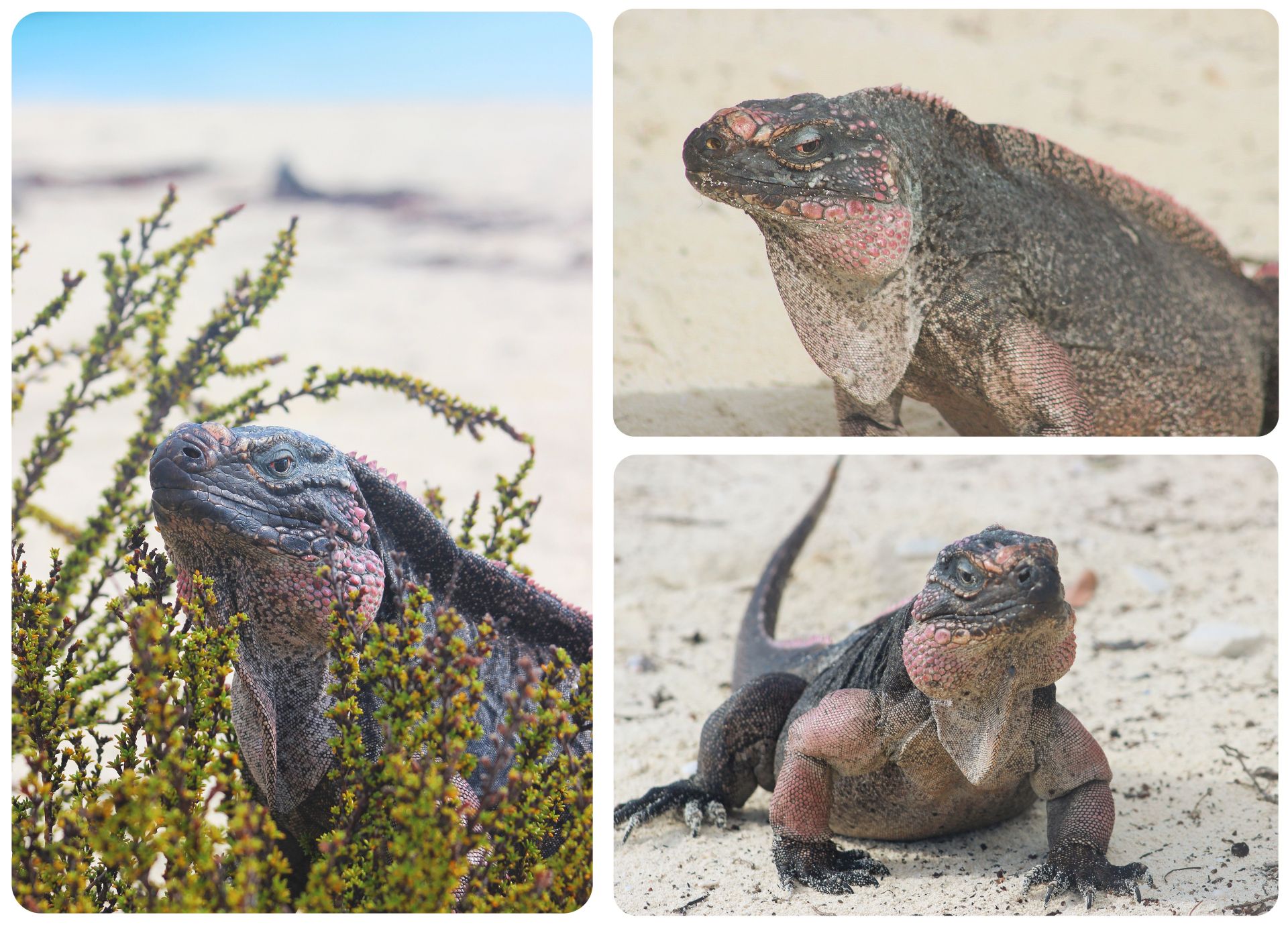 While we were strolling down the beach, which we had all to ourselves, we also saw a big stingray in the water, and a couple of starfish. It is amazing to think that this pristine beach is not overrun with people! Once we were back on the boat, we were served a cold beer by Captain Kuenson for our last boat ride of the day: the ride back to Staniel Cay. While we were gliding through the azure blue water, I thought about all the fantastic experiences we’ve had: meeting the famous swimming pigs, hanging out with sharks, snorkeling in a cave, and seeing some picture-perfect Caribbean islands.. that’s more than most people experience on their entire vacation, and we fit it all in one day. 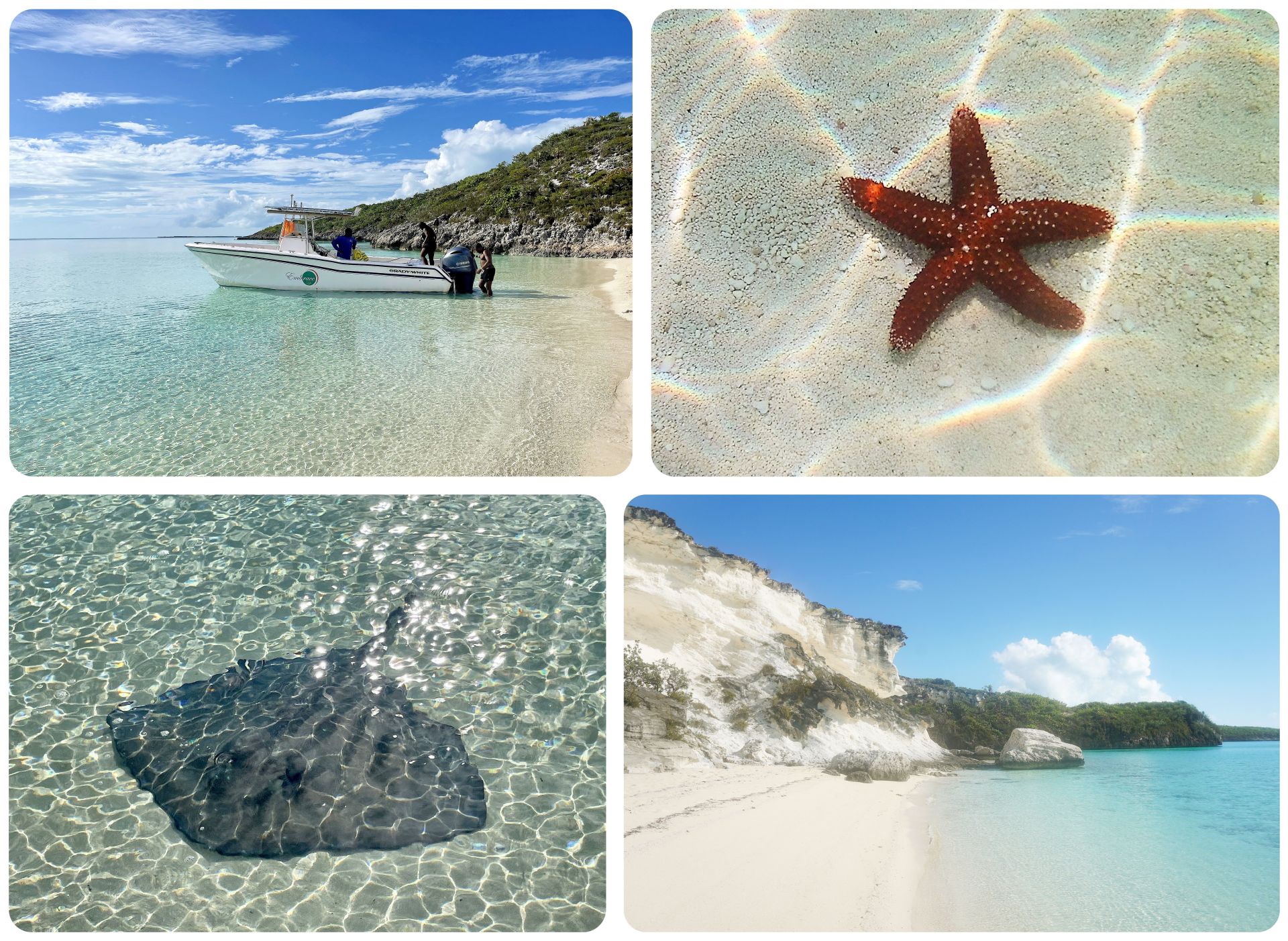 The tour I went on with Staniel Cay Vacations is the standard tour sold by most of the tour operators that offer Pig Beach Tours. You can also book this Pig Beach Tour from Nassau. The itinerary may vary slightly, depending on weather conditions and the company you go with, and if you’re taking a speedboat tour from Nassau or a tour from Staniel Cay. I talk in more detail about the differences between these tours and how much they cost in this article:

In my tour included were: snorkeling equipment, towels, snacks, soft drinks and beer, all entrance fees and taxes, hotel / airport transfers, and an awesome guide who doubled as our photographer (don’t forget to tip your guide!).

Staniel Cay Vacations also offers private tours, which are customizable, suited to your interests. I went on another tour with them that included snorkeling with sea turtles on a small island south of Black Point Island. Four of the world’s seven sea turtle species can be found in the Bahamas, and we swam with Green Sea Turtles, which was an amazing experience. I’ve swum with sea turtles in quite a few countries, but on this trip, there was one turtle that was incredibly friendly and let me swim alongside it for a long time. It was not afraid of us at all! This was definitely one of the best experiences I’ve had swimming with turtles. 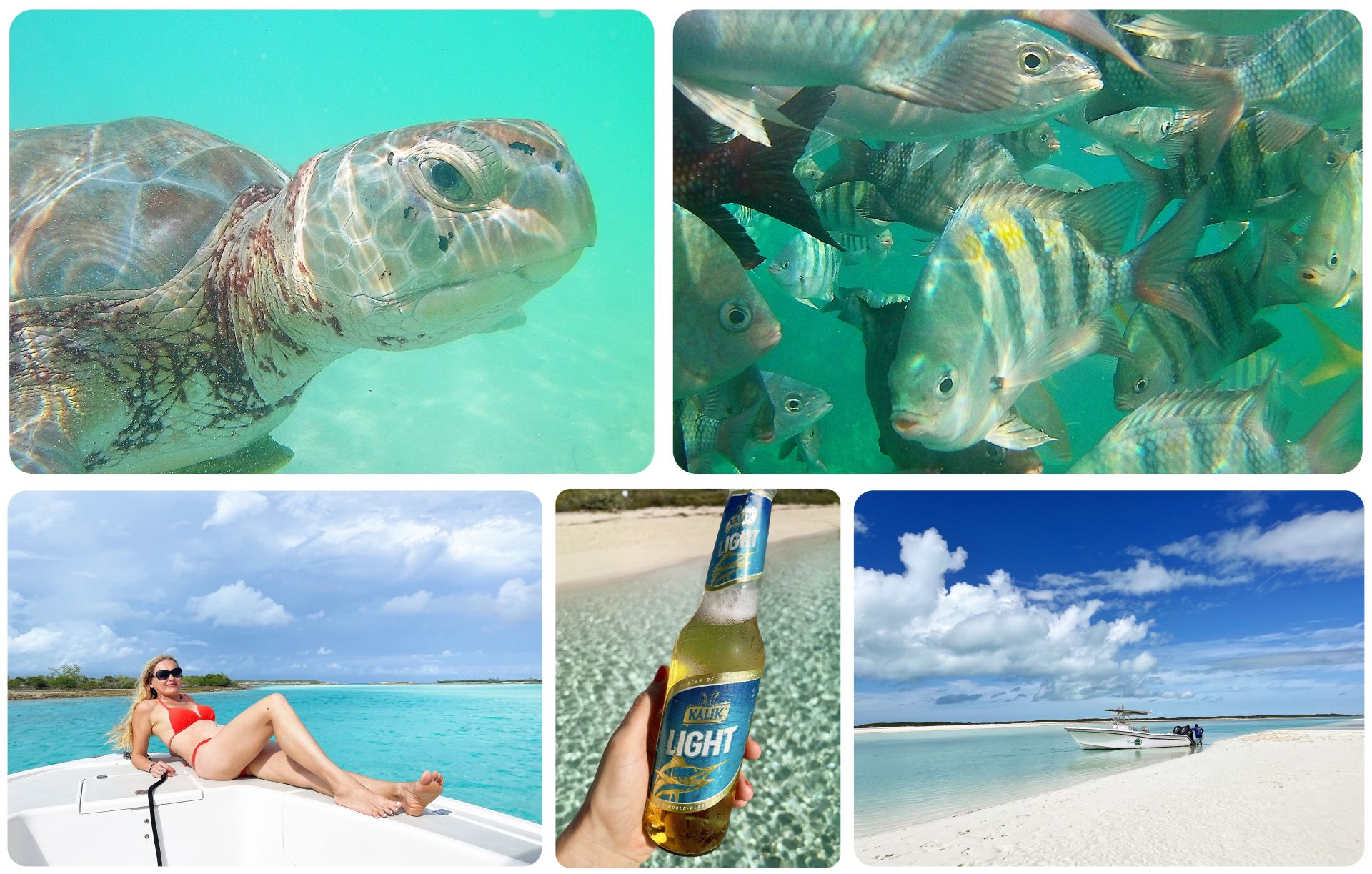 On the same tour, we also visited the Exuma Cays Land and Sea National Park, an ecological preserve and wildlife refuge. Fishing is prohibited in the entire park, and it is home to mangrove forests, the Rocky Dundas cave system, and a Sea Aquarium. We anchored in Warderick Wells to see the skeleton of a 52’ sperm whale – an impressive sight. Sadly, the whale died because it swallowed so much plastic trash.. the tragic reality of today’s world and the plastic garbage in our oceans.

The Sea Aquarium was also part of that tour, a small snorkeling site near a reef that was named “sea aquarium” because it attracts so many colorful fish and marine life that it literally feels like you’re swimming in an aquarium when you’re snorkeling there. That’s where my underwater camera’s battery died because I took so many videos of all the tropical fish!

If you have special requests – some people want to include the underwater piano, which makes for a great photo opp – I recommend booking a private tour, so that you can customize the places you’d like to stop at. Where To Stay In Staniel Cay: Embrace Resort 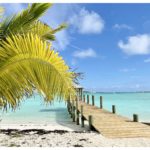