**Too lazy to read about our llama trek? Scroll down to the bottom for the video!**

I had been relaxing after our gourmet picnic lunch down by the Rio Grande when I realized I hadn’t seen Dani in a while. I ran back to the clearing where we had tied up the llamas, figuring she would be petting or feeding them, but they were all chomping hungrily at the leaves after our trek down to the river. No humans were in sight. 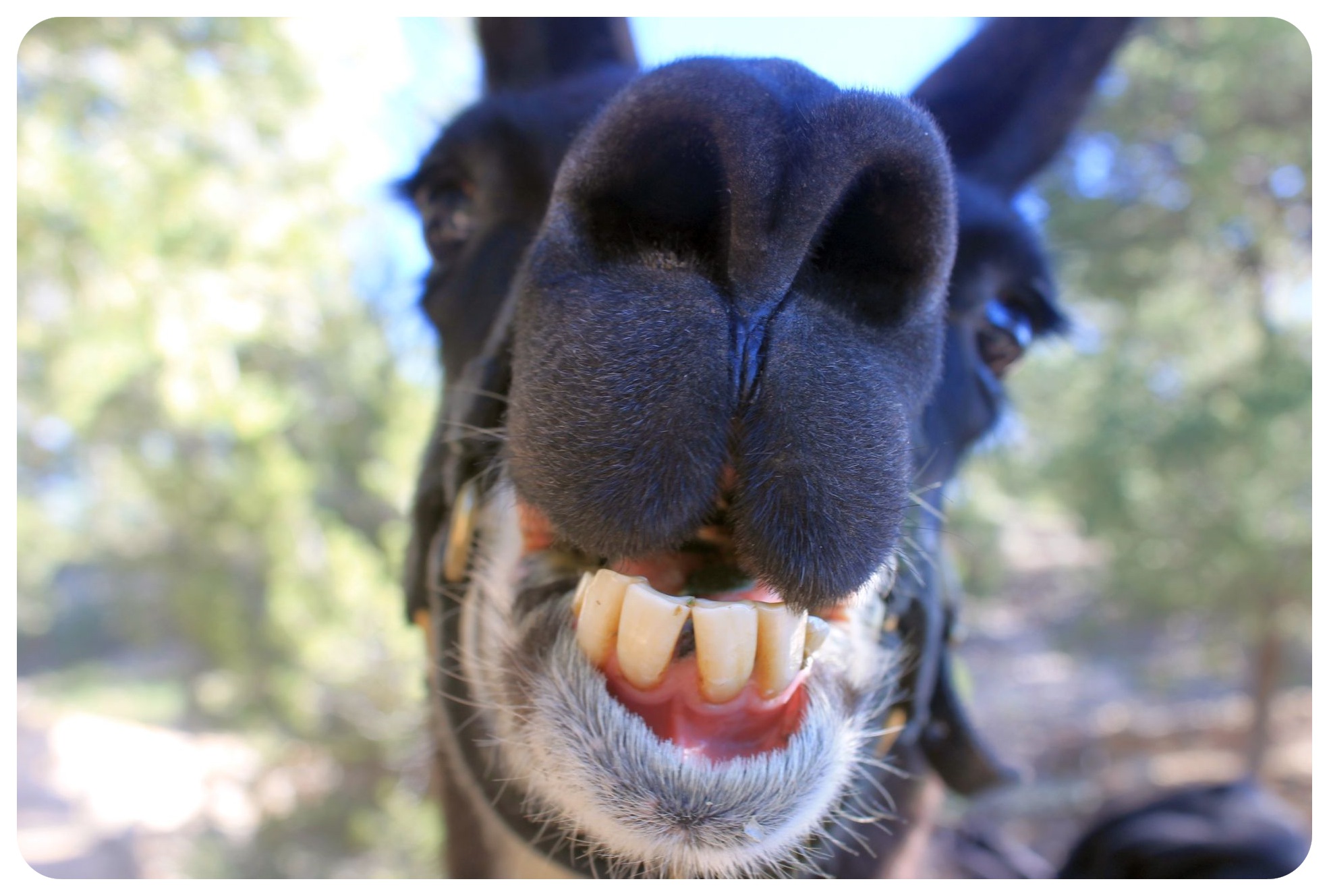 Maybe she had gone to take pictures, I thought, so I followed the thin dirt trail away from our little lunch spot down river and ran into the other couple that was llama trekking with us out here in the Carson National Forest.

“Have you seen Dani,” I asked.

Intrigued, I continued the way they had come and found Dani not ten feet from a family of big horn sheep munching their way past her through the long grasses of the Carson National Forest. 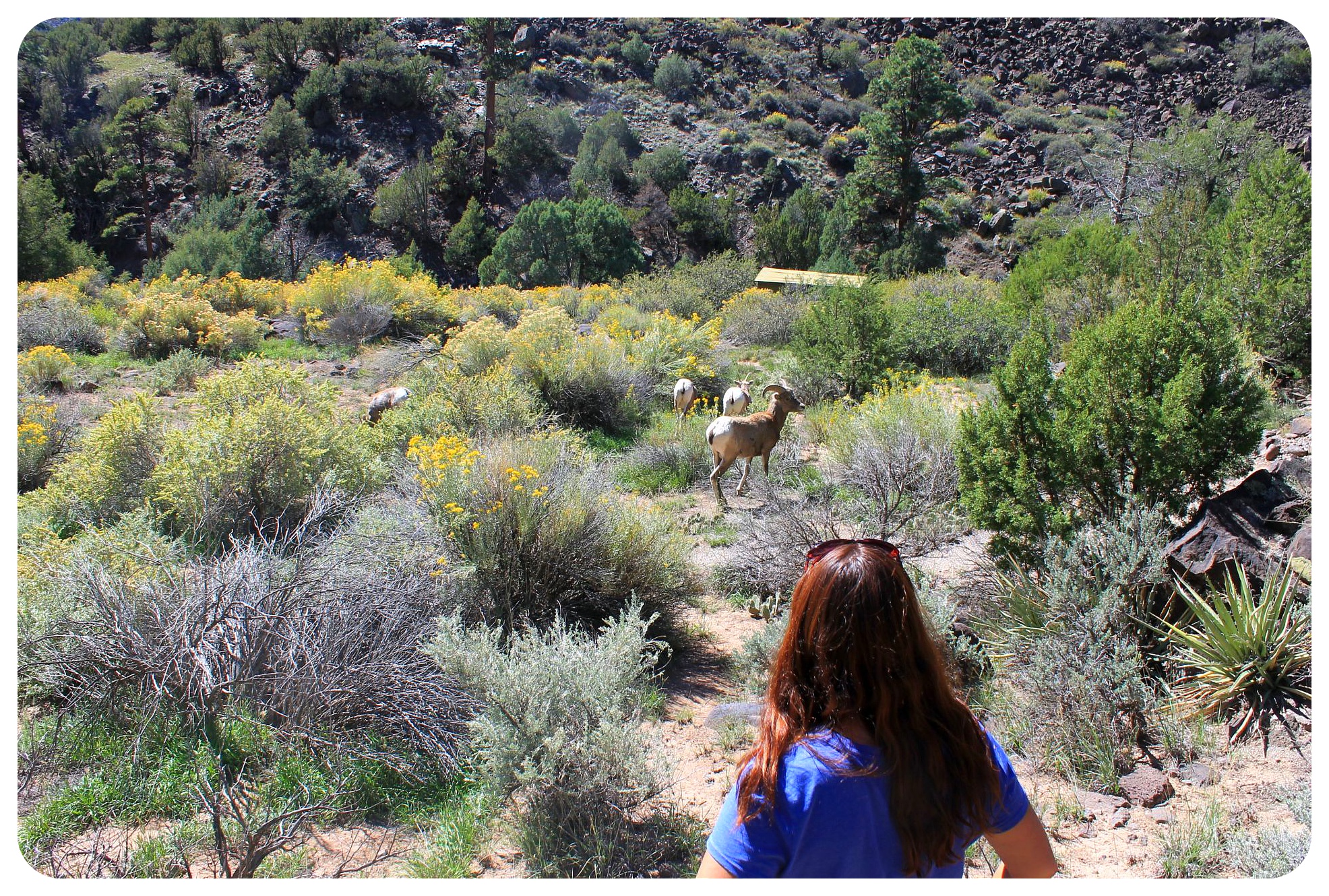 “I saw Picchu (one of our four llamas) staring off into the distance,” Dani explained in a whisper.

“I followed his gaze and saw the sheep on the boulders. None of the llamas seemed scared, so I snuck them over here to get some photos.” 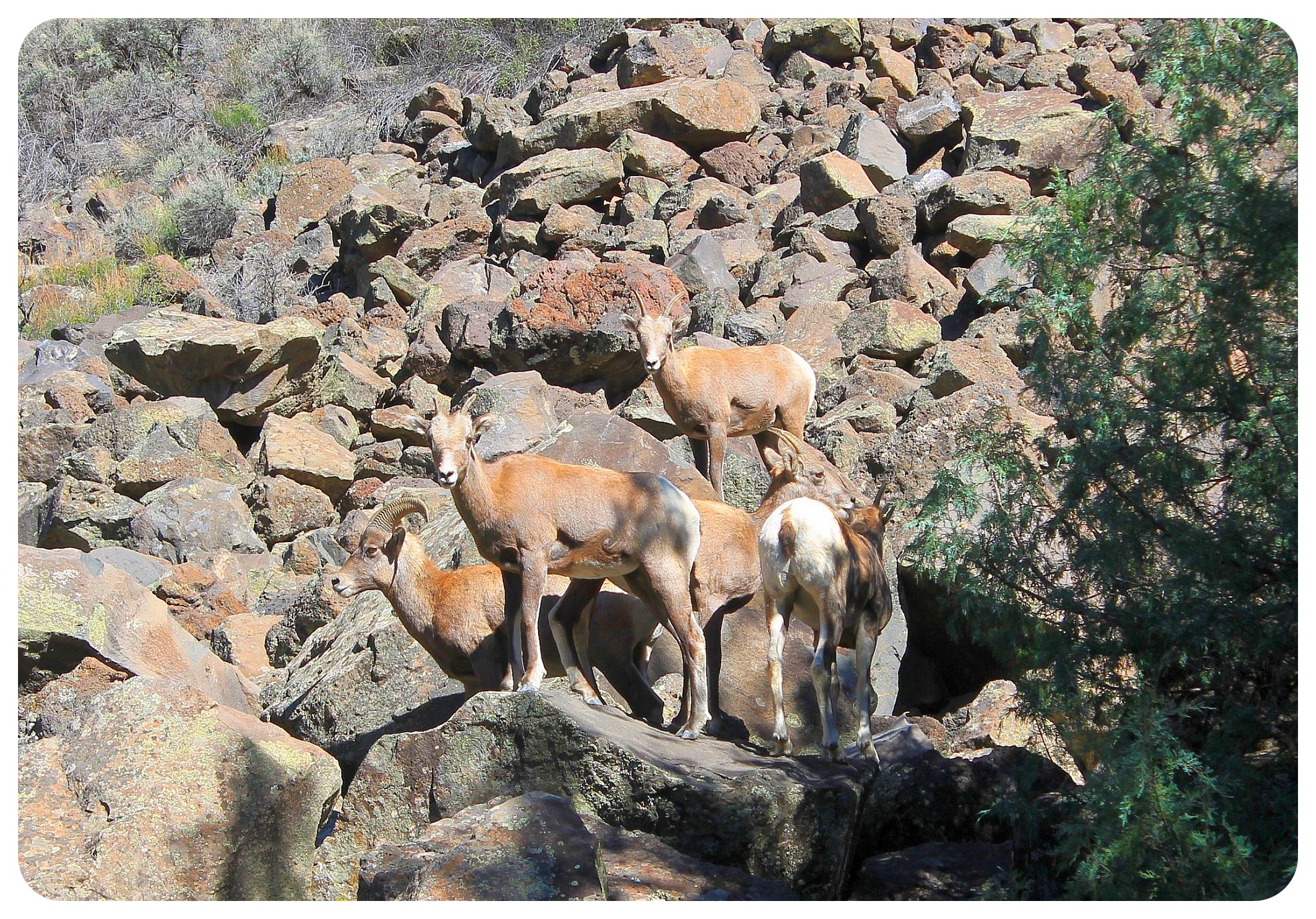 She’s a brave one, Dani is. If I saw a group of unfamiliar animals with giant horns I’d likely not go near them, at least not without Stuart, our guide and owner of Wild Earth Llama Adventures. But because Dani could sense that they didn’t pose a threat, she was able to spend a while almost completely alone with the herd of sheep, taking photos with the nothing more than the bright sun burning down and the sound of the Rio Grande rushing by in the distance. 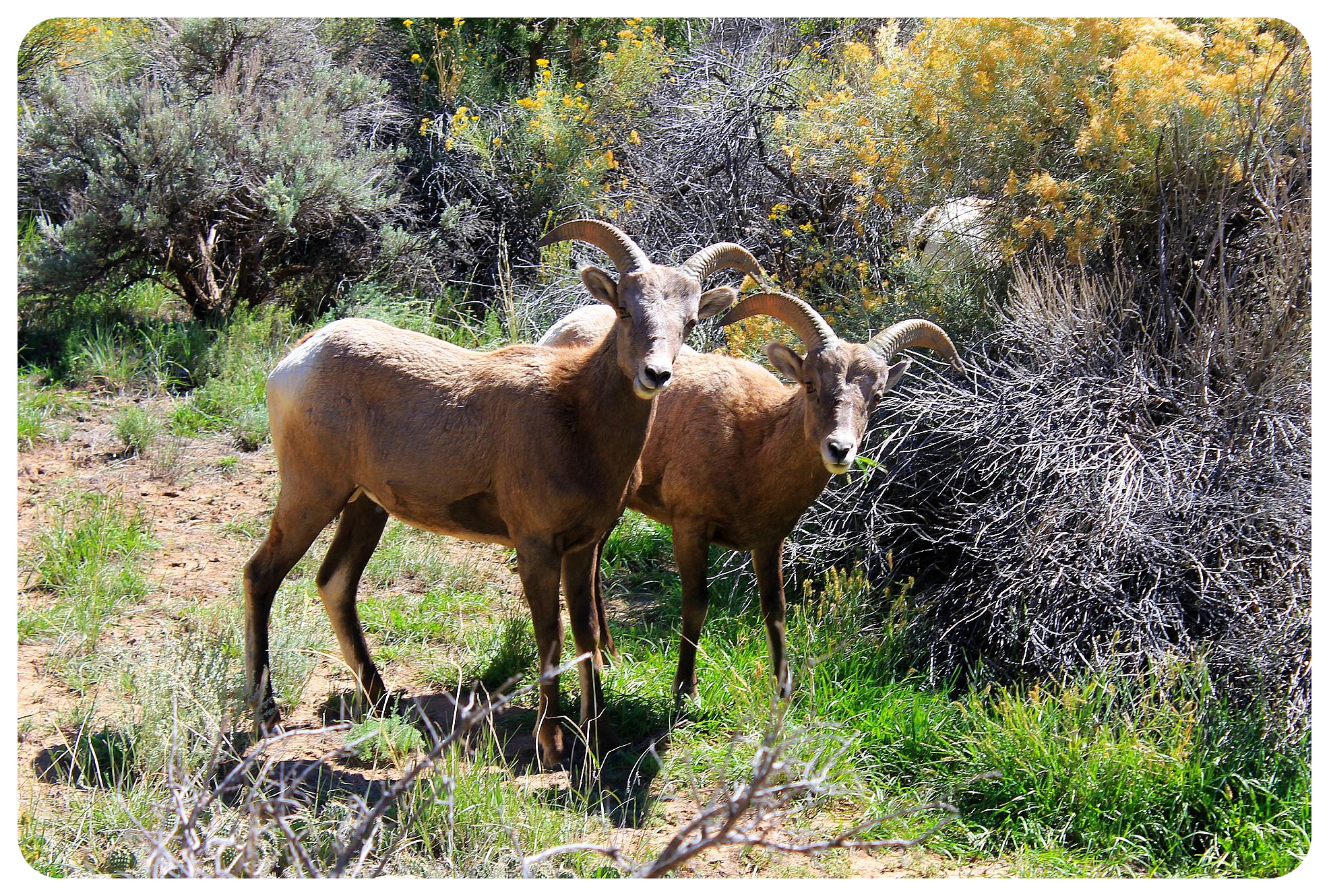 When we returned to the llamas, Stuart explained that he had been part of the crew that helped reintroduce bighorn sheep into the area and had yet to see them in this area for himself. He was so excited to catch a glimpse of them with us that day. 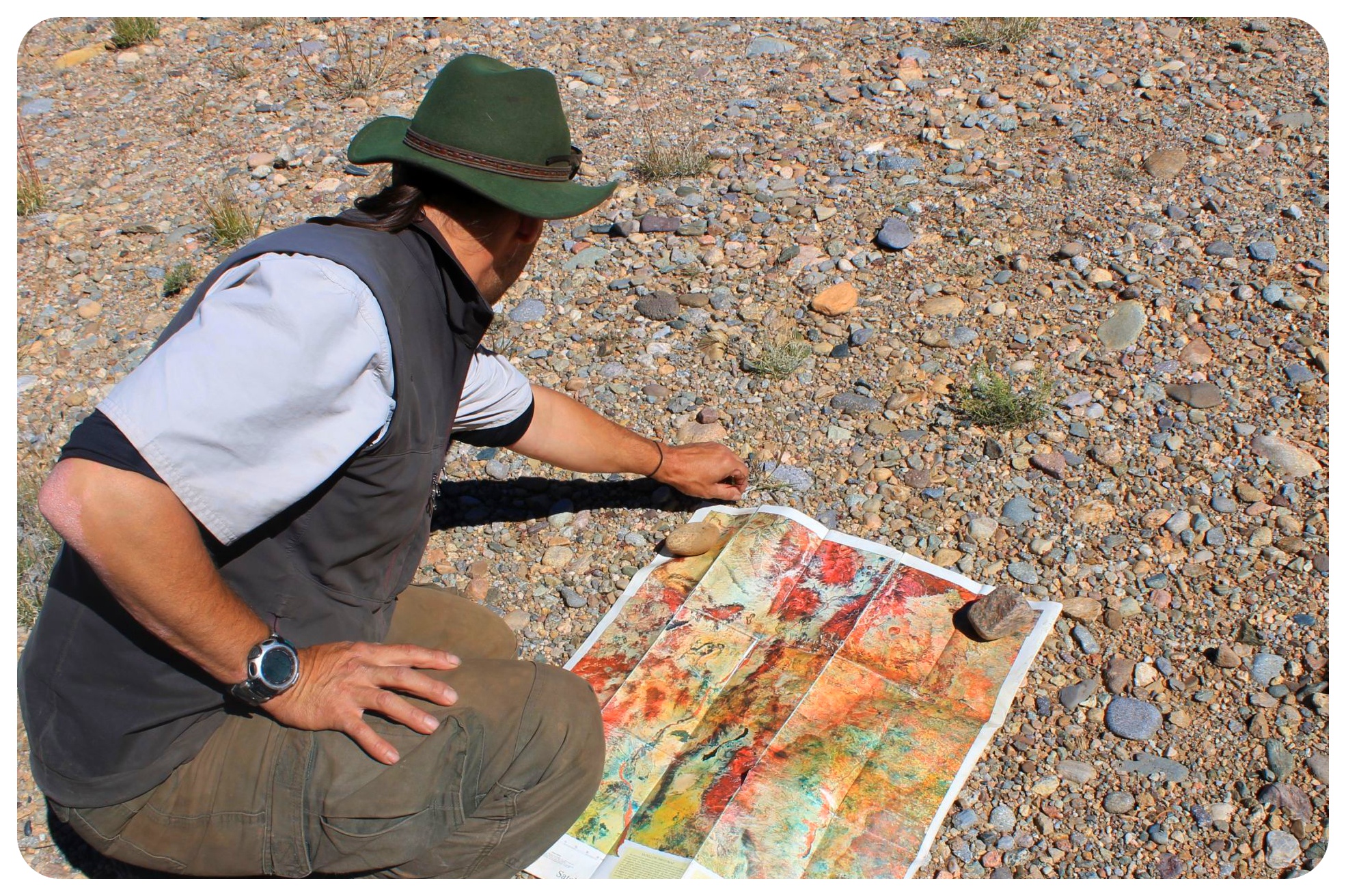 That’s the thing about Stuart Wilde. From the minute we met him earlier that morning, you could just feel his connection to this area and how much he belongs out here. You would never guess that this gentle wilderness expert, forager and rescuer of llamas had been born and raised in New York City! 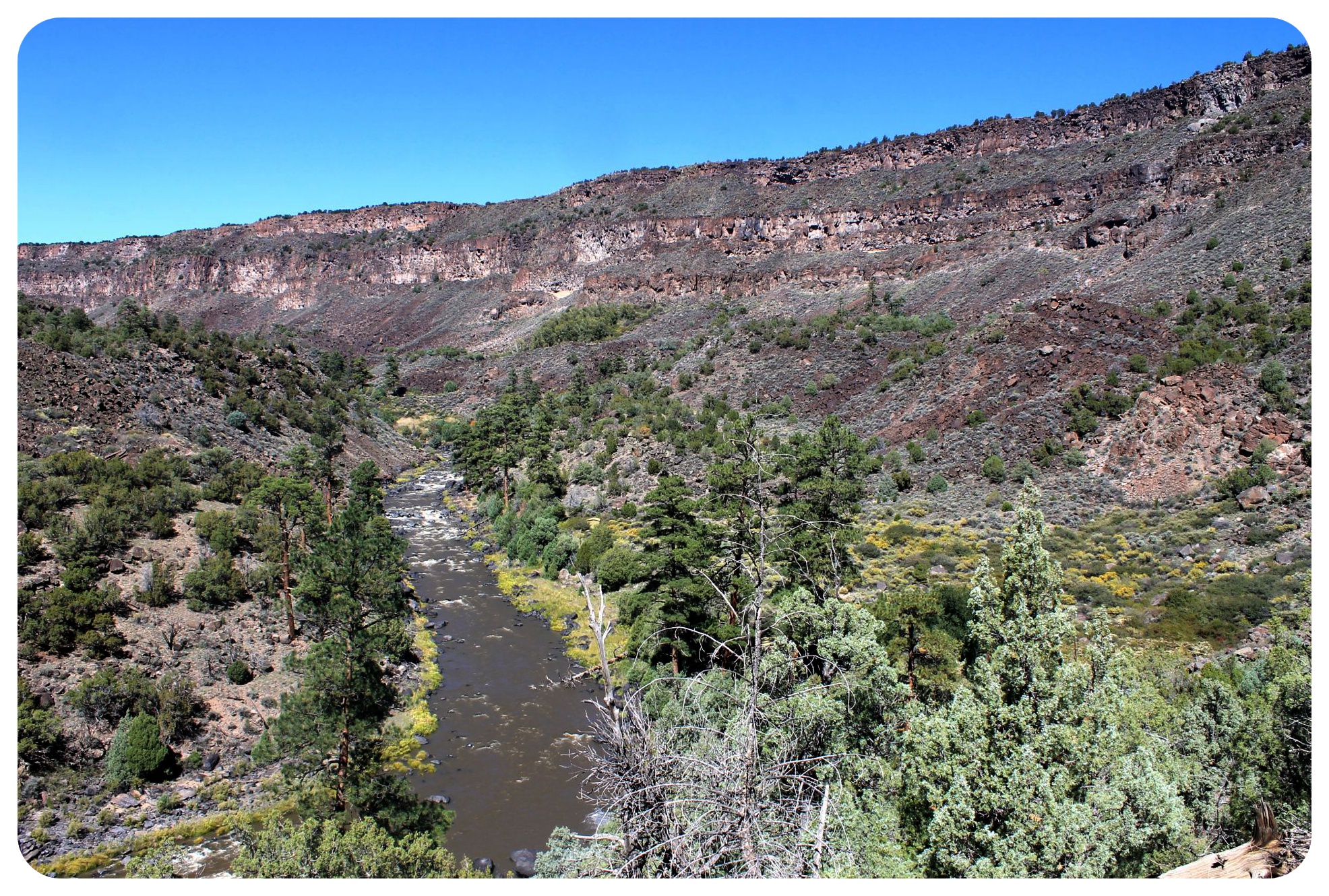 What Stuart and the Wilde family do to save the llamas is a truly incredible story. Throughout the southwest, people get their hands on llamas for a variety of reasons. But, as Stuart explained, llamas are not the cuddly, cute pets that some people might expect. By the time Wild Earth is called in to come rescue them, the llamas are often in need of a shearing, medical care and socialization with both people and the other llamas. The trekking itself requires 16 llamas at most, but there are close to 40 llamas at the ranch at any time – a serious challenge but one Stuart handles with grace and positivity. 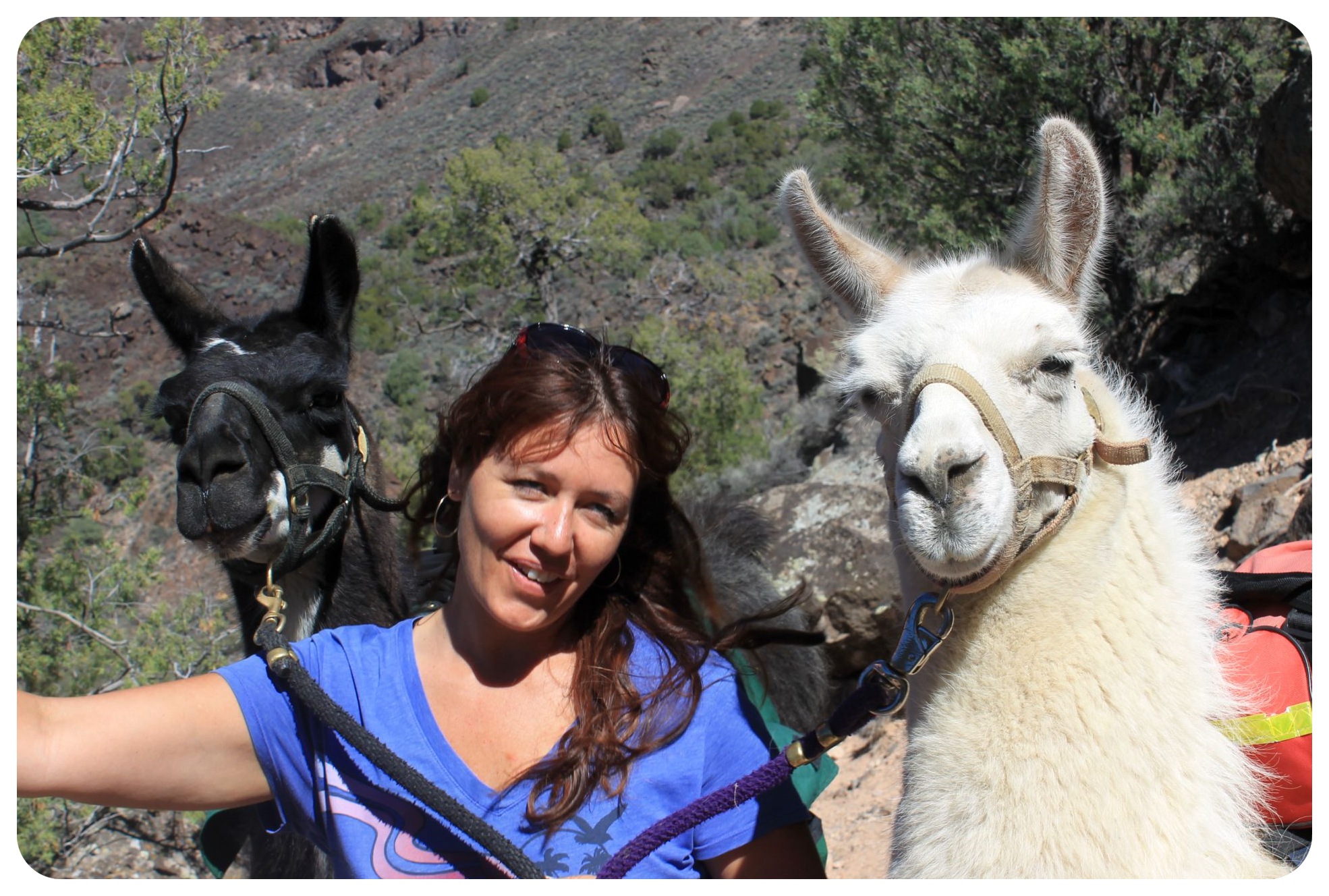 That’s part of what makes the trekking with him so special. The day hike we did can be done faster and essentially for free without trekking with llamas. But there are so many incredible moments we would have missed out on. For one, spending the day out there in the wilderness with an actual wilderness expert brought the whole forest to life for us. Stuart was plucking fresh herbs and mint for us to try and had me grab a couple handfuls of fresh cress from the bottom of a little babbling brook to put on our sandwiches at our picnic (a huge, all organic spread he sets up right down by the water). 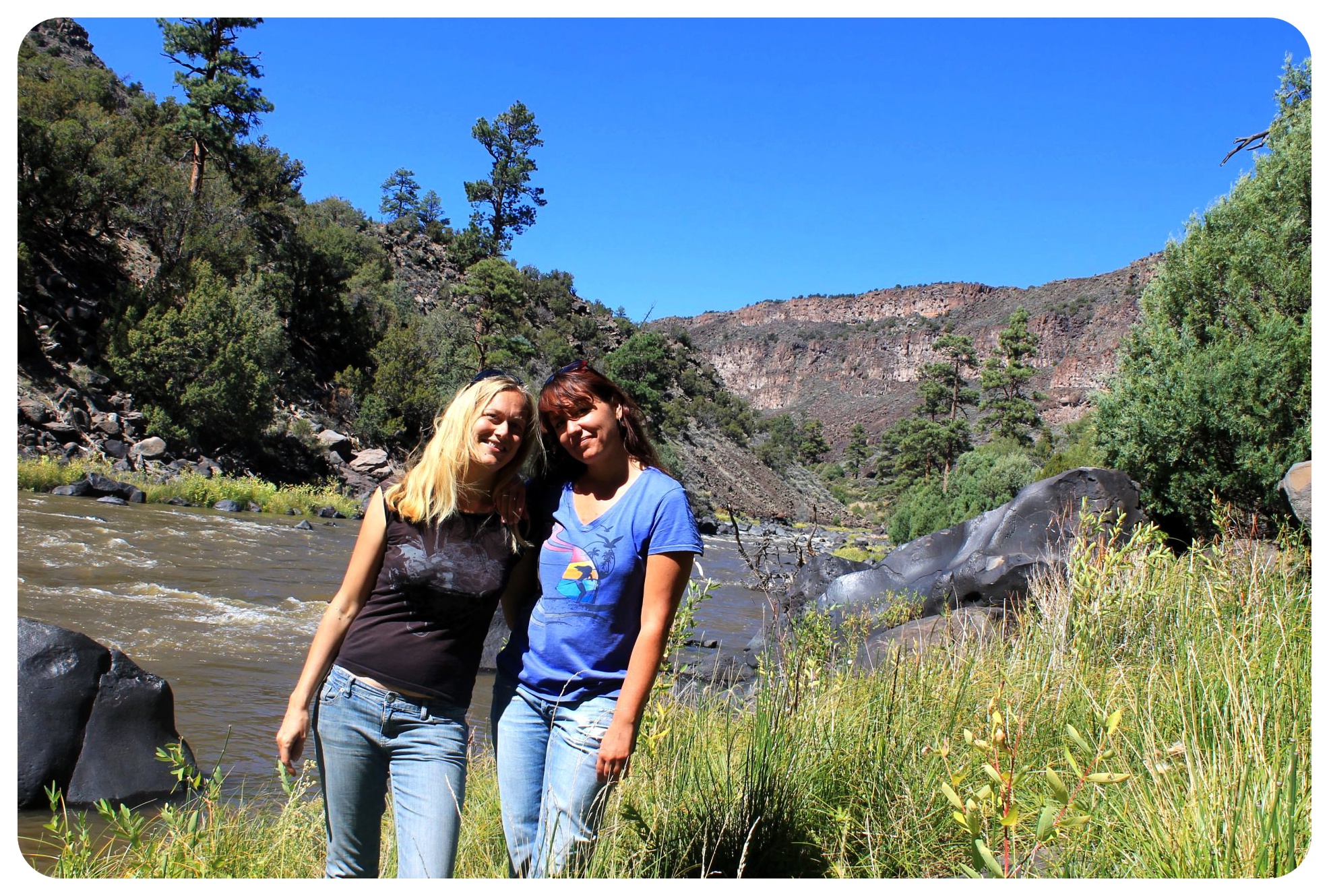 Plus, we hung out with llamas all day – a fascinating experience! At first, it felt a little intimidating to be leading these strangely graceful long-necked animals by a rope down such a steep mountain. We had to practice how to lead them and get to know their personalities. 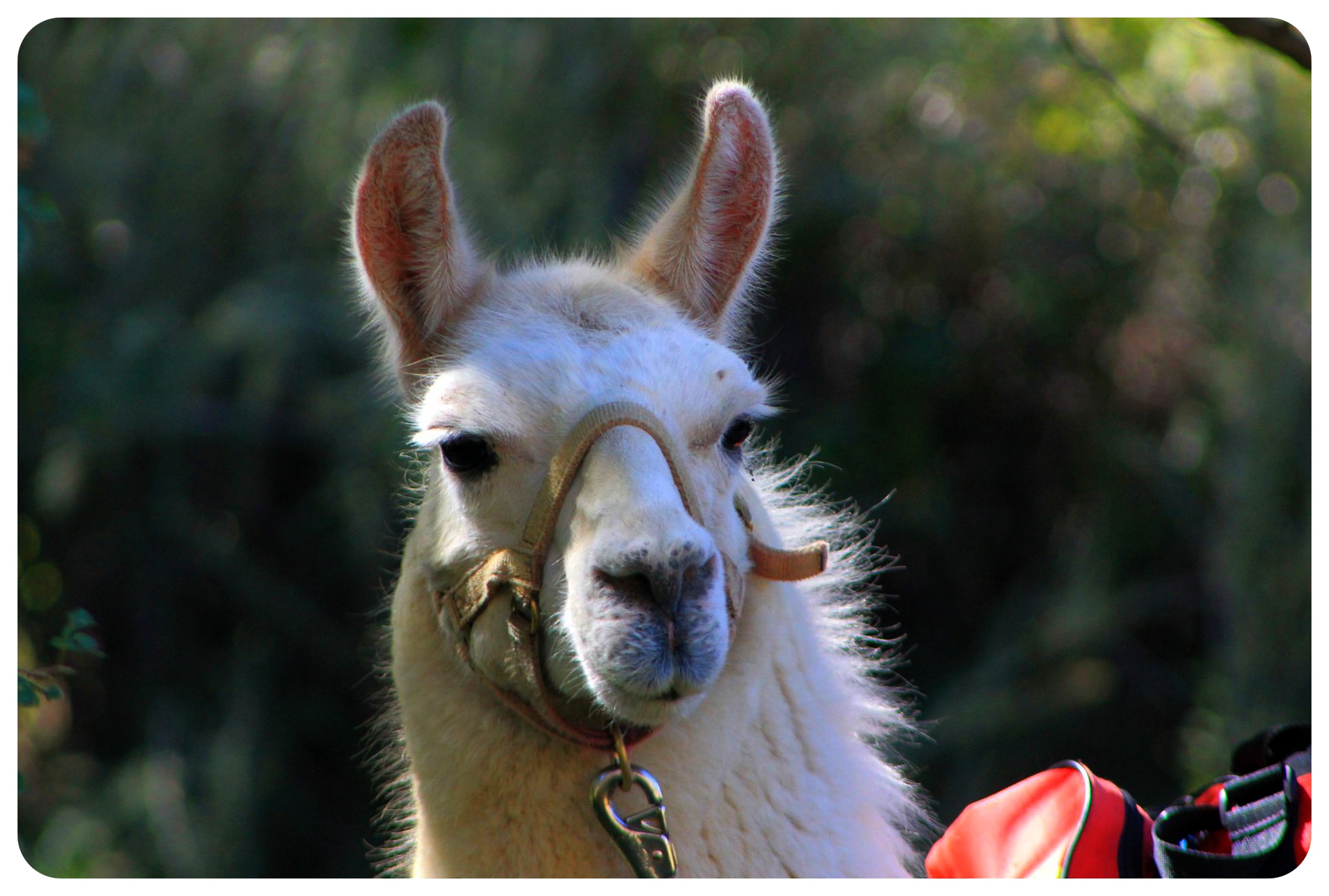 My guy, Diego, was brave and also liked to go to the bathroom a lot. K2 and Picchu stopped all the time just to look around and one of our llamas actually turned into a runner and got loose for a quick second before Stuart got him back over and tied up to his tree during lunch. By the end of the day, leading these llamas around seemed almost like second nature. 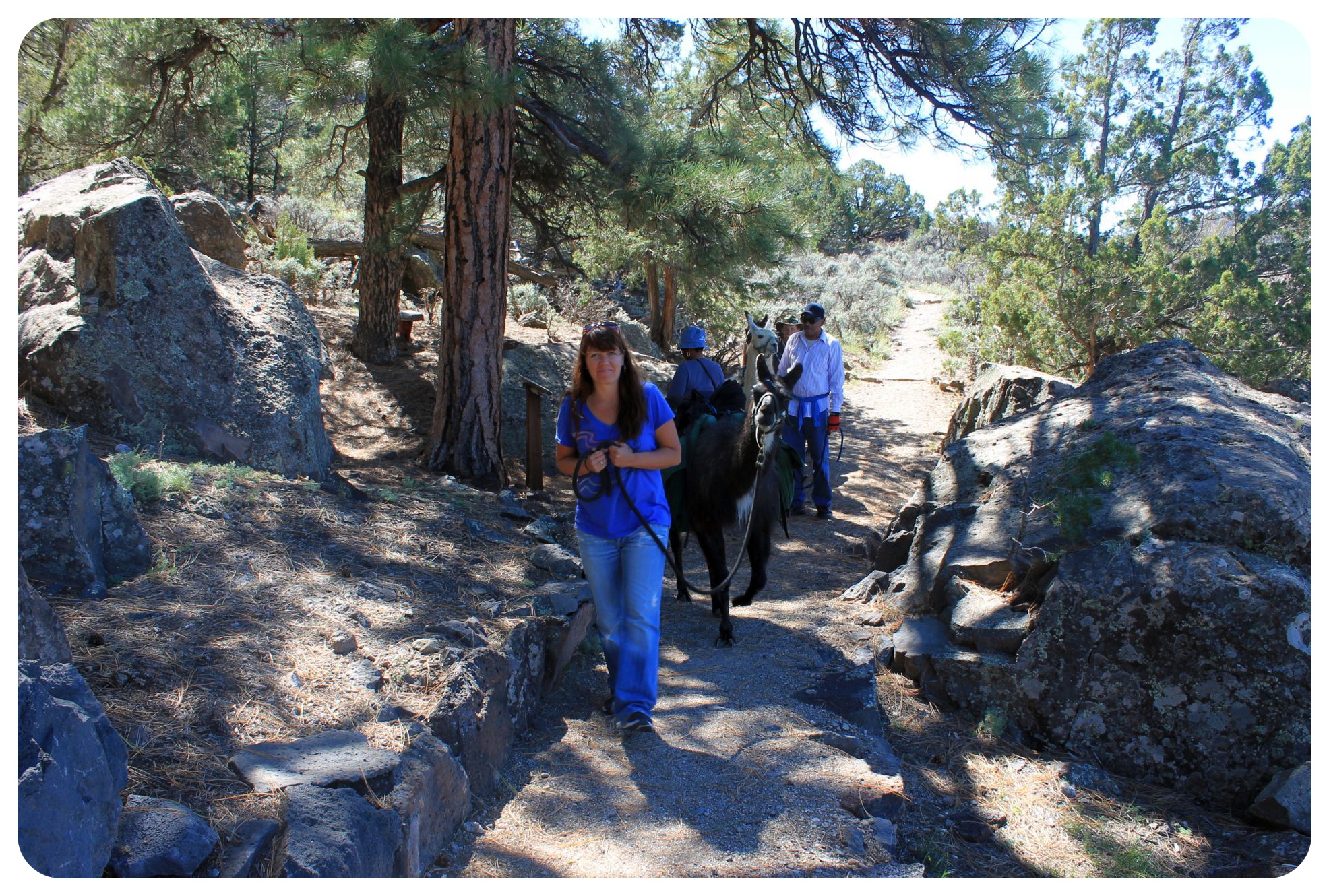 Overall, we learned that llamas are actually fairly slow walkers despite their agility and they are very easy to lead – even for kids! Contrary to rumors, llamas don’t actually spit at people, either. They only tend to spit at other llamas and only in high-pressure situations. They are very soft, but not cuddly. And despite being slower-paced, llamas are excellent trekking partners because of the amount of weight they can carry. Our llamas only carried our backpacks, water and the lunch materials in their saddle bags for the day trek, but Stuart brings groups out on overnight adventures when the llamas carry tents, days’ worth of food and other gear. 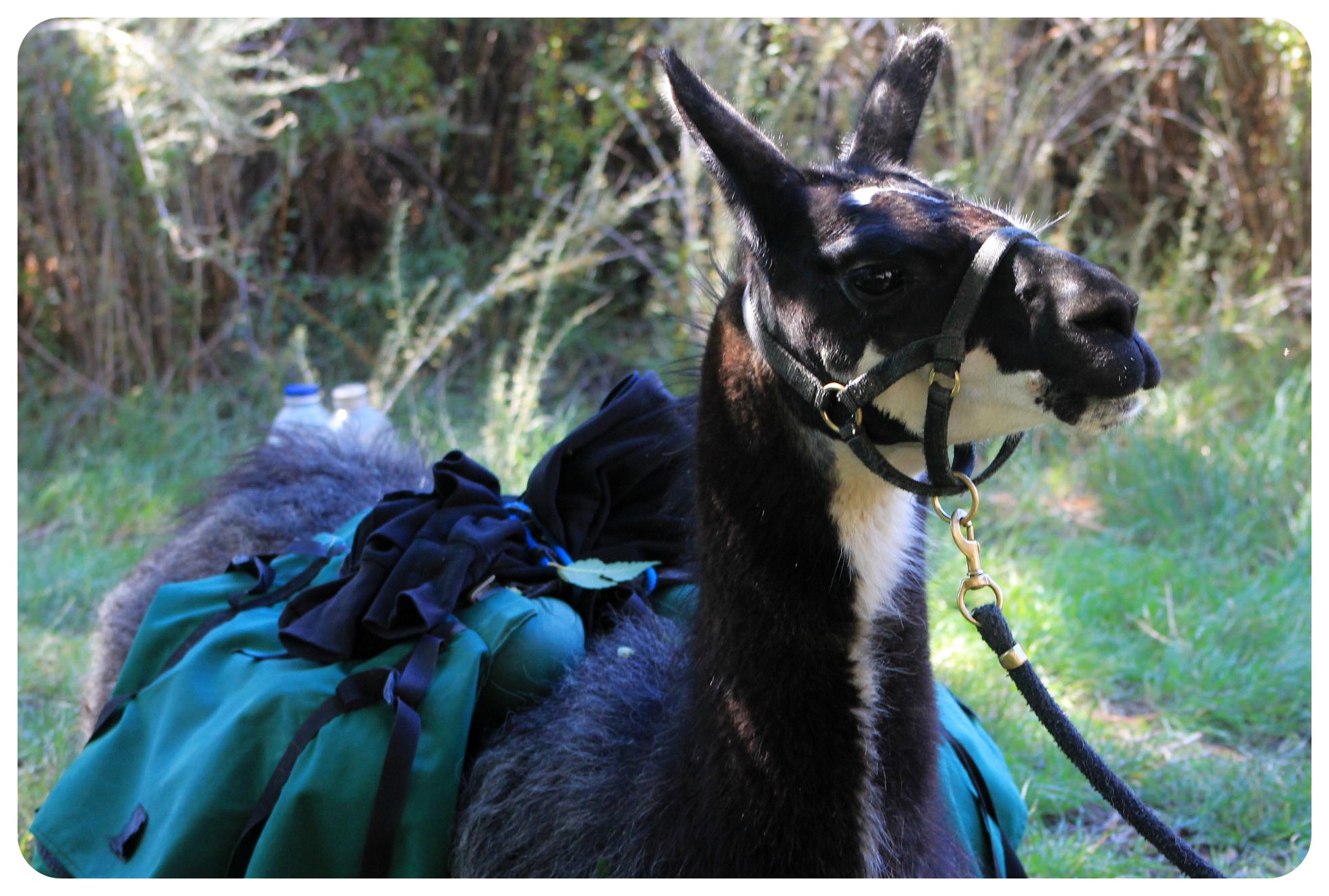 The trek itself, down into gorge, was nothing but a walk in the (national) park for them. This is a 60-mile long, 1,000ft deep canyon carved out by the Rio Grande and the mile-long path up and down is a series of steep switchbacks that pile up on top of each other so that once you make it down to the bottom, there is basically a massive wall of rock on either side of the river. Giant boulders are scattered from there to the riverbank; they are so massive in size it is hard to imagine how loudly these huge rocks must have thundered through the valley as they tumbled down years ago. It was up on a pile of giant boulders where we met those bighorn sheep. 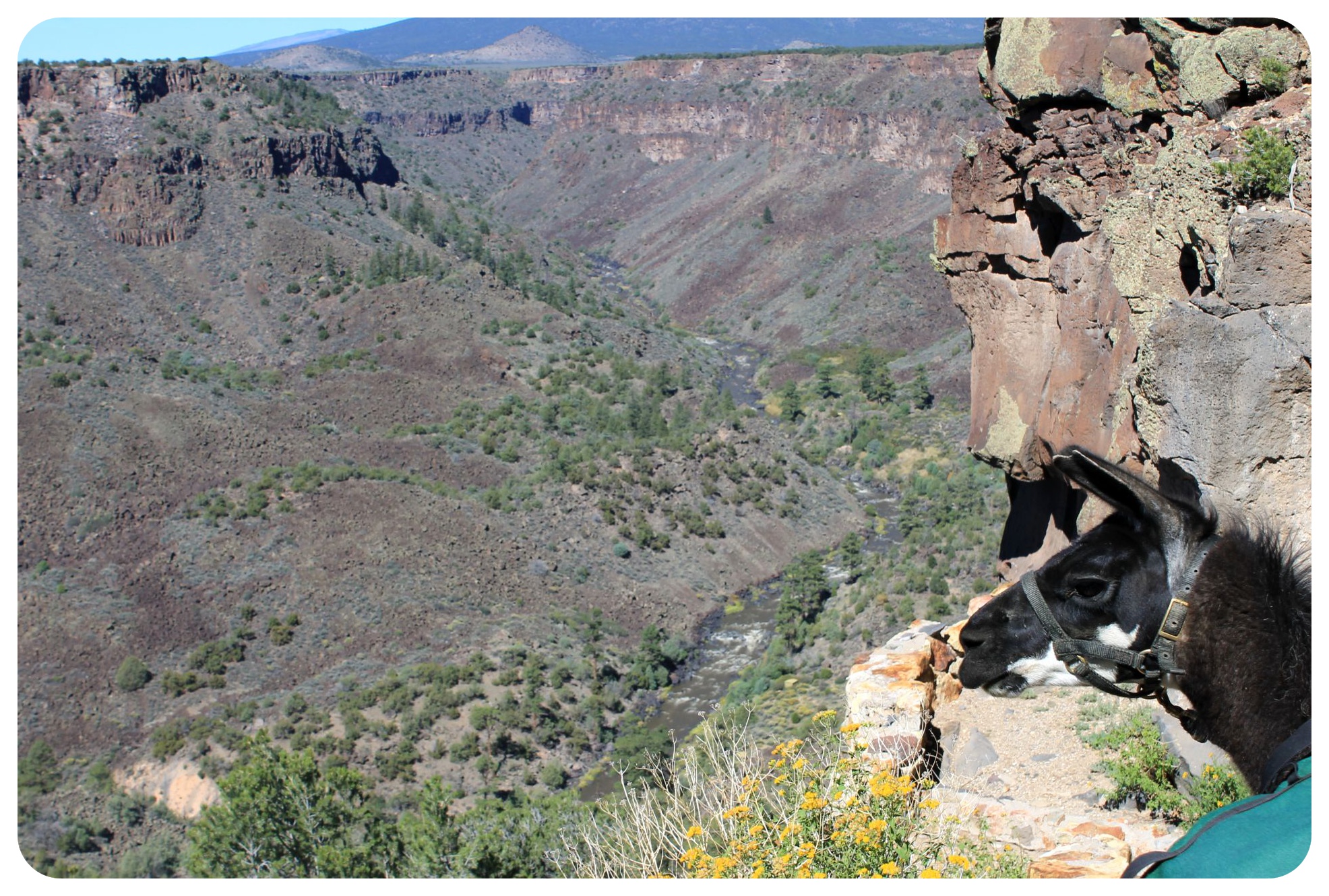 Before hiking our way back up that steep, steep path, Stuart brought us over to another cluster of boulders and we spent nearly an hour crawling around looking at incredibly well-preserved petroglyphs.

Just like with the llamas and the native plants, Stuart is also an expert in the local history between the Native Americans and the white settlers in the area. He explained the meanings of the different petroglyphs and because we were way out in the open in New Mexico, we could experience these historical treasures right there, in their natural habitat, allowing us to get a real sense of what life out here must have been like a few hundred years before. 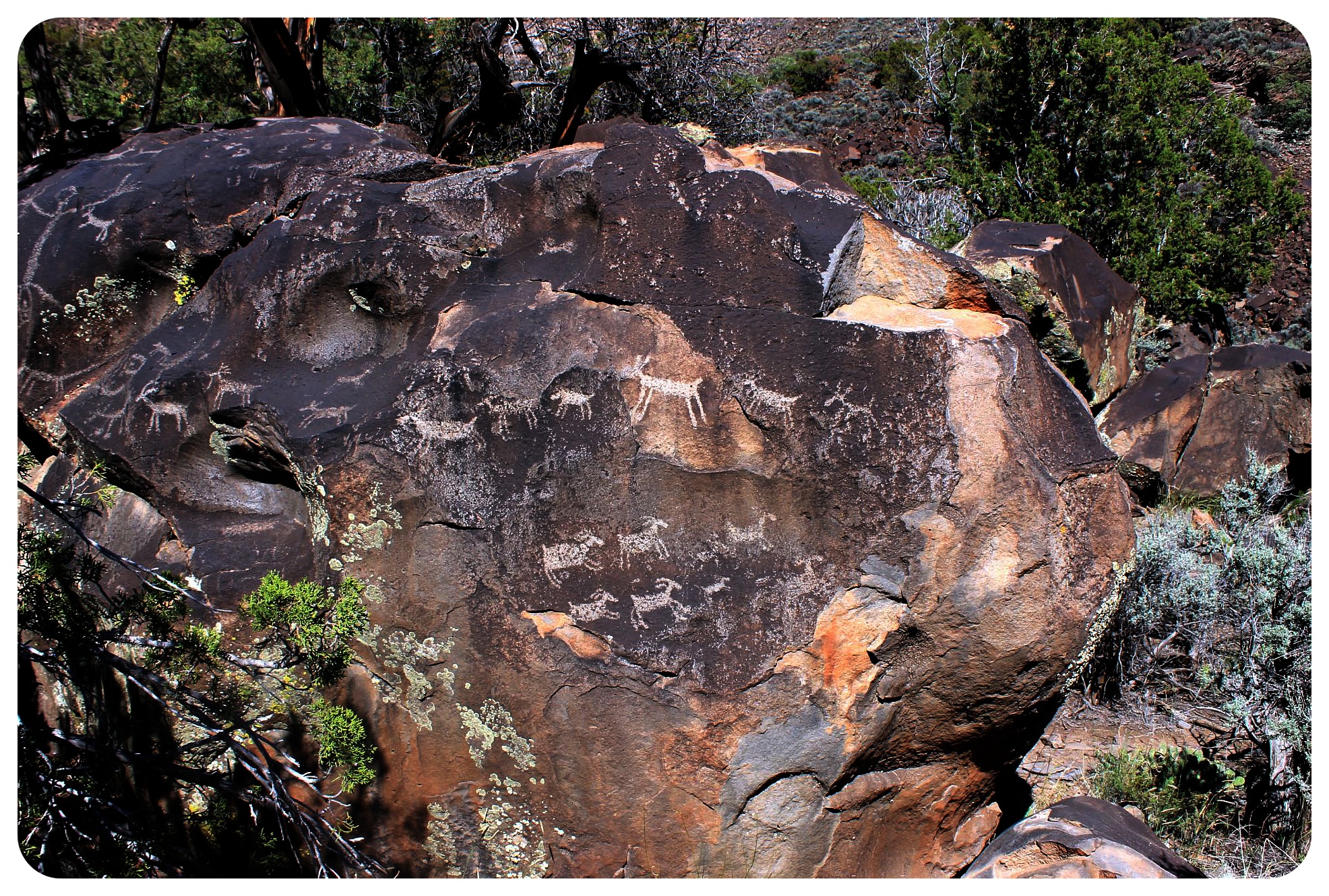 I had been dreading the climb back up the path, but because our llama friends are a pokey bunch and our fellow trekkers needed a much slower pace, the climb ended up being much easier than the two of us expected. Before we started the hour-long drive back to Taos, we all gathered around the truck and let the llamas nibble food out of our hands with their big, funny lips and then we led them one by one onto the back of the truck. 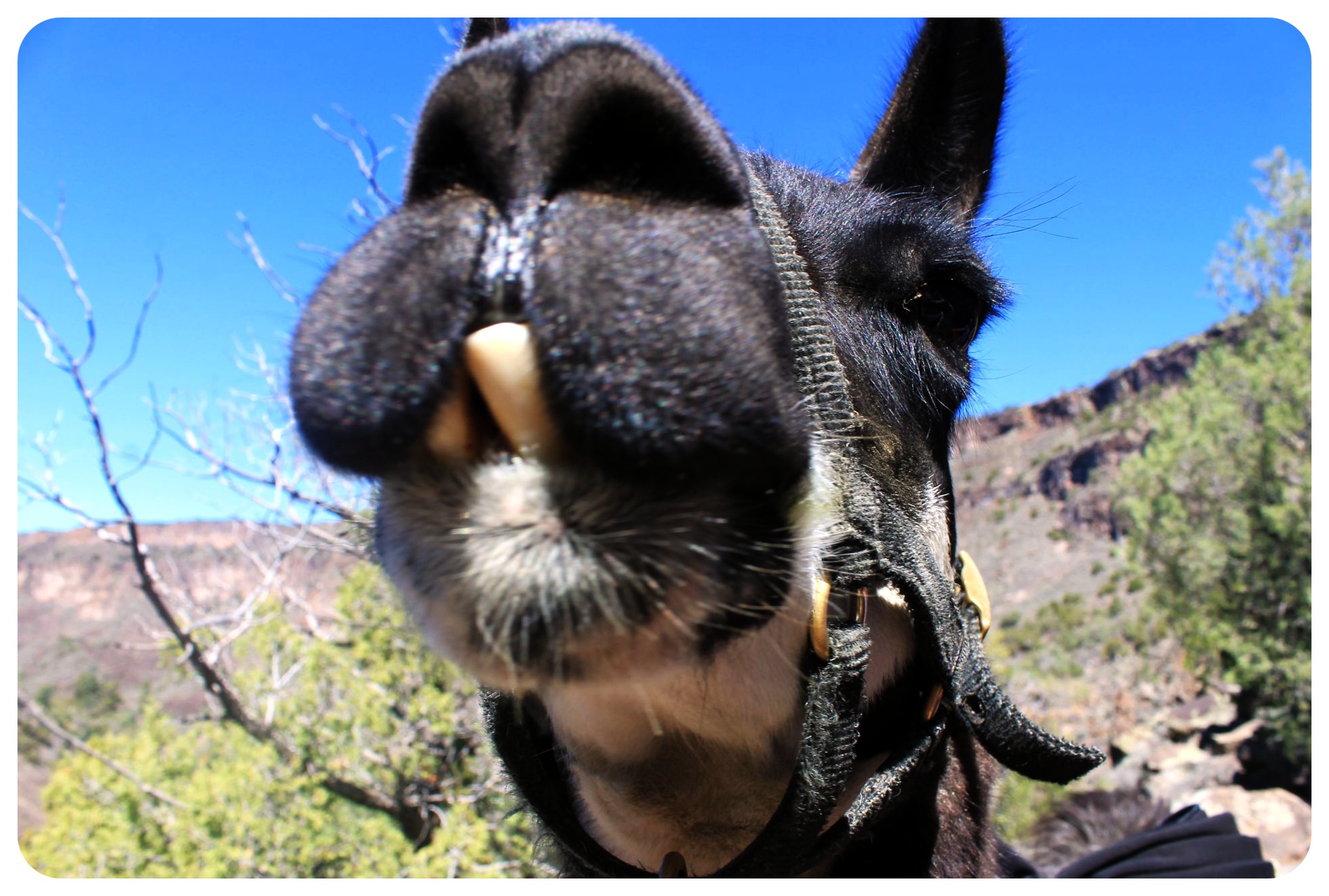 Llama trekking near Taos was hands down one of the best experiences we had during our New Mexico road trip, and by far our best experience ever with llamas. No matter where we traveled in South America, there was no opportunity to spend such quality time with llamas like we did right there in the US. If you plan on spending any time in Taos or even in Santa Fe, drive over and do at least a day hike with Stuart and Wild Earth Llama Adventures. There is seriously nothing quite like it! 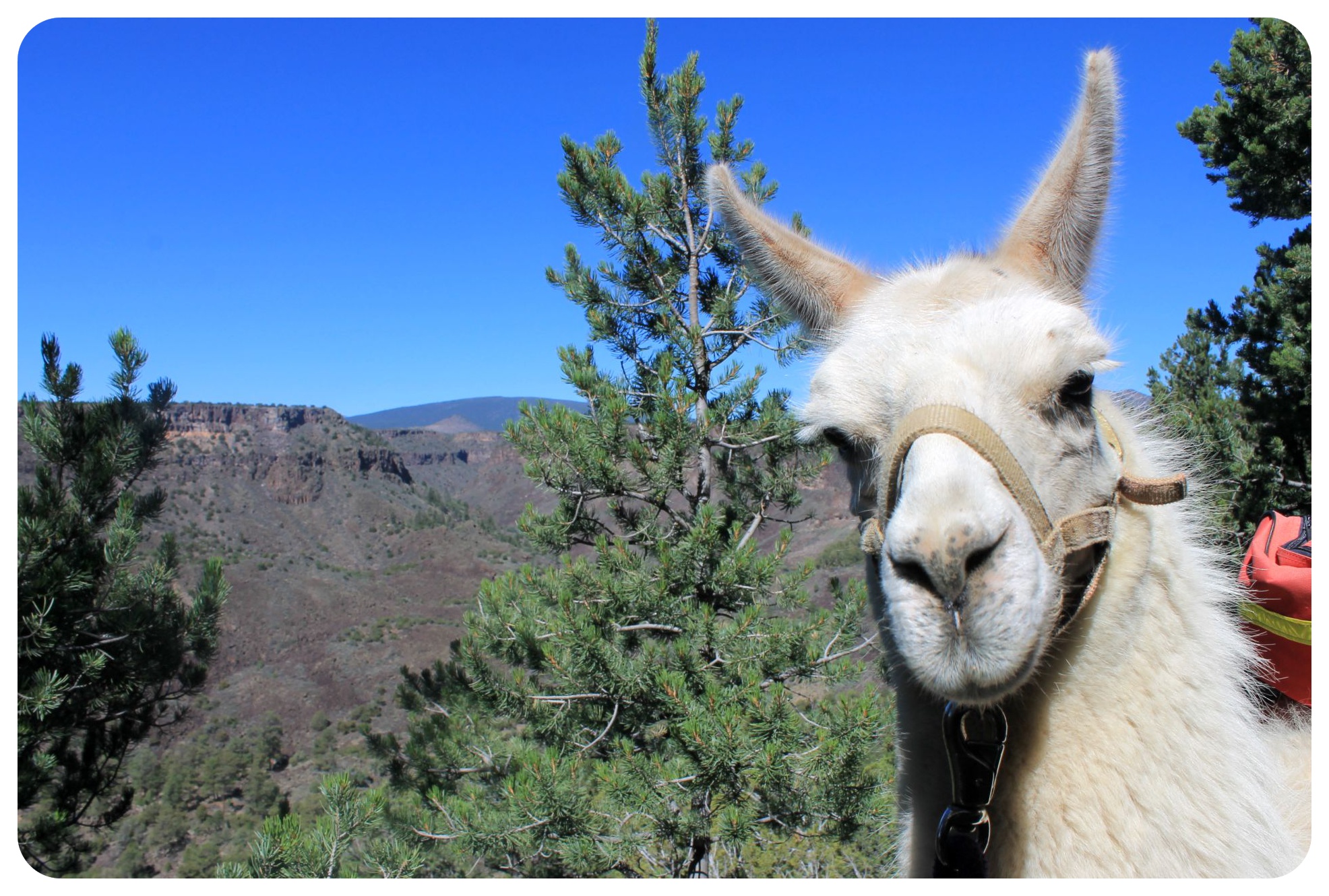 Check out the video of our day with the llamas here: 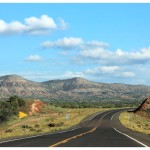 I would love to go Llama trekking! That must of been tons of fun! Great post!

Traveling With a Friend

[…] GLOBETROTTER GIRLS Dani and Jess, a German-American lesbian couple, decided semi-spontaneously to take their work as a copywriter and a recruitment consultant on the road in April 2010 to “see where it all would lead.” They been exploring the world together ever since and blogging to inspire curiosity about the world. Currently they are Llama trekking to the Rio Grande, New Mexico. […]

Great photos! It is as if the llamas were posing for you :-)

They sure were :) I love their funny faces!!