When we lived in London, we used to jet across Europe every chance we could get, taking advantage of the long weekends and the great flight deals from London. One weekend we spotted a cheap hotel deal in Dublin that was too hard to resist, and we booked a flight to Ireland immediately. We ended up loving Dublin and though we wished we had more time in the city, we found that three days is plenty to squeeze in some of the main tourist attractions plus the gorgeous coastline Dublin has to offer. Read on for our highlights from a weekend getaway in Dublin:

After exploring the main sights such as Trinity College, Merrion Square, Phoenix Park and Grafton Street on our first day, we felt it was time for us to quench our thirst by heading to Temple Bar, the city’s nightlife hot spot with plenty of bars and restaurants. From late afternoon on, crowds of people spill out from the pubs onto the cobblestone streets, sipping their pints of Guinness beer. Temple bar is also a great place to listen to live music in the bars and out on the streets filled with rocking buskers. The coastline around Dublin

After seeing the sights of downtown Dublin, we decided to take the DART commuter train along the coast and walk the Howth Coastal Path. Now a suburb, Howth is a former fishing village north of Dublin that retains its village charm and popular, vocal harbor seals. The 3-hour walk along the cliffs offer fantastic views over the ocean. Another easy day trip along the coast was to go south to Dalkey, a suburb also right on the shore. Many of Dublin’s high society have their homes here, including U2’s Bono and The Edge. From there, you can follow the scenic coastal path to Killiney. The sunsets over the Liffey River

On each of the three nights, we walked along the river from our hotel to a restaurant enamored by the amazing sunsets. The water in the river reflects the changing colors of the clouds changing from white and grey to blue and purple, until the entire sky turns bright pink or orange. A stroll along the Liffey River is the perfect end to a long day of sightseeing in Dublin. 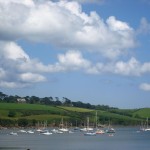 Dublin is a fantastic little city. I went there for a couple of days after Christmas, friendliest locals I've ever met and plenty to do despite it being so small. (Though it was crazily expensive)