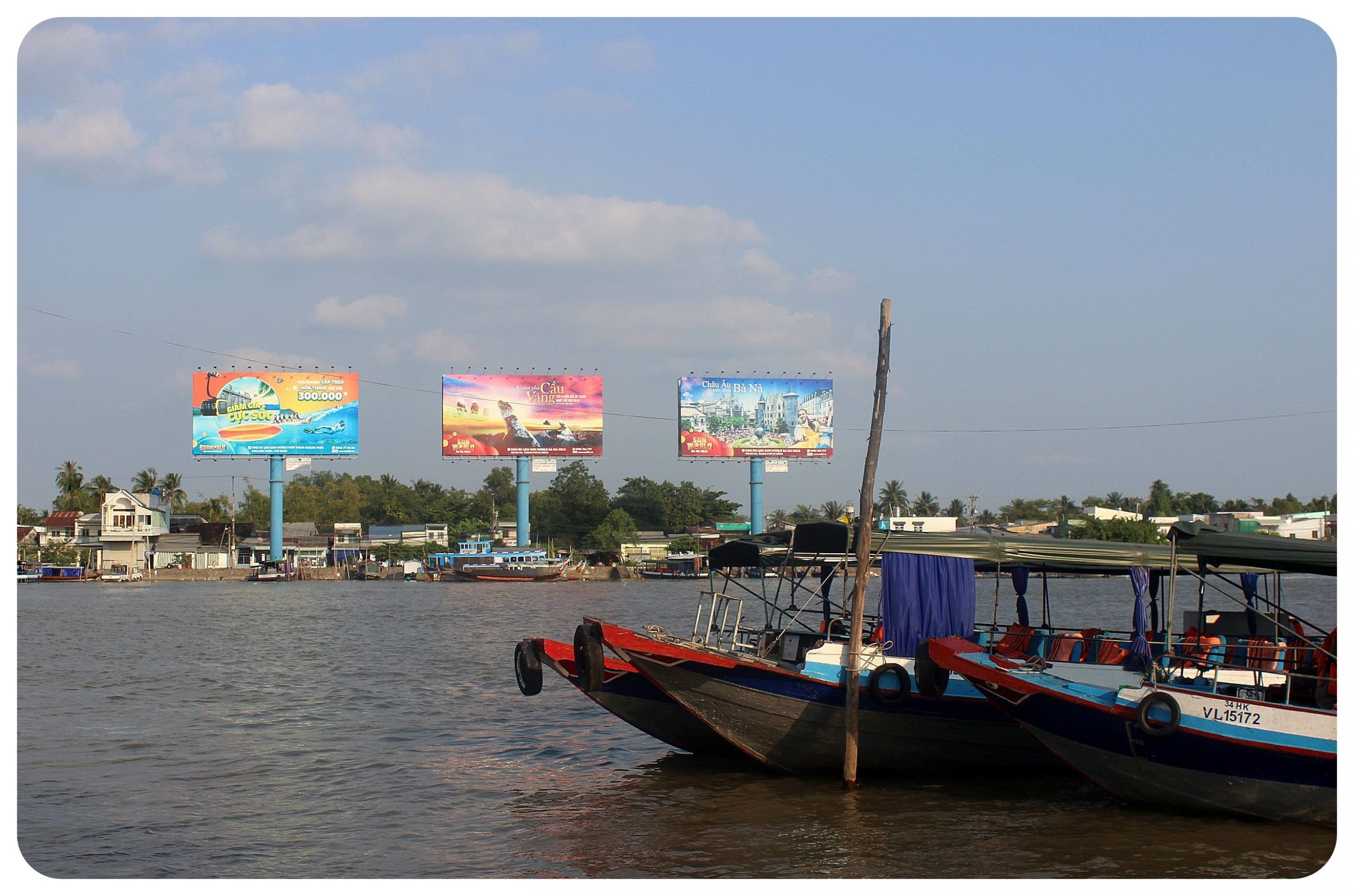 Rach Gia wasn’t supposed to be more than a layover stop on the way from Phu Quoc to Can Tho, and I at first I didn’t even plan to spend the night there, thinking I could take a morning ferry from Phu Quoc, and upon arriving in Rach Gia take a cab straight to the bus station and hop on the next bus into the heart of the Mekong Delta. Upon second thought though, I decided the journey would be quite long (30 mins to the port, 2.5 hours on the ferry, 30 mins taxi, 3.5 hours on the bus, which makes this a 7-hour travel day), and why stress myself? I had time, I wasn’t in any rush, and if I spent the night in Rach Gia I could also take a later ferry and maximize my time on the island. 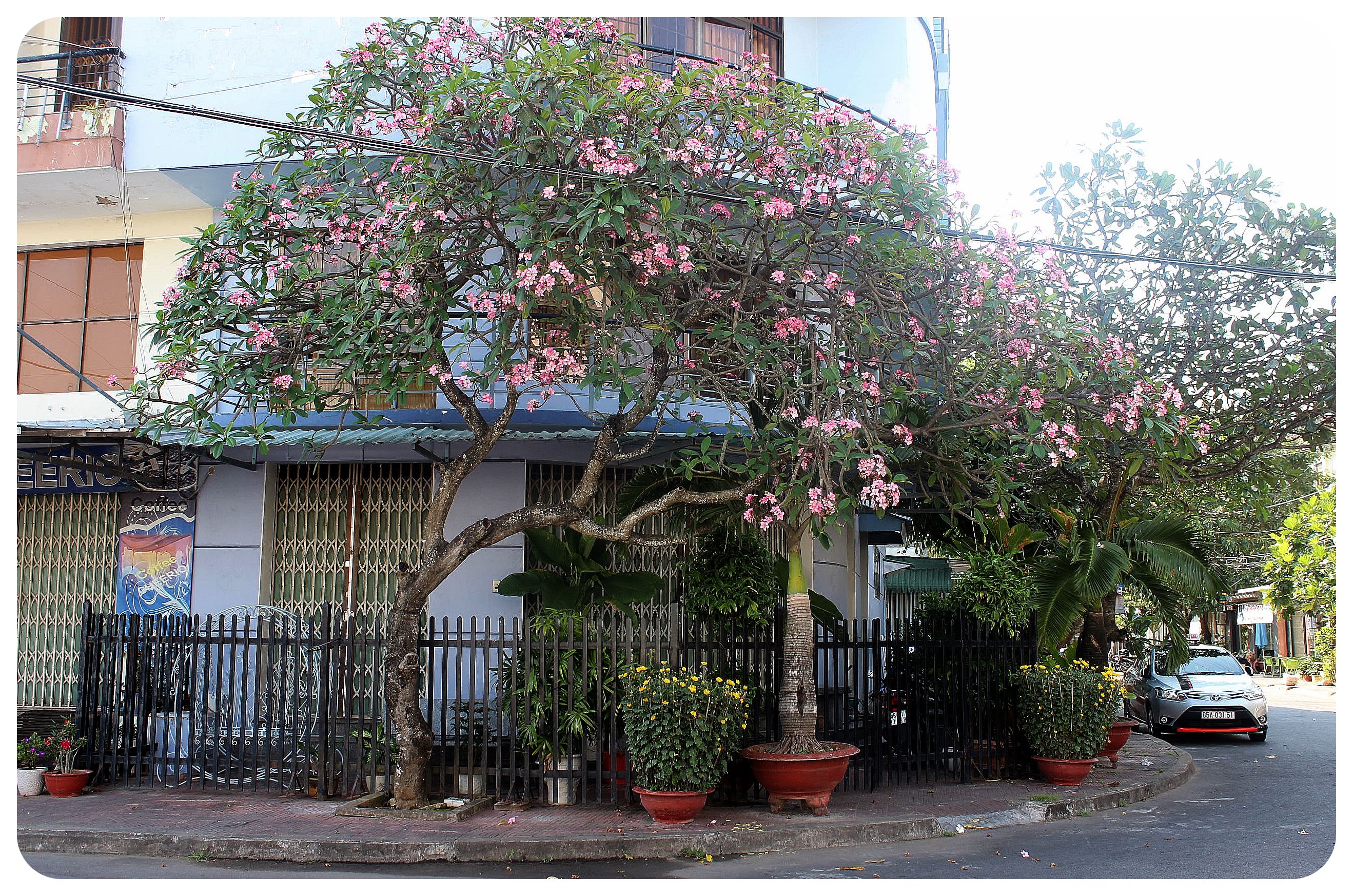 I looked up hotels in Rach Gia and when I saw that the second best rated hotel was a $10-a-night hotel right across the street from the ferry port (the best rated hotel was an $11 homestay, btw), my decision was made. I was also intrigued by the advertised “8 free taxi rides per day included in your stay”, making me wonder how in the world this hotel was making any money. 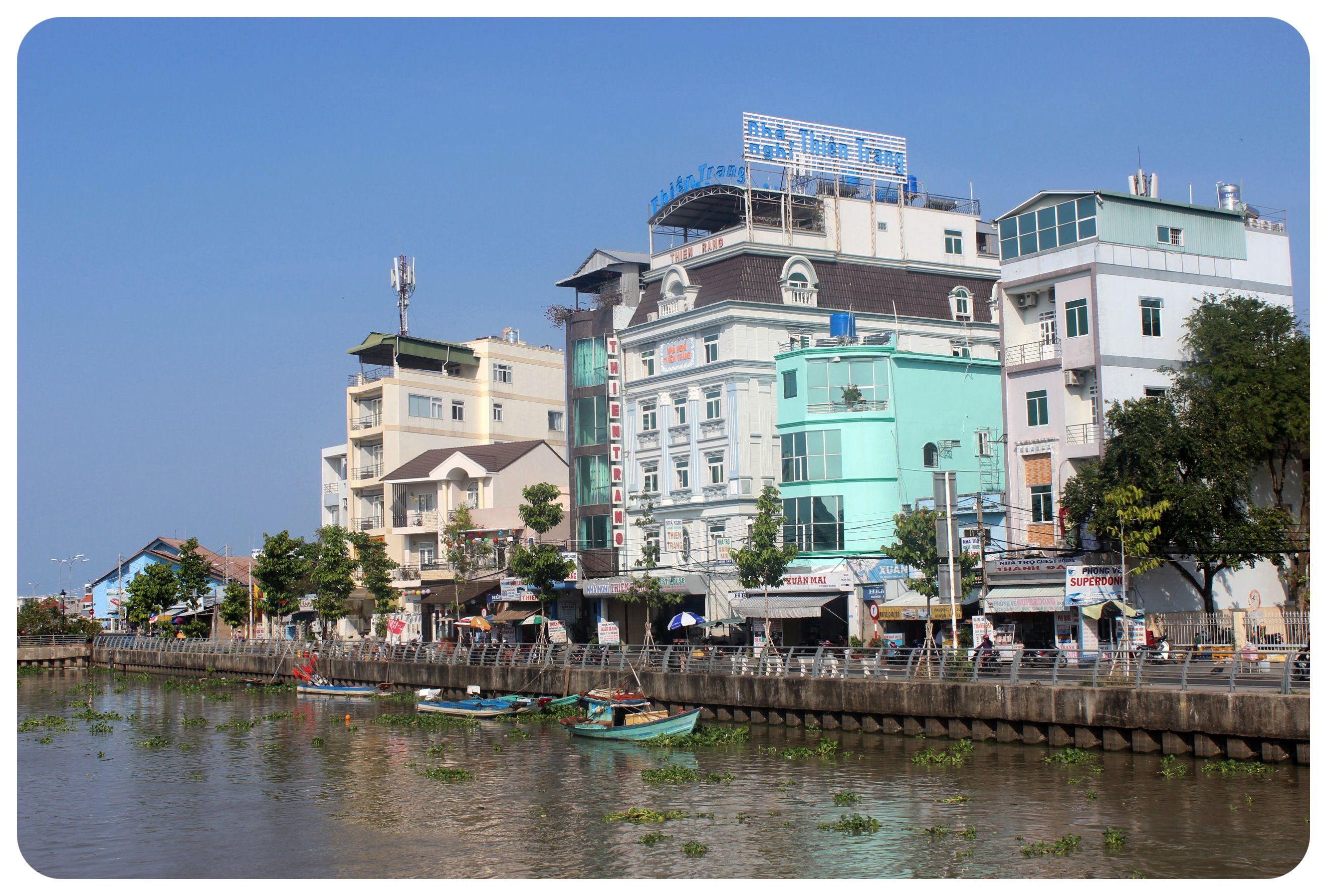 Lucky them: I love walking, so instead of calling a cab I used my two feet and set out to explore the town.

There aren’t many sights in Rach Gia, but I decided to still check out what the guidebook recommended I should see in Rach Gia. The temple the Lonely Planet thought was noteworthy, Nguyen Trung Truc Temple, was just a 5-minute walk from my hotel, and since I do love me a good temple, I decided to start my exploration of the town right there. 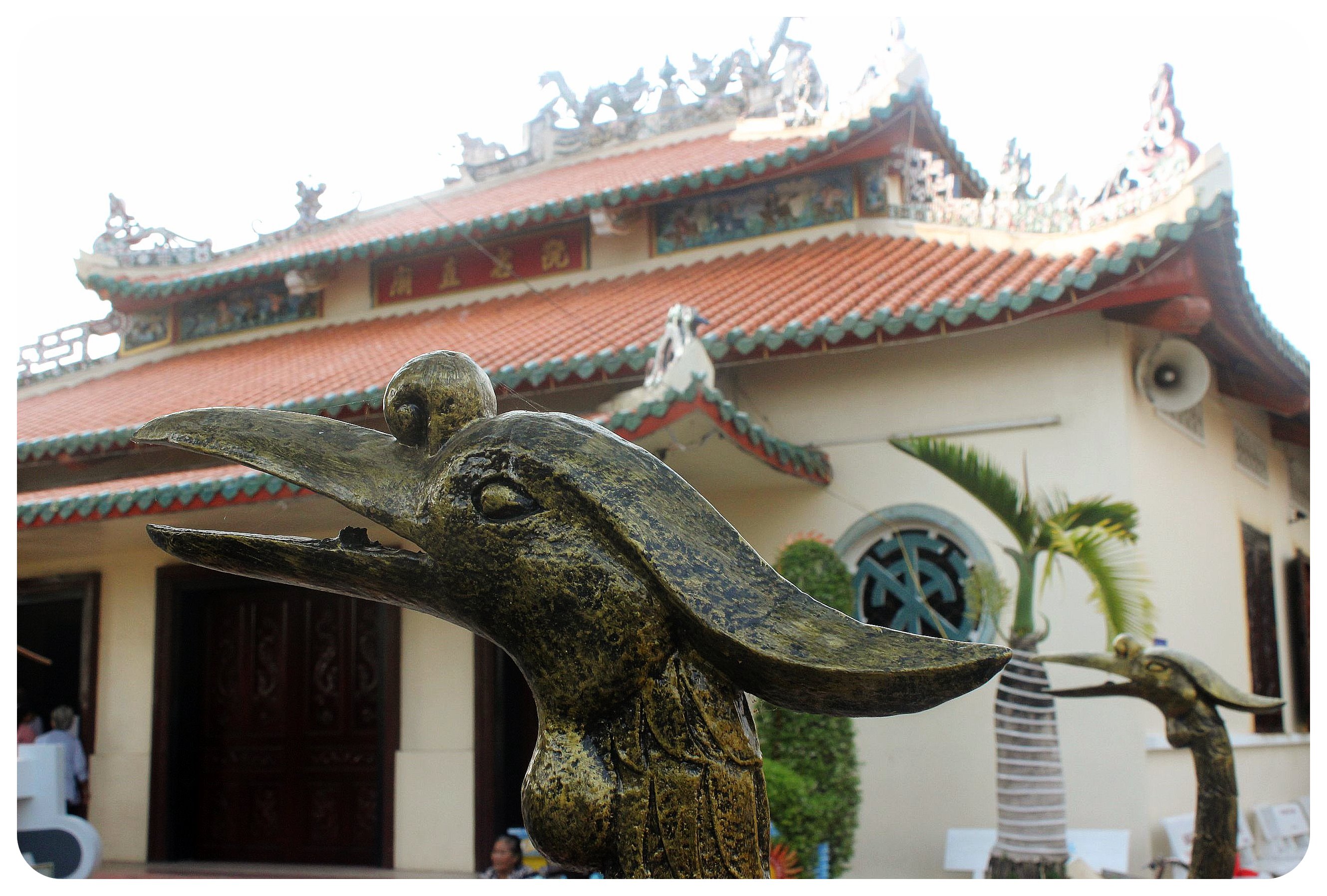 The temple is dedicated to a Vietnamese resistance fighter, Nguyen Trung Truc, who led a raid against the French army when they arrived in Vietnam in the 1860s. He burned a French war ship and was eventually executed for this in the market place of Rach Gia. The temple features a sculpture of Trung Truc on the altar, and various interesting details inside the main temple as well as the grounds surrounding it, including beautiful dragon-shaped bushes and an altar built into the trunk of a majestic old tree. 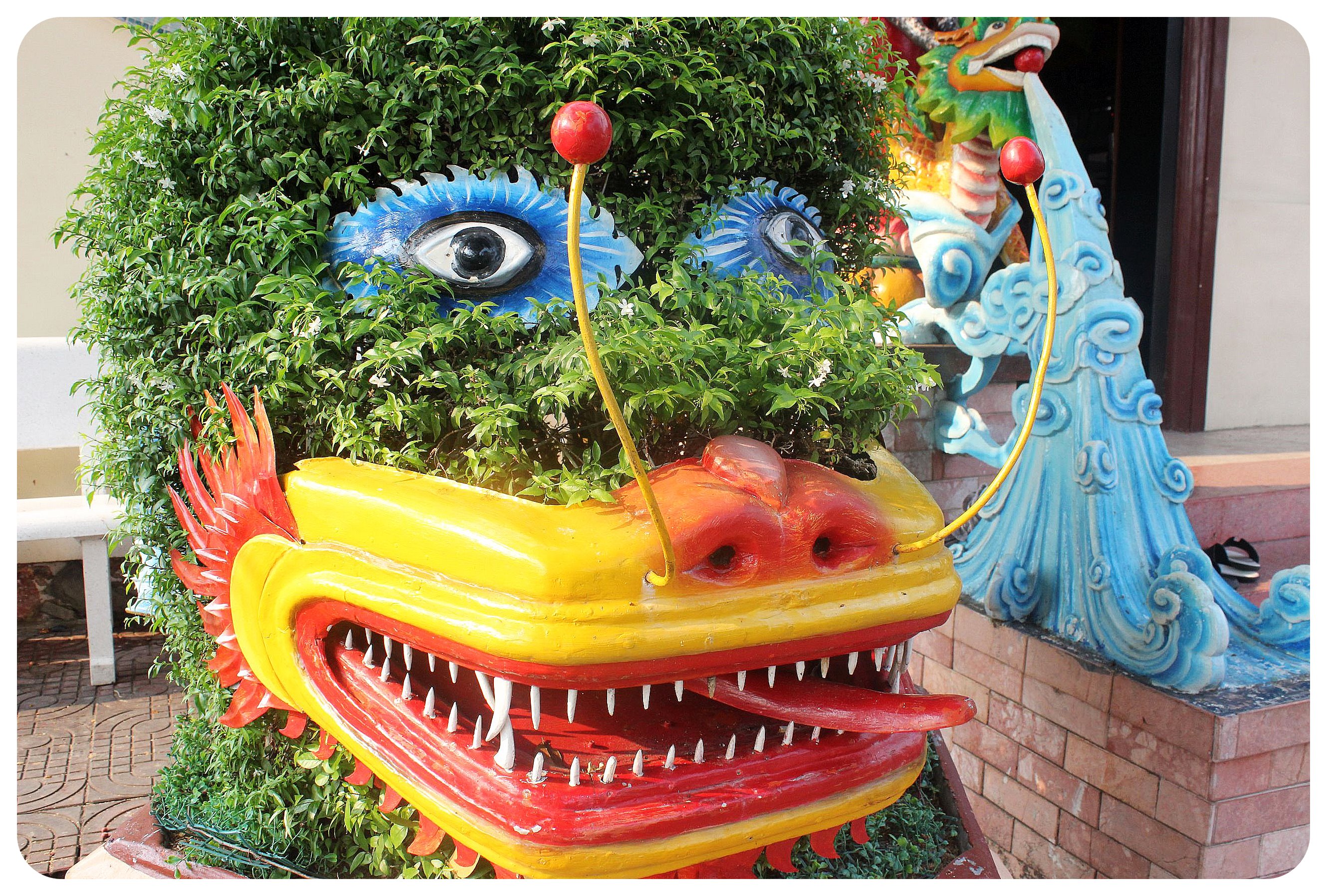 I crossed the footbridge across from the temple, crossing the first of two rivers that cut through the city. After reading the lackluster description of Rach Gia in my trusted Lonely Planet, I didn’t expect much beyond a boring port city, but to my surprise, I found the town rather charming. I wandered along tree-lined streets, flowers blossoming in big flower pots on the sidewalks, a few chickens and roosters roaming the streets, and many cafes spilling out onto the sidewalks. The many trees on the sidewalks offered natural shade – perfect to have a glass of iced coffee underneath one of them. 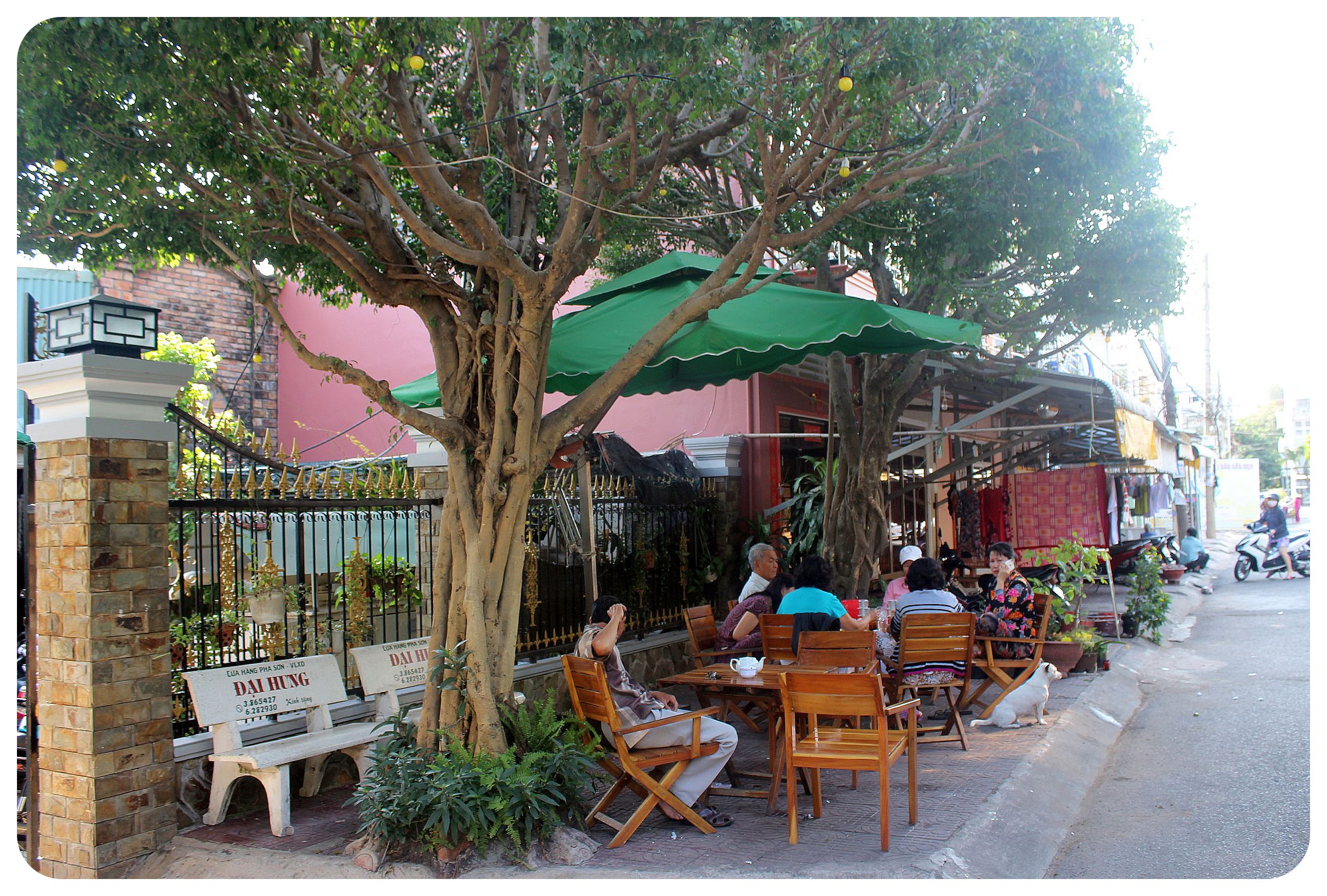 My first stop was Lau Chay Hoa Sen – the vegetarian restaurant Hoa Sen – which I had found thanks to Google (thank God for GoogleMaps and modern technology – it is now so much easier for vegetarians to find meat-free restaurants!), and which turned out to be a Hot Pot restaurant. If you ever had Hot Pot, you know that it is usually a dish that’s to be shared, but since I was starving, I ordered it anyway, even though I was by myself. 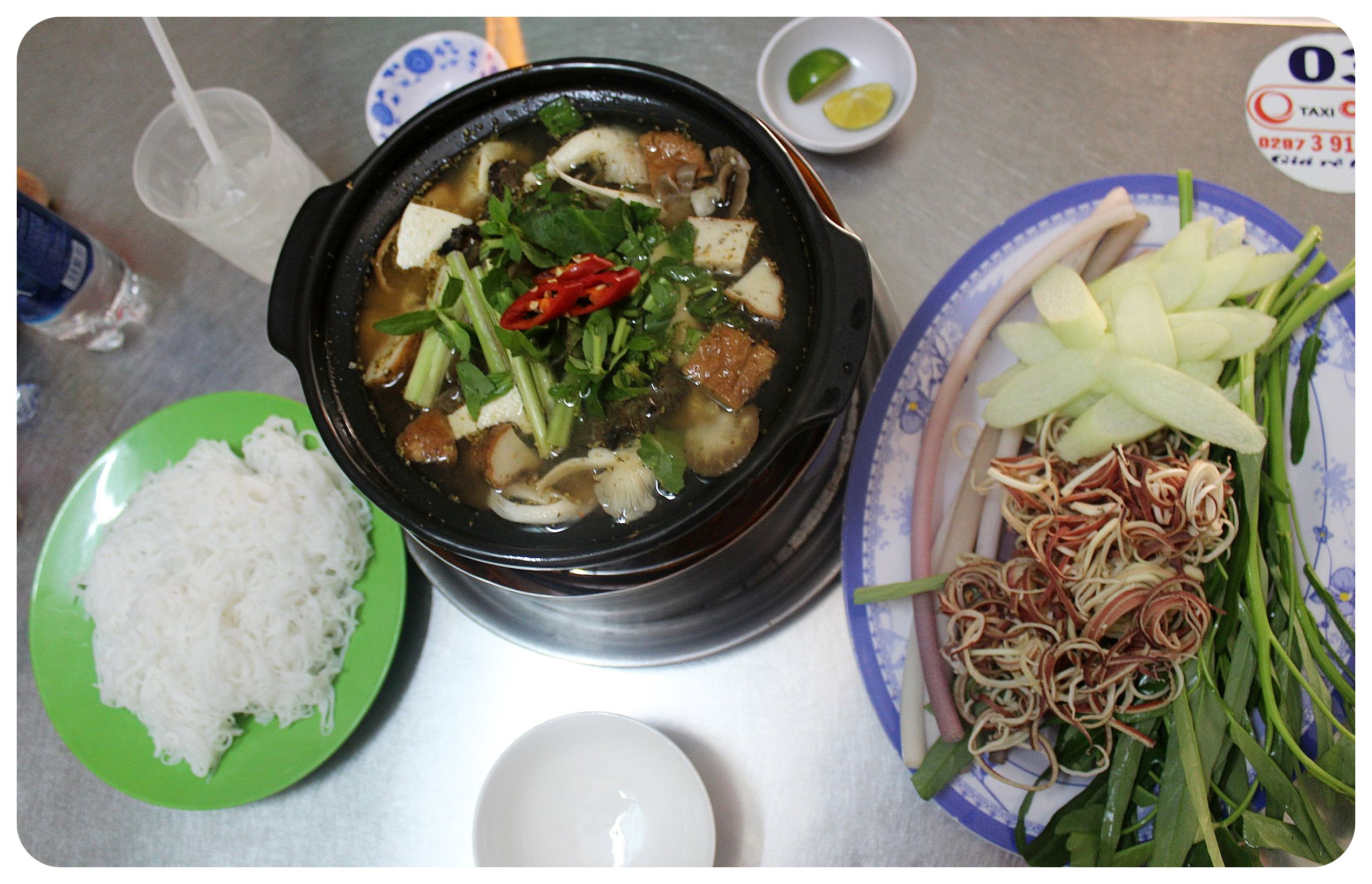 As the family who runs the restaurant started setting up the food in front of me, I realized that I had no idea how to cook all the vegetables the right way. And while I was still looking at the hot pot and the large plate with raw vegetables (half of which I had no clue what it was) and herbs with a puzzled look on my face, the family’s grandpa came over and motioned to me if he could add some veggies to the sizzling mixture of broth, tofu and mushrooms. English was not spoken here at all, but luckily, body language goes pretty far, and after I nodded and gave him my brightest smile, he started to break the large vegetables up into smaller pieces and added them to the mixture. 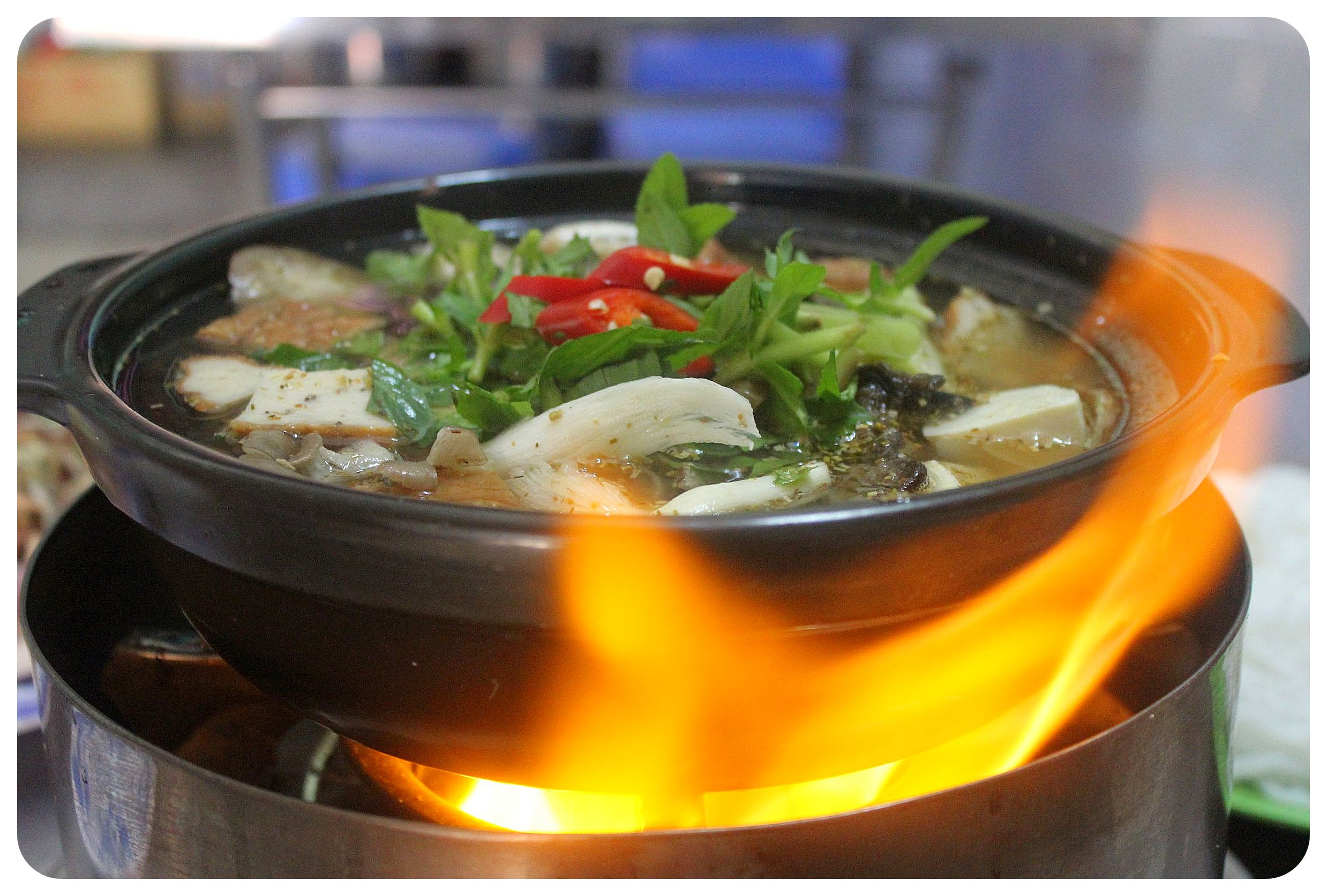 He then showed me how to add the rice noodles that they’d served on a different plate, and how to get the right mix of herbs, veggies, tofu and broth in the little bowl they put out there for me. The entire family was sitting at a table across the room from me, laughing and watching me enjoying my first hot pot experience. And how I enjoyed it! I kept thinking how flavorful the herbs were, how fresh everything tasted, and how I didn’t want the meal to end (just like with all the other meals I’ve had in Vietnam so far). But an hour later, I left the restaurant stuffed and grateful for their hospitality. 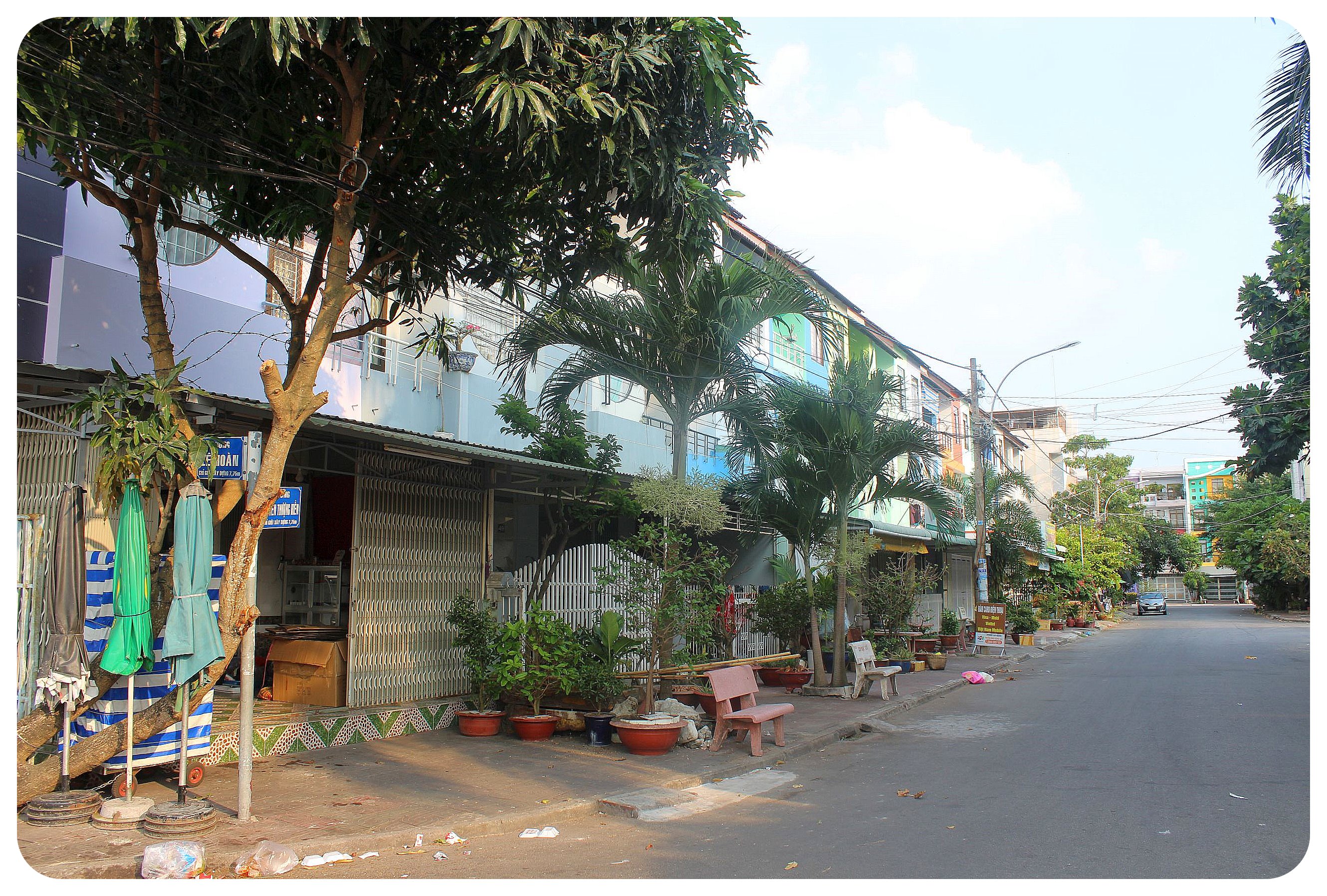 One thing I noticed on my stroll through town was how much more welcoming the people here were – every cafe I passed I heard excited ‘hellos’, every kid I passed waved at me and also practiced their limited English skills (‘hellooooo’), people who drove by me on their scooters waved at me. I hadn’t felt that welcome in any of the places I’d visited so far, but that said, Rach Gia was only the third stop on my Vietnam trip after Saigon and Phu Quoc. People in Saigon seemed to have the typical “big city grumpiness” to them, and people in Phu Quoc seemed mostly annoyed with all the foreigners on their little island. One bar owner told me that Russians, who make up the majority or tourists there, could be pretty obnoxious, so I can’t blame them for their indifferent way of acting. 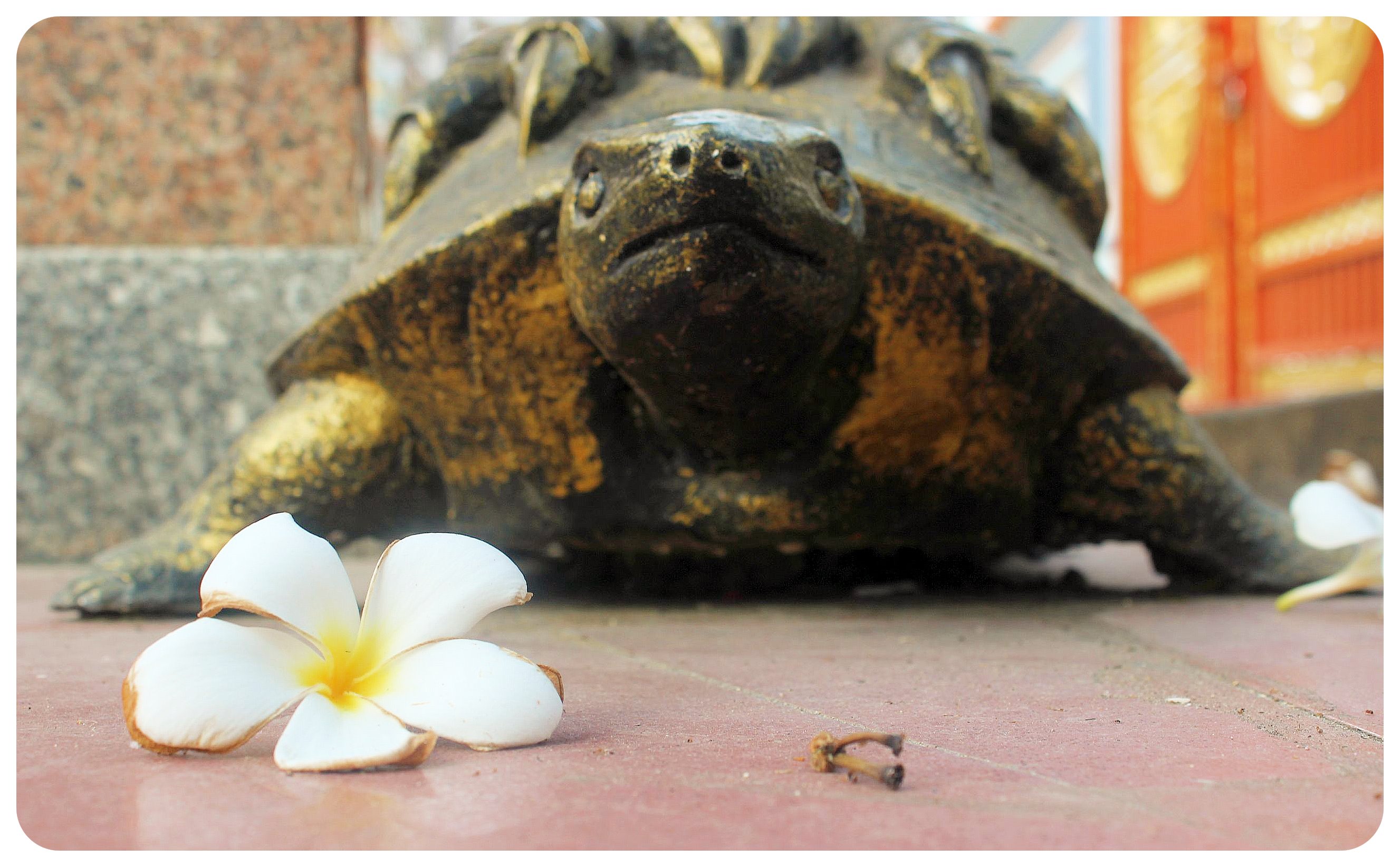 It seemed like I was the only white person in town, and I was so aware of this that I got excited when another “mi chang”, as the Vietnamese call white people, passed me on his scooter, barely able to resist the urge to excitedly wave at him. What I found so pleasant about Rach Gia was the fact that this wasn’t a touristy place whatsoever. Instead of ticking off sights I was able to just wander and soak up the atmosphere, take in the local life, people watch and observe. 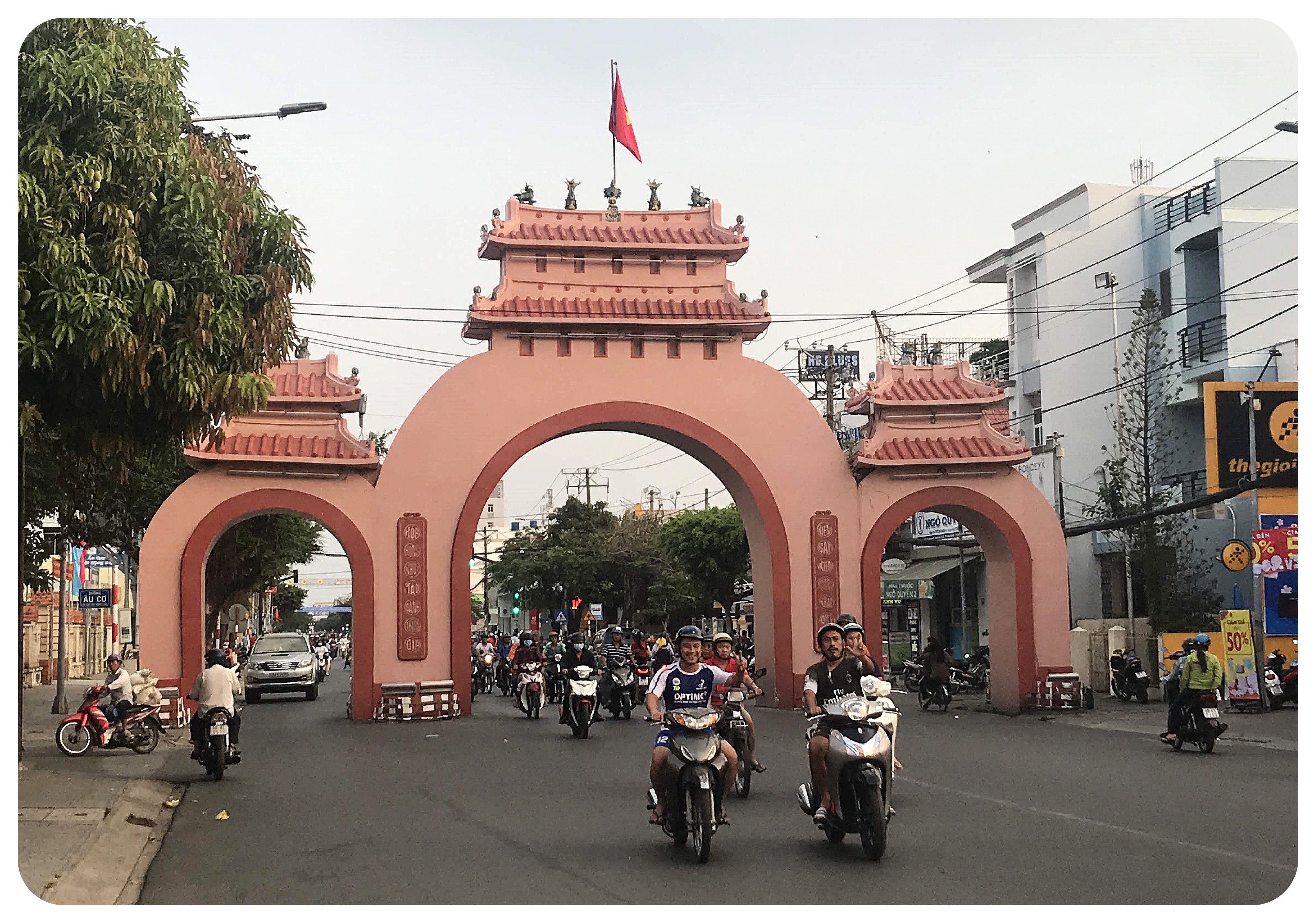 On Nguyen Trung Truc Street, I was walking by plenty of fancy-looking boutiques and clothes stores, intercepted with little areas on the sidewalk where people set up their street food stalls and sold banh mi sandwiches or noodle dishes. I stopped at a cafe for an iced coffee, and somehow ended up with three drinks. 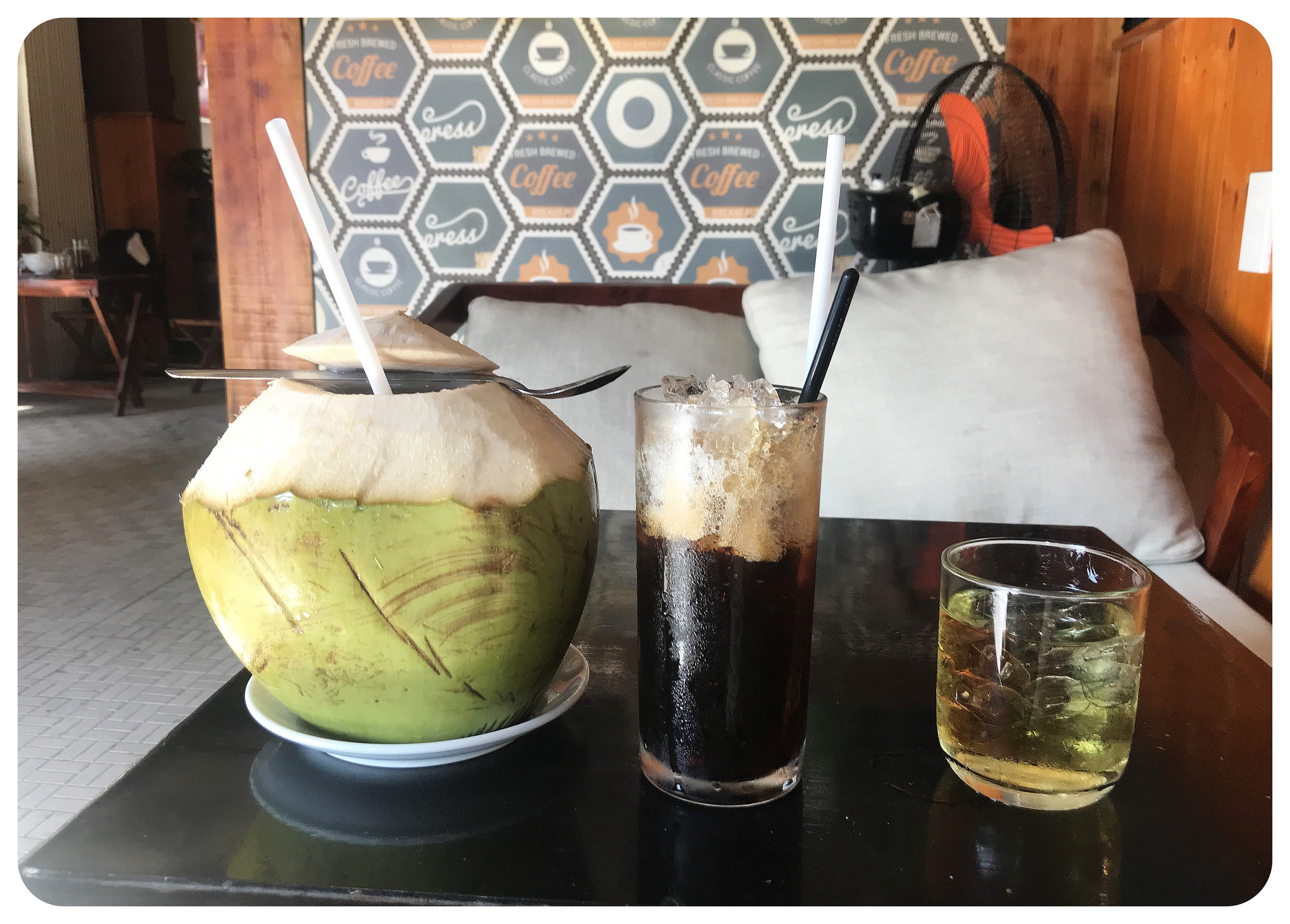 The main street of the city, Lac Hong, is a wide 4-lane boulevard that leads all the way down to the waterfront, and is lined with shops and small cafes, some of which were so hipster-cute that they could’ve been straight out of Seoul or Bangkok. I strolled down the boulevard to the very end, where it merges into Park Cong Vien Bai Duong (Ocean Beach Park). Stone tables are set up right on the shore here, so that people can enjoy the vast sea views. 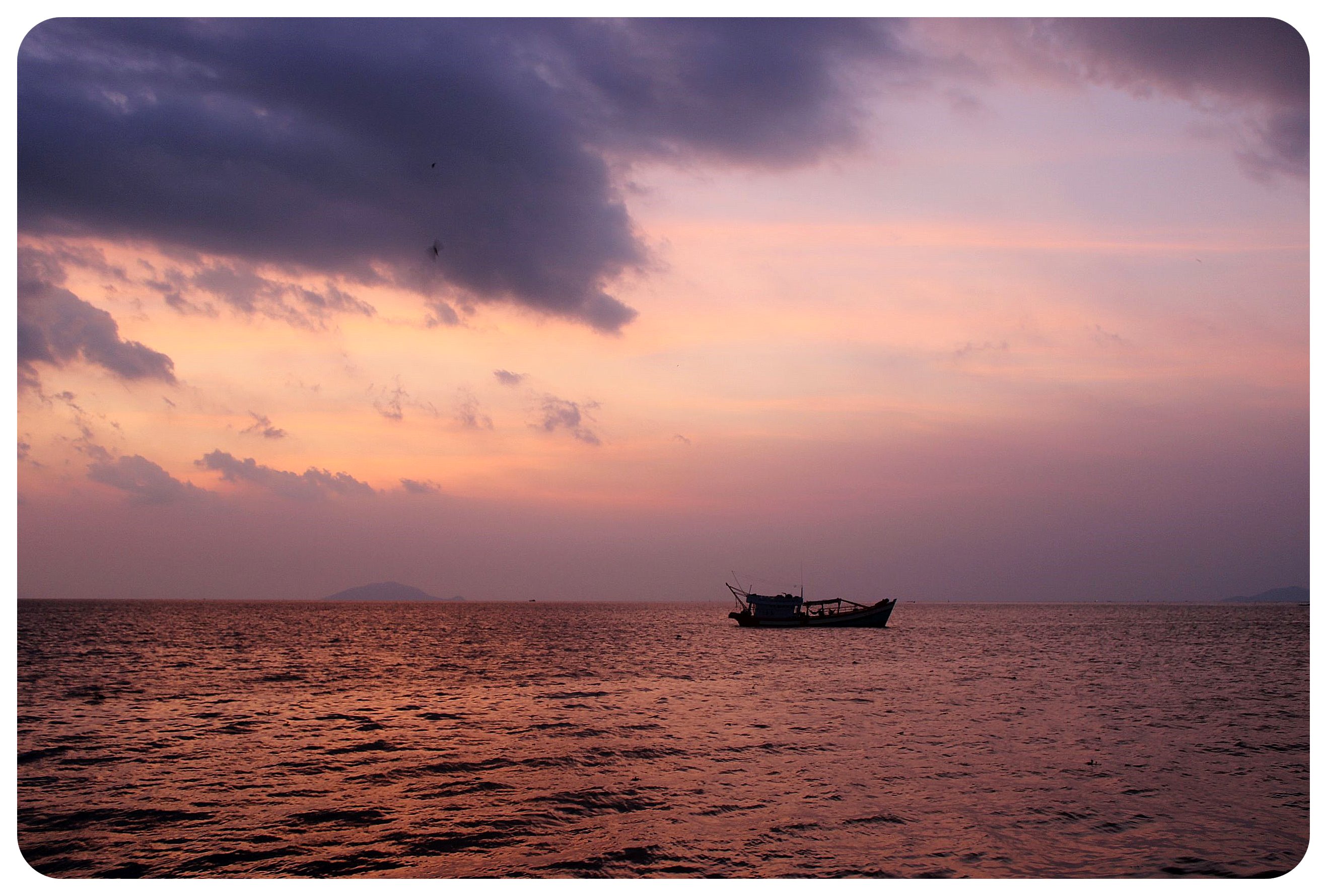 This is a place that is particularly scenic during sunset, and I lingered for a while before I headed over to Eden, a stylish Korean restaurant / coffee shop right next to the park. 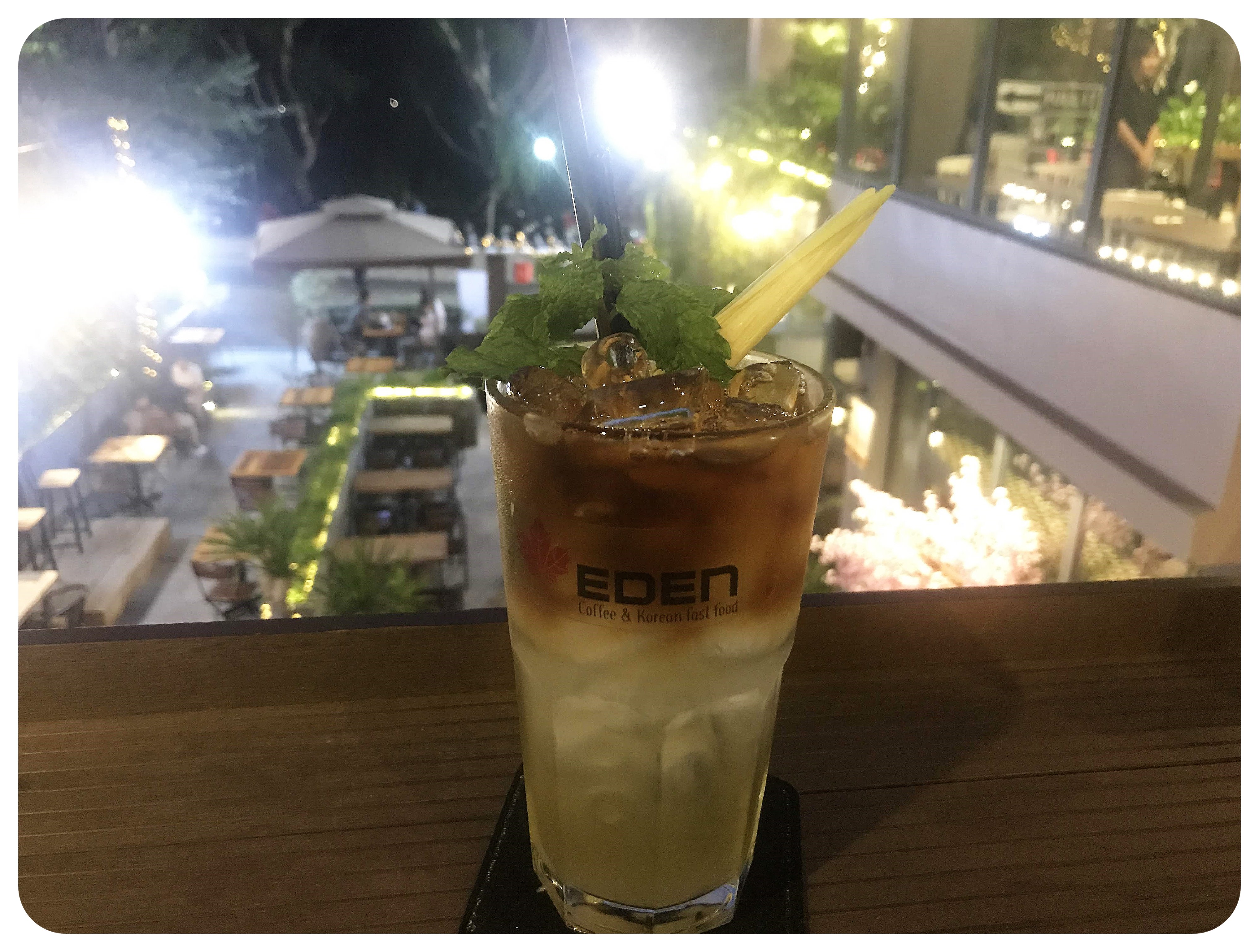 The hotel had recommended it to guests in an old-fashioned folder with restaurant and bar recommendations (which I truly appreciated, considering the Lonely Planet didn’t have a single food recommendation), along with Boulevard Cafe, just one block away, and where I had to stop for a quick coffee simply because it was so pretty with hundreds of lights installed in the many trees right in the courtyard of the cafe. 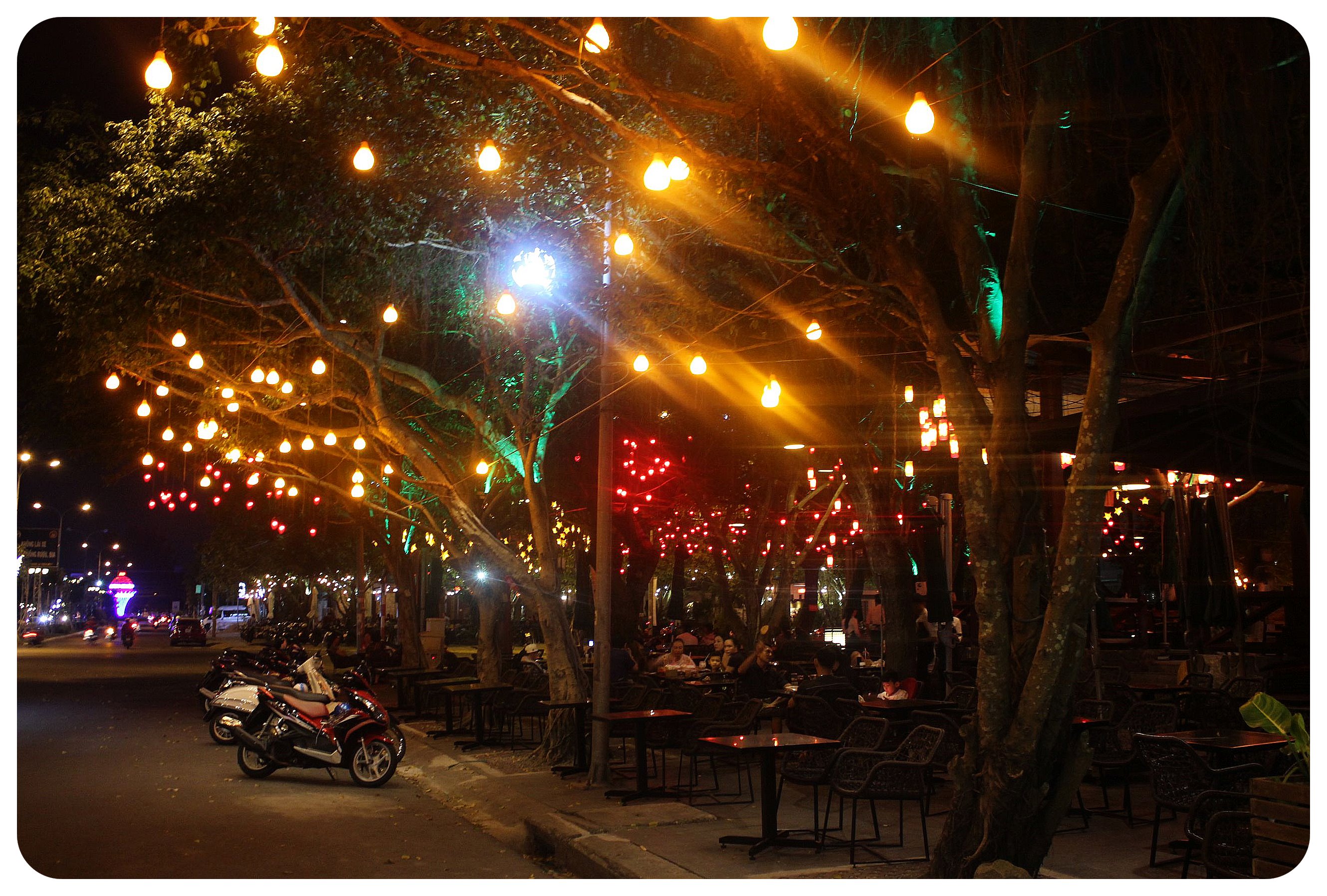 If you’re looking for something to do at night, head to Ton Duc Thang, which I walked all the way north from Lac Hong until I reached the bridge. I don’t know how many karaoke bars I’ve passed – it seems like people in Rach Gia take karaoke very seriously, considering the karaoke bars were all so big that from afar I assumed they were casinos. There are also a number of bars on this street were DJs were playing loud house music – the bars all felt like clubs to me, only that nobody was dancing. Instead, people were sitting around the tables, sipping beers and watching the DJs spinning records (can you still say that when they actually use a laptop?). 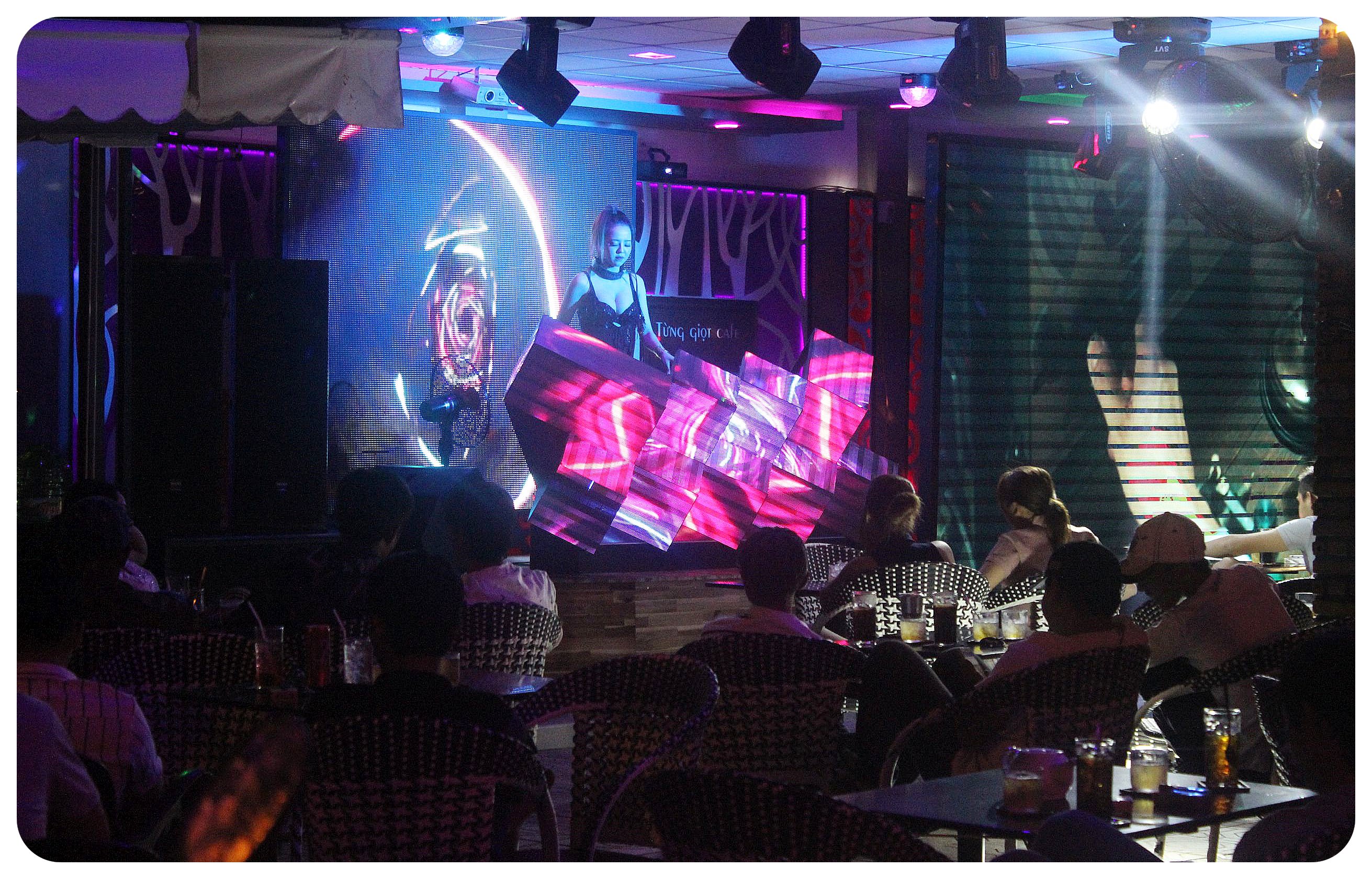 If you’re looking for a quieter place, head to Cafe Seaview, which is right across the street from the river front and in addition to coffee has a large food menu.

While I was out on my stroll, I walked by the Phuong Trang bus office to buy a ticket for the bus to Can Tho. According to Travelfish, they offer free hotel pickup which seemed too good to be true, but the lady in the ticket office confirmed that I’d be picked up the next morning at my hotel. We communicated entirely via GoogleTranslate – me typing questions into my phone and her typing her answers into her phone. I am starting to wonder how people traveled before everyone had a smartphone! How did I travel before I had a smartphone?! She didn’t speak a single word of English, my Vietnamese is limited to Hello and Thank You, and yet I was able to tell her when and where I wanted to go. 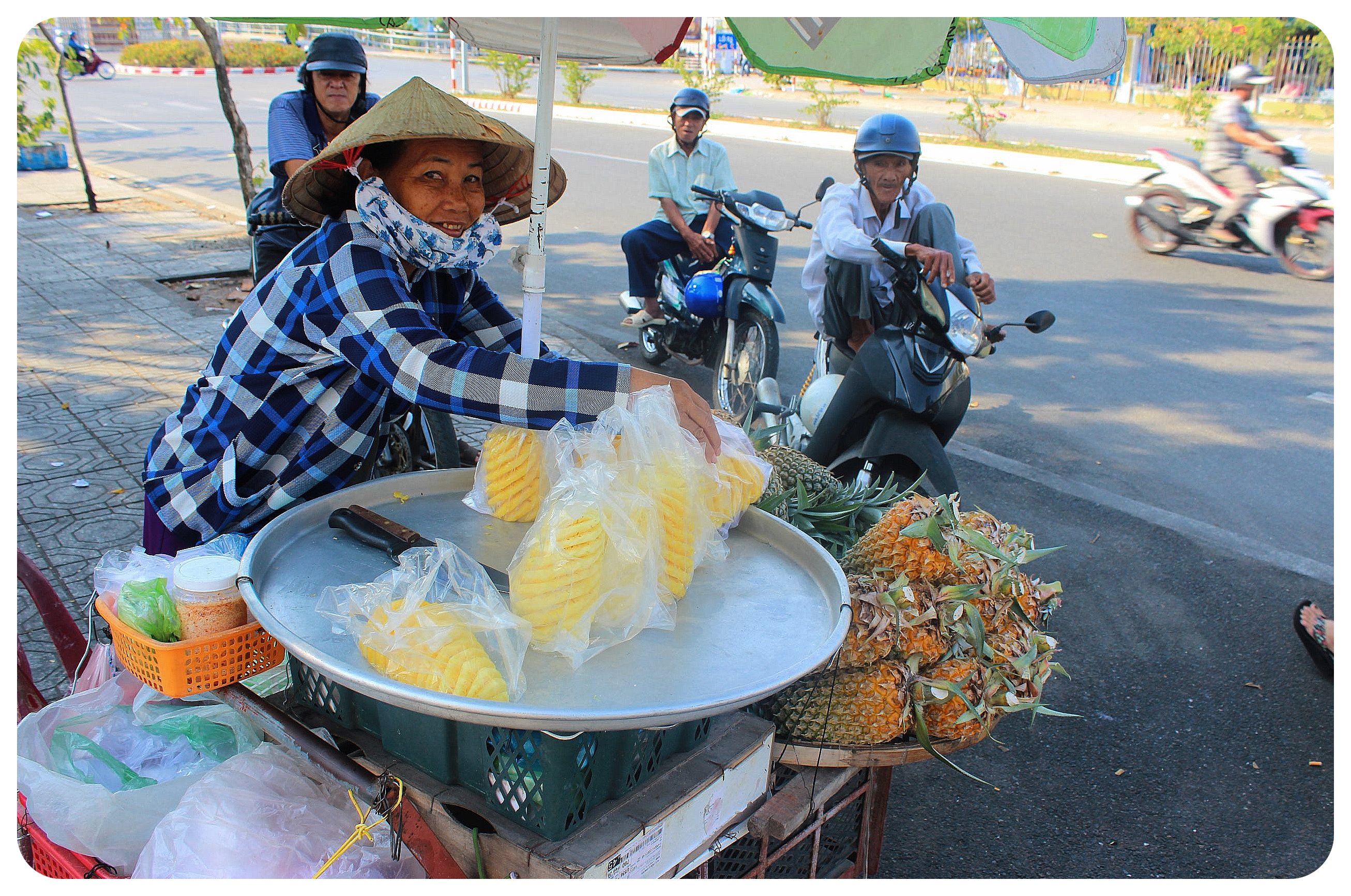 I would’ve happily spent another day in Rach Gia,but I was also excited for my next stop: the Mekong Delta, a place that’s been on my travel wish list for quite some time now. 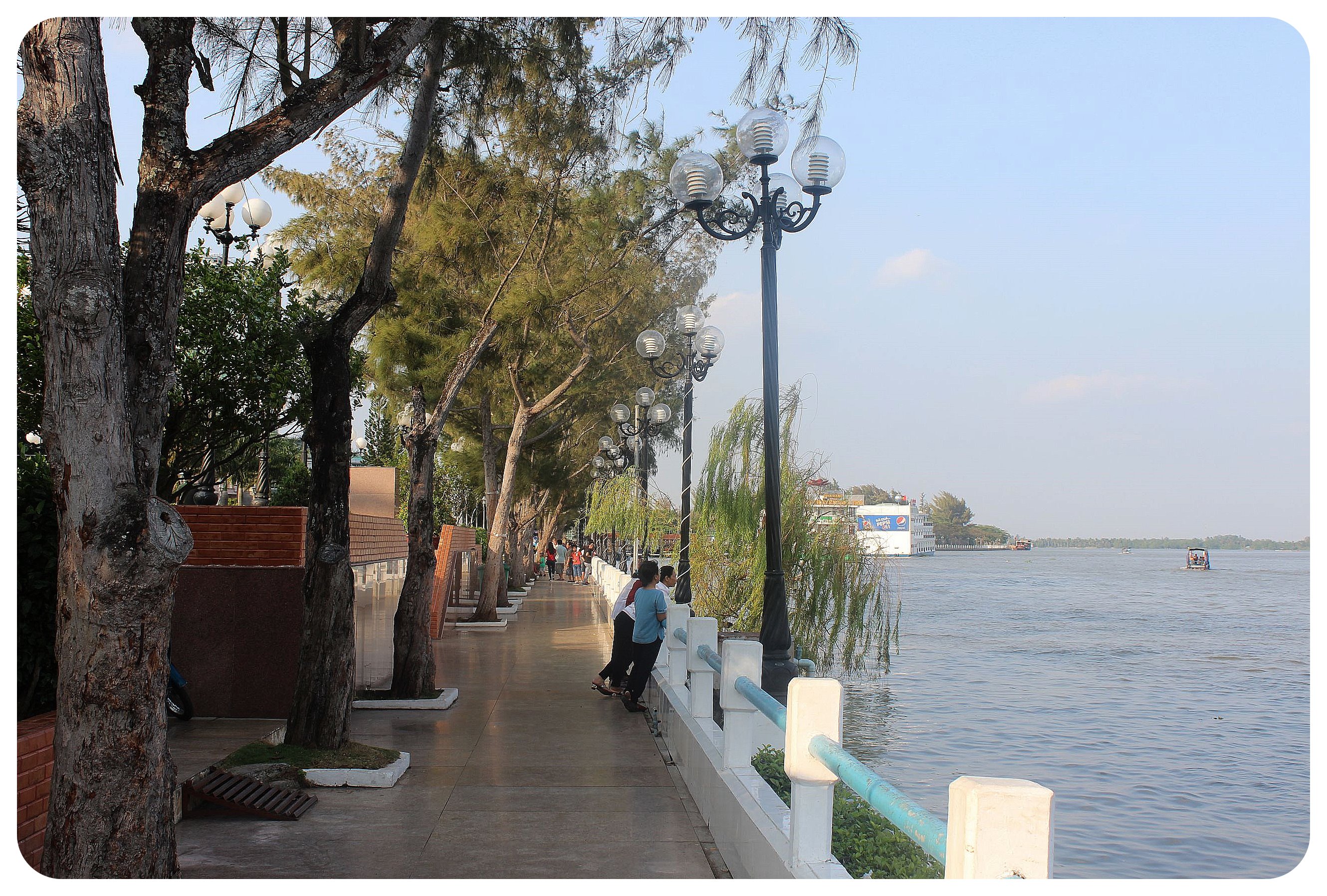 Buses to & from Rach Gia

If you’re taking the bus from Rach Gia, be aware that the bus station is in Rach Soi, just south of Rach Gia (it took me almost 25 mins from my hotel to get there).

I used Travelfish.org for bus schedules and companies, and you can also find ferry information on Travelfish.

The Ferry from Rach Gia to Phu Quoc

There are several ferries per day from Rach Gia to Phu Quoc – passenger ferries as well as car ferries, slow ferries and fast ferries. You can find a good overview over ferry times and ferry prices here. 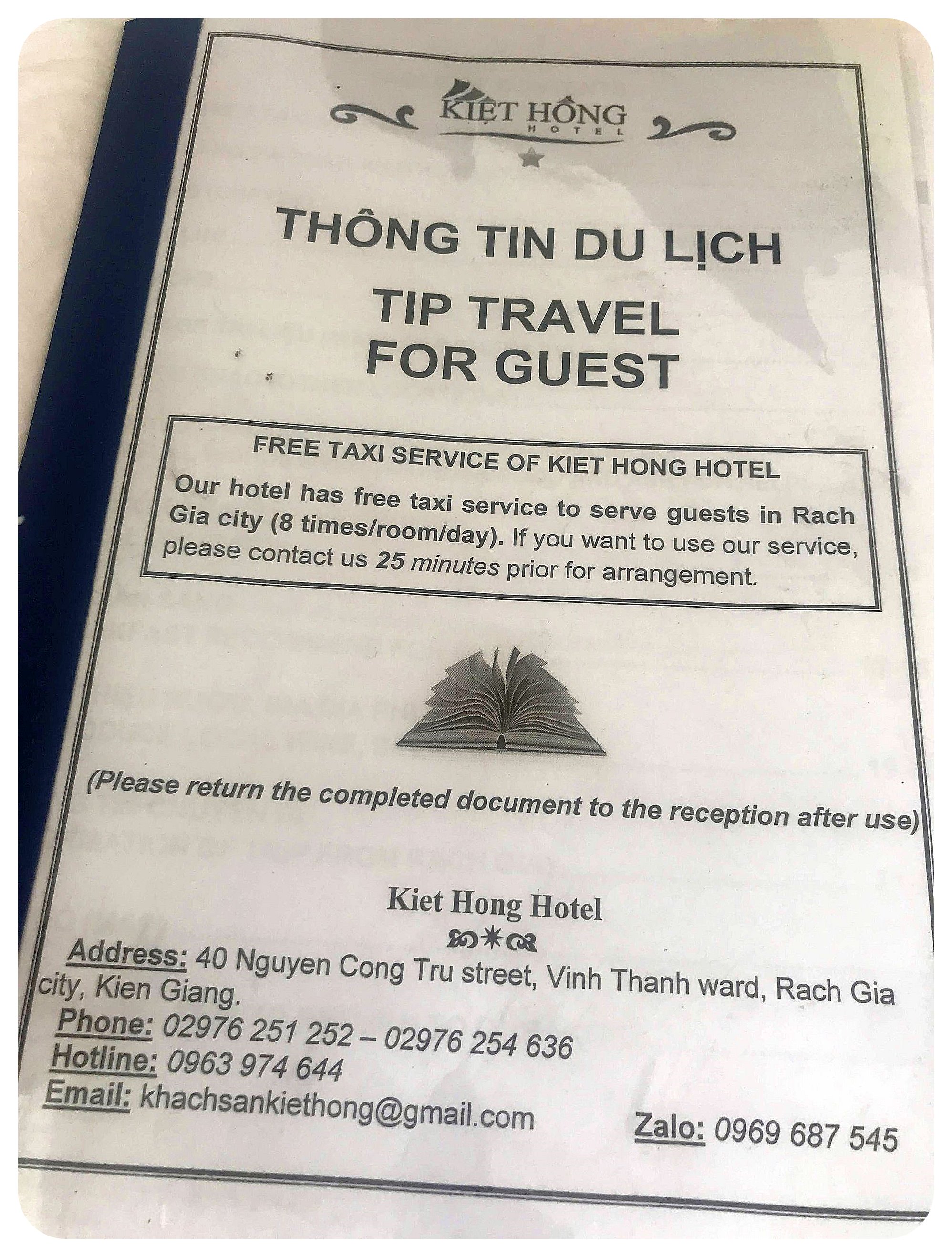 Where to stay in Rach Gia

When I visited Rach Gia, there were no hostels in town, but since my visit, a hostel opened, and it looks great: 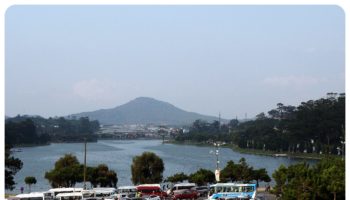 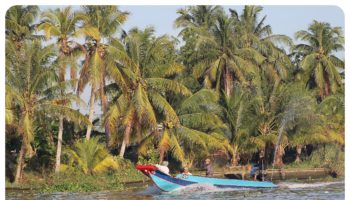 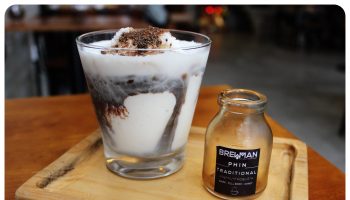 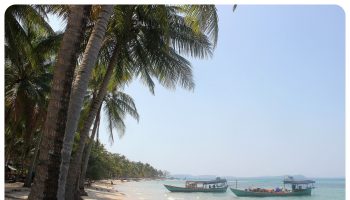 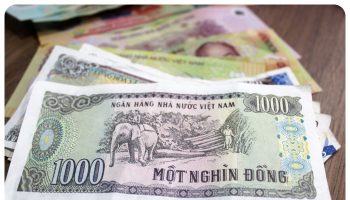