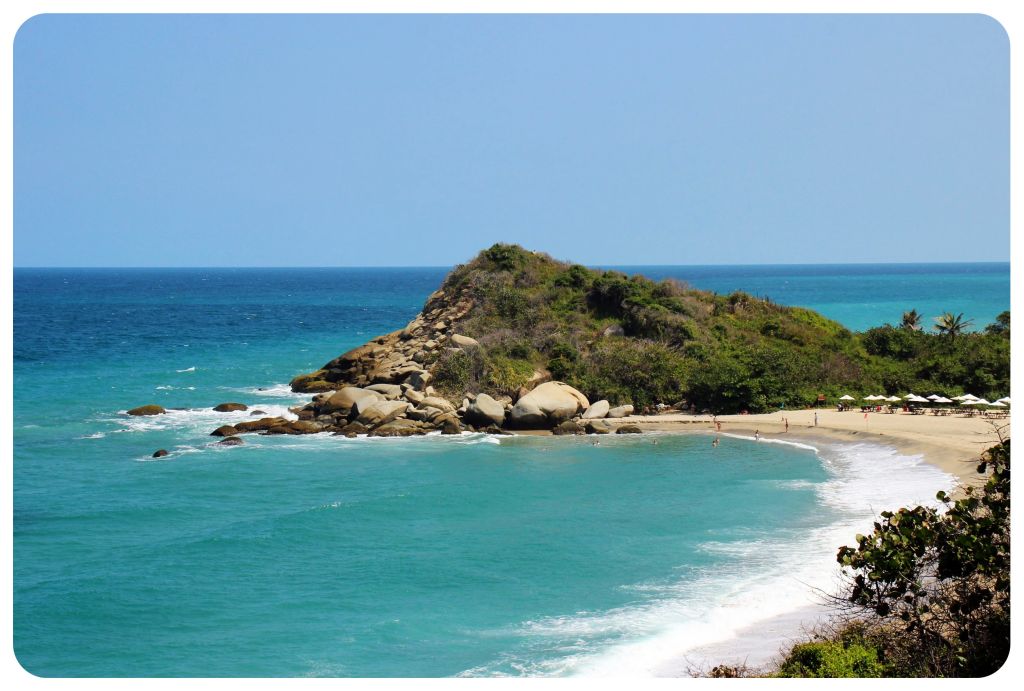 I loved Cartagena, but phew, that city was hot! To escape the heat, we decided to head further east along the coast. We had heard glorious tales about breathtaking Caribbean beaches – exactly what we needed to cool off. 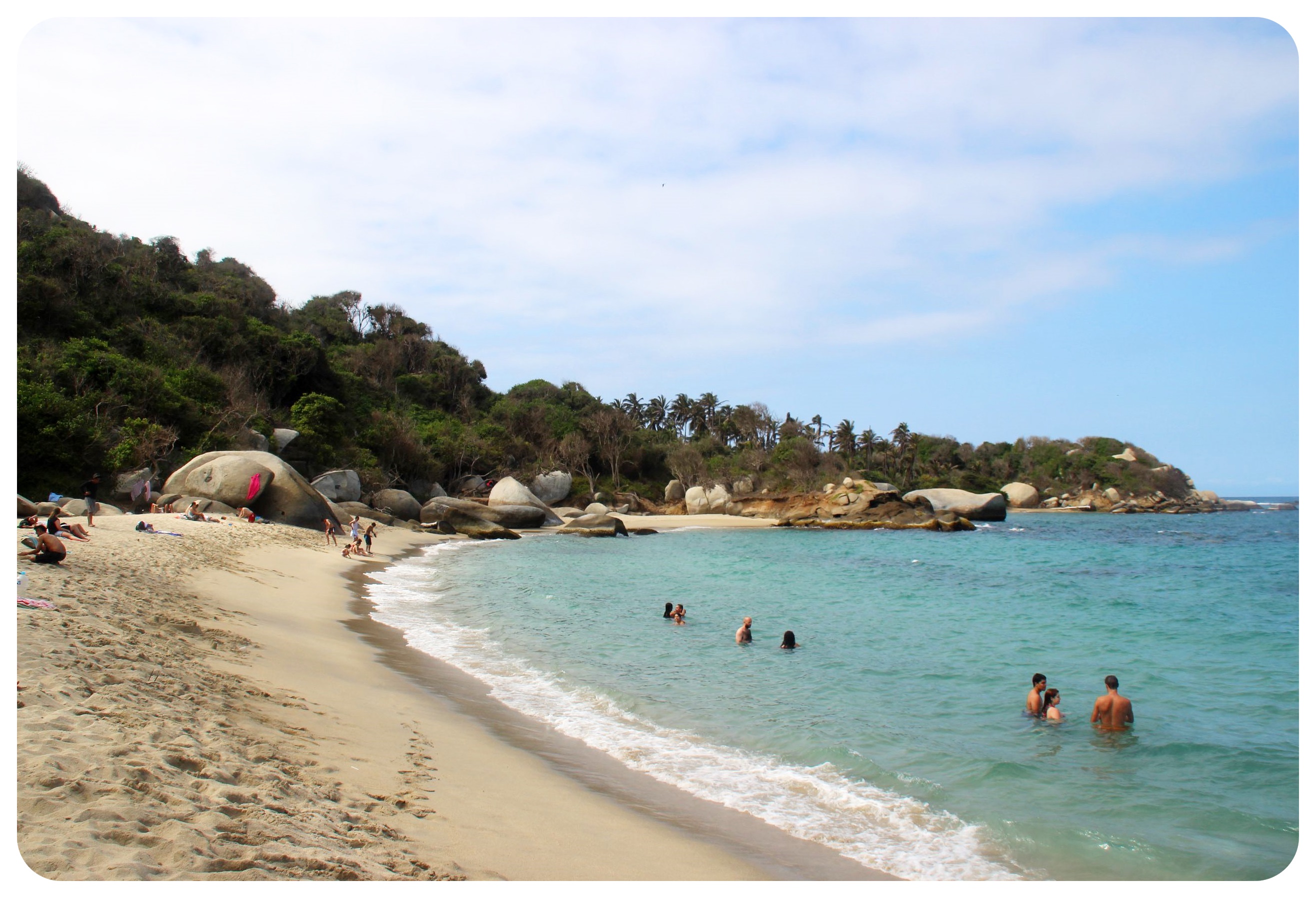 One place that came up over and over again in travel guides and on blogs was Tayrona National Park, one of Colombia’s most popular national parks. The park stretches along the Caribbean coast and into the foothills of the mountains of the Sierra Nevada de Santa Marta, covering 12,000 hectares of land and 3,000 hectares of sea. 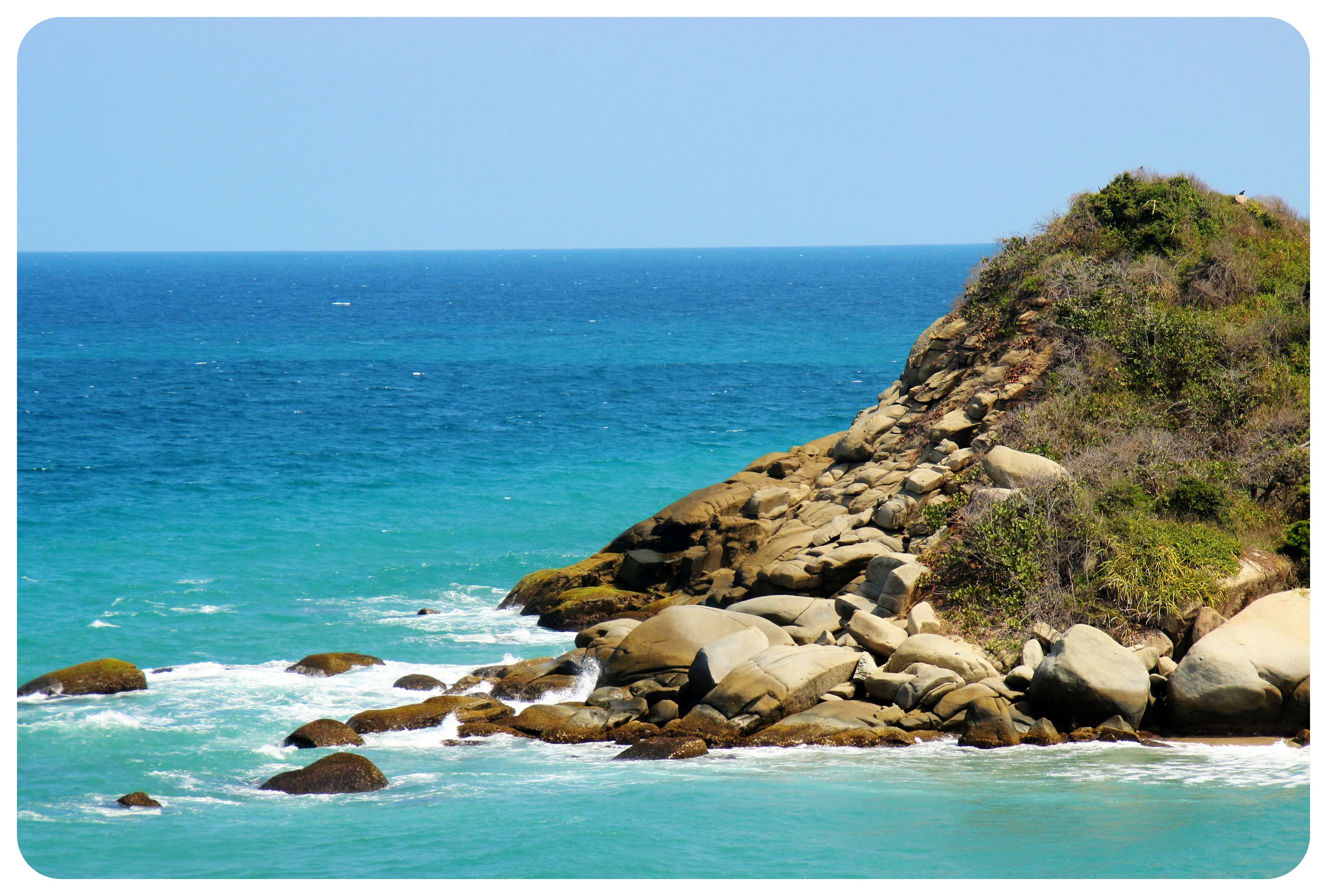 Tayrona has several beaches, but is also famous for its wildlife and jungle hikes, including a full-day hike to El Pueblito, the ruins of a small historic village similar to the nearby ‘Lost City’ (which is the five day trek through the jungle that I set off on a few days later). 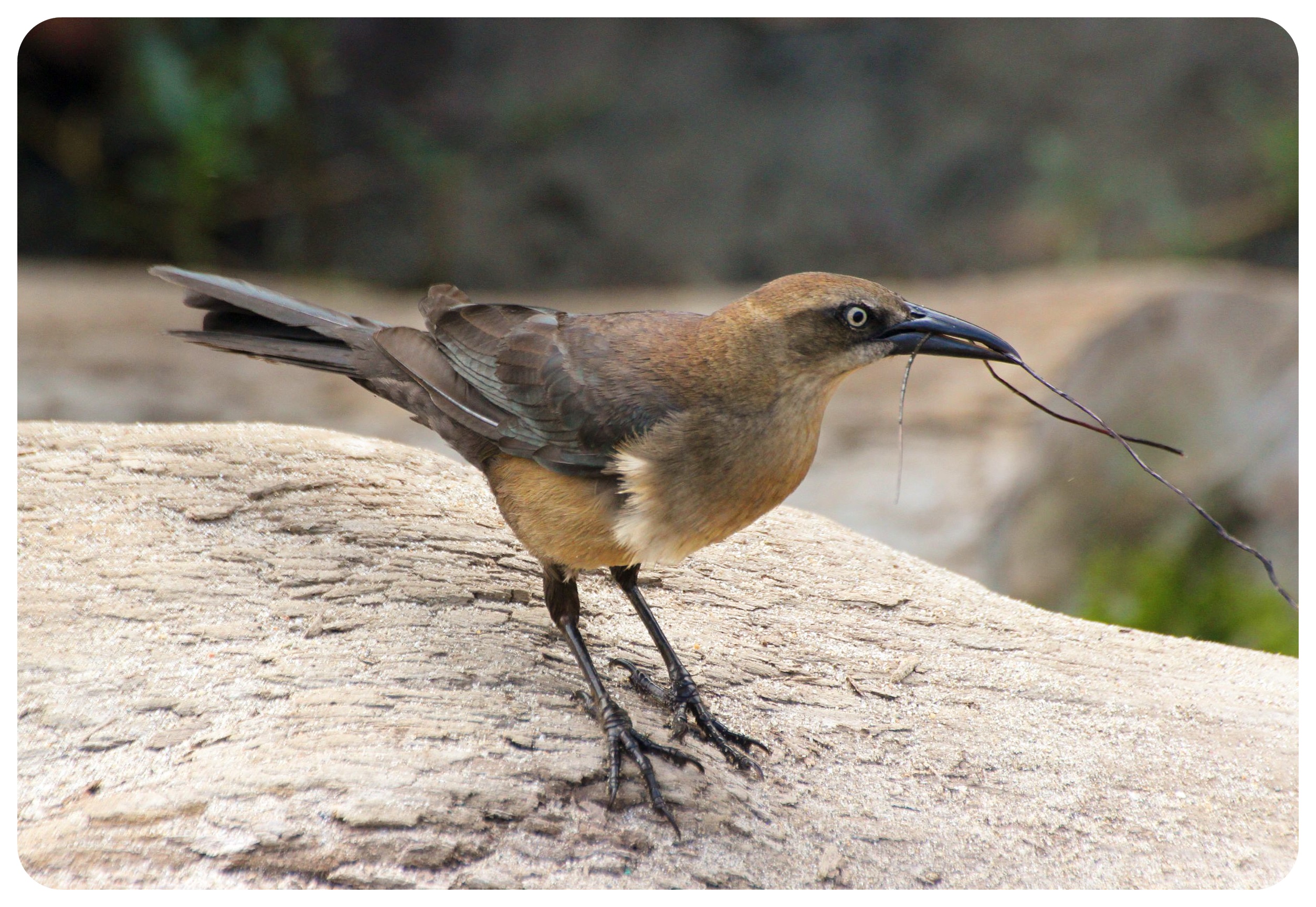 We hemmed and hawed about spending the night in the park – we thought that paying the entrance fee of COP39,500 would be worth it only if we spent a couple of days there. If you plan to spend the night, you don’t even need to bring your own tent – there are several camp grounds in the park where tents are already set up, all you need to do is bring a sarong, sunscreen, a change of clothes and toiletries and you’re good to go. There are even hammocks that you can rent, set up in rows of tens next to each other under a giant mosquito net. 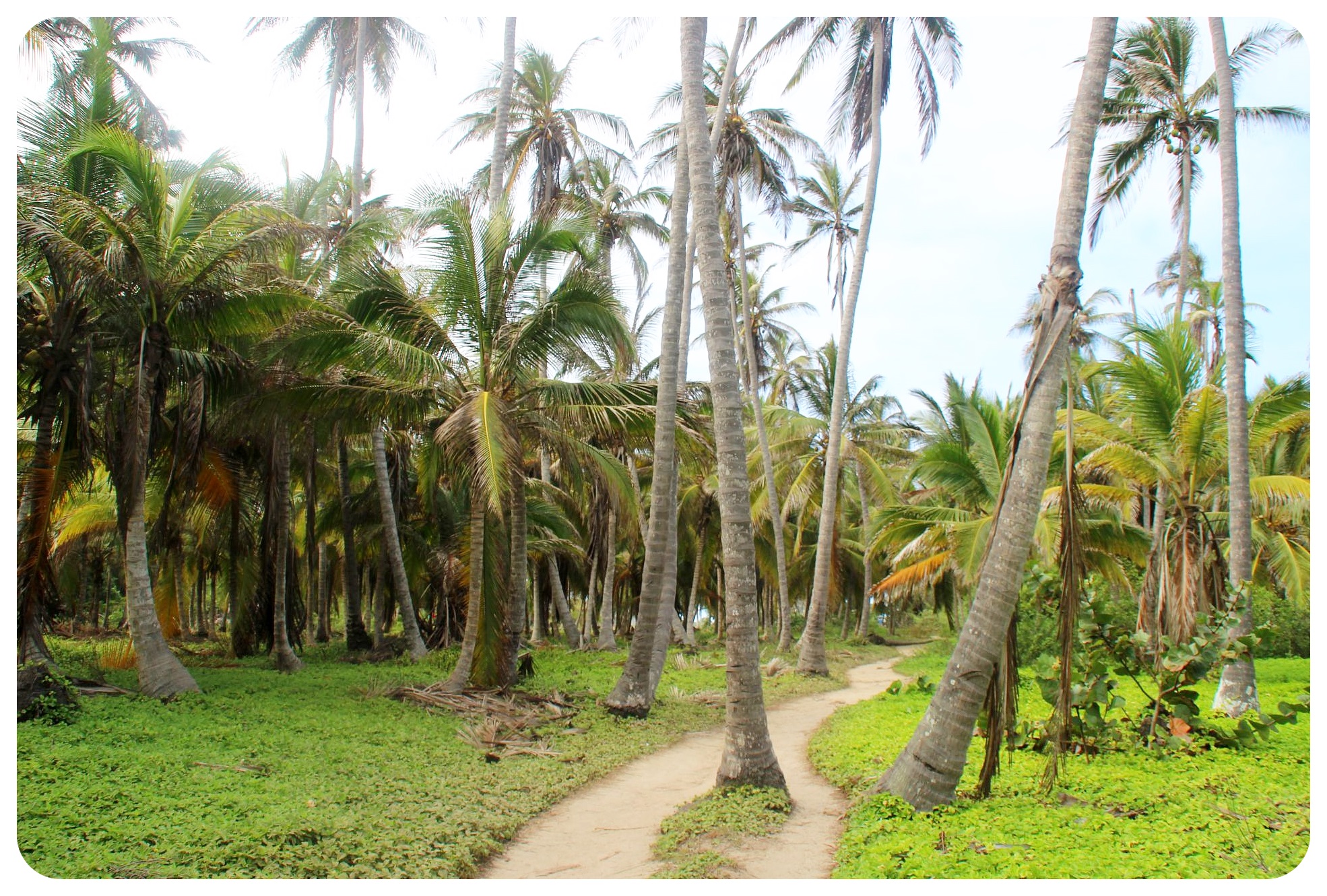 While that sounded easy enough, the stories of roaches and bugs (including bed bugs!) in some of the hammocks and tents, combined with very basic washing facilities, sounded less appealing. In the end, we decided to visit the park just on a day trip and to return at night to the comforts of our private room and the inviting swimming pool at our hostel in Santa Marta. 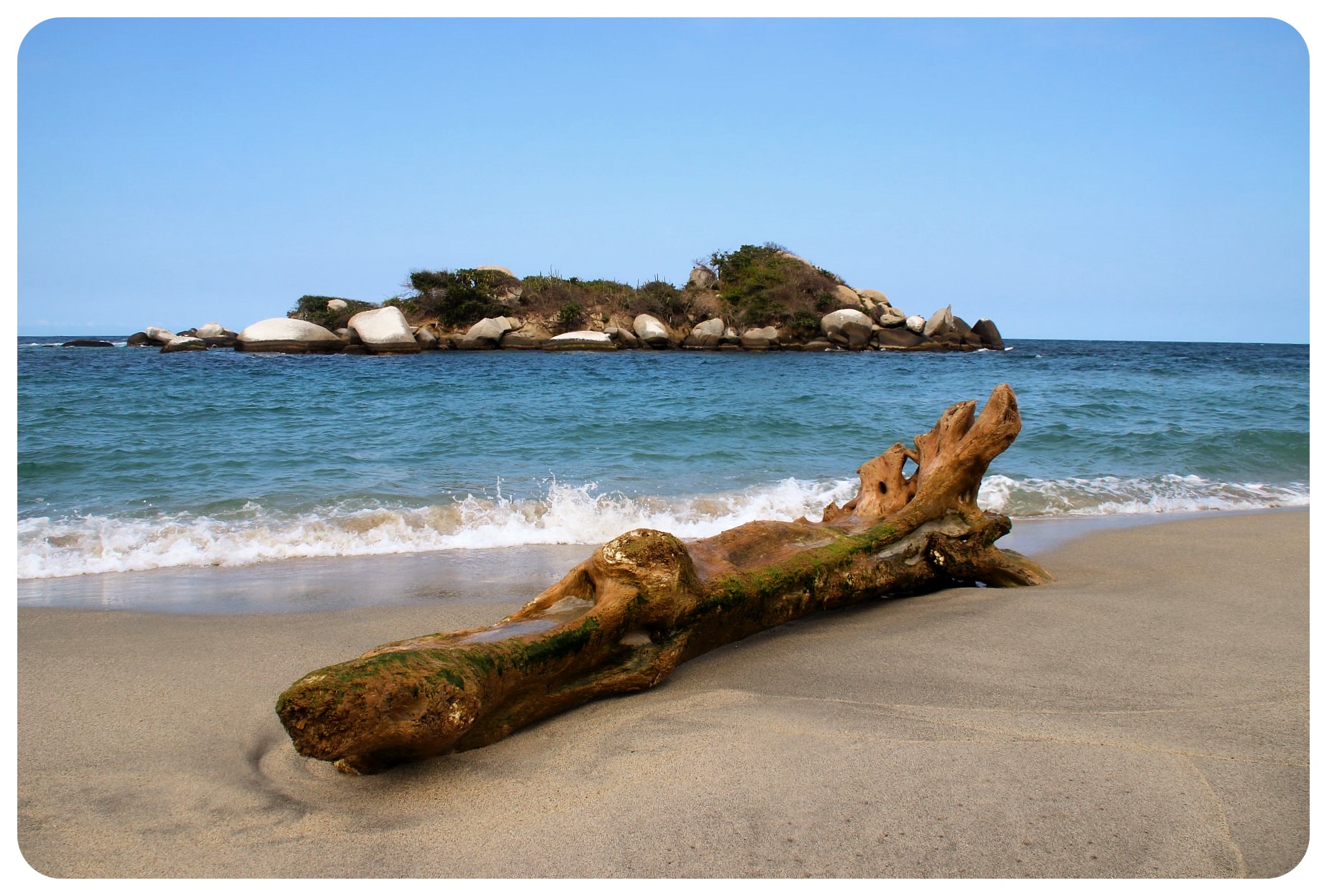 After seeing the campgrounds, where the tents were basking in the sun in 90+℉ heat all day, I was happy with that decision, but I can’t deny that it would have been a pretty amazing experience to wake up to the sound of the jungle as the sun rises in the morning, then heading straight from my hammock to the beach for a morning swim. 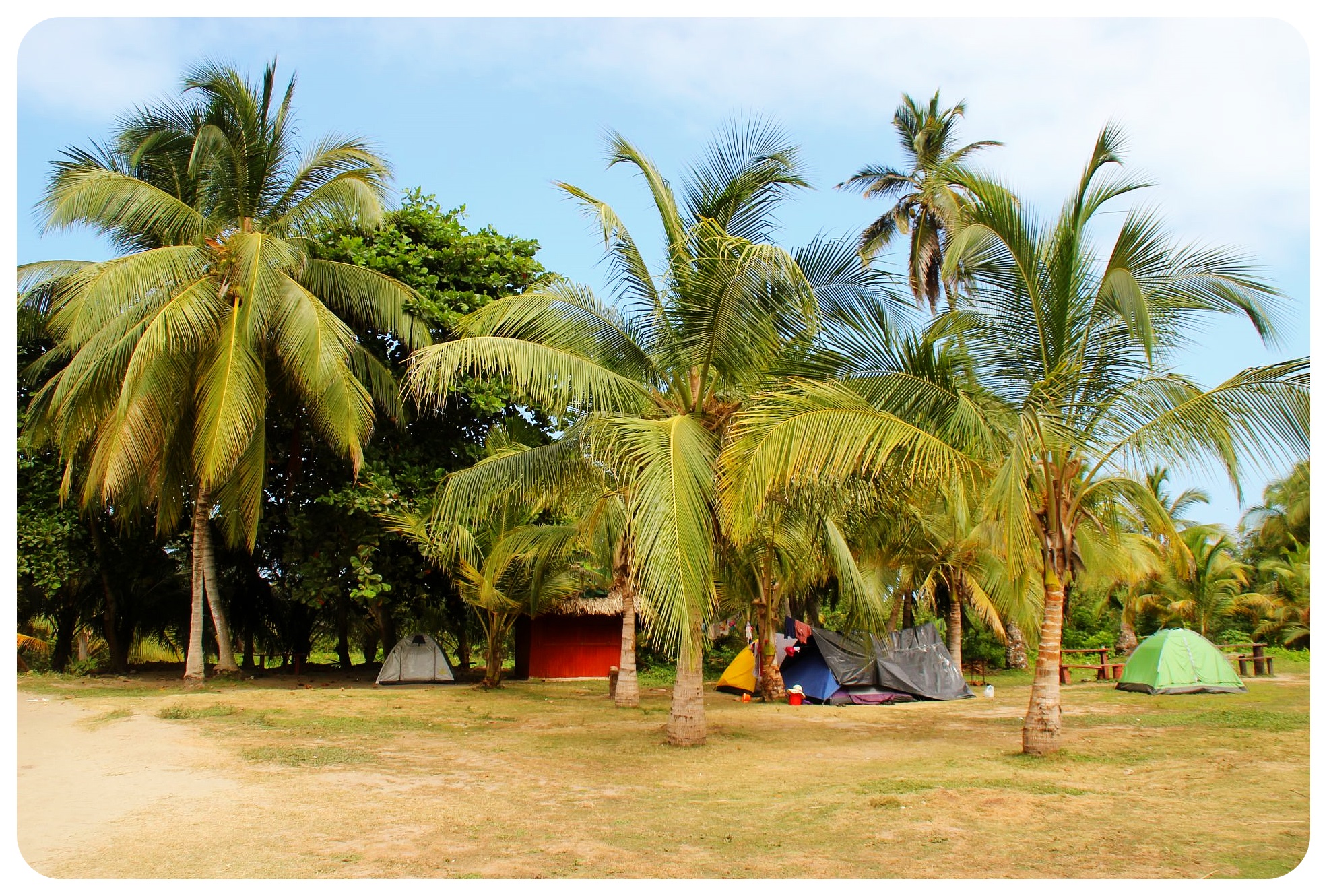 Although – that morning swim can’t be enjoyed everywhere – I was surprised to see that most of the long, wide sand beaches had red flags and insanely intense waves – the current is too strong to even allow for a dip in the ocean. There were a couple of smaller beaches that were in little bays, protecting them from the open water, but because of the lack of ‘swimming beaches’, these were pretty crowded. 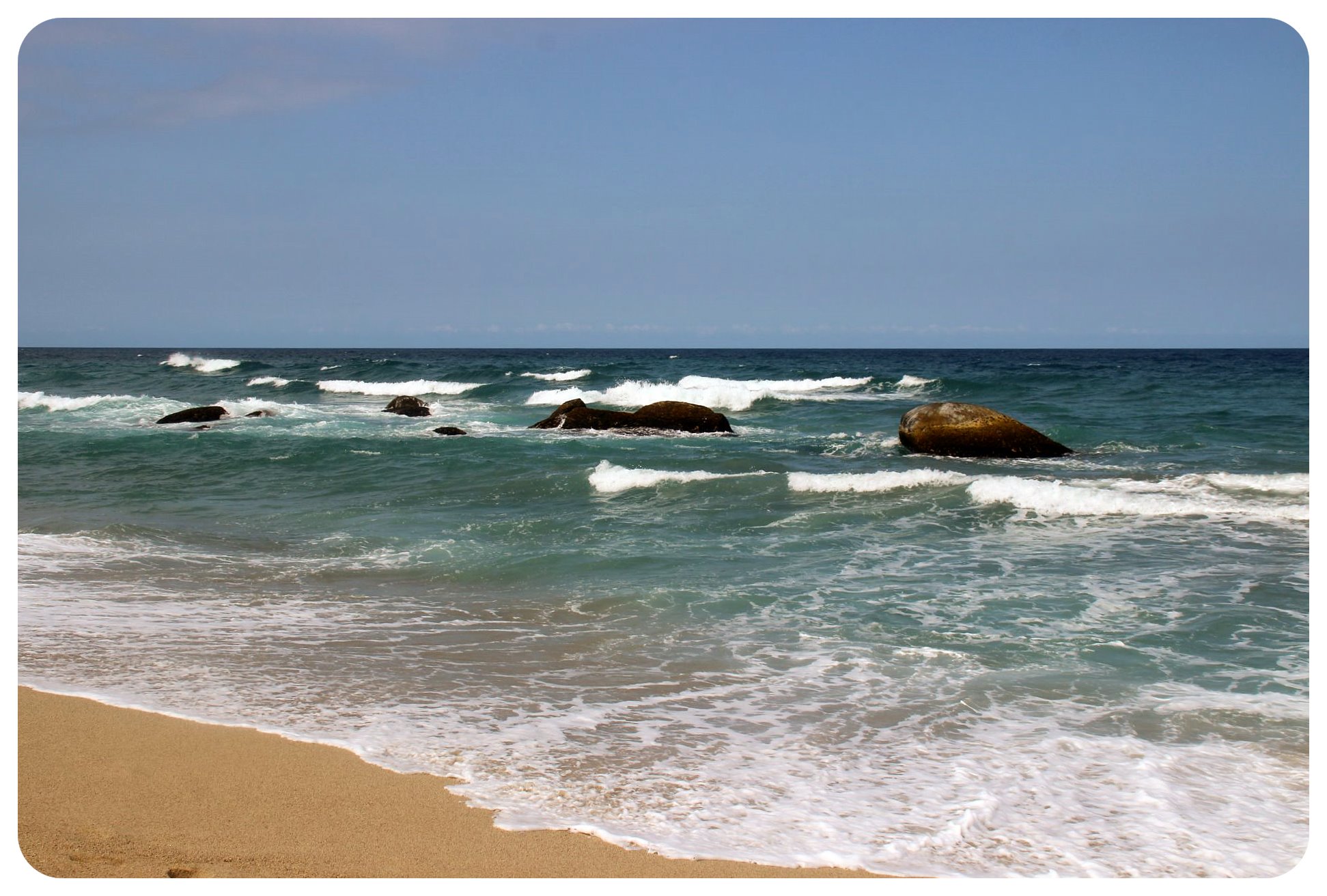 But to get to these beaches, you first have to go on a jungle hike. Just before leaving for the park I found out that it is a one to two hour hike from the park entrance to the beaches. And the hike is pretty intense. I consider myself a seasoned hiker but even I got tired from the ups and downs of the trail, steps, rocky parts and sandy paths that we followed towards the beaches. 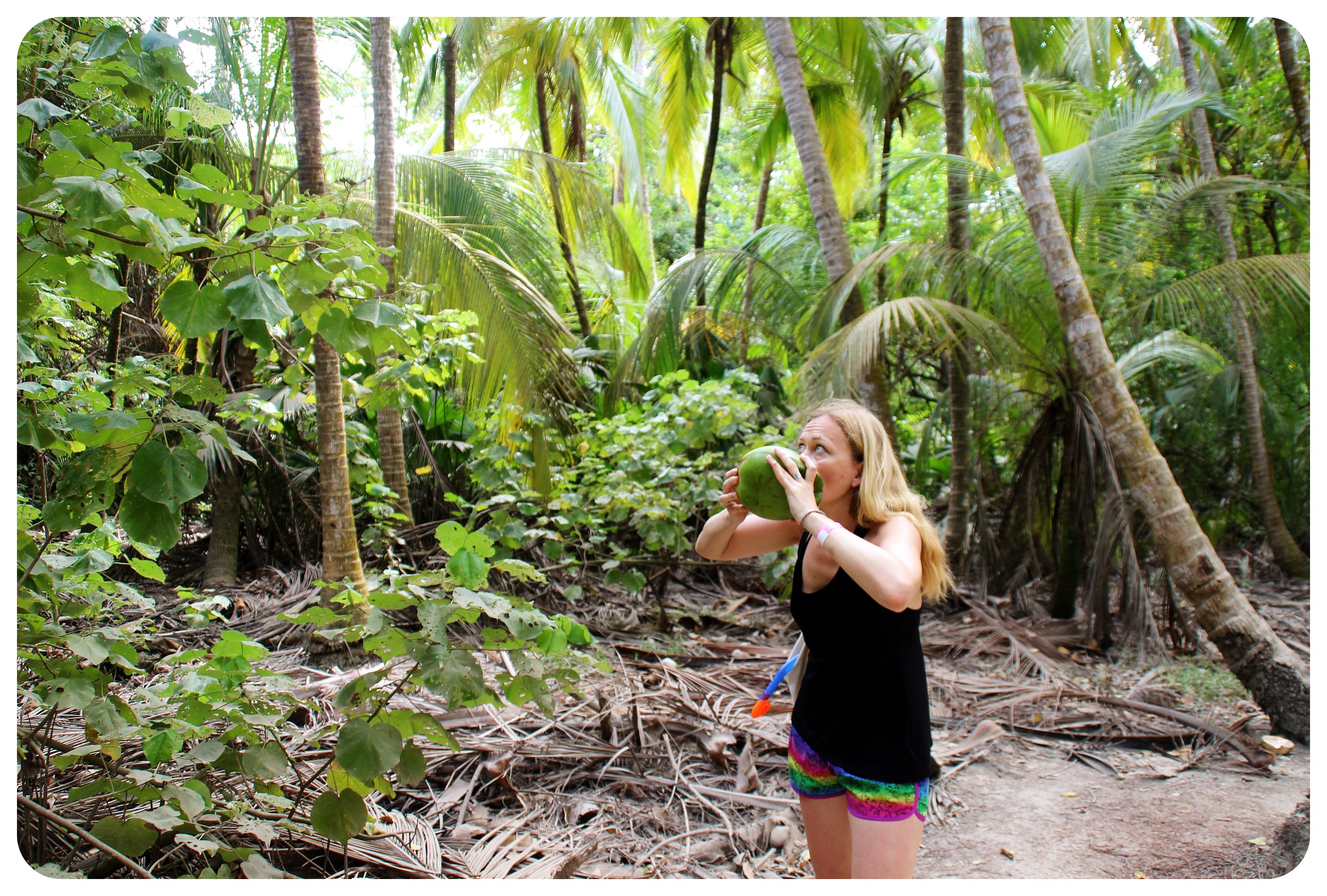 I was hoping that I’d be rewarded with wildlife spottings but not a single monkey showed itself, no armadillo crossed the path in front of us, not even birds peeked out of the woods. There are 56 endangered species in the National Park, however, almost all of them hidden deep within the jungle. 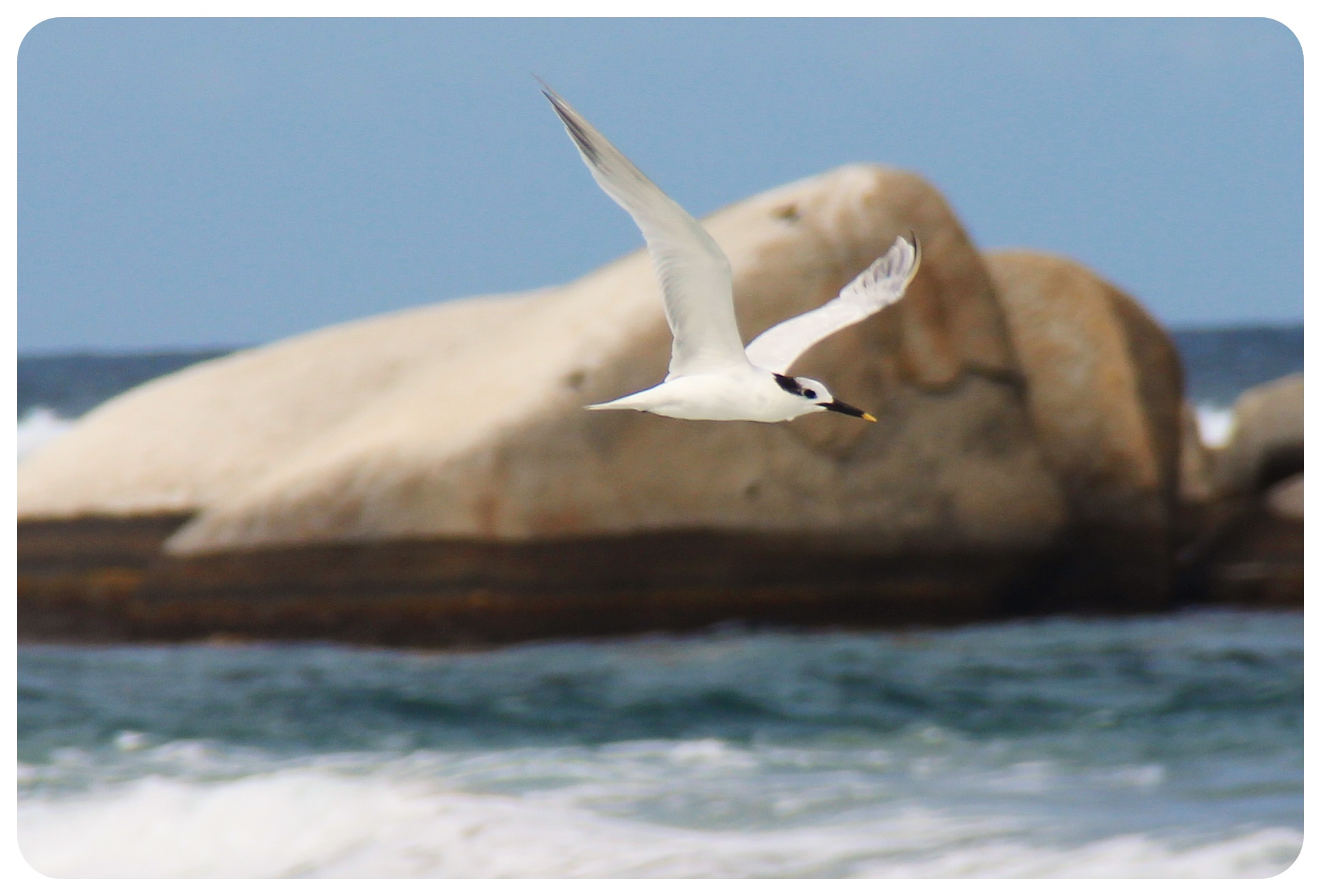 Since we didn’t see any wildlife, our expectations for the beaches grew and grew as we marched through the jungle setting, hearing the ocean roar in the distance. Seeing the giant waves and red flags when we finally got there after nearly three hours (we stopped to take photos along the way and for a fruit shake at one of the camp grounds) was somewhat disappointing, but nonetheless I enjoyed the hike through the lush, tropical greenery. 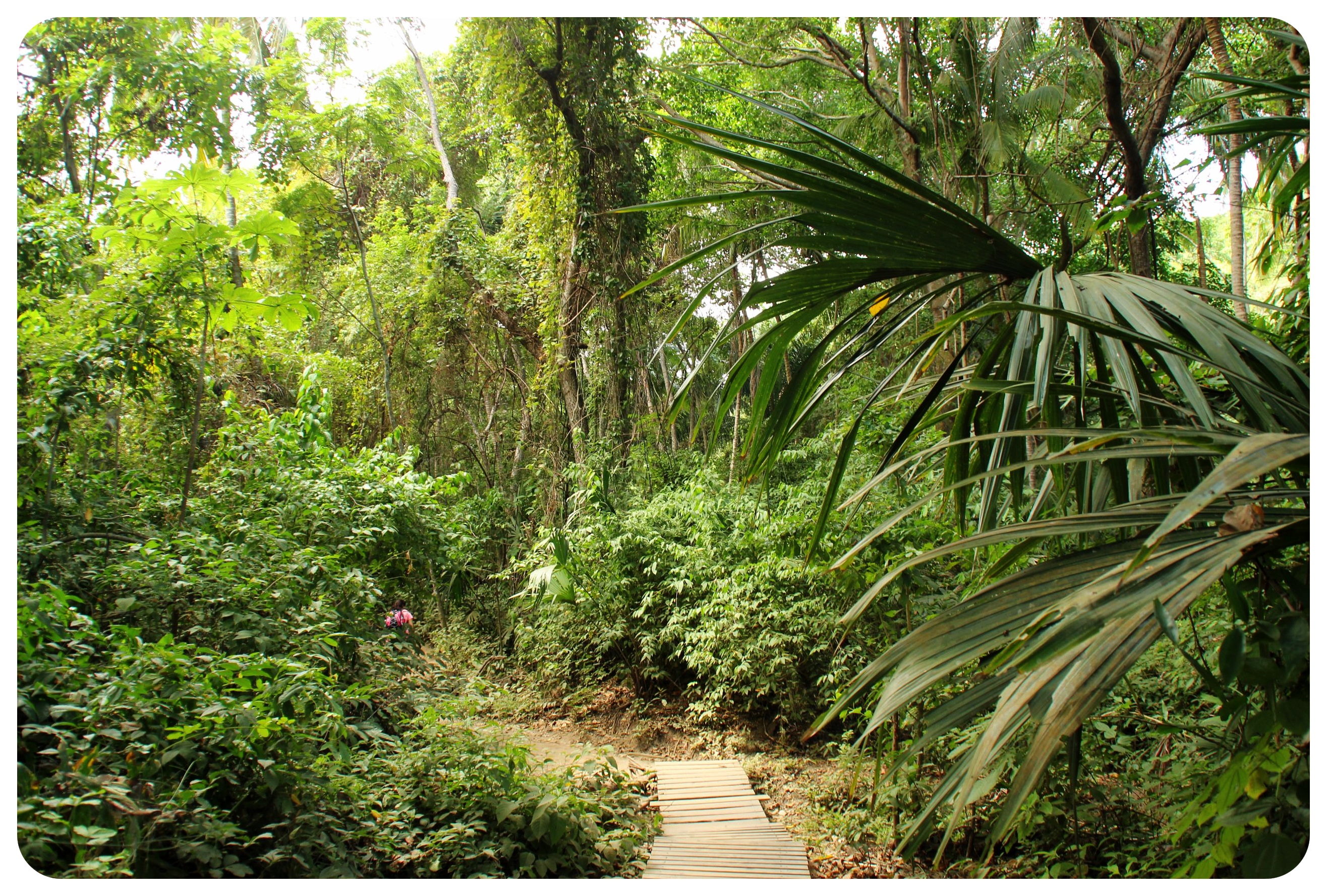 But I am also spoiled, having seen so many stunning beaches around the world, so others might be more impressed than I was. I think if you’re coming down from Central America, you will have seen similar scenery and nicer beaches in Costa Rica, but if this is your first encounter with tropical jungles, you’ll appreciate Tayrona. 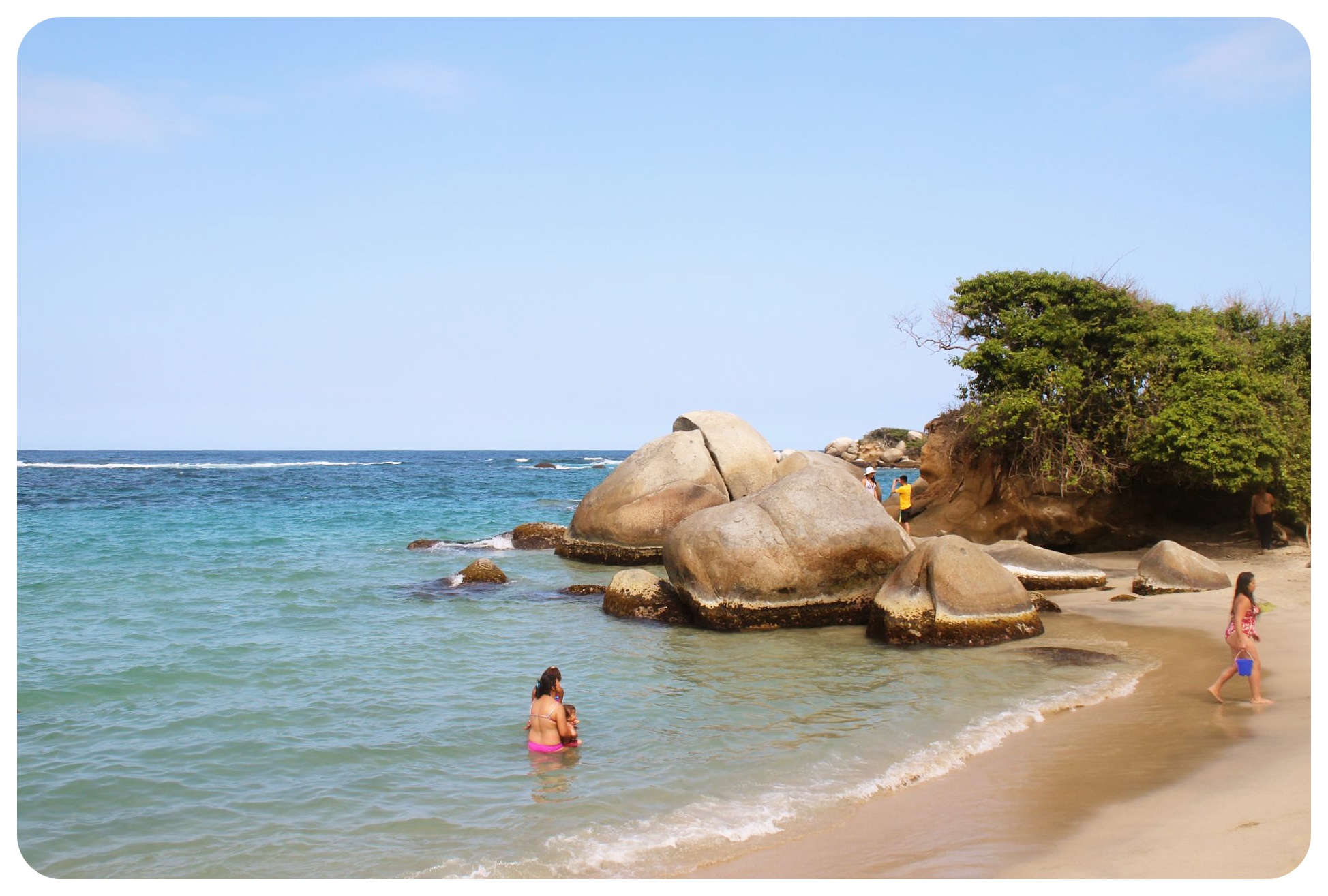 As far as beaches go, I personally preferred Bahia Concha (Shell Bay). This beach also belongs to Tayrona National Park, but is located on its far western side, reached through a different entrance. We took a shared taxi from Santa Marta there which is the only way to reach Bahia Concha as there are no public buses, and whereas Tayrona was overrun by foreigners, this was much more of a local beach – we were almost the only foreigners, the rest were Colombian beach goers. 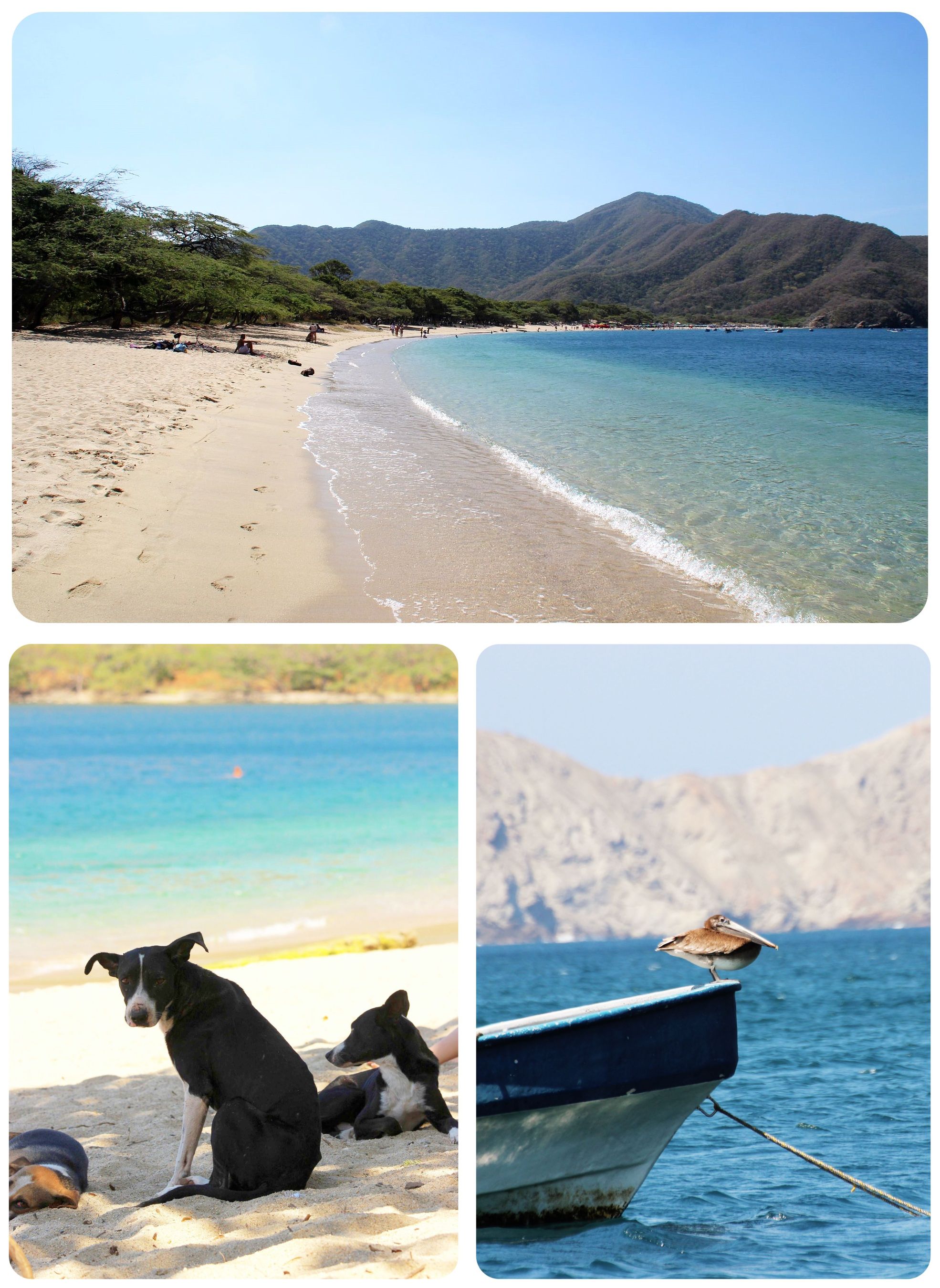 How to Visit Tayrona National Park

If you’re staying in Santa Marta, you can take a bus to Tayrona for COP7,000 (US$2.40), which takes about an hour. At the entrance to the park, there are small minivans that bring you to the trail heads (COP3,000/around US$1). I recommend taking them or you’ll add an extra five kilometers to your hike.

If you’re only visiting for the day, make sure to get there early to make it worthwhile. Calculate around five hours of hiking time.

Note that May, June and September to November are the wettest times – if you are visiting Colombia’s Caribbean coast during those periods, you’re likely to encounter lots of rain and muddy trails. December to February are high season months – during this time, you might have trouble finding a free tent/hammock, so arrive early if you’re planning to spend the night, or bring your own tent.

Most (if not all) hostels in Santa Marta offer luggage storage for several days, so you don’t need to bring all of your stuff with you if you are planning to spend a few days in Tayrona. 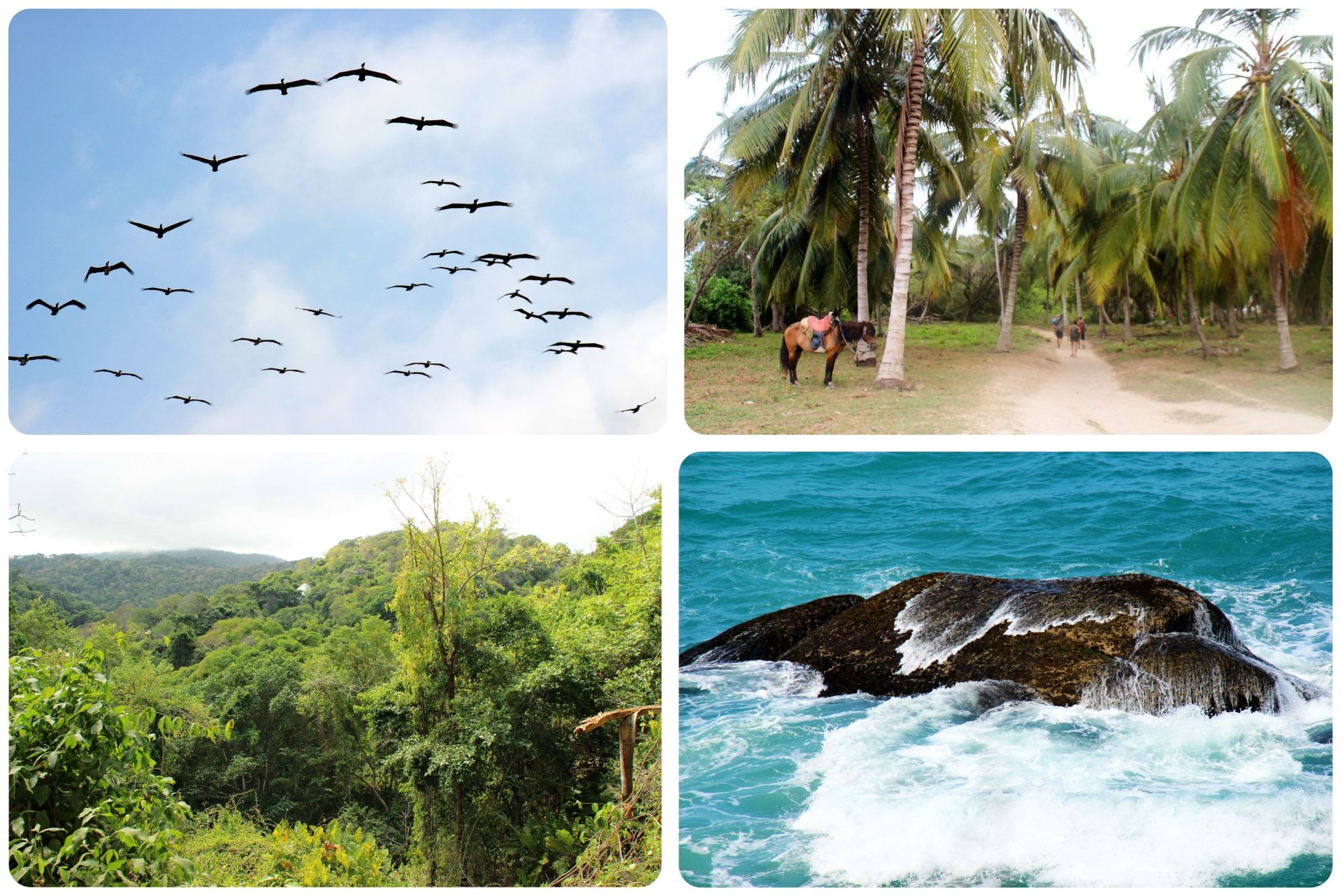 For more information on Tayrona National Park, check out these posts which helped me plan my own trip: 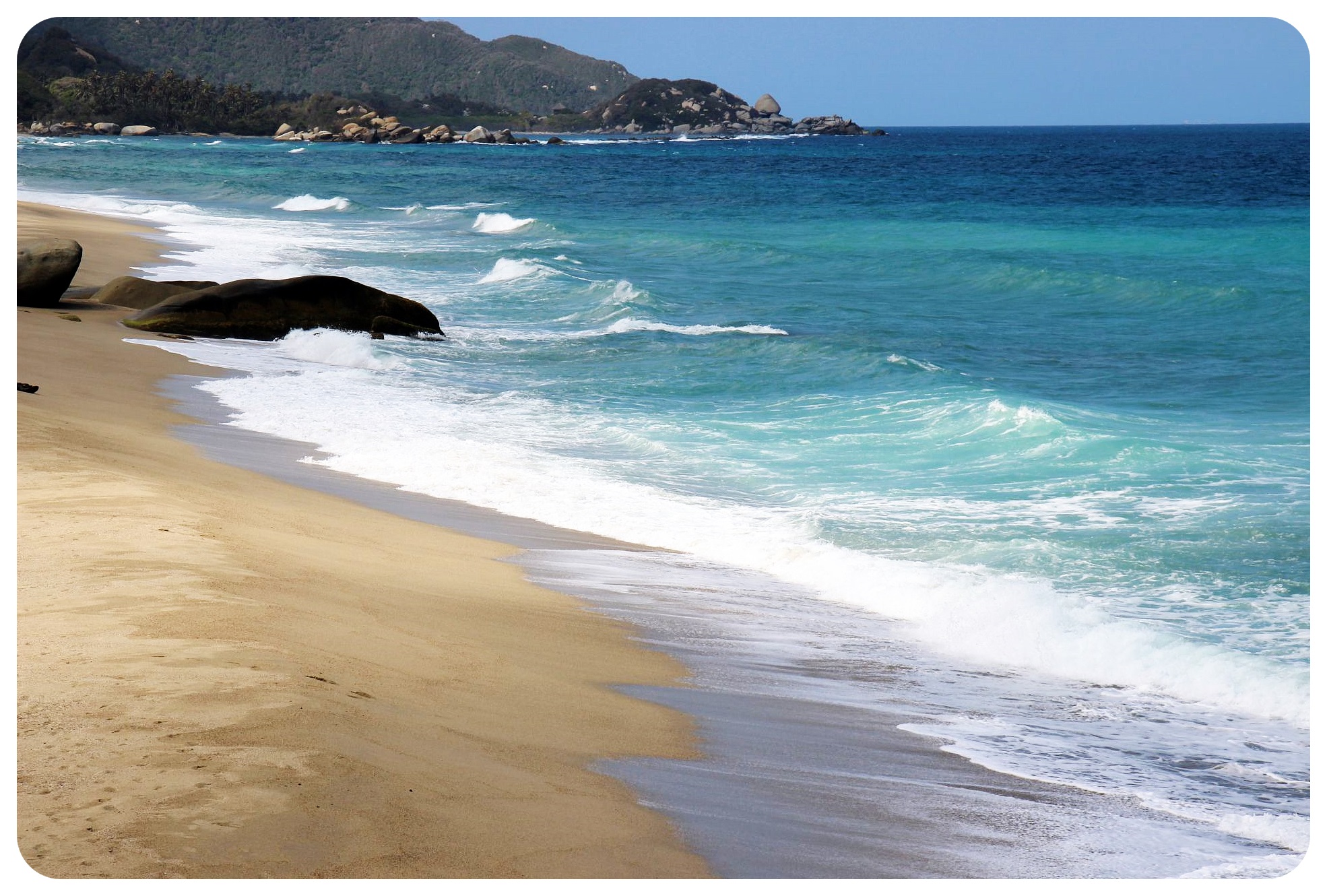 How To Visit To Bahia Concha

Take a taxi from Santa Marta, which costs about COP40,000-50,000 /US$14-17 (best to negotiate a price before you get in). Admission to the beach is COP5,000 per person. There are several smaller restaurants near the parking lot, but the waiters also bring food to the far end of the beach. As for drinks and ice cream: there are a bunch of vendors walking around with coolers, all reasonably priced (a beer was COP5,000 /US$1,70) 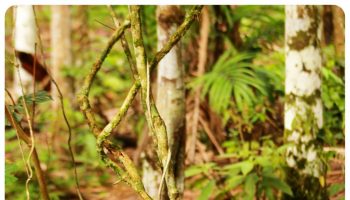