I went to Bohol for precisely one reason. This: 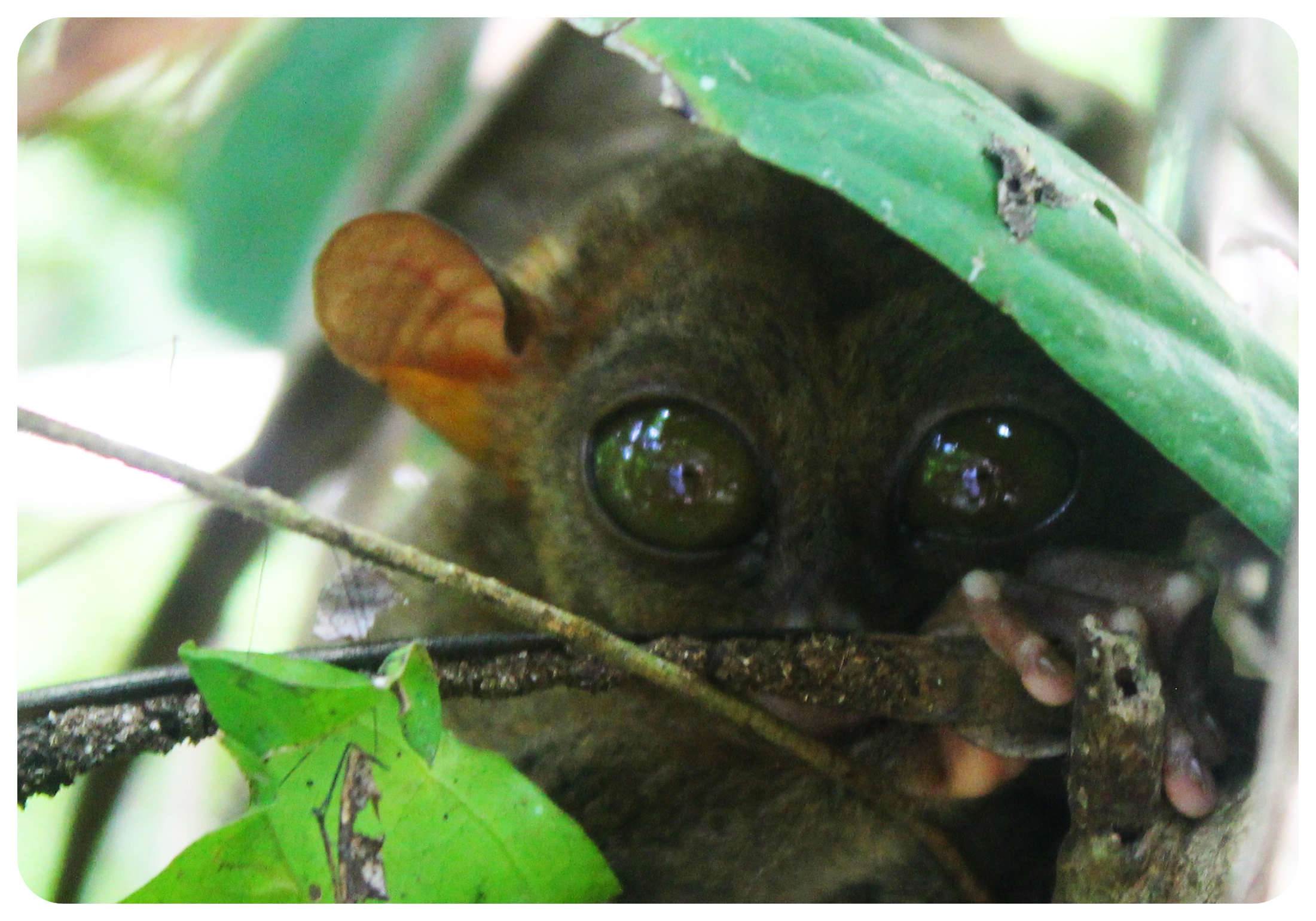 I mean.. Look at this little guy! Can you see why? They remind me of mini-gremlins, but apparently they inspired Stephen Spielberg to make E.T. look the way he looks.

It was a quick detour for me, because even though there are some beaches and smaller islands like Panglao Island around Bohol, the main attractions are the tarsiers and the Chocolate Hills. The beaches seem nice but I didn’t meet anyone who was raving about them, which is why I saved my beach time for Siquijor, my next stop. 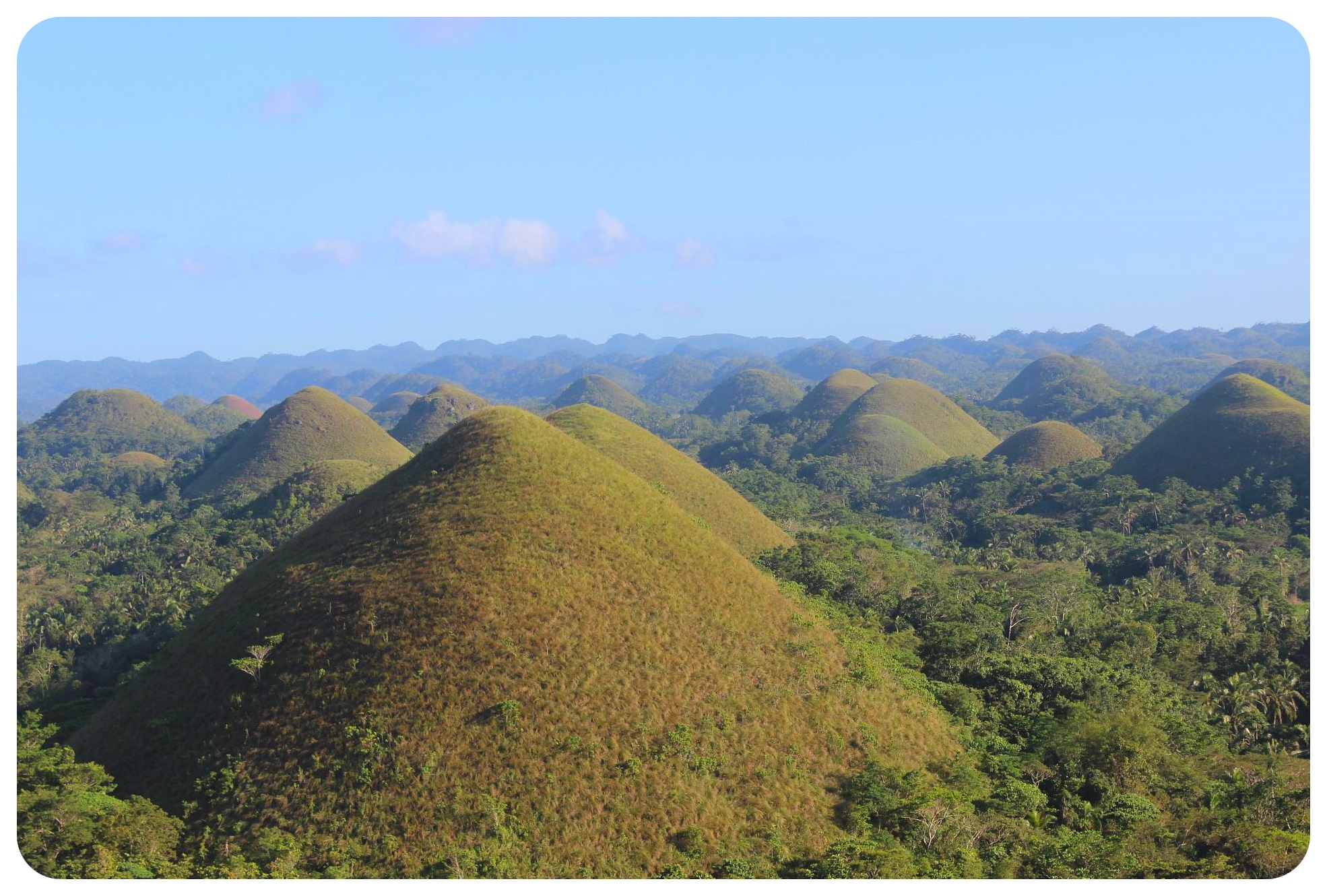 Bohol is the 10th largest islands in the Philippines, and despite the beaches, beautiful scenery and tarsiers (!), it is somehow not part of the main tourist circuit. For me, Bohol was the first island where I got to see what life in the Philippines is like – not a party island that caters primarily to tourists, and my first Filipino city that is not the capital (Manila seems like a completely different world compared to Tagbilaran, the main city on Bohol). 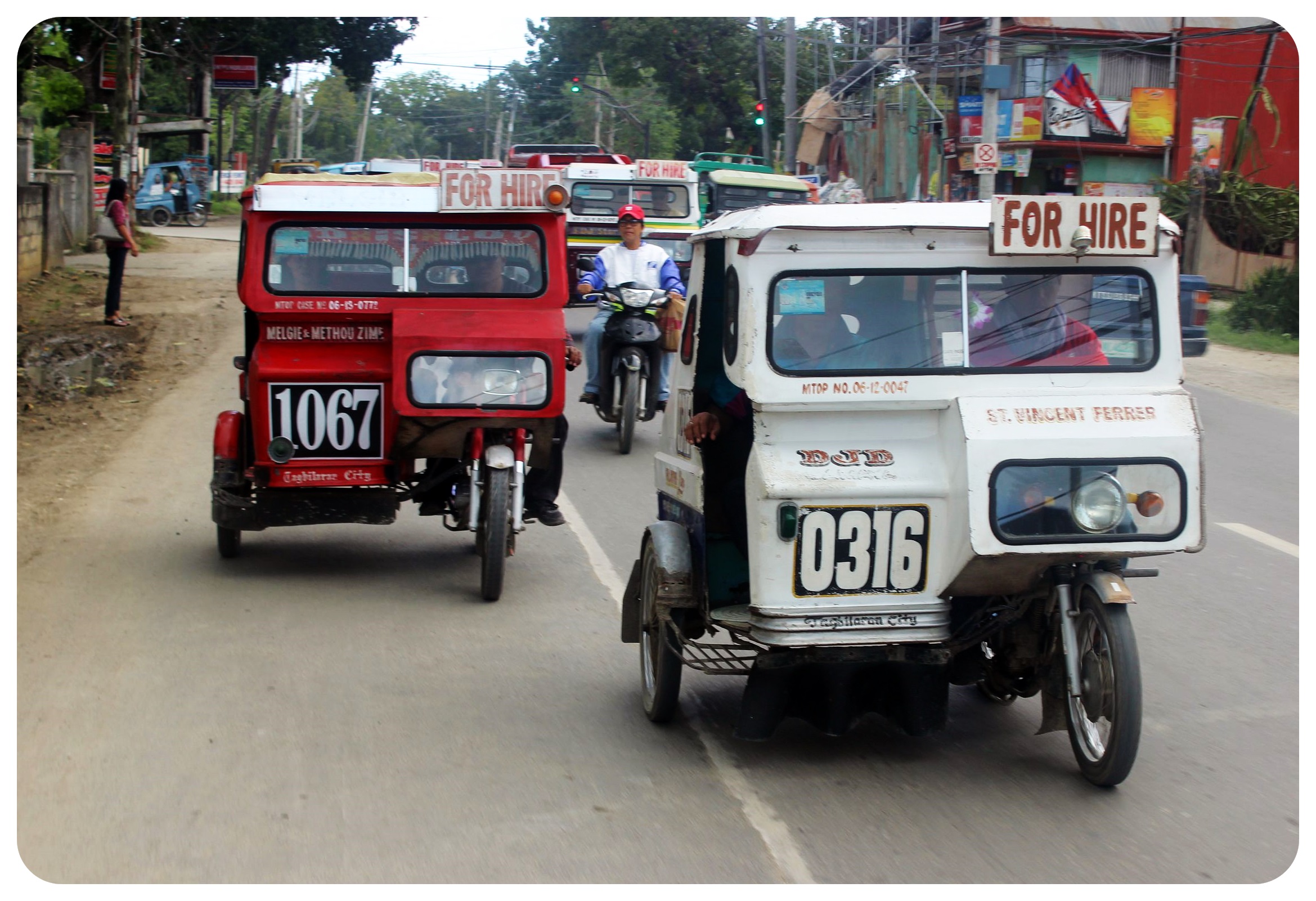 In addition to the tarsiers, I wanted to see the Chocolate Hills in Bohol, a bizarre and equally beautiful creation of nature. Ideally I wanted to join a tour to combine both, but the tours at the guesthouse I was staying at were 2,500 Pesos (US$56) and included a bunch of stops that I didn’t care about. And so I decided to visit both on my own, which didn’t seem too hard according to the Lonely Planet

: a jeepney to the tarsiers, and then a bus to the Chocolate Hills. 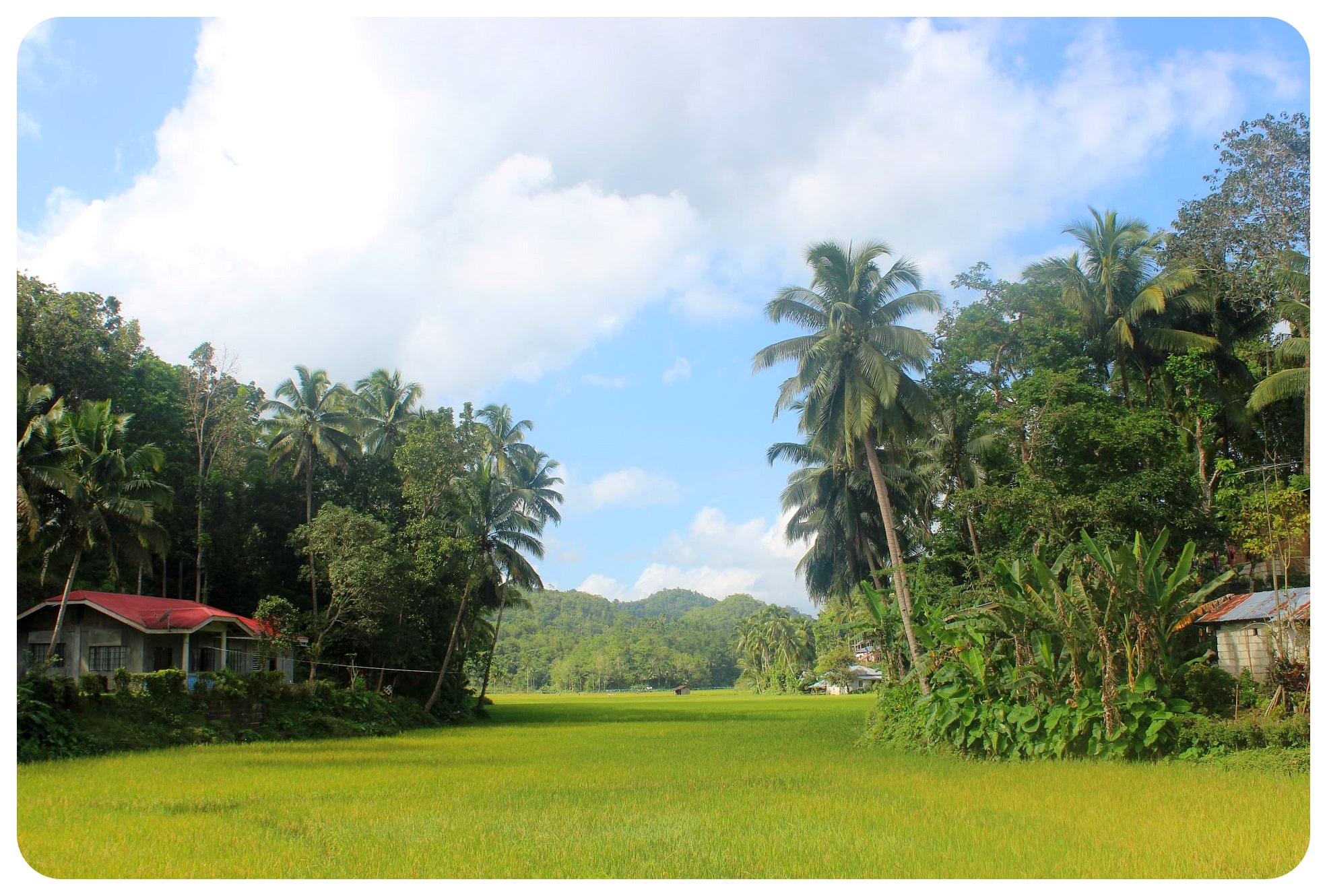 I had just sat down in the jeepney (the most common type of public transportation in the Philippines, basically a jeep with a longer back part in which two each other facing benches are placed, with room for 20 to 30 people) when a guy walked up to me and asked ‘You want to go to the tarsier sanctuary? I’ll take you with my motorbike. 100 Pesos’. It was one of those moments where I just wished I was a guy, because I am pretty sure none of my male traveler friends would have thought about that offer twice. For me as a solo female traveler, I was too fearful to accept his offer and waited for the Jeepney to fill up instead (they leave when they are full). Little did I know then that I’d end up on the back of some guy’s motorcycle later that day anyway. 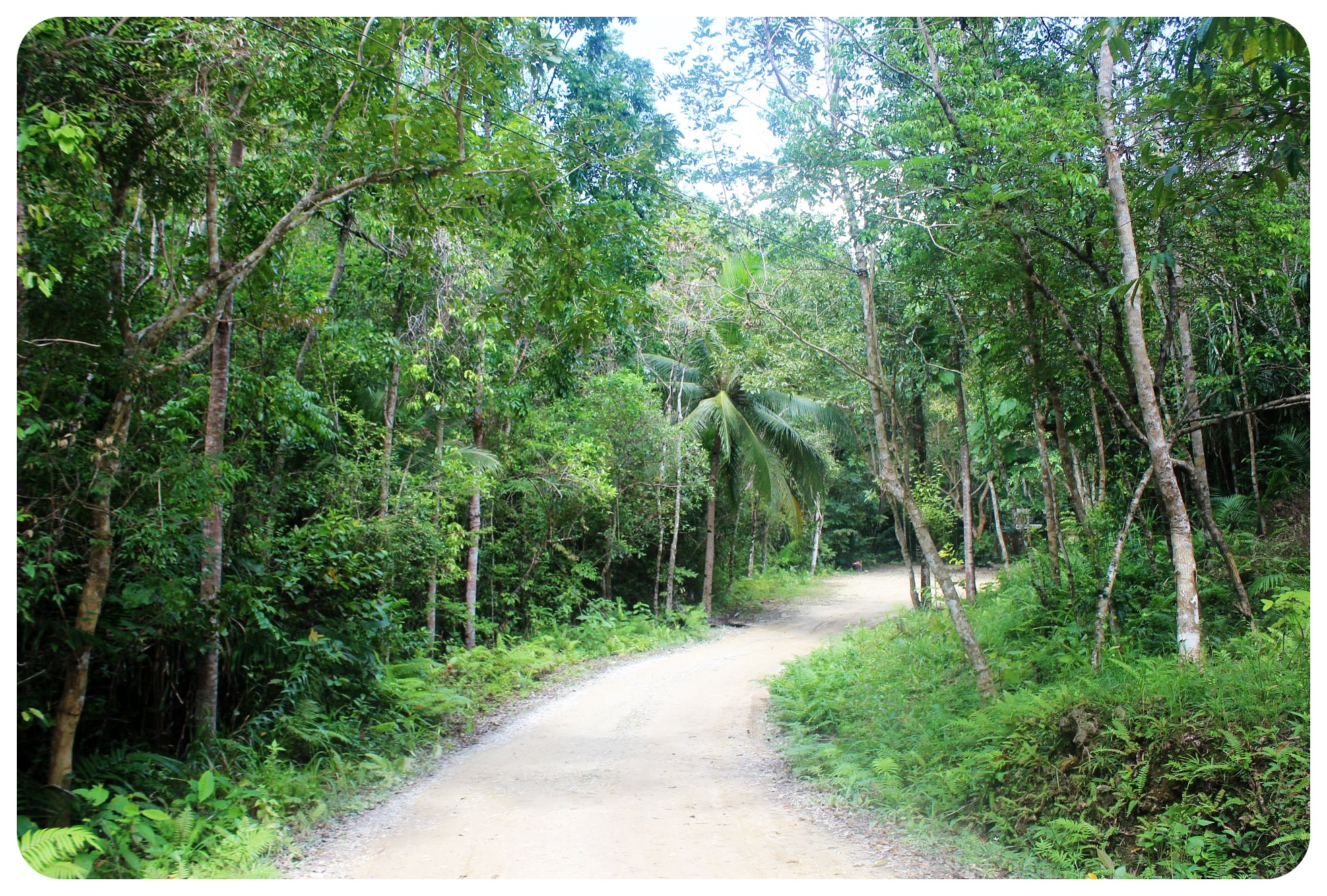 The jeepney made the journey longer as people were hopping on and off the vehicle every few minutes, but 45 minutes later I finally walked through the gates of the Philippine tarsier sanctuary, located in a jungle near the town of Corella. Tarsiers are some of the world’s smallest primates and can only be found in four island states: Sumatra, Sulawesi, Borneo and the Philippines, Bohol in particular.

While there used to be hundreds of them fifty years ago and before that, there are only very few left these days, because of deforestation and the resulting loss of their habitat. In Bohol, there are two tarsier sanctuaries were visitors can still see some of these incredibly cute animals. 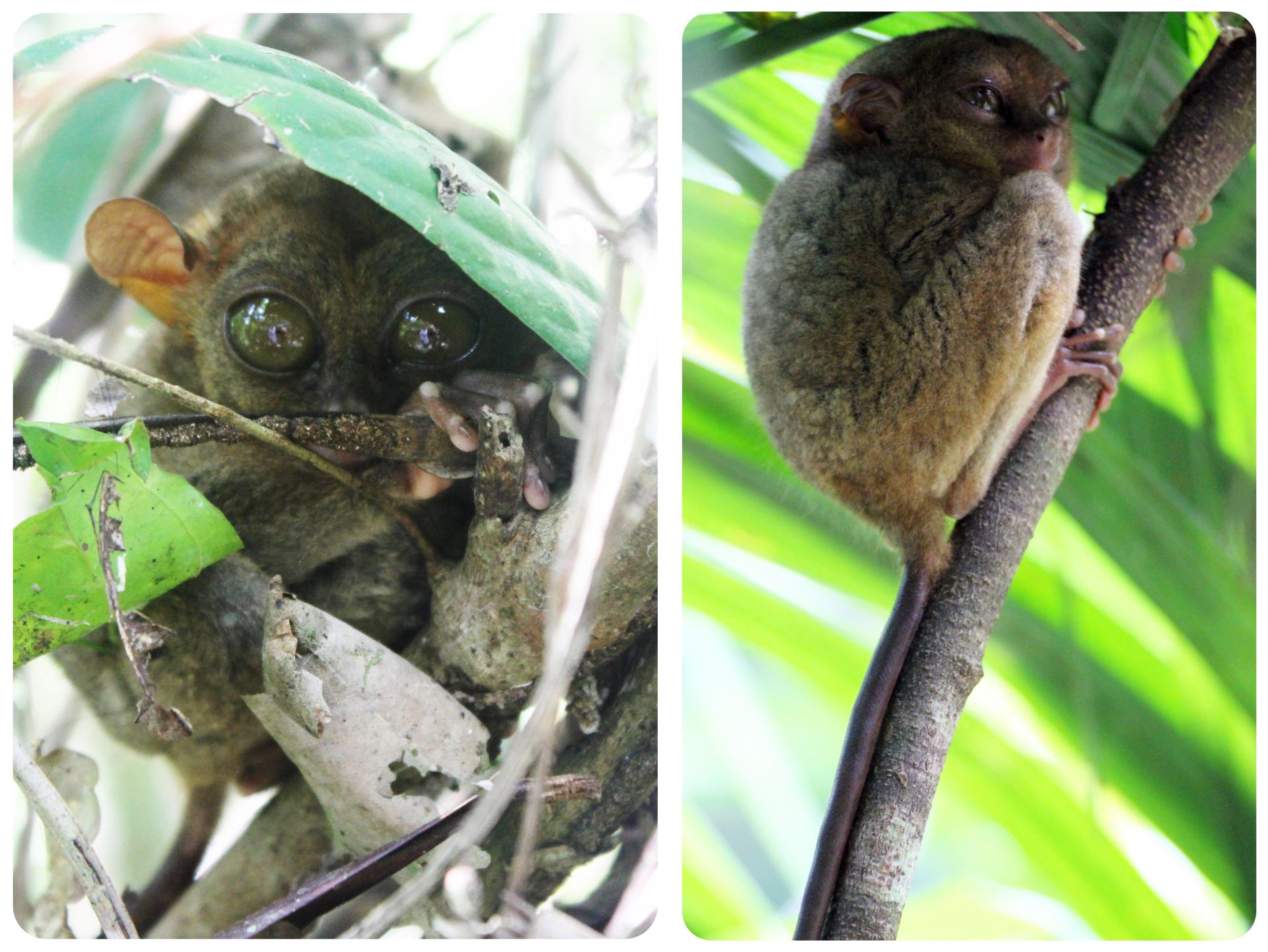 I learned that they are nocturnal animals, so they’re not really waiting for visitors to come by, instead you’ll see them snooze high above you in the trees. Well, you wouldn’t even see them, that’s how tiny they are, but there is a guide who takes you on a short walk through the forest and shows you where they hang out. Two little guys were sitting on branches low enough for me to have a close-up encounter, and when he looked at me with these big round eyes I had a hard time not to squeal with joy and excitement. All I could think was: how do I get him out of here without anyone noticing?! Sadly the guide who had showed me some of the resident tarsiers in the forest made sure that only what entered the forest got out of there. But jokes aside, as much as I’d like to cuddle a tarsier and have one as a mascot, tarsiers don’t do well in captivity and commit suicide when they are kept in cages (usually by banging their head against the cage).

I also learned that their eyes are the largest in relation to their body of any mammal, and their eyes are even heavier than their brains. Another fun fact: tarsiers can climb a tree within only one day of being born! 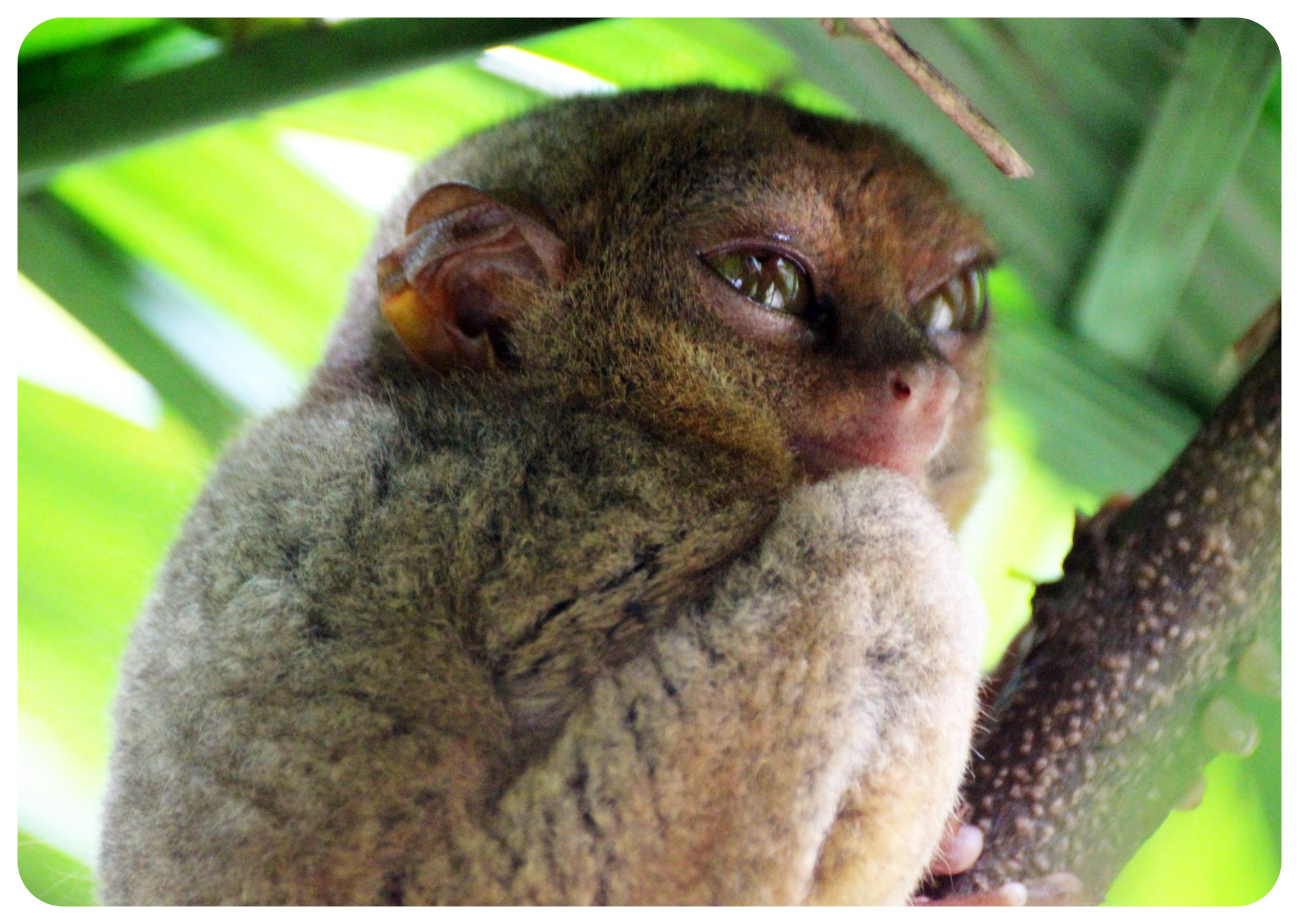 Overall, the experience was pretty rushed, my visit lasted maybe 15 minutes. I was the only one, and I felt like the guide wanted to rush me out so that he could go for lunch, or maybe he just didn’t think someone could want to stare at the tarsier for an hour or longer. Don’t get me wrong – I still think it was worth making the trip out there, it just felt a bit anticlimactic after building up so much excitement about finally ‘meeting’ a tarsier beforehand.

So I hopped on a jeepney back to Tagbilaran and took a bus to Carmen from the terminal to see the Chocolate Hills. It would be a long drive – 2.5 hours according to my guidebook, and so I settled in with a podcast. The ride turned out to be more enjoyable than expected – I loved the lush green scenery we passed through, the rain forests, rice fields and the little villages where people were going about their day (which means wandering around with their cows or goats). 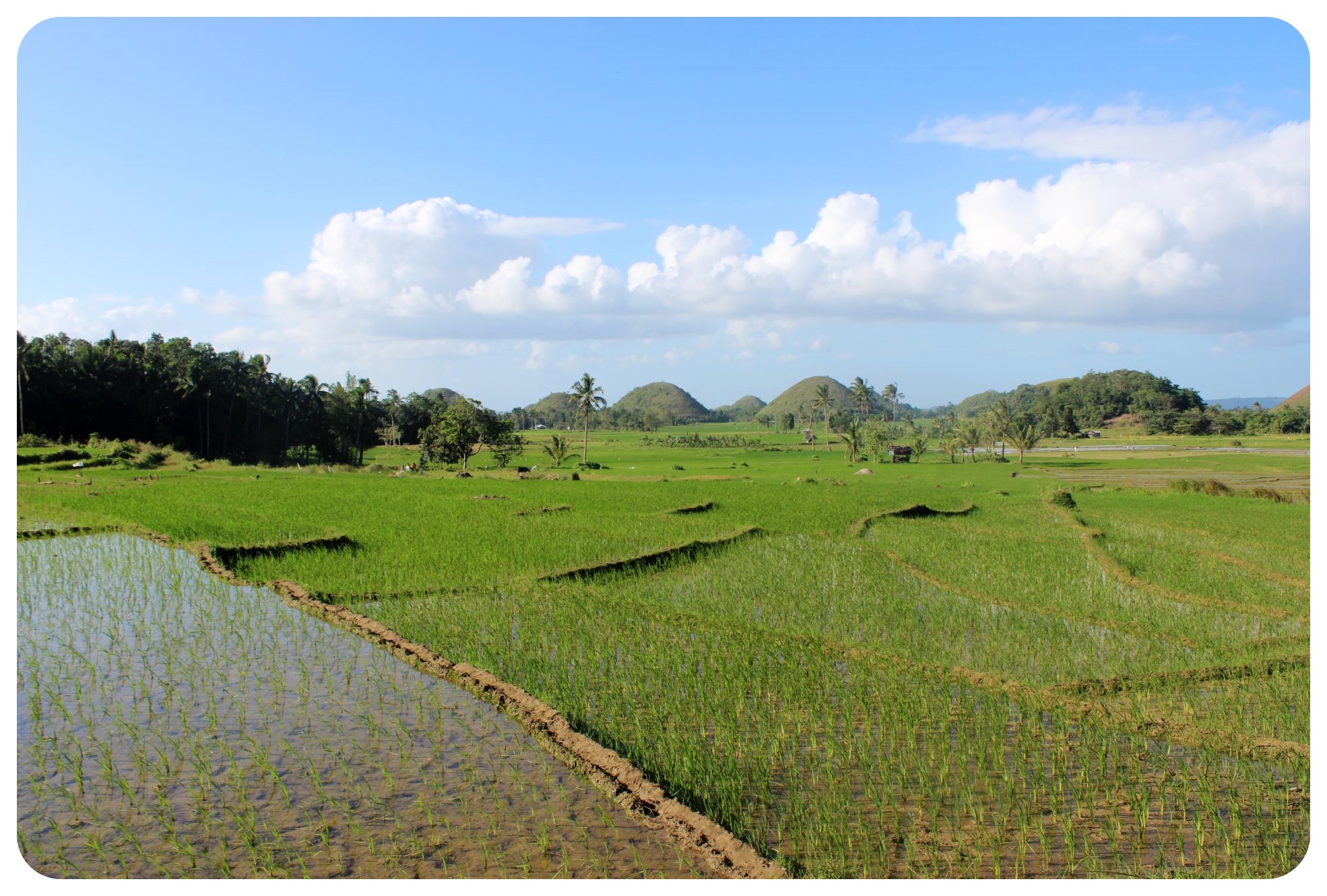 The ride was also shorter than expected: 90 minutes after boarding the bus I was told to get off by the conductor. I had already seen the first hills from the bus and couldn’t help but giggle about their shape. All my lesbian mind could see was a sea of boobs (apologies for my adolescent behavior ;-)). 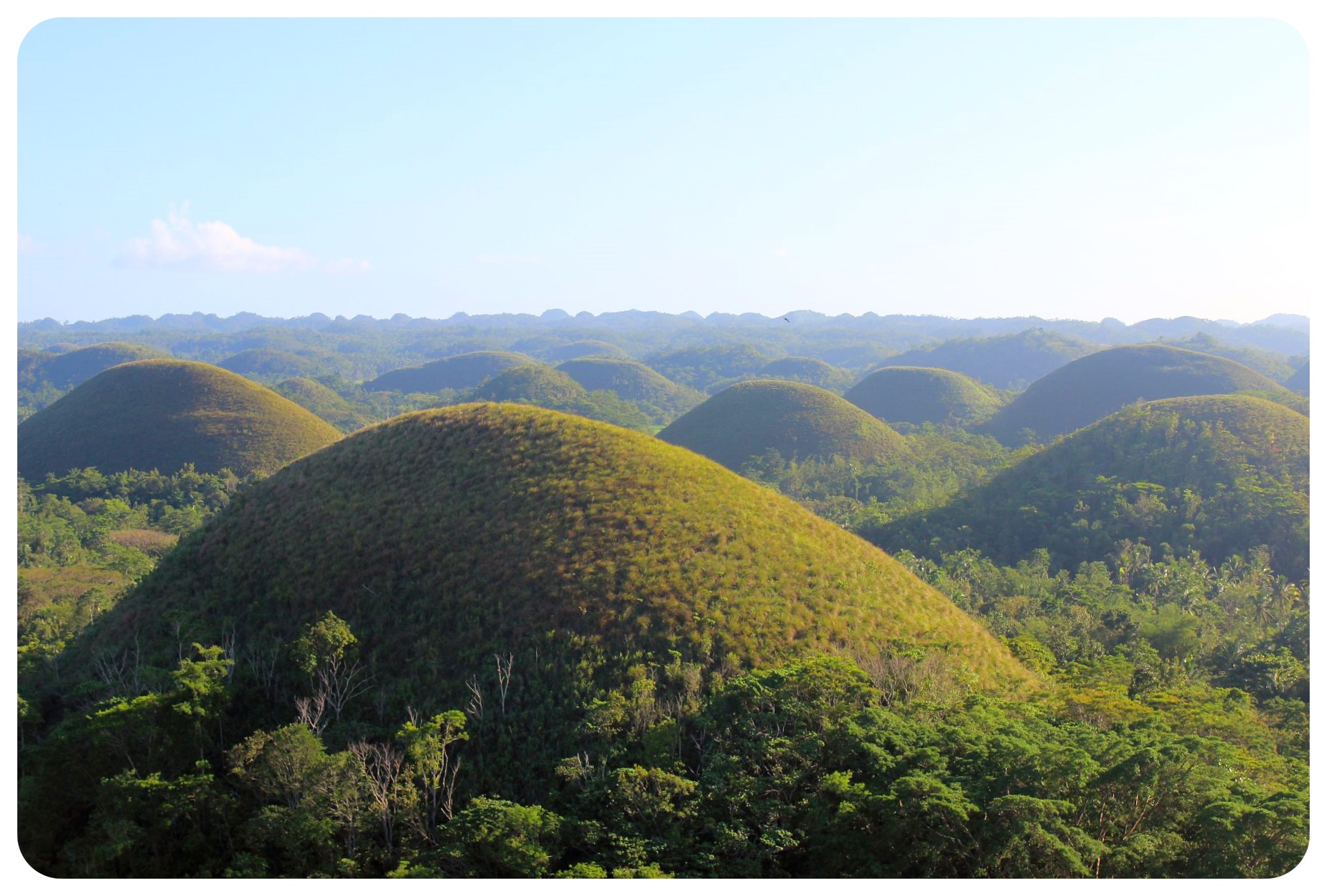 As soon as I got off the bus I was approached by a guy who offered ATV and motorbike tours through the hills. It wasn’t like I had much of a choice: the hills are spread out over a large terrain and unless I wanted to set off on a random hike across the fields, I would have to choose either one. The only other option I had was to walk up to the nearby viewpoint on top of a hill to enjoy the views over the hills, but I hadn’t just spent 90 minutes on a bus to only get some views. I wanted to get right inside chocolate hill country, and the guy had mentioned a climb up one of the hills.

Not even three minutes after getting off the bus I was on the back of some random guy’s motorcycle and off we went. The thought that nobody even knew where I was that day crossed my mind briefly when we sped down the dirt road towards the hills, but no risk, no fun, right? 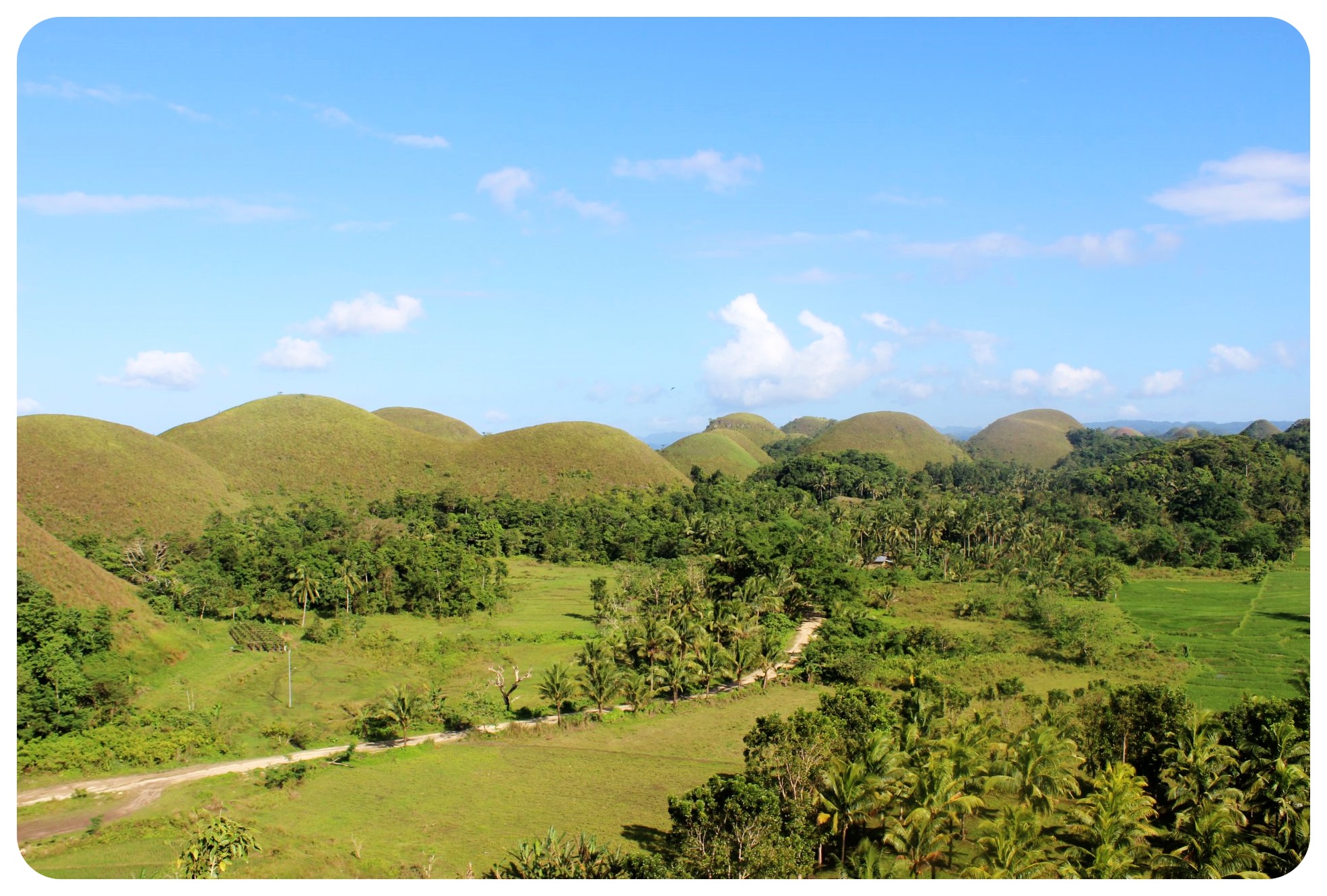 I relaxed a little more when we passed two other motorcycles, each with a young blonde in the back, and when I climbed up the steep slopes of a chocolate hill I was glad I had decided to pay for the guide (300 Pesos / US$6.75) – these views alone were totally worth it, and it was just the beginning of the private tour. After my short hike, he stopped at several scenic spots and eventually we went to the main Chocolate Hills viewpoint, which was packed with tour groups – apparently late afternoon was a good time to visit because of the good light conditions at that time of day. 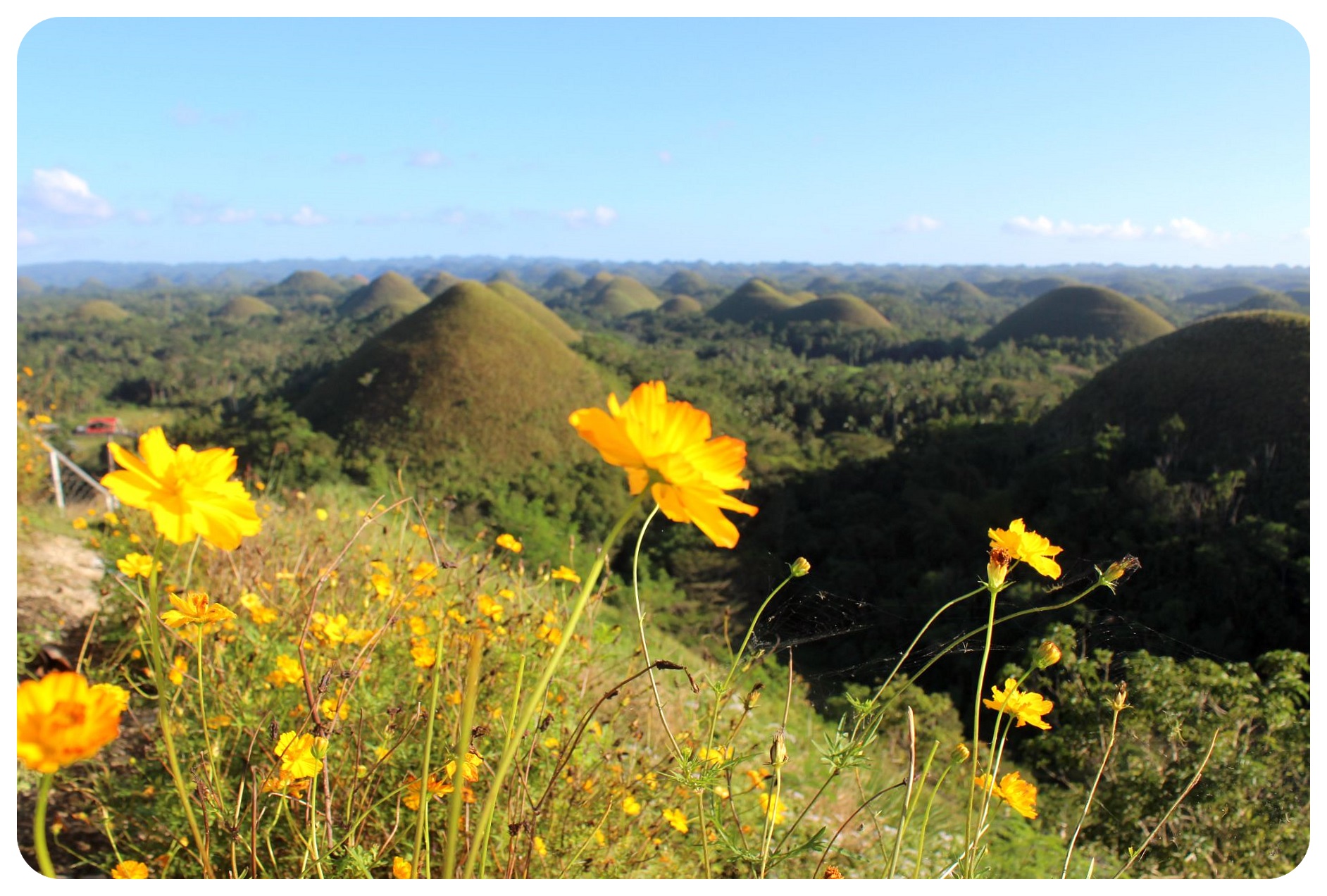 In total, there are over 1,300 of these hills spread out over 50sq km (20 sq miles), making the landscape look as if a giant mole has wreaked havoc here. While the 100 to 165 feet (30 and 50 meters) high hills were bright green during my visit in February, they look brown when the grass dries up during dry season, hence the name. 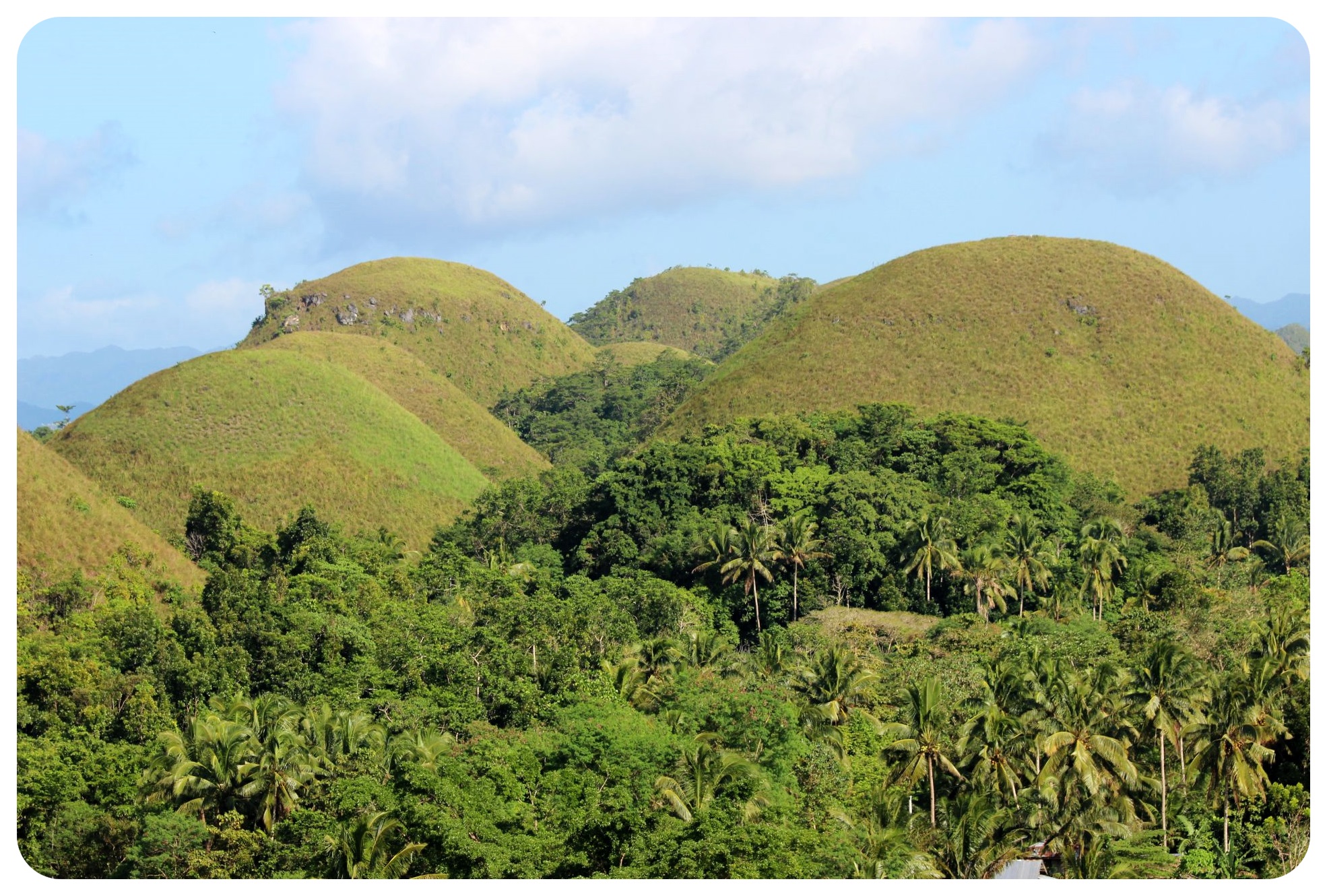 There is no clear scientific explanation on how these hills were created which is why there are a number of folk tales explaining how these oddly shaped cones came about: The first one says that two giants who didn’t like each other threw stone and rocks at each other until they made up after a few days, leaving behind a big mess. The second story says that a giant was desperately in love with a mortal girl, crying bitterly after she died, and turning his tears into hills to show his eternal love. The third story is about a giant buffalo who ate all the crops in the area, and the farmers decided to leave out spoiled food for him to eat and get sick. And sick he got – leaving behind a trail of feces which turned into the Chocolate Hills when they dried. 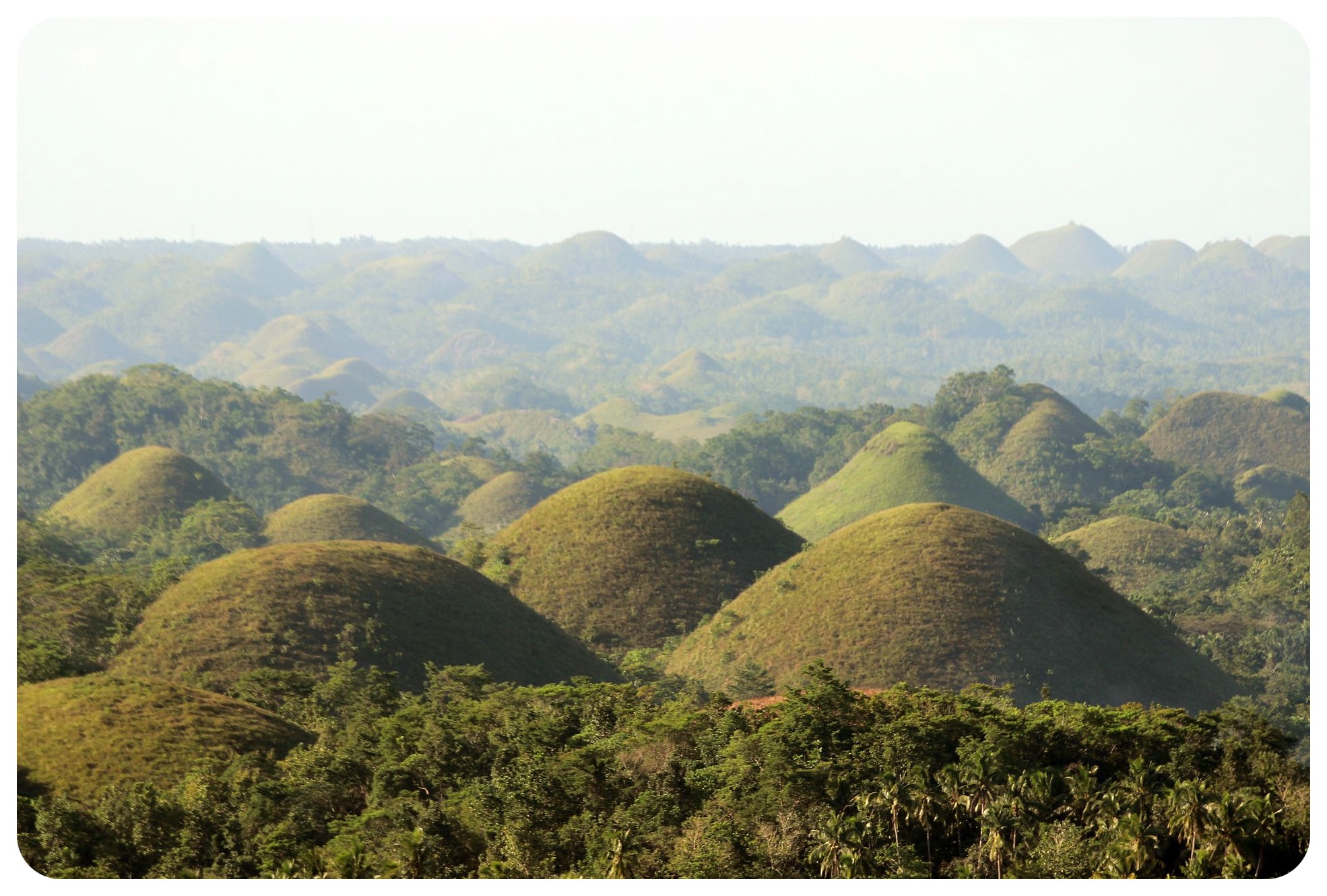 No matter which story is true, I loved what Mother Nature did there, and the hundreds of hills scattered across the otherwise flat landscape were a spectacular sight.

On my way back to Tigbalaran I did the math and calculated how much I spent on my day instead of the 2,500PHP tour: 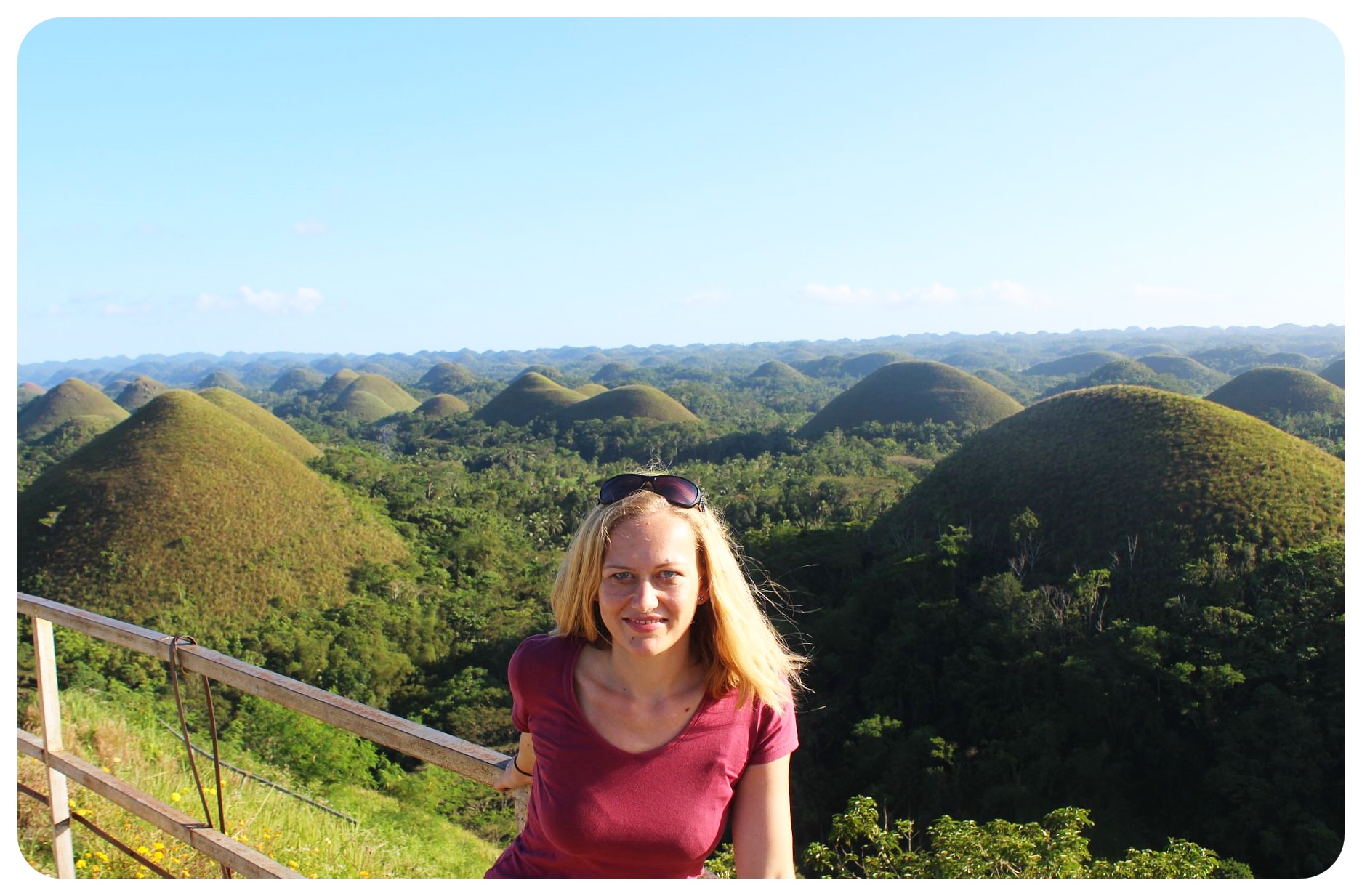 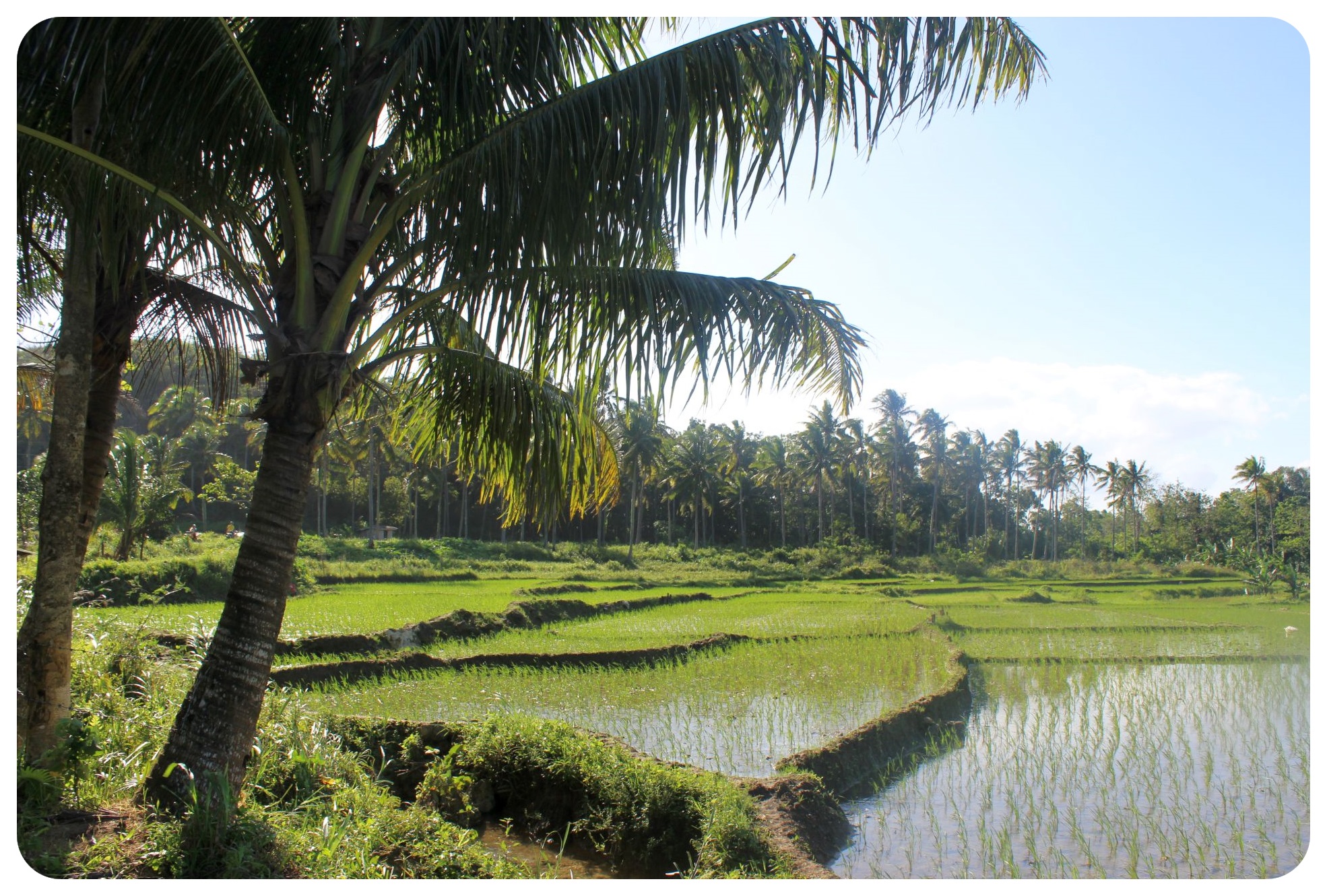 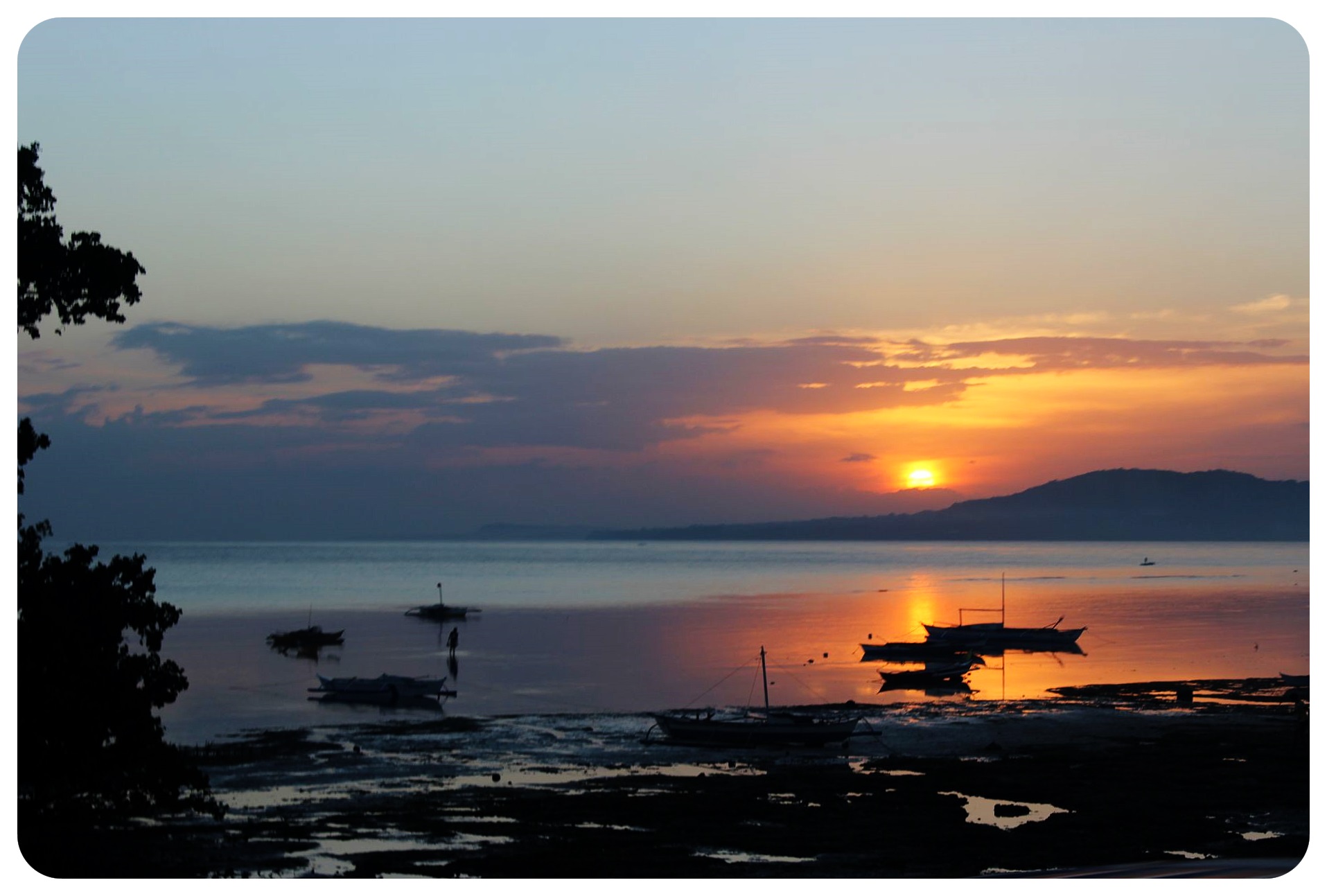 Which one do you like better, the tarsiers or the Chocolate Hills? 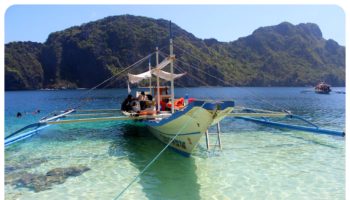