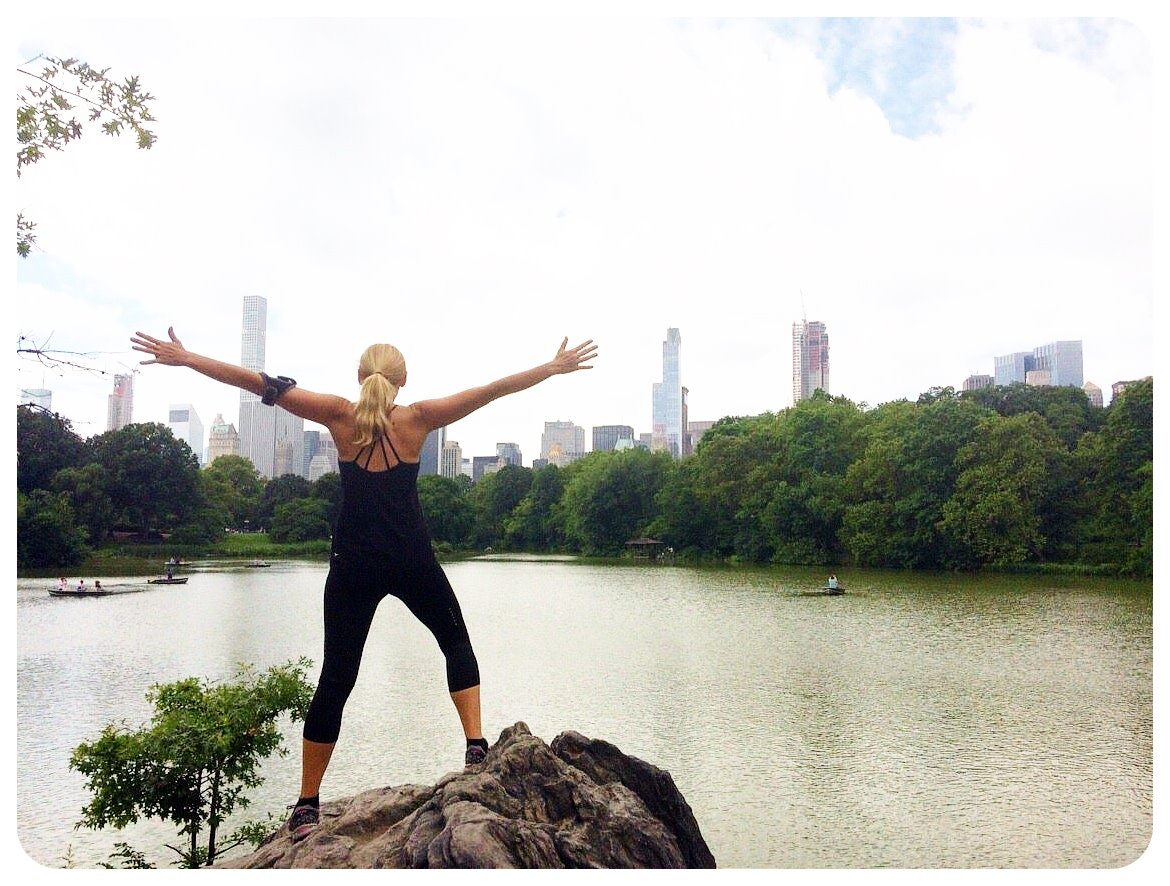 I rediscovered my love for running in 2013 when I spent the summer in New York City. In 2014, I decided it was time to run my first race and signed up for a 10k in Central Park. New York City is one of the few places in the world where I can’t get enough of running and already look forward to a sunset run, or I go to bed wearing my running clothes because I am eagerly awaiting my morning run through Central Park. Eventually, I decided to make NYC my home base, and when I first moved to the Big Apple, I moved around a lot and got to discover a number of different neighborhoods – which also meant I got to try a bunch of different running routes. Since the New York Marathon is only a couple of weeks away, I thought I’d share my favorite running routes in New York City. 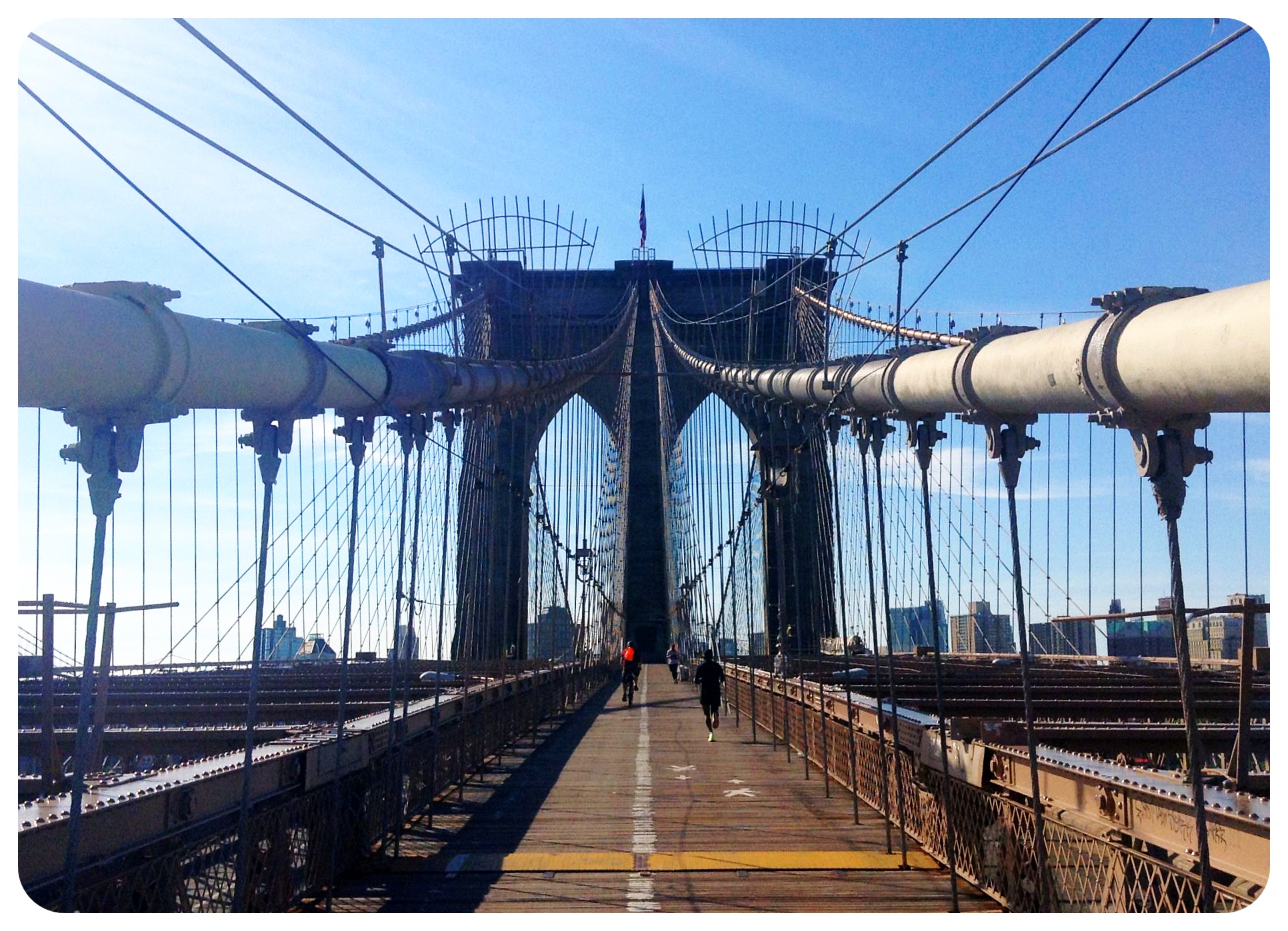 1 Riverside Park | Along the Hudson River

You can basically run along the Hudson River all the way from Battery Park on the far southern end of Manhattan to Harlem in the north, or just any part of the biking & walking path. The path runs right along the water most of the time, and not only can you enjoy the views of Jersey, but you also pass the Intrepid on this path, cruise ship piers, riverside lawns and marinas, and further north (around 59th Street) a little sculpture garden. Riverside Park is part of the path and officially runs between 155th and 59th Street. In the spring time, make sure to head up to Cherry Tree Walk (between 100 and 125th Street), a beautiful sight when hundreds of cherry trees are in full bloom. In the south, my favorite part is Battery Park, where you can enjoy views of the skyscrapers in the Financial District and see as far as the Statue Of Liberty. My favorite time to run along the Hudson River is at sunset – they are always spectacular! 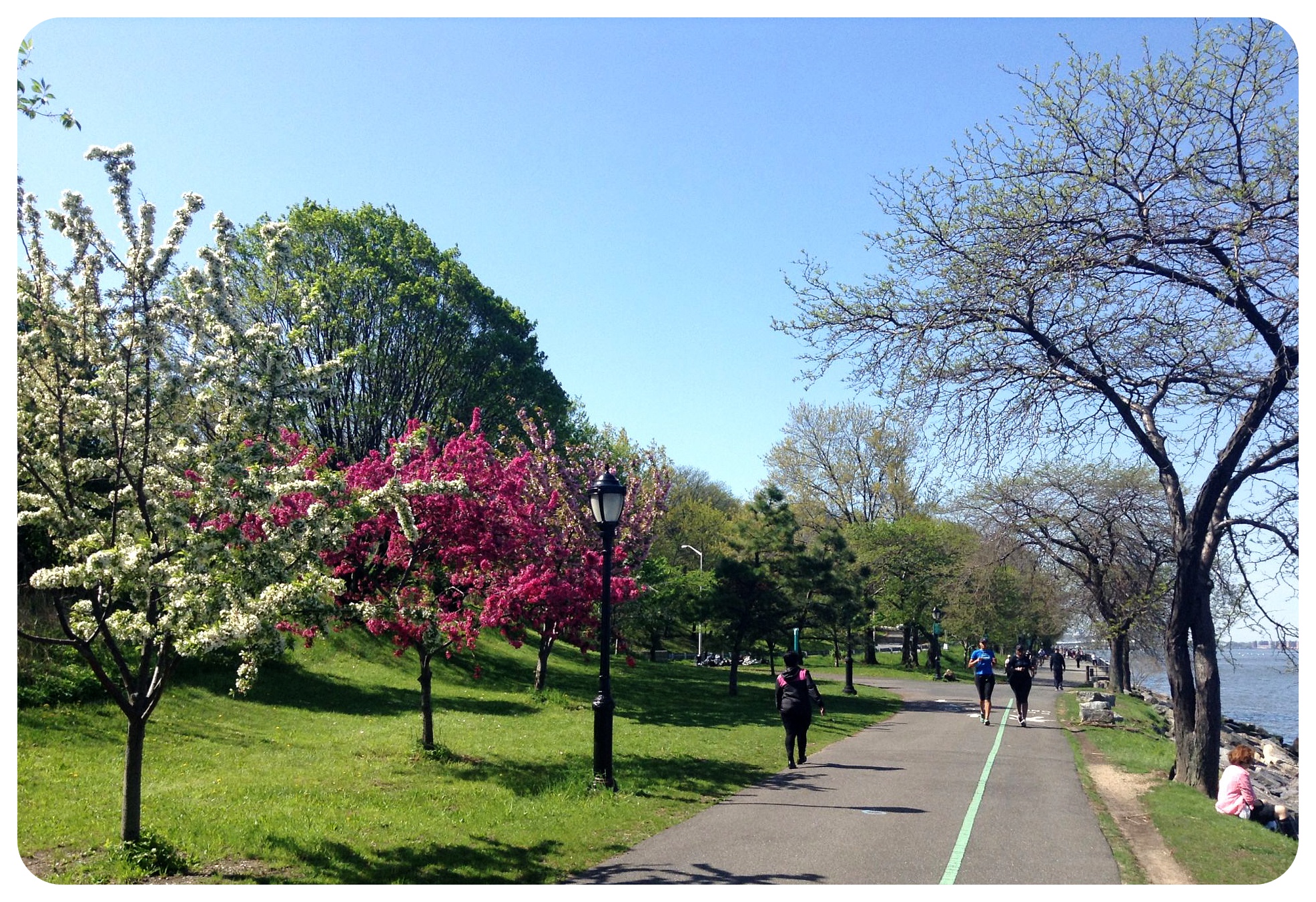 Length & Difficulty: As long as you want it to be. You can make it a short 5k or run all the way from 125th Street down to Battery Park (8.7 miles / 14km). You can find a map with all the access points to the river in Riverside Park here. The run is easy since the terrain is flat throughout.

If you find yourself in the southern part of Manhattan or in the Brooklyn Heights / DUMBO area, the bridges run is absolutely amazing. I usually started at the Brooklyn Heights Brooklyn Bridge access, crossed the Brooklyn Bridge, ran over into Chinatown where you can access the Manhattan Bridge and crossed back into Brooklyn, where the entrances to Brooklyn and Manhattan Bridge aren’t far from each other. The total run is about 6.3 miles (10 km), and for a shorter run you could just run across either bridge and back (but come early if you want to run the Brooklyn Bridge – it gets pretty crowded in the late mornings, until the sun sets). The views from both bridges are spectacular, and this is by far my favorite running route in New York City. 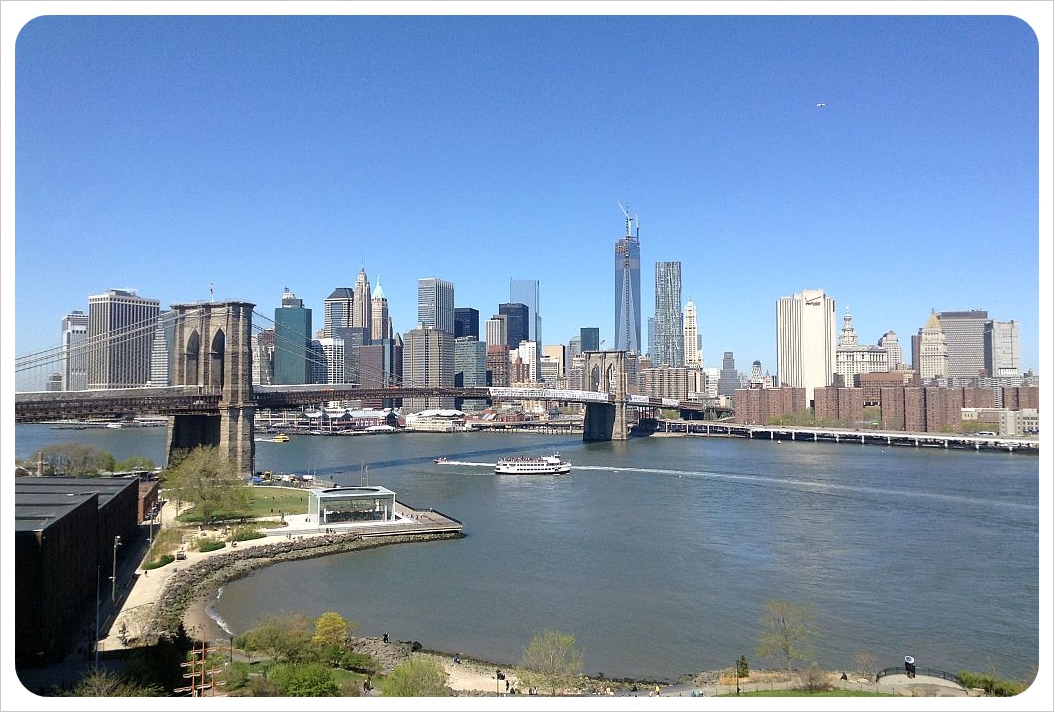 Length & Difficulty: If you start at City Hall in Manhattan and run across the Brooklyn Bridge, over to the Manhattan Bridge from there and back to City Hall via St James Place, the total distance is 10k. The If you only run from City Hall across the Brooklyn Bridge (to the High Street Subway Station), the distance is 1.3 miles (2.1km) – running there and back would be 2.6 miles (4.2km). The access to the bridges is not extremely steep, but definitely a little challenging, since the way up is steady and long. 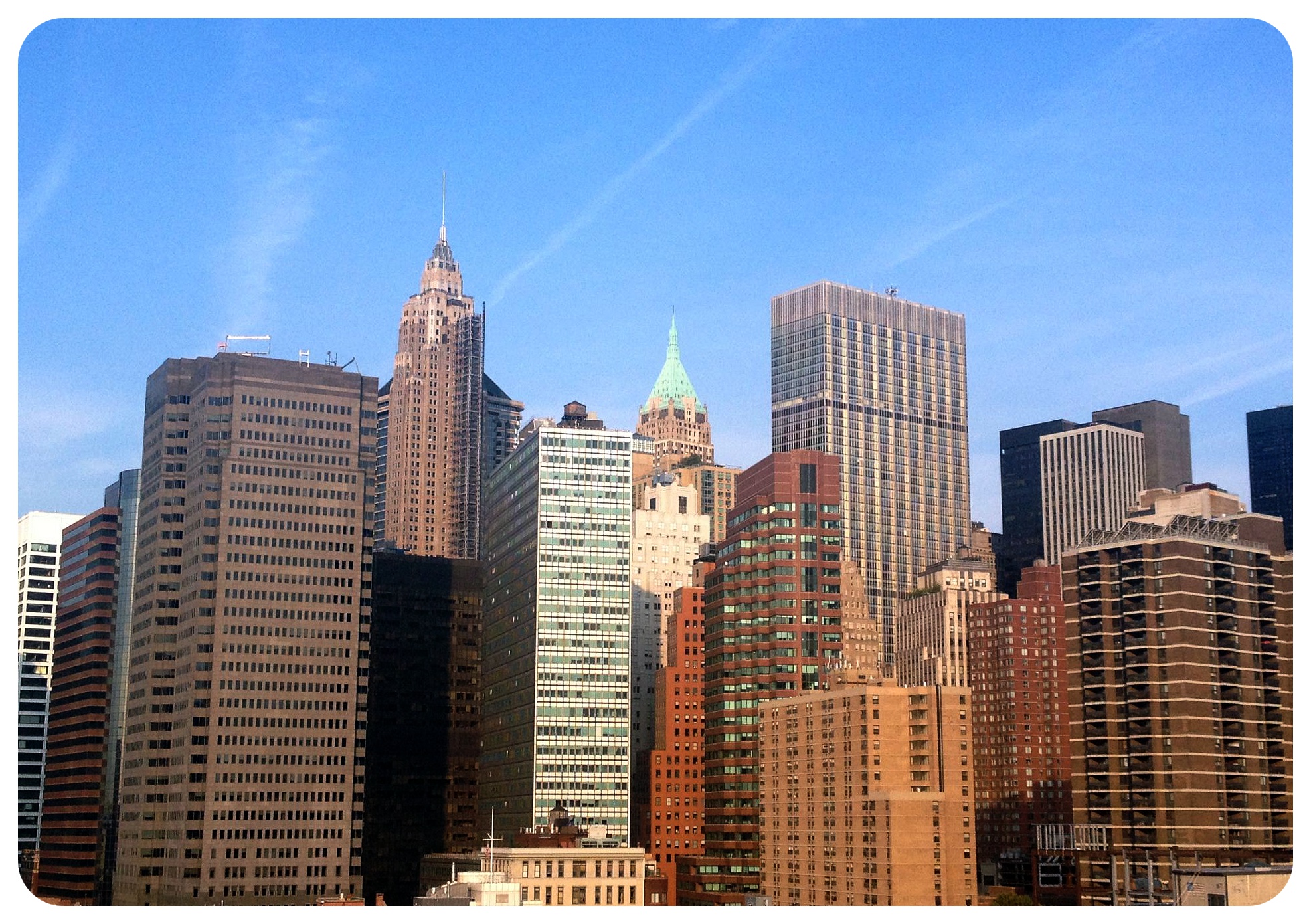 While the Riverside Park running path on Manhattan’s west side allows you to run almost the entire length of Manhattan, you can only run up to Midtown on the east side, but the views you get make this worthwhile run. You can also run the northern part of the promenade from 59th Street to around 101 St. You could start in the East Village (around 14th Street) and run all the way down to the Brooklyn Bridge and back, or only run to the Williamsburg Bridge and across. I also ran this path from the Williamsburg side – starting with a bridge crossing and then heading north on the East River running path. Remember though that you need to get back somehow. I usually bring my MTA card with me, just in case I run too far and don’t have the energy to run all the way back (trust me, it happens when you get lost in the literally breathtaking sightsee-runs). 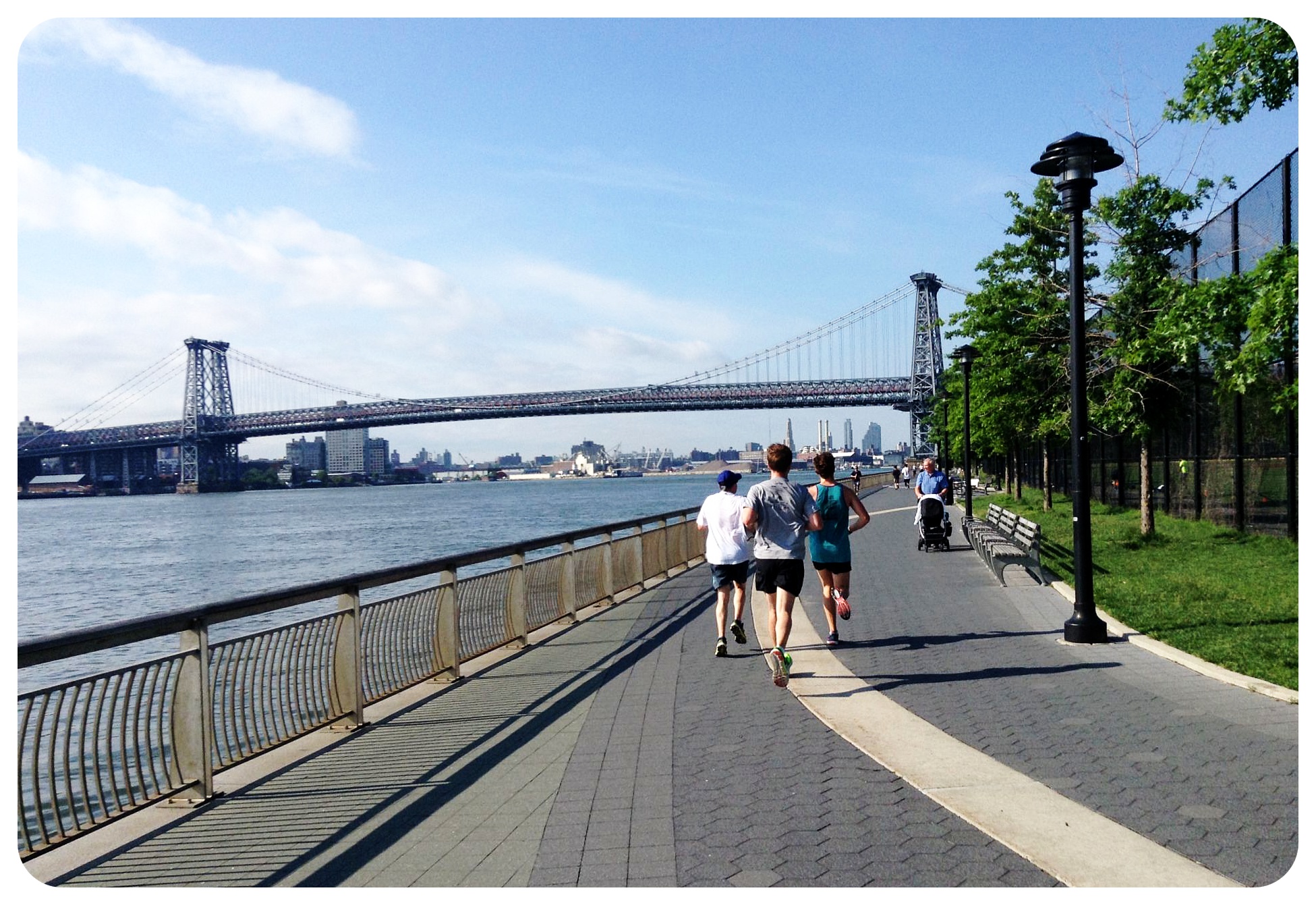 Length & Difficulty: From Stuyvesant Town to Brooklyn Bridge, it is about 2.8 miles (4.5km). 14th Street to Williamsburg Bridge is about 1 mile. Crossing the bridge is another 1.6 miles – if you start in Stuy Town and run over to Williamsburg (the end of the bridge) and back, it is a total of 2.6 miles (4.2km). If you only run along the promenade, it is an easy track; adding the Williamsburg Bridge crossing into the mix though makes it a tough run – the bridge ascend is pretty steep on both sides. 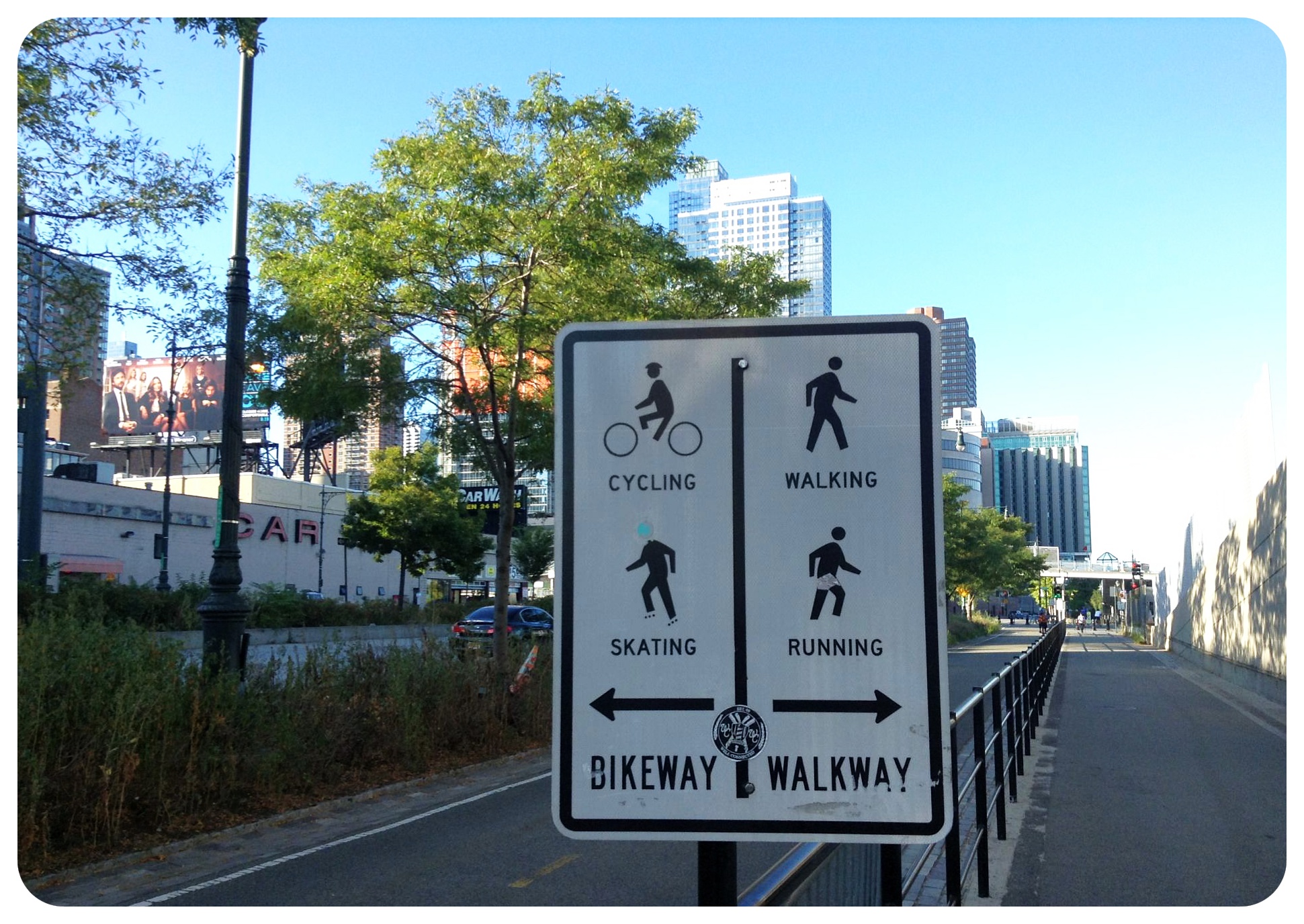 This one is a classic – the 10K (6.1 miles) Central Park loop. Definitely one of the running routes in New York City that every runner should conquer at least once! It’s a challenging run, especially once you reach the hilly part towards Harlem, aptly named the Harlem Hills. There’s nothing like running in Central Park though and I love venturing off the loop during my runs to include the lake, the Bethesda Fountain or the Turtle Pond with Belvedere Castle into my workout. My favorite time to run in Central Park are the early mornings before the park gets busy and the air is still fresh and crisp (especially on the hot summer days). If 10k are too long for you, just run any part of the loop and back, measuring your distance with an app or just by using your watch. This map has a good overview of the park’s trails. 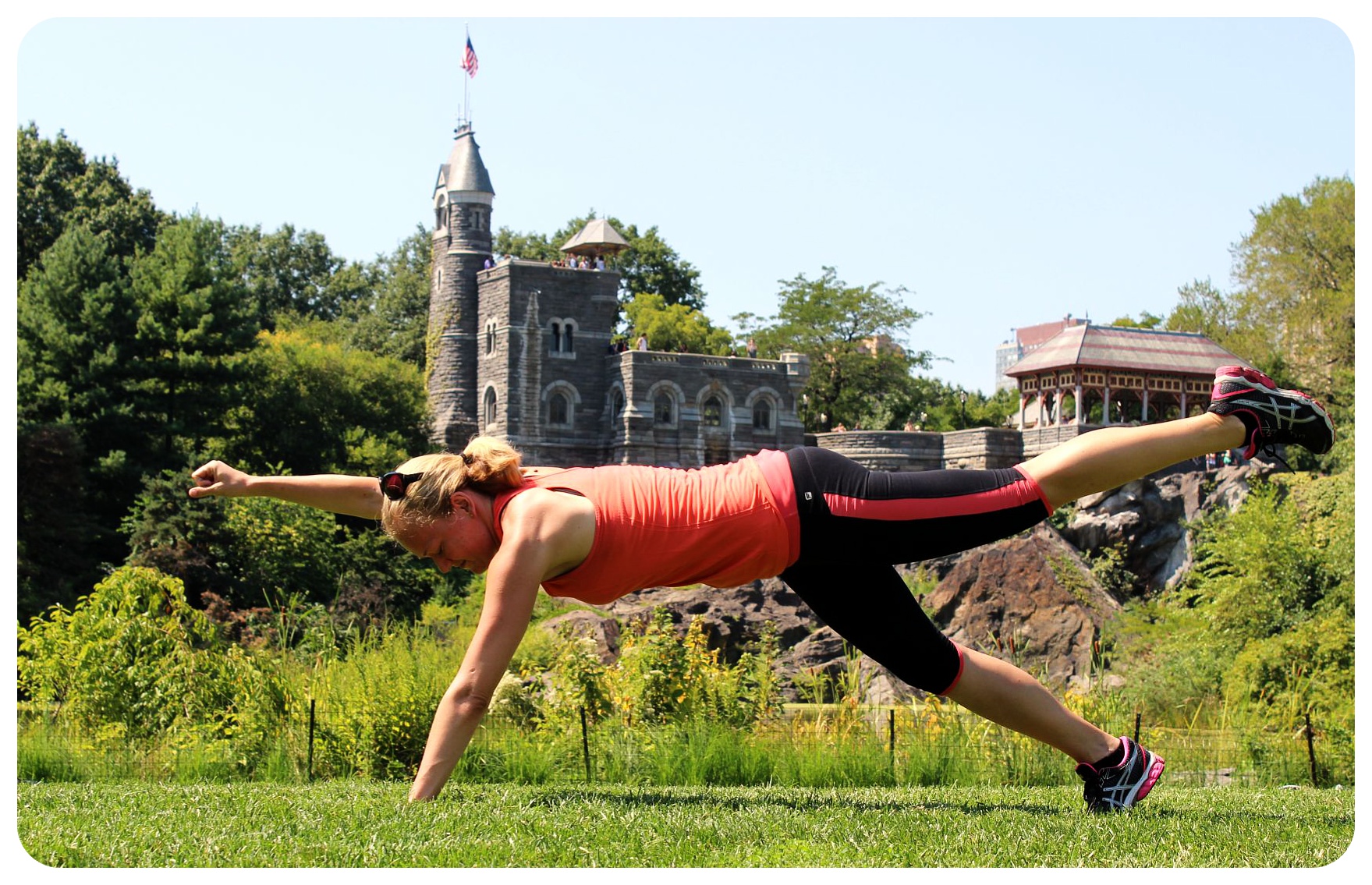 Length & Difficulty: 6.1 miles (10k) if you run the entire loop. The loop around the Jacqueline Kennedy Onassis Reservoir is 1.6 miles (2.6km). The loop is quite challenging due to the hilly terrain. When I ran my first 10k here, I wished I had practiced in the park more often instead of only running on flat terrain.

If you are staying in Brooklyn, there’s no need to be jealous of the Central Park runners, since you have your own version of a fantastic green space (Prospect Park was also designed by Olmsted, the designer of Central Park). While some parts of Prospect Park remind me of Central Park, others have a completely different feel to it. The loop is not quite as long as Central Park’s loop at 3.4 miles (5.4 km), but you can add some miles by venturing into the smaller trails in the park (be careful not to get lost though – it happened several times to me here). You can find a map with the big loop and some shorter runs, including their distances, here. 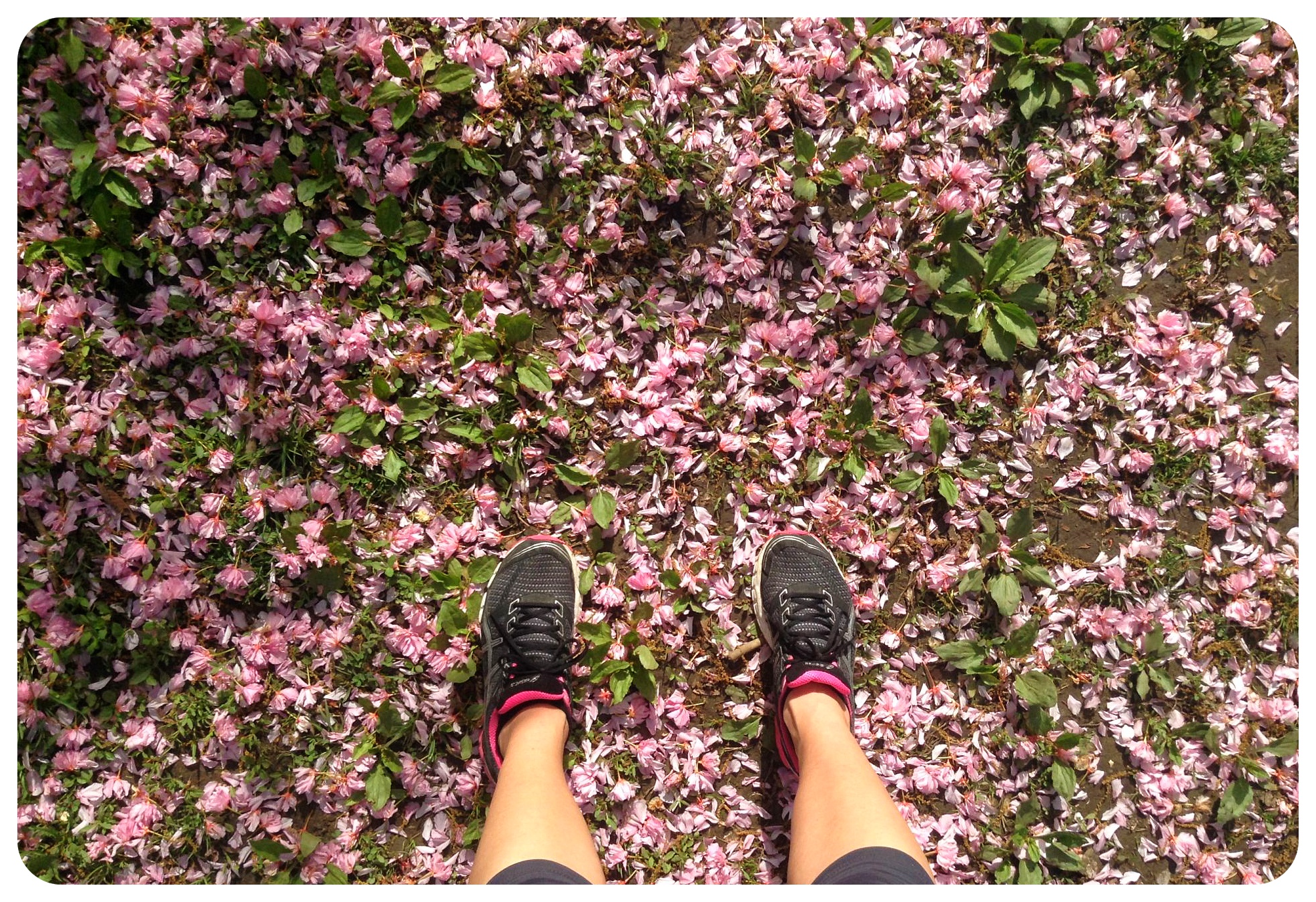 In addition to these routes that I’ve run frequently, I also just enjoy running the city streets, combining it with some sightseeing. I’ve run Broadway from 110th Street all the way down to SoHo, explored Upper Manhattan with runs through Harlem and Morningside Heights, discovered some of Brooklyn’s best street art with runs through Bushwick and enjoyed the views from the Brooklyn Heights Promenade and Brooklyn Bridge Park on long runs from Prospect Heights to the East River and back. There are literally a million and one running routes in New York City – just put your shoes on and run where your feet carry you! 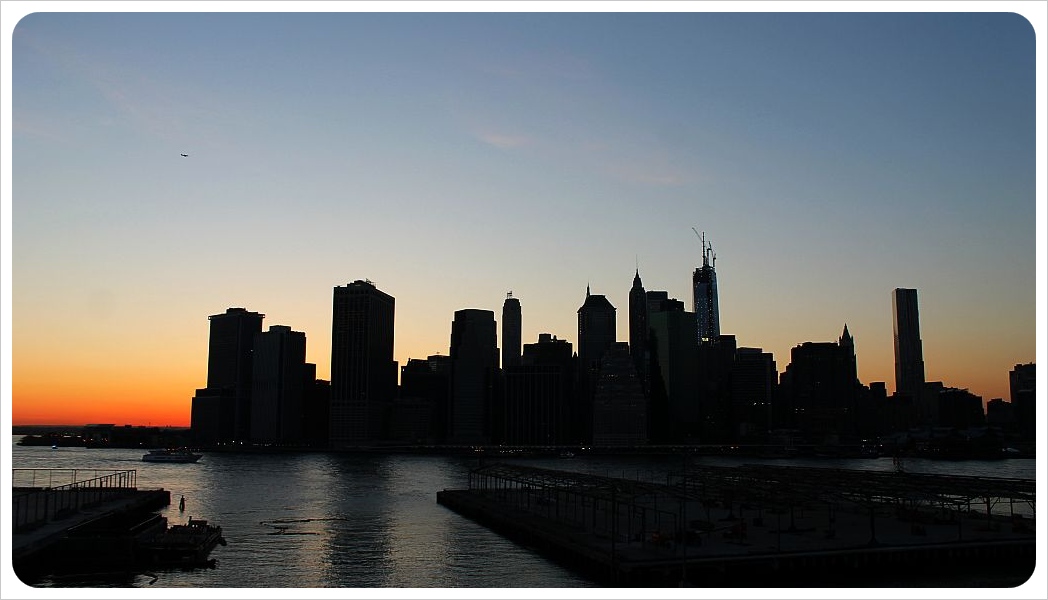 For a detailed listing of New York’s best running routes in all five boroughs, check out the Places To Run section on the official NYC Parks website.

As for clothes: I randomly discovered this new brand, which only launched in October 2013 and was co-founded by Kate Hudson, and am officially addicted to their workout clothes. I almost feel sexy on my runs whenever I wear my Fabletics outfit, despite being sweaty and sticky! Before I found Fabletics, I didn’t pay too much attention to my running clothes, but now I can spend hours browsing through the outfits on the Fabletics website, mixing and matching different colors and variations of a certain style. I find the clothes to be the most comfortable running gear I’ve ever owned, the tank top and leggings are so silky and smooth that it feels like they are hugging my body. The compression is great, and so is the quality of the garments. My running gear has gotten a lot of use over the summer months and the clothes still feel like they are brand new. I also love that most of the outfits come as a three-part set, allowing me to take the tank top off and still not looking like you are wearing underwear because the sports bras are designed to be shown off. The only thing I don’t like is the size of the little pocket in the back of the pants – my other workout pants comfortably fit my credit card, some cash and my keys, but I have to really squeeze to get a credit card into my Fabletics pants’ pocket. The 3-piece sets are usually under $49, and even $39 if you are a VIP subscriber, which is great value for money. Fabletics is adding new outfits all the time, which makes the website pretty addictive (I can’t wait to order my next set of running clothes) – don’t say that I didn’t warn you! 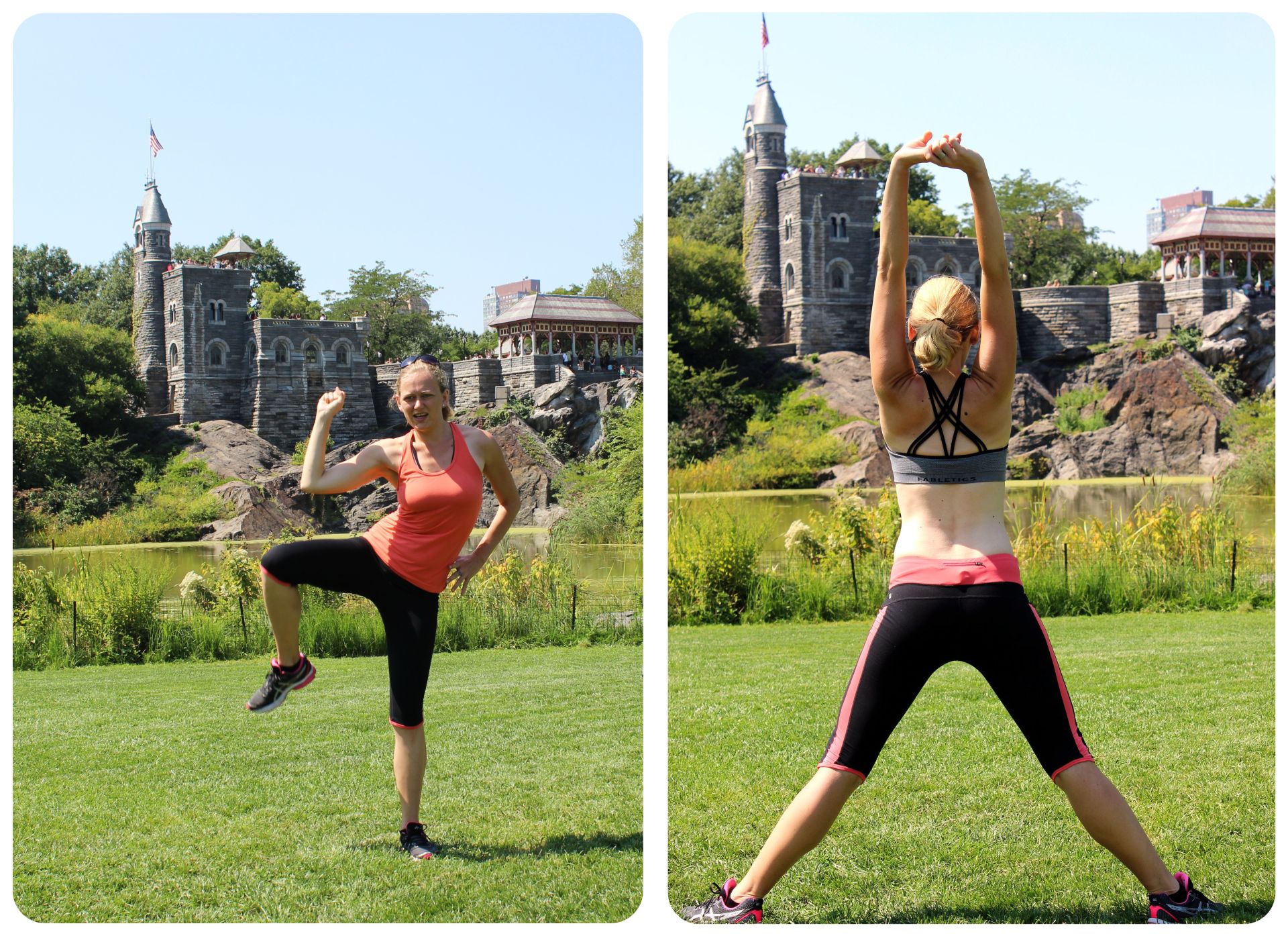 Are you a runner and know some good running routes in New York City? Feel free to share your favorite routes!

Who Are FIT Tourists and Are You One of Them?

What Does Travel Insurance Actually Cover?