I have always felt like a refugee or political exile forced to live abroad away from a country that does not accept me one hundred per cent and treats me like a second class citizen. DOMA and its discriminatory, homophobic effects were something Dani and I have chosen to block out because we have traditionally been based in Europe, where we are free to live the way we choose. It’s hard to verbalize the sting of these feelings, especially when we know so many heterosexual bi-national couples who are able to settle in the U.S. almost effortlessly. Luckily, Ligeia and her Canadian partner Mindy of BoundingOverOurSteps.com offered to write a guest post about how the fall of DOMA has affected their relationship and their future – and we ‘bounded’ at the chance to have them tell their story!

The fabric of the United States of America is stitched together with the notions of freedom for all and that all citizens have the right to life, liberty and the pursuit of happiness. Except for same-sex couples. Looking back over my life this past decade, I can personally testify that the federal government took away my freedom to pursue a life of happiness at home.

On September 16, 2006, I married Mindy, my soul mate. For the wedding we chose Niagara Falls, a natural wonder of the world as bi-national as we are. Mindy’s country, Canada, had already been issuing same-sex marriages for a few years, and I was ashamed and angry that my own country was so far behind the times. 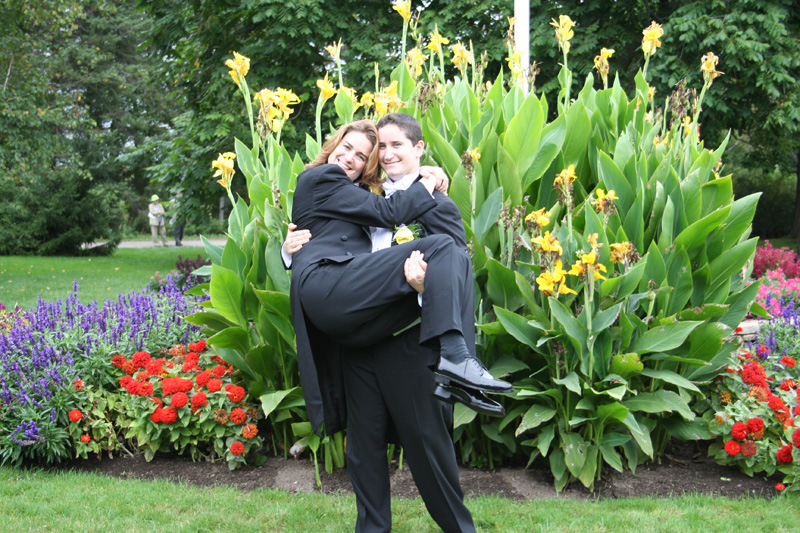 The U.S. government wasn’t simply lacking legislative progress in terms of marriage equality, it was actively and unconstitutionally discriminating against lesbian and gay couples. The Defense of Marriage Act (DOMA), signed into law by Bill Clinton in 1996, blanketed the entire country with a strict definition of marriage being between one man and one woman. In doing so, the United States downgraded my relationship with Mindy to “just friends”.

This meant I couldn’t sponsor her as my spouse for immigration. It meant being told blatantly to my face by a U.S. Border and Customs Agent in Miami that the federal government doesn’t recognize my marriage, in America Mindy and I are not family. Mindy would have to fill out her own customs form – as a tourist – despite the fact that Canada and the U.S. have a long-standing agreement to immediately recognize marriages performed across the border.

The rule applied only to heterosexual couples in the U.S. even though just steps across the border, we were recognized in Canada. 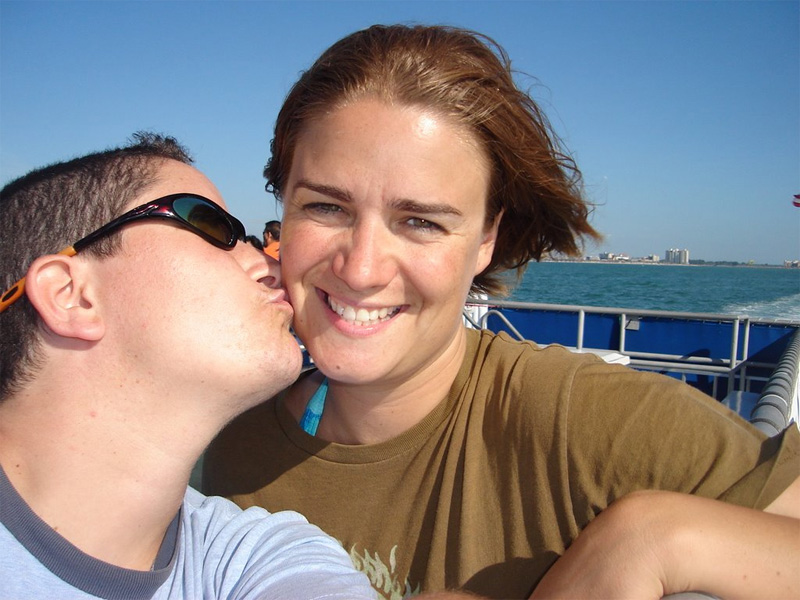 Each time we filled out those separate customs forms (which as avid travelers we did a lot!), anger, frustration and sadness started to seep in and I found myself, at times, losing the battle against the manifestation of bitterness.

Although we investigated immigration options for Mindy, she wasn’t able to live permanently in the United States. The ironically named Defense of Marriage Act forced me to choose between living without my wife in my home country, or taking my marriage and living in exile outside of it. Obviously, I chose Mindy and we made a home in Canada.

We lived in Toronto for five years. Even though I loved living in a city with a thriving lesbian community and in a country where I felt supported by the government, I often felt the sting of anti-Americanism. The generalized insults towards Americans constantly told me I was fatter, dumber and more obnoxious and arrogant than the average Canadian. It got to the point where I was hesitant to even leave the apartment, making it clear that Canada could not be our home.

With each day that passed, that anger, frustration and sadness within me grew stronger, as DOMA continued to prevent me from moving back home. I wish I could have simply moved to Massachusetts or one of the other of states that were then performing same-sex marriages. But, immigration is a federal right and the Defense of Marriage Act superseded individual state law, even if same-sex couples, both American, could get married there. 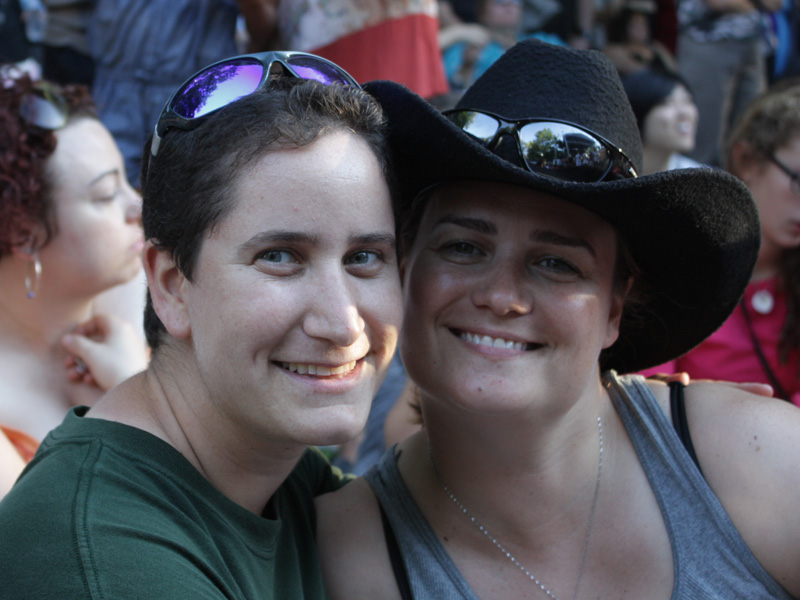 The fight for marriage equality for same-sex couples is often equated to the fight interracial couples had to fight half a century ago, so let’s put our struggle into context. Interracial couples who were both American had the right to marry in certain states (until 1967 when Mississippi became the last and final state to allow interracial marriage), but would a white American man who married a black Canadian woman be unable to bring his new bride to the United States to live? Immigration was not the hot-button issue it is today, but this exact issue is what thousands of bi-national same-sex couples, like us and Dani and Jess, too – have experienced – until the U.S. Supreme Court rules that DOMA was unconstitutional this past month and repealed it.

Today, with tears in my eyes, I can finally say that my country recognizes my marriage. Over a thousand federal rights and responsibilities are now available to me, including sponsoring Mindy for immigration, filing joint income tax returns with her and making her my beneficiary for Social Security benefits, to name a few.

So, the question we’re asking ourselves now is “Where do we go from here?” Of course, as soon as we heard the news of the Supreme Court decision, we questioned whether to start Mindy’s green card application. Do we uproot our entire lives, ones that we were forced to create, just because DOMA has been repealed?

Just over a year ago, we moved to Chiang Mai, Thailand and made it home for the foreseeable (short-term) future. I love my job teaching English to university students, and Mindy is certainly making a difference working to improve the lives of Asian elephants. 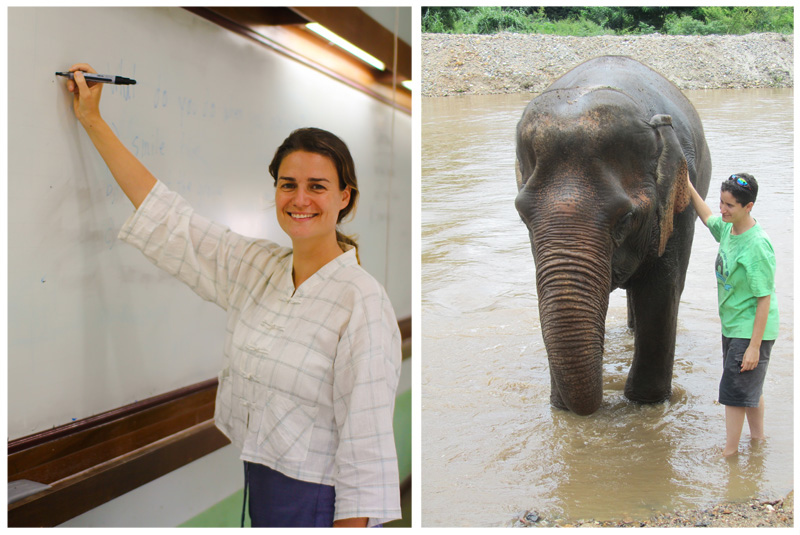 We also absolutely love to travel, and having a base in Thailand is allowing us to visit amazing countries in the region. Our goal is to visit every country in the world, immersing ourselves in the different languages and cultures, and investigating the tasty, vegan options each cuisine offers.

I don’t know where we’ll live next. But with the repeal of DOMA, it’s a wondrous comfort to know that when we’re ready to settle down and move permanently to the United States to open up a Bed and Breakfast in Vermont, no law or policy will tell us we can’t.

Thankfully, the bitterness eating away at me for almost 8 years has started to dissipate. The sting of discrimination is happily becoming a memory. I no longer feel forced to live in exile.

Ligeia, a US-American, and Mindy, a Canadian are a traveling duo currently calling Chiang Mai, Thailand home. Both vegan, Ligeia is an ESL language instructor and Mindy works in freelance web design, both professions allowing for a nomadic life. Follow their journey at BoundingOverOurSteps.com, or on Facebook and Twitter.

Are you a bi-national same-sex couple? How do issues like marriage equality and immigration policy affect your lives together? 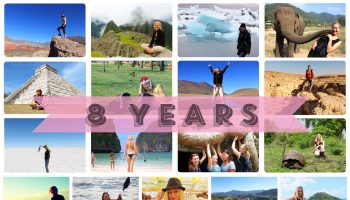