Argentina Polaroid of the Week by Dani on April 4, 2013 5 comments Polaroid 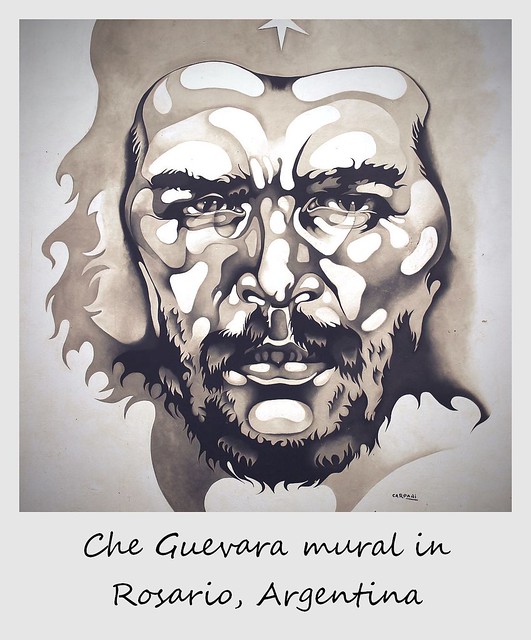 We spent the last week in Rosario, Argentina’s second largest city with over 1.2 million residents. For a city its size, very few foreigners have even heard of it, despite being home to one of the world’s most famous revolutionary figures of all time.

That’s right – while most people associate Ernesto ‘Che’ Guevara with Cuba for obvious reasons – Che was born right here in Rosario, Argentina in 1928 and spent the first years of his life in the city.

No matter where we have ever traveled in the world, that quintessential close-up of Che Guevara’s face is imprinted on tourist trinkets, street art, t-shirts, representing, even in far-flung spots in Laos or India, the fight for equality and justice. And yet after traveling through Argentina now for more than three months, we have noticed that Che is hardly celebrated in his home country, his likeness on surprisingly few products at all. While famous footballer Diego Maradona and Evita Peron are the face of Argentina legend, images, mention, museums, artwork of Che Guevara is a rare find indeed.

Are they ashamed of him? Indifferent to one of their most famous exports, we wondered?

Even in his birthplace, what there is of Che, is heavily muted. The house he lived in as a child is marked with a sign, but is not open to the public, and there is a mural in La Plaza de Cooperacion de Rosario. The only statue commemorating him is a slightly larger than life bronze sculpture in an off-the-beaten path park.

The people of Rosario handed in their metal door keys, which were melted down to create the statue. Although it seems truly fitting that Che’s hometown statue be made of, by and for the people, but Jess and I were both affected by how small the statue of this globally famous leader was. A local friend answered with a question so obvious, we couldn’t believe we’d missed it. Wouldn’t it be wrong if we built an ostentatious, expensive, capitalist shrine of Che Guevara, he asked? Very true, indeed. Maybe the Argentines are just being as subtle as Che himself would have wanted?