Photography by Jess on February 5, 2013 10 comments santiago de chile She Said She Said

We spend nearly twenty-four hours a day seven days a week traveling together and share a whole host of things in common, but we definitely don’t always see eye to eye on everything. Instead of merging our opinions into one, we started a new series recently, She Said, She Said, where we both tell our side of the story about events and experiences while we travel. In this article in the series, we are sharing our views on an afternoon exploring the historic Lastarria neighborhood of Santiago with FotoRuta, a unique street photography tour. Jess shares her views on the tour from a non-photographer’s perspective, while Dani tells how she felt about it as an avid photographer and dSLR user.

When we first found out that FotoRuta photography tours had expanded to Santiago, I thought it was something for Dani to do while we were in the city one day. But when Dani invited me along, I thought, why not. I don’t even have a real camera, just my iPod Touch, but it turns out that was all I needed. I definitely recommend the tour to people who, like me, think they stink at photography, and here’s why.

First of all, FotoRuta is not a traditional tour, as there is not even really a guide. Part photography course, part afternoon stroll, we started by gathering in a cozy basement of a cafe in the Lastarria area of Santiago with Cat, our ‘tour leader’, who spent about an hour teaching us about different photography methods and techniques, which was hugely valuable for those of us with no real photography experience. We were then given a list of clues to find and photograph in the neighborhood for an hour and a half.

The neighborhood is easily one of Santiago’s most charming quarters, so it was really fun sort of strolling about looking for creative ways to interpret clues like ‘Three’s a Crowd’, ‘Artistic License’, ‘Mirror Mirror’ or ‘Level Headed’.

It was fun to be creative with Dani in the context of the tour, because although we spend so much time wandering city streets together around the world, we stopped and smelled the roses in a different way than we normally do. In the end, Dani captured most of the images, but I took the time to employ the techniques we learned at the start, which has since really inspired me to improve and put more thought into how I compose my own photos. I can already sense a massive improvement and not only because my thumb and index fingers no longer feature in every other picture.

Afterwards we returned to the cafe for a glass of wine and time to go over everyone’s photos. Our group was not particularly skilled in photography, but the mood was friendly and there were definitely a few gems to be seen. I personally found that this part dragged a bit, but overall I thought the tour was a great experience – even for Chilean locals or expats based in Santiago as a way to see their own city in a different light. I know there are some people out there who prefer to only take in the main sights on sightseeing tours, but I imagine that any savvy traveler out there would enjoy this as more than a photography course or an enjoyable afternoon, but as a way to creatively focus their lens on real, genuine, authentic Santiago moments. What is travel all about if not that!

Just before we left Buenos Aires, I came across a photo tour online that was described as a ‘photography scavenger hunt’ across the city and was crushed that we had run out of time for it. Until, that is, I discovered that FotoRuta had just started to run tours in Santiago – our next stop. Jess wanted me to do it by myself, being the photographer, but I suggested she should come along and see if she could learn some techniques that would encourage her to take more photos with her iPod Touch.

So we booked ourselves on the next available tour and I was excited to talk photography and uncover Santiago from a different angle. I had taken two photography classes a few years ago and was hoping to pick up a few new tricks on camera handling and shooting techniques. The first hour was allocated to technical tips with our ‘guide’ Cat, but this was more of a refresher than anything new, and it was good to be reminded of some rules and tricks. The group was a mix of photography buffs with dSLR cameras, those with digital cameras, iPhonographers and the new species of iPad photographers.

Just before the introductory hour ended, Cat handed us our clues and a map of the area that we were about to explore. The clues, ten in total, were left to us to interpret and to transform into photos, and included things like ‘hand in hand’ (one of the easier ones), ‘simply ridiculous’ and ‘It’s a mystery’. We were ready to team up with other people in the group, but since the other couples stuck together, Jess and I headed out together as well.

FotoRuta is not like an ordinary tour with a guide who leads you around – instead you are given one and a half hours to meander through the neighborhood and find objects or scenes that you can photograph for one of the clues. This meant that we didn’t necessarily learn much in terms of factual information about the history of the Lastarria barrio, instead on the hunt for unusual things or interesting occurrences as we wandered the streets.

I have to admit that it was much more difficult to find a photo for each clue than I had expected. Some of them were fairly easy, but others left us with a big question mark on our faces. In the end, we pulled together a photo for all ten clues and the 90 minutes flew by! All of us gathered again in the little cafe where we had started and Cat asked us to submit one photo per team per clue. Over a glass of wine, we looked at the pictures that everyone had taken and listened to the explanations of why the person had taken it (if it was not obvious). I really enjoyed seeing how the other people had interpreted the clues and what objects they had found to photograph. All in all, it was a fantastic way to spend an afternoon of photography and exploration in one of Santiago’s most beautiful neighborhoods.

How much is it?

Tours are $29 and last about four hours.

Who is it for?

We both agree that FotoRuta is a great tour for anyone with even just a mild interest in photography and looking for a different kind of tour, exploring more off-the-beaten-path areas of a city instead of the major sights.

Where can you find out more?

Check out FotoRuta online to see all tour options and prices: www.Foto-Ruta.com. 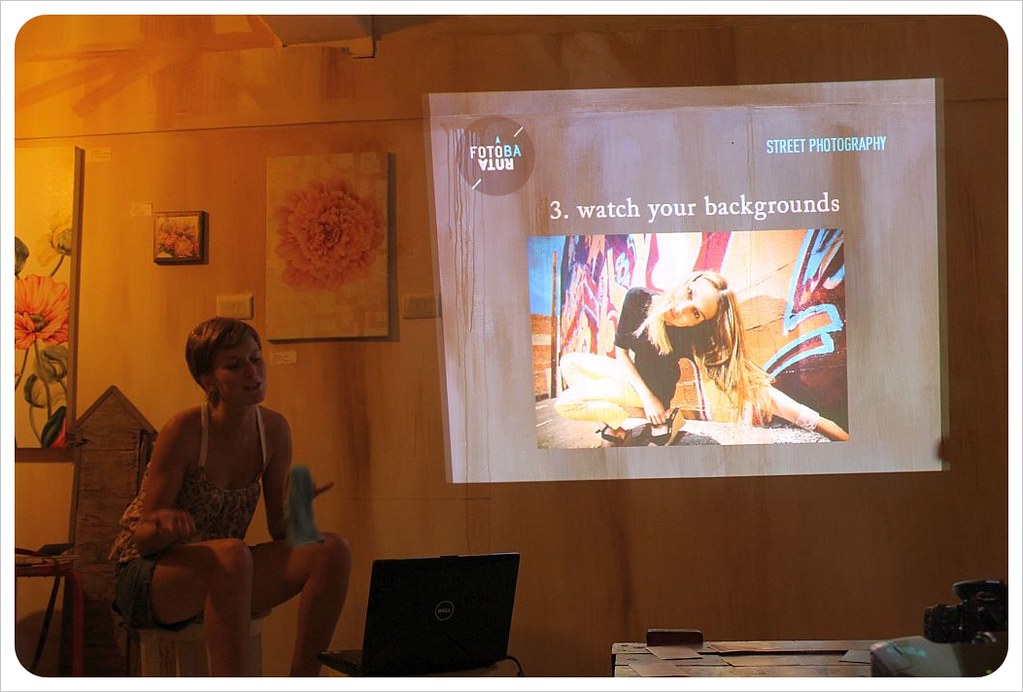