We have been to Tucson several times now and spent a month there during each visit. Even though every time we visited, it was during one of the hottest months, June, with temperatures regularly reaching around 110F, we managed to sightsee quite a bit, we took day trips to nearby destination, found restaurants and coffee shops we liked and fell in love with the Sonoran Desert which surrounds Tucson. And we want to share some of our best finds in this Tucson travel guide with you – just know that this guide is by no means complete, because one thing we have discovered is that Tucson is an ever changing city. Every time we visit, there’s a new cool cafe, a new trendy restaurant, a new mural to check out.

If you visit Tucson without a car, we recommend renting a car at least for a day or two, since many of our favorite places can only be reached by car. The center is rather small, and the city is very spread out, and some of the best things we’ve done were actually outside of the city center. 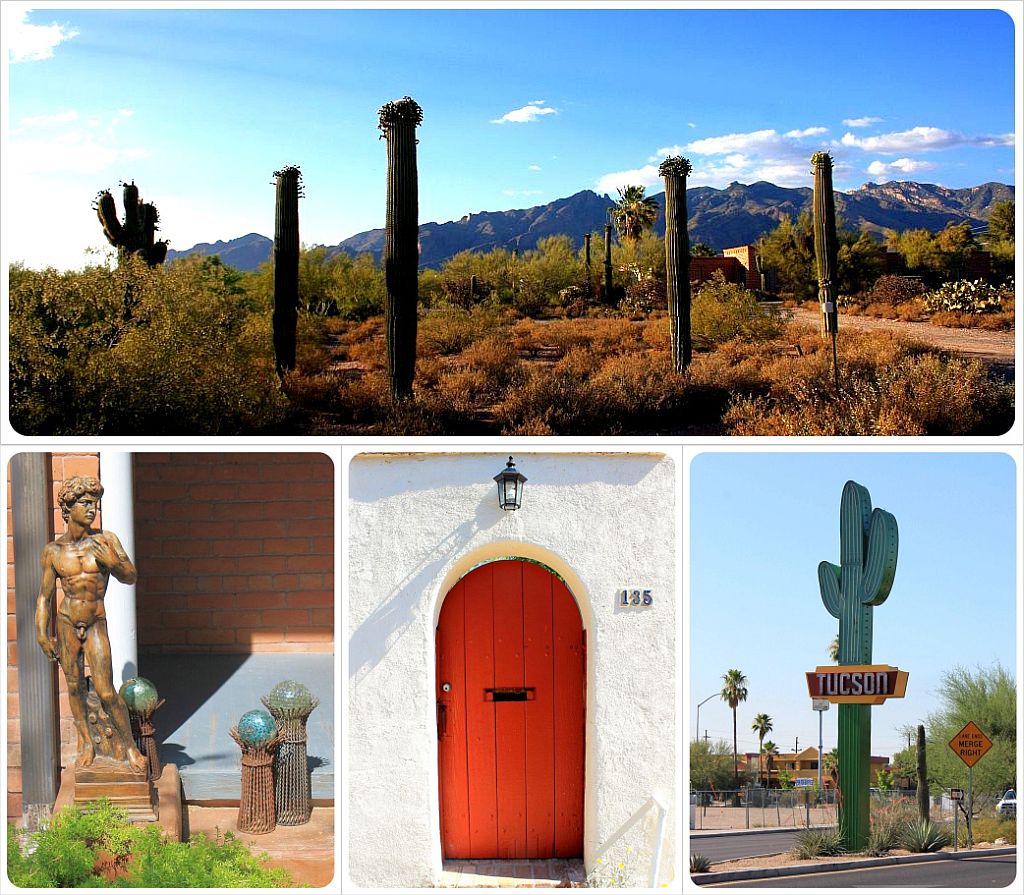 Tucson is the second largest city in Arizona and sits at an elevation of 2,400. The Sonoran Desert makes for a favorable climate during the winter months, while it can get unbearably hot in the summer. The city itself has a moderate population of 486,700 people, but the entire metropolitan area counts over 1 million people.

Tucson is also known as ‘The Old Pueblo’, built upon a foundation of Native American, Mexican, Spanish and Old West roots. Especially the city’s Spanish and Mexican influences are still visible everywhere on a stroll through town, especially the historic center. 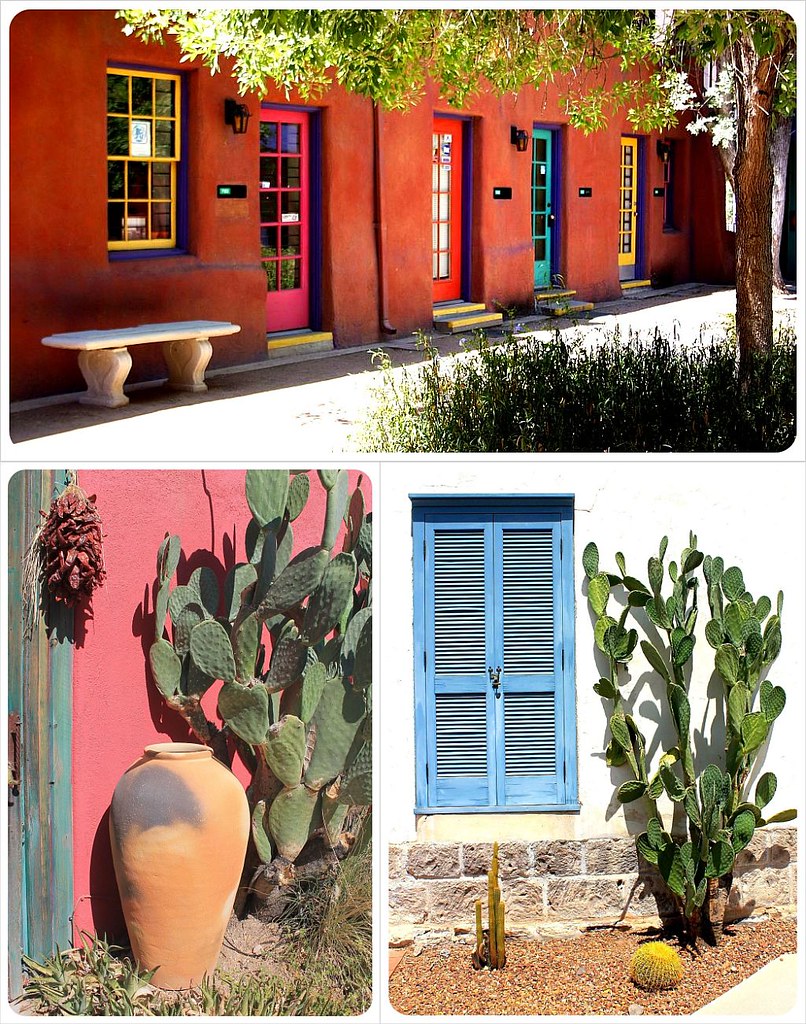 What to do in Tucson, Arizona

Stroll through the historic downtown

Tucson’s historic downtown is known for its colorful adobe houses which have all been restored and are well maintained by its owners. The Spanish Colonial Revival courthouse with its mosaic dome is one of downtown’s most recognizable buildings. Make sure to also visit the beautiful courtyard. Just a few blocks south you find the Cathedral of Saint Augustine, a beautiful church built in Mexican-baroque form. 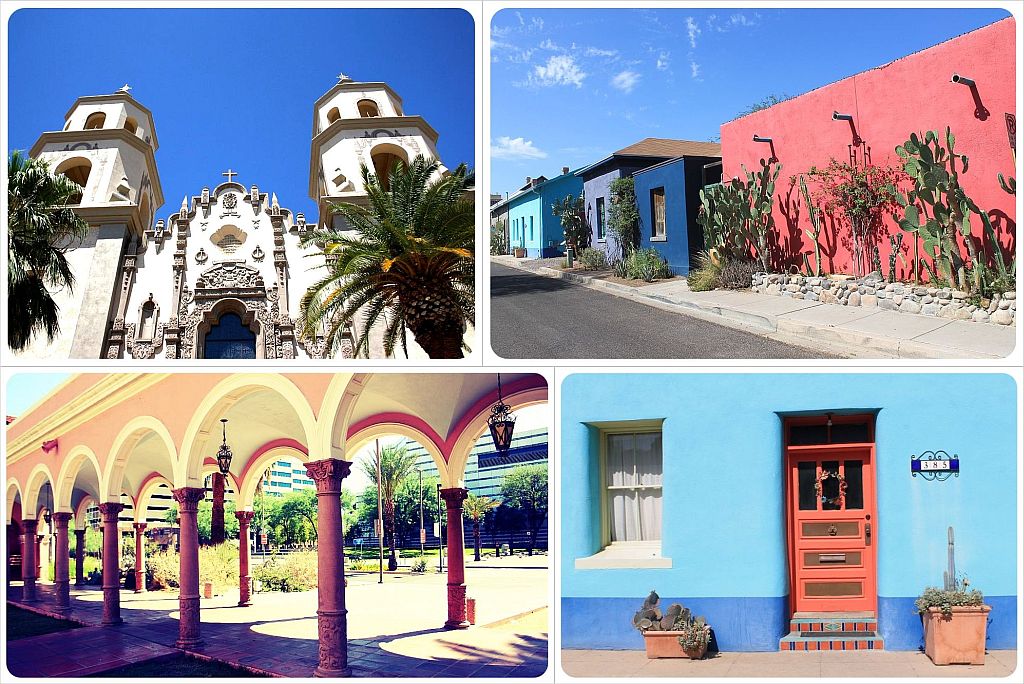 The Old Tucson Studios, just outside of town, are a must visit for all fans of old Wild West movies. They were the backdrop for the gun-slinging Old Western heroes such as John Wayne, Clint East Wood and Paul Newman. A visit to the studios is like a journey back in time, with many of the film sets still intact. There are also daily stunt shows and shootouts. 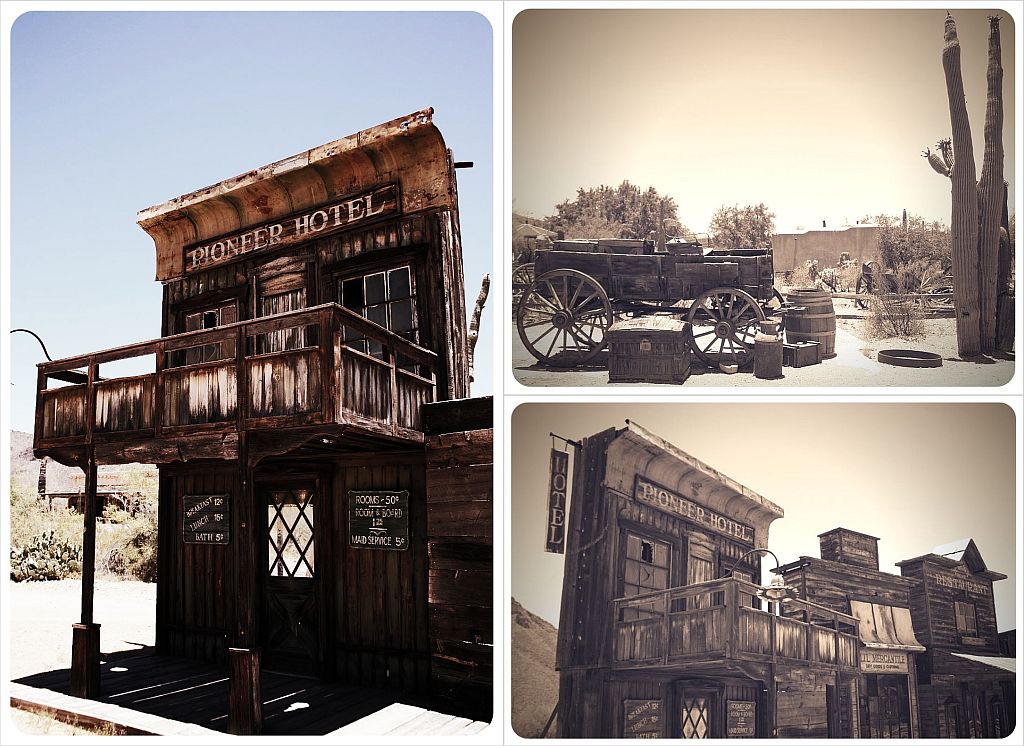 The Desert Museum is just around the corner from the Old Tucson Studios and is more like a biosphere than a museum. Part zoo, part botanical garden and part natural history museum, you can learn everything about life in the Sonoran Desert, see many of its inhabitants such as coyotes, scorpions, snakes and tarantulas, and the incredibly diverse flora and fauna. 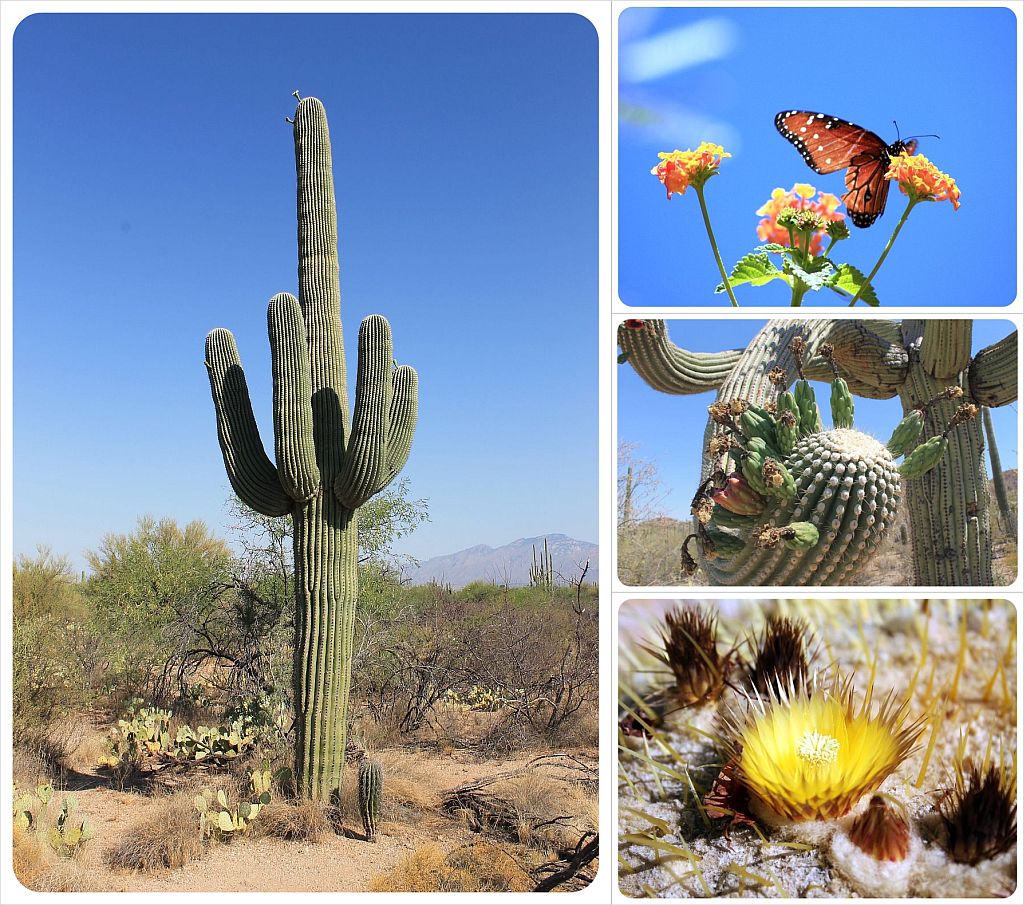 While you are at the Desert Museum, you might consider combining the trip with a visit to the Saguaro National Park, just a few miles down the road. Saguaro National Park should be included in every Tucson travel guide, because the scenery is stunning and so unique. There are hiking paths or a road through the park with several lookouts. It is the most dense forest of Saguaro cacti in the U.S., with over one million Saguaros. 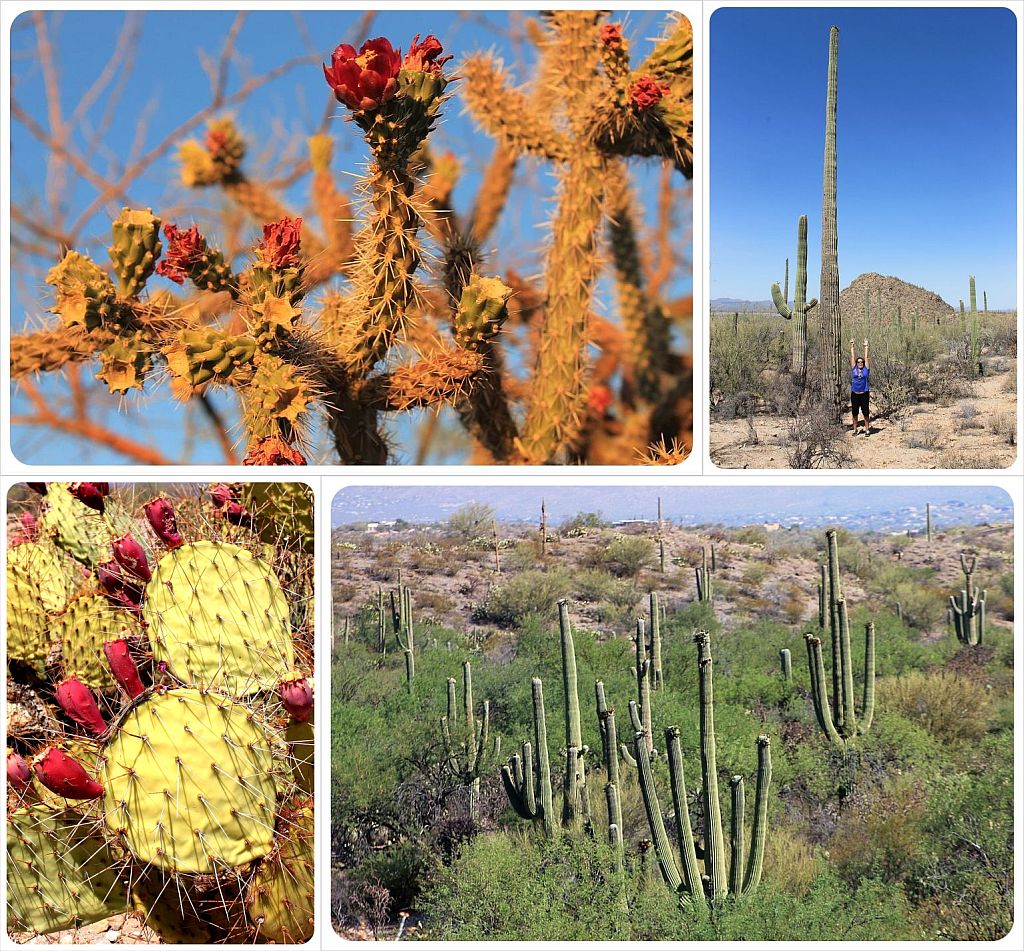 4th Avenue is a popular road with a large number of restaurants, cafes, bars and nightclubs. At the time of our last visit, the historic 4th Avenue tram line was in the process of being restored, and a stroll along this road, which is popular with university students, can be combined with lunch or a coffee in one of the many independent restaurants. 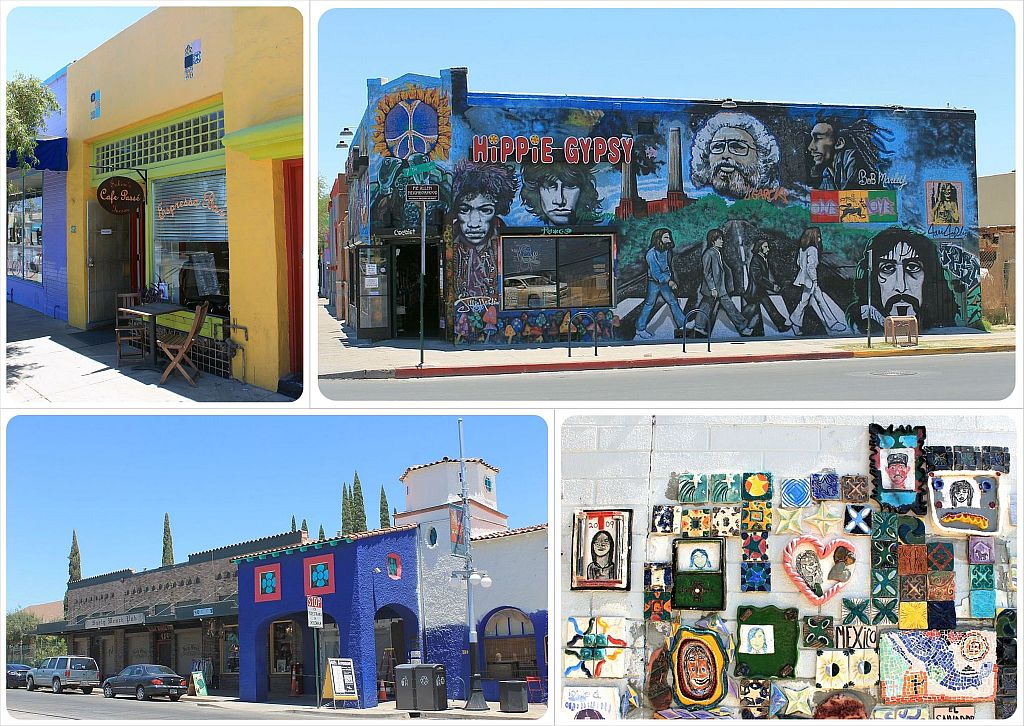 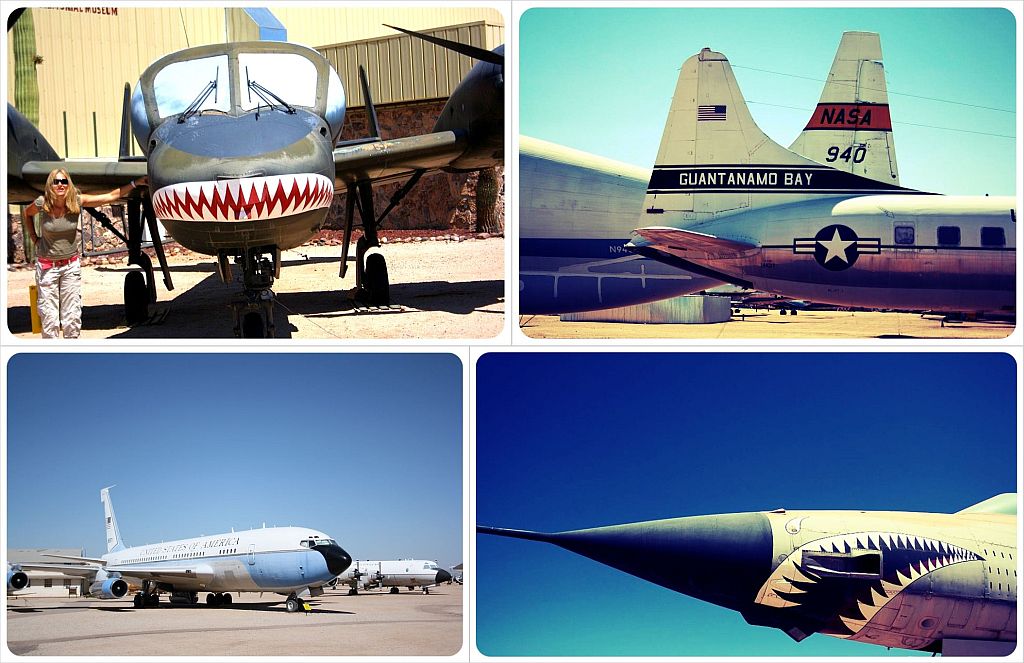 Go on an urban scavenger hunt

This is a truly unique way to explore Tucson: a 3-hour Tucson scavenger hunt! The hunt is played via smartphone, which means you can do it on your own schedule. If you are traveling in a group or as a family, you can play against each other, Amazing Race style. Every team has to solve clues and challenges while learning about the history of downtown Tucson.

The Best Day Trips from Tucson

Mount Lemmon is a short drive northeast of the city, and was a welcome cool off from the summer heat for us. On the way up the mountain, you will pass through some of the Sonoran Desert with stunning views over Tucson, and when you finally reach the top, you will find yourself surrounded by pine forests. At 9,157 feet (2,791 m), it is the highest point of the Santa Catalina Mountains, and you can enjoy a hike along one of the many paths or just enjoy the several scenic lookouts along the winding mountain road. 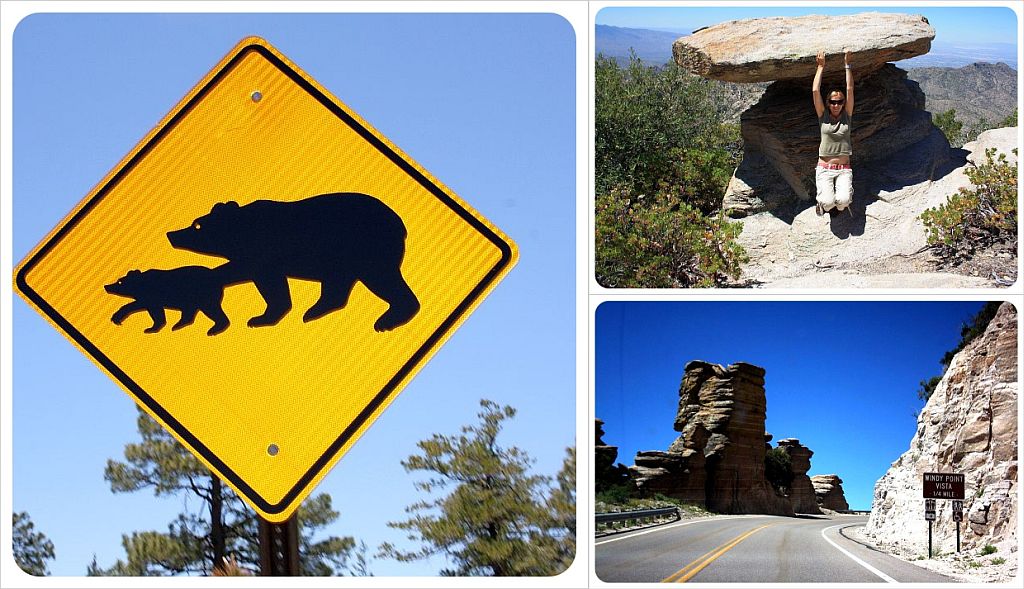 Sabino Canyon is a desert canyon that is cut into the Santa Catalina Mountains, just north of Tucson. There is a tram with 9 stops which will take visitors into the Canyon, and you can choose on which trailhead to exit. The most popular hike is the Seven Falls Trail. Sabino Canyon can be visited with a National Park Pass ($5 per day.)

This gorgeous mission, nicknamed ‘White Dove of the desert’, is a white little mission, set in the middle of the desert, which is one of the best preserved missions in the area. Founded in 1692 when Arizona was still New Spain, the mission is the oldest Catholic church in the United States. The mission combines elements of Spanish, Moorish and baroque styles, and inside you can see a selection of statues and frescoes. If you don’t have time for any other day trips listed in our Tucson travel guide, you should head to Mission San Xavier Del Bac. It’s only a short 20-minute drive south of downtown Tucson, doesn’t require a whole lot of time, and is well worth a visit. 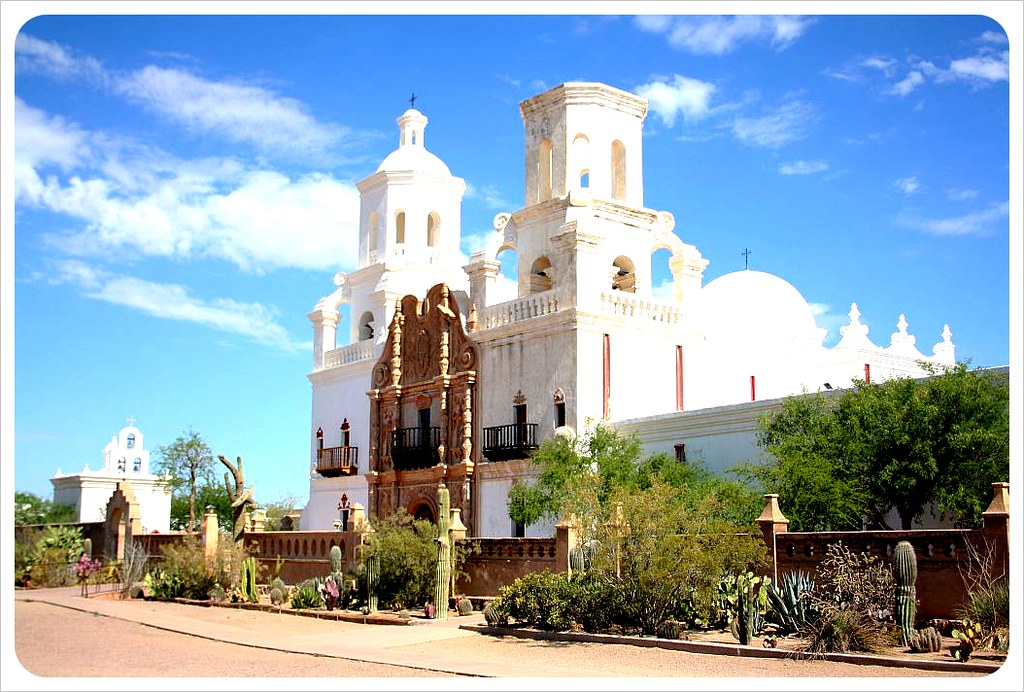 A little further away, Tombstone and Bisbee can still be visited in a day trip, and you can easily fit in both towns. The 70 miles from Tucson to Tombstone will take you around 1 hour and 20 minutes, and it takes another 30 minutes to get from Tombstone to Bisbee. Tombstone is known for its old Western image, having been the home of Wyatt Earp, Doc Holliday and many other Wild West heroes. The little Western town still looks like in its heyday 130 years ago, with several saloons, cowboys roaming the town and of course the famous gunfight at the O.K. Corral which is re-enacted daily. 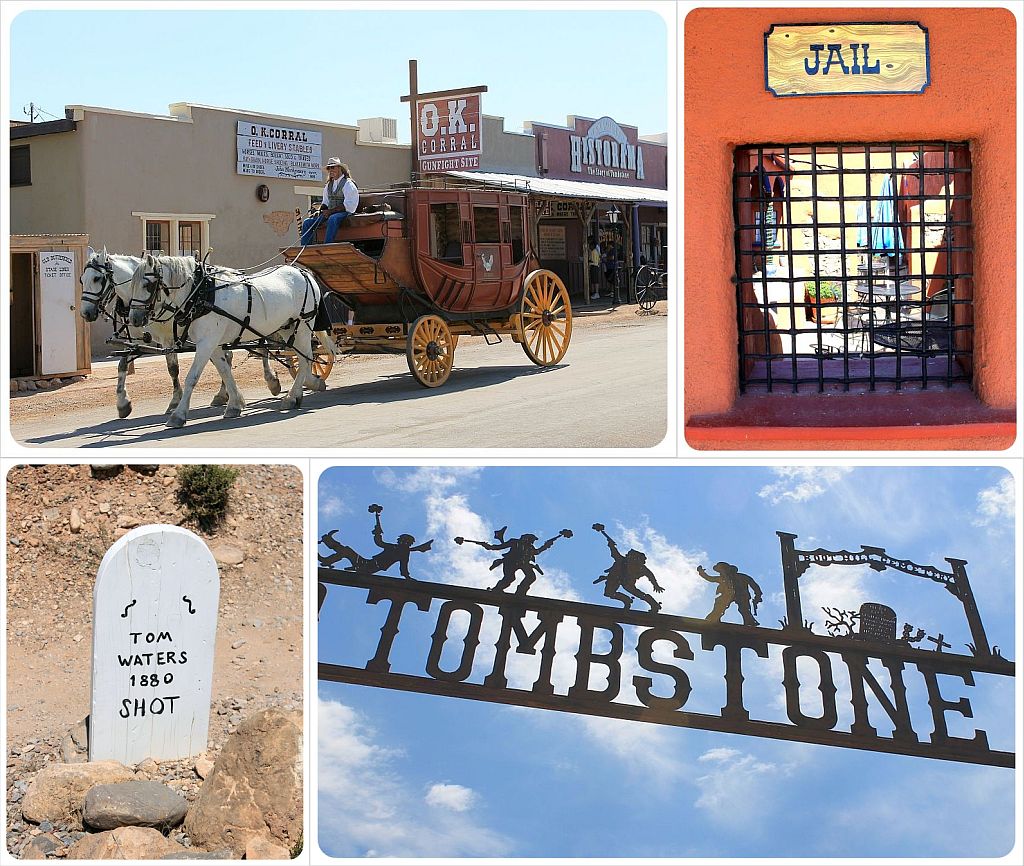 Bisbee, a former mining town, has now transformed in a creative community of artists and is a pleasant little town to spend an afternoon in. There are plenty of art galleries, restaurants and cafes, specialty shops and the Copper Mine which can be toured. The charming little town of only 6,200 people is perched on the hillsides of the surrounding mountains and features some beautiful Victorian-style houses and an art-deco courthouse. 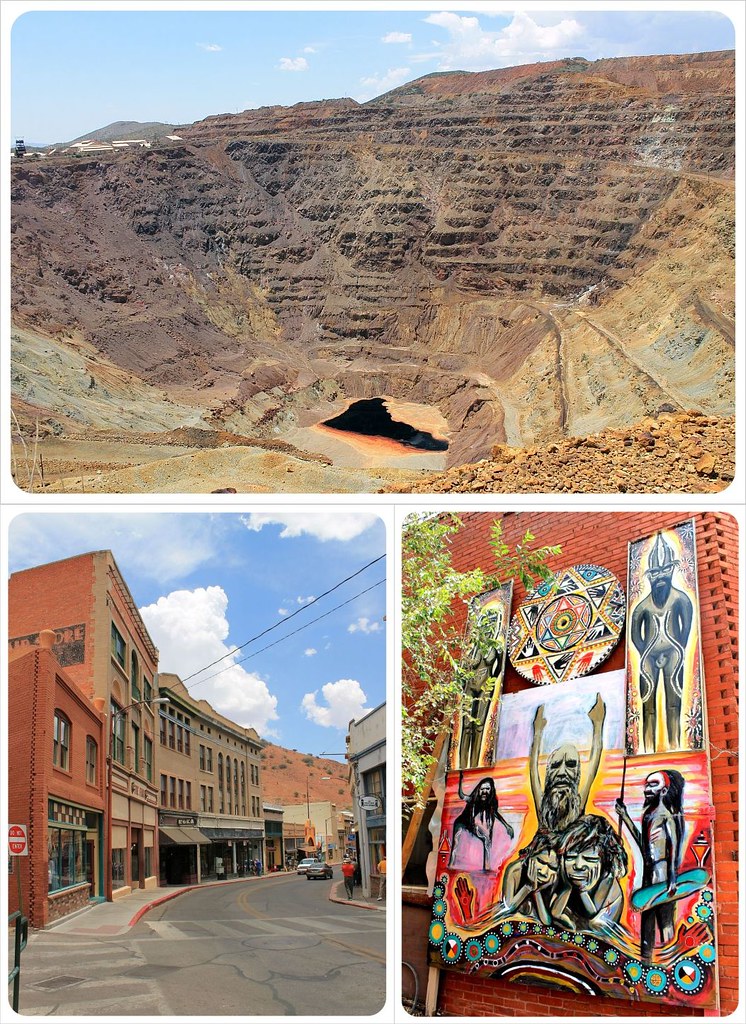 Where to eat in Tucson, Arizona 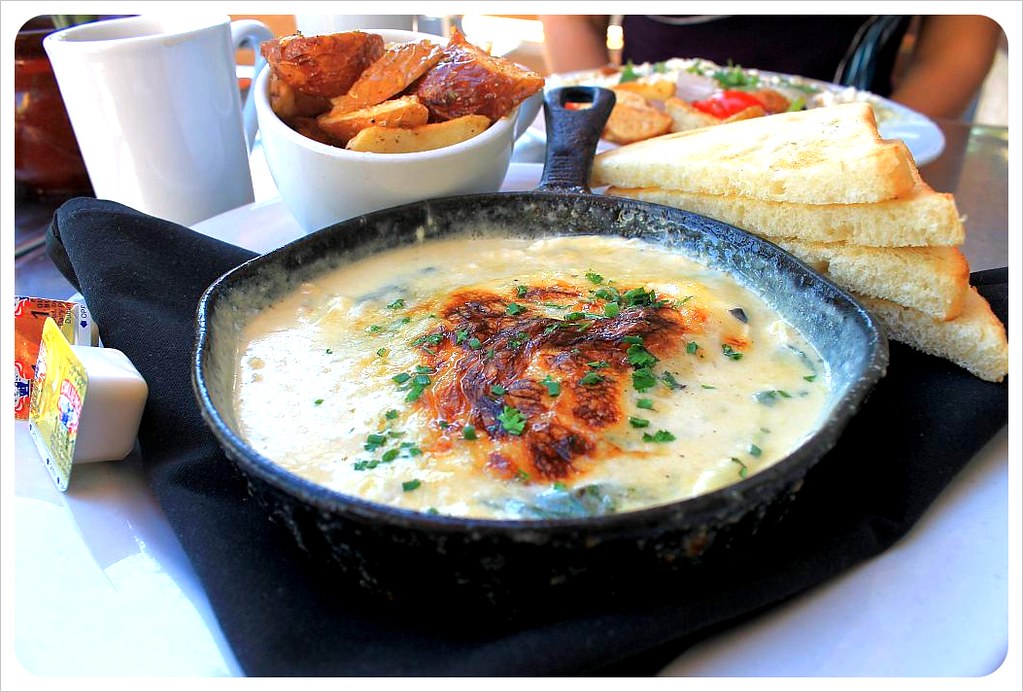 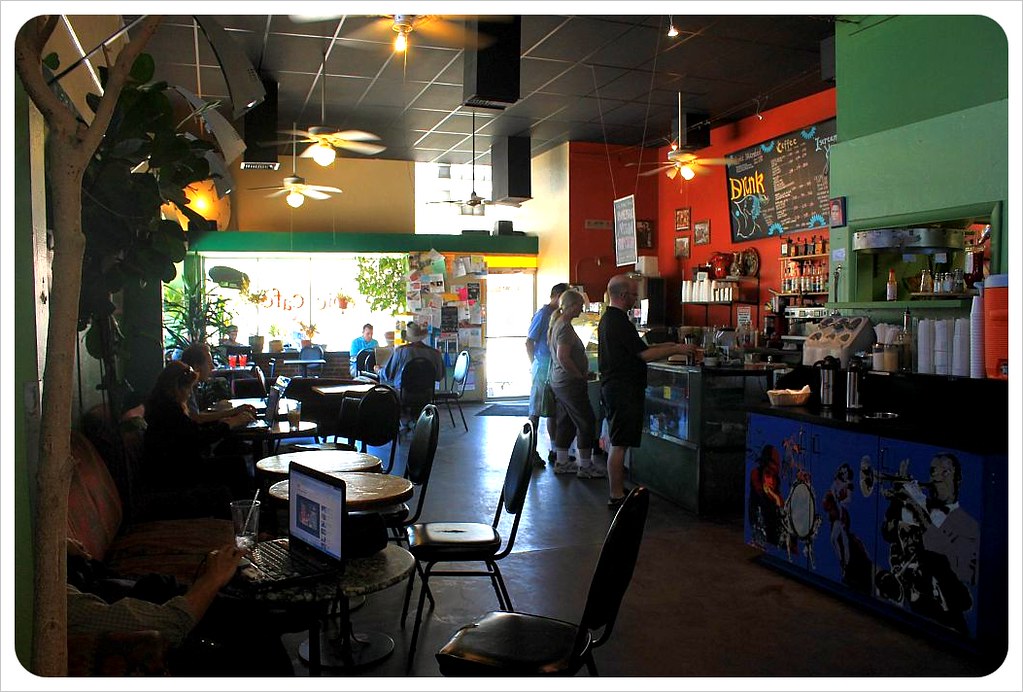 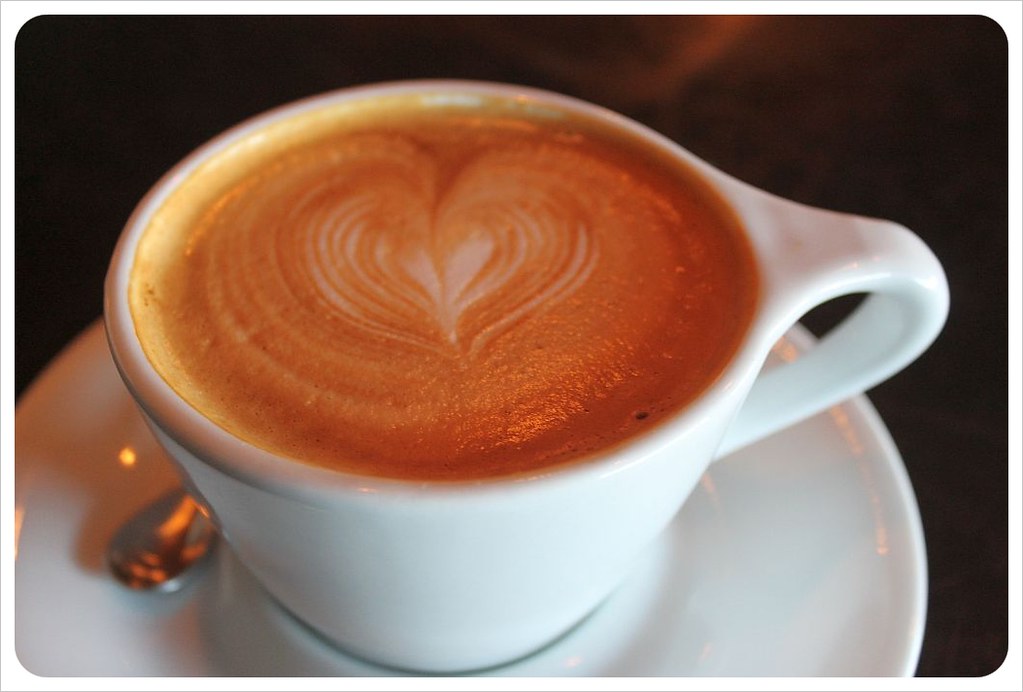 Where to stay in Tucson, Arizona

You can find every major hotel and motel chain in Tucson, as well as RV parks and camp sites, but in my Tucson travel guide I wanted to highlight some hotels that aren’t chains or if they are, they’re worth a splurge. 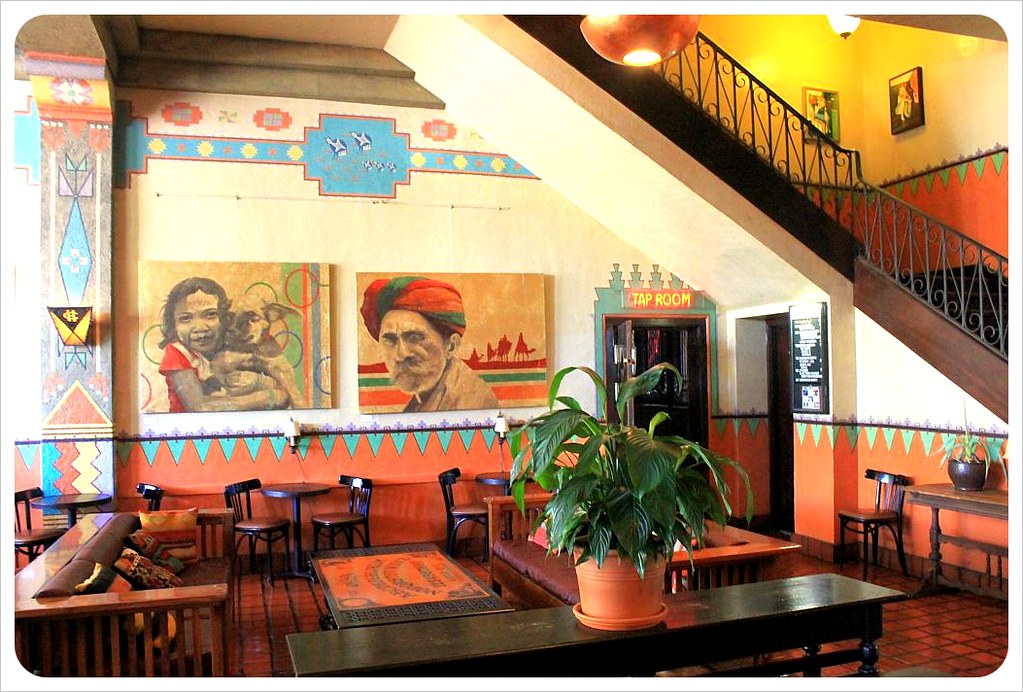 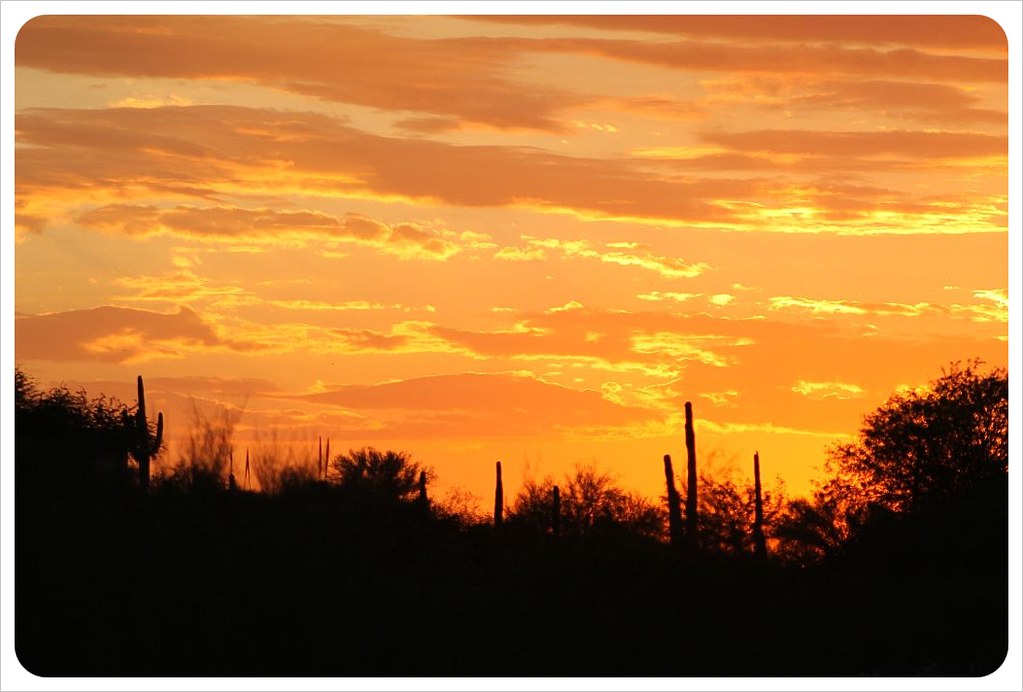 Have you been to Tucson? What would you say belongs in a Tucson travel guide?

Things to Know Before Visiting Israel, The Holy Land