It was Jaime who broke the silence.

The four of us were reading or staring out at the water. Val hadn’t spoken in hours, not that Dani or I would have heard. Taking in the view consumed all our attention. 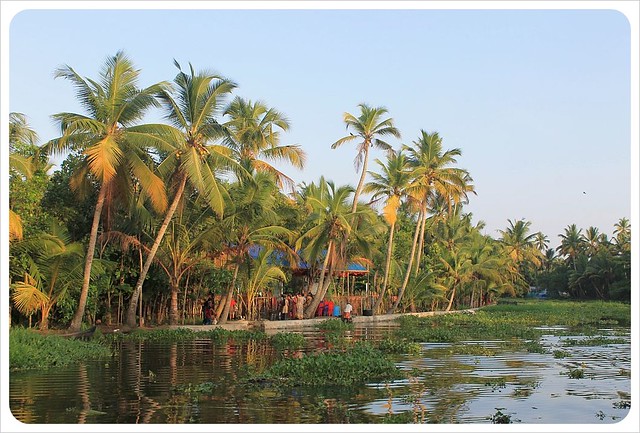 We all agreed, nodding dreamily. Having spent two full days on board our houseboat, we had entered into a prolonged state of calm usually reserved for the end of an intense hour-long massage.

Our Kerala backwaters tour was easily the highlight of our time in India, and we didn’t want it to end. In fact, although we originally scheduled two nights, we extended to a third night to keep this relaxed feeling alive. We were very aware that this might be a major highlight or could be an utter failure, so choosing wisely was our main goal. After searching for the right boat and crew for a couple of days prior, we couldn’t have been more satisfied with our choice. 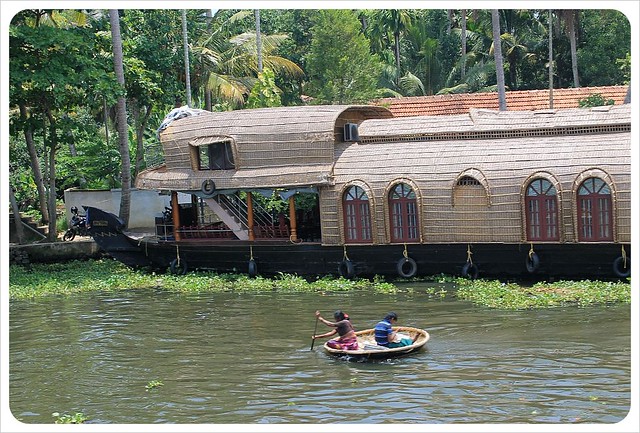 When I first heard ‘backwaters’ I imagined dark, brackish water muddled with mangroves. Instead, this area is made up of miles and miles of dark blue water, as far as the eye can see. The backwaters cover almost all of the state of Kerala. The water is laid out almost as if it were fields, like a patchwork quilt, sewn together into squares by single rows of palm trees growing out of land not more than a meter across, where the next ‘field’ of water begins. 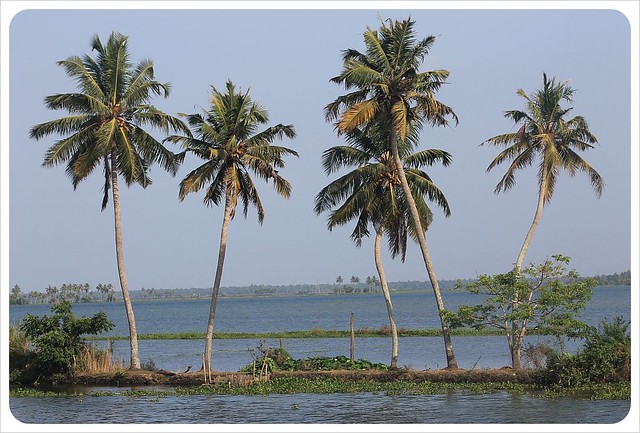 At other times, the water becomes more like a river or narrows into a brook, surrounded on either side by dry land dotted with two or three houses, a few schools, shops, even bright pink catholic churches are sprinkled into the view, and occasionally we pass an actual village.

Our boat is somewhere comfortably between the surprisingly luxurious options and the rust bucket rip-offs we were shown for the exact same price as ours. For $35 per person per night, our houseboat has two double rooms, both en-suite bathrooms are no smaller than what Dani and I had on our Mediterranean cruise. The downstairs has a nice table where we eat our meals, but most our time is spent upstairs under the thatch roof, where we have a chaise lounge of sorts, a couch, two chairs and the rounded front is also fully cushioned. 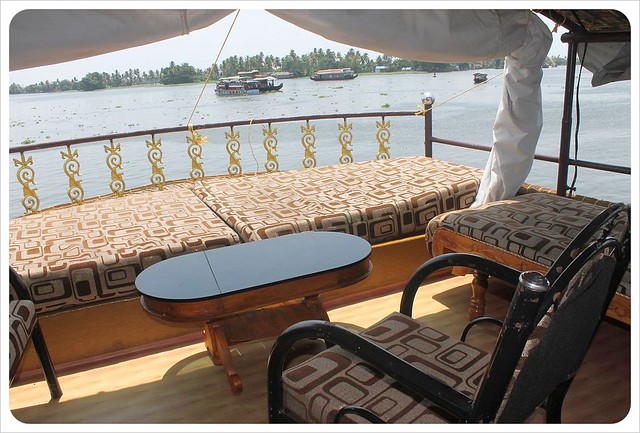 Our crew is made up of a captain and a chef, neither of whom speak any English at all, so we speak only to say thank you for the amazing meals. The three days we spend gliding through endless palm trees feel like a series of moments woven together by the glide of the boat and our meal times. We wake up around 8am and are served coffee and tea while we wait for an authentic Keralan breakfast. The boat sets off around 9:30 each morning, though we wish it would leave earlier so we could have more time watching this incredible world go by. At 1pm the boat stops wherever it is and we eat lunch, the largest meal of the day. 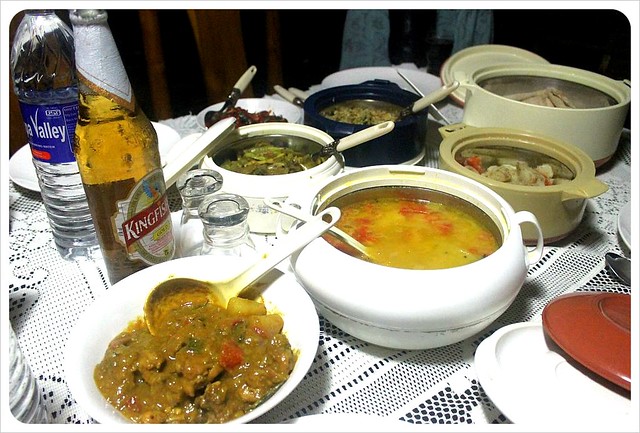 We are served two or three curries, a soup, vegetable dishes, both cold and hot, plus rice and chapathi bread. Just as the heat breaks, around 4pm, we are served coffee and tea again, with a sweet snack and then, after crossing the lake, we head back into a quiet little inlet and are served dinner just after the sun sets, around 7.30pm. Who would’ve that we would have some of the best food in all of India on our Kerala backwaters tour.

The rest of the day is punctuated by intimate moments, like the exotic bird that lands on the railing upstairs, flirts with our cameras and then flies away or the group of bright yellow butterflies that flutter alongside the boat until we slowly but surely outpace them. Kids with big smiles and wide eyes wave at us as we pass, their mothers standing on steps that lead into the water, smacking the water out of the clothing they beat on the laundry stone. 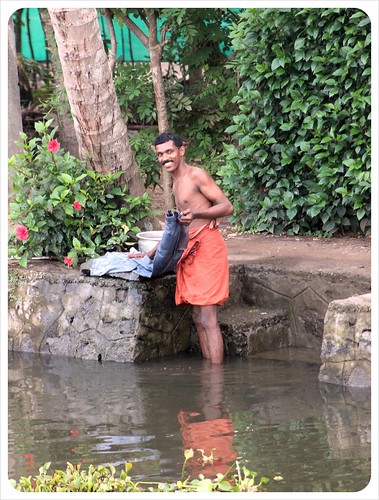 In the mornings, we pass people standing on those same steps, brushing their teeth or lathered in thick white soap which they wash right off into the water. The water is their source of life, and where everything takes place: washing, fishing, bathing, and every so often a motor boat nearly sinking, stocked bricks, or steel or sandbags speeds by with the materials to build one more house somewhere out here.

One morning before we set sail, two boys came by with a rabbit and her tiny bunnies in a box. We rubbed the bunnies’ furry little bellies and laughed with the boys and the captain of the boat, who we think is from here, but since he doesn’t speak English, this is the most time he spends with us the whole trip. The moment was so simple and sweet, and ended with a polite ‘Bye, bye!’ and off they went.

In the afternoon on the second day, we were tooling along and approaching a smaller water channel, when suddenly thousands of ducks started pouring out of the channel into the main river alongside our boat. Not much faster than these ducks, we were able to watch as the last of the thousands of birds rounded the corner and floated together in a unified migration wherever it was they were headed. 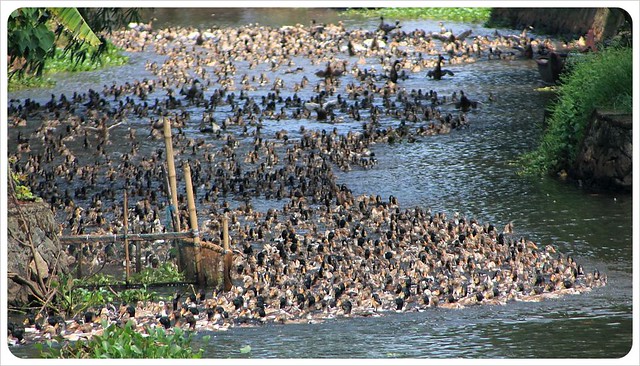 The first night, before the relaxation seeped into every cell of our bodies, we stayed up drinking and talking until late. The second and third nights we spent watching Modern Family, swapping stories or just relaxing. If it weren’t for the bit of caffeine we drank twice a day, I am not sure I would have made it out of sleep mode by the third day at all.

It feels like nothing could go wrong the in the world, which is shocking considering that most of the time we spend in a moving vehicle in India the hectic pace, incessant honking, brake slamming and near misses make me hyper-aware of just how many things could go wrong at any moment. But that is India, a land of contrasts, of extremes. And a Kerala backwater tour shows you a side of this country that not a lot of people get to see. 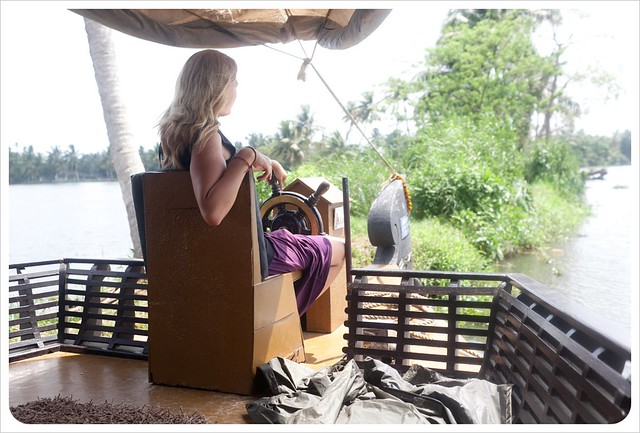 In fact, it makes sense that it is here, in India, where the pendulum could swing so far away from the mania in the cities over to such an utterly peaceful place.

Here are some of our favorite pictures from our houseboat experience: