So, I’ve got a beef with India: The cows.

Who let all the cows loose? Seriously! When I say all the cows, I really mean ALL the cows. Considered holy in India, cows roam free everything. Chewing grass on the side of the street, wandering across it on a whim while the thousands of cars, tuk tuks and buses swerve around them and no one, not the drivers or the cows, seem to bat an eye. At first, I loved this about India. I love that the majority of the over one billion people in this country are vegetarian and wouldn’t eat, or even harm, a cow. 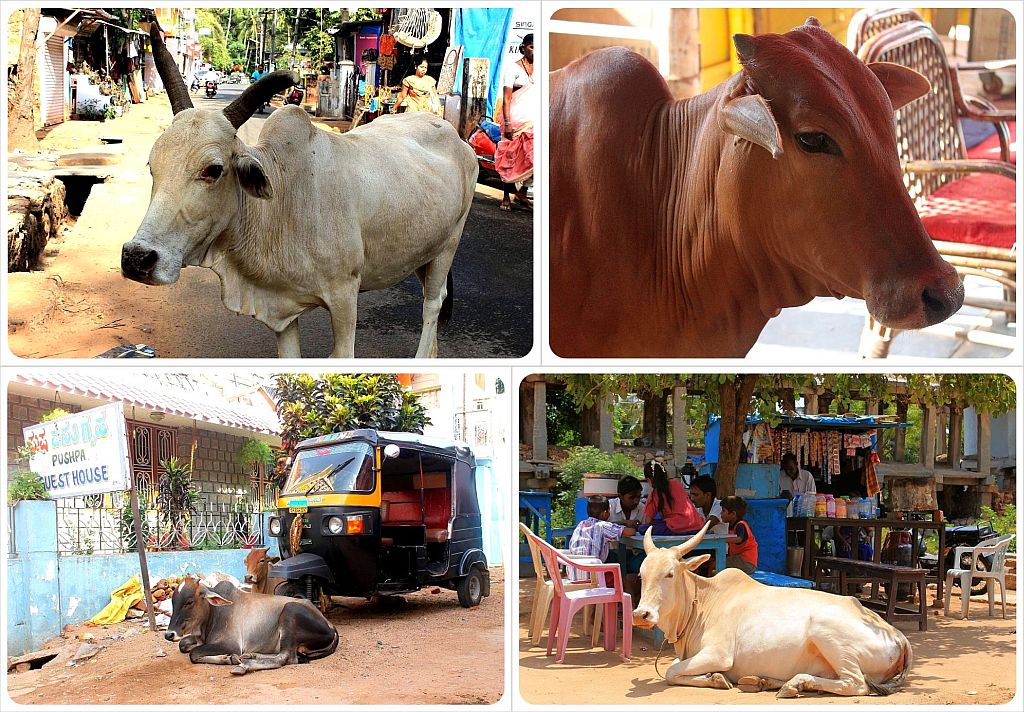 In fact, I’ve never eaten meat in my entire life. Dani and I are the only two Westerners I have ever met who have never even eaten a common hamburger.

But that sure didn’t help my cow karma, considering that last Sunday, on the way to eat pizza after watching a gorgeous sunset on the beach in Goa, I was rammed and flipped by a cow.

Now, before I start defending the cow – which I will – let me just say a few things. First of all, it hurt like hell. I didn’t exactly feel it as his head rammed into the back of my upper thighs, but I knew what was happening. I heard Dani yell out, and felt this sort of whoosh, suddenly aware that I was up in the air. Within a split second, I crashed down onto the pavement so hard I thought I broke my pelvis. Before I started screaming, my only thought was to get out of the way, not to get trampled by this aggressive beast. But he just continued down the street without giving me a second glance. His only goal was to get me out of the way. And I don’t blame him, but more on that later. 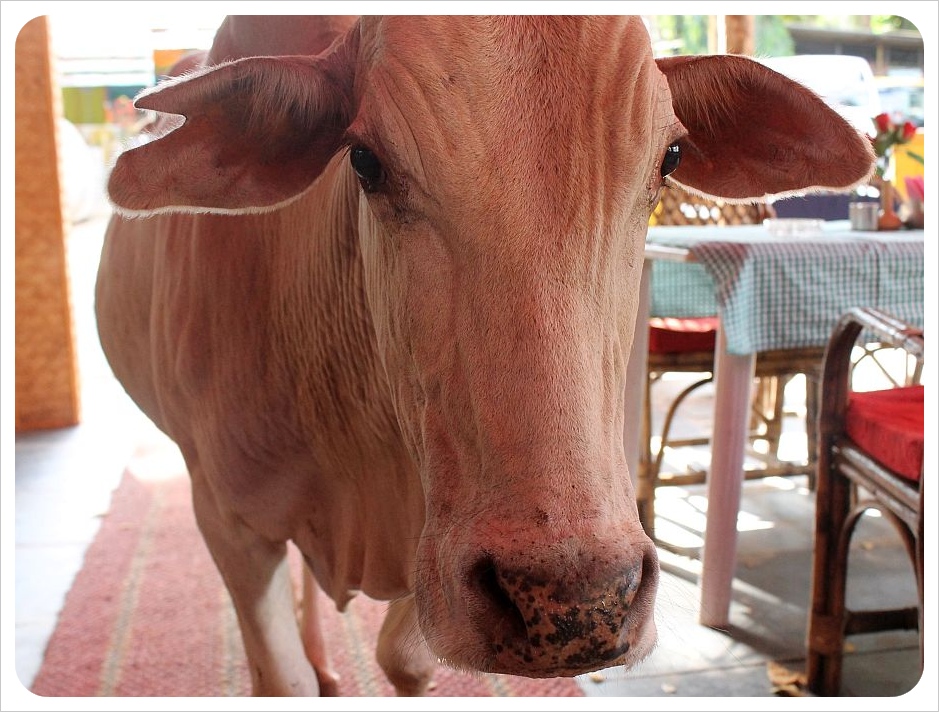 Letting it all out…is this really happening?

After being mercifully spared more damage by the cow, I began screaming, long, loud shrieks, over and over again for about….two long minutes. Locals and tourists were all staring, coming up to me, some wanted to help, some probably just wanted me to shut up. I did, eventually, but I honestly had never felt so many different sharp, acute pains in my body at once. My back felt torn in half, I was sure my pelvis or hip was broken, plus I was worried about my knee.

Looking back on the screaming (a mental image which alternates between humiliating and hilarious) I know that I was not just hurt. I think I also was in the first stages of losing my mind. I had just spent five days going back and forth between hospitals and consultations with orthopedic surgeons after a knee injury sustained two months ago in Thailand flared up so bad I could no longer walk. Luckily the MRI showed that no ligaments were torn, but I was told to stay off my feet and rest for at least another week. It wasn’t just the physical pain, but I also felt like I had been letting Dani down. 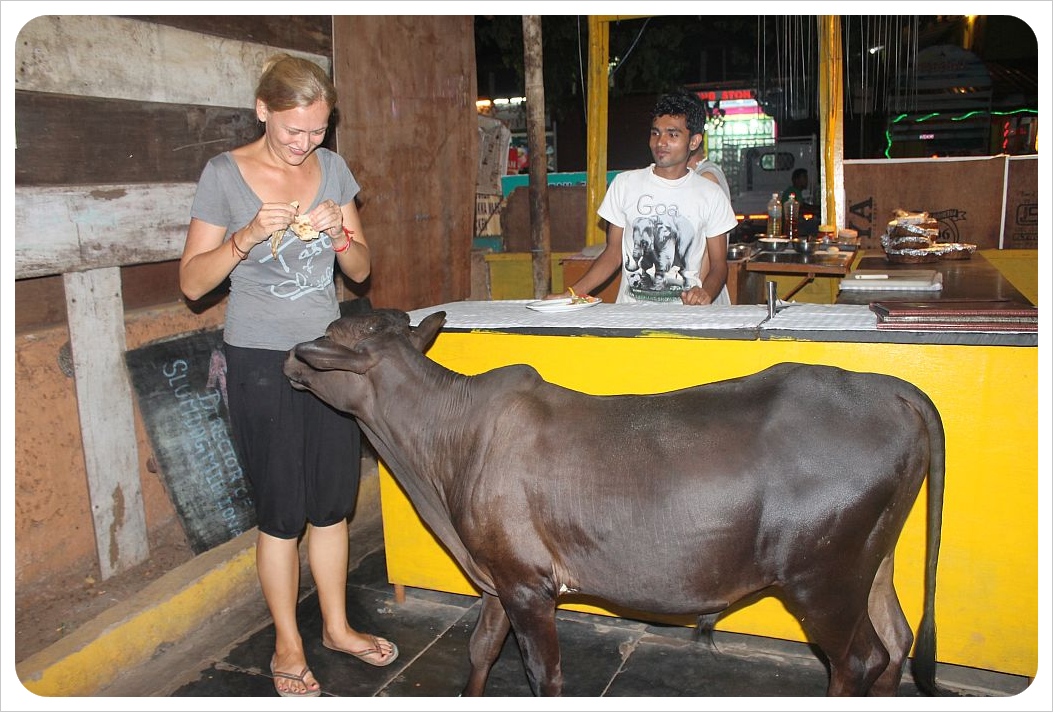 India has really been such a dream for her, and to travel here, you need to be agile. Catching trains, hopping in and out of tuk tuks, walking through temples and towns for hours on end…and I had not been able to do any of this the entire time. That’s why I sent her away with our travel buddies Jaime and Val to Hampi. Go, you guys have a good time and make sure to do a ton of walking around, I told her, while I rest my knee. When you get back, I promised, we will go travel the rest of Goa at least before our flight.

She had just returned the day before, and now, I get trampled? By a COW?!

So, I screamed for it all – the pain, the frustration, more immobility and guilt.  After attempting to get me into a tuk tuk and a taxi, we managed to get me into a minivan (less bending to get in) and off to the hospital. There was no doctor at the first, where the orthopedic had just gone over my MRI results the day before, as he had been called to an emergency, so we headed to the public hospital a few kilometers away. Public hospitals in India are completely free, so despite the seriously appalling service, my scrapes were treated, I was given a tetanus shot, two strong doses of painkillers and then transported by ambulance, also free, to an excellent private hospital 25 km away. In the back of this dirty old ambulance, Dani and I just kept looking at each other with this look…mine was more of pain, hers was this silent look of resignation that, even though she just could not fathom it, this was actually happening.

Had we stayed on the beach a minute longer, had I walked just a little faster, we would have just been finishing our pizza at this point, but instead we were in a rickety ambulance, with an old pine tree air freshener hanging off the dusty defibrillator. (I stared at that air freshener, imagining the scene – “Clear!” shouts the medic. “Oh, sorry, let me just remove this air freshener…” “Damn it, we lost him.”)

Needless to say it was a relief when we pulled in to the private hospital to an army of doctors and nurses who were all there to assist me. The bed was incredibly comfortable, the nurses and doctors spoke perfect English and, after three hours, the X-Rays revealed no break, no fracture and magically nothing even majorly out of alignment, Instead, I was sent home very bruised with a deep muscle contusion in my back and told that I was confined to bed rest for 5-7 days.

Total cost of the hospital visit, which included the full attention of three nurses and one doctor, plus fluid IVs, painkillers, X-Rays and over three hours in one of the nicest hospital facilities I’ve seen around the world – $9.50. Nine dollars and fifty cents. That cheap price, sadly, was the highlight of our evening.

In the taxi back to Palolem Beach (which cost more than the hospital) the driver did his best to avoid cows. It was midnight by this time, and the big, black cows are almost impossible to see in the dark. With white knuckles and still in excruciating pain, I could not take my eyes off the road. The same animal that landed me in the hospital in the first place could possibly send us right back. The irony was almost too perfect, so I figured the chances were pretty good it would happen. But, we arrived safe and sound, and I have been largely on bed rest ever since. 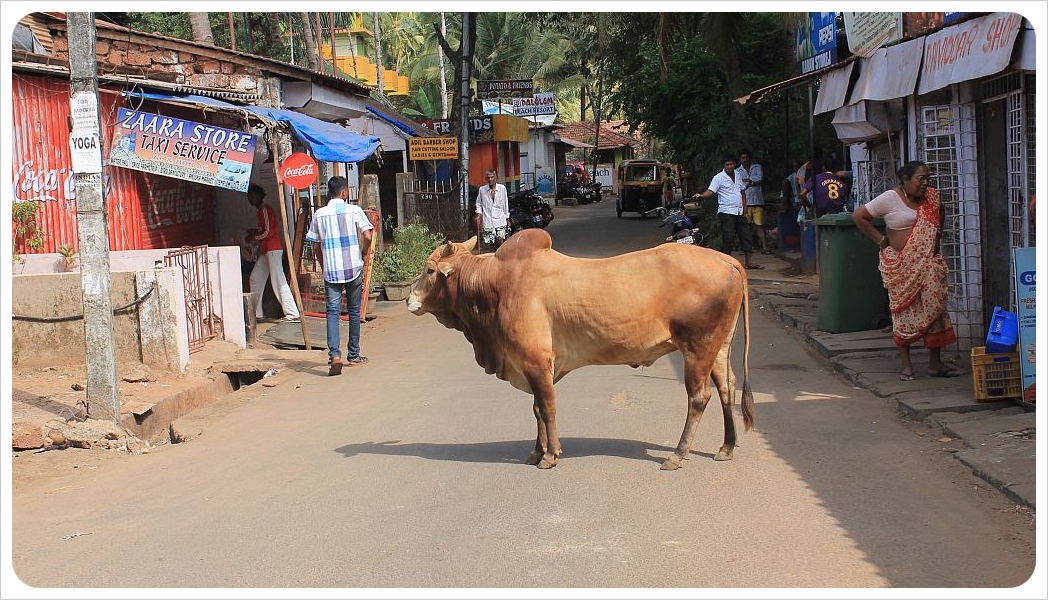 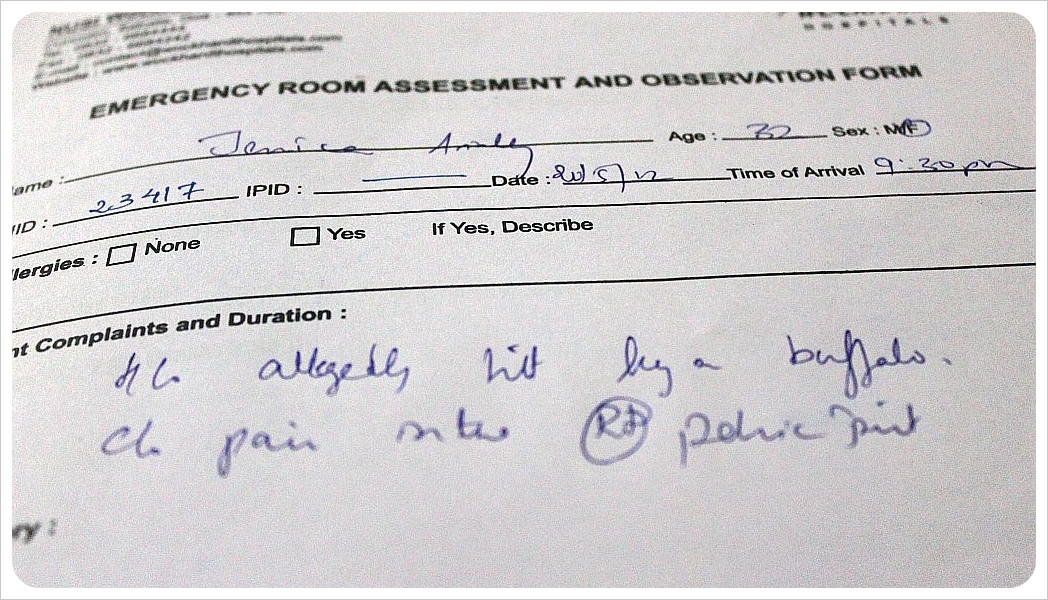 As I recover, I have also completely forgiven this poor little cow, or big buffalo, whatever it was. In fact, I don’t blame him at all. That night, the street we were walking on was busy. For a narrow beach road, there were loads of tuk-tuks, taxis, foreigners on their rented motorcycles and everyone was honking and trying to get where they wanted to go. As we turned off the beach and on to the street, I had seen two cows aggressively sparring, but since I had never heard of anyone ever getting rammed by a cow, I didn’t think too much of it. The cow was agitated, his ‘friend’ was getting overly aggressive, and no matter where he walked, he couldn’t get through the traffic. There I was, walking slower than a senior citizen, taking care of my injured knee and I just wouldn’t get out of the way. And so, he flipped me. He had no interest in hurting me, but he was scared, so he did the most rational thing a cow could do to make room for himself.

What will I take away from this whole experience?

1. You have to make your own room for yourself in this world, and watch out for those behind you kicking you out of their way.

2. Of all places for this to happen, India wasn’t such a bad place. There were three hospitals within a 40 minute drive of each other, with the most expensive costing less than a Domino’s pizza.

3. Indian TV (of which I have watched A LOT in the last few weeks) is really entertaining and offers great insight into Indian culture.

4. I have an amazing girlfriend who is taking such good care of me.

5. Great friends help injuries heal faster (thanks again to Jaime and Val for coming all the way back to Palolem just to hang with me!)

6. I’ll be coming back to India. After all – I still owe Dani that amazing India trip of a lifetime.