Primarily known for its eco-friendly tourism, Costa Rica aims to preserve as many different regions as possible and has over 26 national parks. From mountainous cloud forests to volcanoes, coastline, wetlands and rainforests, the country is bursting with these parks. So when choosing the best, in Costa Rica it isn’t too much to ask for a trifecta – lush, green jungle, wild animals and sandy beaches to lay the afternoon away. Costa Rica has two such national parks: both Manuel Antonio on the Pacific coast and and Cahuita on the Caribbean coast. 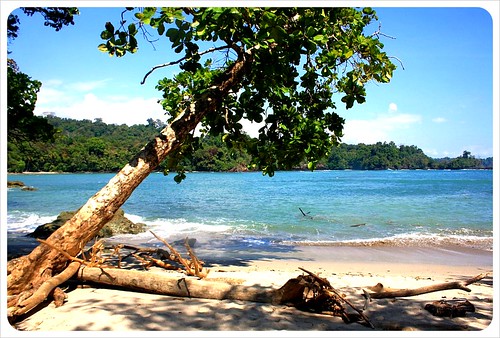 While both can boast jungle, wildlife and beach, these are two very different experiences. Despite a $10 entrance fee, Manuel Antonio is one of Costa Rica’s most popular destinations. Cahuita, on the other hand, costs (next to) nothing to get in, and remains a more off-the-beaten path National Park in comparison. Most travelers don’t have time to hop from coast to coast during a trip to Costa Rica, so read on for a closer look at both to find which might be the right fit for you. 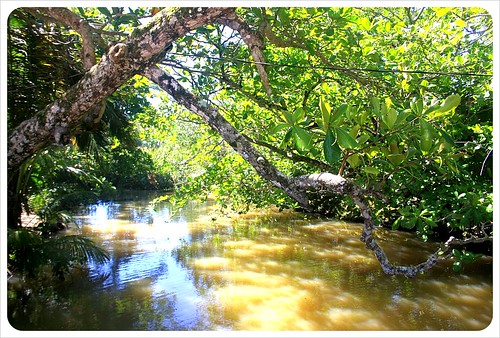 At 4,014 acres (16.24 km2), Manuel Antonio National Park is Costa Rica’s smallest, but certainly most famous national parks in the country. This family-friendly park is located 30 kilometers south of Quepos on the Pacific.

The animals are the main draw at this park and there are plenty of them: four kinds of monkeys, both the three-fingered and the two-fingered sloth, raccoons, pacas, coatis, hundreds of exotic birds, snakes, spiders, iguanas and crabs. 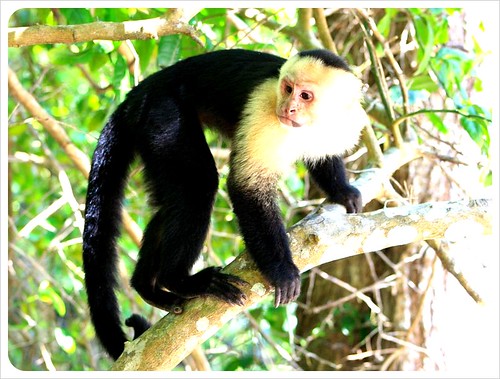 With wildlife sightings at Manuel Antonio essentially guaranteed, tourists come in flocks to spot them. Young, old, agile and those moving very slowly all crowd the main paths early in the day, but sneak off to some of the more secluded hiking trails and  you’ll have the forest to yourself. Head back to the beautiful blue beaches, however, and there is no way to escape the crowds, who line the sand, soaking up the sun like a trip to the beaches of Florida or Spain rather than in a protected wildlife reserve. 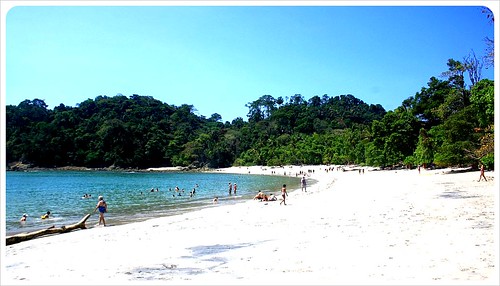 There are of these smaller paths in the park, including one leading high up to the top of a cliff with expansive views out over the ocean and some of the park’s picture perfect beaches. Plan in a few hours to explore the jungle and spot animals as you go. The monkeys, are alarmingly accustomed to the presence of tourists, here, and have no qualms about coming right up to tourists to get their hands on some chips or cookies. Regardless of the number of people around, families of raccoons are known to walk right up to bags and coolers to snatch food, another good reason to head away from the madness and catch the animals in their natural behavior. 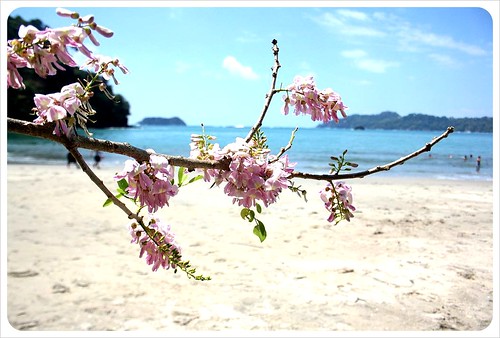 Tip No 1: Rent a guide. While we saw plenty of wildlife, guides who work in the park park know the best spots to see wildlife and carry high-tech binoculars to spot monkeys and sloths hiding high up in the trees. 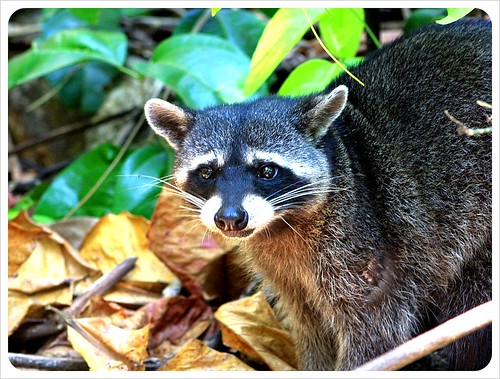 Tip No 2: Visit early in the morning. If you stay directly in Manuel Antonio, you can get up early and be at the park entrance right at 7am to arrive before the tour buses arrive around 9 or 10.

Cahuita is a sleepy beach town on Costa Rica’s Caribbean coast, just half an hour from popular Puerto Viejo. The small village has several budget hotels but is practically undeveloped in comparison to Manuel Antonio. The national park at the end of town, which runs parallel to the beach, is not only known the wealth of wildlife on land, but also for its reef which is perfect for snorkeling and scuba diving. Cahuita National Park is also perfect to pop into for a day out on the nearly empty beaches, surfing and sunning. Entry is technically free, but donations are welcome. 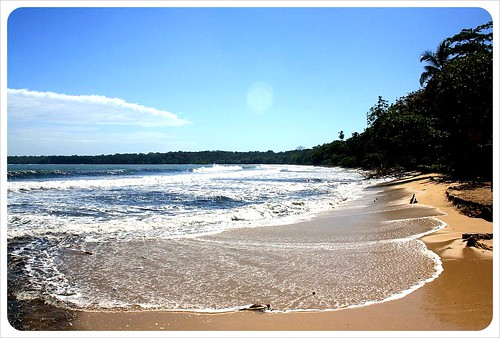 Enjoy the sounds of the jungle during a walk along the two-mile tourist-free path on the beach. The animals here live in a much more undisturbed environment, which makes them much more shy and harder to spot, so keep an eye or two out for the rich variety of wildlife: howler monkeys, Capuchin monkeys, sloths, toucans, pacas, coatis, raccoons, snakes, various kinds of colorful crabs and hundreds of different kinds of fish and coral for divers. Hire a guide for optimal animal spotting. 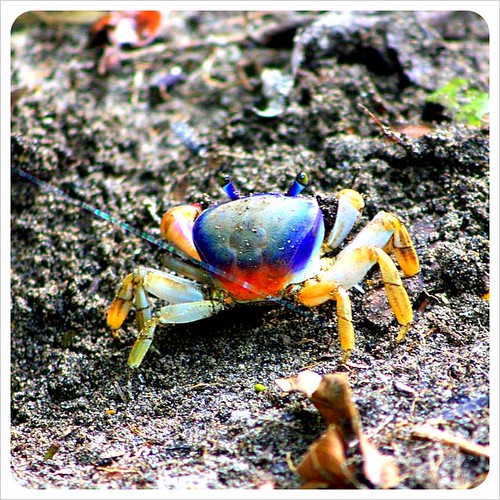 Because the National Park and the town are less developed than Manuel Antonio, exploring is less organized. The start of the park is an easy walk on a wide sandy path, but you will shortly come to a river crossing, which either requires a silly 20 second boat ride across the river, or wading through chest-high water to get to the other side. Get across that, and you will feel like you have the place to yourself. 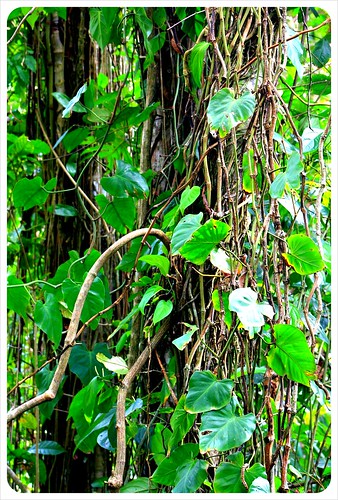 How to get there: From San Jose’s Gran Terminal del Caribe (Calle Central, 1 block north of Avenida 11) there are five buses daily. The ride takes about 4 hours; US$6.50.

Tip: Don’t pay for the boat to cross the river. If you walk on the beach where the river hits the ocean, the river is narrow and shallow enough to be crossed on foot. Just make sure to carry your camera & valuables high up. 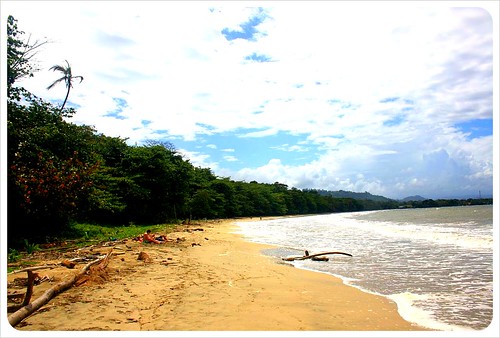 There is no clear winner here as both parks are definitely worth a visit. Manuel Antonio has much prettier beaches and more visible wildlife, whereas Cahuita offers more tranquility and allows you to take your time without other tourists. Manuel Antonio feels like a resort and is as much about a day at the beach as about a national park, while Cahuita is heavy on the park, with a beach on the side. 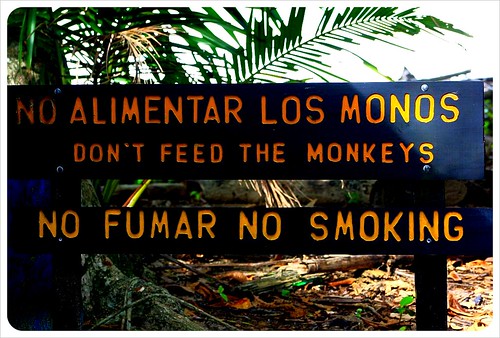