I started the month in Germany, where I hugged my family goodbye and hopped on a plane to New York. The rest of the month was spent between Manhattan and Brooklyn, and a few days upstate – first for my fall foliage road trip and then again for Thanksgiving. 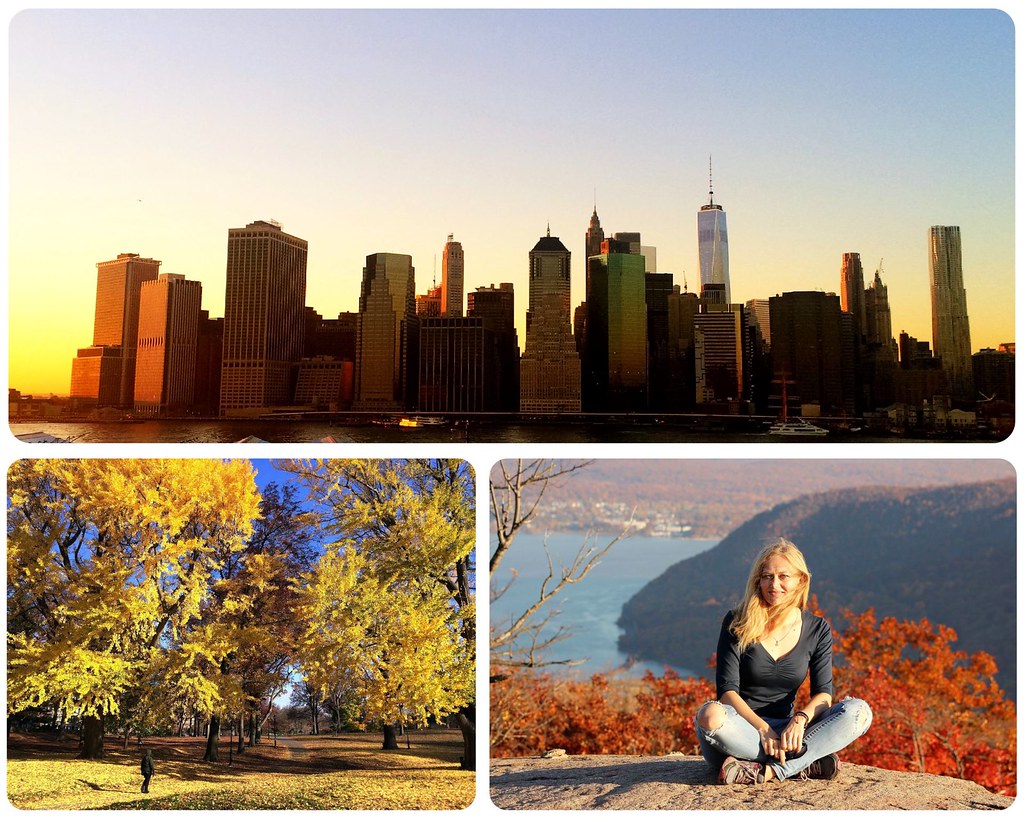 Returning to New York truly felt like coming home – and as I was typing these words I thought to myself ‘Haven’t I said that before?’, and a quick glance through my June round-up revealed that I had indeed said that before – when I came back to New York in June. So, it seems like I’ve finally found a place that I can call home.. well, it is definitely the place I feel the most at home, and know better than any other place in the world. You have no idea how good it feels to finally have a place to (sort of) come home to, after so many years on the road. One reason why I came here was because I wanted to spend my birthday with people I loved, and I couldn’t be happier with the choice I’ve made to cancel my Nepal trip (for now!) – I wouldn’t want to be anywhere else in the world right now. 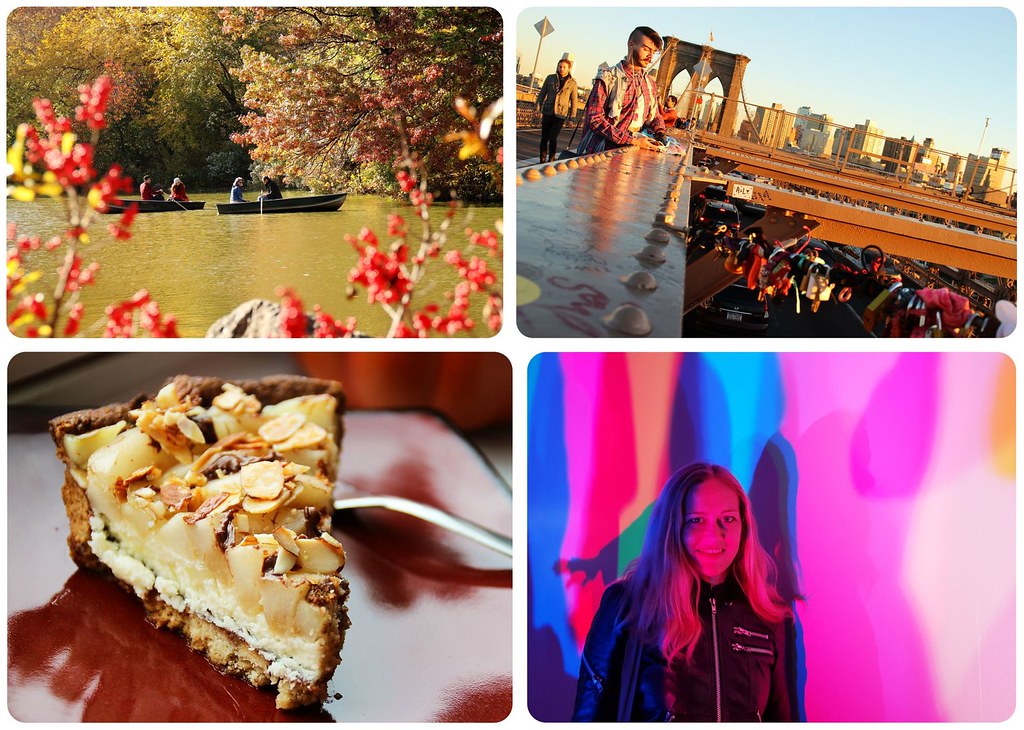 Of course I couldn’t sit still this month – and the glorious weather, a for New York untypically warm November, helped greatly in getting me away from my desk. I explored a few places I hadn’t been to yet, like the gorgeous Coney Island Creek Beach, went to the Museum Of Feelings, saw The Book Of Mormon on Broadway, saw an awesome hip hop concert (more on that below), ate sooooo well (lots of cake! Including home-made cake… I was baking up a storm in Germany and it seems like I can’t stop.. Next up are Christmas cookies!), went to see some new street art in Harlem and spent time in one of my favorite neighborhoods, Williamsburg. I finally visited the Whitney Museum, which I’d never gotten around to during the summer, I spent a lot of time in Central Park photographing the fall colors, and I loved that thanks to the lack of rain I was able to go running nearly every day. And then there was the amazing fall foliage road trip, of course, but more on that below. 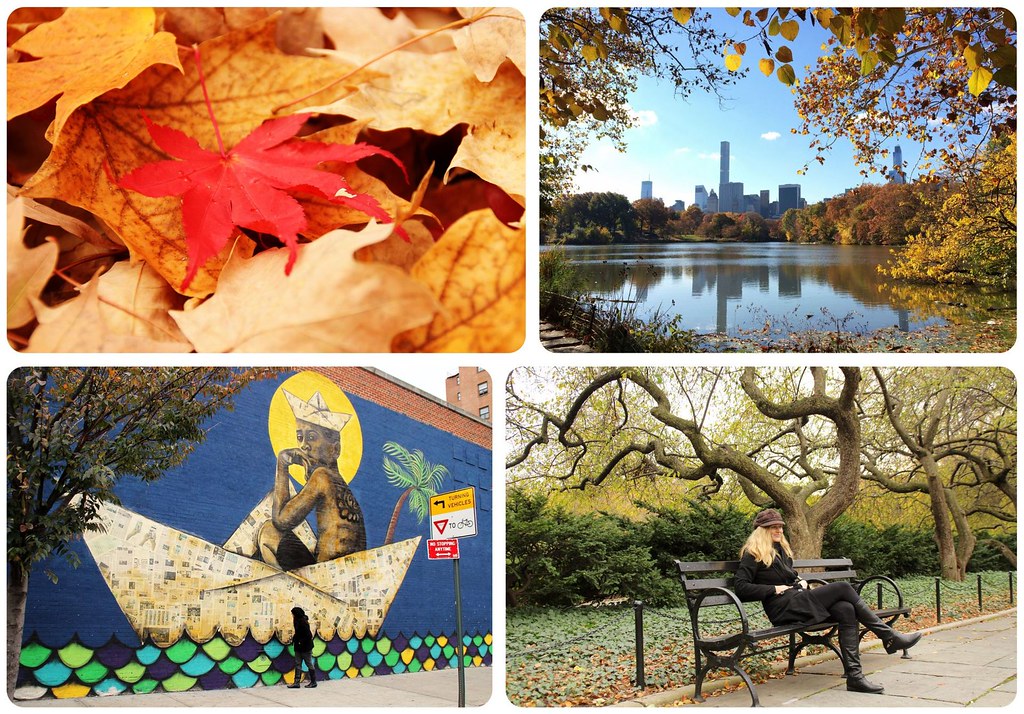 I had planned this Upstate New York fall getaway for weeks, and I was blessed with beautiful weather during my road trip to the Catskills. I am officially in love with autumn! My road trip couldn’t have gone better – I hiked up to the top of a mountain, I walked across the Hudson River, hiked to a waterfall, had fabulous food, saw beautiful sunrises and sunsets, and took hundreds of photos of the colorful fall leaves. 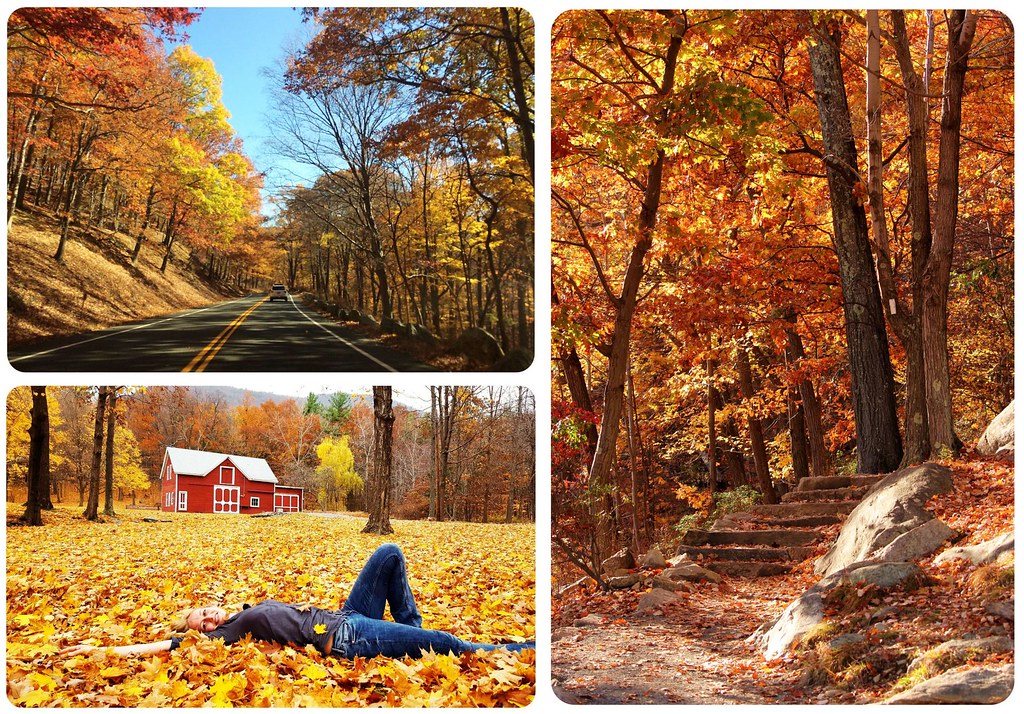 Shortly after arriving in New York, I attended a Travel Massive, which is a meet-up where travel addicts and travel industry get together to mingle and connect with like-minded people (they’re held in several cities around the world- check out here if your city has one and if so, sign up for it.. It’s free!), usually sponsored by a travel company. And this is how I ended up with two return tickets from New York to Singapore on Singapore Airlines – the sponsor of the NYC Travel Massive in November, who gave away this amazing price. It was an early birthday present for sure.

On my flight to New York, the pilot made an announcement mid-flight: ‘If you’re sitting on the right side of the plane, look outside. We are having excellent visibility and can see the northern lights.‘ I was lucky here too, having a window seat on the right side of the plane, and marveled at the dancing green lights outside in the night sky. After seeing them from the ground in Iceland in September, this was my second time seeing them, and I can’t describe how special it feels to watch this phenomenon.

I am typing this in my 38th floor luxurious apartment overlooking Midtown Manhattan, where I am bird sitting (this is a first!) until I move to Brooklyn, where I scored another housesit following this one. Both housesits came through TrustedHousesitters – while I’m always bitching about the pricey membership of that website, it surely does pay off, though. (If you’re interested in housesitting in New York, I am sharing some tips in this article: Adventures in Housesitting in New York City, and you’ll get 20% off a TrustedHousesitters membership if you sign up through my referral link here).

I also had to turn down THREE amazing housesits over the Holidays here in New York because I’d already committed to a housesit for a former client. If you want a housesit in NYC over Christmas and New Years, let me know 😉

I’ve spent so much time in the U.S. over the past few years, but somehow I never happened to be around for Thanksgiving.. Until now! I was lucky enough to be invited for a traditional family Thanksgiving, including a giant turkey, and while this picky vegetarian couldn’t join the turkey eating fun, I actually got my own ice cream cake turkey in honor of my birthday – absolutely amazing! (And I knew that I was in the right place when my friend leaned over and whispered in my ear: ‘You know this day is all about feeling.. Incredibly stuffed.. Right?’. A Holiday dedicated to stuffing my face?! I’m in!)

I’m not much of a birthday person (the first time I got an actual birthday cake was last year!) but this year I celebrated all week long, it seemed. I started my birthday week with an awesome hip hop show in a tiny club in New York (Angel Haze, for those who are interested.. She’s amazing!), followed by seeing The Book Of Mormon on Broadway. I’d tried the ticket lottery two times and third time’s a charm was definitely true here when I won two VIP box tickets. If you’re not familiar with the Broadway ticket lottery: several shows hold a ticket lottery every day during which you can win tickets to the show for a fraction of the normal prize. (Here is a list of plays and the times of each of their lotteries). I paid $32 for a VIP box ticket that normally goes for $189!! This is even better than the TKTS discount tickets booths in Times Square but of course you’re not guaranteed to win if you decide to try the lottery. I also treated myself to a visit to the Museum Of Feelings, taking half a day off work on a sunny day, and it was such a good reminder of how much I love the flexibility my lifestyle gives me. Yes, I might have worked all day on my birthday on a big project I needed to finish, but I was able to take half a day off when I thought it was too nice out to waste the afternoon in front of my laptop. 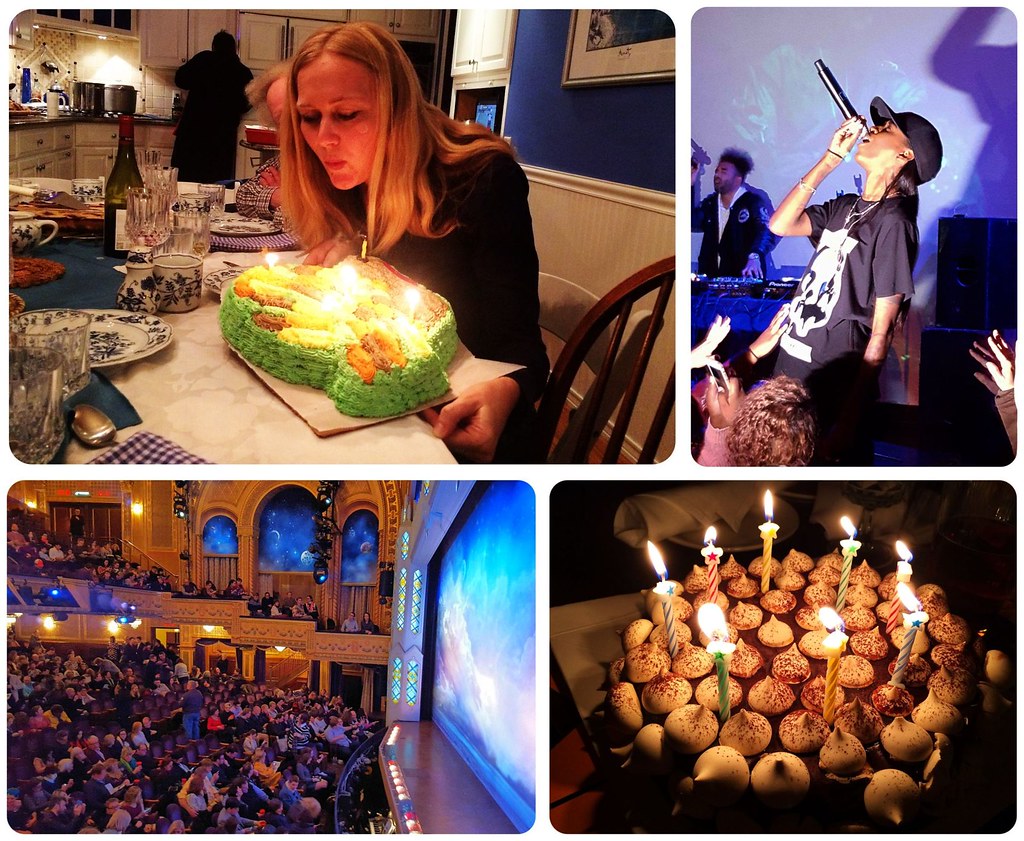 Breaking down with the car on a highway

I broke down with the car on the highway … in Germany. On my last day in Germany, I was going from Berlin to Leipzig to see my brother and my nieces, and the car broke down on the highway. If you know German autobahns, you know how fast cars are going there, which means I was terrified waiting for time tow truck on the side of the road while cars and lorries were whizzing by me at over 100 miles per hour. It didn’t help that my cell phone was running out of battery in that very moment… to make a long story short: I was towed eventually, and luckily I wasn’t alone in the car while waiting in the dark to be ‘rescued’. In the grand scheme of things, this was a minor nuisance, however, and once I got to New York, things went extremely well – I can’t believe there wasn’t a single incident since I got to the States.

Even though I had such a fun-filled month, I also worked my b*tt off. I’ve still got a ton of content from my latest trips to share with you, and I’ve got to see a first preview of the video footage shot in Tel Aviv last month (I don’t hate myself on camera!). I also wrote several travel guides and am happy to stay put for a while to be able to edit video footage, and to sift through the thousands of photos I’ve taken this year that I still want to share them with you. 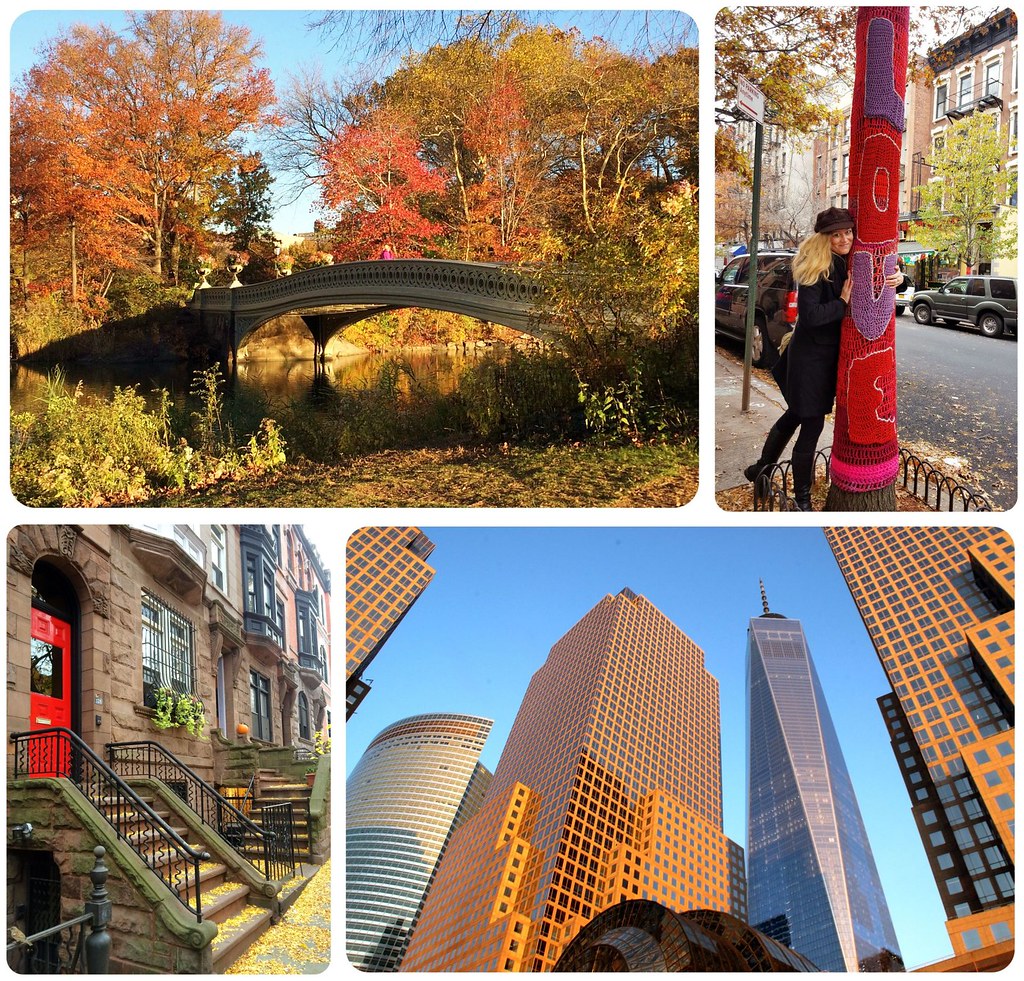 I have another month in New York before I get ready for my departure to warmer regions, and I am planning to fully indulge in holiday cheesiness. Ice skating, marveling at the Christmas window displays on Fifth Avenue, checking out the Christmas markets, making Christmas cookies, cooking a big Christmas dinner, and ringing in the New Year with friends. I don’t know what it is about New York but this seems to be the only place where I don’t ever itch to travel somewhere else. This might change as soon as temperatures drop to uncomfortably chilly levels, so we’ll see how I feel a month from now about leaving New York. 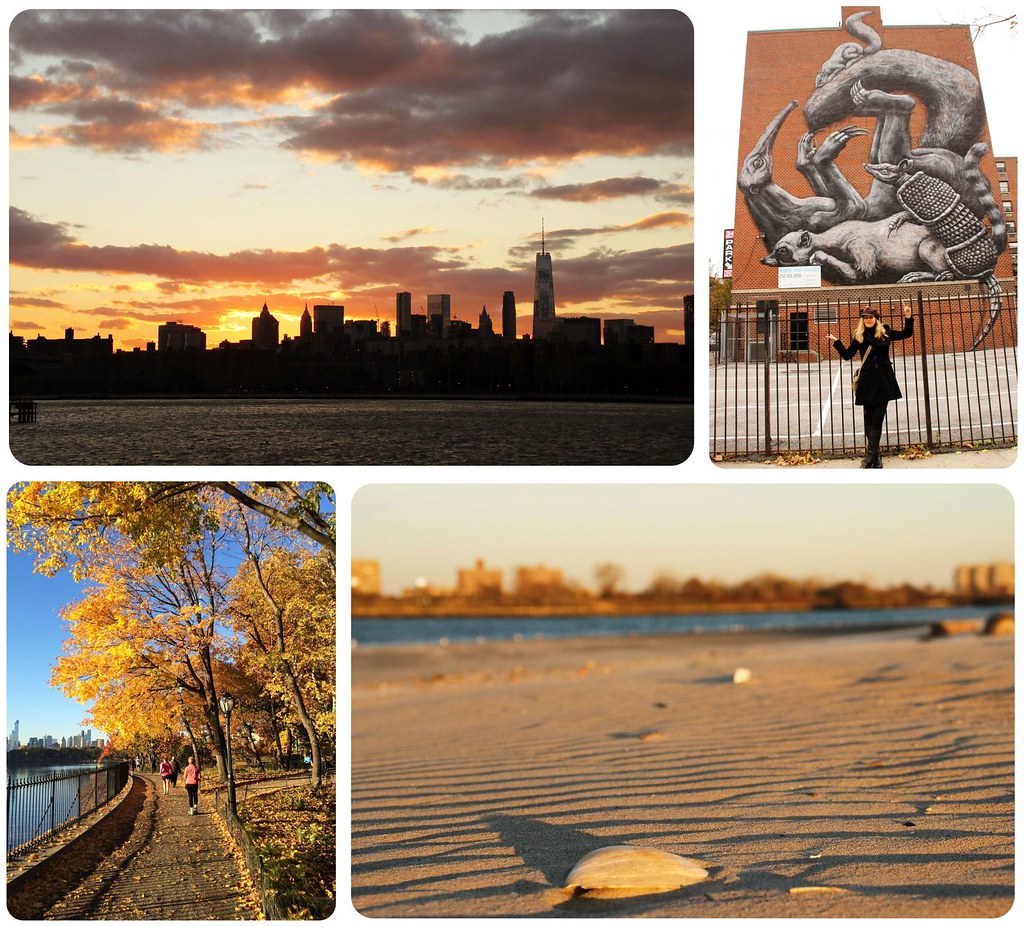 Where to stay in Berlin: The Park Inn Berlin Alexanderplatz