Arizona Polaroid of the Week Tucson by Dani on August 29, 2013 2 comments Polaroid wildlife 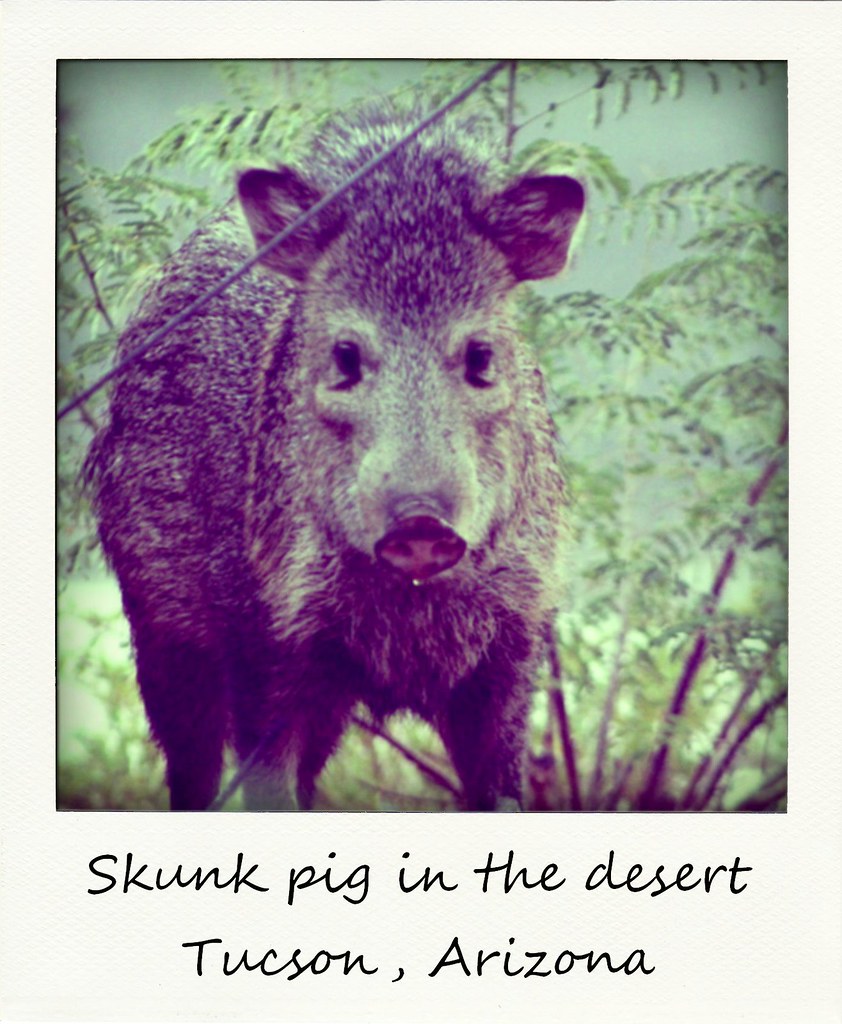 We are now in Tucson for the third time now after falling in love the desertscape of Southern Arizona during our first time housesitting here in 2010. We returned in 2011 and now again in 2013. We keep coming back for the sweet, adorable Miss Millie dog, the beautiful house and spending time in the pool.

This time around, on one of our first days here, Miss Millie started to bark loudly, which she almost never does. So I went to the front door to see what had gotten her so riled up and found myself looking out the window at an unusual-looking, pig-like creature staring right back at me. Rather than being aggressive, she sauntered over to check out a cactus in the front yard, leaving me to feel safe enough to grab my camera and get outside to take pictures of her.

When I opened the door, I started a much larger pig who was rummaging around in the bushes. She sprinted across the street, but I had plenty of time to see just how big she was! Luckily, the ‘little’ one didn’t seem to mind me and let me snap away while it was eating the cactus fruit that had fallen down from the bushes.

Not a pretty beast, these animals are called javelinas, also known as skunk pigs. They are members of the pig family and can weigh in at nearly 90 pounds, and they live here in the southwestern United States, but occur all the way down into South America. We had seen them in the Desert Museum when we went there three years ago, but we had yet to see them roaming our neighborhood in Tucson! All excited, we told the neighbors – but the locals were not exactly impressed. They are used to all the incredible creatures found down here – between the tarantulas, scorpions, rattle snakes, gila monsters and more.

But we find these skunk pigs fascinating! They are usually found in bands of eight to 15 animals of various ages – but I have to admit though that we were happy to have met only two of them. Let’s hope we won’t meet any more during the canyon hikes we have planned!

The Top 10 Hen Do Destinations In Europe