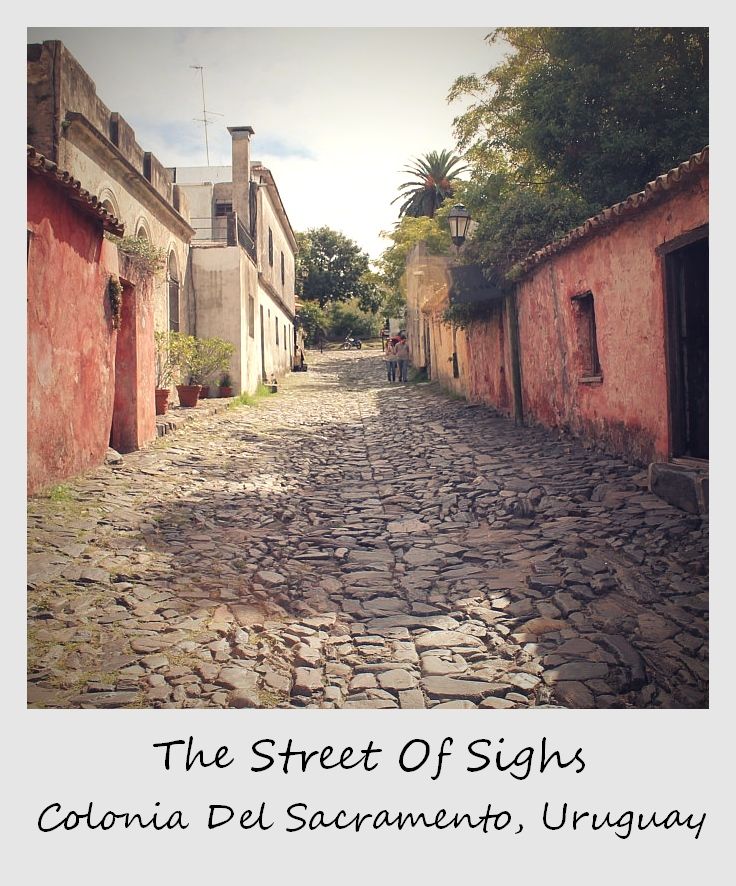 Leave it to us to be contrarians. While most people start their Uruguayan adventures in Colonia Del Sacramento, we saved this little gem for last.

Just a quick 1-hour ferry ride across the Rio de la Plata from Buenos Aires, Colonia is often a short trip, sometimes even a day trip, from Argentina, but it couldn’t be more different to the rest of sleepy, spread out beach and river towns of Uruguay. he little colonial town was our last stop before returning to Argentina. The Portuguese first settled here in 1680 and while the city has expanded considerably since then, parts of the old town look as though nothing has changed since back then. Old wooden horse carts parked out front of rickety colonial houses with faded facades lining centuries-old cobble stones transported us back in time.

This week we feature the most famous of these historic heritage streets in Colonia: La Calle de los Suspiros, or ‘the street of sighs’. There are many legends about how it got its name. One legend has it that this street was lined with brothels in the 17th century, and the sighs came from sailors arriving in port sighing and fainting at the sight of pretty girls offering their services.  Another more romantic (and tragic) tale talks of a young girl who was waiting for her lover and suddenly stabbed, her farewell sigh heard throughout Colonia. An even darker version of the name’s origin comes from prisoners condemned to death being led along this street to be drowned in the river.

Sounds like there was quite a lot of trouble on this street centuries ago, but today it’s a simple cobblestone street perfectly preserving a bit of architectural history in time and the ‘sighs’ come from the tourists gasping either at its beauty or at how difficult it is to walk on the jumbled old cobblestone road!