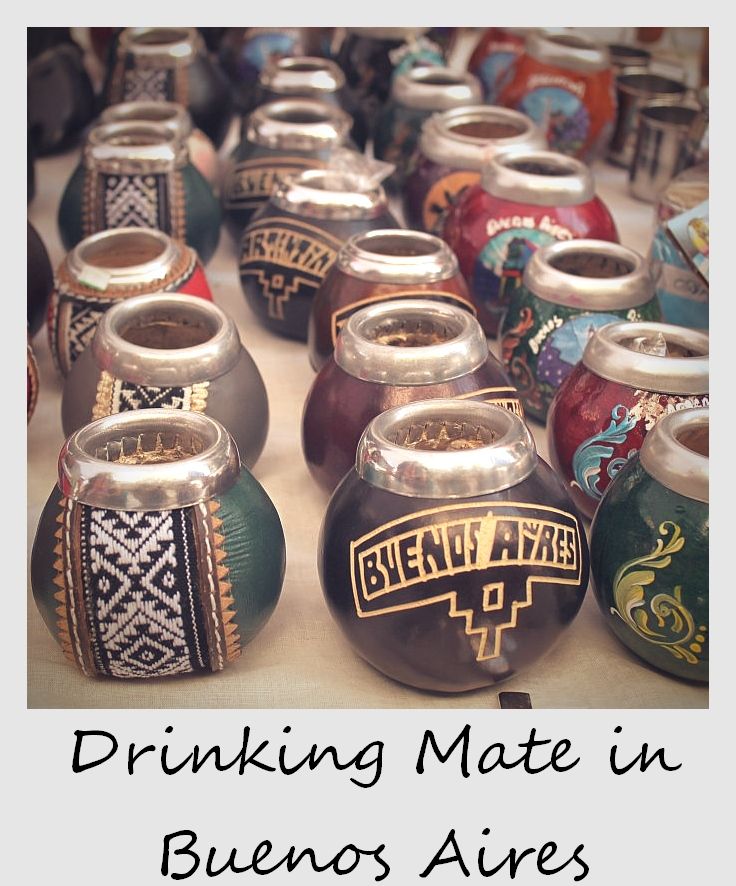 We arrived in Buenos Aires last Friday, and one of the things we knew is that they drink Yerba Mate, an herbal, caffeinated drink that is hugely popular throughout the southern countries of South America.

What we didn’t know is that they drink mate EVERYwhere, carrying it with them in their cuia or mate, the hollowed-out gourd you drink it out of.  For those of us who end up carrying a venti Starbucks coffee around all day, it is easy to understand the attachment, but imagine being so dedicated to mate that you carry a small gourd in one hand and a giant Thermos filled with water in the other.

Mate is a lot more social than coffee, however. There is a very specific way to drink it. First you fill about half of the jar with the mate leaves, then you add hot (not boiling) water and sip it out of a silver straw. Water is added over and over again from the thermos, until the flavor runs out. Mate is usually drunk in a social environment, with family and friends, who all share one gourd, that is handed from one person to the next. You see groups of young people and couples sitting in parks sharing mate, shop owners and market vendors sipping their Mate while waiting for customers. Mate gourds are sold everywhere and range from the original ones made out of pumpkin to fancy colored glass, china, silver and wooden containers.

We quickly realized that we needed to buy our own mate gourd if we wanted to be accepted as Porteñas (locals in Buenos Aires), so we picked one up at the big antiques market in San Telmo on Sunday. We chose a traditional pumpkin gourd and steeped water and mate in it for three days, as we were told by a local friend on our first day in town. Now we are  ready to join in the mate fun in the many parks in Buenos Aires!

What I Wonder When I Wander: Is anywhere new anymore?