The first time I heard about Brighton, the popular seaside town on England’s south coast, was in a Sherlock Holmes crime novel I read as a young adult, which was set in 19th century Brighton. The book did not only talk about a murder case Holmes solved, but it also mentioned posh women in fancy, flowing dressed who were meandering up and down the extensive promenade, hands in white gloves that were holding an ornate umbrella, it vividly described elegant Regency-style buildings with stuccoed facades and column-framed entrance doors. When I finally visited Brighton, many years later, that was the image I had in my head. 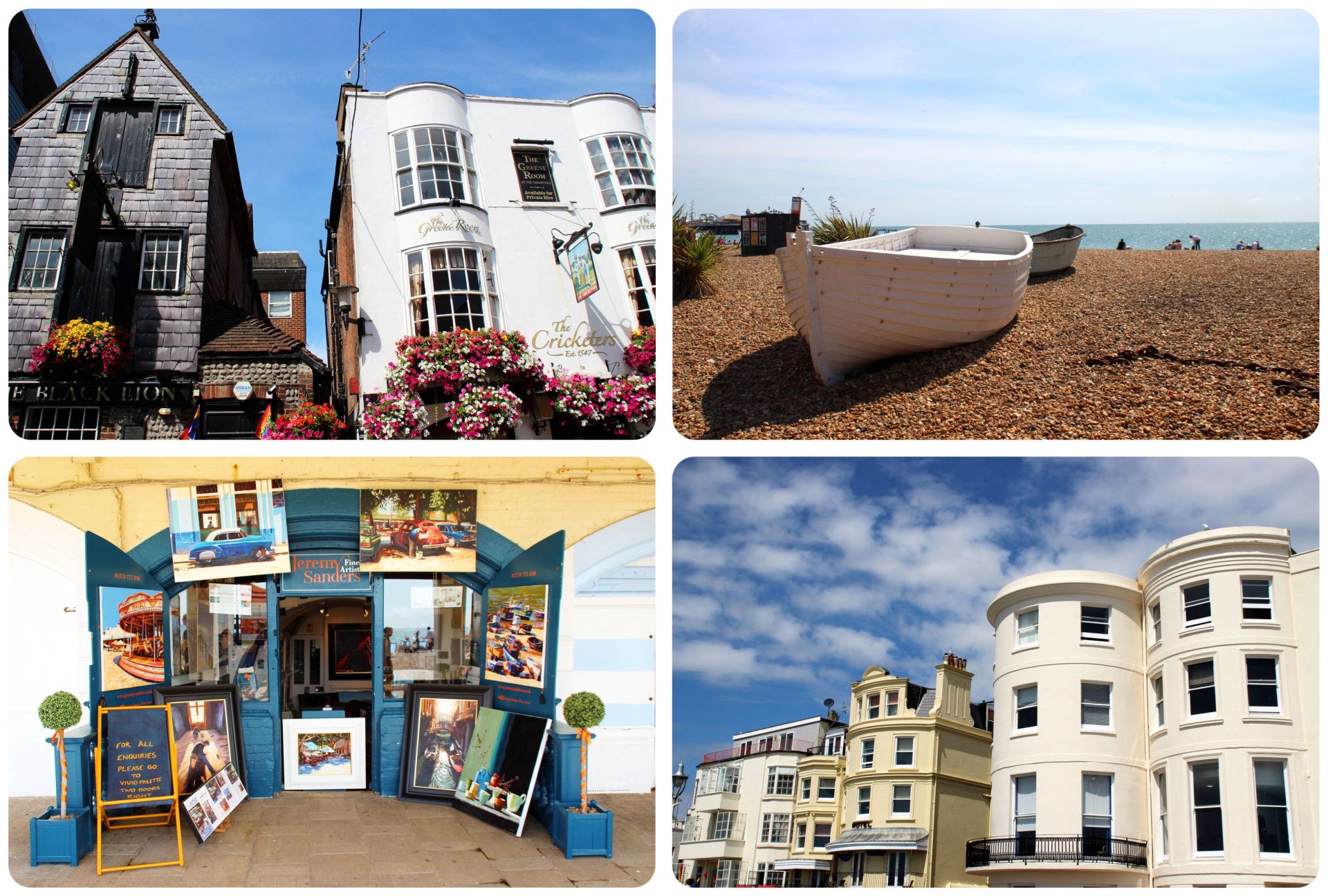 As soon as we arrived at the beach promenade, I could immediately picture Brighton in its heyday as posh weekend getaway for London’s elite and royals. It still had the flair of this elegant seaside town with gorgeous, well-maintained Georgian-style houses facing the ocean, the stunning Royal Pavilion, and the old fashioned pier.

However, once you start exploring Brighton beyond the promenade you realize that the town is anything but stuck in time, having developed into its very own modern version of an English seaside resort, a town that is completely different than all the other seaside resorts on England’s south coast, with its very distinctive, incomparable character that sets it apart from cities like Portsmouth and Southampton. So what makes Brighton so unique? 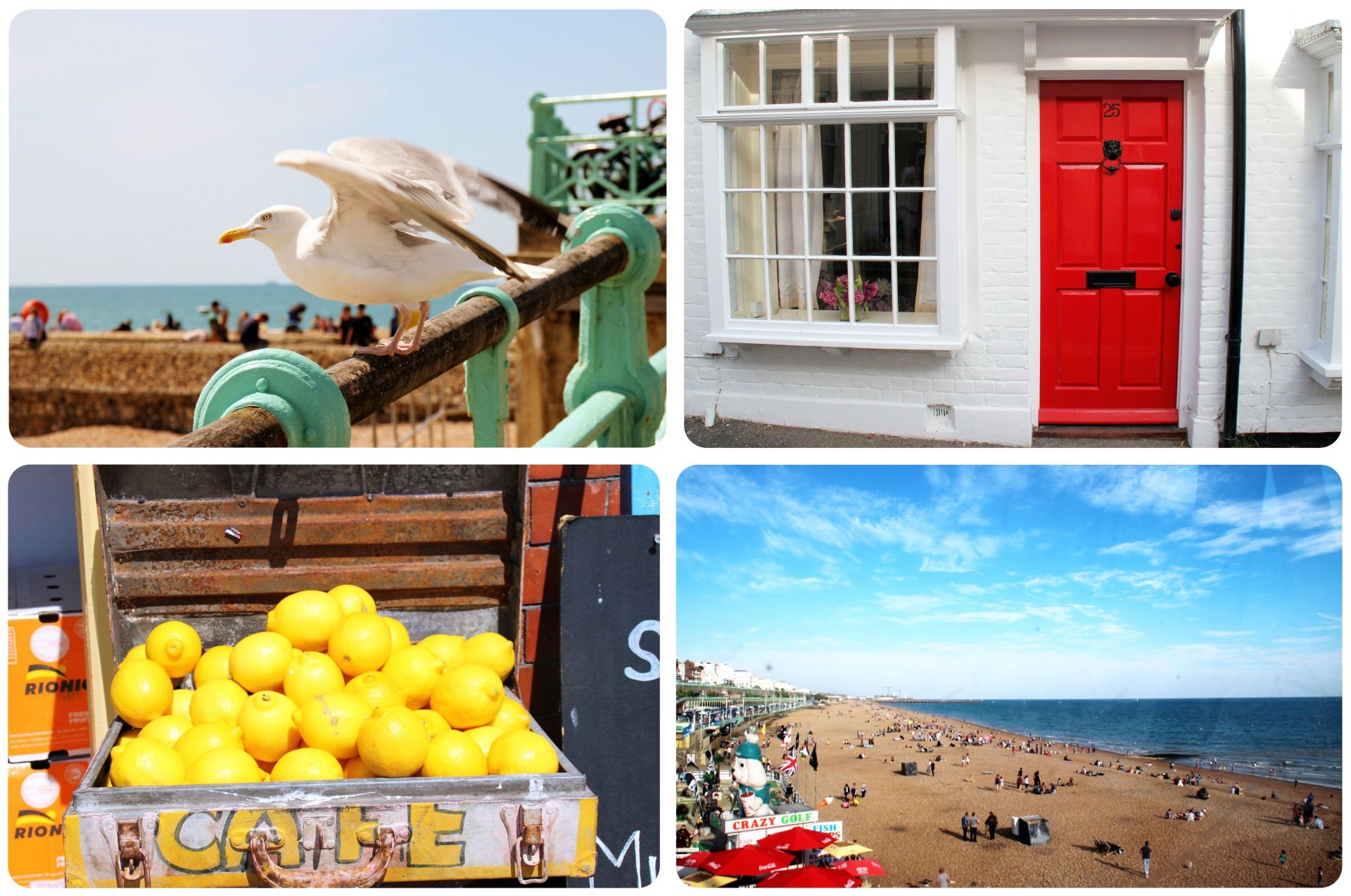 A big reason that Brighton is so different from other seaside town are its people. Brighton is known to be a town that attracts people with alternative lifestyle: Vegetarians, gay and lesbians, artists, hippies, you name it.. You’ll find them in Brighton. Creative minds? Artsy, liberal and open-minded? That’s what Brightonians are. The eclectic mix of interesting people and alternative lifestyles gives the town a distinct character. Brighton is also known for an overall less money-driven and laid-back lifestyle (synonym!) than nearby London, for example. The vibe here is relaxed, stress-free and there is an ever-present feel of vacation in the air. 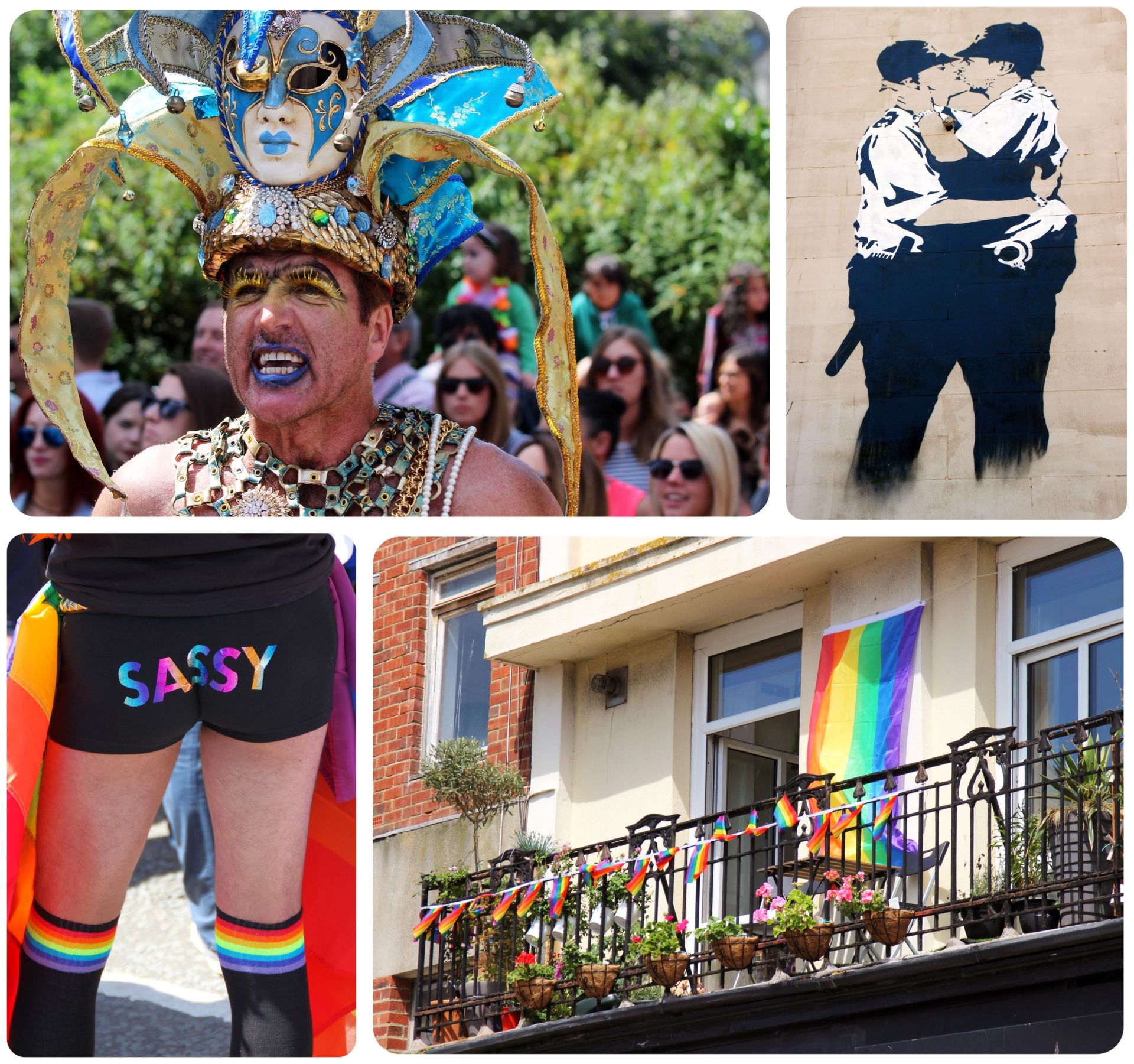 This undoubtedly comes with the aforementioned alternative lifestyles – with those, you automatically get a more interesting city than your standard picket fence prefab home community. Brighton comes in bright colors, with street art, giant murals and coffee shops and restaurants that aren’t your regular chain (even though I can’t deny that all of Britain’s typical high-street chains are also present in Brighton). Which other town in England has a vegetarian shoe store and a vegetarian pub, vegetarian Sunday roast inclusive? 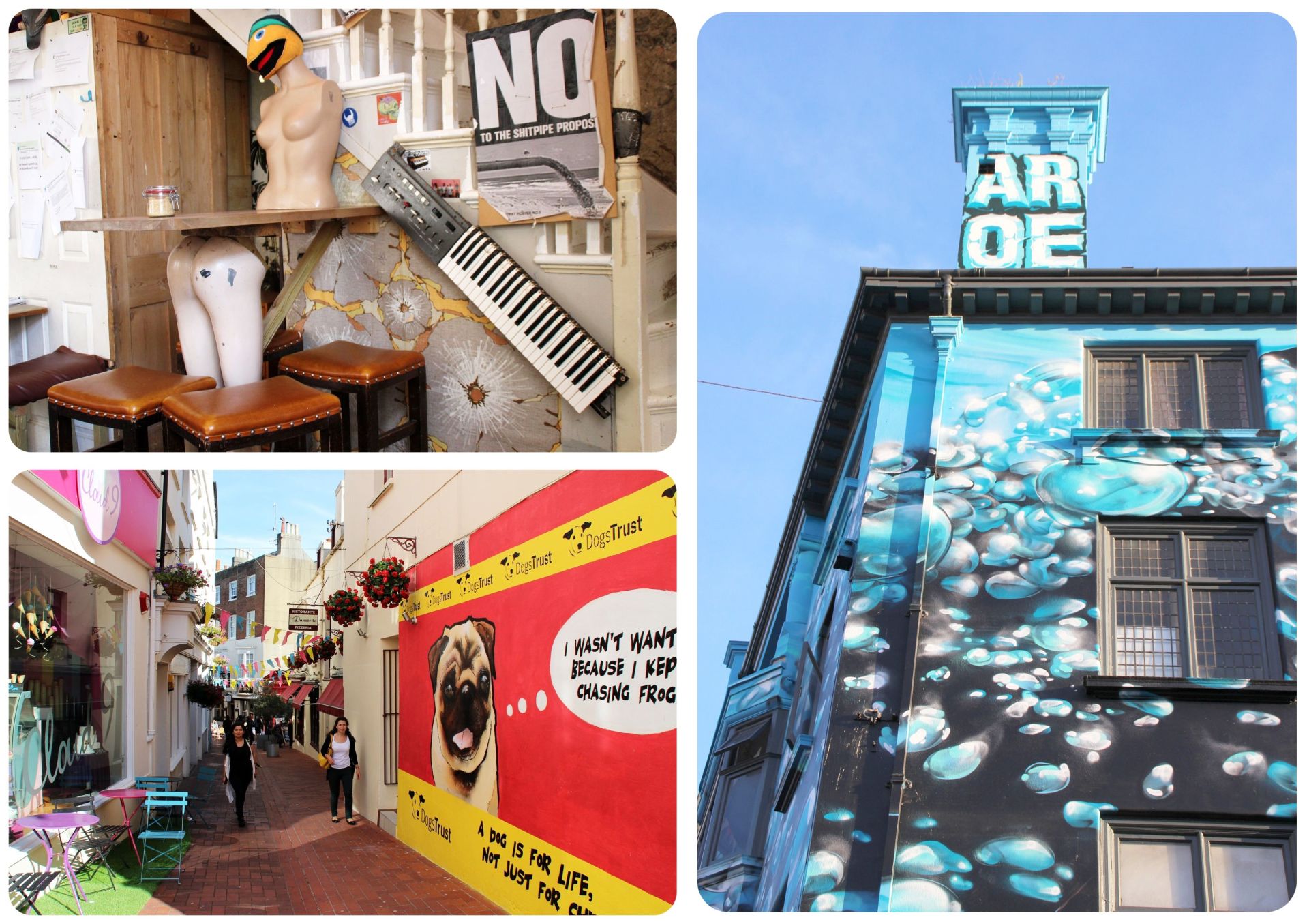 Treasures in the Lanes and North Laine

Brighton has two kinds of lanes that are not to be confused: The Lanes, a maze of little alleys, which are quite unique. These are located close to the beach, just west of the pier. Turn into any of the little streets that lead away from the beach and you’re already in the Lanes, which are lined with little shops, cafes, pubs and restaurants, inviting to stroll, window shop or stop somewhere for a coffee. Or a pint, of course. No matter which Lane you turn into – here, it is all about individuality instead of following the mainstream. Just step inside The Marwood coffee shop and have a look around and you’ll know what I mean (you should stop there anyway for their self-proclaimed ‘kick-arse coffee and life-changing cake’). 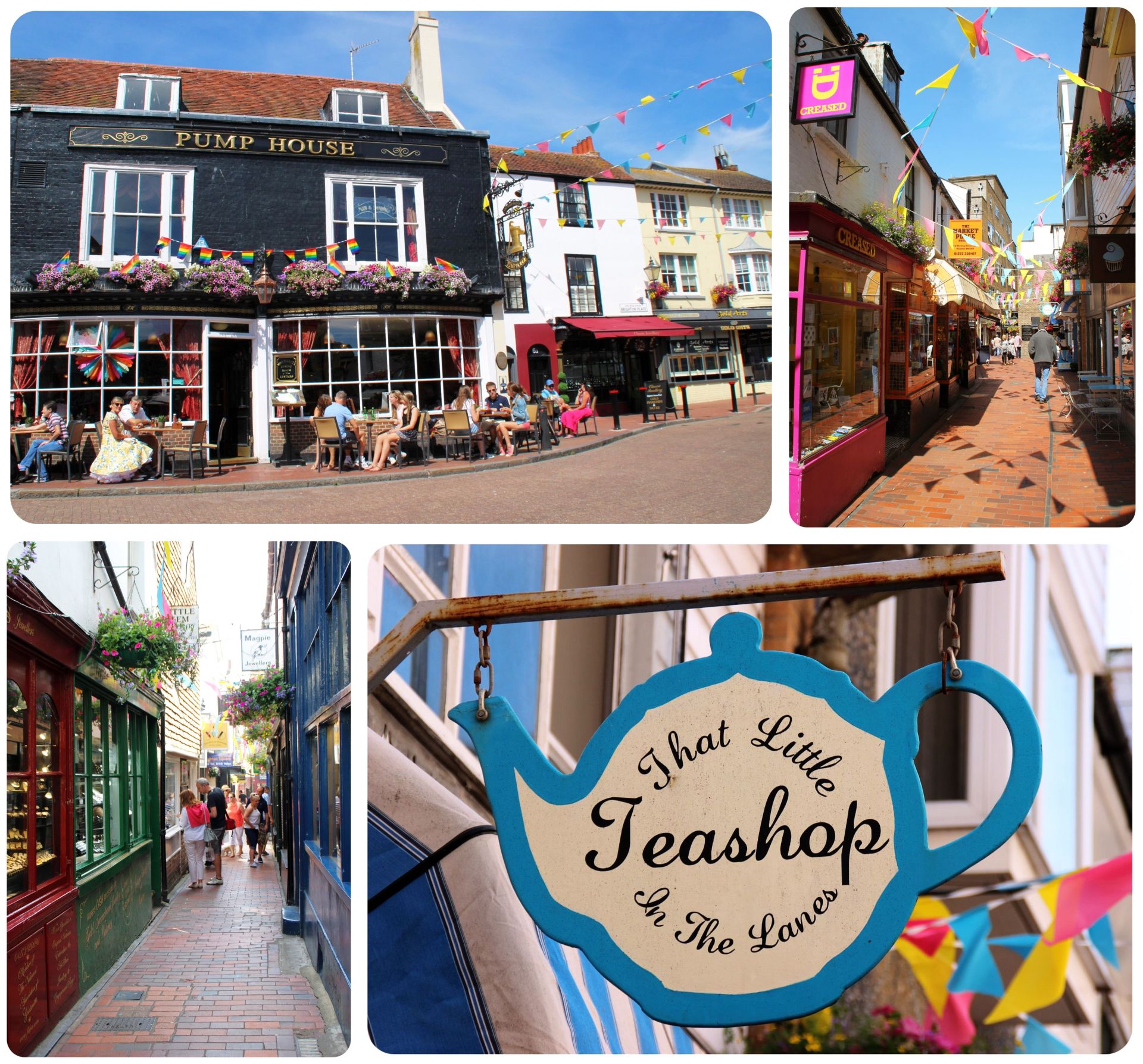 And then there is North Laine, another paradise for treasure hunters, filled with jewelry shops, antique stores and anything in between. Vintage clothes, records, unusual souvenirs, delicious food and vegetarian shoes? You’ll find it all here. This is also where you find Komedia, a fantastic entertainment venue where you can catch a comedy, cabaret or music show while enjoying great food.

Of course the beach plays a big part in what makes Brighton so irresistible. Miles and miles of beach just a short walk from the town center – not many cities are blessed with such a prime location. And even though Brighton’s beaches don’t have sand, but pebble stones, it repeatedly makes its way into lists of world famous beach towns. One thing that gets me wrapped up in nostalgia every time I walk down the beach are things like the quaint, wooden beach chairs, the little oyster shacks and charming gift shops that are housed in what used to be homes for fishing boats. 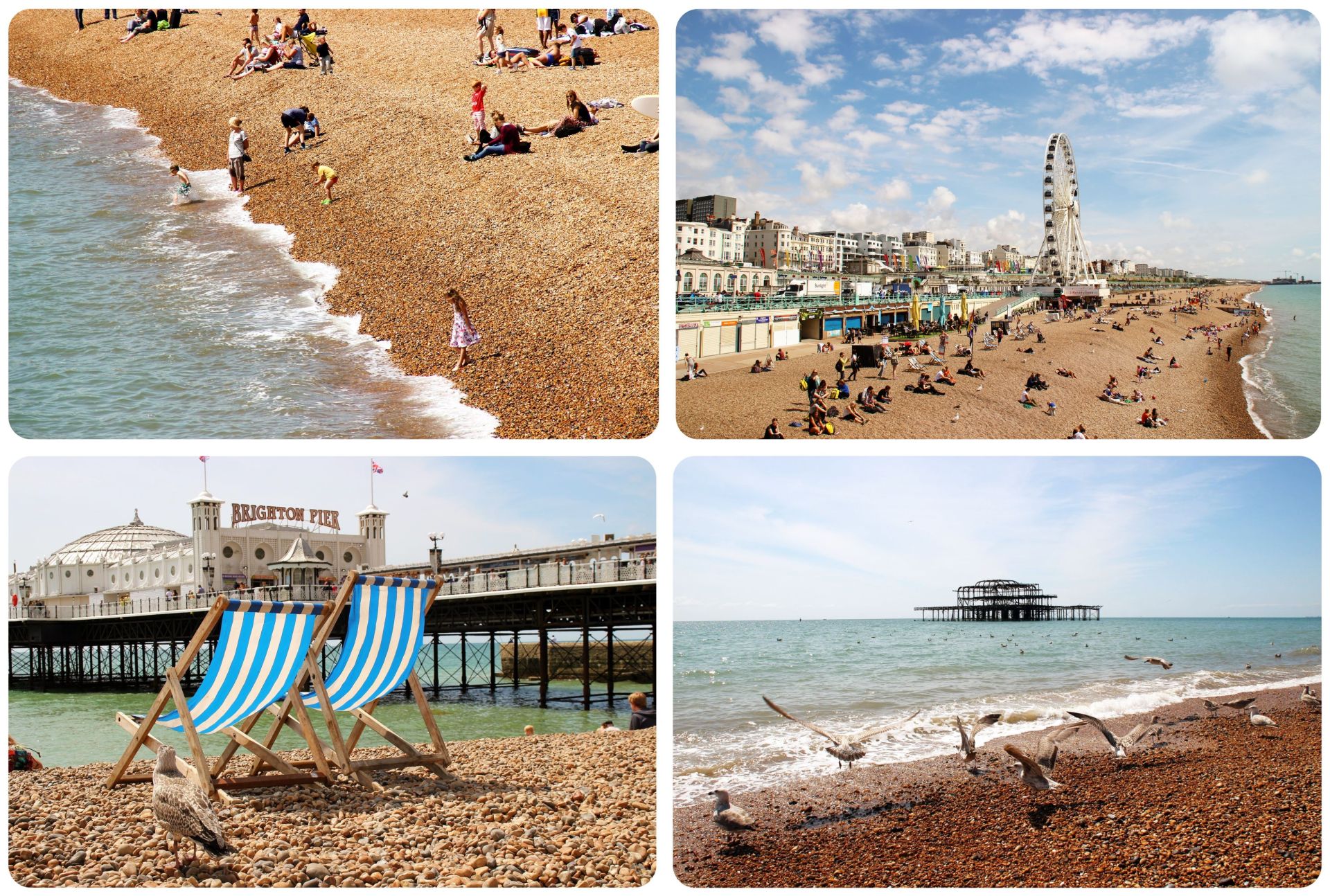 Those of you who’ve been following me for a while know how much I love street art, and Brighton just so happens to be a paradise for street art lovers. You don’t even have to look for it – just walk down the streets and you’ll notice colorfully painted walls in narrow alleys, stencil art on walls, and entire buildings covered in stunning murals. But it’s not only street art that makes Brighton colorful – people here are not afraid to paint their houses purple, blue or pink, instead of the same-same white houses you have in most cities. 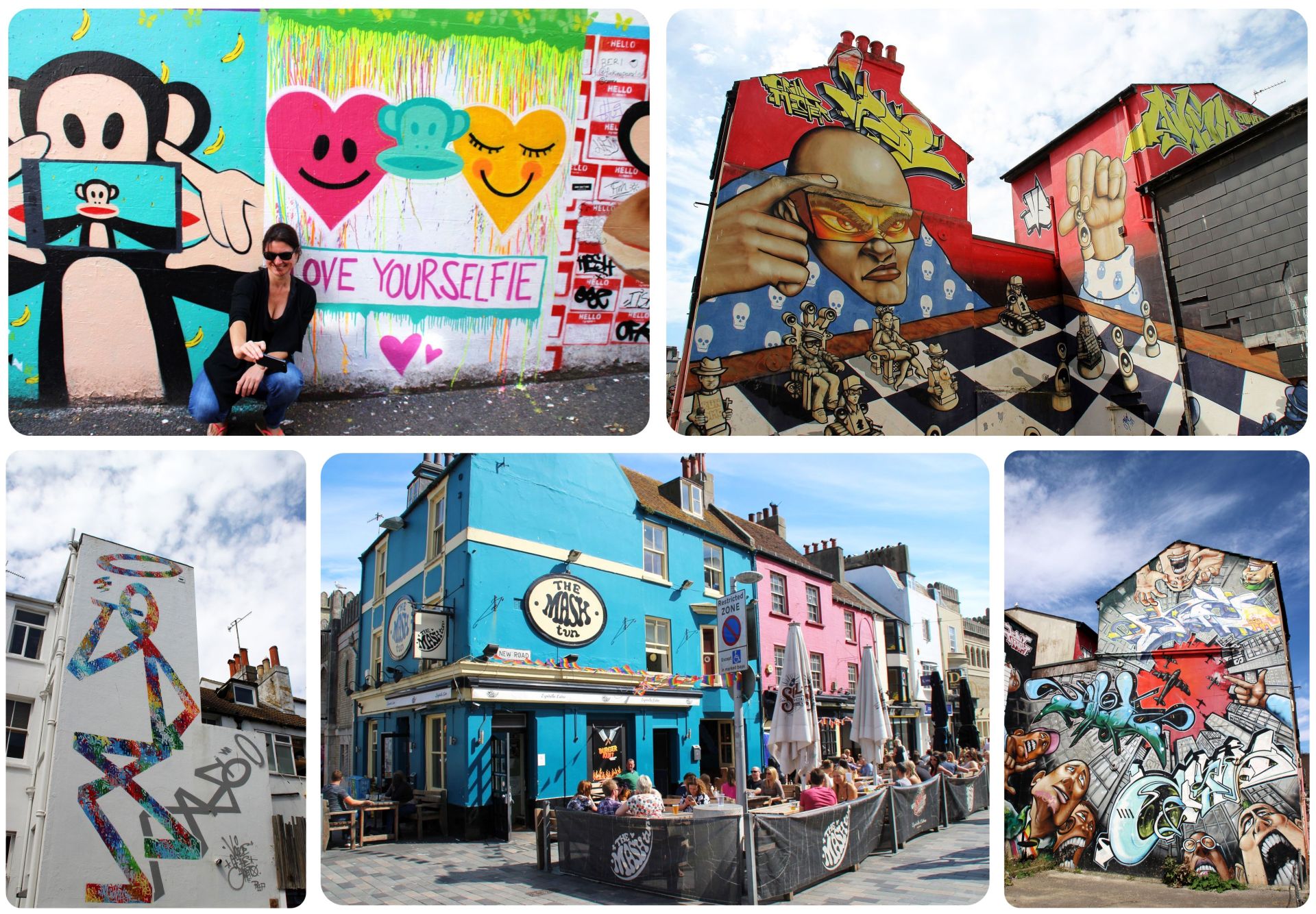 A historical gem: The Royal Pavilion

The Royal Pavilion is undoubtedly Brighton’s best known landmark, built by Prince Regent (he was later crowned King George IV) in the early 19th century. The impressive building does not look British at all, and doesn’t even fit into Brighton, but that makes it stand out even more. You can’t miss the giant domes and minarets, and upon getting closer, the ornate columns and well-maintained gardens that surround the Pavilion. If you are a history buff, you don’t want to miss the inside which is still filled with the Regency-era furniture and Chinese decorations like an extravagant dragon chandelier in the dining room. 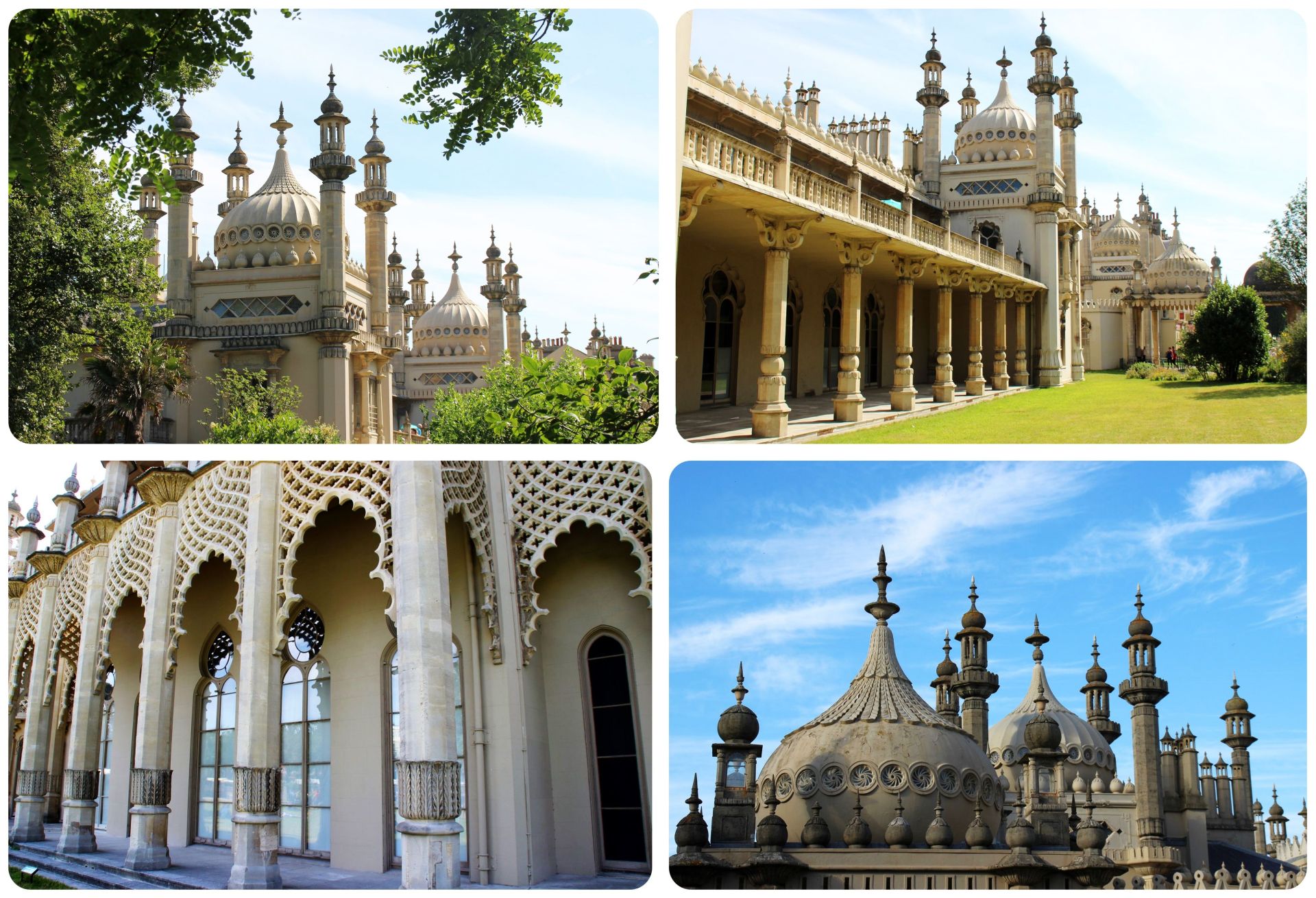 Brighton used to have not one but two piers – that was until the West Pier was destroyed by a fire. The iron and wooden skeleton of it still sits in the water, slowly deteriorating. I’ve noticed that the remaining parts of it have gotten smaller since I first visited Brighton in 2005, but the West Pier still draws a lot of people every day – it makes a great backdrop for Brighton’s stunning sunsets. 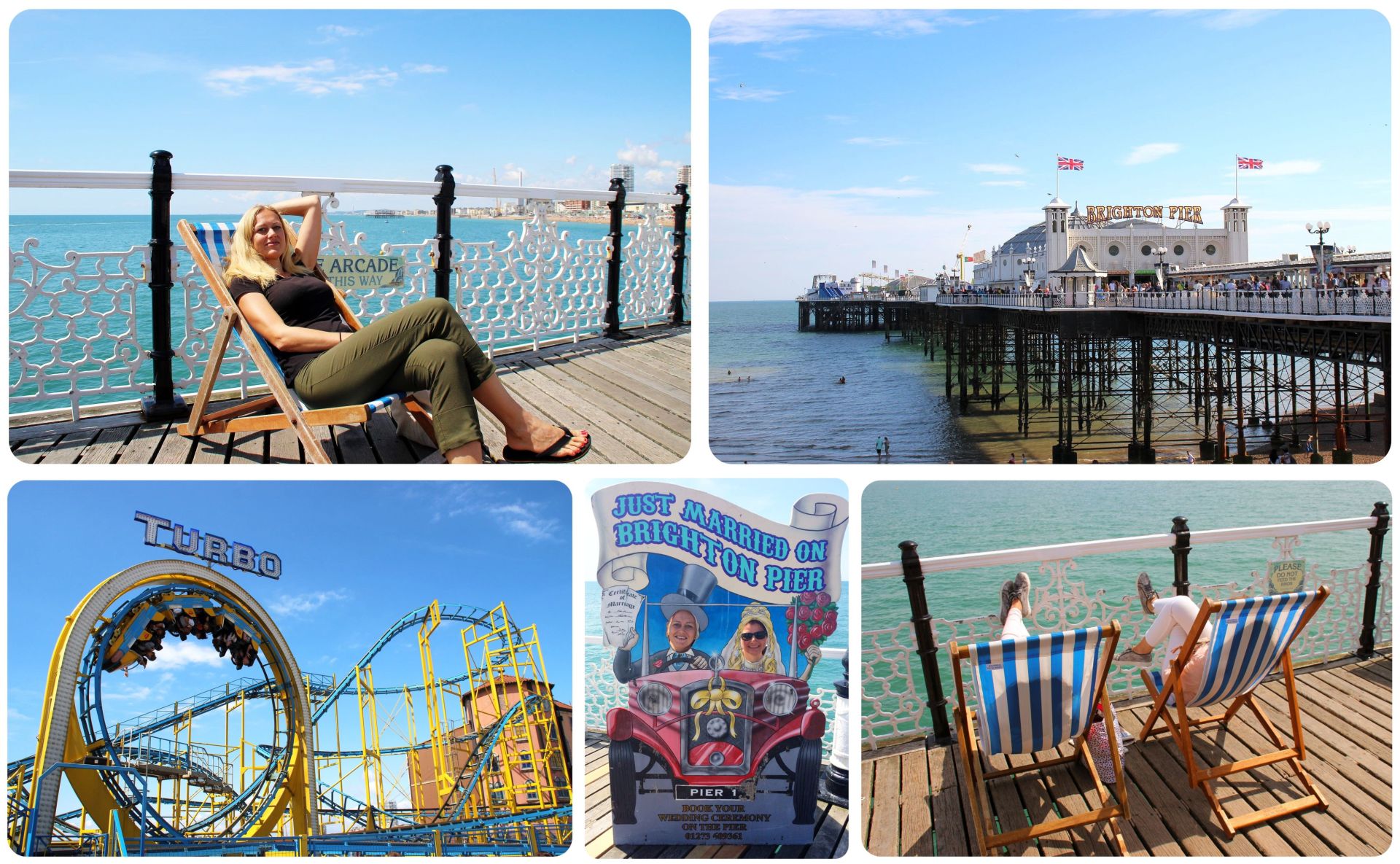 The other pier, Brighton Pier, is still up and running, including its antiquated games arcade which is always teeming with people, and a small amusement park at the very end of the pier, where antique carousels meet modern day roller coasters and other thrill rides. Even though some might call it cheesy, it is one of the last remaining 19th century piers of such size in the country. I personally love walking along the wooden boardwalk, grabbing a bag of freshly fried, still warm doughnuts and enjoying them in one of the deck chairs while looking out over the ocean and Brighton’s beaches, the ever present crying seagulls hovering above me (be careful when you grab a bag of fish and chips – these seagulls are not afraid to come down and grab food right out of our hands!). 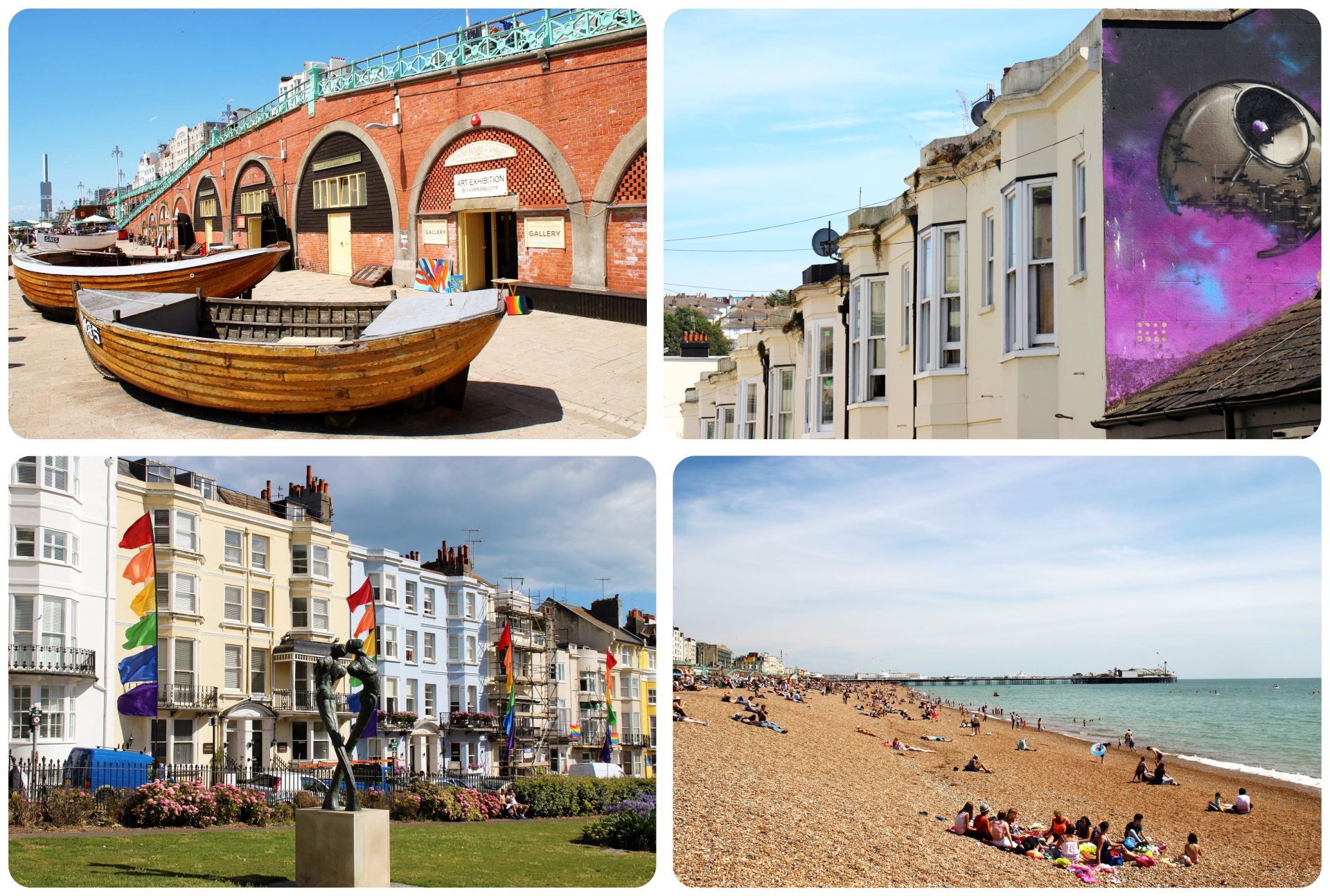 Brighton has an amazing culinary scene that goes way beyond British pubs and the same ol’ chain restaurants I know from other cities in the UK. Not only does Brighton have a great selection of vegetarian restaurants, but you can also indulge in heavenly baked goods in one of the many bakeries and coffee shops (trust me, I don’t think there was a day when I didn’t treat myself to a slice of cake, a cupcake, scones or afternoon tea!), enjoy a variety of ethnic cuisine, fresh and organic food, and there are high-end fine dining eateries for a special occasion (like the Restaurant at Drakes, the award-winning vegetarian restaurant Terre A Terre or 64 Degrees). The diverse and scrumptious culinary scene is something that makes Brighton stand out, and some of the restaurants that I recommend you check out are: Egg & Spoon, the Artisan Deli & Coffee House, Metro Deco for afternoon tea, St James Pub, Bill’s, the Redroaster Coffee Shop, the Basketmakers Arms Pub, Fishy Fishy for seafood and Riddle & Finns for champagne & oysters, Wai Kika Mu Kau and Food For Friends for vegetarian and vegan food (the latter is more upscale, the former casual), Pelicano House and The Marwood for coffee & cake, Sabai Thai and Muang Thai for Thai food, That Little Tea Shop In The Lanes for cake and tea, Angel Food Bakery for cupcakes. 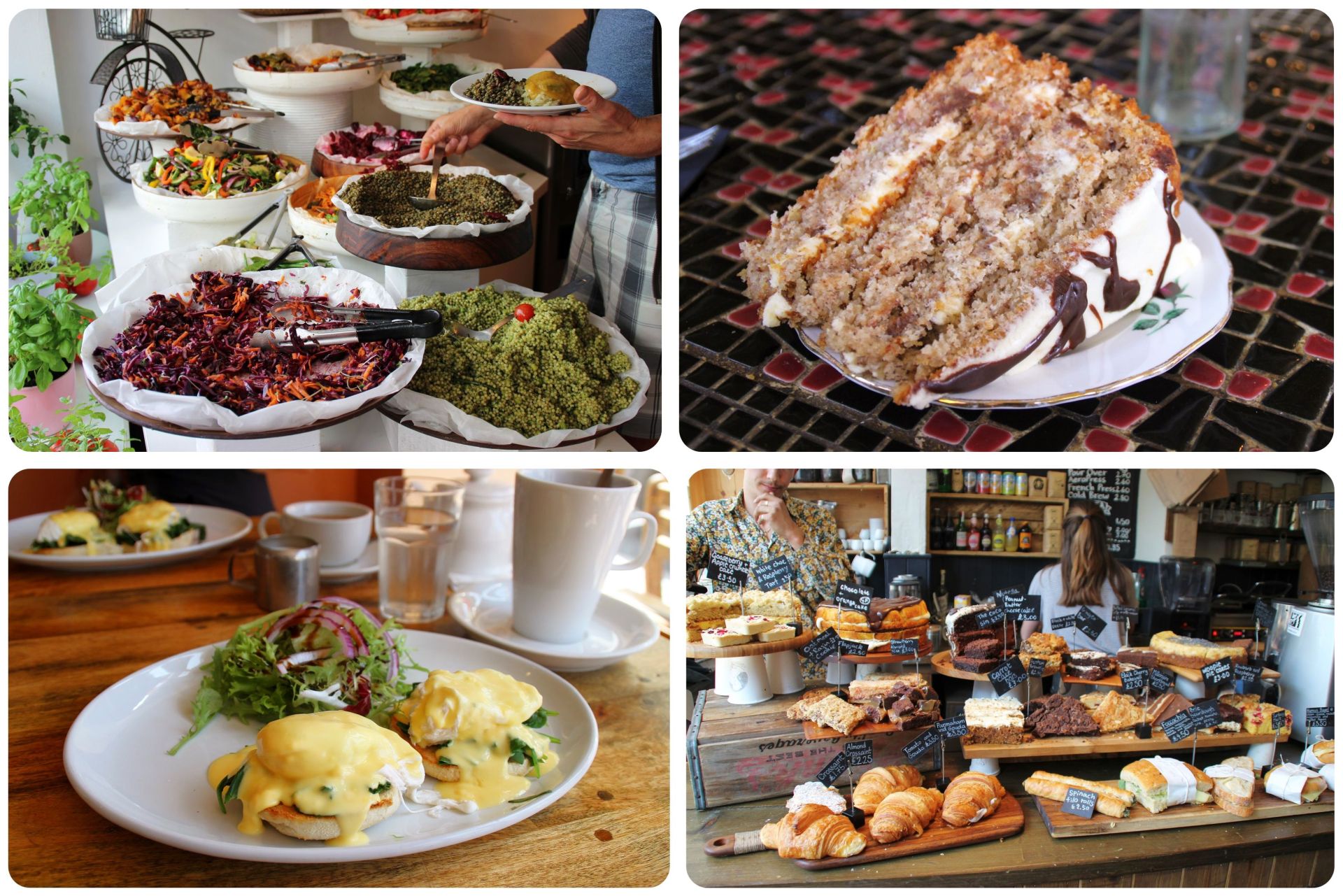 Brighton is only a 50-minute train ride from London’s Victoria Station, making it a perfect day trip destination. Tickets, if bought in advance, can be found for as little as £5 via TheTrainline.com – I myself was able to snatch one of these discount tickets when I visited Brighton last month, in the middle of summer high season. 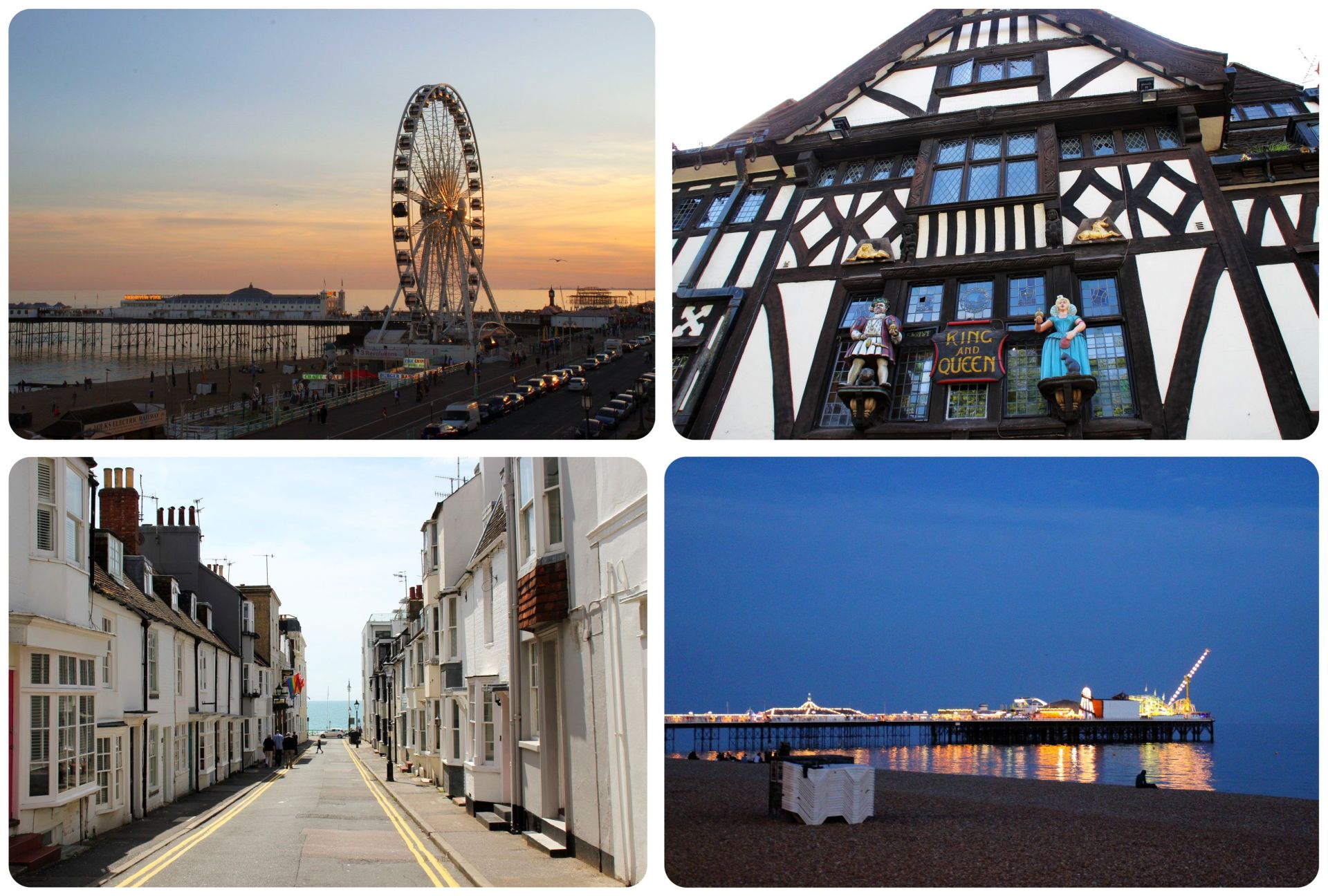 Even though a day trip is tempting, I recommend taking more time to enjoy Brighton’s nightlife and to have enough time to explore the town as well as fit in some relaxing beach time. If you decided to spend a night (or two – there are enough day trips from Brighton to make a longer visit worthwhile) I highly recommend the new YHA hostel which is located smack dab in the middle of all the action and a minute from the beach for budget travelers, and the funky and gay-friendly B&B Snooze in the Kemp Town neighborhood if you feel like splurging on something out of the ordinary. 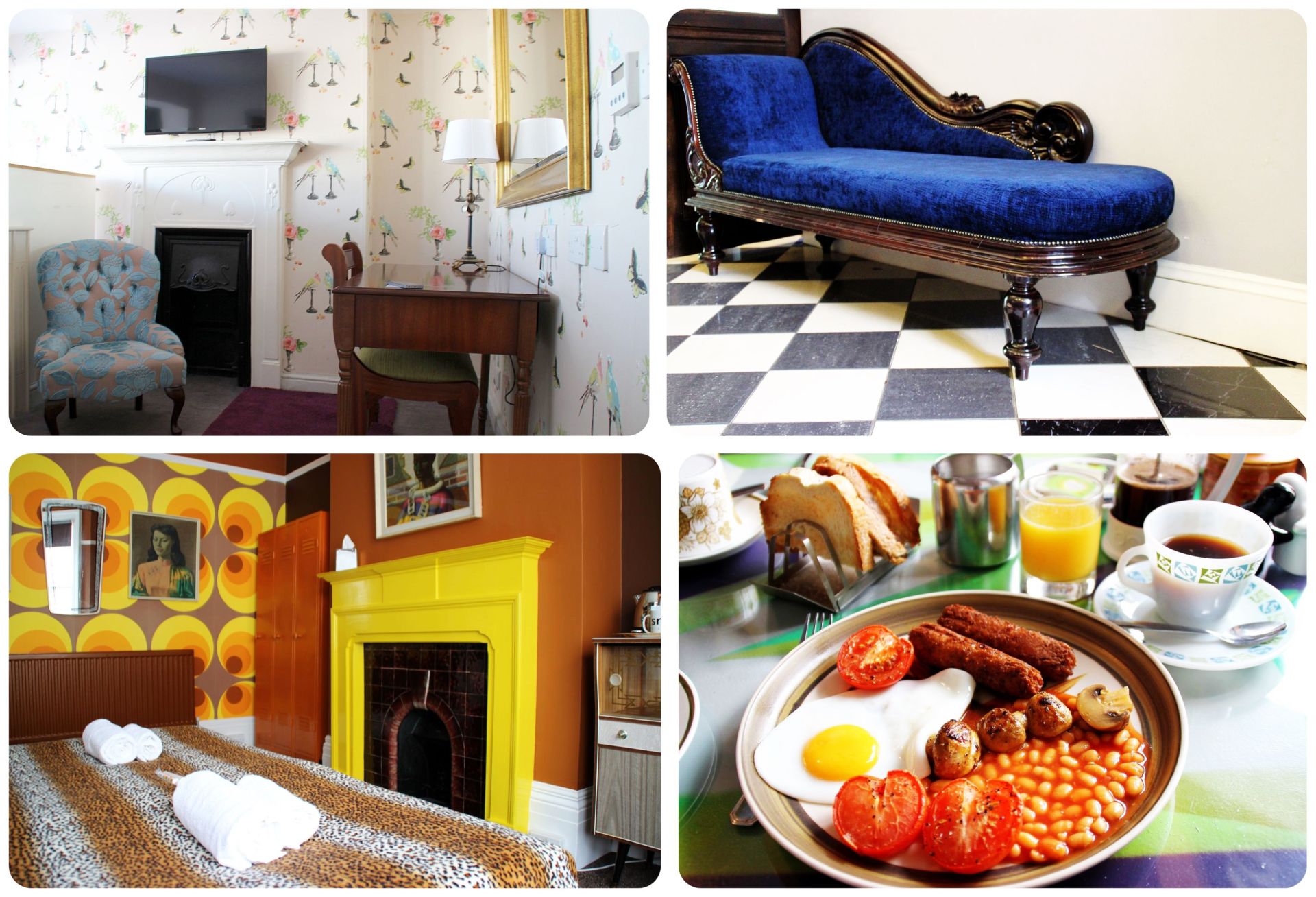 For more information, accommodation recommendations and events in Brighton, check out VisitBrighton.com.

I visited Brighton as part of the fabulous Must Love Festivals project. My stay was organized with the support of VisitBritain and Expedia. All opinions are my own.