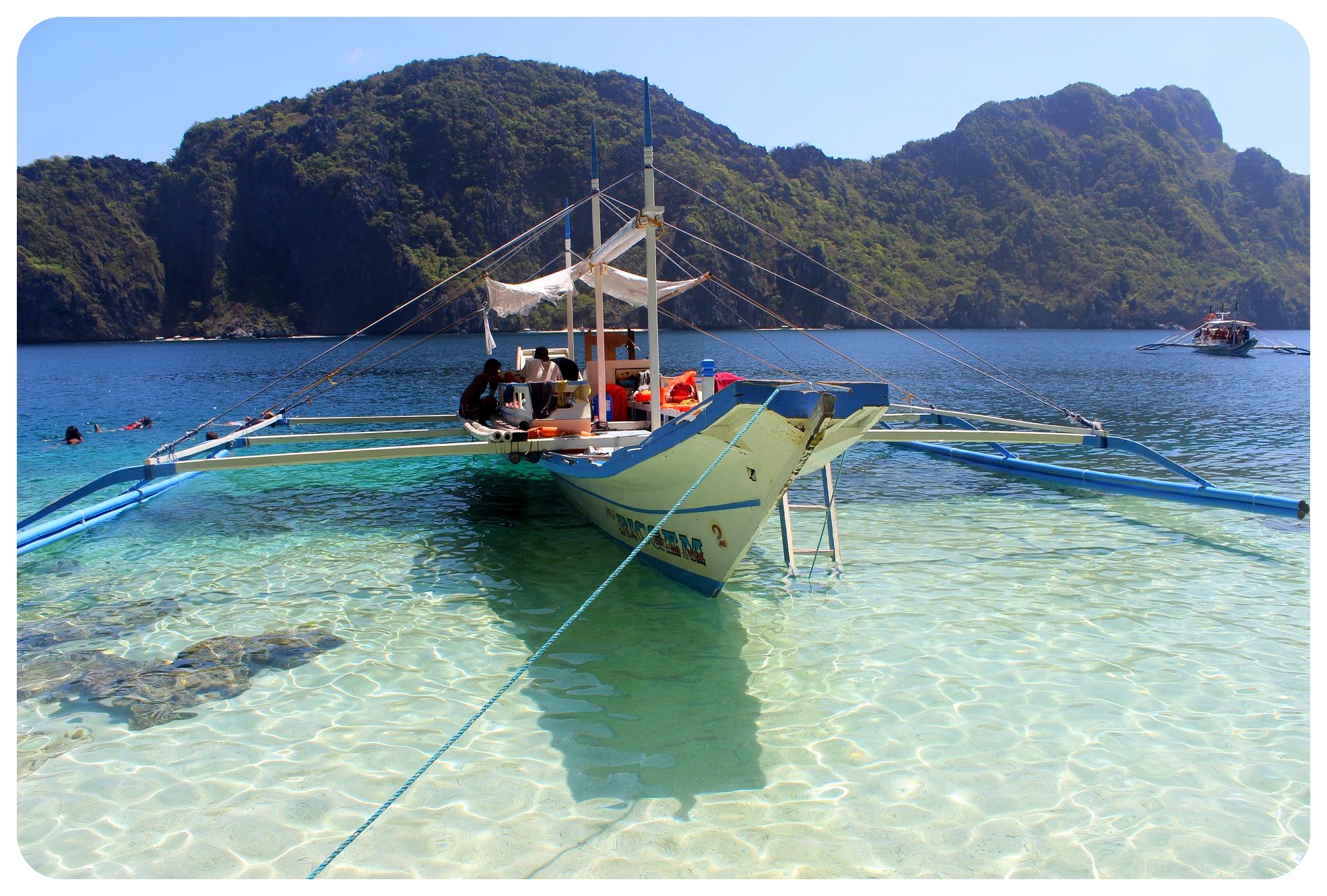 You can read more about my time in El Nido in Part I: The grand finale of my Philippines trip: El Nido – this is the continuation of my trip to Palawan, plus my best El Nido travel tips. 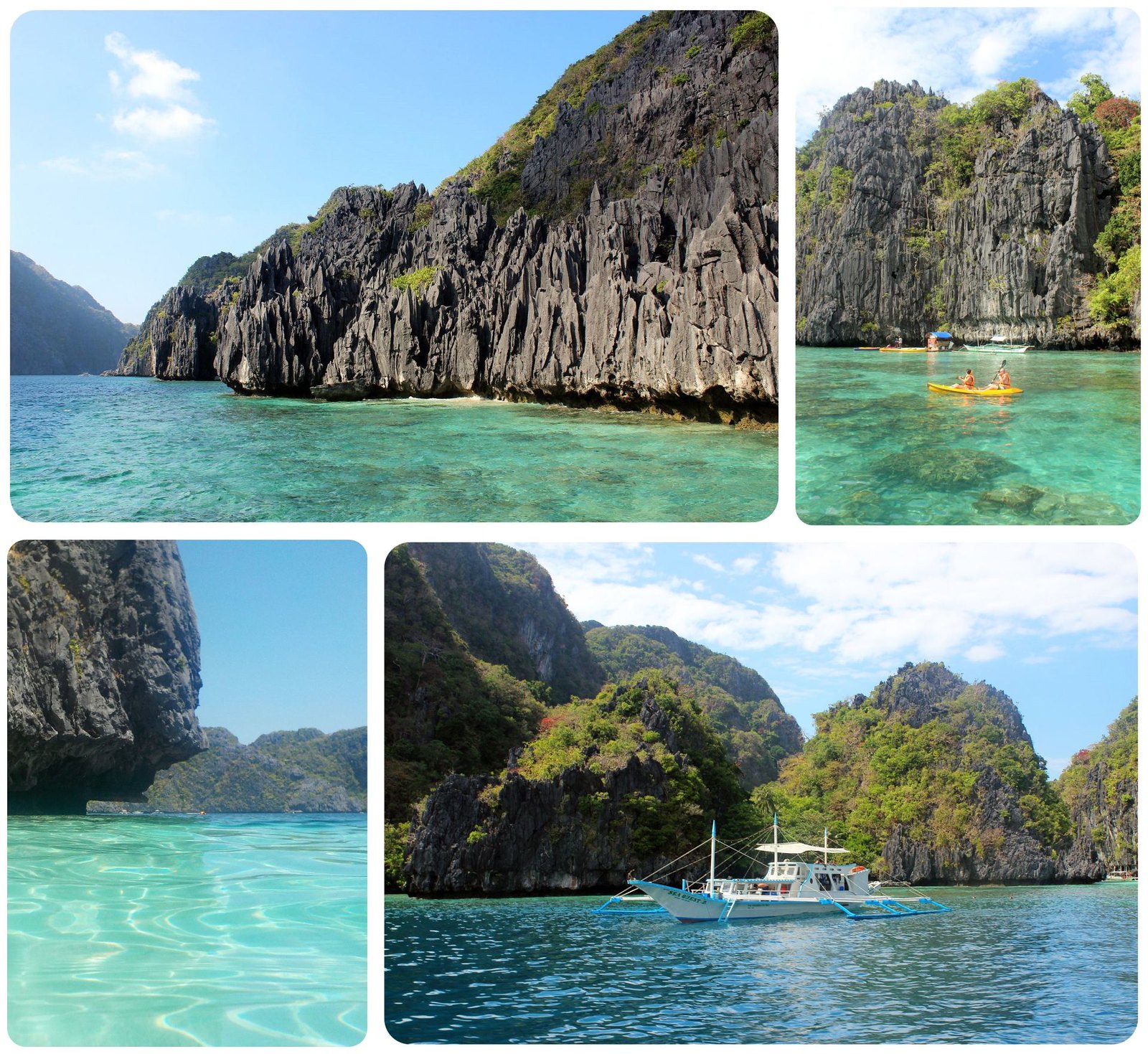 After a beach day, it was time to set off on my second island hopping trip – another day on a tiny Filipino fishing boat that would involve several stops at secluded beaches on small islets in the Bacuit Archipelago. For my second island hopping tour I had chosen tour C – after having heard mixed reviews about this one from other travelers who had done Tour C a couple of days earlier, I had shortly contemplated hopping on tour B (caves) or D (beaches) instead, but then C still looked the most interesting (there are photos of all the stops of each tour in the travel agencies around town) and the mixed reviews had resulted from a spell of bad weather that caused the boats to take another route and skip some of the best stops. 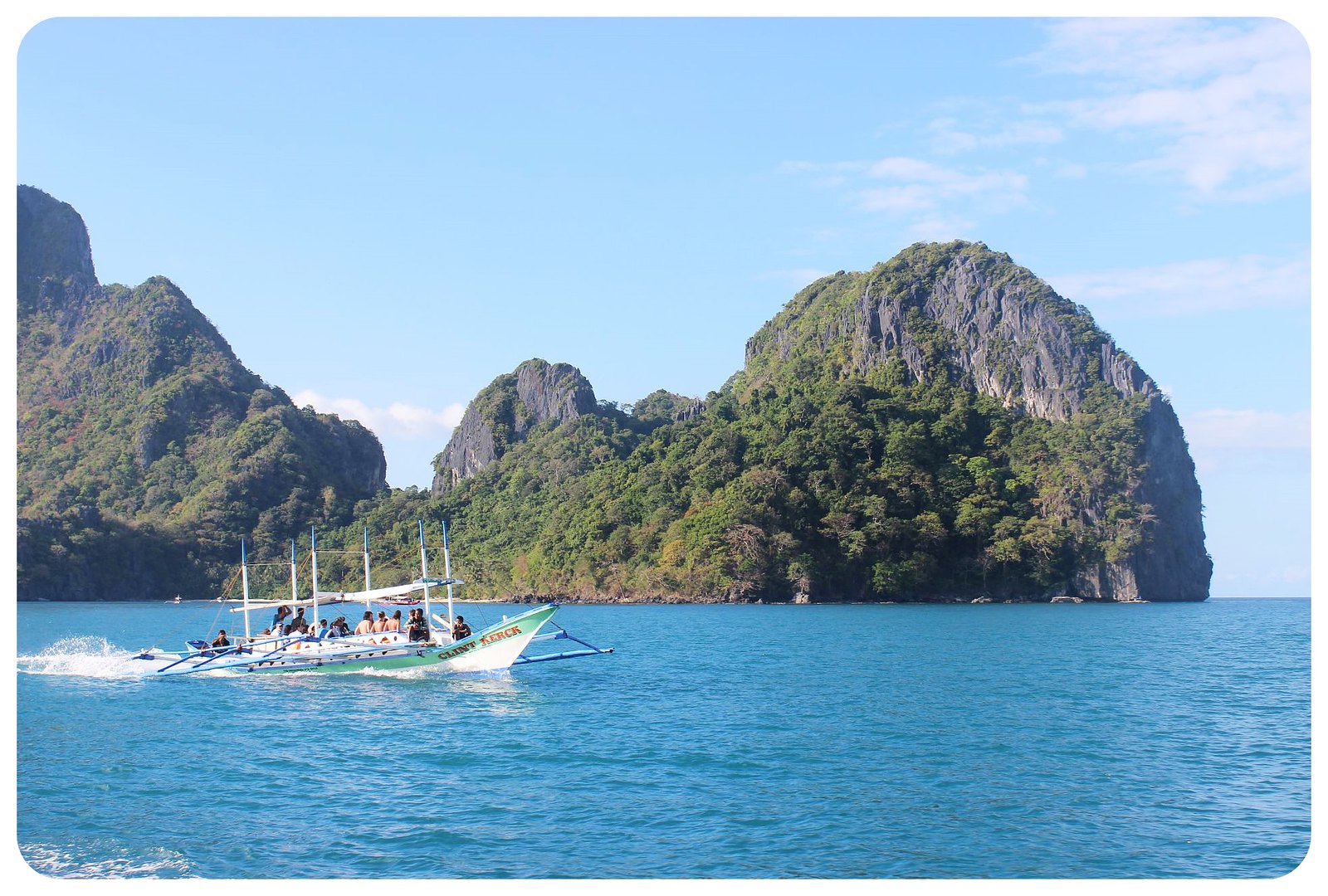 By the time I boarded the boat, the bad weather had luckily moved on and we started with bright blue skies and lots of sun. The stops were similar to Tour A – first a snorkeling stop on a small beach (Helicopter Island), then a buffet lunch at stop two, followed by another gorgeous little beach, and an exhilarating swim to a small hole in the limestone rocks that led to a hidden beach in a tiny lagoon. This one was by far my favorite stop even though I was exhausted from swimming through the open sea (the waves were insane). But finding this little hidden oasis on the other side of the rocks made it totally worth it. 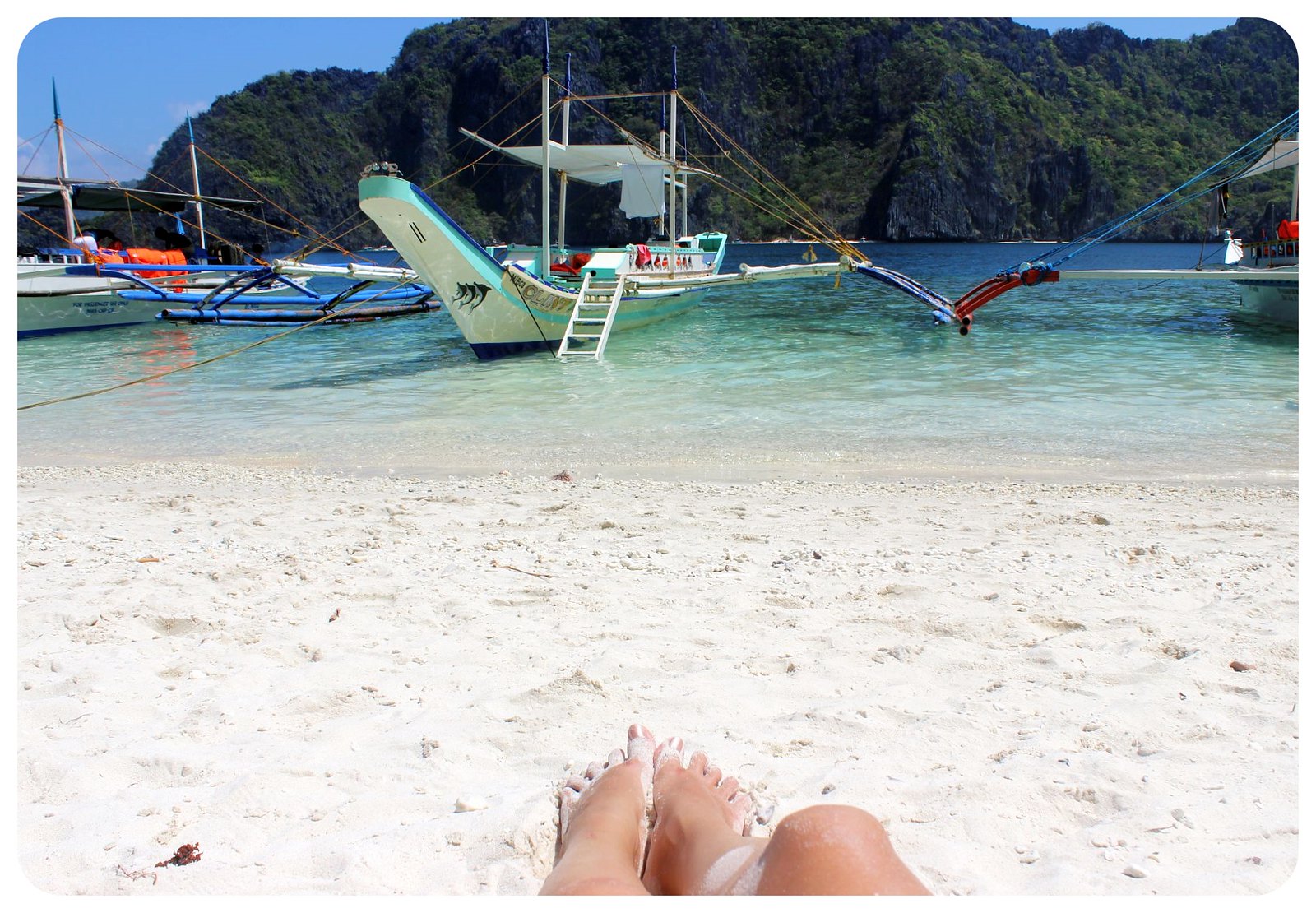 The next stop was a bit creepy – an abandoned catholic shrine built by a German guy who had married a Filipina, but in 2007 it was suddenly abandoned. Since then, people can visit the island and the various shrines, some of which are inside little caves. Even though the island felt a bit sinister to me, the vistas from a high up viewpoint were stunning. 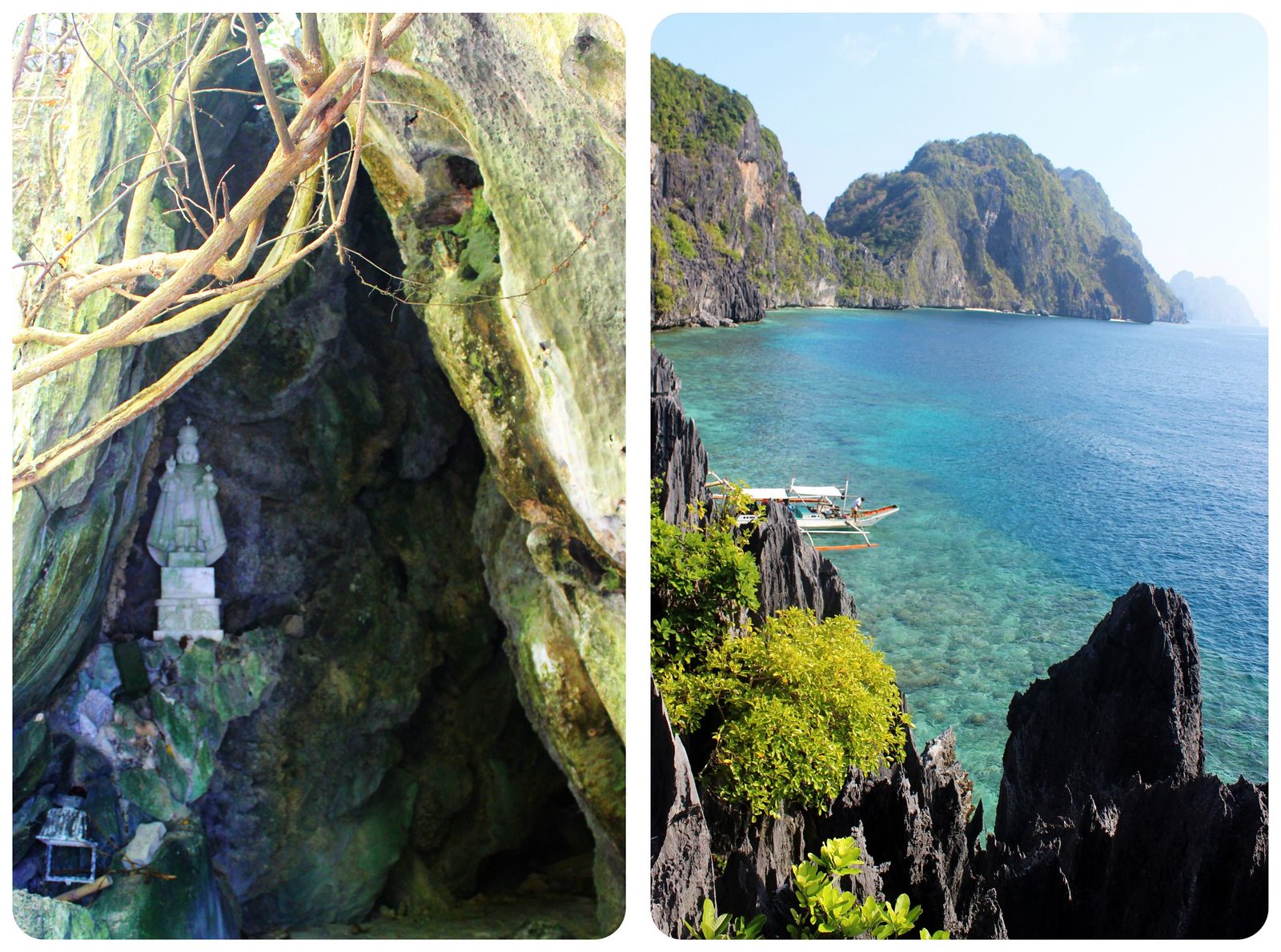 Our last stop for the day was star fish beach, aptly named for the many star fishes here. Another great snorkeling experience with colorful fish, coral and crystal clear water. 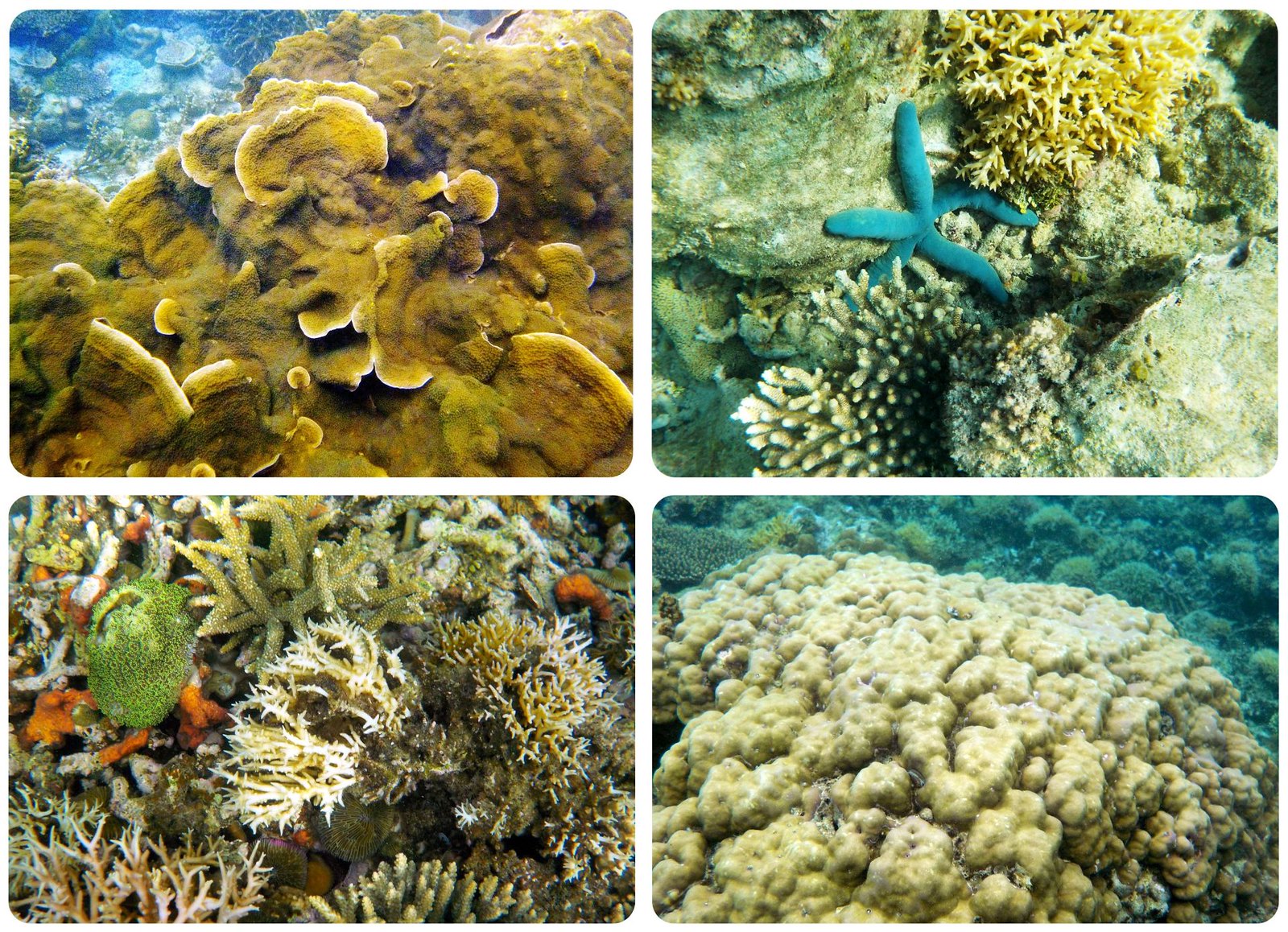 We were all still on a high from the marine life we’d just seen when we hit the open sea to return to El Nido and were hit by huge waves that got us soaked within minutes. Luckily we were able to put our belongings below deck, safe from the water, otherwise phones and cameras would have gotten soaked as well. 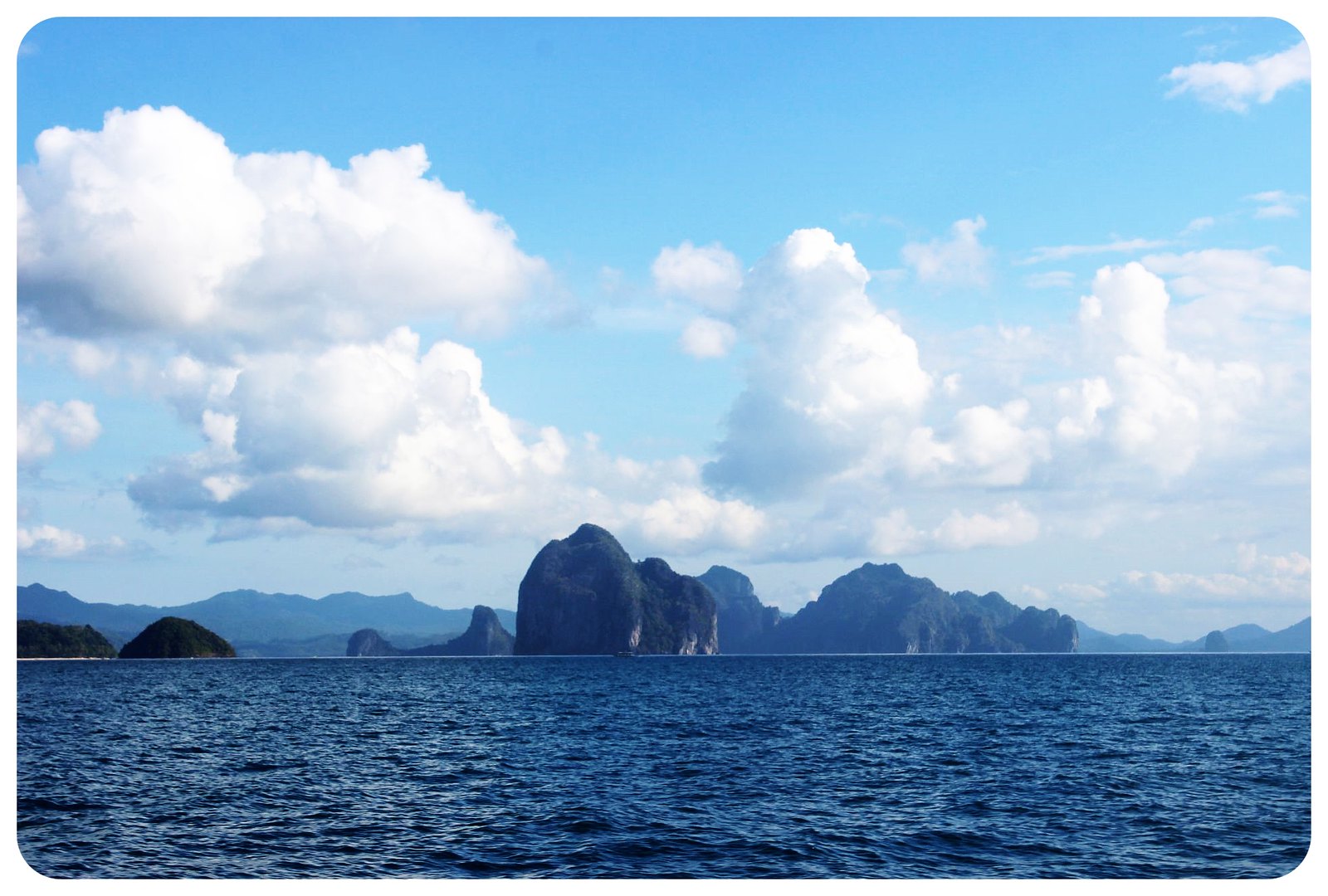 Note: The stops on tour C were much further out in the open water than the stops in tour A. If you are trying to decide between those two tours and you get seasick easily, I recommend joining tour A. The waves on the stretch between stop 1 and 2 and between stop 5 and returning to El Nido were crazy high; I felt like I was on a roller coaster ride.. a really bumpy one. 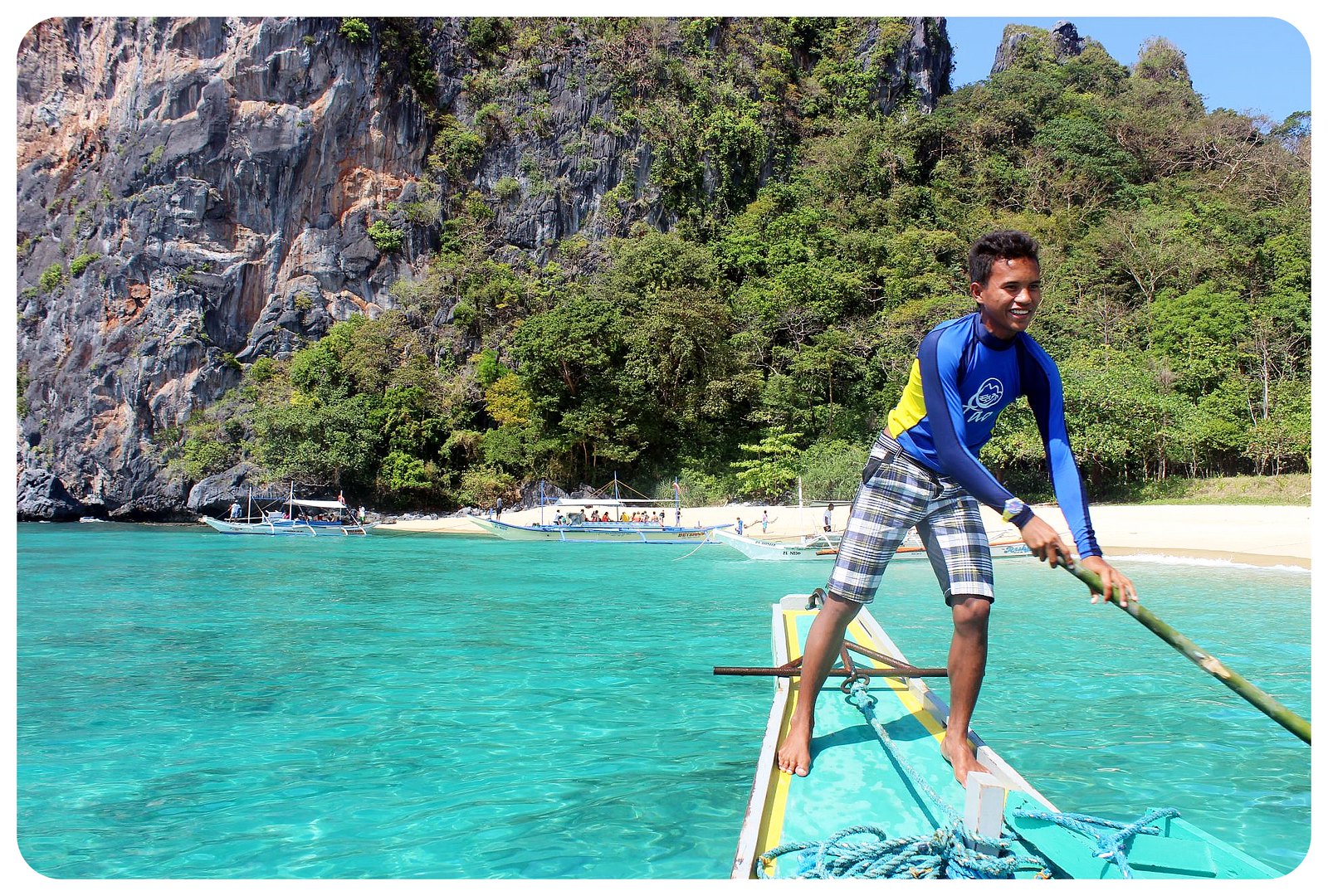 As soon as El Nido came into sight, I felt a wave of sadness come over me. My time at my last stop in the Philippines was coming to an end, and the next morning I’d be making way down to Puerto Princesa again to hop on a plane back to Manila. I wished I hadn’t booked my flight yet (but after the expensive lesson my short-term planning had taught me, I had no choice) so that I’d be able to visit Port Barton, another beach on Palawan everyone was raving about, or tour the underground river near Puerto Princesa, Palawan’s UNESCO site. But not having visited these places yet means I have a reason to go back to Palawan one day. 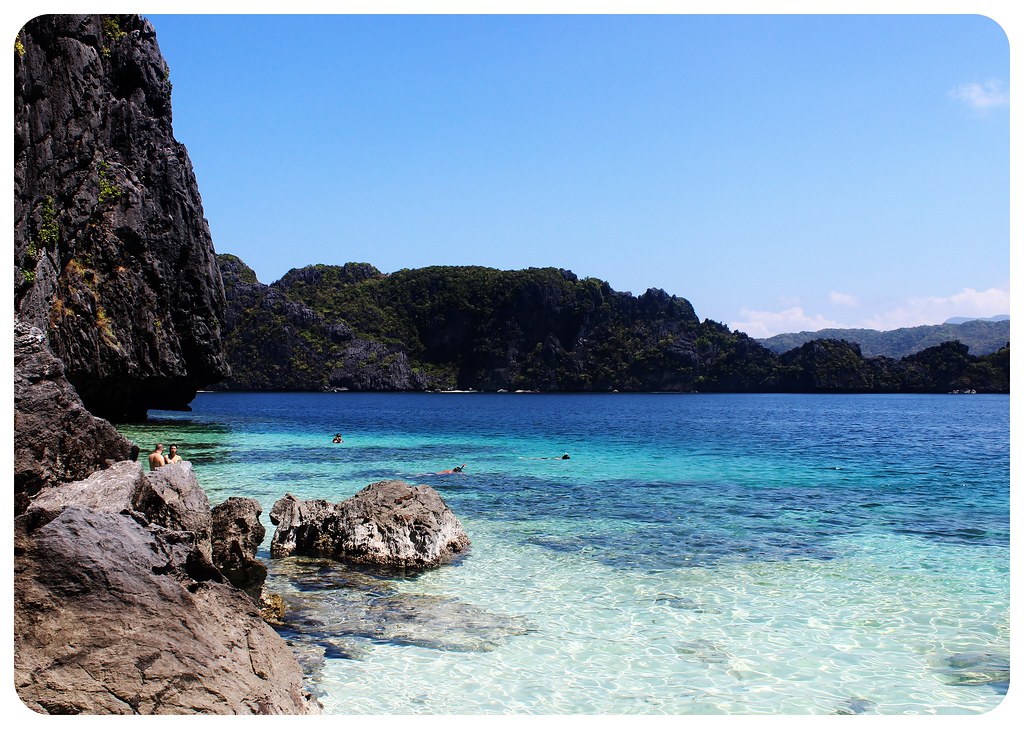 How to get to El Nido

There is only a small airport near El Nido Town which caters mainly to the guests of the pricey, exquisite resorts on the islands around El Nido. If money doesn’t play a role I recommend flying straight into this airport, since it’ll save you the 5-6 hour van ride from Puerto Princesa up to El Nido (via winding roads). There are three daily flights from Manila, one way is PHP6,750 (US$151). You can book tickets via [email protected]. 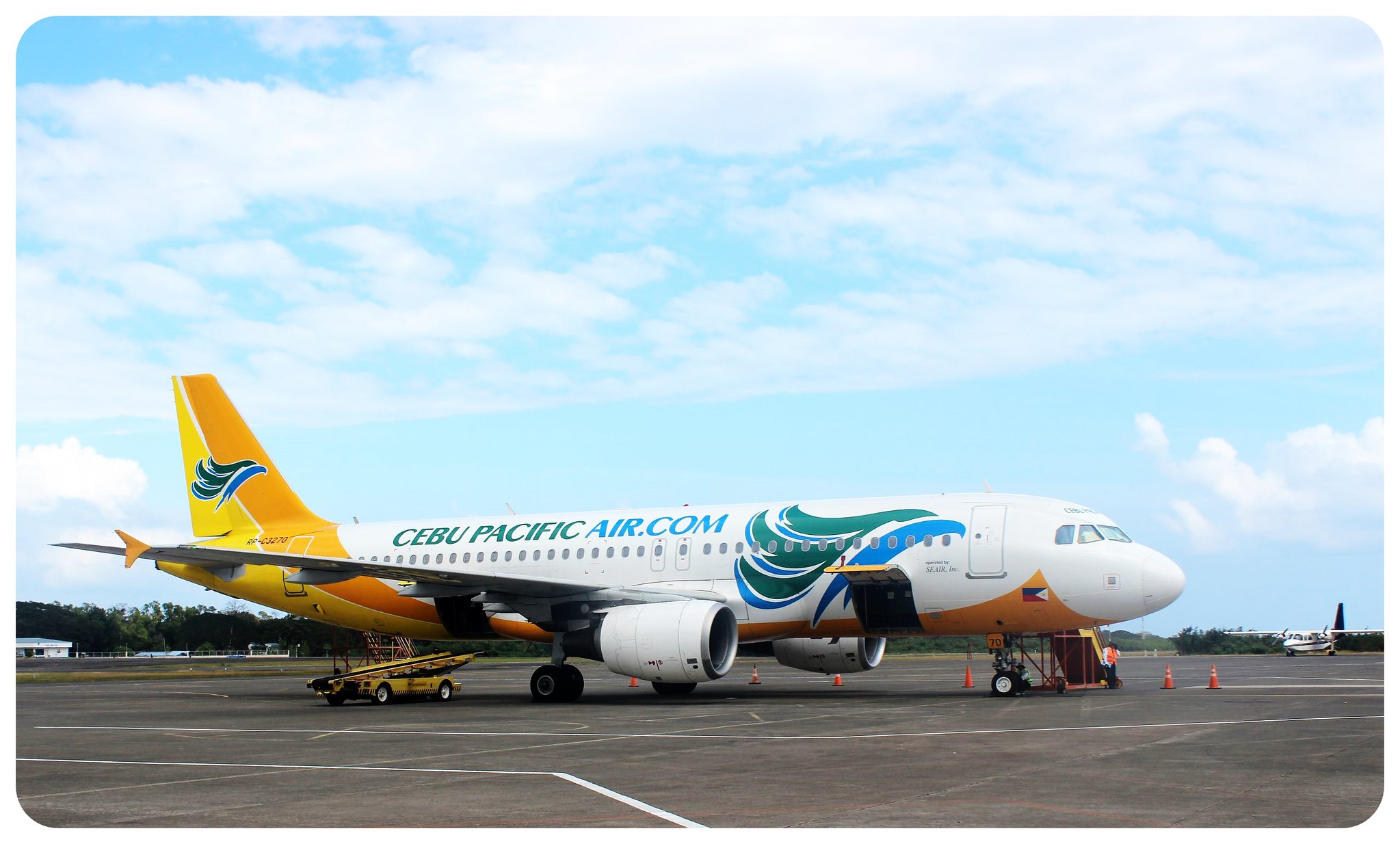 The main airport of Palawan is in Puerto Princesa, between 5 and 8 hours south of El Nido, depending on which mode of transportation you choose.

As soon as you exit the airport in Puerto Princesa, you’ll be welcomed by a bunch of yelling guys, all holding ‘El Nido’ signs, trying to sell you their minivan services. I had read that it was considerably faster than the public bus which takes 7 to 8 hours (because it stops for passengers everywhere along the way), and so I followed the next best guy to his little office, where they sold me a return ticket for PHP1,000 (US$22.50). The ride took 5 hours, but I frequently thought I might lose my life as the driver sped through the narrow, winding mountain roads, accelerating before every hair needle curve. I thought about taking the bus back, which is only about $2 cheaper, but when I heard a girl who’d taken it saying those were the most horrid 8 hours of her life, I decided to brave the van instead. The second time, the driver drove more responsible than on my way there. 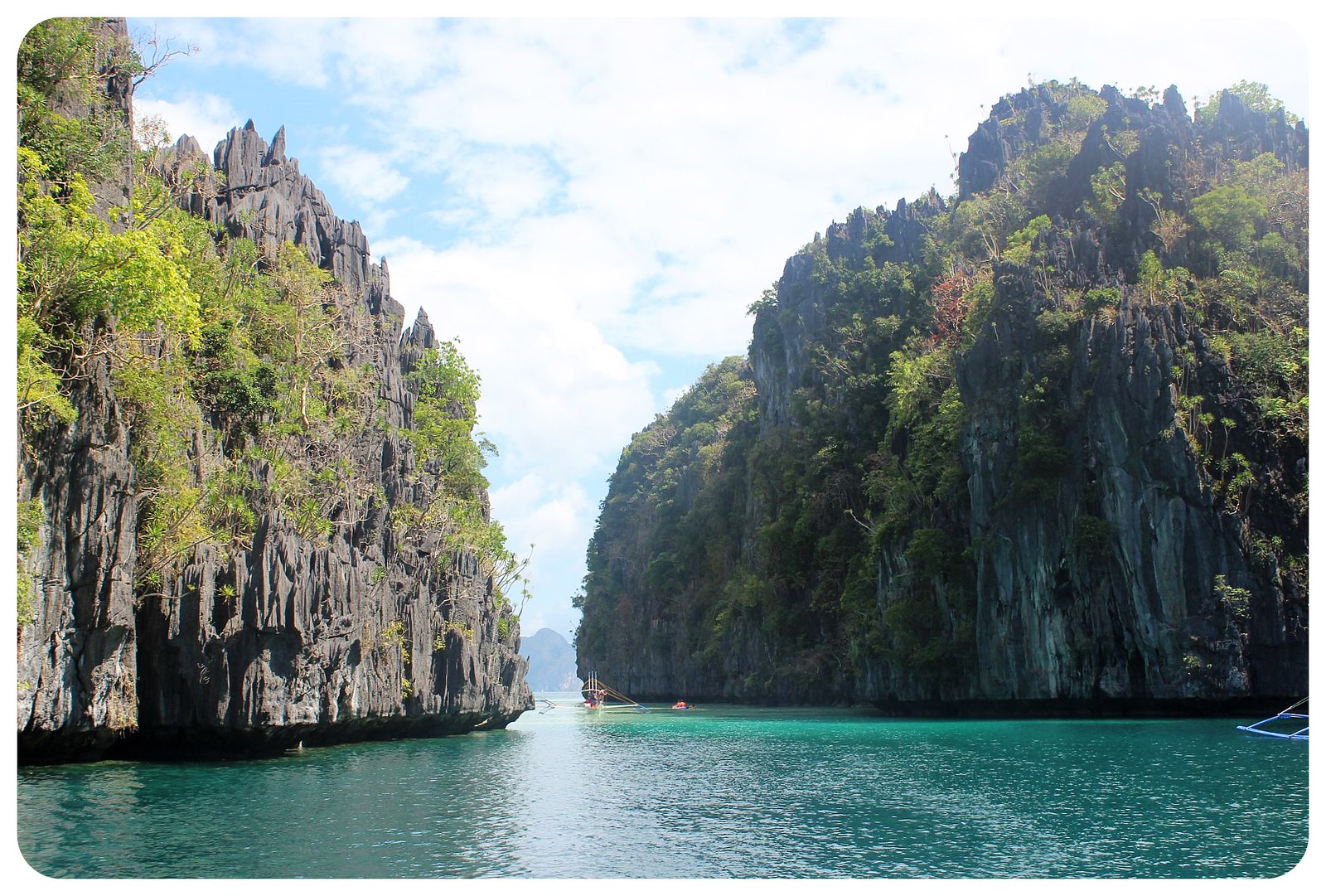 Where to stay in El Nido

Lonely Planet hits the nail on the head with its description of the accommodation situation in its El Nido travel guide:

Let’s just say that all the budget places I looked at in El Nido were not pretty. You basically get what you pay for. 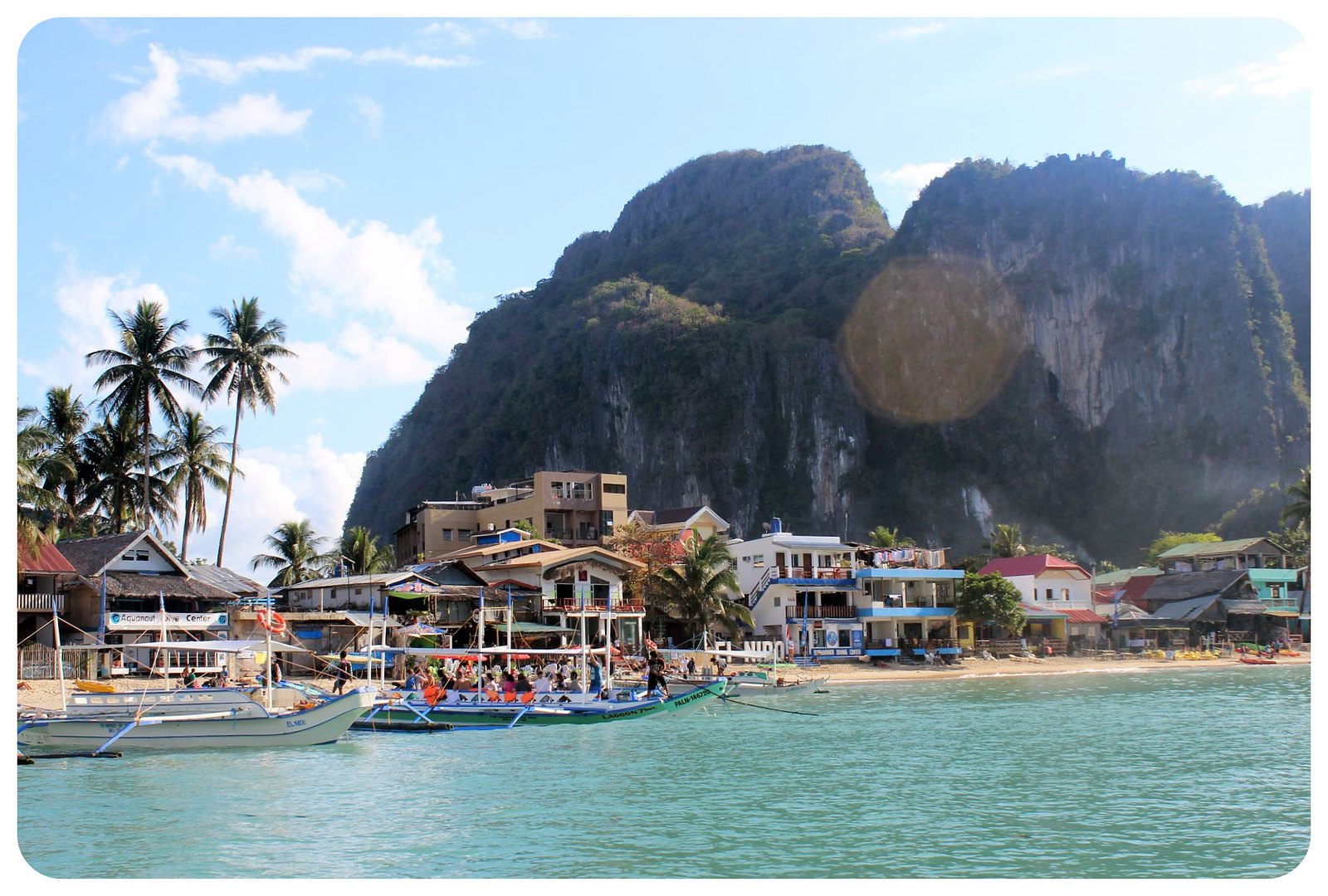 Later on I noticed that the further away from the beach you venture to find a hostel, the better the quality of the rooms, and the cheaper they get. There are lots of guest houses and hotels south of town towards Coron-Coron Beach. 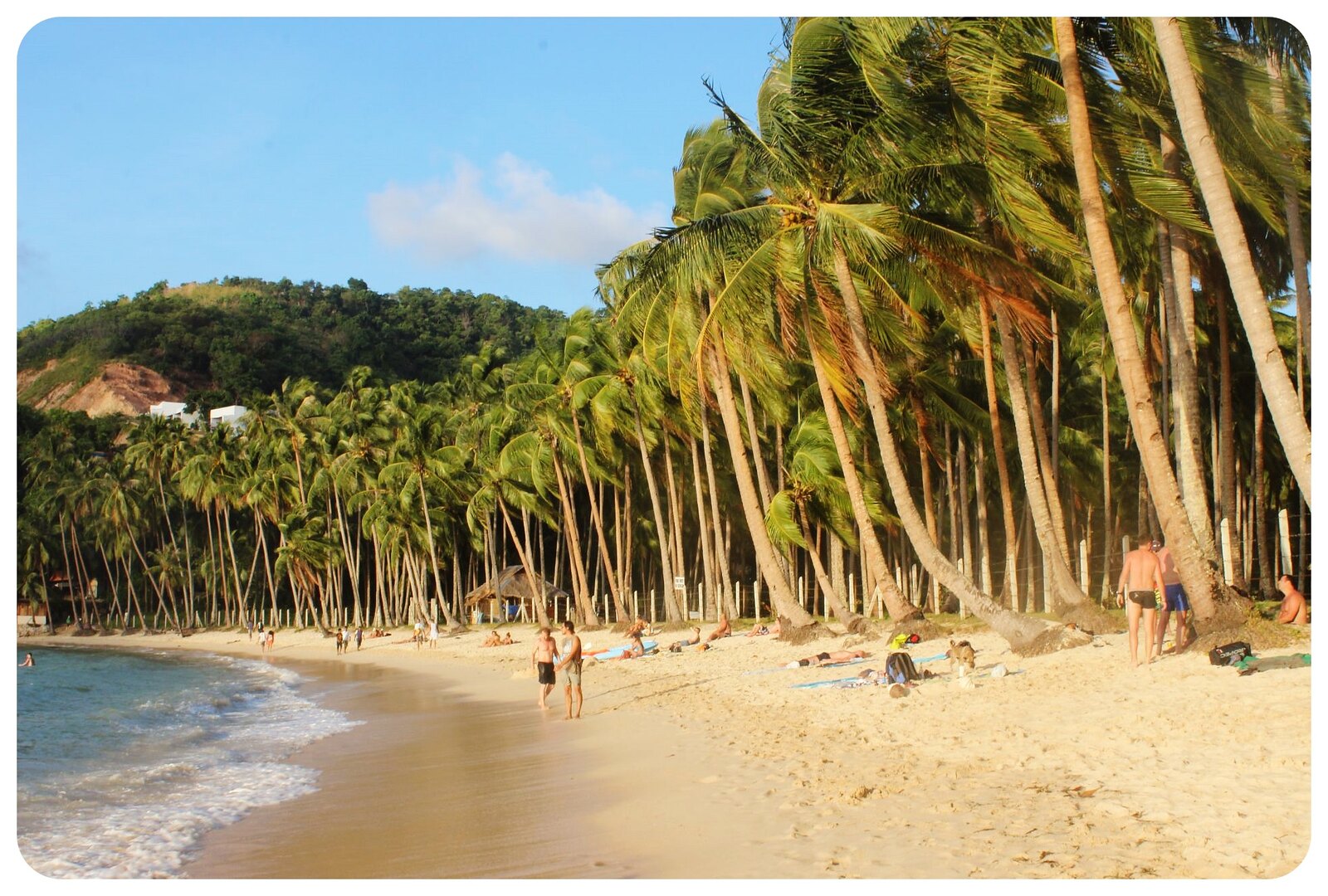 I would recommend that if you’re a couple and don’t care too much about going out and socializing at night, stay further away from the town. If you’re a solo traveler looking to meet people and to go out at night though, stay in town close to the beach. Frendz Hostel (see below) is a great place for solo travelers who want to make friends.

These are some of the best rated budget hostels & hotels to stay in El Nido: 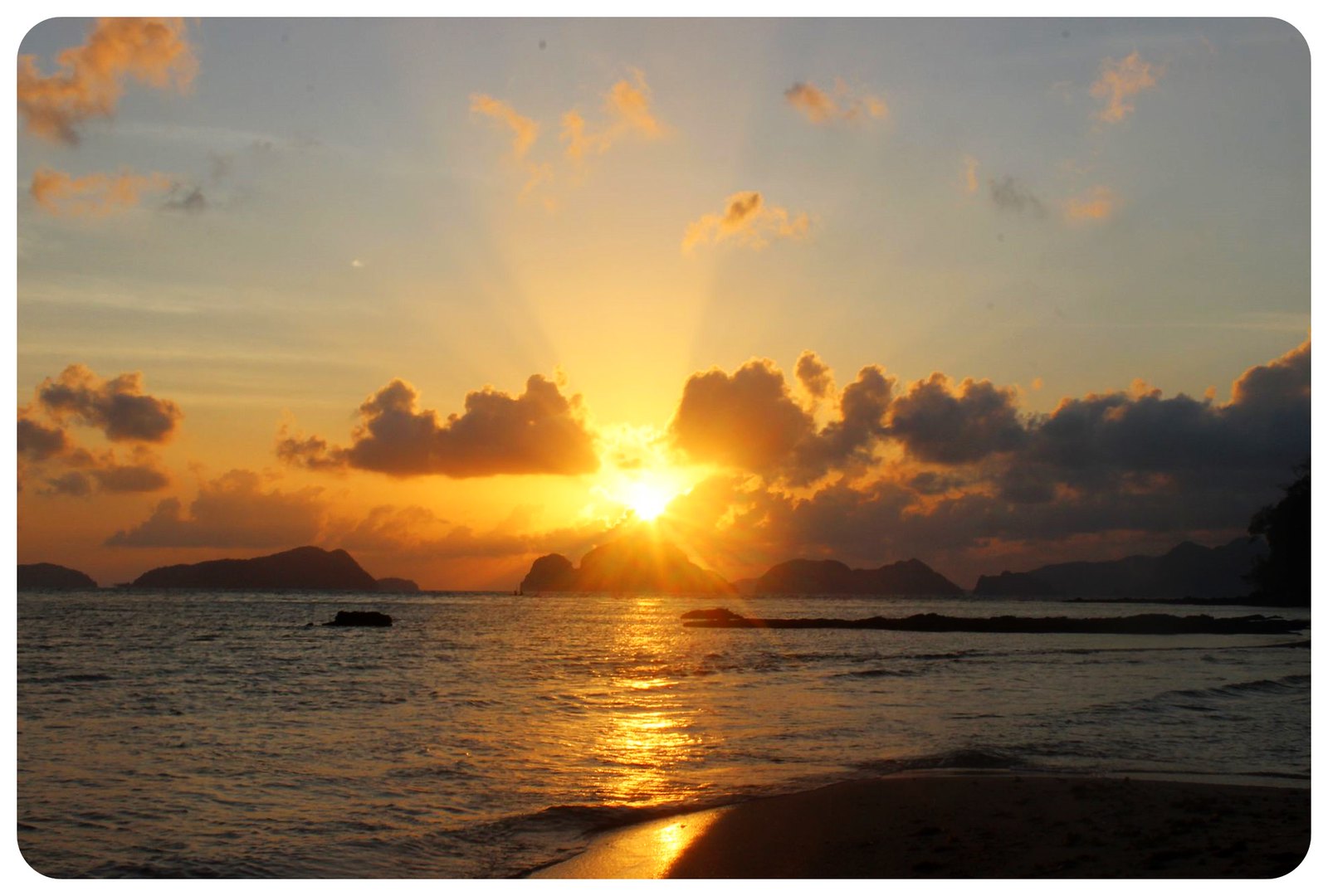 Where to eat & drink in El Nido 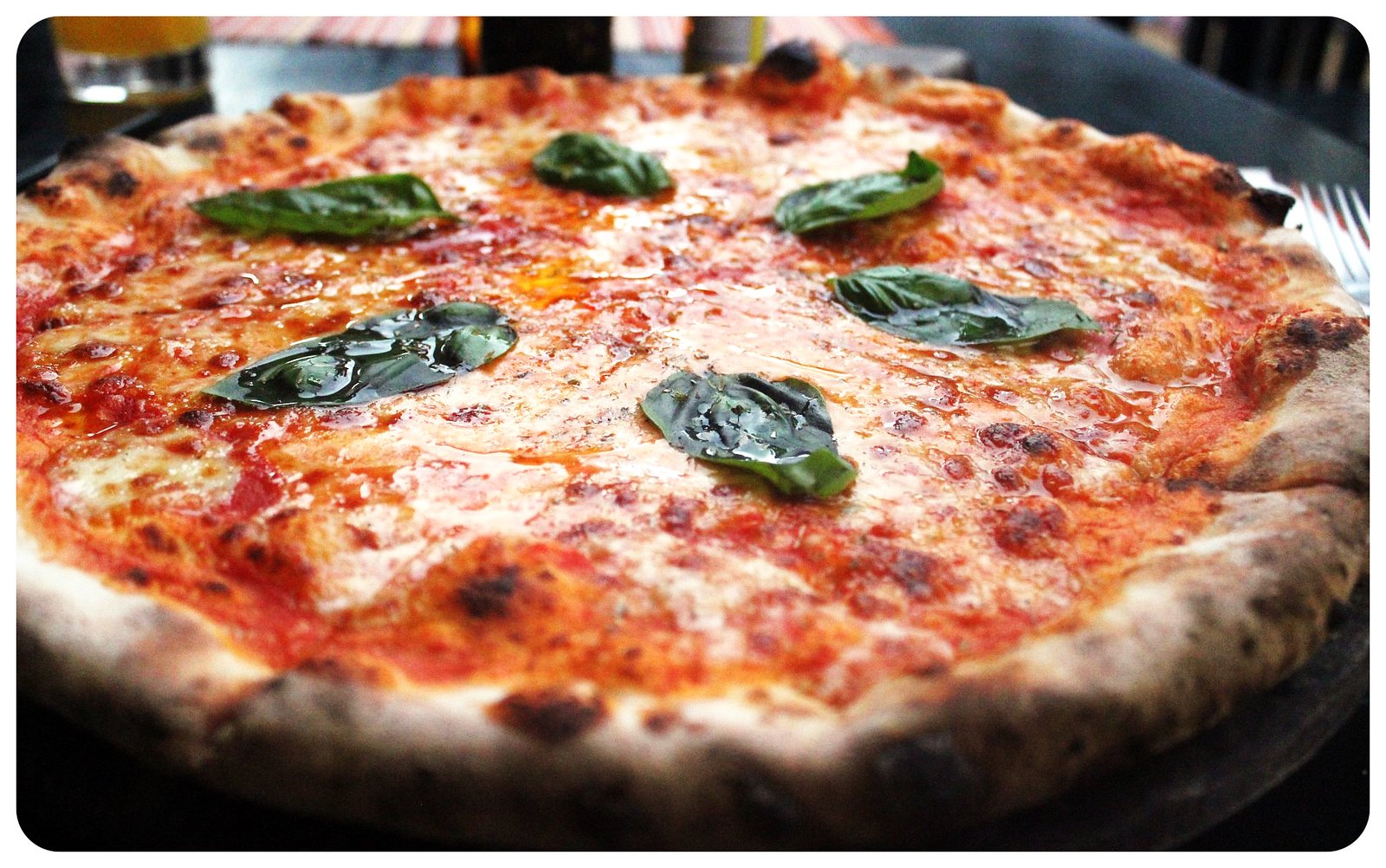 What to do in El Nido

Tour the islands around El Nido

Definitely take one of the island hopping tours – the islands are what El Nido really is about. If you’re strapped for time (and money), there’s a combo tour of A and C for PHP1,500 Pesos (US$33.75). I thought it would include the best of both tours, but a girl who went on this tour told me that it actually included ALL stops of both tours, just at a much faster pace. 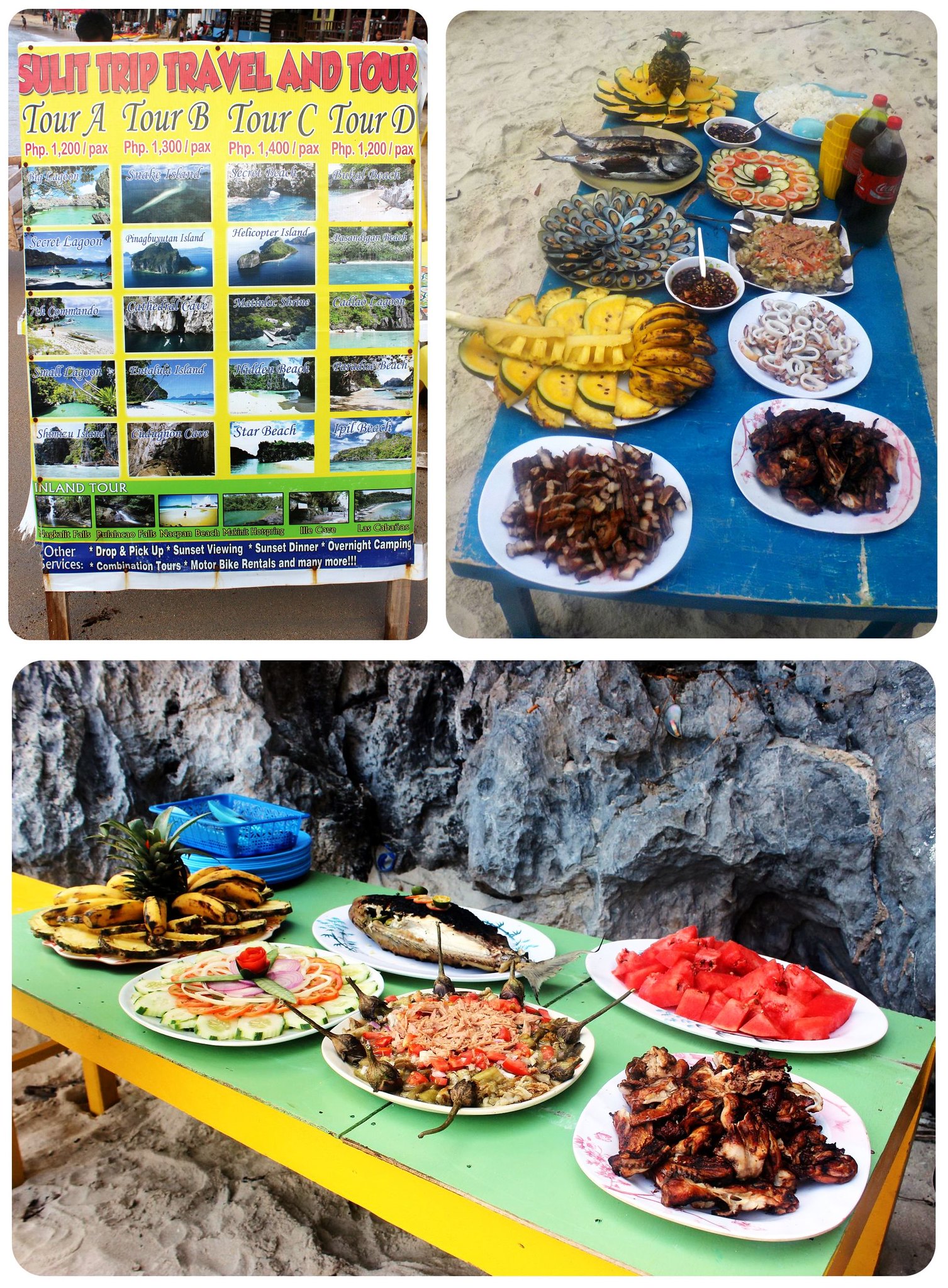 The beach in El Nido town is not the prettiest (and cleanest) and you can’t even watch the sunset from here. Luckily there are other nearby beaches that are beautiful and better for sunset watching, such as Coron-Coron (about 10 min by tricycle from town), Las Cabañas beach (15 min tricycle ride from town) and sunset beach (20 mins from town). All of the beaches have beach bars that serve snacks and drinks. 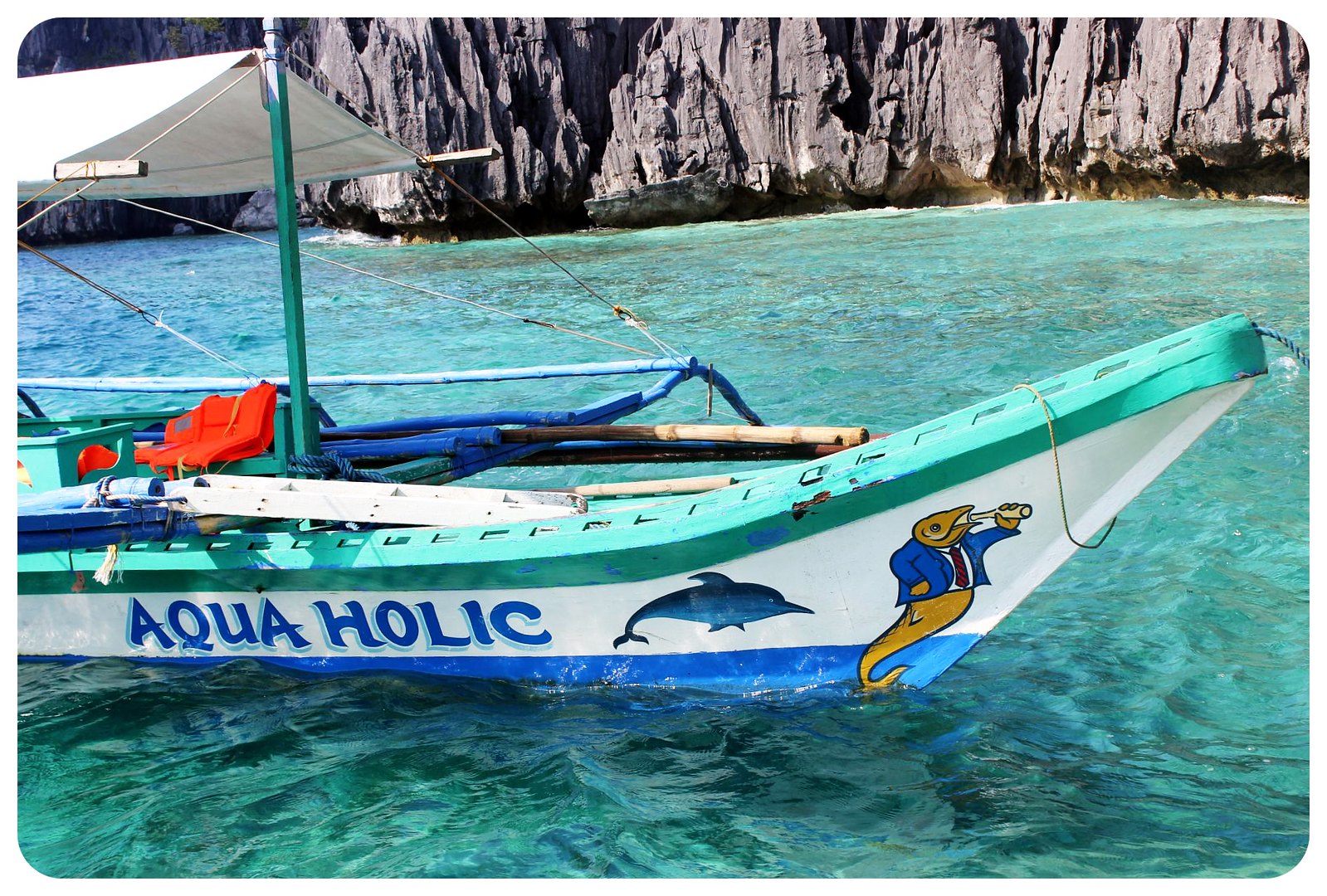 El Nido has a number of other activities to offer, such as diving, ziplining, wall climbing and kayaking – you can easily spend a week here and not get bored (just bring enough cash – see below!). 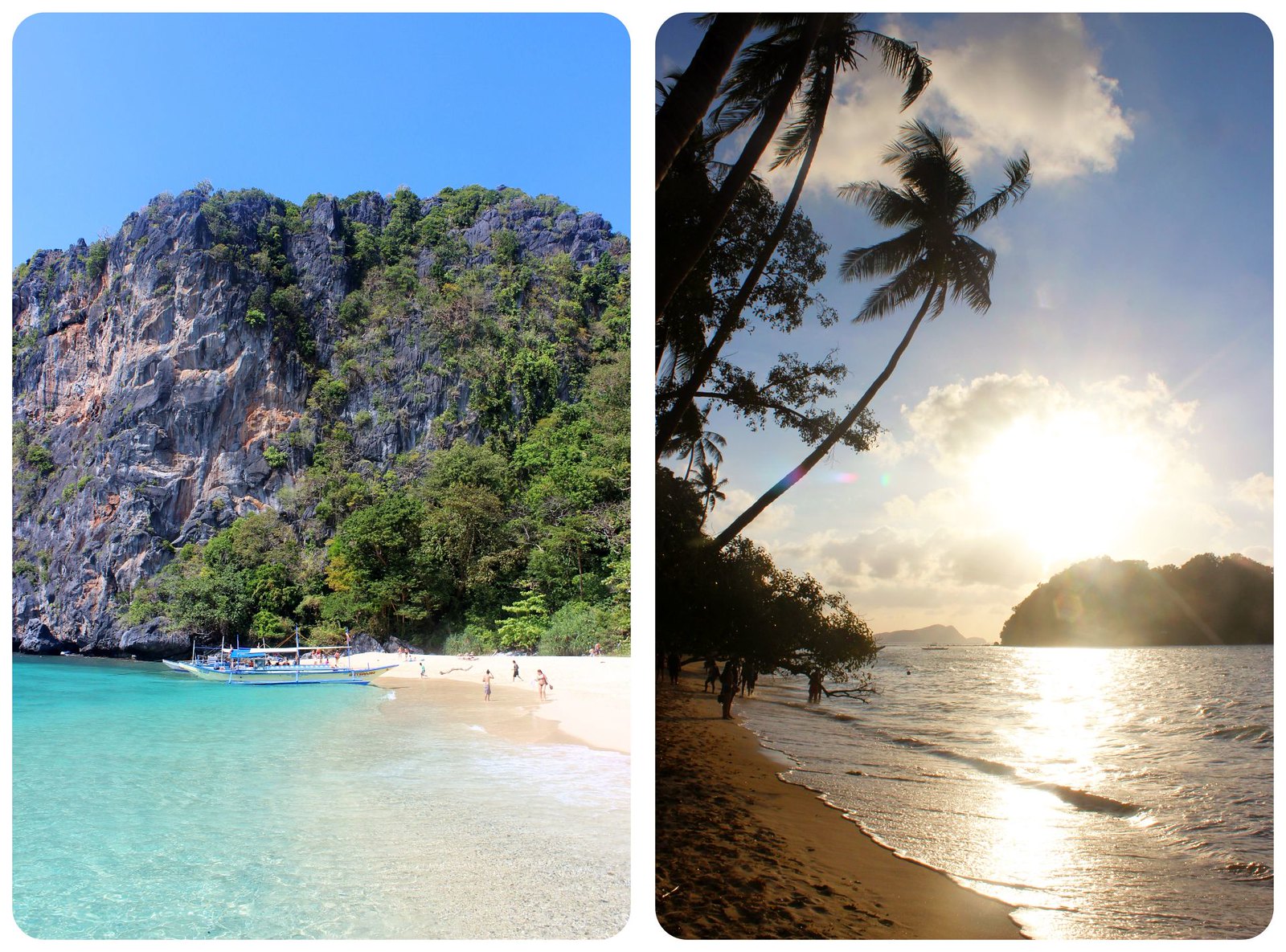 All of the above activities require cash. There is one cash machine in town that gives cash advances, but at a hefty 10% fee. Make sure to take out enough cash before you go to El Nido – the next ATM is about five hours away. My van transfer from Puerto Princesa included a stop at an ATM for this precise reason. I met quite a few people who would have stayed longer had they not run out of cash – so bring more than you think you’ll spend to be on the safe side. 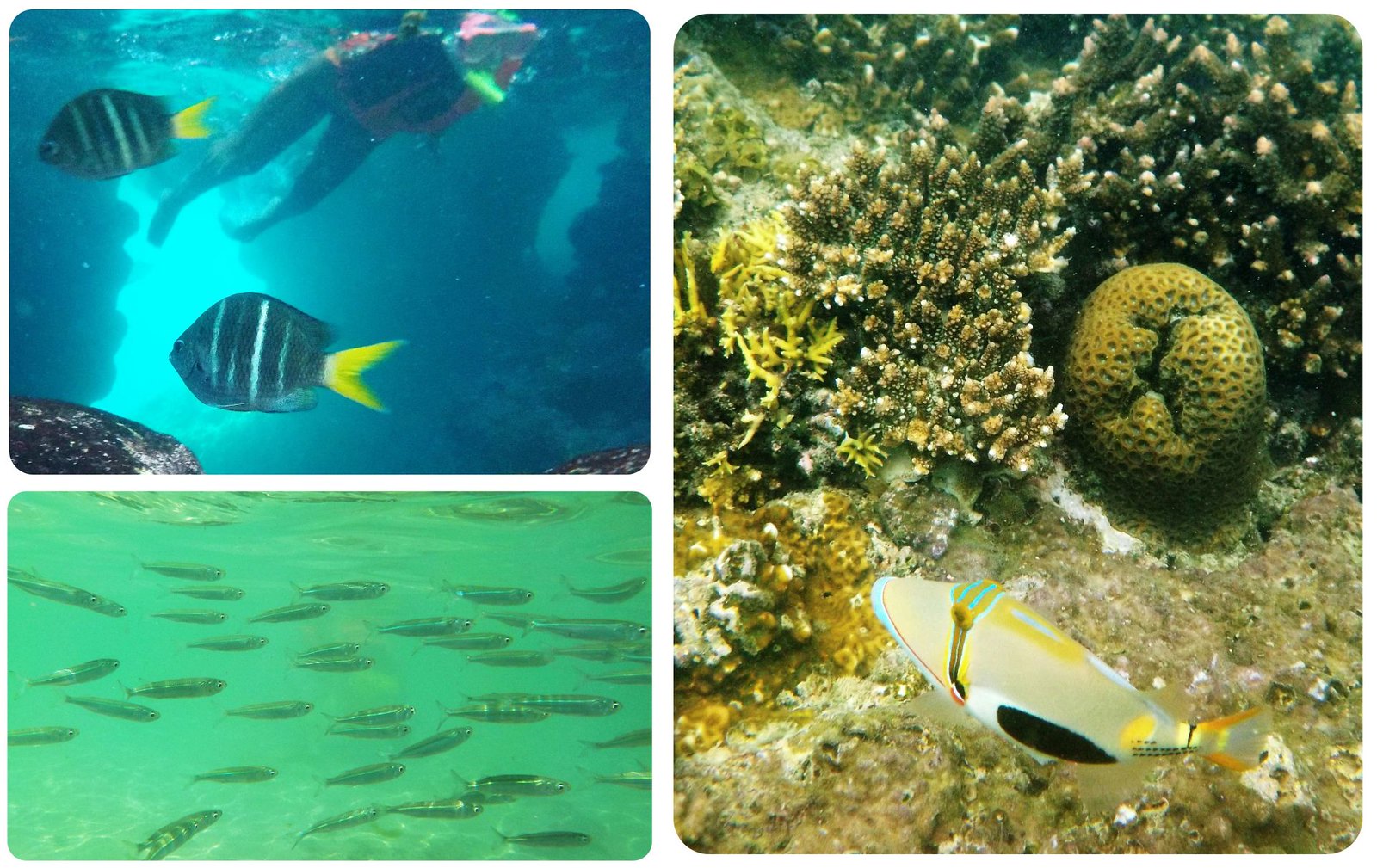 I’d calculate 200 pesos for a cheap meal and 400 pesos for a pricier meal (pizza and a beer came to 420 pesos, breakfast usually cost me around 250 pesos in El Nido). The food available in the little stores around town was very limited, if you’re planning to self-cater.

Have you been to El Nido? Feel free to add any tips you might have (including decent places to stay!) in the comments below! 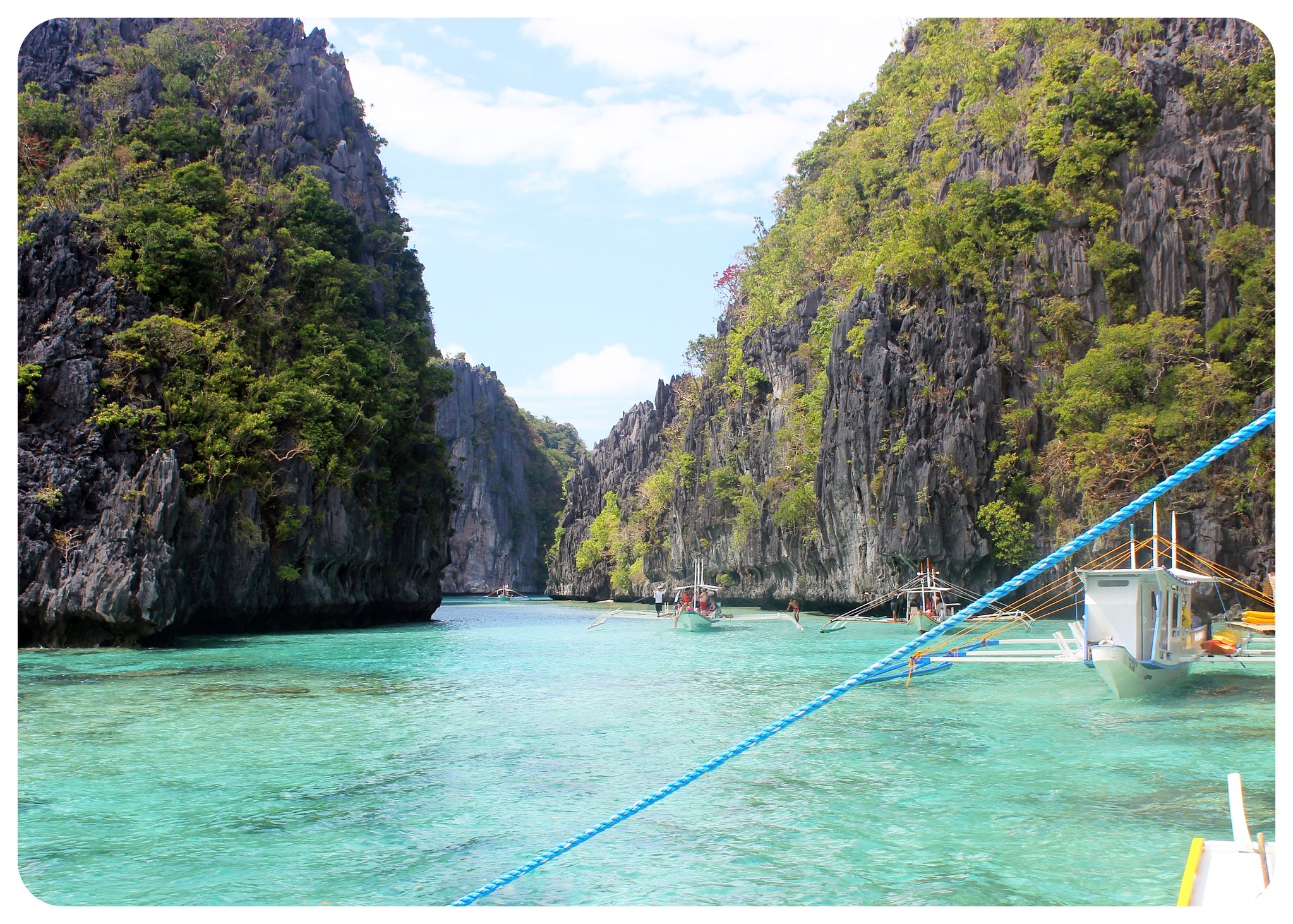