This month didn’t go as planned – I wasn’t allowed to travel to Indonesia, spent more time in Thailand than I had originally planned, and unexpectedly found myself in Cambodia! Let’s start with the good, before we get to the bad and the ugly.

I started the month traveling with someone and am finishing the month traveling with someone – and was supposed to travel with another friend in between, but that didn’t happen. More on that whole fiasco in a bit. The best part of the month was playing tour guide and showing off some of my favorite places in Thailand. I love showing people how easy and inexpensive independent travel can be and this trip was no different. Almost everything was smooth sailing, except for a horrible case of food poisoning in Bangkok that knocked me out for more than one entire day.

I started the month in Chiang Mai, moved on to Bangkok where I ended up being stuck for over a week, followed by a whirlwind tour of my favorite places in Cambodia (Siem Reap, Phnom Penh, Kampot, Otres Beach), and returned to Bangkok via Koh Chang, an island that I’ve been meaning to check out for a while. I stayed in Lonely Beach in Koh Chang (which turned out to be anything but lonely!) and loved my days on the island, making me wish I would’ve had more time there, but my friend was waiting to be picked up at the airport in Bangkok. I’ll be back to explore more of Koh Chang for sure. Returning to Cambodia was such a treat – I had been skeptical if I would still love it as much as I did the first time around, but I had nothing to worry about. My deep love for Cambodia was the same, and I might even have fallen more in love with the country during this visit, if that’s possible at all. 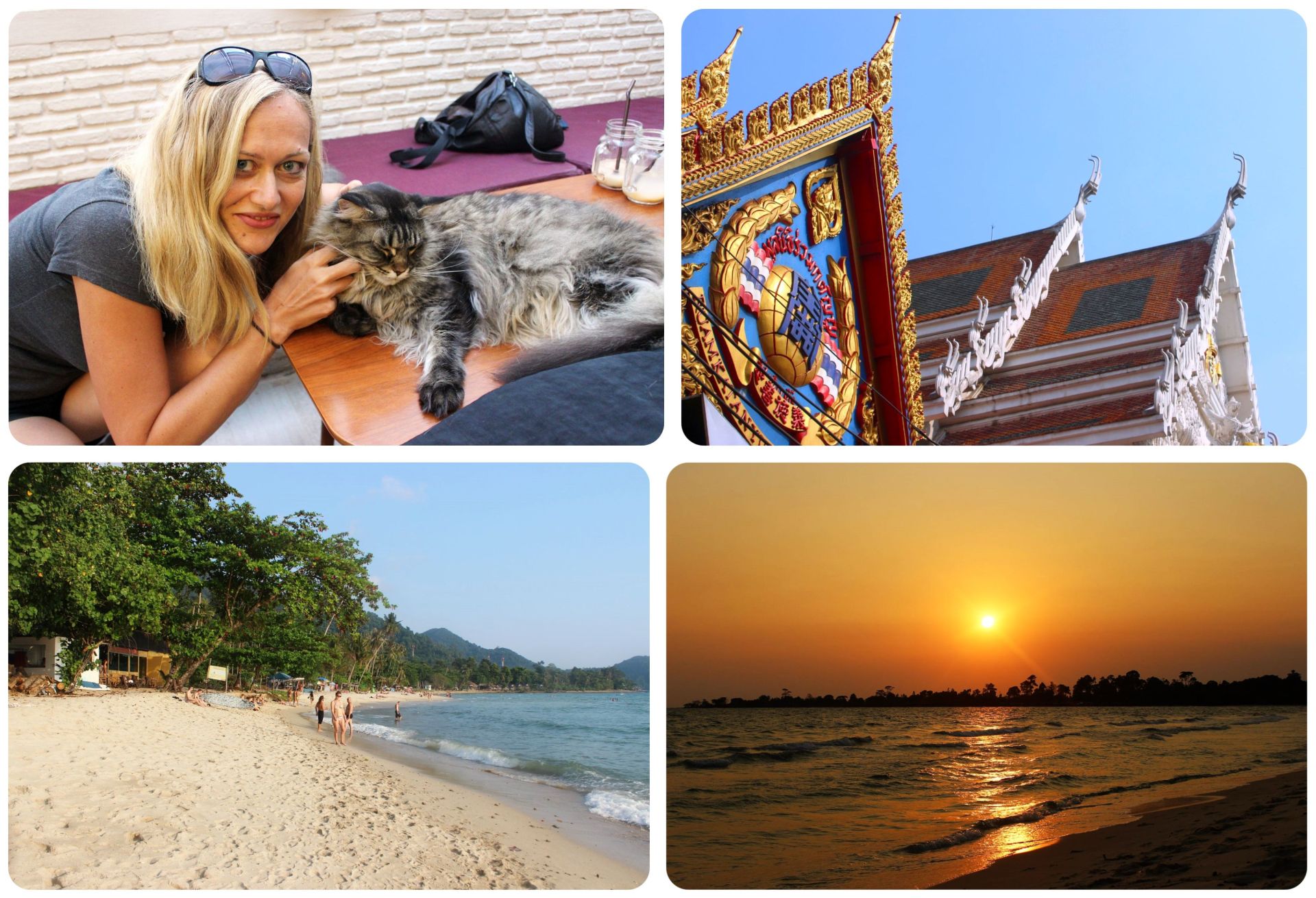 Work & travel balance
Even though I traveled A LOT this month, I got a huge amount of work done. Whenever I was in transit, I used the time to write, no matter if I was on a bus, ferry, plane, or minivan.

Making time to relax
I’ve had the hardest time over the past few months allowing myself to relax. I kept going, going, going or working till late into the night – this month I actually managed to read book and allowed myself some beach time. It felt glorious. 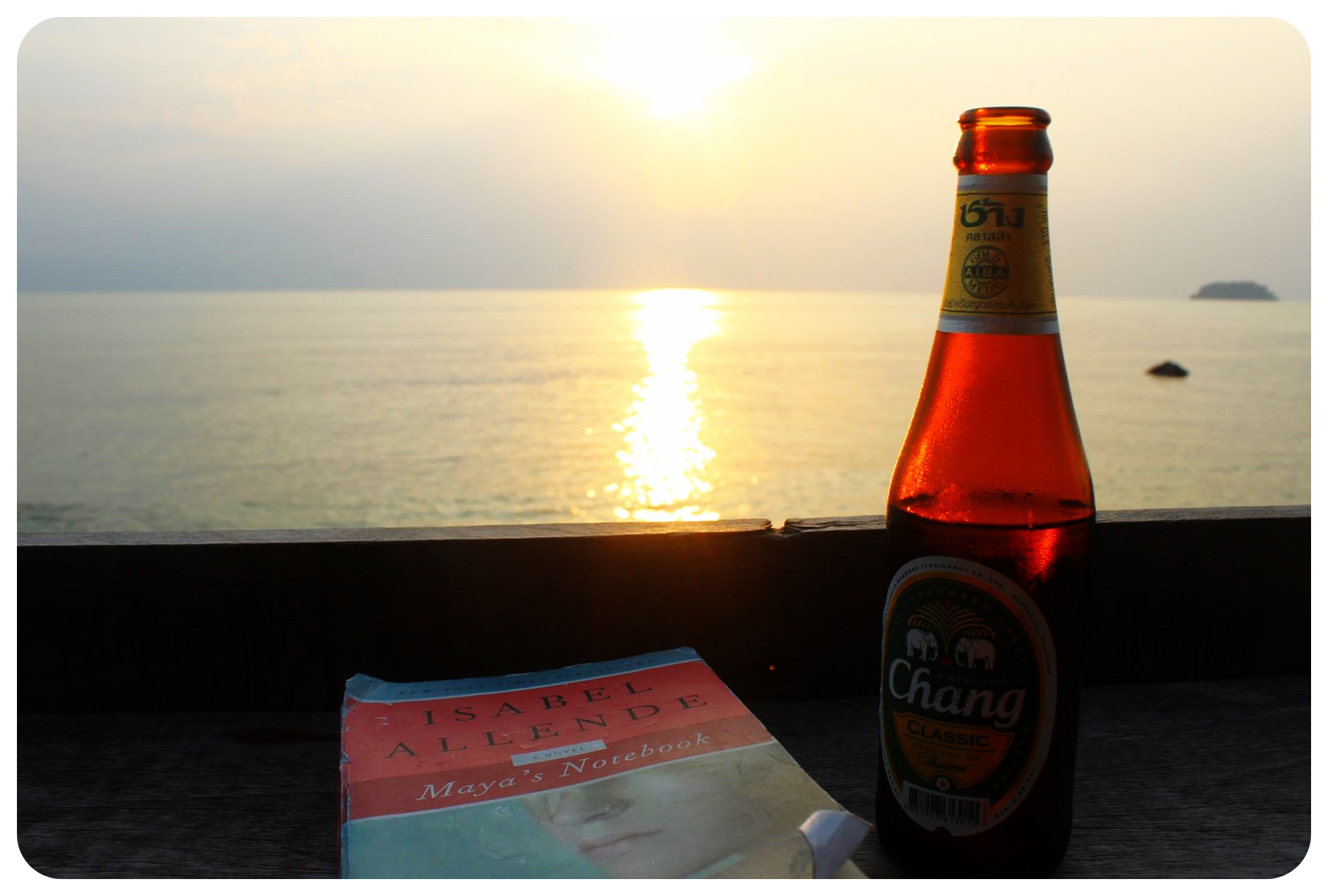 Revisiting Cambodia
As I already said – I loved being back in Cambodia, despite not having any plans to go there in the first place. I don’t think I could’ve chosen a better place to get over the debacle that kept me from going to Indonesia. And after spending a couple of weeks in Cambodia, I can only say that it still is one of my favorite countries in the world and I found myself walking around with a big smile on my face every single day there. I didn’t do much except for wandering the towns I stopped at, had good food, cycled through the countryside and visited the PHARE Circus in Siem Reap (pictured below), a wonderful non-profit organization that helps local artists to develop successful circus careers. I’ll be writing more about Phare shortly. 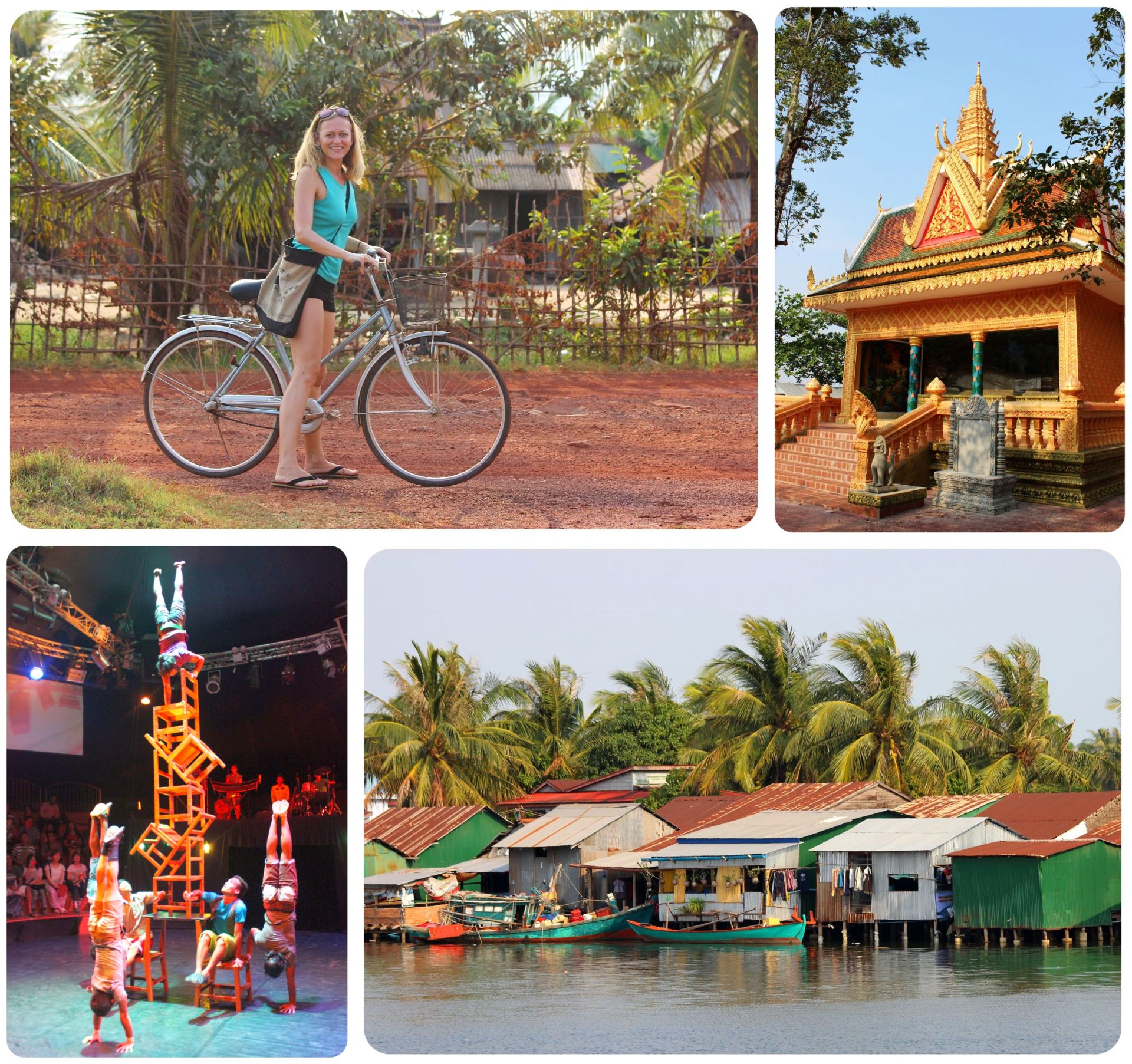 Not visiting Indonesia
My biggest travel fail in years. And I was supposed to meet a good friend there to celebrate her birthday together (she’d flown all the way from Germany to spend her vacation with me) – I still feel horrible for standing her up.

Why did I not go?

The passport fiasco
I was at the AirAsia check-in desk at Don Mueang Airport in Bangkok, ready to check in for my flight to Denpasar, Bali. I didn’t even realize at first that the clerk had cancelled my ticket after saying ‘Indonesia might not let you in. Passport damaged’. But when he handed me a receipt which stated my flight details and had ‘cancelled’ handwritten in large letters on it, it began to dawn on me that he was for real. ‘No!’, I yelled at him, ‘I have to get on this plane! Someone’s waiting for me in Indonesia!’ All I got from him was a stern look and the request to move out of the way so that the next customer could proceed. Long story short- after a frustrating talk with the supervisor, Thai immigration inspecting the state of my passport and some shed tears, I was on my way to the German embassy to have my passport replaced, which means in my case a temporary passport that makes it incredibly difficult to travel around, since it is not biometric. I have to apply for a visa for pretty much any place I’d like to travel to. Even if my friend would have been in Bali longer I wouldn’t have made it there in time to see her, and so my Indonesia plans are put on hold for now.

Let’s talk about my passport for a minute: yes, it is probably more used than after passports, after nearly five years of traveling full-time with me, but I also want to point out that I’d taken 13 flights this year already, including in Europe, and was never told that my passport might be an issue to enter a country. As soon as I get my new passport though I will buy a passport holder, that’s for sure. (You’d do the same after being yelled at by a German government official for being careless with an official travel document, trust me.)

Food poisoning
This was the third time on my travels that I didn’t get food poisoning from a dodgy street food cart but from a fancy establishment! This time it happened at the Grand Central VIP movie theater, where 700 baht buy you not only a movie ticket for a smaller, more intimate movie theater with reclining seats, blankets and waiting service throughout the movie (unlimited refills on popcorn and soft drinks), but also access to a fancy lounge with a buffet 1 hour before the movie starts. In theory, the perfect way to spoil yourself after touring Thailand and before a day of exploring Ayutthaya – in reality though, for me the day ended over the toilet, throwing up all the food I had at the buffet, and with a seriously upset stomach. Cycling around the ruins of Ayutthaya the next day? Unthinkable.

Power-less in Cambodia
Picture this: you are in a sweltering heat of 100F /38C, and the only reason you survive is thanks to the air conditioned cafes around town. The power goes out. No air conditioning, no fans, nothing. That’s what happened to me in Siem Reap, just as I was about to eat dinner. It turned out to be the sweatiest meal of my life – my clothes were soaking wet by the time I finished my meal. Luckily I found a restaurant with a generator so that they could run their fans but once they closed, I had to return to my hotel which was still without power. So were my laptop, iPod and iPhone. The room was like a sauna. The entire street was pitch black. Just as I was about to die (no, I am not being overly dramatic here at all), the power came back on. ‘Welcome to the third world’, read the text my friend Carla sent me in reply to me outlining the misery I had gone through the previous night.

Drama in Bangkok
After an embarrassing breakdown in Bangkok at the beginning of the month (we’re talking about a full-on drama scene in front of hotel staff, other guests and my temporary globetrottergirl) because of another WiFi incident and a consequently nearly missed deadline for a freelance article I was ready to give up this nomadic life. I couldn’t understand how I ended up in a hotel where the WiFi didn’t work again (the same happened last month!) – in no less than three different rooms, and in Bangkok of all places. Clearly, some higher power was telling me that this whole digital nomad life wasn’t for me?

From the aforementioned incident I can only say: my own fault for waiting until the very last minute to submit my article. Don’t wait until the very end to deliver on work commitments. You might think I would have learned that by now, but clearly, I always need some sort of drama in my life.

From the passport fiasco: take better care of my passport, obviously. While I might not care about what condition it is in, the immigration officials in this world do.

Don’t travel on a tourist shuttle
I don’t even know why I booked a direct transfer from Sihanoukville, Cambodia to Koh Chang, Thailand. I’ve not used a single tourist shuttle since I got to Asia, always traveling independently from place to place, using public transportation. I ended up taking twice as long and paid nearly double of what it would have cost me to organize my own transportation, and ended up still changing from a bus at the border into a minivan into a shared pickup truck onto a ferry into a taxi – exactly what I would’ve done independently, but as I said, for half the money and without hour-long waits for the vans to fill up.

I thought I should include this category this month because traveling with other people has had me teach them a few lessons actually, including:

Another month, another visitor! My friend was dying to spend her birthday on a beach, so why not come and see me in Thailand, right? ☺️

I am spending another ten days in Thailand before my Asia stint comes to full circle in Hong Kong mid-April. I am getting ready for my return to the U.S. which I’ve already hinted on in this article last month, but since I’m still in the planning stages of my exact whereabouts for the first few weeks (guess what – it’s NOT New York!), I’ll wait till next month to share the details with you. Now I only have to keep my fingers crossed for my new passport to be ready in time for me to catch my flight – I have about ten days in Germany at the end of April to apply for a new passport, have the details on my plane ticket changed (it was issued to my old passport number) and get a new ESTA visa waiver. Wish me luck that I’ll be sending my next update as I am on my way to the U.S.!

9 Amazing Cities And Towns You Should Visit During Your Lifetime