Throughout these New Mexico posts, I can see us making the same point over and over:

There is so much more to see and do in New Mexico than you would ever expect. The best part is that when you travel here, it feels like you have the place almost entirely to yourself.

Take the Gila Cliff Dwellings for example. Located 45 miles from the charming copper mining town of Silver City, the ancient ruins of the Mongollon people in this remote wilderness are fascinating, yet there was only one other couple there during our visit. And Silver City itself charmed us far more than we ever imagined. 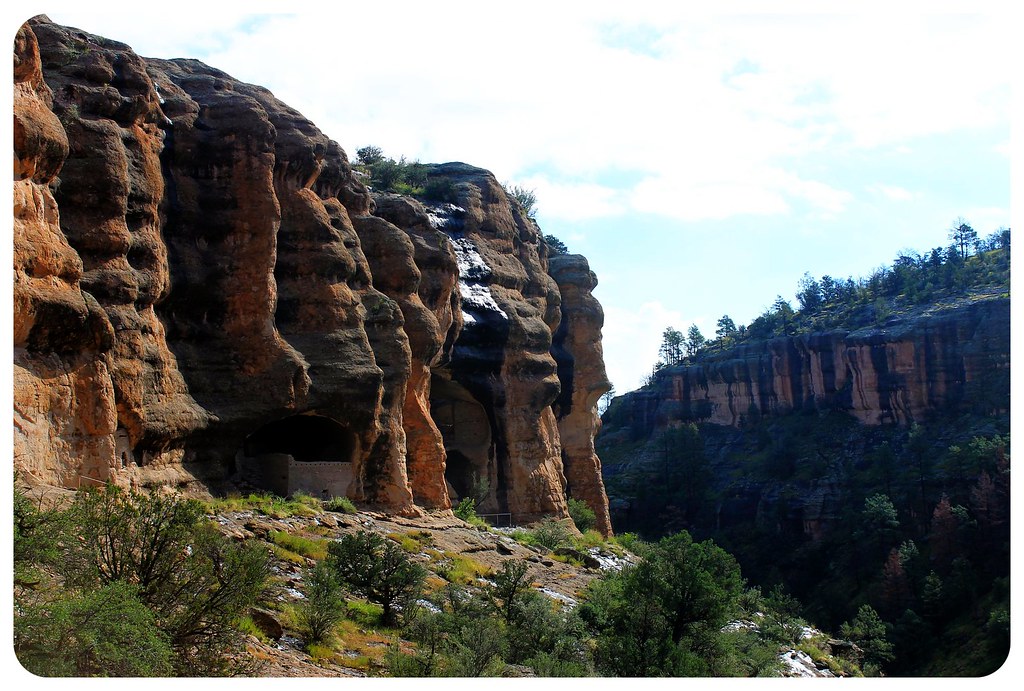 According to this New York Times article, the people of Silver City consider their 10,000 strong town to be the ‘real New Mexico’.

Despite our short stay here, we felt that authenticity right away. In fact, we had only planned to use Silver City as our base to visit the national park, but ended up wishing we could stay another day. 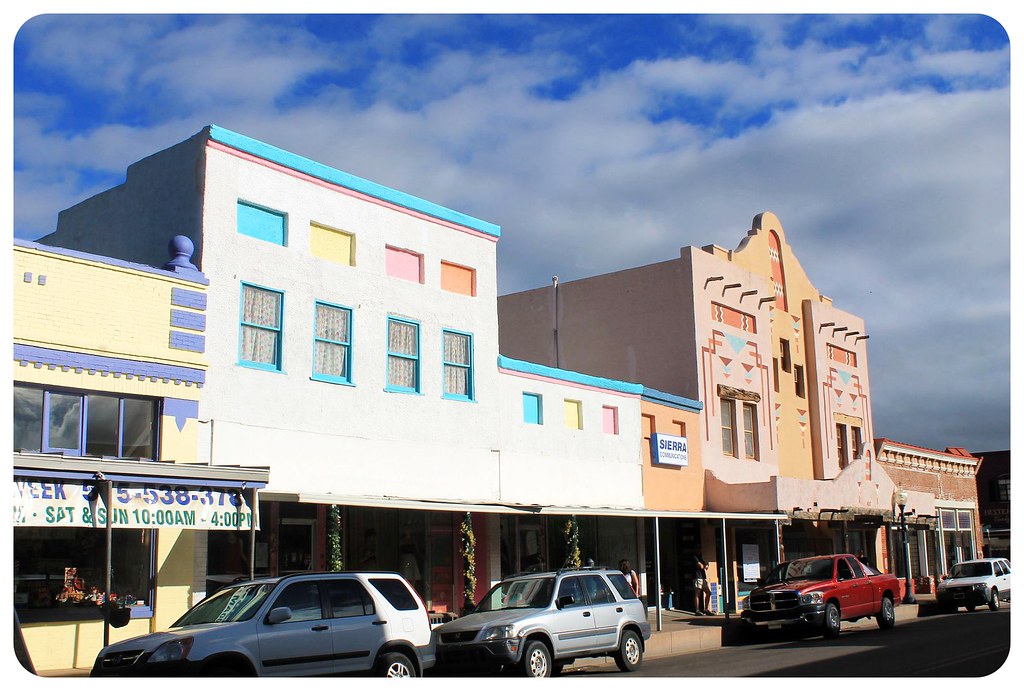 First settled as a silver mining town in 1870, by the time the industry went bust in 1893, Silver City had already started to become a place of refuge for tuberculosis patients for some of the very same reasons it attracts tourists today: it’s dry, desert air and surrounding hot springs. Less than two decades later, Silver City became a copper mining town, which continues to be the basis for its economy today.

The small town feel, the grand Victorian mansions and tiny, pueblo style houses all intermingle in the blocks around Bullard St, the main drag. We parked right out front the sprawling Javalina Coffee House, and spent an hour sunk into two huge chairs in the perfectly cozy cafe with great coffee and a late 90s feel.

At 4pm, cowboys and bikers were already standing outside the Buffalo Bar, smoking what I only imagine to have been Marlboro Reds and admiring the Harleys lined up neatly out front. The scene was just like out of a movie, and had a camera crew suddenly appeared and a director yelled ‘Cut!’ neither of us would have been surprised. 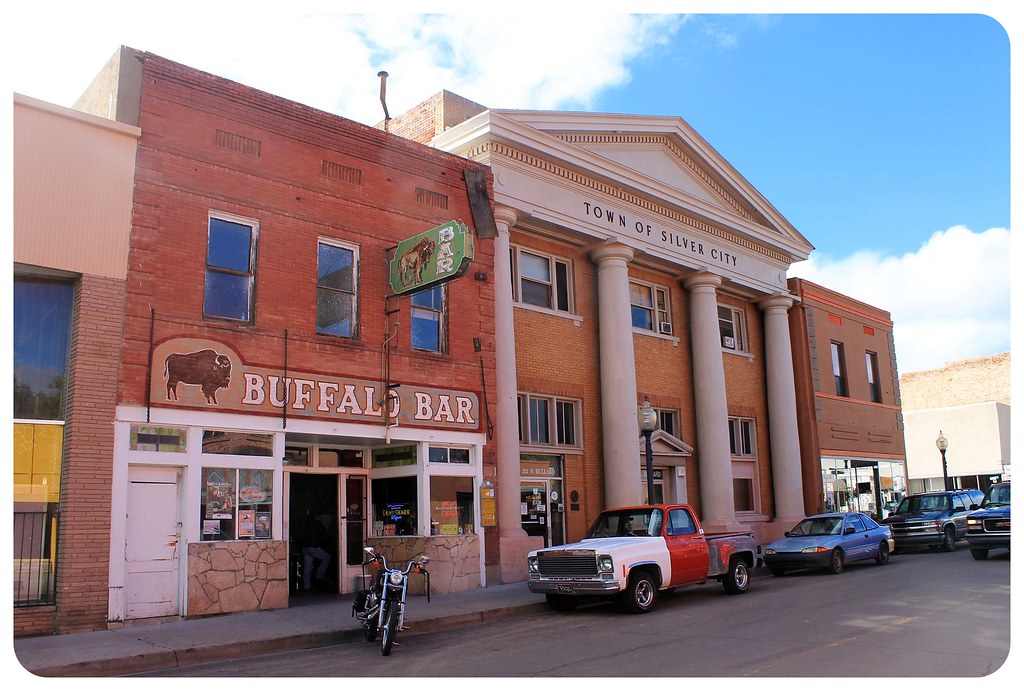 In order to soak up as much of Silver City as possible, we spent the late afternoon strolling up and down the colorful Bullard Street, popping into bookshops, antique stores, art galleries, mom-n-pop shops and peeking at menus of the local restaurants and were impressed by the varied, creative and healthy options available. With an extra day, we may have eaten at Diane’s Restaurant for local and American fare or the Curious Kumquat, which serves up locally foraged food.

Dinner at Jalisco’s was the perfect first dinner in New Mexico. Completely packed with locals, the diners and waiters all seemed to know each other, but we also felt right at home eating big plates of New Mexican comfort food.

The next morning we left our classic road trip motel and stopped in for a 7am breakfast of huevos rancheros at Nancy’s Silver Cafe on Bullard St to fill up for our drive out to the cliff dwellings. 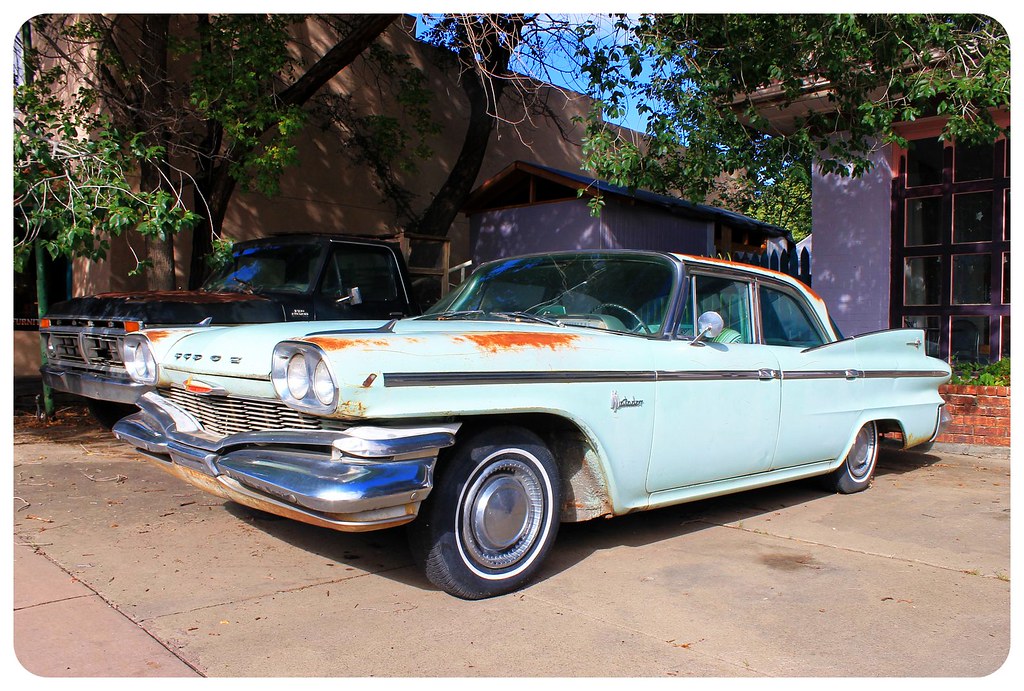 And onward to the Gila Wilderness!

Google Maps will estimate the 45-mile trip at 1hr 15min, but the sign just outside of town on Highway NM15 that says it takes two hours is telling you the truth. The road’s sharp twists and turns kept us under 20mph for much of the journey. It is impossible to rush it, but the fact that the drive itself is so gorgeous means you don’t want to anyway. 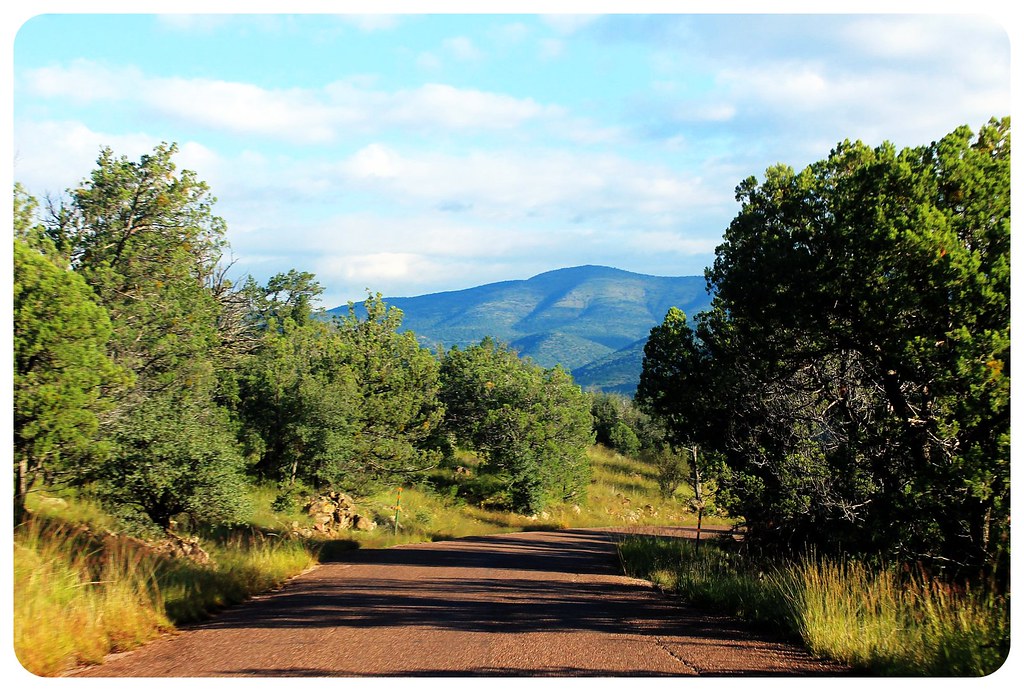 We drove down into canyons, up over ridges, across miles and miles of national forest and remote wilderness and made sure to stop off in Pinos Altos, seven miles north of Silver City for a quick walk around Main Street. If you have time, eat at the Buckhorn Saloon, a bar and restaurant built in 1865. This dark, wooden building with its smoky fireplaces and crystal chandeliers is noted for its excellent food, and for transporting you back in time to the frontier days. 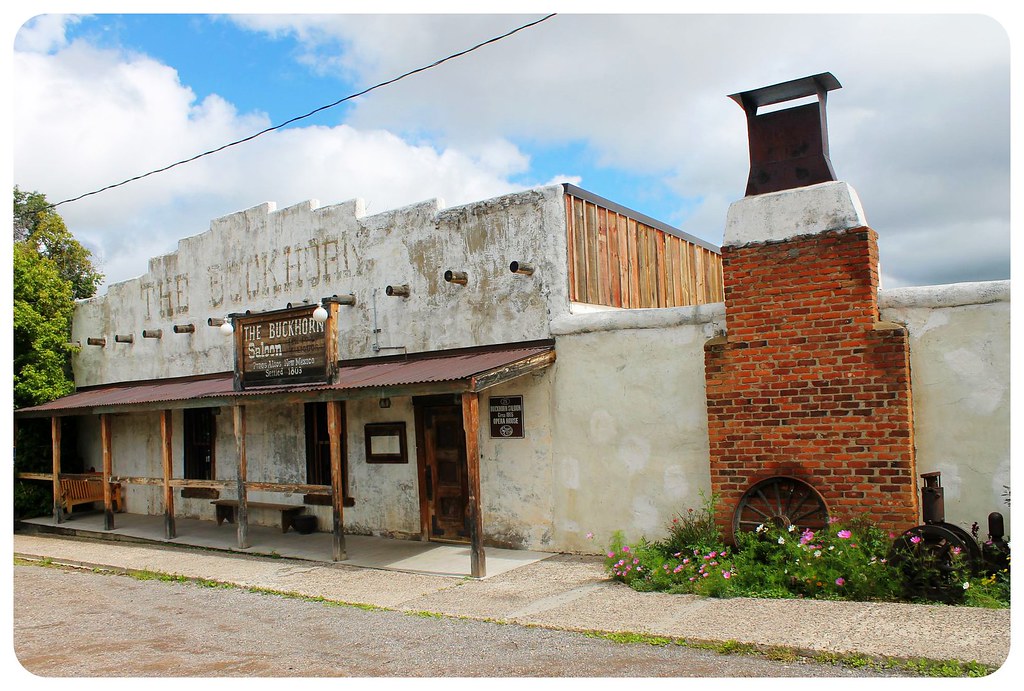 Having come up from Tucson, at points not far from the US-Mexico border, we had seen dry, harsh desert for much of the trip to Silver City, so we were surprised at just how rich and dense the forest was here. There were beautiful pine trees, high grasses, yellow butterflies everywhere you turned your head. That’s just the thing about New Mexico – the landscape is always changing and is much more lush in places than you would expect.

After two hours, we finally made it to the Cliff Dwellings. Built high up in a series of five caves, it is estimated that 60 people from the Mongollon culture built their village here, though it is unknown exactly why they were only based here for roughly 30 years. 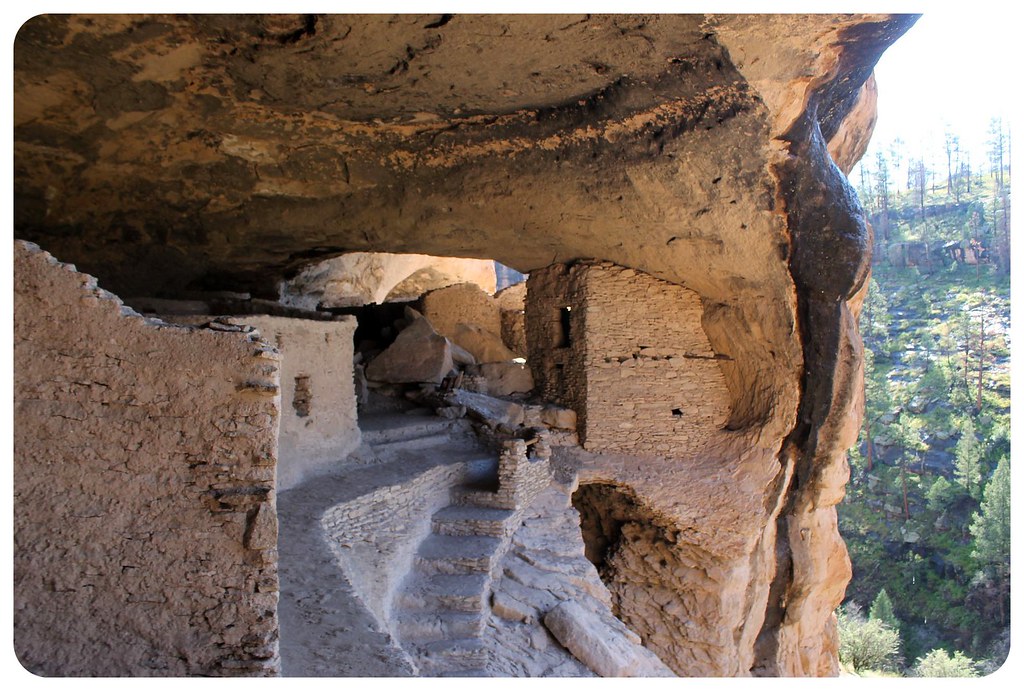 We paid our $3 each and set off onto the one-mile circular loop. The site is quite small and you can do the walk and visit the five interlinking cave dwellings in about an hour, or a little faster if you, like us, think you see an actual Gila monster. We may have made a loud, screaming run for it at a certain point, but it turns out that these poisonous but incredibly slow moving creatures are not even native to this part of New Mexico, despite being used as the name of both the cliffs and the wilderness. Who knew? 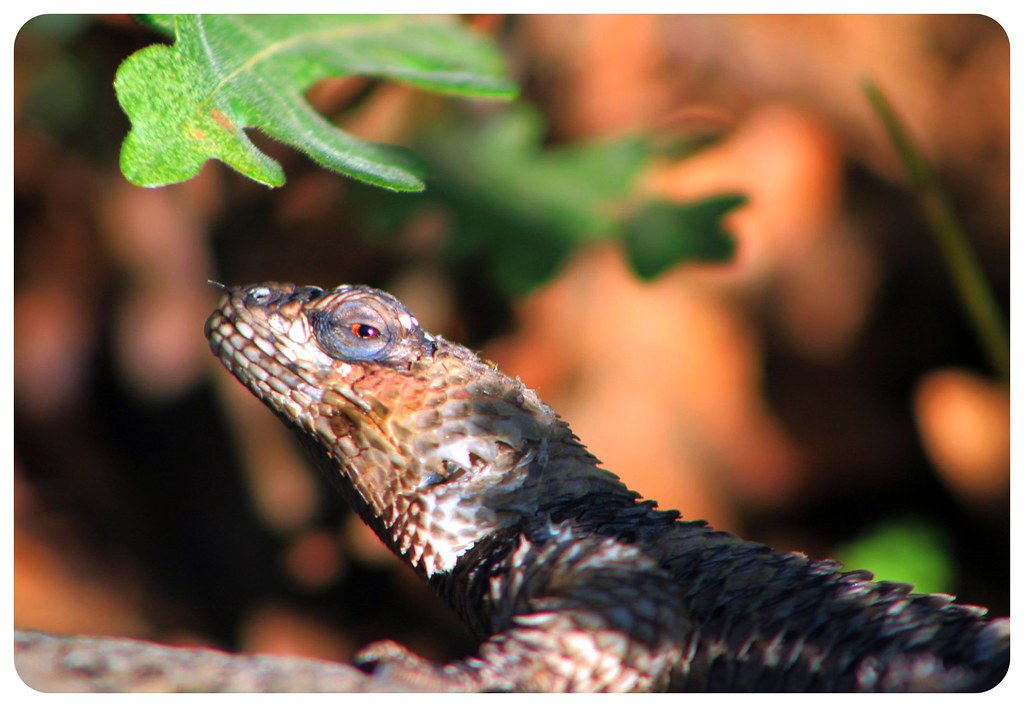 The caves are in such incredible condition that we could clearly imagine what life would have been like and it was surprising just how far back some of the spaces reached. The park ranger stationed here took us around and explained what each room would have been used for: the open space the size of a football field in the back where children would have played, the kitchens, common areas and bedrooms where families would have slept. 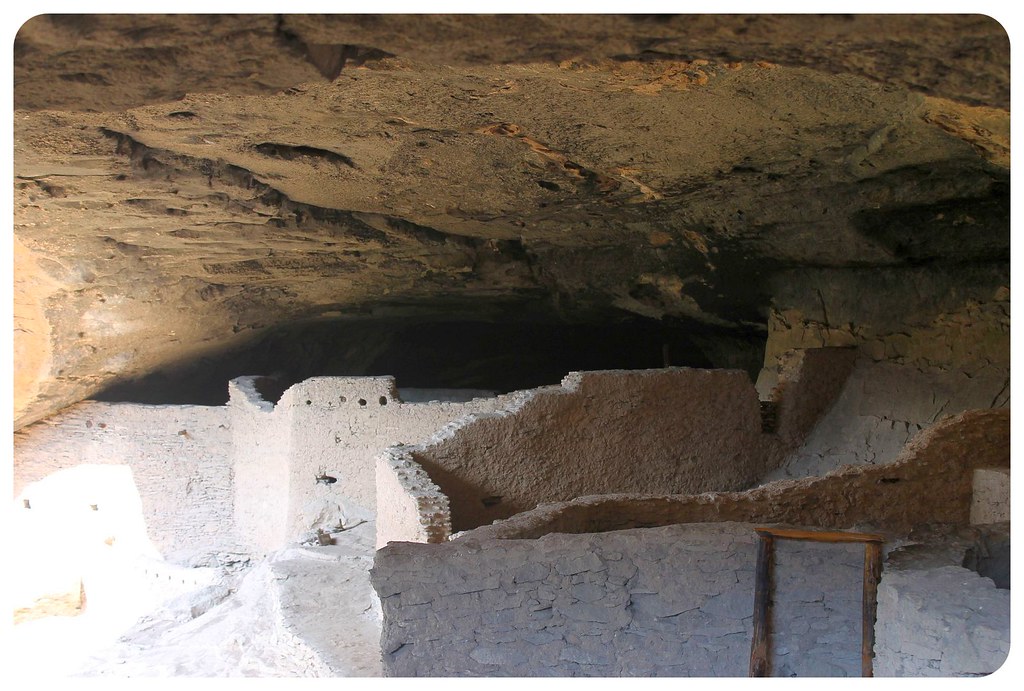 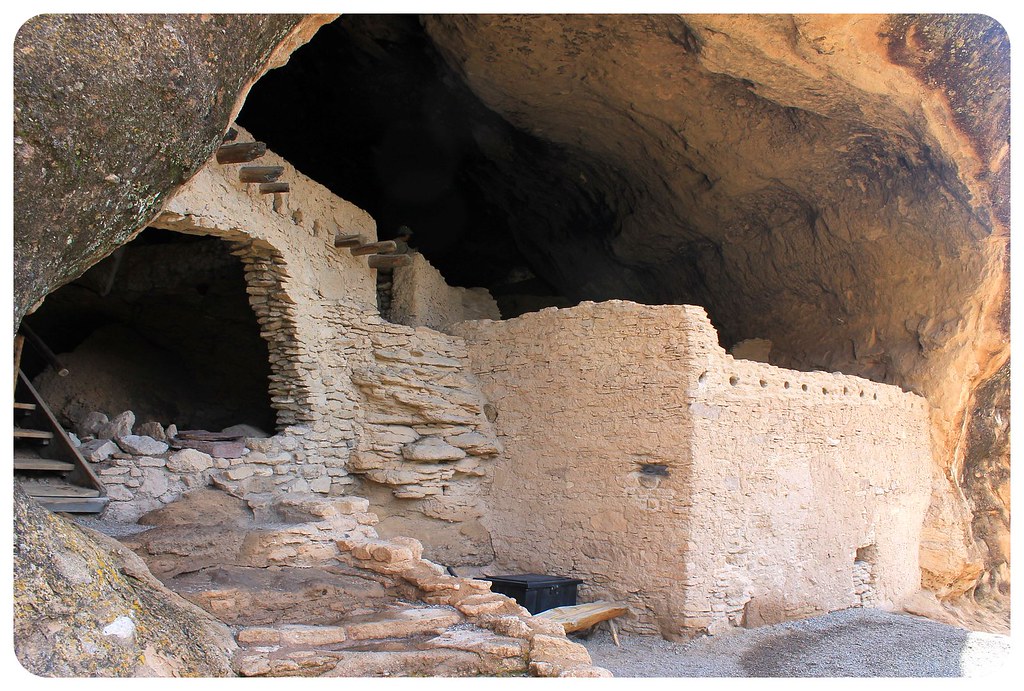 The location was nearly perfect – set on the river bank, the community had access to water, hunted the animals who drank from the river and planted 34 species of plants and herbs right down below the cliff dwellings themselves. 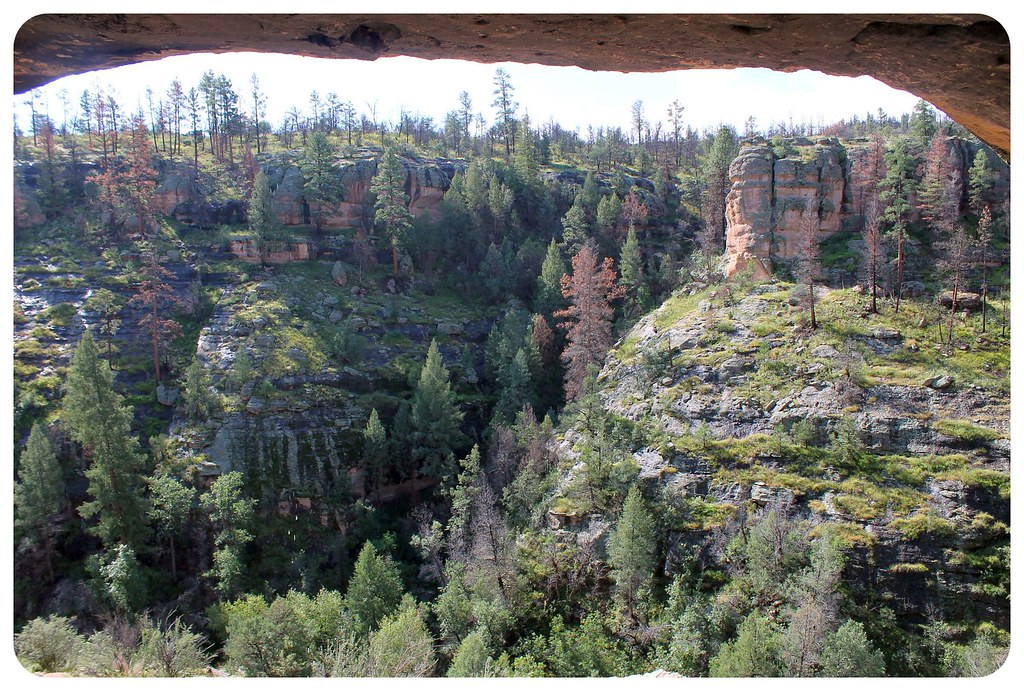 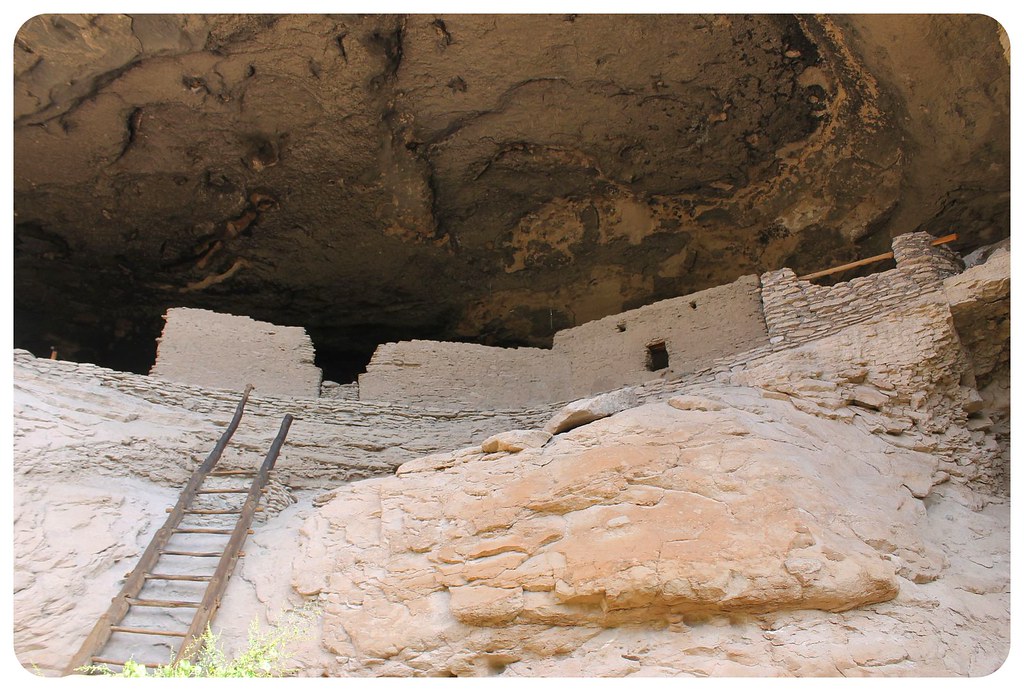 As I descended the final ladder, I took in the scents of fresh mint, lavender and other herbs. There was something really special about knowing these were roughly the same smells that Mongollon mothers and grandmothers would also have been smelling back in 1275AD while picking their herbs each day. That connection brought the cliff dwellings to life for me in a much more real way than just climbing up and around inside them alone would have. 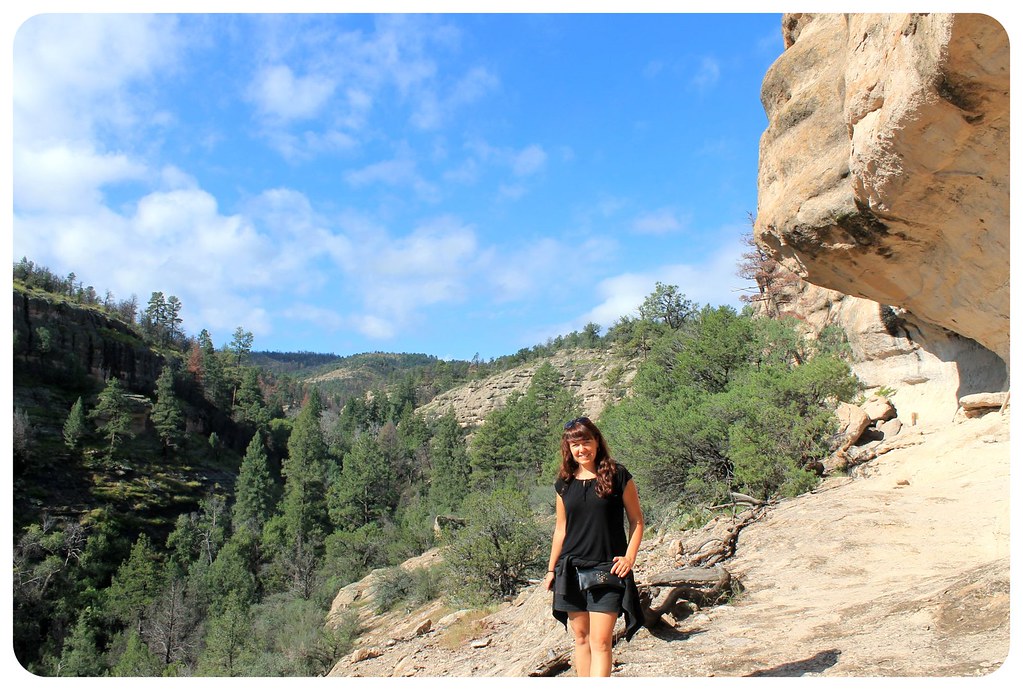 After your visit, there are other, smaller ancient sites, trails, hot springs and fishing along the Gila River, so you can make a whole day out of the visit. We stopped at a few impressive viewpoints, but were keen to make the two hour trek back out through Silver City and on to our next stop that afternoon. 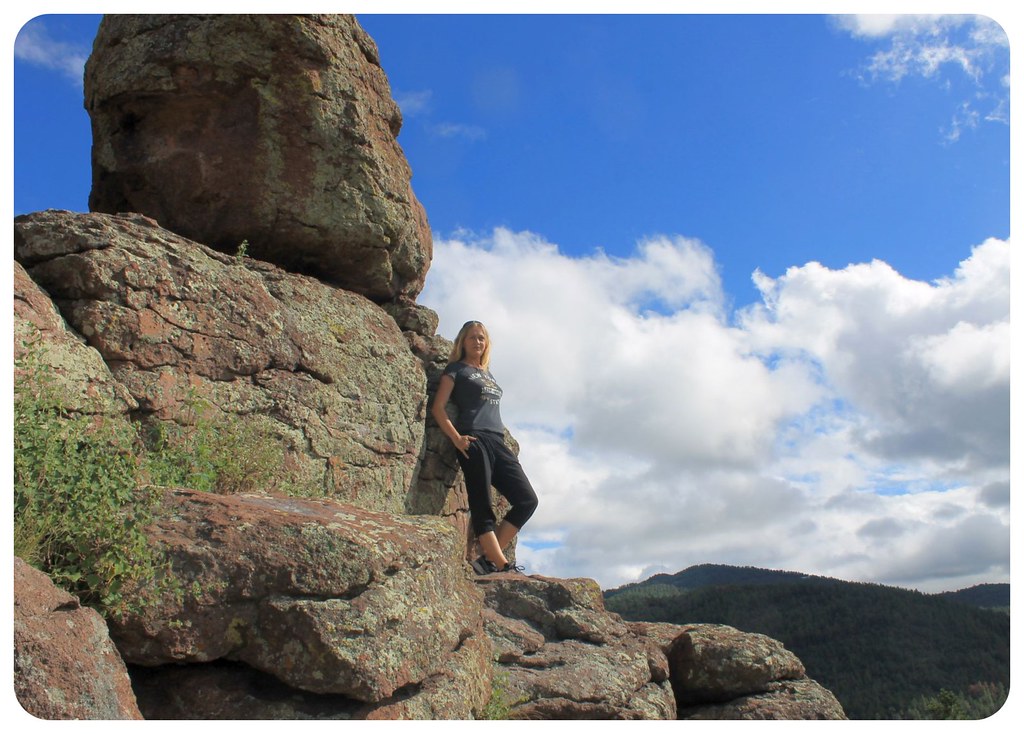 Getting to the Gila Cliff Dwellings

From Silver City, the NM15 leads you north to the mountains, winding its way through mountains and through a thick forest. You’ll hit the NM35 but continue along the NM15 all the way to the parking area that is another two miles past the National Monument Visitor Center. For those driving a camper or RV, you’ll need to arrive via the NM35, as the route from Silver City would be nearly impossible with a large vehicle. There is camping within the Gila Wilderness. 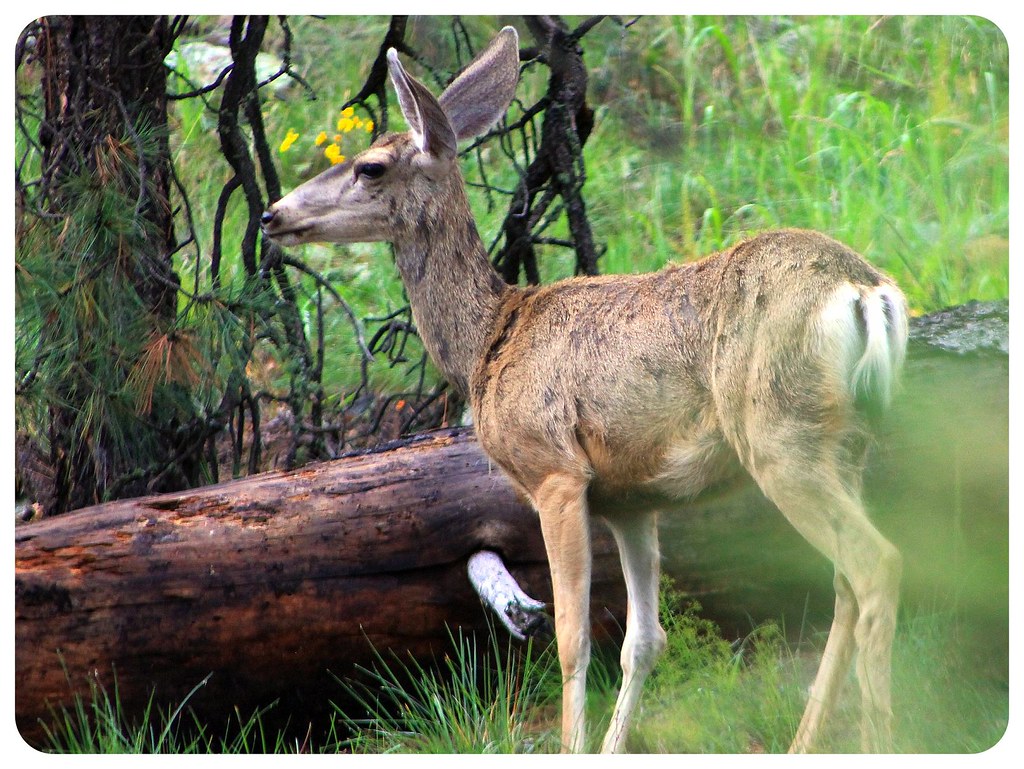 Check out our image gallery for more photos of the Gila Cliff Dwellings, Silver City and the Gila Wilderness: 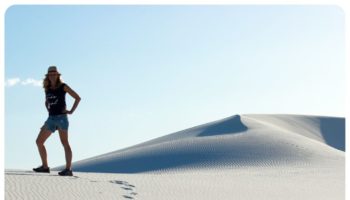