Before Dani and I moved to London in 2007, I lived in Brighton, right on the beach front King’s Road, for one full year (and even interned at VisitBrighton for the spring semester – my first job in tourism!) Seaside towns and cities are often associated with the summer months but I would definitely recommend getting trains to Brighton in the winter, too. You can squeeze quite a bit into one day, but stay the weekend. For even better prices, consider a mid-week break if at all possible. Brighton might be on the sea, and the temperatures in southern England stay above zero most of the winter, but you still want to look for indoor options along with a few invigorating outdoor options as well. Read on for our recommendations on what to do in Brighton in the winter.

This distinctive structure sets Brighton apart from other British seaside towns. The Royal Pavilion is a Brighton icon and arguably one of the most unusual buildings in the UK, both outside and in. It was originally constructed as a seaside holiday home for the flamboyant Prince Regent, who had the structure built according to how he imagined Indian temples to look – though he had never been to India himself. Brighton has always been an alternative place, and this gorgeous, but unusual Pavilion, represents all of that energy that is still flowing through the city.

Today you can take tours and learn about the extravagance of the place, including underground escape tunnels and other little known details.  It has its very own tearoom, which could be the perfect spot to have a drink or a bite to eat and there’s currently an ice rink too, which makes for a quintessentially Brighton backdrop.

If anything, this will most certainly get you into the spirit of Christmas! The Brighton Toy and Model Museum is well worth a visit to take in some of the things children used to play with in years gone by. Visitors from England get a kick out of this blast from the past, but it was fascinating for me to catch a glimpse at how different the games that kids had there growing up versus in the US where I grew up. Games from  famous manufacturers like Meccano, Hornby and Dinky that I had never heard of before! For those with train tickets to Brighton (and who would drive anyway, with the train only a 55-minute ride from Victoria station) this museum could be your first or last stop in Brighton, as it is located in the arches under the station’s forecourt.

From the train station, head straight down to the water along the Queen’s Road, and you will see Brighton Pier to your left and West Pier to your right. Today the two could not look more different. Brighton Pier is a historic Grade II listed pier boasting thrill rides like the Turbo Coaster, traditional fish and chips shops and kiosks for snacks and sweets. On a sunny winter’s day, walking all the way out to the end of the pier and taking in the bracing wind and salty air can be really refreshing – and work up quite an appetite, too! You can only walk out on this pier, as the West Pier is off-limits and has been for decades before it caught fire and burned almost completely in 2003. Today, it’s crisp skeleton sits proudly in the water, not as a scar but as a part of Brighton history. Several development plans are in the works, the most notable is the i360, a 600ft observation tower that has been in the planning stages since roughly 2008 and is said to possibly open in 2015. 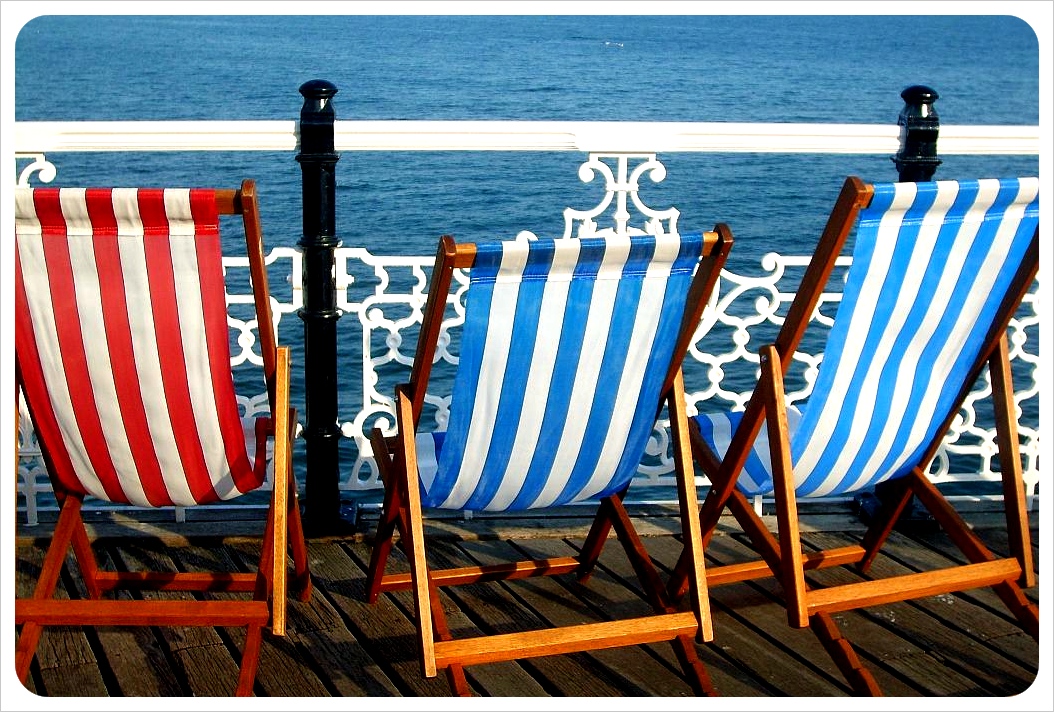 You can spend hours, days even, wandering through the Lanes morning, noon and night. You can have breakfast in the dozens of cute cafes, which will of course also serve you delicious coffee and cake in the afternoons. You can have a pub grub lunch or dinner (or both), have typical afternoon tea, buy loads of unnecessary tourist trinkets, shop in resale shops, buy diamond rings, take day tours, night tours, ghost tours, you name it and it’s in the Lanes, a twisty turny patch of dozens of little lanes right off the sea front and Brighton Pier. Winter is actually such a great time to visit the Lanes, despite the cold. Nowhere else in the city evokes such a feeling of Christmas tradition and cheer, and there are places to warm up with tea, coffee, wine and spirits around every twisty corner!

You know, come to think of it, I think we might want to join you in Brighton this winter -it’s time to visit a place I once called home!!

What Does Travel Insurance Actually Cover?