Spending time in Europe is like unraveling an endless ball of string. So many places, so little time and all the plans we make get tangled up in each other. In a word, we want to go everywhere!

This time around we focused on Berlin and getting to know the new additions to our family. We now have a new baby niece, a niece who is now a toddler and therefore old enough to really remember us and what we now know is a nephew in Dani’s sister’s belly.

What these new additions to our family mean is that we will be spending more and more time in Europe in the coming years but even when we base ourselves somewhere for a few months, we will need to hop away for quick trips. We don’t get to take little side trips very often as we do long trips across several countries usually over several months. Normally, we don’t do package holidays, but a good option we would consider with a base in Europe would be to see what cancellation holidays are on offer. This is basically like flying standby, but for the whole vacation. Essentially this means that if for some reason some other poor souls have to cancel their package, you can jump in and purchase it just a few days before the trip at a fraction of the original price.

Our top five European escapes include Rome, Istanbul, Portugal’s Algarve, Montenegro and Croatia. We would ideally like to live for months at a time in all of these, and taking quick trips to each first would be a good way to check out which ones we want to spend longer periods of time in first.

Rome is a place that neither of us can believe we have never visited together. Dani has been to Rome several times, but never with me and the one time we almost made it – during our Mediterranean cruise in 2011 – there was a train strike and thousands of people sat on the tracks between our port and Rome. Our recent stay in Berlin was only five weeks which was far too short, as were eight weeks in New York, but we think 6-8 weeks in Rome would be just about right for our stay there.

In Istanbul, we would stay for a month and eat baklava every day until we make ourselves sick! We have looked at apartment properties several times before and know that we can get a good long-term deal. This was a major consideration this summer, too, but we opted for Germany instead. We might finally get to spend a month in Istanbul next year!

Any avid reader of our site knows that Dani and I love love loved Lisbon, so it goes without say we’d spend more time in this country in a heartbeat. We have been talking about finding a villa possibly with a few other long-term traveling couples for a month or so and living on the gorgeous beaches of the Algarve on the southern coast of Portugal.

Montenegro is entirely under-hyped as far as we are concerned, and everyone who travels there raves about the beaches, lakes and mountains of this small country. We almost don’t want too many people to start considering this as a destination so it remains one of Europe’s few hidden gems, but that’s why more than ever we know we need to spend a month here in the next few years, without a doubt.

Croatia is one of those places that has become so popular it now almost seems like an obvious European destination, but we have yet to spend some time here either and this has to happen soon! It is possible that we could follow a month in Montenegro with a month in Croatia before hopping to Rome… We’d love to spend a few weeks hopping from town to town on the Adriatic Coast soaking in the country’s stunning coastline.

Here goes that ball of string thinking again! But the most exciting thing about this lifestyle is that even when we decided to have a semi-base, there are endless trips to be made just in Europe alone as well.

Which places would make your bucket list for a longer stint in Europe? 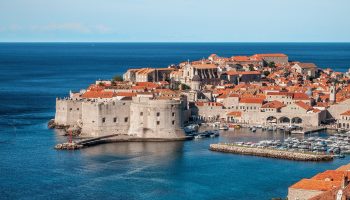