We spend nearly twenty-four hours a day seven days a week traveling together and share a whole host of things in common, but we definitely don’t always see eye to eye on everything. Instead of merging our opinions into one, we’re starting a new series, She Said, She Said, where we both tell our side of the story about events and experiences while we travel.  In our first article in the series, find out Dani’s perspective of our afternoon out at the colorful La Boca neighborhood of Buenos Aires and then read on to find out what Jess thought about this popular tourist attraction. 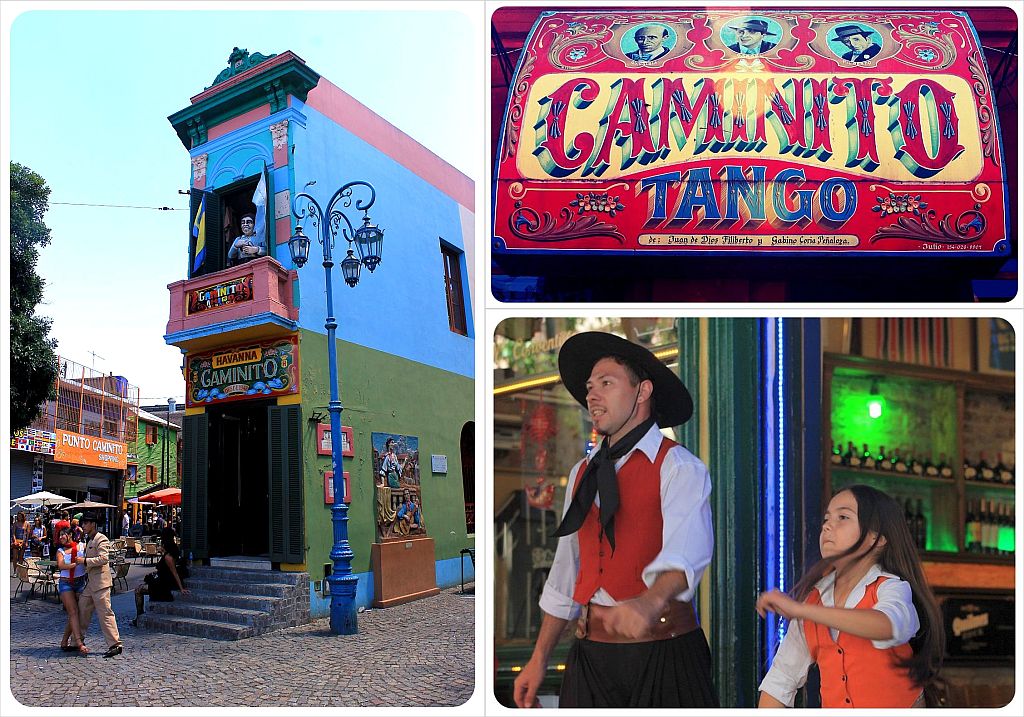 The images of the colorful houses in Caminito, an alleyway-turned-street museum in the neighborhood of La Boca, were some of the pictures that had stuck in my head the most when I was researching our trip to Buenos Aires. I knew that La Boca had been a working-class neighborhood during the 1800s, mainly populated by people who were employed at the nearby river mouth (‘boca’ in Spanish, hence the name) where a shipyard was located.

When the port was moved, many people also left the neighborhood, leaving houses abandoned, particularly around El Caminito. An artist who lived nearby started to paint the fading houses in the 1950s, laying the groundwork for what Caminito is today: a street museum, combining colorful houses, tango music and platefuls of steak. La Boca had very few visitors just a few years ago, but nowadays it is filled with busloads of tourists at all times. I didn’t care about it being touristy, the colors of the houses are a photographer’s dream and I knew I wanted to visit Caminito. 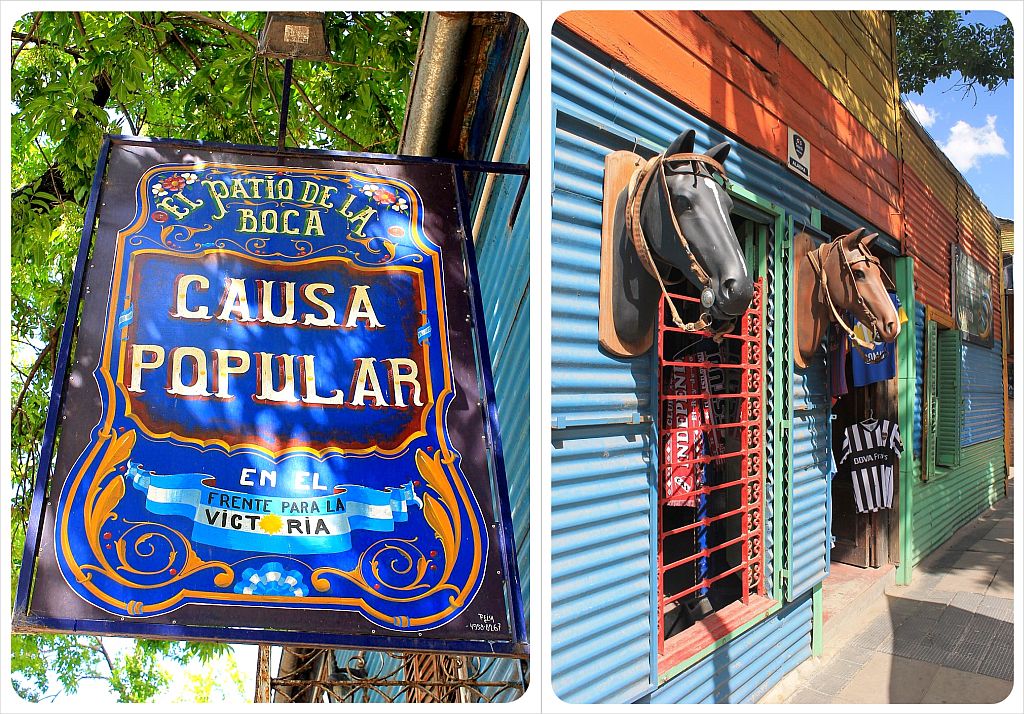 The minute we got off the bus in La Boca I realized how much more of a tourist trap El Caminito was than I had thought: tango dancers were staging for photos in front of the restaurants, and even props for tourists to take their photo in ‘tango gear’. Cheesy photo walls where visitors can stick their heads through were lined up along the Plazeta de los Suspiros, market stalls selling tourist trinkets were set up, and eager waiters tried to divert us into their restaurants. 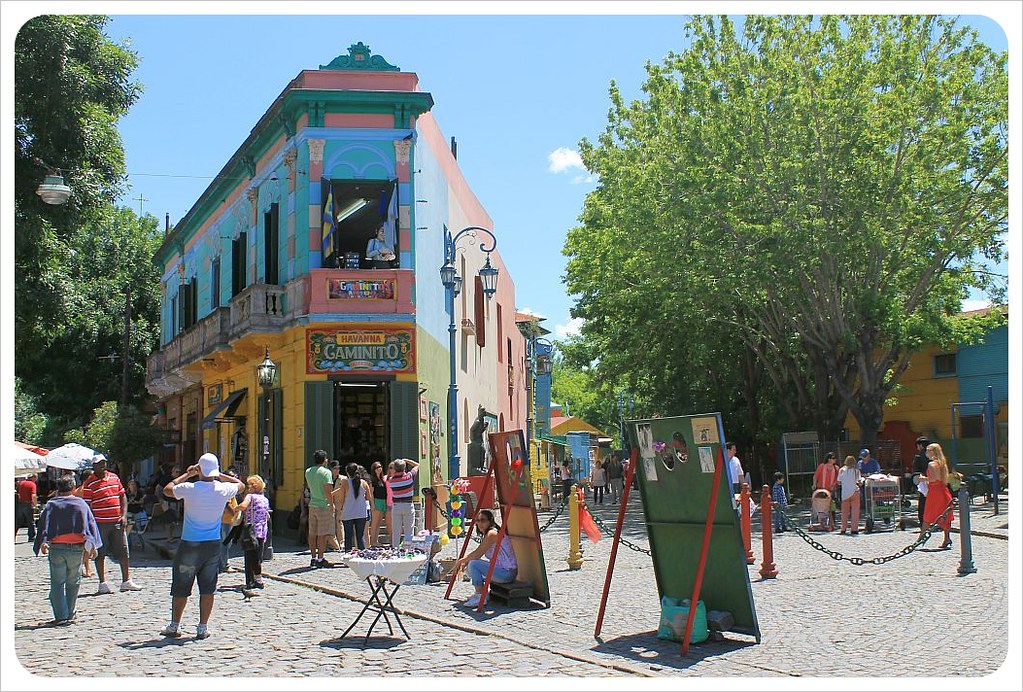 I guess that I would have been disappointed about how ‘set up’ everything felt had I not known what to expect before I went. Instead of letting the tourist circus bring me down, I decided to focus on what I came here for: photographing the colorful houses. We were visiting on a perfect spring day with blue skies and lots of sun, and it was a glorious day to take pictures. 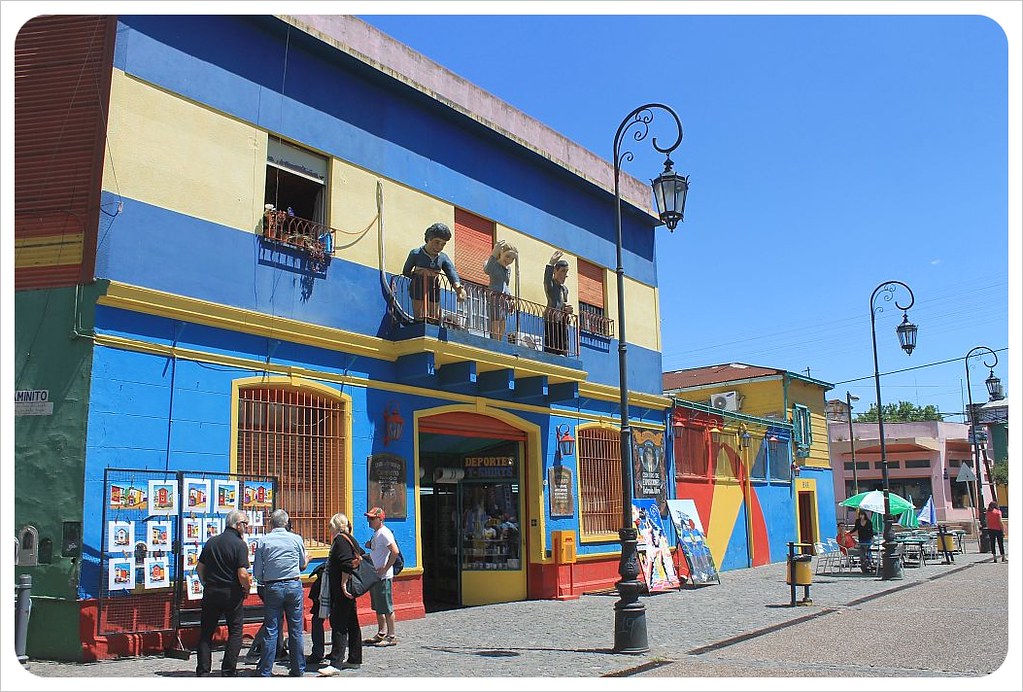 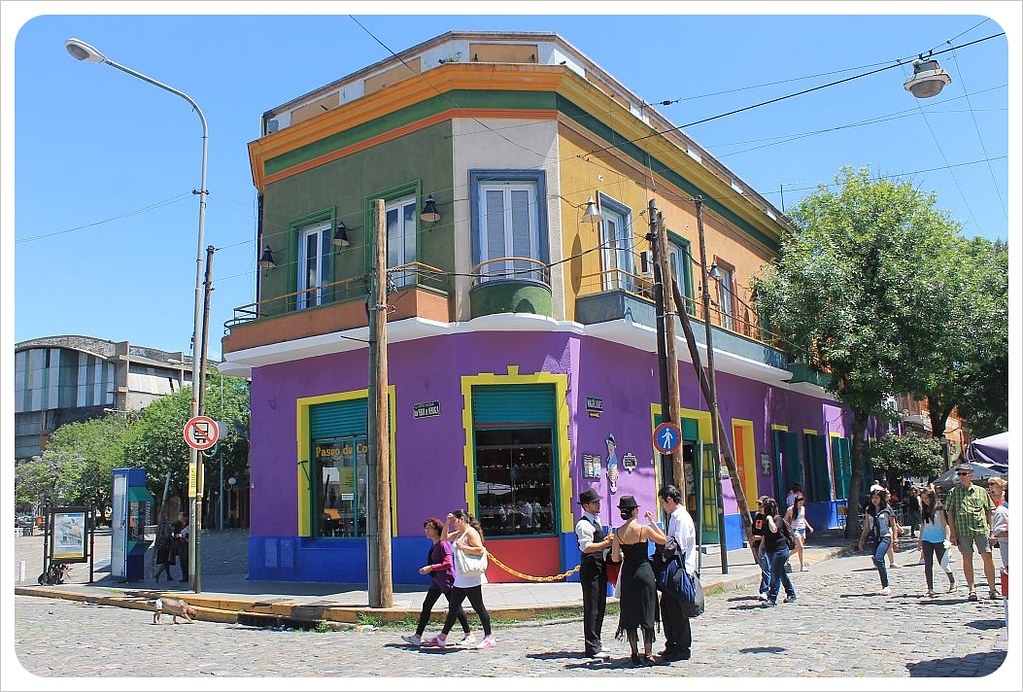 Later, we sat down in one of the restaurants to watch one of the tango shows that were on in every single restaurant along Magallanes, the main road off El Caminito. Every single restaurant offers two things: a little stage where tango dancers entertain the tourists, and steak. I opted for a coffee instead and even though we knew how touristy the whole thing was (nowhere else in Buenos Aires you walk by a restaurant during the day and see tango dancers), but we saw the best Argentine tango to date. 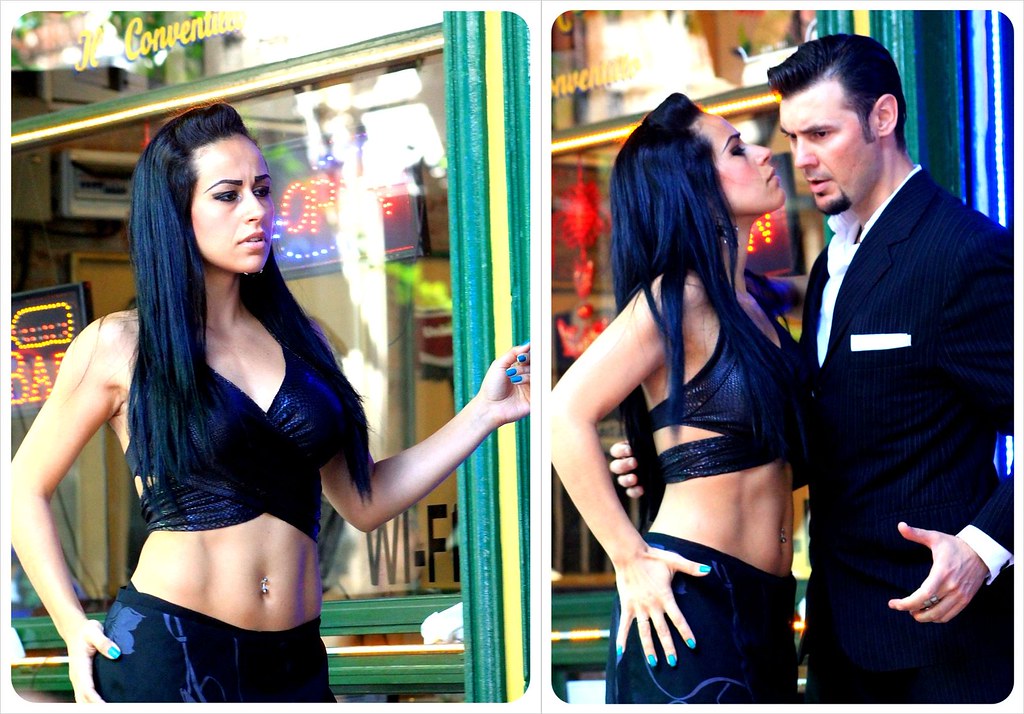 We were about to leave when I remembered that I had read about a small modern art museum, the PROA, in our Buenos Aires bible: For 91 Days in Buenos Aires

. The renovated building with its glass front stands out from the rest of the buildings along the Avenida Don Pedro De Mendoza, right across the river mouth, and at only 12 Pesos ($2.50) is well worth a visit. You shouldn’t leave without visiting the café on the second floor, which had some fantastic views over the river and after a quick glance through the menu we wished we would have come hungry.

My tip: I would still recommend a visit to La Boca, even though it is touristy and does not reflect the true Buenos Aires in any way. As long as you know what you’re in for, you can still enjoy a stroll around the neighborhood, maybe pick up a couple of souvenirs and watch some tango. 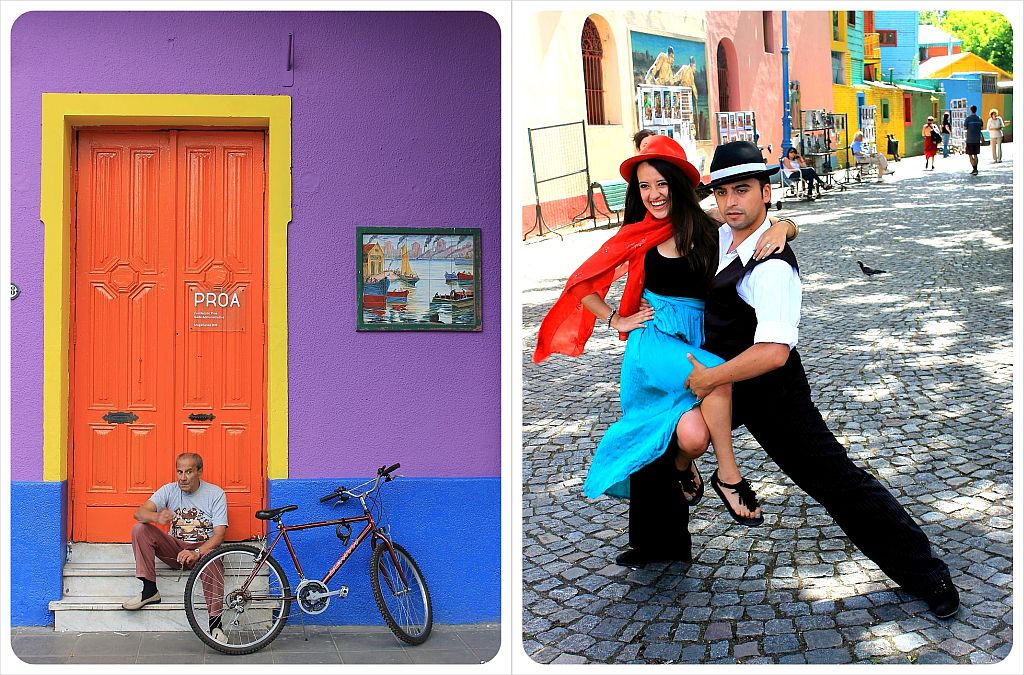 Meh. That’s pretty accurately described how I felt on the bus on the way to La Boca, just outside downtown Buenos Aires. This was definitely more of something Dani wanted to do, but I allowed myself to be dragged along because a. it was a beautiful sunny day, b. we were going with friends and finally c. sometimes I can be a bit too sarcastic or negative about touristy places and I usually find myself pleasantly surprised in the end. 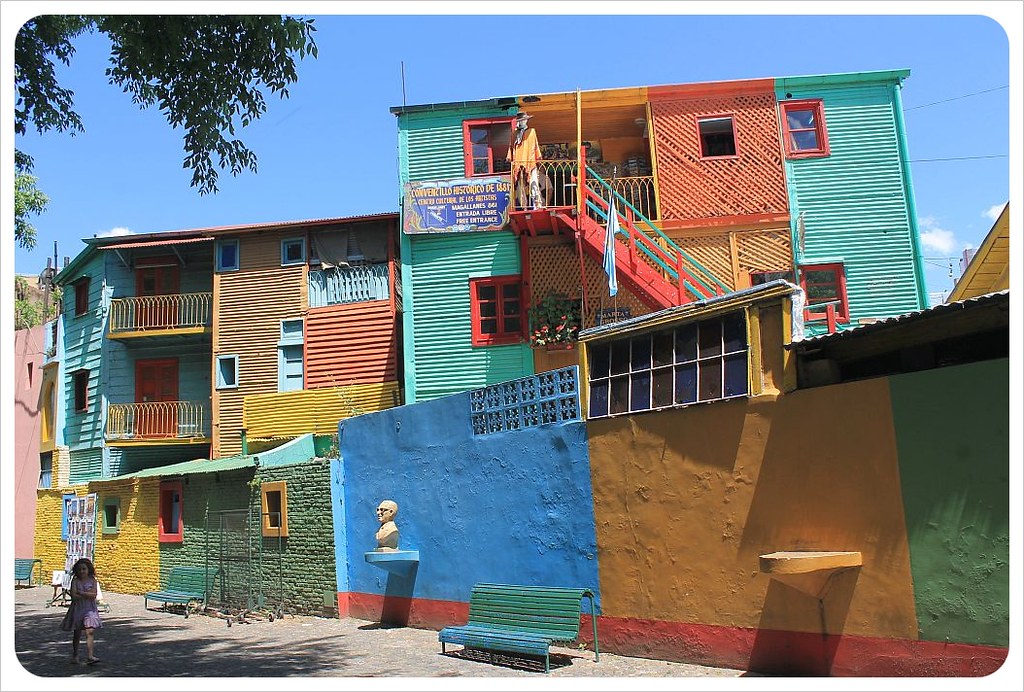 I knew about the colorful buildings, the tango and the story behind La Boca and the street called El Caminito. Culturally La Boca is a place where a large population of immigrants lived and worked in the shipyards. Later, when they moved away from the area, they took this newly-formed culture with them out into the wider context of Argentine identity.

Historically and geographically La Boca represented the strength of the nation’s trade and commerce and the entry point of development and growth in the New World in the 1800s. 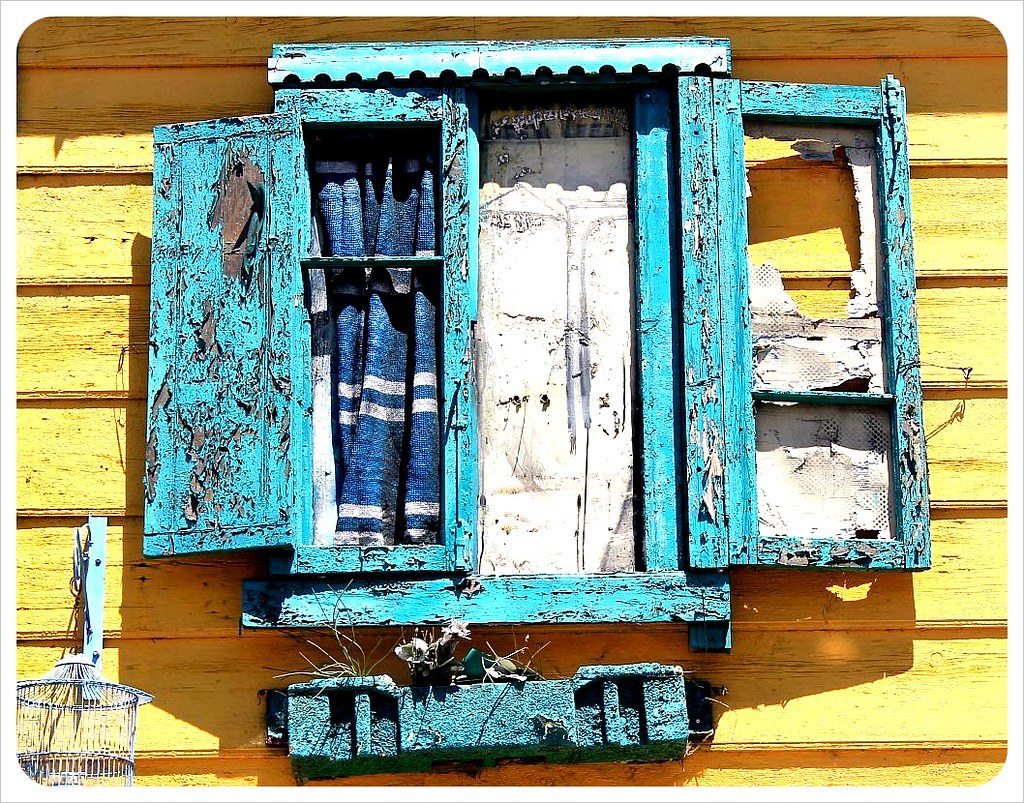 This is a fascinating story, but I find that could be accurately and compellingly told in within the confines of a museum: $10 entry, interesting exhibitions, maybe Tango shows on the weekends. Instead, while you could consider El Caminito an outdoor museum of sorts, it is the definition of a tourist trap and a caricature of its former self.

Hordes of people, both Argentinians and foreigners, shuffle along the streets lined with souvenir shops and overpriced restaurants taking pictures of people and scenes created purely for tourists to take pictures of. 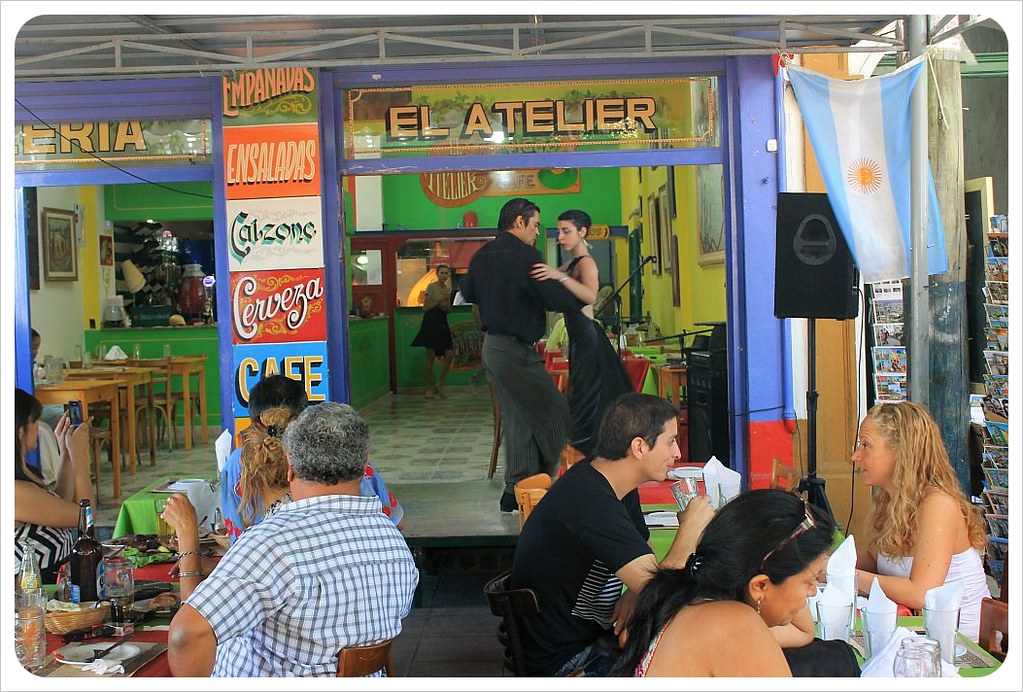 The restaurants all have low-rent tango shows available in exchange for an overpriced steak or $5 bottles of water. The truth is, I really enjoyed the tango. Maybe I was just admiring that stomach… or lost in thought imagining the life of a Tango dancer in La Boca.

How long do they dance each day? Are the dancers all trying to hit the big time, or are they just the owner’s cousin or nephew or neighbor working a job like the rest of the restaurant staff. 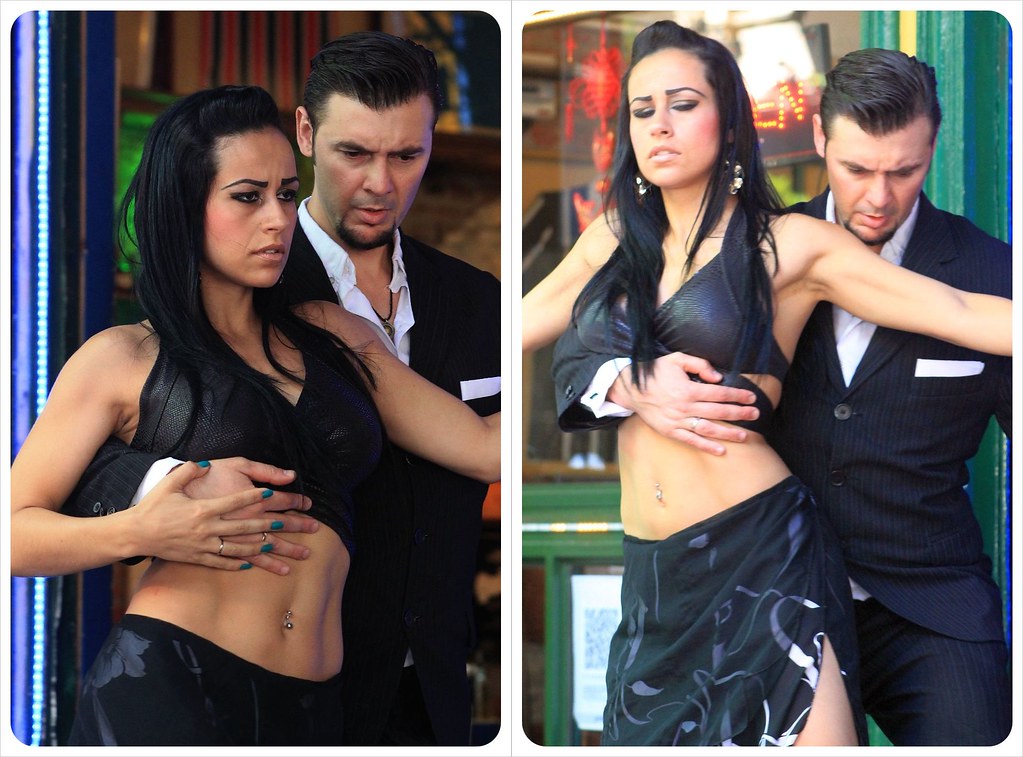 I’ll admit it – I also enjoyed the quick stroll, the colorful houses and the tango music, which always inspires me to want to write and paint and be fabulous (though not to dance, because I just can’t move my body that way!).

I still do not think La Boca is worth a visit. Maybe that is because I do not have a photographer’s eye, so once I have soaked up the situation, I will not notice those charming little details that Dani sees until I look at them later on her computer screen. I tended to focus on the fact that there is nothing authentic about El Caminito, so what is it that you are visiting? Plus, straying out into the surrounding neighborhood puts you in a rough area rife with robberies and crime (or so they say, nothing happened to us). 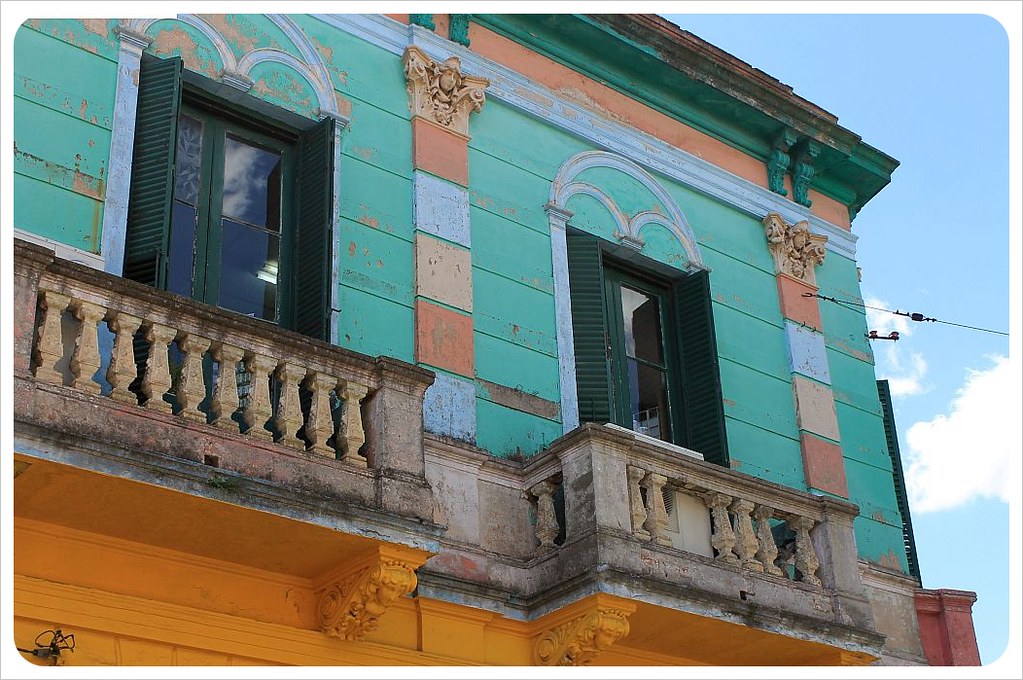 My Tip: If you, like me, find yourself agreeing to go to La Boca, make sure you spend time at the PROA gallery. It is the utter antithesis of El Caminito and I mean this in a good way: White walls, sharp angles, glass windows, intelligent art, clean bathrooms and a great view of the river. I wish I had known about the rooftop café, which has a menu of fresh, healthy food, good coffee, delicious-looking desserts and an outdoor patio with comfortable lounge chairs covered by big umbrellas reassuring you that you can stay here all afternoon while you wait for the others to finish shopping for refrigerator magnets.

A gourmet day in Adrogue: Cooking with Teresita in Buenos Aires