Nestled in a valley halfway between southern Germany and Northern Italy, the Austrian city of Innsbruck combines the rustic flair of the Alps with the Italian dolce vita lifestyle. This spring, we hopped down from Munich in under two hours, white-knuckling the steering wheel as we wound up, around and through the 3,000m snow-covered peaks of the Alps, and past cows and sheep grazing on the greenest grass we’ve ever seen in the fertile valleys below. On a visit to Innsbruck, the journey is truly as breathtaking as the destination. 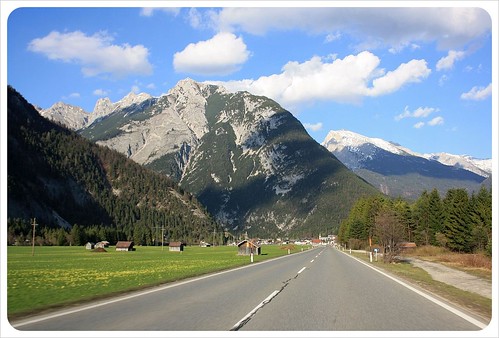 Although initially Innsbruck might seem like a quiet little town with its 120,000 inhabitants, the city tucks a lot of nightlife into that sleepy facade. Just under one quarter of the population is students thanks to two large universities, meaning Innsbruck is teeming with enough Austrian cafes, old fashioned pubs plus trendy bars and clubs to rival more populated European cities. 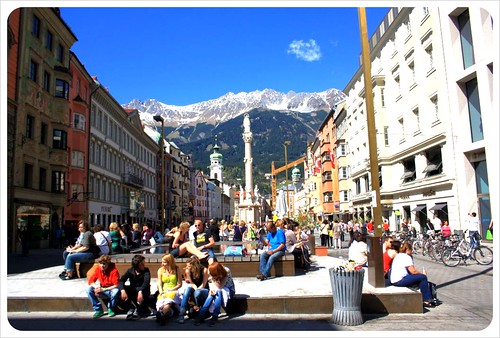 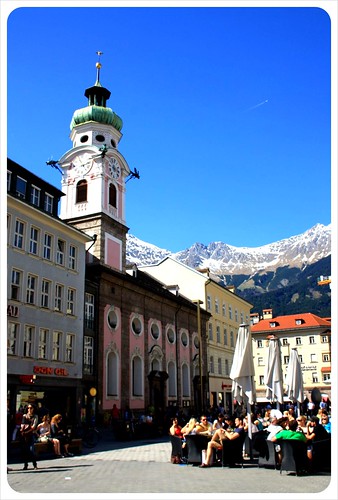 On sunny days, it seems that the entire town heads outside to spend time under the big blue mountain sky. Parks, such as the lovely Hofgarten (Imperial Court Park) are filled with picnicking couples, outdoor seating at cafes and restaurants is completely packed and the pedestrian-only Maria Theresien Street, in the middle of the city’s shopping mile, is spilling over with people sampling the local Stiegl beer or the popular ‘Spritz’, a drink which looks like orange wine from afar, but is actually a mix of Aperol orange liquor and white sparkling wine. 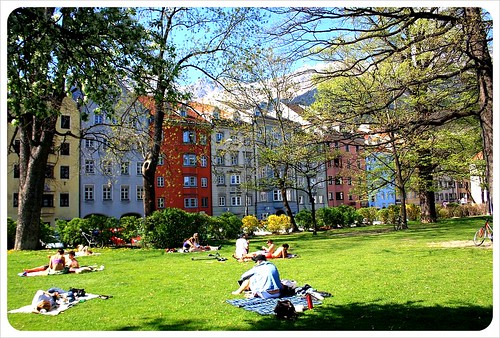 Although surrounded by imposing Alpine peaks, downtown Innsbruck itself is very bicycle-friendly, with residents preferring to cycle around town rather than taking their cars from the short distance from A to B. Rent a bike and gulp down buckets of fresh mountain air riding for miles on the flat path along the river ‘Inn’, which slices right through town, and after which the city is named. Innsbruck literally means ‘bridge over the Inn’, with the name of the river, Inn, and ‘Bruck’ coming from the German word Brücke meaning ‘bridge’. 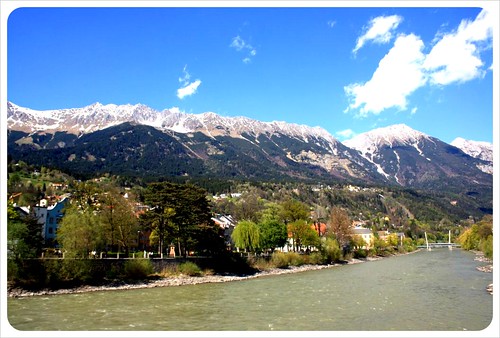 The city’s compact size makes it easy to explore on foot. The impressive dome of the baroque St Jacob Cathedral, which can be seen from a good distance, is the center of the Old Town, and leads to a truly magnificent interior, definitely worth a visit. 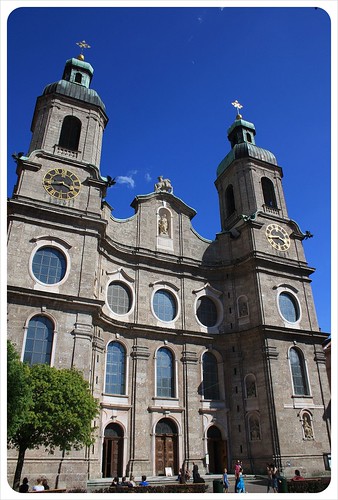 Another baroque highlight is the Hofburg, Innsbruck’s Imperial Palace, which features a great collection of portraits of the Emperor Habsburg and his family. Innsbruck’s biggest tourist attraction is the ‘Golden Roof’, built by Archduke Friedrich IV in the 15th century. The city-center building was the residence of the rulers of Tyrol, with the 3rd-story balcony capped with 2,738 gold plated copper tiles for Emperor Maximilian I to serve as a luxury royal box where he could enjoy tournaments in the square below. 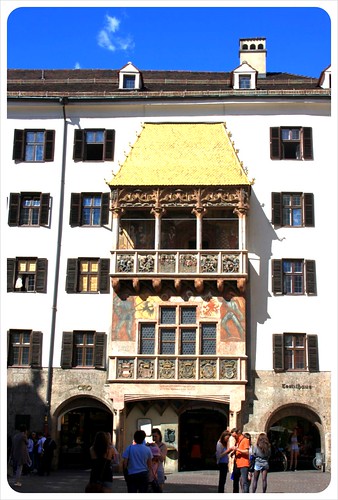 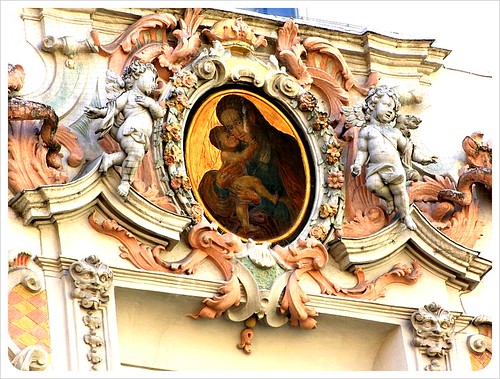 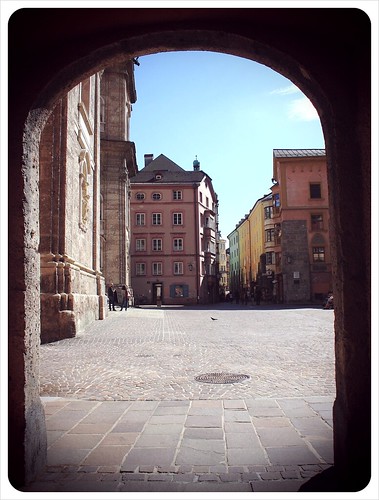 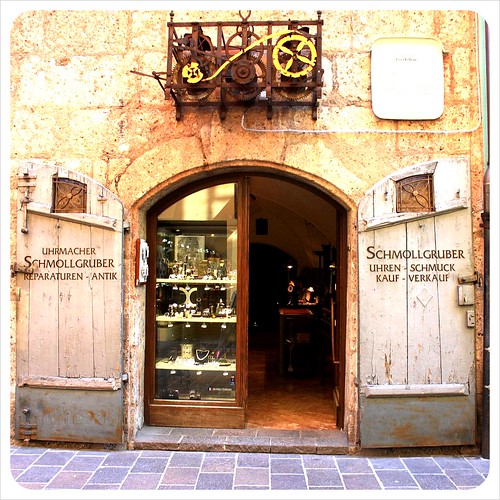 In addition to the must-try Mozartkugeln, make sure to sample plenty of Austrian pastries such as authentic apple strudel or Kaiserschmarrn, which is a sweet pancake, sliced into pieces and covered in powdered sugar and raisins. Austria’s proximity to Italy means that in addition to typical Austrian favorites, world-class Italian food (and wine) is readily available, from mouthwatering pasta and pizza eateries to gelato shops with lines of locals around the corner. 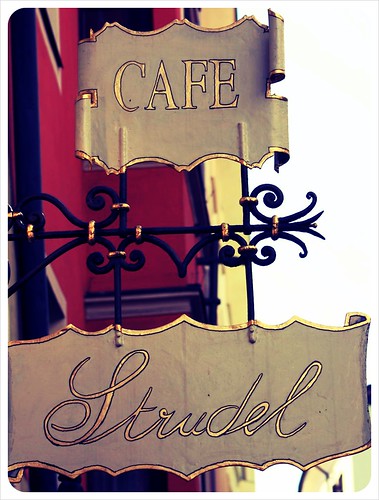 While the historic town makes for a fabulous city escape, Innsbruck is best-known by winter sports enthusiasts as the host of the Winter Olympic Games (twice!), and home to the sky-tickling Bergisel ski jump, which hosts jump competitions like the famous annual Vierschanzentournee, and is a tourist attraction in its own right. Non-skiers should make the trip to the super-high ski jump, as a trip to the top offers amazing views of the Alps and a birds eye view of downtown Innsbruck below. 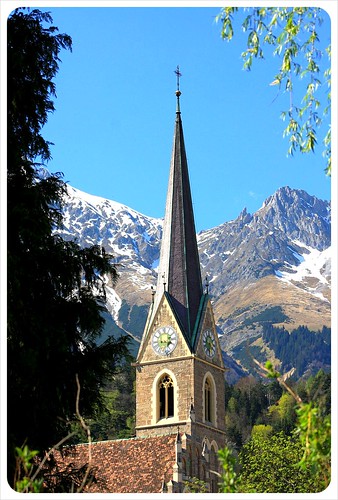 Even in summer, skis and snowboards are strapped to the roofs of cars or under the arms of bike riders either heading up the mountain or just returning from a day on the slopes, as the glaciers surrounding Innsbruck offer year-round snow to winter sports enthusiasts. Just outside of Innsbruck, several world-class ski resorts stay open all year. For the skiers and non-skiers alike, dozens of little spa towns dot the Innsbruck countryside, making this area perfect for spa breaks – especially as Austrian spa facilities are some of the best in the world. 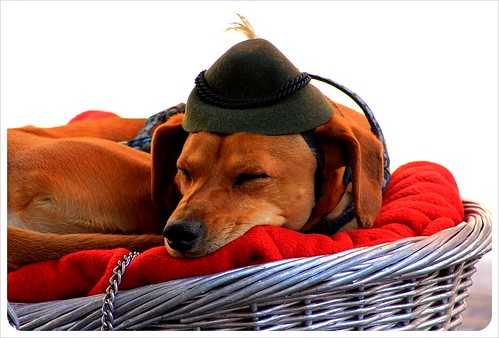 Share a skill, help a community in the Dominican Republic